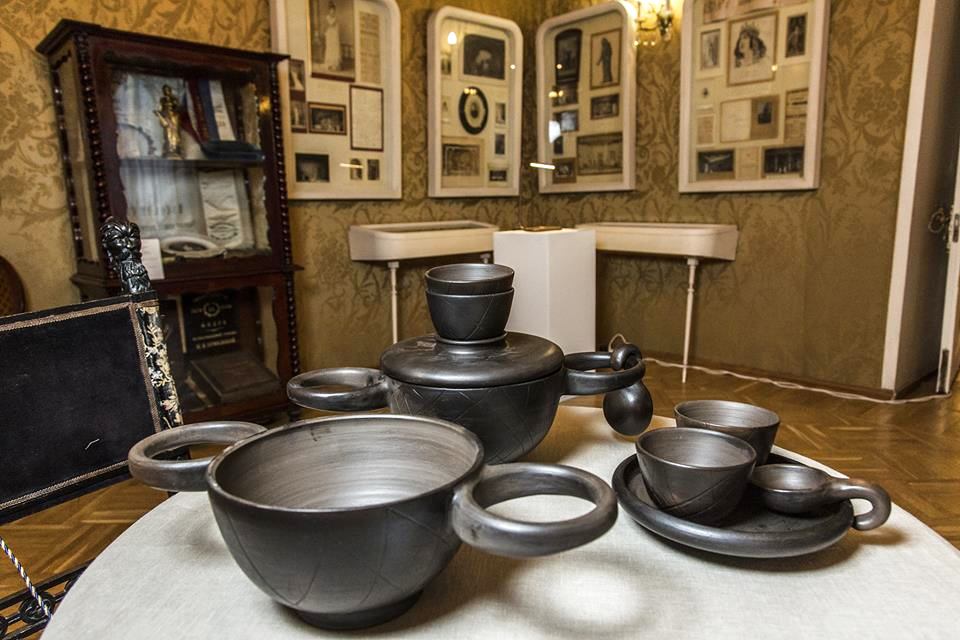 Perhaps the most interesting items madeyoung Russian designers were shown at this exhibition. Visitors learned about their creators and were imbued with the spirit of national design. And the things are really wonderful The second exhibition “Subject. Contemporary Russian Design ". The mansion of the 18th century was filled with things invented and made by people who are not yet thirty years old. Most of the participants have behind them European exhibitions, publications in prestigious publications, and some have their own production. Many, like the authors of the idea, the curators of the exhibition, Ekaterina Tulupova, Olesya Sitnikova, having completed their training in Milan, London, Madrid, returned to work in Russia. What do these young and daring ones offer the world? Let's see together.

1. The Hill of Hills

Petersburg designer Anna Druzhinina - one of theParticipants of the project Izba, who impressed the tempted audience of Milan iSaloni in April this year - made the original gizmo. Through traditional decoration Russian rustic bed - Hill pillows as dolls, folded and smaller than the cross-linked - Anna Druzhininoj turned original puff-slide Pillow hill (podushkovy Hill). 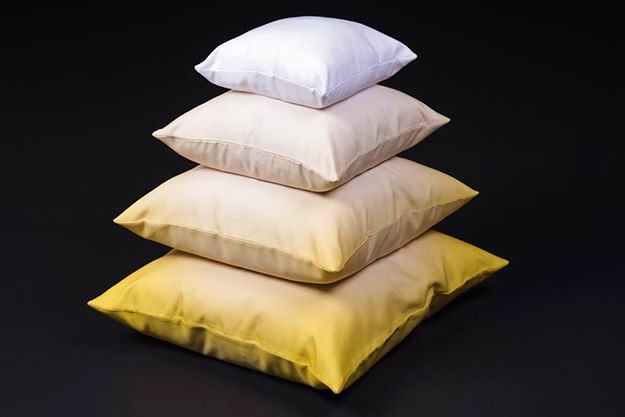 Table-stand Ero owner of MoscowLLLooch company Leonid Lozbenko changes the idea of ​​the usual texture of objects. The table top made of natural Greek Skyros marble is so thin (4 mm) that it resembles a gramophone record crowning a whimsically broken stainless steel leg. The beauty here not only saves the world, but also serves as a distraction for the USB port built into the table leg for recharging any gadgets. A graduate of London's Central Saint Martins College of Art and Design, Leonid could not realize his ideas in third-party companies, he had to open his own. The union of like-minded people LLLooch successfully "leads" its objects from idea to consumer, combining style, intelligence and convenience in gizmos. The founder of LLLooch Leonid Lozbenko: - To achieve a good result in mass production, you need to set absolutely clear goals and follow the plan. Business planning, working with people take 80 percent of my time. The remaining hours go to creativity and the direct creation of objects ... We in no way try to specially make things in the Russian folk style. There is even a crossed out nesting doll on our courier car. I believe that Russia has something to show besides kokoshniks. And the national style in subjects manifests itself by itself. Many of our things, for example, are made of Russian birch. LLLooch.ru The Light Bean pendant lamp turned out to beMoscow designer Katya Kopytina thanks to the idea of ​​making the lamp an equal part of the design. She wanted something simple, as clean as possible, but with character. Indeed, the bob lamp seems to roll out of the oak cartridge, willingly demonstrating itself to the world and in no way betraying the presence inside the ventilation system, which does not allow the cartridge to heat up. Having received a Master RSP degree from the Istituto Europeo di Design (IED) in Milan and completed an internship at renowned European companies, Katya professes the idea as the basis of design. According to her, she endlessly modifies everything that surrounds her in her head: trash bins on the streets, shops, bus stops, washing machines or cans - everything must be comprehensible and eventually become objects of design, form culture. Light Bean quickly found acceptance from design experts and the public. And despite its laconicism, it perfectly took root in the interiors of the capital. Katya Kopytina, designer: - I am constantly thinking about how I could improve everything around: from the garbage dump to entire districts. Here we are not so much talking about industrial design, but about the logic of the structure of life, everyday life, and even thoughts. The problem is that the overall level of design grows with the crowd. Therefore, everything is progressing slowly. But now there is a rapidly growing number of people who understand the value of this topic. Design in the broadest sense of the word is not just pretty lamps and unusual furniture. Design is design, comprehension. katerinakopytina.com Vladimir Ivanov from Kemerovo believes that the mainthe designer's task is to surprise, to offer a person something different from what he sees in stores. And he succeeds quite well. Milan, Florence and Moscow continue to marvel at and praise his work, such as the Dream two chair with an unexpected centering lamp, made for the Dreamer cafe, and this chair as if invites you to break away from the seat and rush up the stairs. Vladimir brought a mat, a seemingly ordinary wooden panel that hides an invisible magnet, to the Subject exhibition. With the help of other magnets, you can scatter any selfies, vacation photo reports or valuable instructions to loved ones on the surface of the mat. Elegant simplicity without fuss, but with a twist, makes him akin to IKEA, and Vladimir thinks it would be cool to be the first Russian to sign a contract with her. 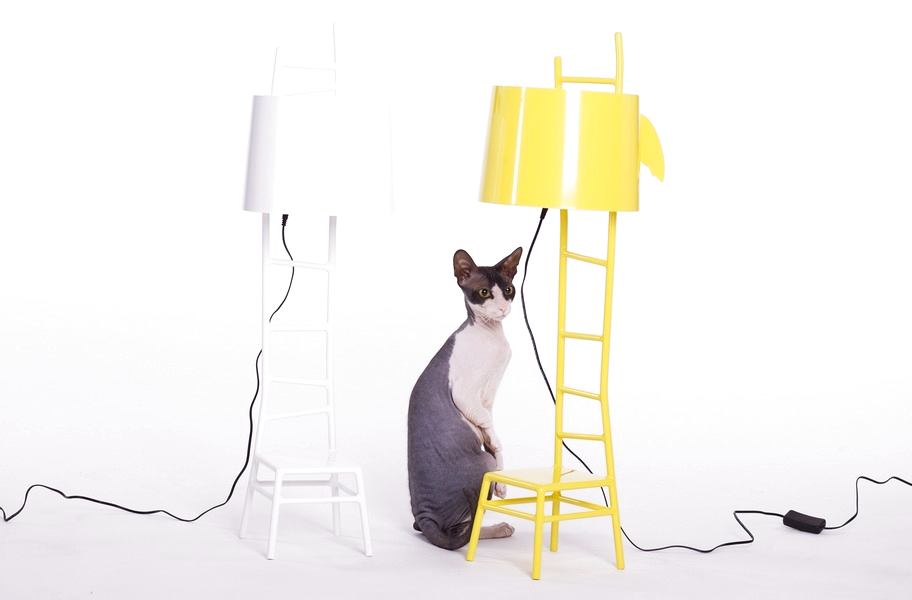 Crowned, despite youth, internationalRecognition and award-winning designer of St. Petersburg Yaroslav Misonzhnikov, the generator of the project Izba, enriched it with two subjects. One of them is a fun wooden wooden rocking chair, "grown up" from a musical rattle. The second subject from Yaroslav in the project -Candlestick, where the position of the candle can be adjusted by means of a scale and a holder. A glorious mix of Slavophilism and Eastern graphic art came out. Only recently Yaroslav took part in the London exhibition "Born in the USSR", adding to the solid "printed" list a collective publication in the magazine Wallpaper. However, his main dream remains the idea of ​​making a collection of porcelain for the St. Petersburg Imperial Factory. On the first education Jaroslav ceramist. And the patriot of Petersburg, of course. Another character of the project Izba, so belovedMilanese audience - print for fabric "Rusalka & Rusal" of Moscow designer for fabrics of Sveta Gerasimova. He refers us to Pushkin's Lukomoryu, Mitki, a mixture of the Russian epic and naive simple-hearted art. 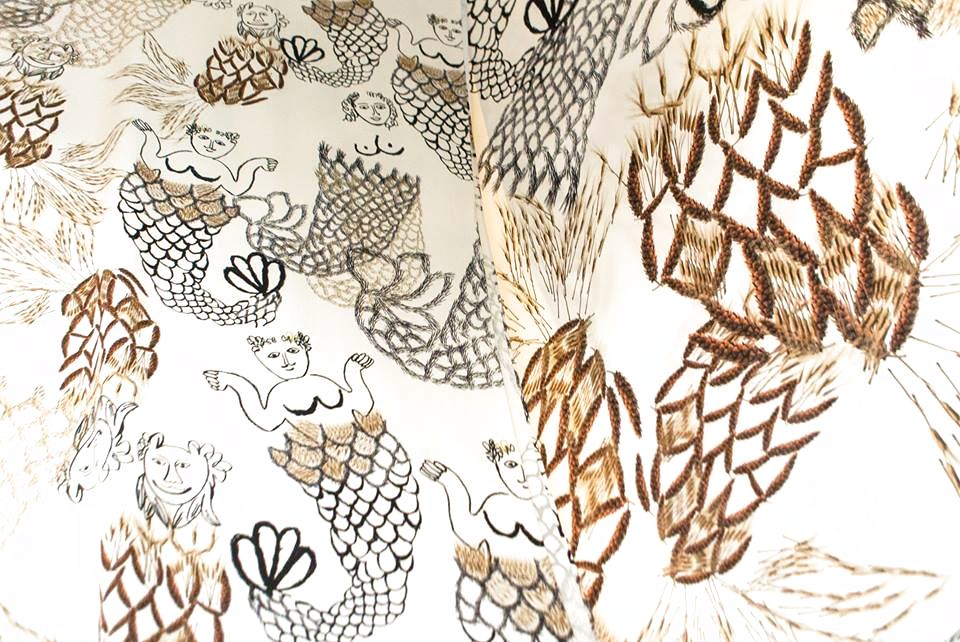 Wooden stand for a laptop of one ofThe founders of the St. Petersburg studio Plan-S23 (furniture design, interior decoration) Alexei Galkin caresses the look of smoothness and completeness of forms, and it is composed of a fairly large number of parts, carved with a computer program. Coupled together, they are a patented product and give an excellent effect, providing a comfortable height and distance from the eyes to the window on the Internet. 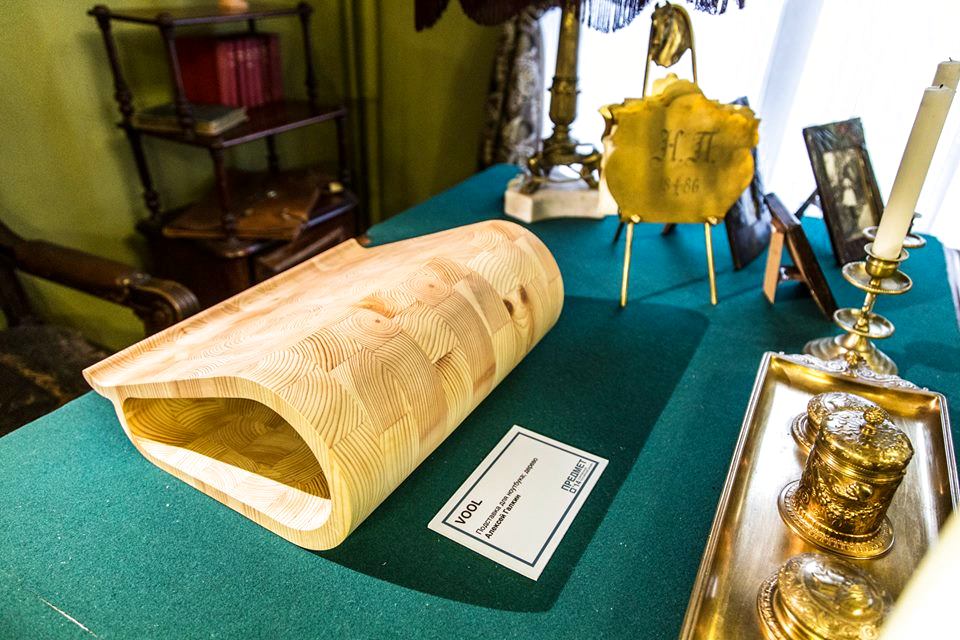 Furniture company Field & Rage creates inMoscow furniture and interior items are exclusively handmade. Such are the mirrors "Delta" in a triangular frame made of oak. A slightly tinted mirror surface gives a nostalgic smoky-scattered picture, and a bonus is a light tan at any time of the year. Triangles are easily compiled into any collages, extending the possibilities of a mirror decor to infinity. 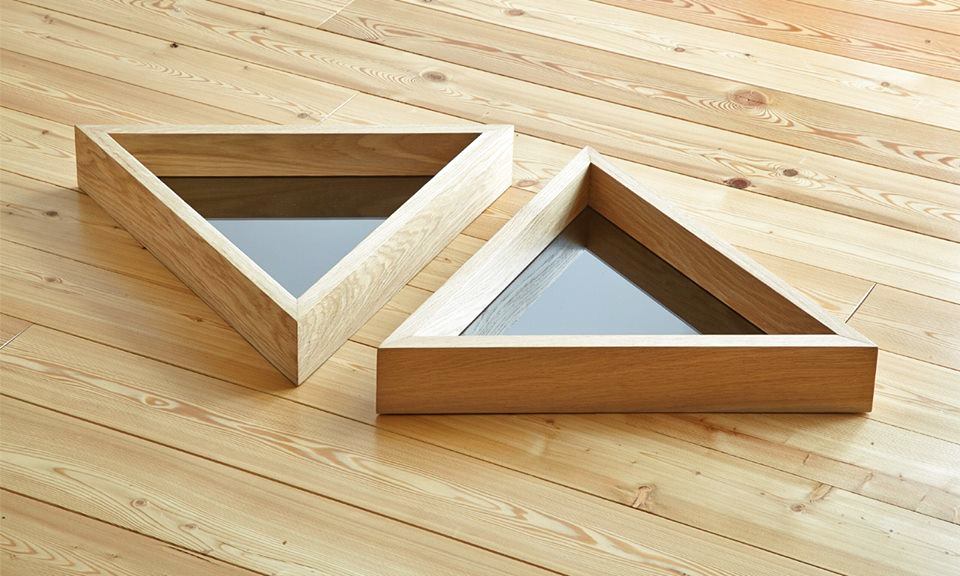 Ceramic tableware "Cheburashka" from a graduateIstituto Europeo di Design in Madrid by Lera Moiseeva, her co-author Luka Niketto and the manufacturer (Suzdal workshop "Dymov Ceramics") have already visited Milan Design Week 2014 in April. molded on a potter's wheel, polished to a shine with a stone and fired twice in the oven. The dishes not only allow air to pass through and perfectly preserve the product, but are also very friendly - objects interact combinatorially, easily integrating into one another. By the way, the name itself - Cheburashka - in Russia meant "fishing float".

The very principle of placing innovative objects onthe background of the interior of the noble nest justifies the main idea of ​​the exhibition. Design is the relationship of a person with an object. When they are personal, sincere and meaningful, such items are organic both in the feast and in the world. Ekaterina Tulupova, curator and author of the idea for the Subject exhibition, co-owner of the Arch. Subject ": - The key style in interior design of the last quarter of a century is eclecticism and fusion, a mixture of old and new. The concept of the exhibition - modern design in historical interiors - was born from the understanding that a real house is being formed gradually, bearing in itself the connection between generations and times. Modern items in the memorial house-museum, on the one hand, look unexpected, and on the other hand, they harmoniously combine with antique furniture. arch-predmet.com Olesya Sitnikova, co-author of the idea, curator of the Subject exhibition, co-owner of the Arch. Subject ": - The time of crisis is very productive for design. Milan became a trendsetter in world design after World War II. At such moments, it is important to create a new one, as they say, from scratch, based on the conditions of a meager start, to use old or use new economical materials in a new way, in a word, to optimize production as much as possible. True design comes from lack, not excess. This exhibition, which we hope will become traditional, was born in part as a reaction to the stress of studying in Milan. We looked around and decided - it's time to unite and declare: there are Russian designers. Yes! They exist! arch-predmet.com 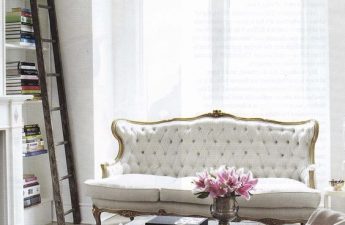 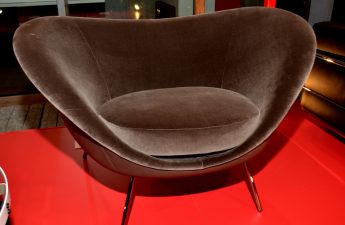