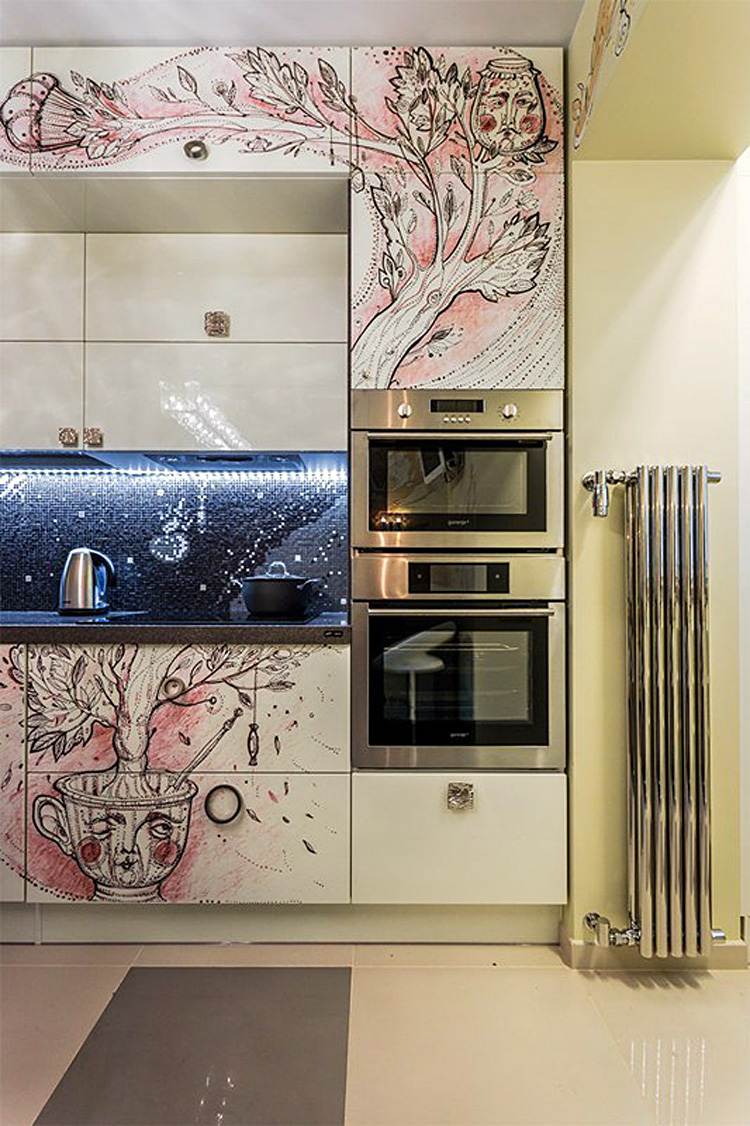 Today's winner among kitchen designsbecame the kitchen, prepared for the transfer of "housing problem". The author of the project is Anna Smirnova. On an area of ​​10 meters, she managed to accommodate both the kitchen and the dining room with a living room, and even to attach a workplace. 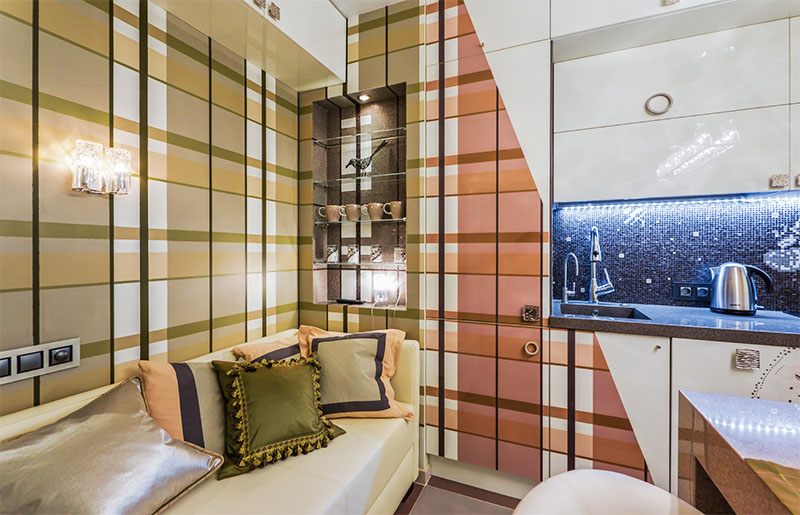 How much has happened on this blue and yellowkitchenette over the past decade. She had already worn out in all senses, because she had gone through the pogroms of the domestic chinchilla. Visited her and DPS, plywood has deteriorated, and the nails just began to fall out. But all is not lost, as a true professional works. Thanks to her renovation work, the room began to shine with new colors. 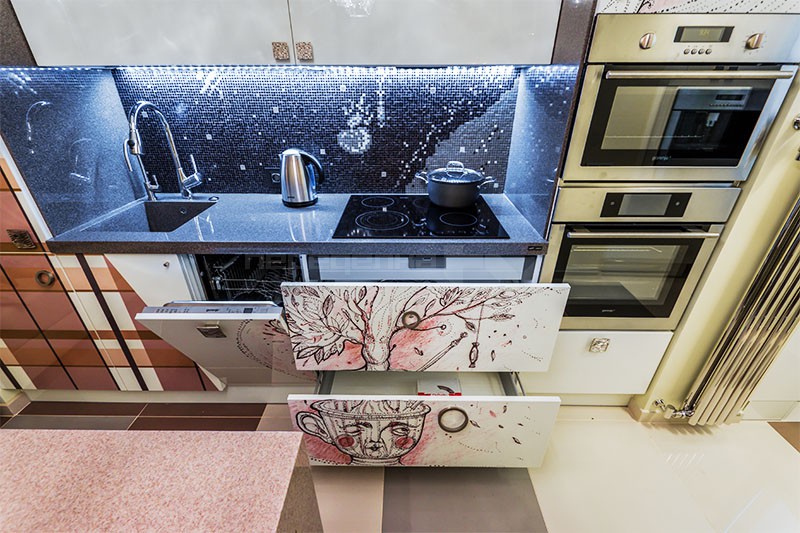 Historically, the fact that the most importantevents unfold precisely in this room. No one knows for sure why. Because of the crowdedness or the desire of people to be warm and well fed. Although there seems to be enough space in modern apartments, and hungry times no longer bother. But it does not change that way, because everyone needs a warm hearth. 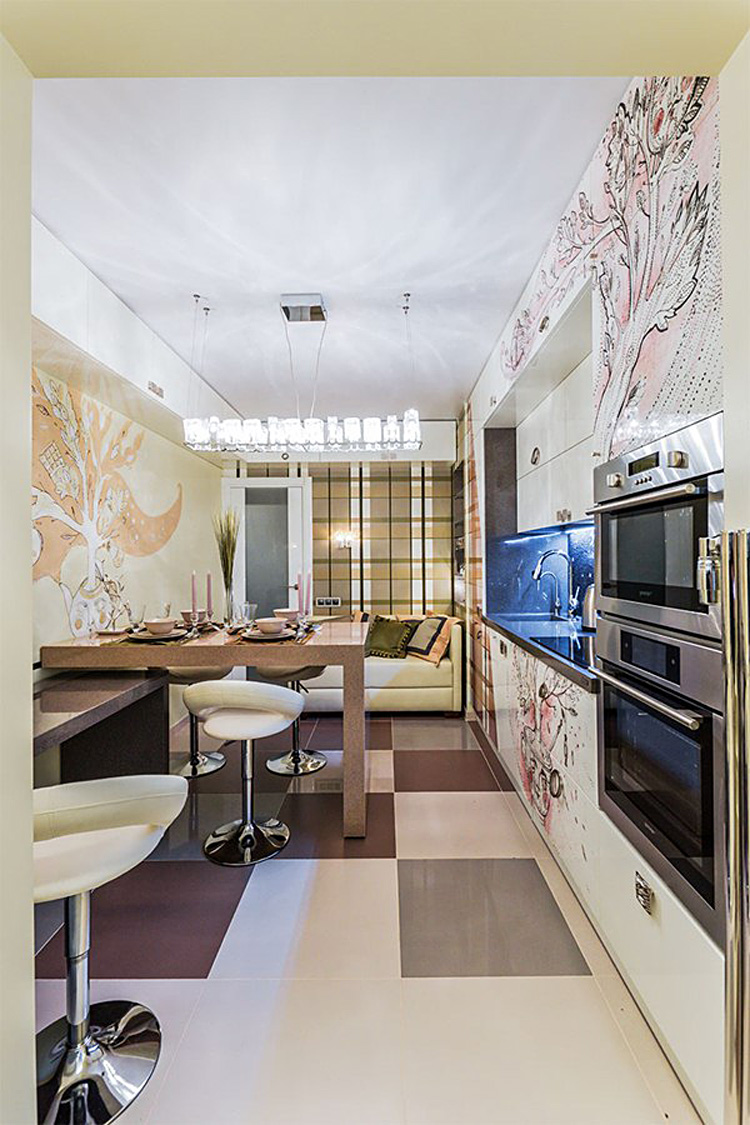 This tradition has not bypassed the heroes of the program,who, having in their hands a three-room apartment, no matter what comes to family gatherings in the kitchen. There they cook and look at homework, and feed all the family members. As a result, the author faced a rather serious question, since she had to turn 10 square meters into a kitchen, a dining room, a living room and a working room at the same time. That's why you need to be as efficient as possible.have territory. A very good surprise was the opportunity to add a loggia to the kitchen. The fight went for any free piece of the area, as in the area for the risers even appeared a niche. The apartment dwellers really wanted not only a sofa and a TV, but also modern accessories, and also in a convenient place, as well as a table where the owner could work. The final result was the surface, 180 cm in size, which also included a plate and sink. However, one dining table has a height of 90 cm. It serves as a place that can be used for cooking. The chairs also have the ability to change theirheight, for this purpose in their design made elevators. All tables have wheels in order to move them freely around the kitchen. Anna also worried that there would be a sufficient number of mezzanines and cabinets, which are placed along the entire length of the room. Their white colors make the space very light. With the help of a ladder that hangs on the wall in the loggia, you can reach to any desired cabinet. 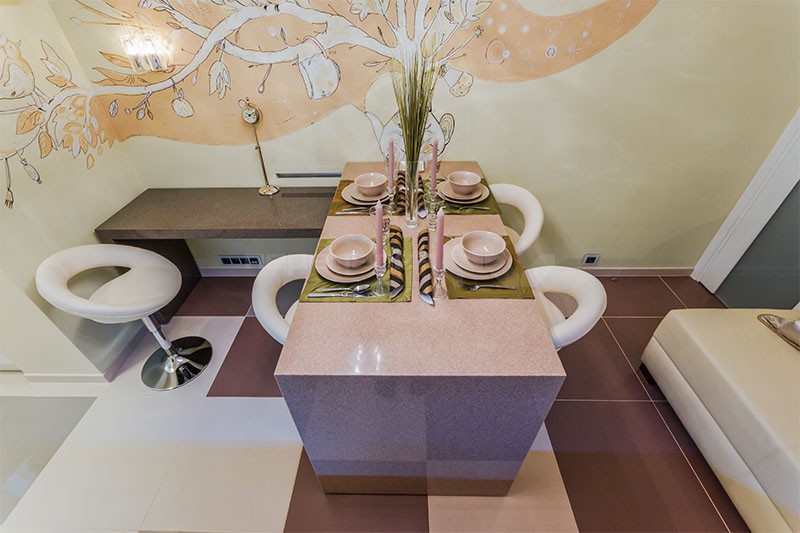 We were looking for a place for a coffee machinediligently, as he did not have enough space in the main kitchen, and the depth of the loggia was also too small. And this is how a simple thing appeared, which comes forward when needed. 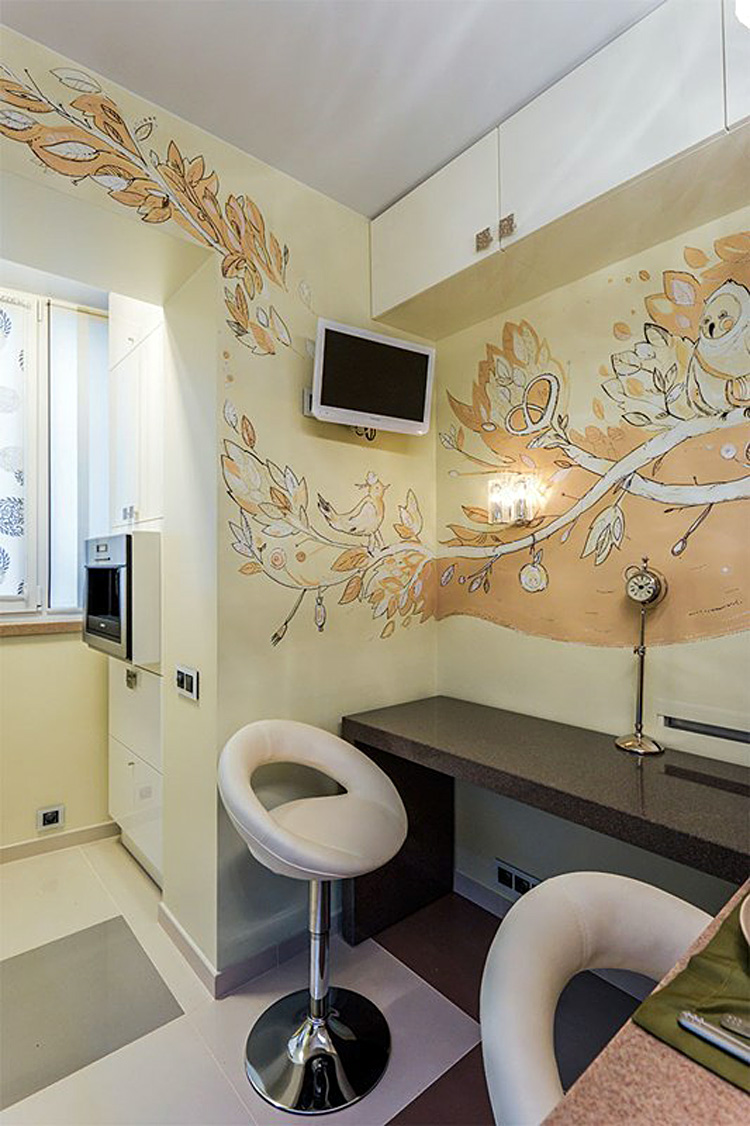 The color of the kitchen was chosen white, which at the firstLooking straight away, I want to decorate and cheer to divide the territory. The sofa with a refrigerator was separated by a checkered pattern that symbolizes the male lobe. A workplace, a stove and a table for notebooks are decorated with a wall drawing of a fairy-tale tree that arises from a kettle. He came up with Lisa, who is the designer's daughter. The twigs are inhabited by rather unusual and wonderful heroes. This is an owl carrying a bag and a seagull dressed in jeans. From the branch really want to rip a chocolate or candy, so they are appetizing in appearance. Pears hang on a string. This place is suitable for all romantics, especially female. 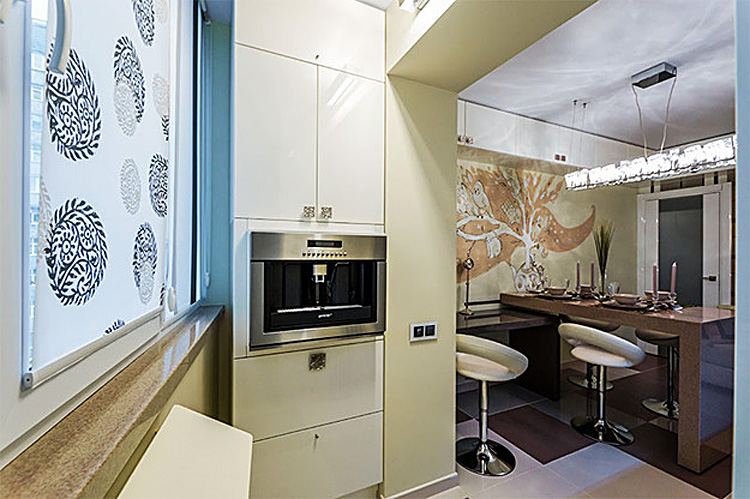 Much effort had to be spent on casting.ideas into reality. Half of the design of the facade was applied using devices, while the rest was painted independently. In addition, the colors of the final version could only be found last. However, the efforts of Svetlana, working in a kitchen factory, and Anna's collaboration, did not go unnoticed, since the project was a success. 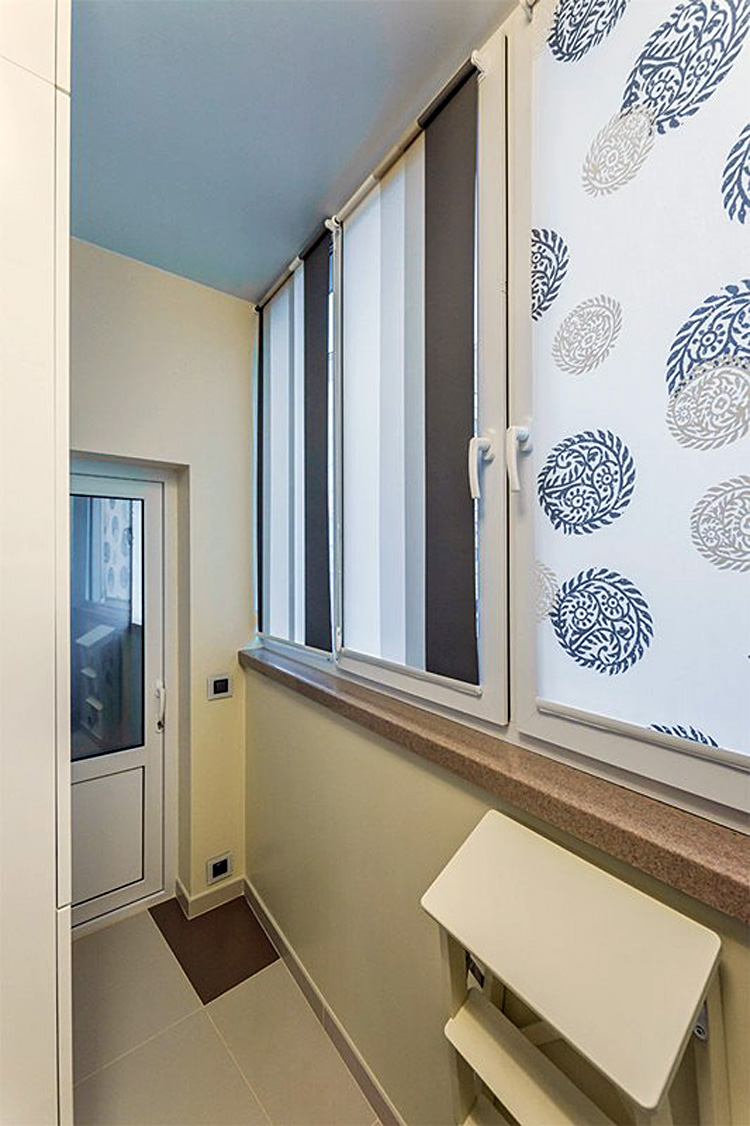 These are not all pleasant things, since they lurkedanother apron mosaic texture. He was made in accordance with the sketch of the author, so most of the work performed by hand. Mosaic had to be carefully collected bar by bar. Small difficulties also arose with the Italian chandelier made from glasses. The end result, of course, did not leave anyone indifferent.

26-meter flat from plywood, which evokes love for small-sized

Project of the week: the impossible is possible! 25-meter apartment

Kitchen interior: 4 steps how to make it stylish and functional

Are you going to have a haircut? Hairdresser with history and design

Designer apartment in Scandinavian style: a small studio with a stylish interior 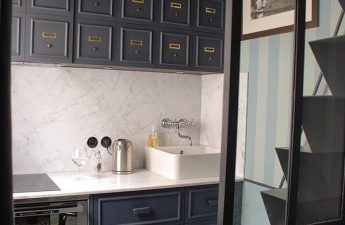 The classic design of a small kitchen: down with the excesses 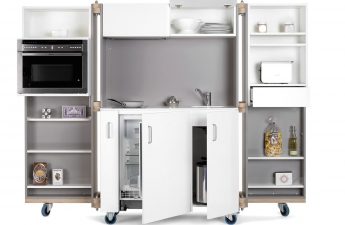 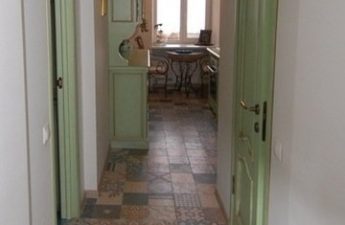 The interior of a small kitchen in the Moroccan style