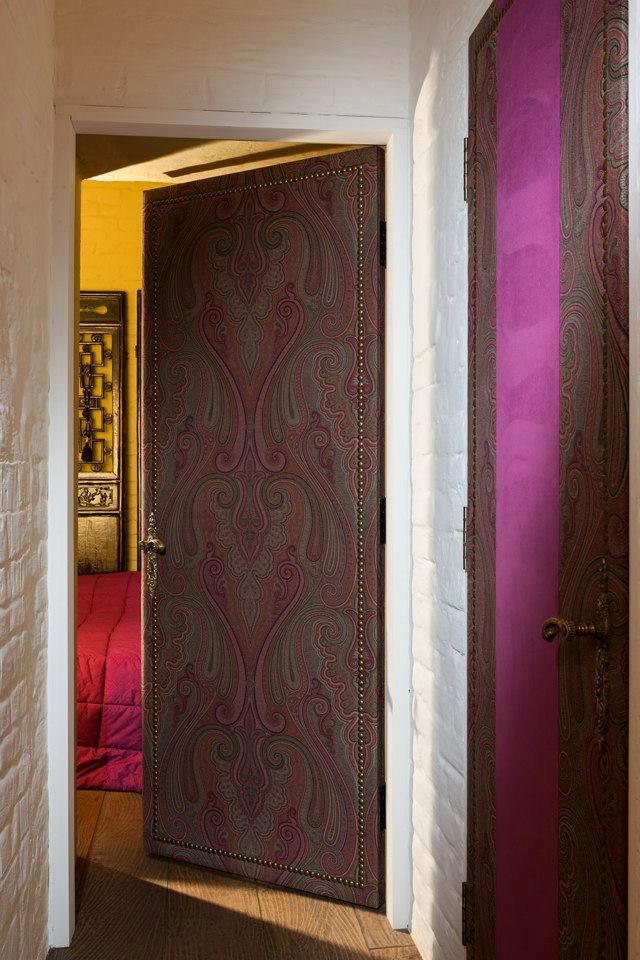 If you think the style rustic is rustic andToo rustic for a city apartment, then this interior will make you change your mind. And the story of how you can transform a communal apartment, in general, will inspire feats. Some consider the rustic style a lot of country houses. Allegedly the presence of crude natural materials makes the interior too simple and rustic. But the hostess of this Moscow apartment and owner of the interior-studio MariLux Marina Alchieva is of a different opinion. Being a Greek by birth, she has always loved the traditional Mediterranean small houses made of stone, painted white, simple terracotta and ceramic coated bright glaze, warm wood and comfortable homespun textiles ... All of these native and favorite images she decided to capture in the interior of his new Apartments. For assistance in setting up an apartment Marina turned to the architect and his good friend Mihailu Dautovu who brilliantly turned the former communal forties on Pirogovke in a cozy apartment in rustic style, where the harmoniously joined together "neotosannost" and elegance, modernity and tradition. Mikhail Dautov, architect Michael - a famous Moscow architect. In 1995 he graduated from the Moscow Institute of Architecture, passed an internship at the architectural school of the University of Geneva, worked for 5 years as a designer in the airline "Transaero", and then decided to pursue private practice. For more than 15 years he has been successfully designing residential and public interiors (restaurant and trattoria Pane & Olio, restaurant "Kolbasoff", restaurant "Borgo", coffee shop "Le Gato", restaurant "Baba Marta" and others). Many of these interiors have been repeatedly published in leading interior magazines. The former communal apartment attracted the landlady with its location, the view from the window and the height of the ceilings. Unfortunately, the condition of the room was very deplorable: pieces of shingles hung from the walls and ceiling, floors, floors and window sills completely deteriorated, the original stucco in the style of Stalin's Empire style was almost completely destroyed. There was a lot of work to be done, but the final result promised full satisfaction. As agreed with the hostess, the architect decided on the minimum re-planning. Two rooms were combined into a large living-dining room with two windows, part of a long corridor was converted into a guest bathroom, the passage between two adjacent rooms - into the dressing room. Communal kitchen was divided into a large bathroom with a window, which the landlady had so much wanted, and a small but cozy and functional kitchen. Her tall apron was laid out with Tunisian tiles with traditional tulip-shaped ornaments, and because of the unevenness of the wall, the white corian countertop was placed deeper than the usual (75 cm), which made the cooking process particularly comfortable. The partition dividing the bathroom from the kitchen is unusual too: to make the wall look like "native", an old brick of Soviet times was used for its construction. 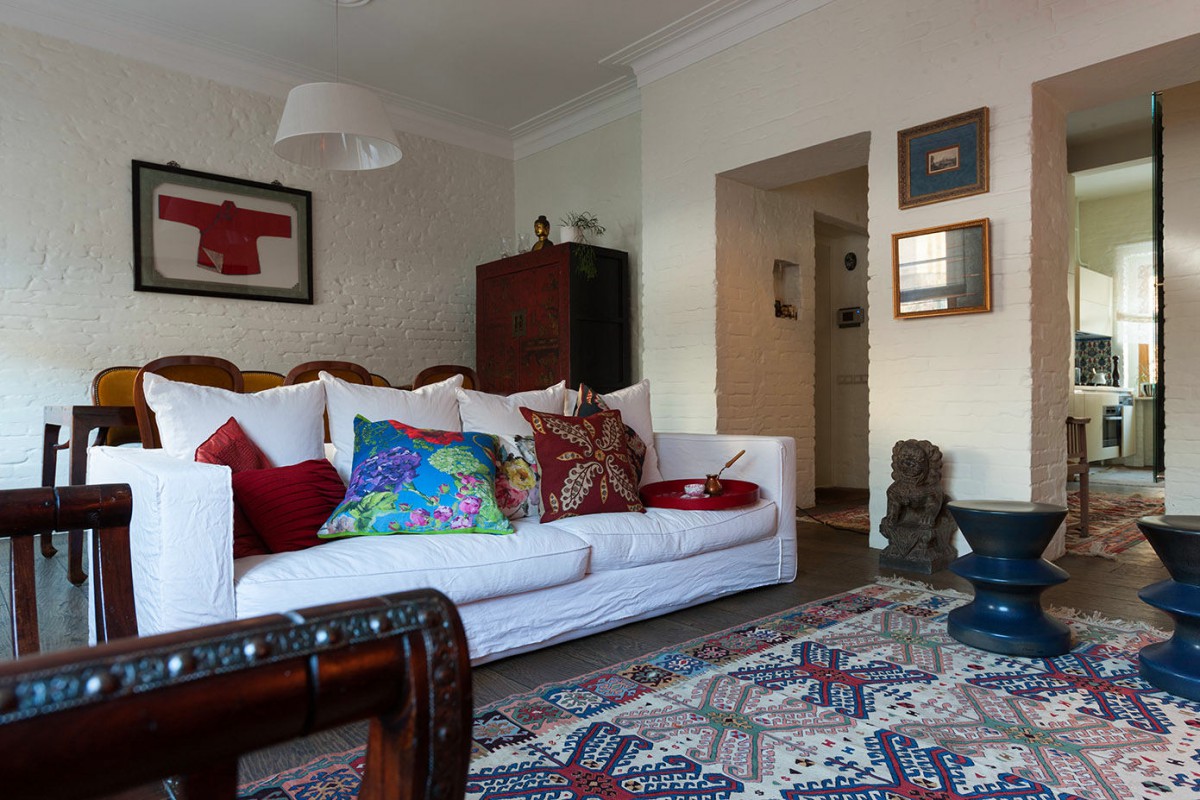 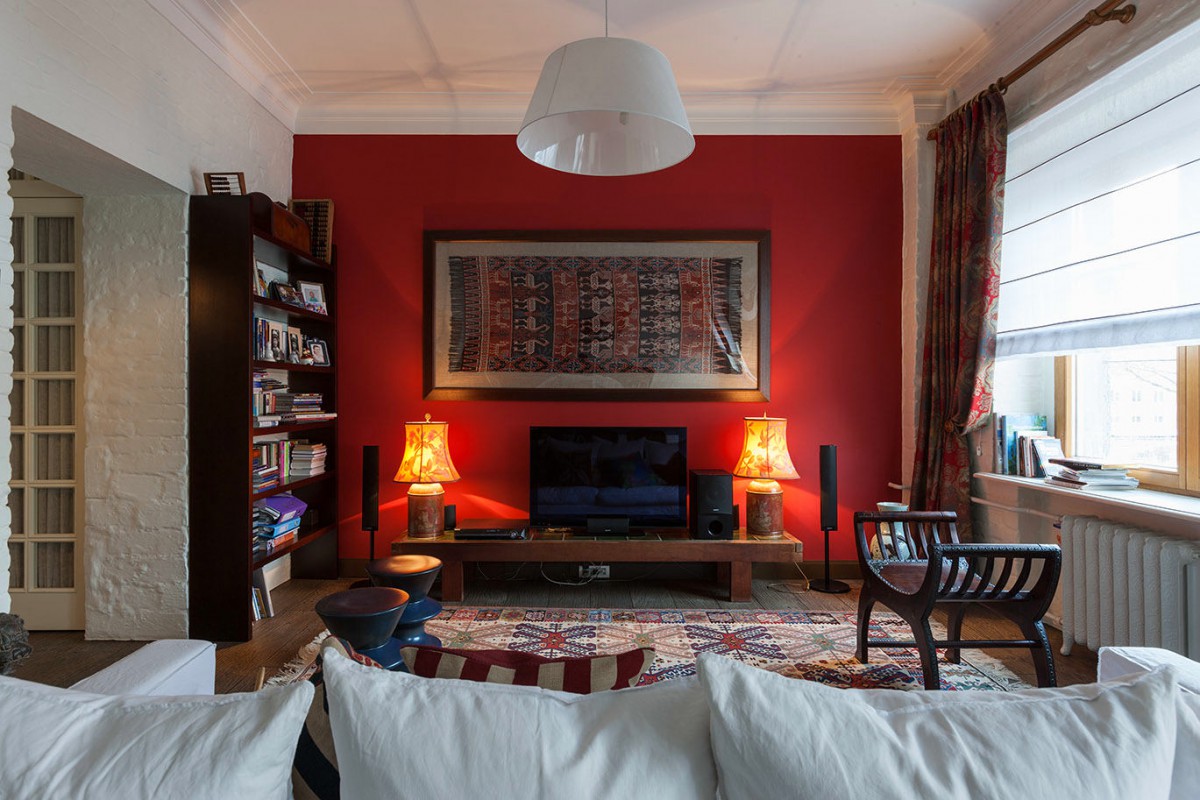 Realizing the love of hoyayka to adobeWhite houses, Michael Dautov left on most of the walls an open brick, which was covered with white paint, and the floor in the bathroom was laid out with natural terracotta, which once a year had to be waxed. In addition to coziness and pleasant memories, the white color of the walls helped to brighten bright objects and accessories. So, on the wall in the hallway, a large panel was hung, behind the glass of which was a contrasting black and red Ukrainian carpet woven by the grandmother of the mistress. Grandmother in general was a great needlewoman, and in memory of her in the apartment as an art object there is a sewing machine "Singer" and a panel of several spindles under glass (they decorate one of the walls in the living room). 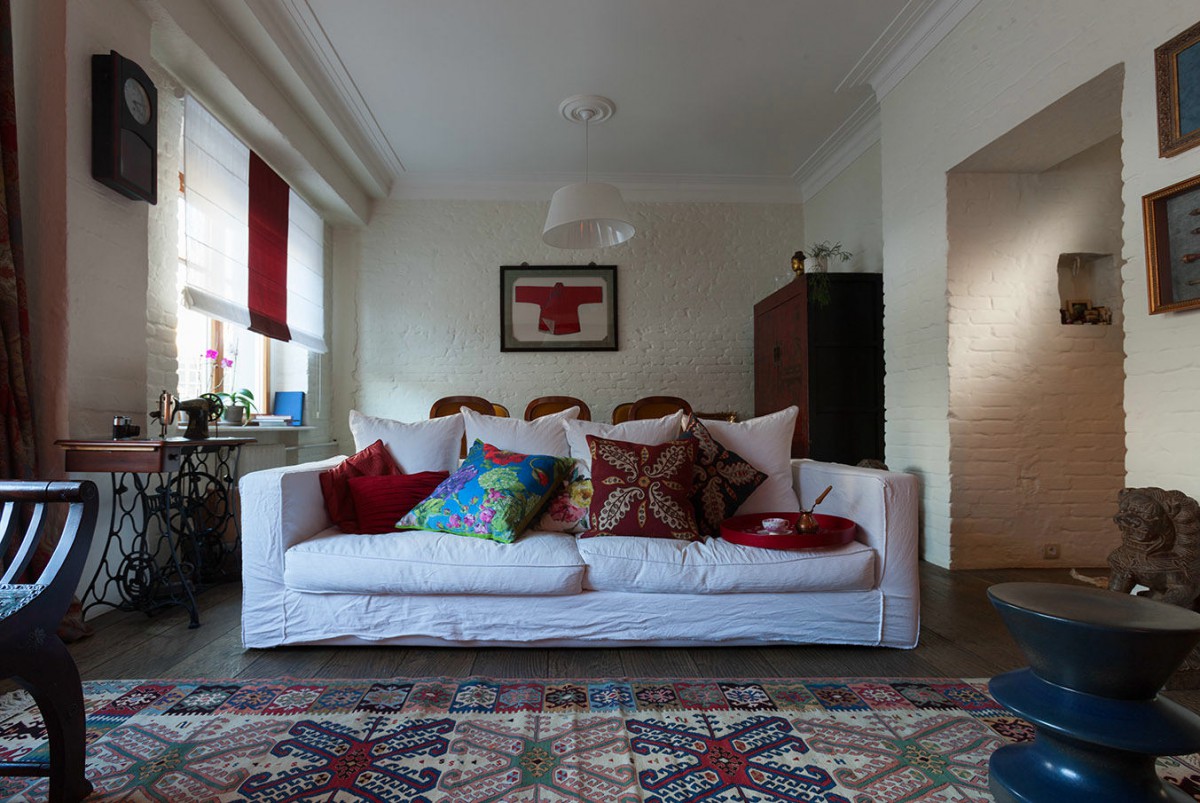 To recreate the atmosphere of an old house,The original molded cornices were restored to the ceiling, and the floor was laid out with an English broached parquet board (3 cm thick and 22 cm wide) made of oak sleepers. Uzbek handmade carpets, which lay on the floor in the living room and hallway, an ancient cast-iron bath on the paws, a lot of antique accessories and interior items give a special flavor to the interior. So, on one of the walls of the living room hangs under the glass a ritual shawl, which the architect brought specially for this interior from the island of Sulawesi, where the local population wears such shawls for especially important ceremonies. A wall in the corridor is decorated with a wooden panel with rich carvings - a fragment of antique furniture. 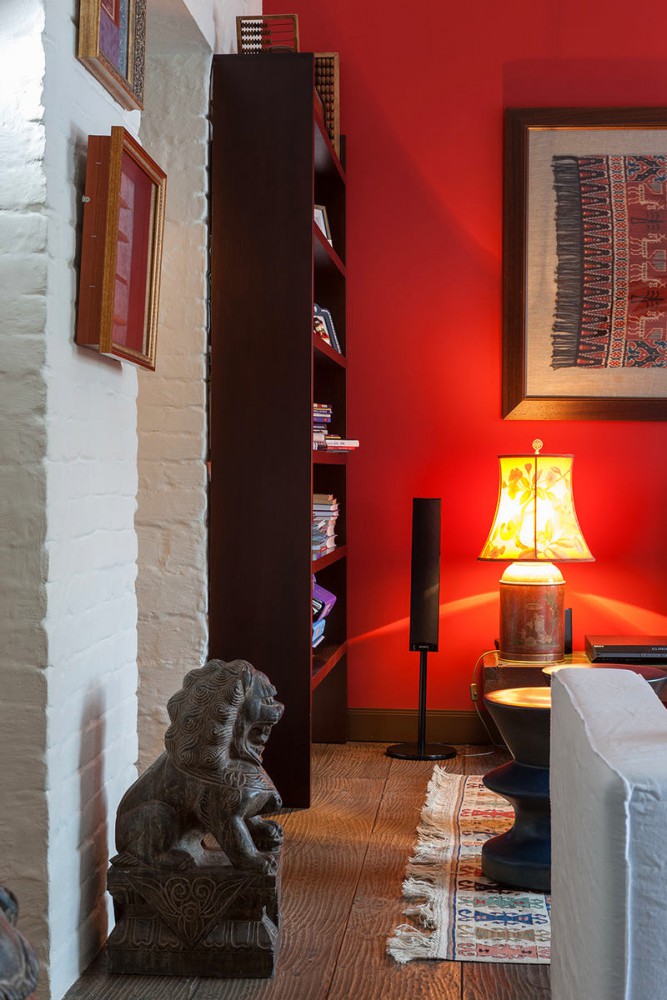 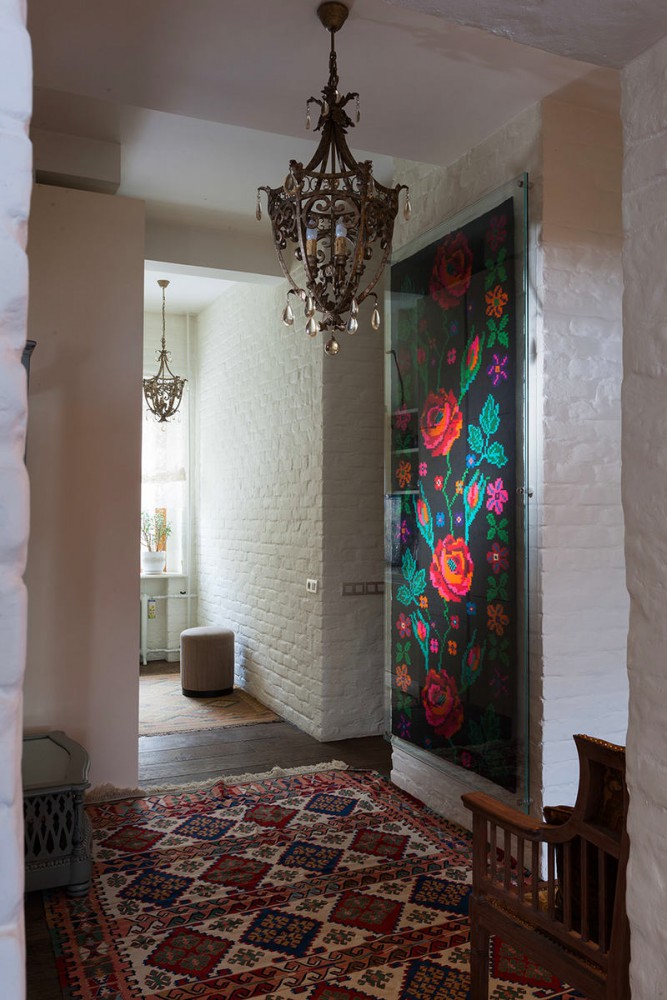 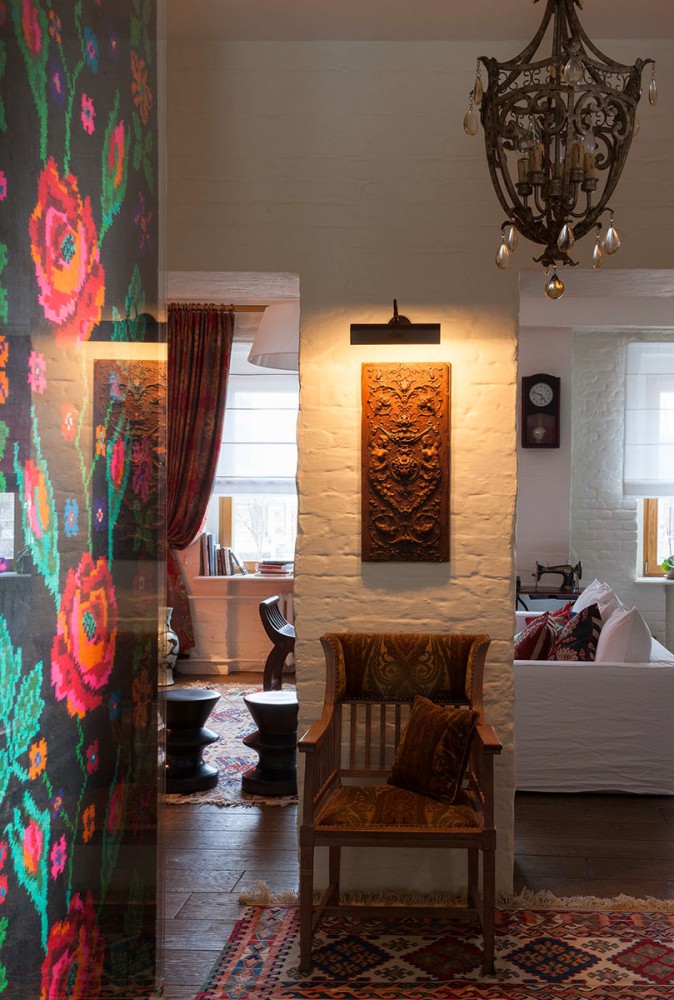 Marina Alchieva, owner of the interior-studio MariLux: - I really like things with a story. Each of them carries in itself a part of the soul of the former owners. Getting into the new interior, things that have survived their era, bring with them a piece of something alive, but almost forgotten. They create that unique aura that makes a house special. That is why in my apartment there are so many antique furniture and accessories. Together with Michael, we scoured the antique salons and flea markets, waited for weeks for new parties to find items that fit the spirit, time and place. Perhaps the most successful outing was the visit to the exhibition of museum furniture from Beijing, which took place in 2008 in the Central Department Store. At its end, the organizers were selling exhibits that did not represent a particular value for the museum. So in the house appeared a cabinet with traditional Chinese painting, stone dog-lions, black lacquer screen, become the head of the bed, antique chests, now used as bedside tables, a panel with a Chinese children's shirt under the glass. All these things with more than a century of history harmoniously blended into the interior and became bright art objects. Marilux.ru A bright color spot in the living-dining room was the wall opposite the sofa. Its color is very unusual, in Italian it means "dried tomatoes in the sun" (pomodori seccati al sole). Near the wall as a cabinet for TV stands an antique Dutch shop in the Art Nouveau style of dark oak with a countertop tiled. On the sides of the TV - vintage Chinese lamps. A visual divider of the dining room and living area is a sofa in a snow-white linen cover - another dream of the hostess. The dining table and chairs are also antique (XIX century), and the latter were restored in the workshop of MariLux. 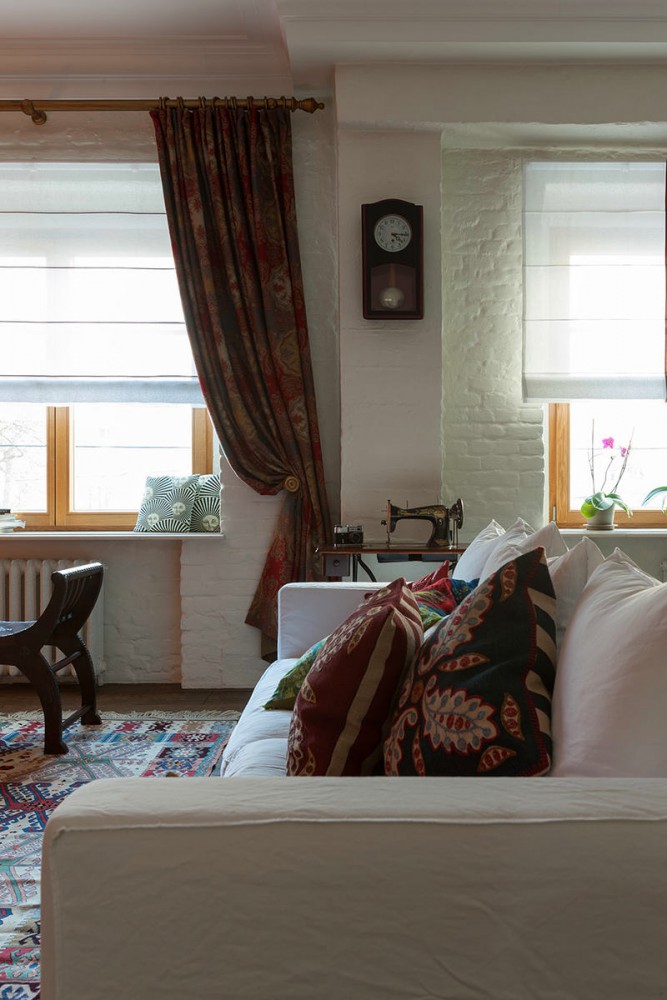 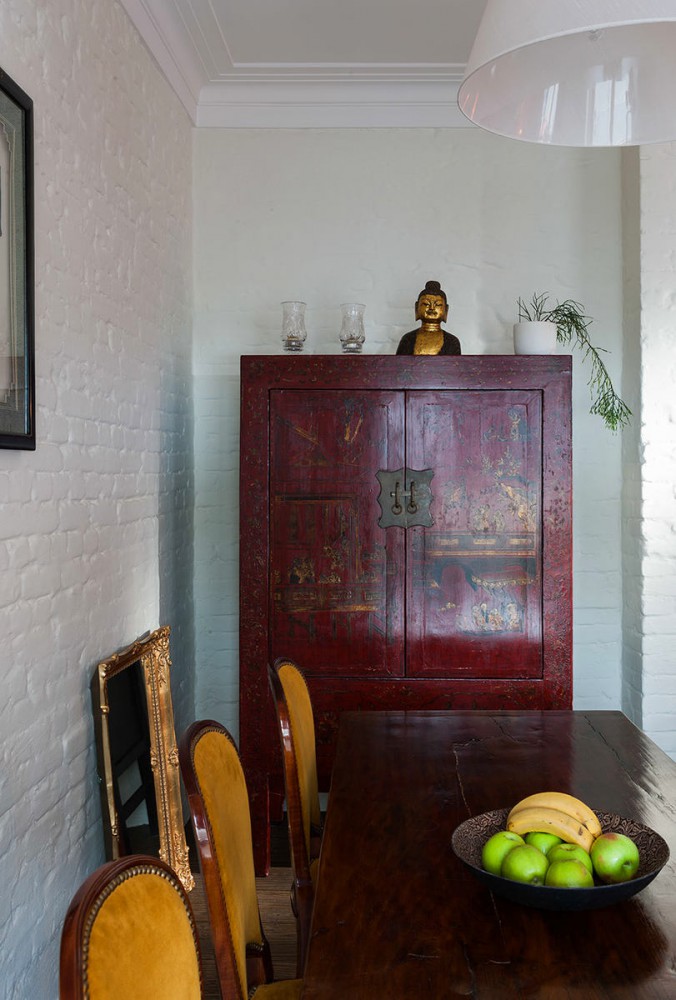 In the decoration of the apartment ownerTook a direct part. She personally selected all the textiles and developed the design of curtains, which were sewn in her interior-studio MariLux, there was also restored some of the antique furniture. It is Marina who owns the idea of ​​decorating interior doors with Etro fabrics. The drawing was drawn by the architect, and the workshop was also occupied by the owner's workshop. Marina Alchieva, owner of the interior-studio MariLux: - I've always loved to experiment with textiles, that's why I opened my workshop, where we help people realize their dreams. Want to give a new look to your favorite but old furniture - please make breathtaking doors, wrapping them in a cloth, like a sofa - and that we can. Even if you just decided to slightly update your interior, we will happily sew new curtains and pillows, we will drag the bored lampshades, change the cornices, we will select the wallpaper for your mood. And I really love Roman curtains, so in my apartment they are on every window. Sometimes on their own, and sometimes in a company with luxurious curtains. For example, in a bedroom, a Roman curtain made of silk in a strip (creating a beautiful shading), adjoins with heavy velvet curtains, which create a feeling of softness and comfort, and if they are pulled, then also a pleasant twilight. Roman blind in the living room is also the result of my fantasies: natural flax and wild silk. It turned out not very practical, but very impressive! My special pride is the lacy panel in the kitchen. It is woven of cotton on old machines in Scotland. When the rays of the sun make their way through it, the play of light and shadow fascinates! Marilux.ru 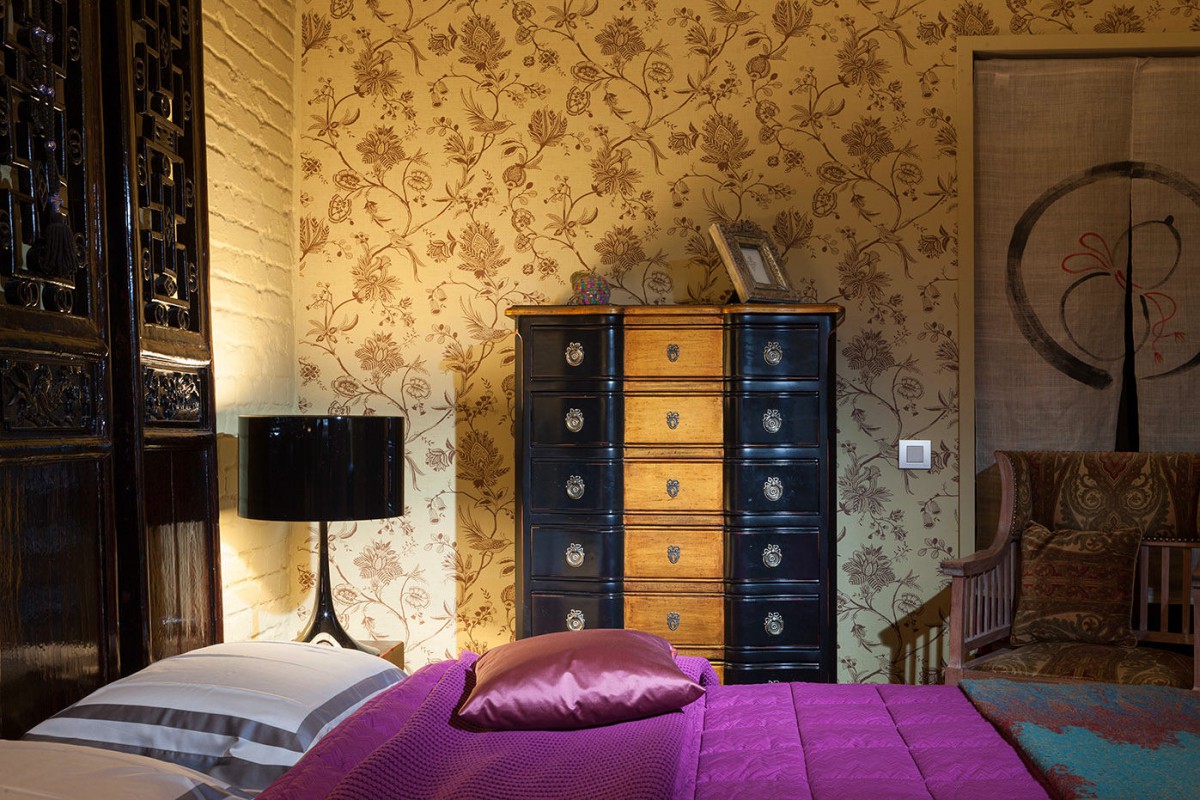 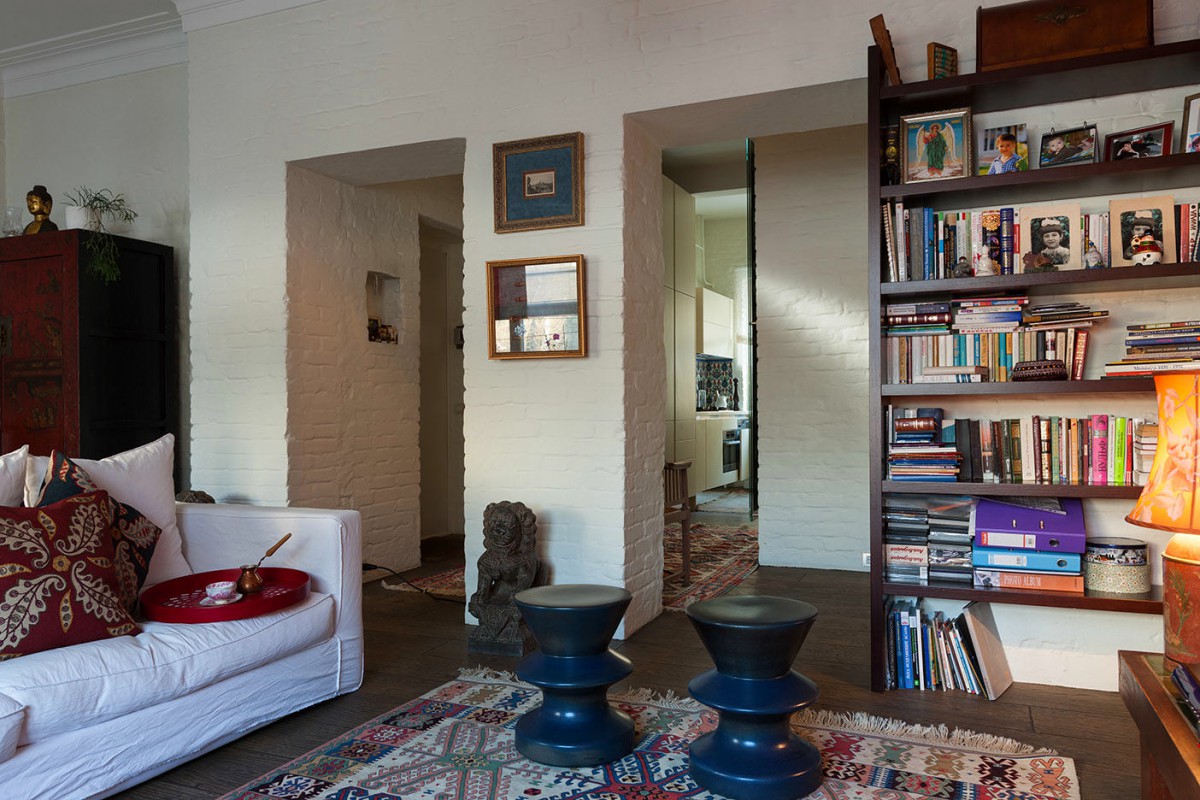 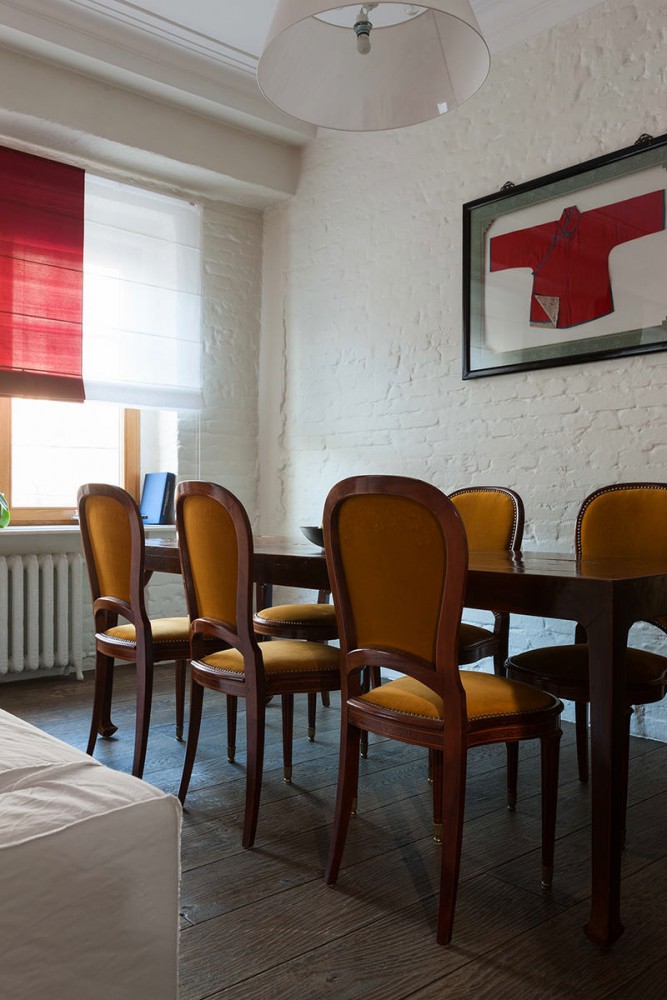 Despite the presence of rough surfaces,An abundance of wood and vintage items, the interior was very light and elegant. Against the backdrop of such furniture, the minimalist Flos fixtures and smooth white surfaces of modern Binova kitchen organically look.

Scandinavian interior in the walls of the former school - etk-fashion.com

Repair of the week: the organization of space in the teen room

Summer repair: a stylish interior of a country house