Have you ever observed how closeKitchen-dining by the efforts of the designer turns into a comfortable place for the whole family? Hot on the heels of the Fazenda TV program, etk-fashion.com publishes an amazing story of the transformation of the house from the Russian designer-decorator Anastasia Muravieva. Read until it is cold! Today, on the First Channel, the Fazenda TV program was broadcast, in which the designer-decorator Anastasia Muravyova's project was presented. Anastasia created an interior for a family who turned to a television program with a request to remake a tight and uncomfortable kitchen-dining room in a Moscow suburb. The designer faced a difficult task: to place a full kitchen, a dining room and an entrance hall in a small room, with an unsuccessful arrangement of communications and a lot of door and window openings. Anastasia Muravieva, designer decorator Designer-decorator Anastasia Muravyova graduated from the Economics Faculty of Moscow State University named after MV Lomonosov and the Higher School of Environmental Design in Moscow, received an MBA from Bristol University. Now works mainly with the interiors of private houses and apartments, has also experience in the design of public spaces. She is engaged in painting and photography, is fond of contemporary art and all these skills are successfully used in their interiors. I took part in art exhibitions, where I demonstrated my painting. The designer-designer sees his mission as creating a harmonious, stylish and comfortable space that takes into account the tastes, preferences and budget of the customer. Ready to work in any of the famous interior styles, without copying the samples and introducing a unique personality in each project. Anastasia-muravyeva.name The difficulty was also that the mistress of the house did not leave any wishes about the style and color solution, so Anastasia had to come up with everything from scratch. Especially the designer was concerned about the functionality, because before the redevelopment the kitchen area consisted of just one plate and a sink located on a small "patch" near the stairs, next to the gas boiler. As a result, Anastasia developed a project for redesigning the room and completely updated the situation. 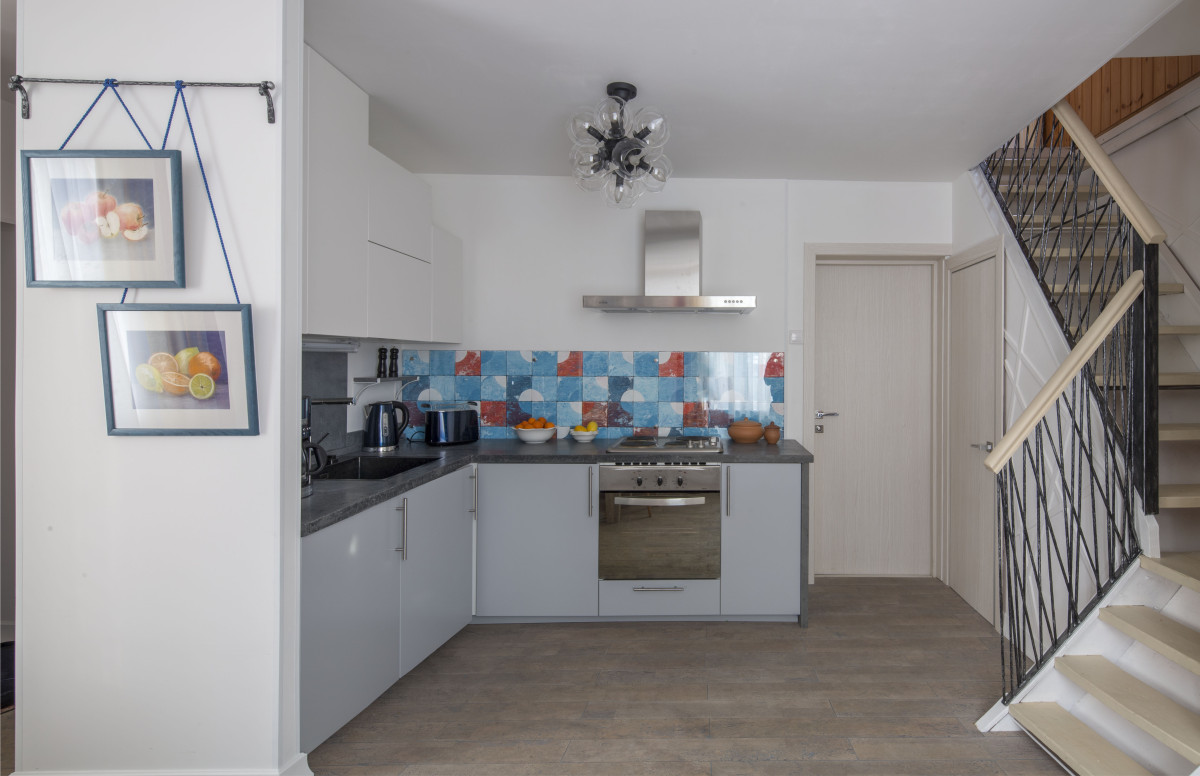 The kitchen was so uncomfortable that the hostess evenHad to lay out the ironing board to put dishes on it during cooking! Anastasia Muravyova, designer-designer First of all, the partition separating the main room from the entrance area was moved, and the passage to the kitchen from the hallway was placed somewhat differently. Thus, it was possible to allocate enough space for the kitchen with a full working area and leave space for a compact hallway. In addition, an additional partition was built, separating the pantry with the gas boiler. The refrigerator was placed there. The designer chose a contrasting color solution: Bright accents on a white background. Textures to the background gave chaotically located broken lines. They are repeating the picture of the forged stair railing. The steel rods, of which the handrails are made, were also given an invoice, and then painted black with the effect of silver patina. The abstract motif is repeated in the form of a chandelier hanging above the dining table. 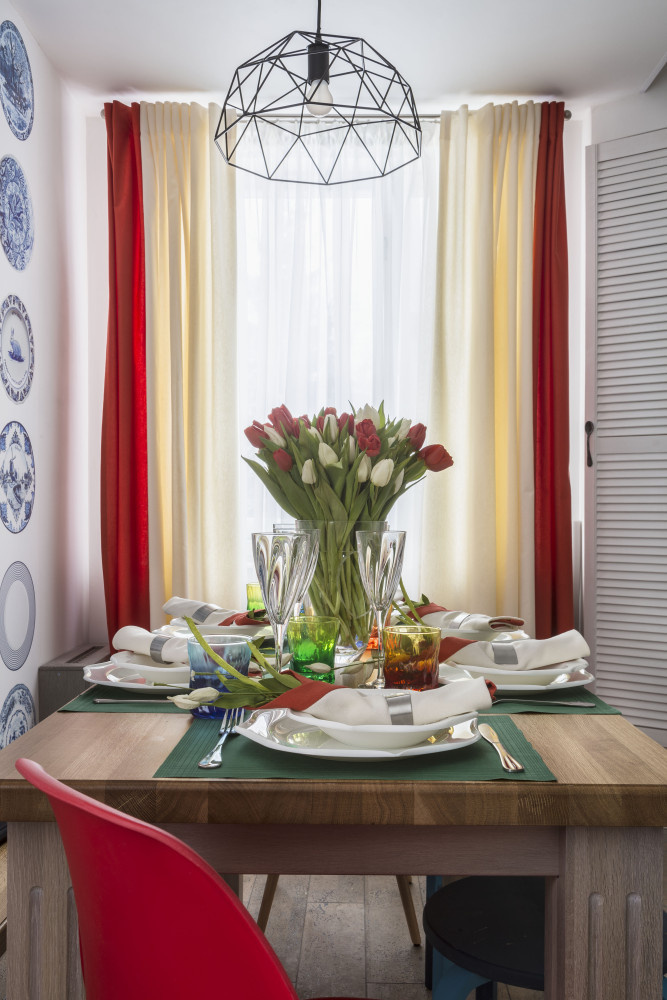 The main decoration of the dining area - wallpapers withPrint plates in the traditional for Holland blue tones. The table and bench are made of solid oak. A characteristic feature of modern Dutch interiors is also a combination of new and traditional, so for contrast next to the oak table there are bright red chairs made of plastic and stools, painted by the designer in tone to the main colors of the interior. 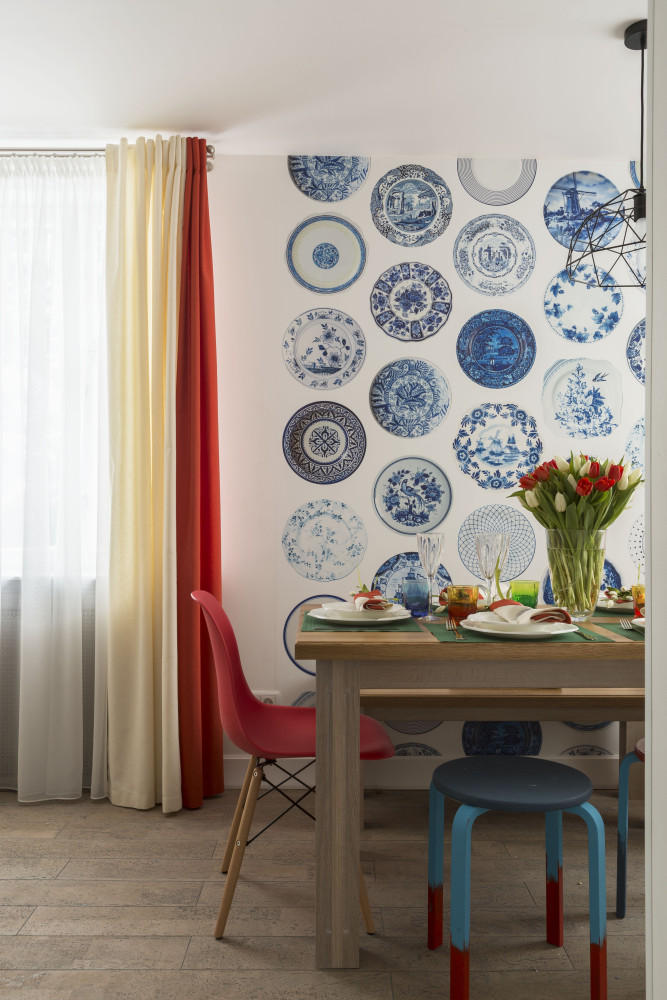 The table layout uses originalCymbals, the shape of which resembles an open tulip. In the center of the table is a vase with real flowers. And napkins with orange edging and glasses made of multi-colored glass make the table zone even brighter and more spectacular. 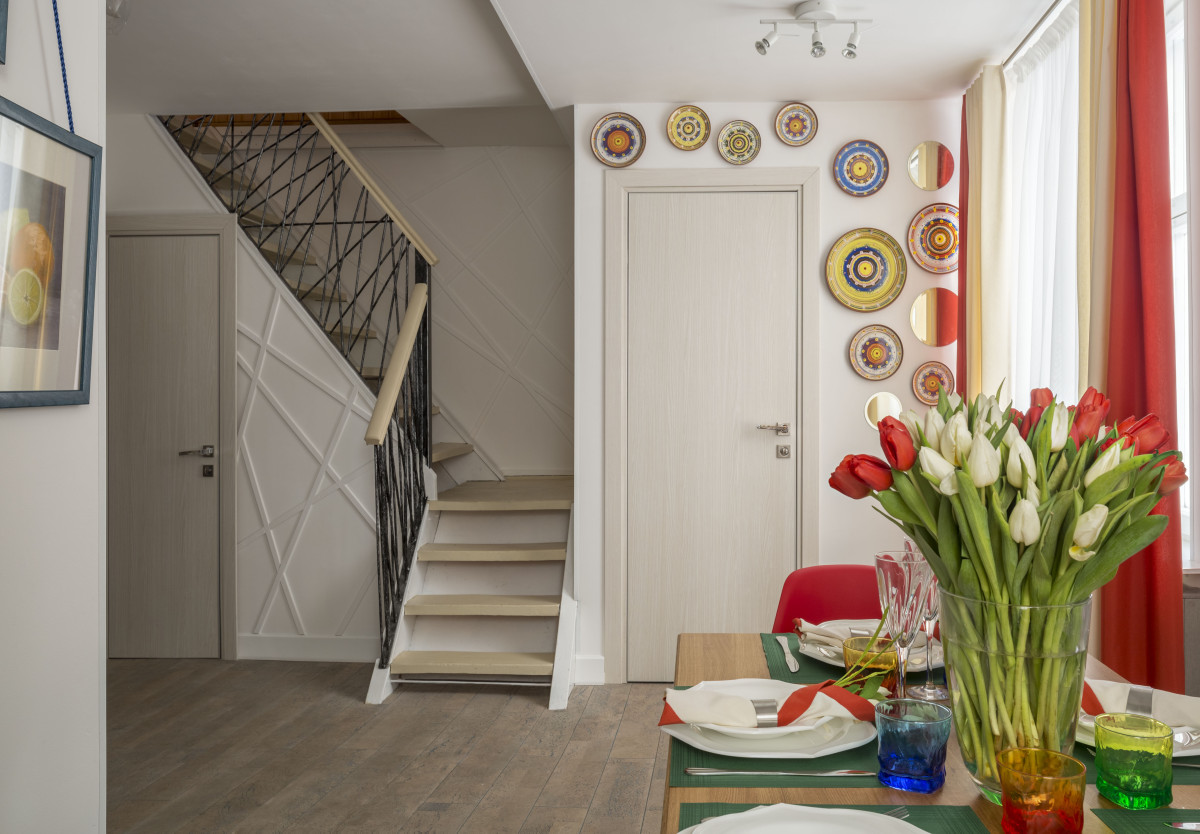 Between the window and the door leading to the pantry,There are communications hidden in a box. There is a built-in cupboard adjoining it, the handle of which is made in the form of a spoon. By the way, the spoon was forged by hand. Nearby there is an original designer wall. 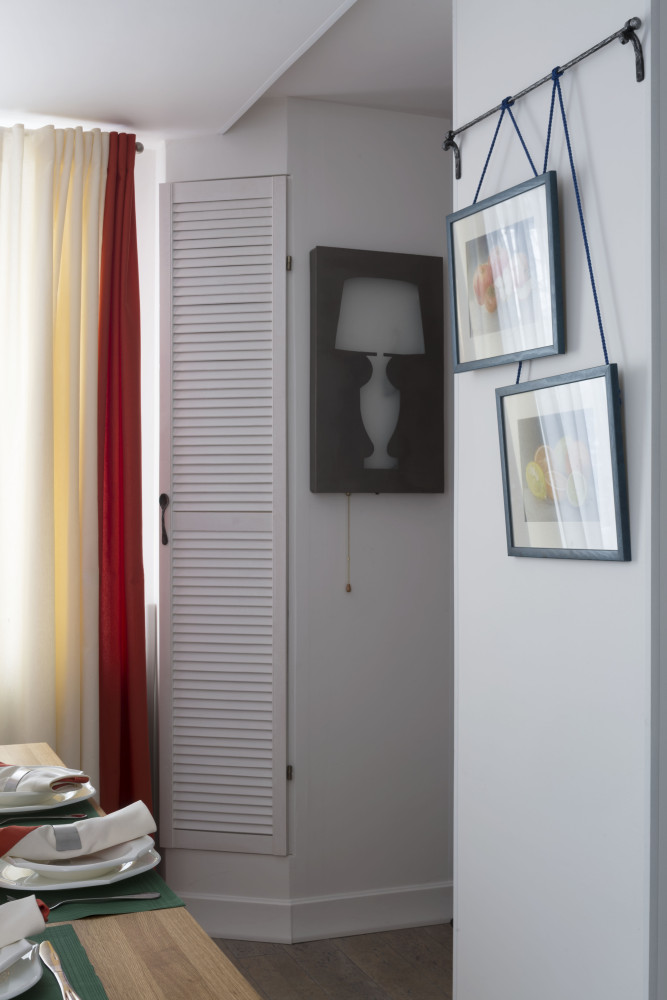 The decor of the dining area is completed by a diptych with fruit,Specially written by pastel author of the project for this interior. To hang the paintings, a special fastening was forged: if the hosts want to add or change the composition, the wall does not have to be drilled. The kitchen itself is L-shaped. Suspended cabinets form an asymmetric composition that echoes with geometric abstractions in the spirit of Pete Mondrian. The main accent of the kitchen is the painting of an apron, made in the technique of glazing and imitating a tile. On top of it is a tempered glass. The worktop, the panels on the left wall and the shelf on the forged fastenings are cast from concrete. The edges of the countertops are deliberately left embossed to give it some brutality. Another interesting detail in the interior of the kitchen - a chandelier with glass shades, which has a fashionable "molecular" shape. 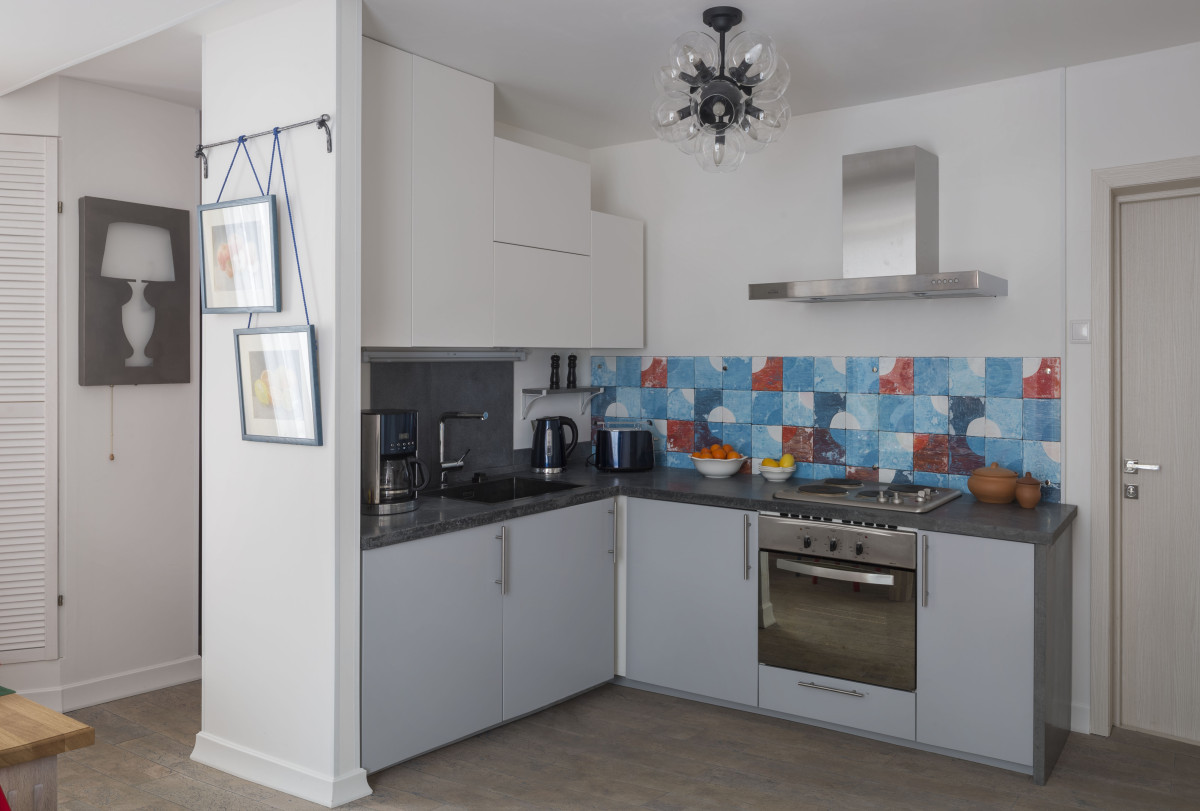 The finishing touch is real three-dimensional plates,Mixed with round mirrors on the wall between the stairs and the window. For the plates, the designer had to make a small trip to Tarusa. 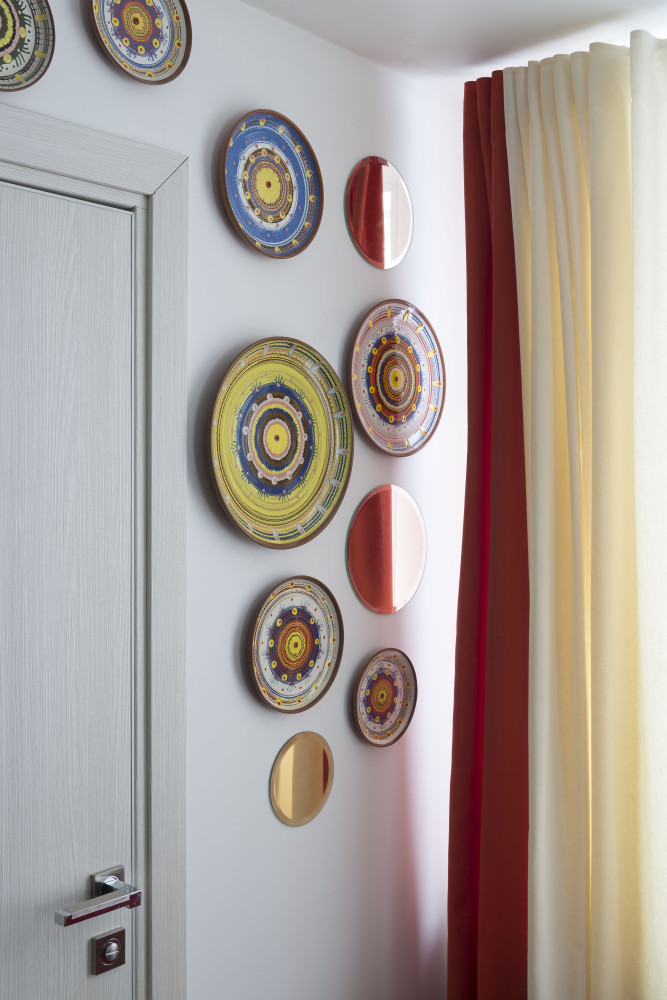 As the mistress of the house wanted, that premisesWere convenient and functional, the project used modern storage systems. On the inside of the door pantry - metal shelves for detergents and various small items that allow you to maximize the use of a small space. In the hallway there is a cloakroom system with drawers and hangers. Its elements can be interchanged by themselves, without disassembling the entire construction. Clothes in the hallway can be covered with a curtain, and as a pick up a tulip, forged by hand on the sketch of Anastasia Muravyova. 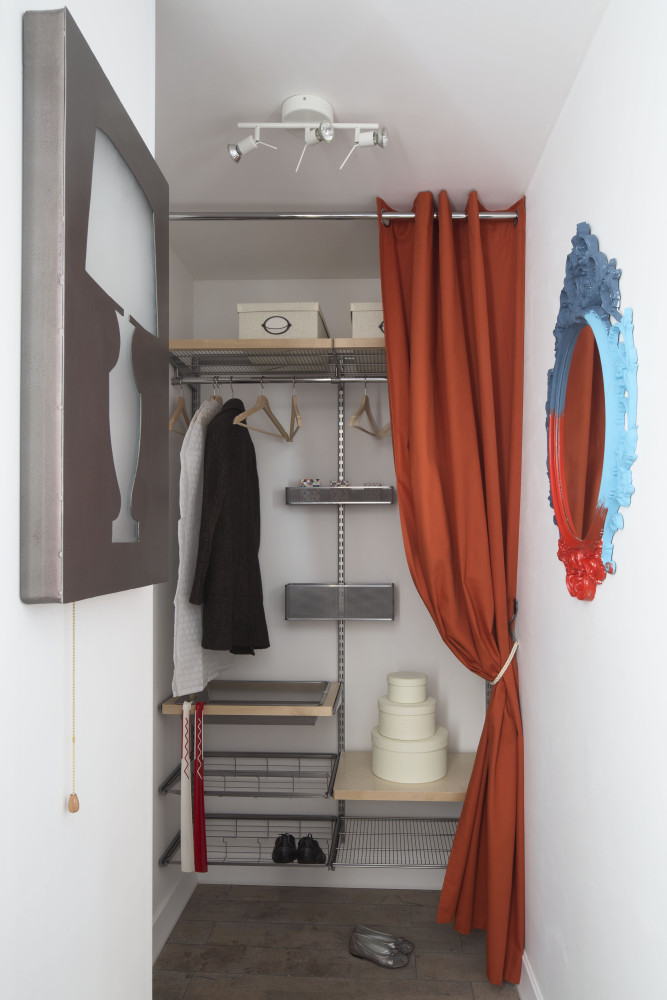 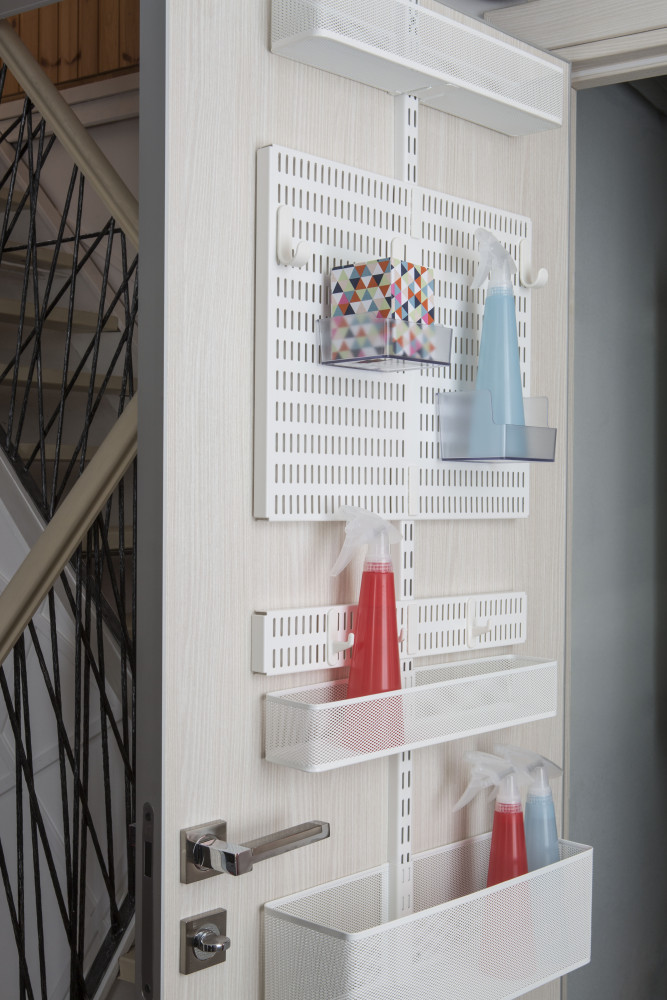 * All the photos: Denis Vasiliev.

Novelties of September for the kitchen: a mixer, oven, stove and a curbstone - etk-fashion.com

Seven on benches: the house of a large family in New York