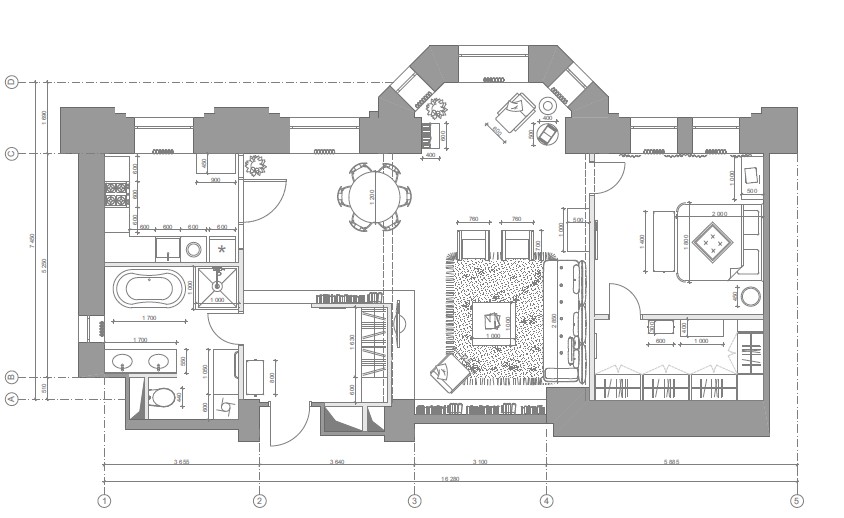 There is no room for a young couple in this apartment.stereotypes: in the hallway, guests are greeted by a huge Indian elephant on the wall, and in the center of the bedroom there is a vintage black bed. The author of the project, designer Yulia Kirpicheva, tells about these and other randomly selected items. The owners of the apartment are a young couple. We met, as is often the case in the 21st century, through mutual acquaintances on a social network: she herself added him as a friend and began to actively put “likes”, and he could not help but respond to them. After the meeting, feelings flared up immediately, and after a very short time, young people began to discuss their life together and the interior of the future apartment. The designer undertook to help them realize all plans, ideas and wishes. Julia Kirpicheva, designer Julia was born and raised in Moscow. Her father is an artist Grigory Roshchin, so the choice of profession was determined from childhood. She graduated with honors from the Moscow State University of Education and Science with a degree in design in 2011 and the School of Details in 2016. Since 2010 she has been engaged in interior design, her portfolio includes private and public interiors. Julia's projects and articles are published in leading magazines and on popular Internet resources. He considers a conceptual approach to interior design as his principle in work. www.kirpichevaj.com Stylistics The entire interior is based on one of the most influential and striking styles in the history of American design - the mid-century modern style. The choice in his favor was made for a reason: at one time the landlord lived in the United States and worked for Apple, and the American style of life, with its scope, comfort and at the same time minimalism, is very close to the young man in spirit. Yulia Kirpicheva, designer: - Thinking over the future interior, the customer often recalled American interiors and the feelings that he experienced in the snow-white design studio of the legendary Apple, where there was nothing superfluous - just that very feeling of freedom and inspiration. At first, his bride was embarrassed by his slightly ascetic ideas about the interior and the abundance of white, but later she agreed that the interior is the background of life, and most importantly, not things, but feelings. The color palette of the interior is based on a contrasting combination of white and black in different variations and diluted with color accents of shades of sky blue, pale green, pearl gray and garnet. 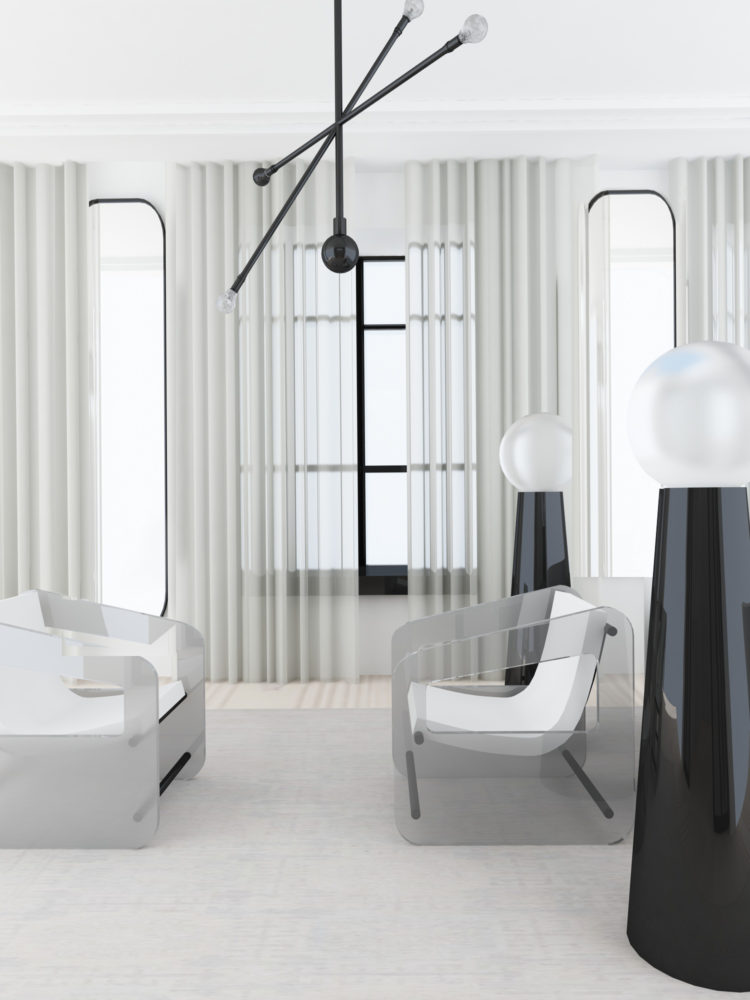 Hallway The first thing that a person sees when enteringapartment, - a large-scale image of an Indian elephant in the entire wall of the hallway, a mirror of an unusual shape and a small console. This art object, combined with vintage details, is designed to immediately tune in the right mood and inform you that you are not in an ordinary apartment. And it is unusual because the owners are extraordinary people who do not like stereotypes. Thinking differently is like a lifestyle, and this philosophy extends to the interior as well. 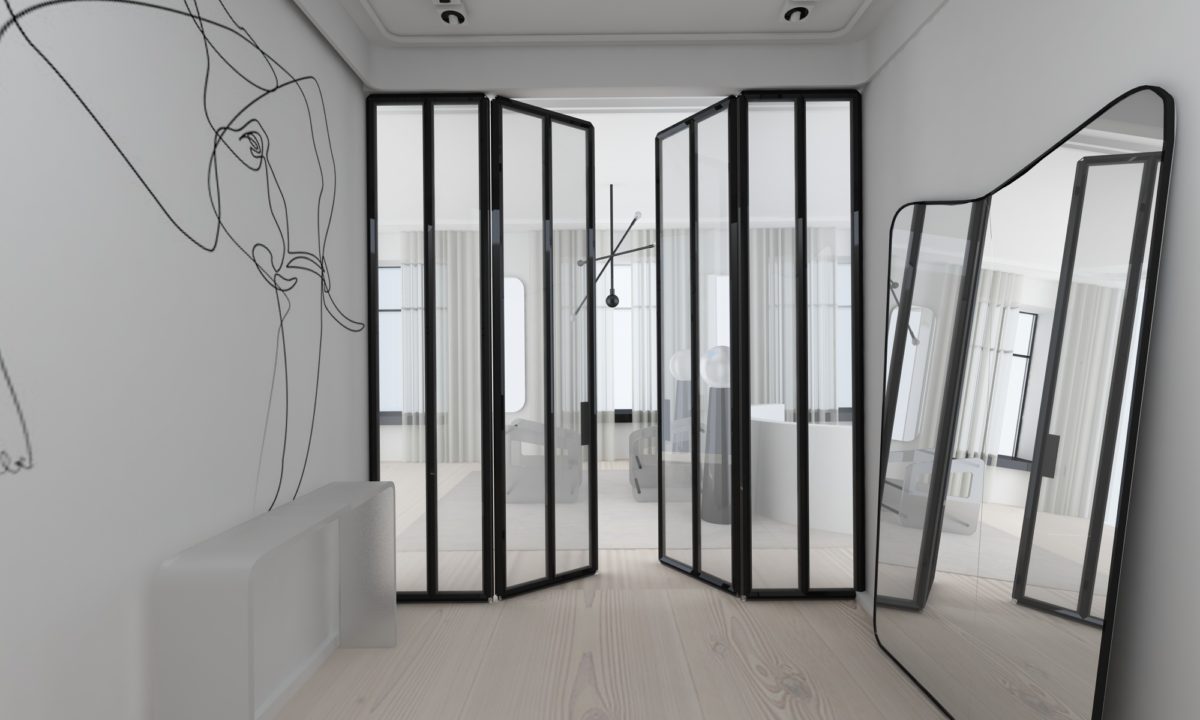 Lounge area Central room in this apartment- living room or lounge area. Almost all the objects here are streamlined and were not chosen by chance. The semicircular linen sofa by renowned designer Vladimir Kagan is not only very comfortable, but also a classic of American design and is the quintessence of mid-century modern style. The coffee table by our contemporary Emmanuel Beybld is made of volcanic lava. Some of its modules are painted in azure color and serve as a color accent in the interior. 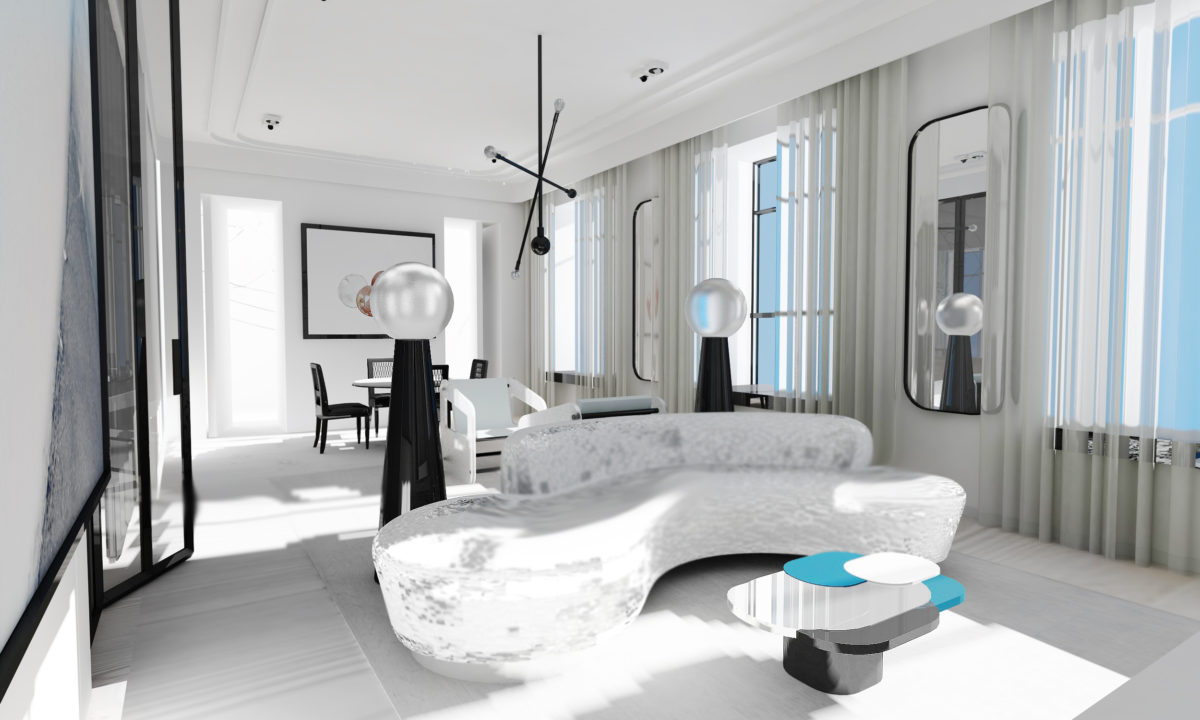 Eclectic interior of the lounge zone emphasizesplastic - the main product of the "golden age" of design. It is made of a vintage console and armchairs in the so-called conversation place. It is worth mentioning the schedule of the French artist Francoise Gilot. Her work is also posted in the office. All of them are dated 1959 and bought at auction. 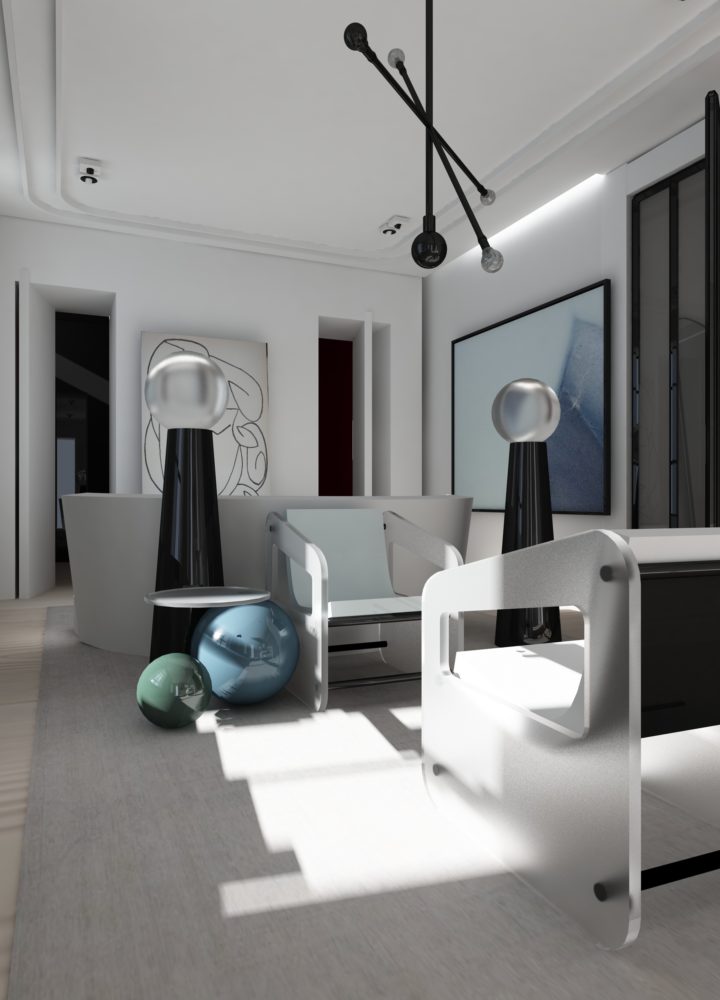 The watercolors in the zone also carry semantic load.dining room (work acquired at 1st dibs) - an apple that fell on Newton's head as a symbol of a push to a decision, which was preceded by a huge work of the mind. At the same time, watercolor also serves as a color. The leg of the round dining table is solid teak and the top is made of tulle, a patented modern finish. 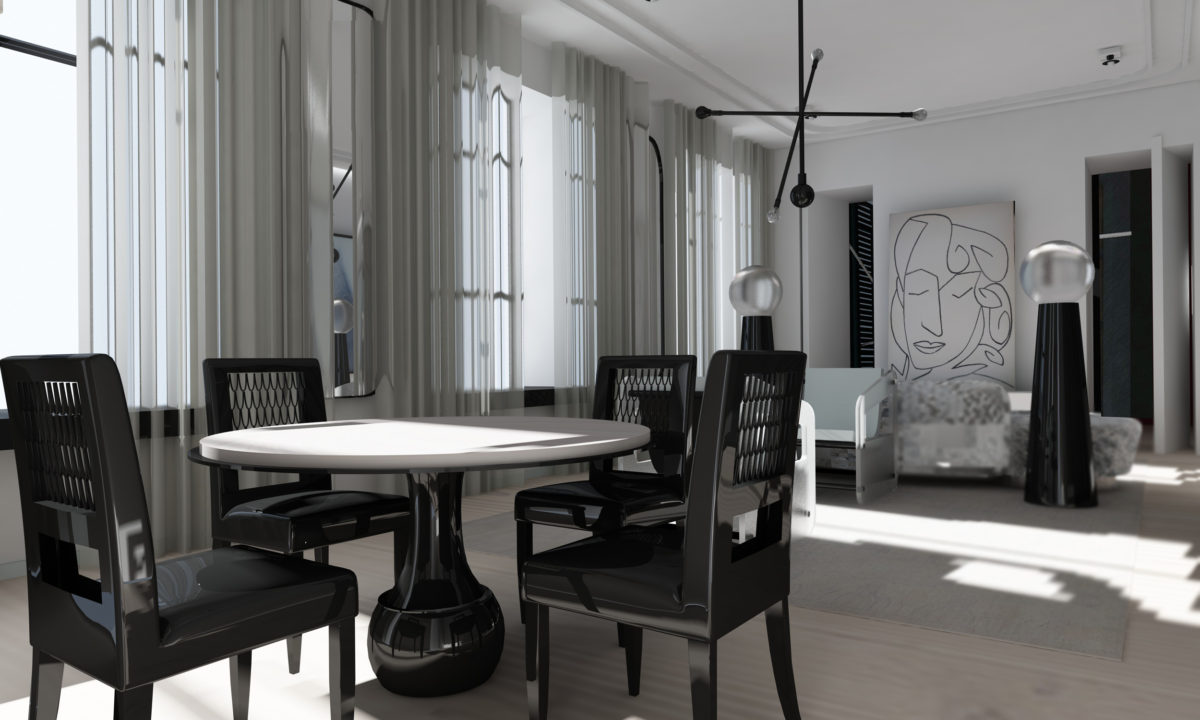 Cabinet Cabinet (or gadget room) - pridethe owner of the apartment. The interior of this room embodies the feeling of freedom and boundlessness. A complex and deep, but at the same time warm tone with a matte structure was chosen as the basis of the color palette. The bluish-black color of the walls and ceiling visually changes the perception of space: the dark ceiling goes into infinity. In the office, we find ourselves in a zone of distorted reality - the feeling on which the legendary Apple was founded by its creator. 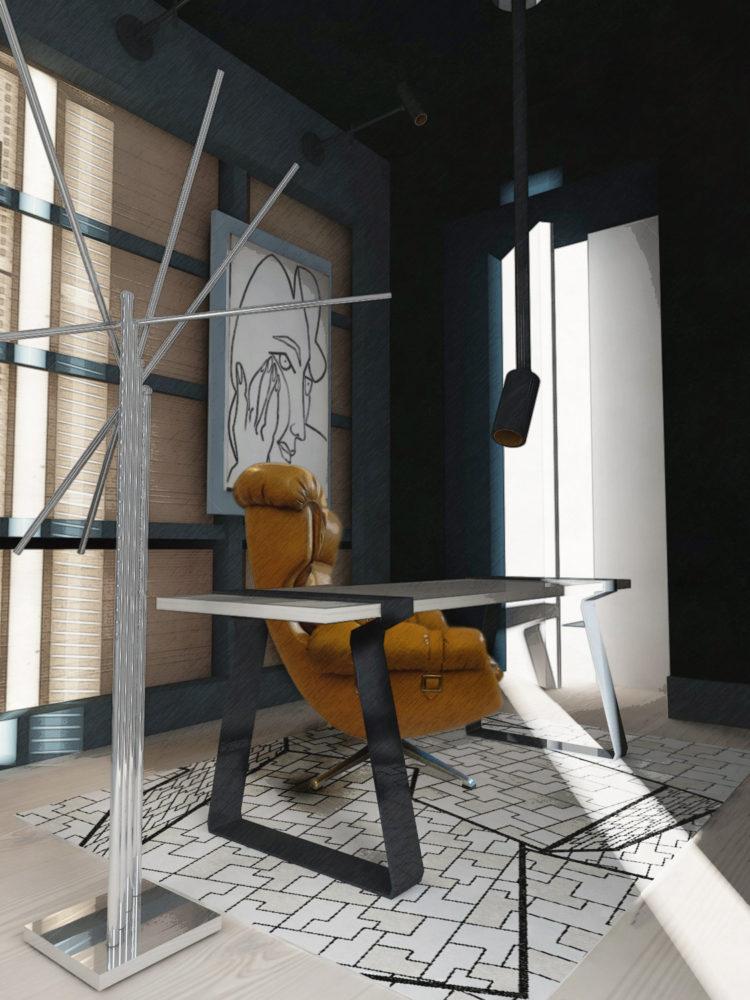 The desk is made of solid teak, veneer -gray oak of golden tones. Oak shelves with a thickness of 5 cm are equipped with a backlight, which is displayed in the cornice of the cabinet. The cabinet also provides a retractable table top at a height of 110 cm for a more comfortable work. The carpet design was developed by the iconic American architect-deconstructivist - Daniel Libeskind. 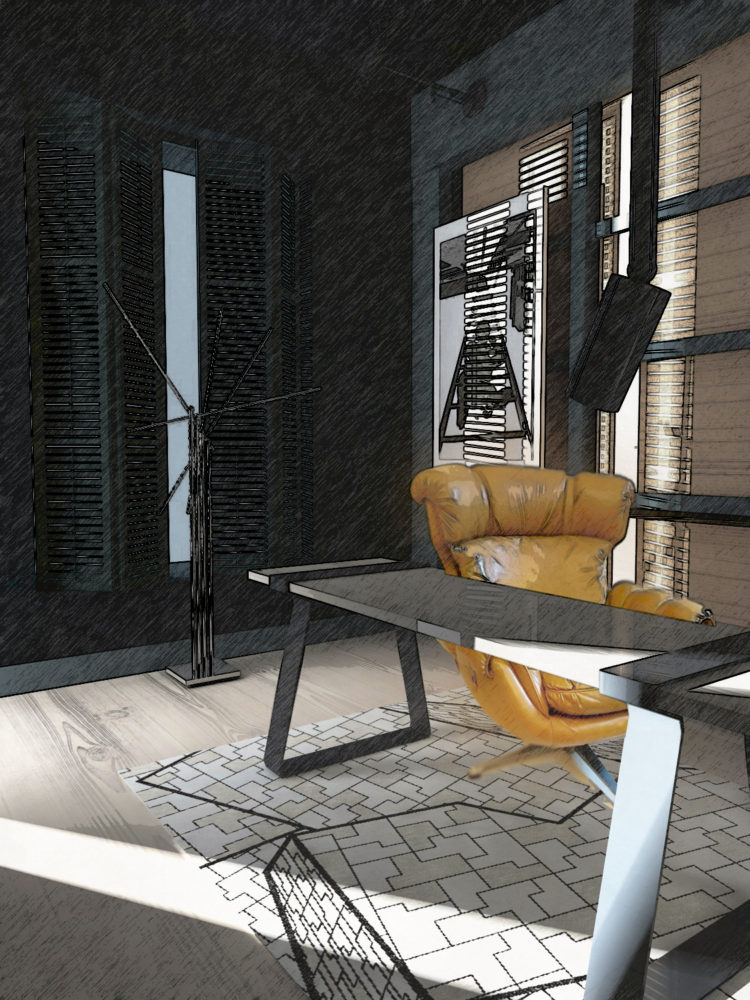 Julia Kirpicheva, designer:- The key element of the cabinet's interior is a metal pendulum created by furniture designer and mechanical engineer, representative of modernism, Philip Lloyd. The pendulum was bought at the Sotheby’s auction and refers to the master's education in physics and mathematics. Bedroom American scale is also present in the bedroom - first of all, it manifests itself in the large-scale painting of the built-in wardrobe, which occupies its entire surface. The framing of the niche into which the wardrobe is built is made of garnet-colored suede in a slightly dusty shade. The linearity of the pattern and the matte structure of the pearl-colored background contrast with the satin texture of the jasmine-gray wall. Vintage suitcases covered with braided leatherMexican buffalo with exotic wood trim, are located near a low vintage bed with a black lacquered headboard and reflect the owners' love for travel, change and knowledge of the new. Nearby mats made of mat with a woven silk thread continue this sensation. Blinds are made of teak and painted in blue-black color - such mistress of the apartment is the night sky in Andalusia, which she loves. Julia Kirpicheva, designer:- The interior needs not only the right colors and textures, but also its own sound and special rhythm. The bedroom in this apartment is filled not only with the play of light and shadow, but also with sounds. So, from the wind penetrating from the open window, the installation by the bed is filled with an easily perceptible metallic sound. Its prototype was the work of designer Harry Bertoy, one of the brightest representatives of the mid-century modern style. The quiet sound - the rhythmic beat of the train wheels - reflected the mistress's dream of an engineering education and carriage design. Bathroom The model of the chandelier in the bathroom is called "Clouds", and the same name for the pattern could be found in the marble used for the aprons of the sinks and with which the floor is tiled. The washbasin cabinets are made according to sketches from moisture-resistant MDF, painted according to the RAL system. The "boudoir" shade of gray and pink serves as the backdrop for vintage mirrors, cast iron taps and a modern bathtub made from a single piece of polished Carrara marble. Completing the look of the boudoir in the clouds is a graphic work purchased from one of the galleries in Paris and a vintage chair upholstered in velvet chinoiserie style.