Architect Nika Vorotyntseva in collaboration withDenis Svirid has created an apartment interior for an energetic girl that meets the spirit of modern life, where every meter of a small space has been transformed and used to the maximum. Today we publish a joint work of Nika Vorotyntseva and Denis Svirid. We liked the apartment as a virtuoso game with space, bold decisions and interesting accents, and thanks to the practical principle of “volume in volume”, the authors managed to turn a one-room apartment into a two-room one with a separate spacious dressing room. The result is bright and dynamic. Nika Vorotyntseva, architect, interior designer Young and talented Ukrainian author. In 2008 she graduated from KNUSA, master. In 2012, she opened her own architectural and design bureau in Kiev. In the same year she took the third place at the national competition "Interior of the Year 2012" in the nomination "Modern residential interior". “A modern interior is not so much a demonstration of possibilities as a reflection of a lifestyle,” Nika is convinced. We strive to implement ideas that bring pleasure to both the customer and ourselves. Our overarching goal is to form a mature perception of both design in general and the role of a designer in the success of each project. A characteristic feature of our interiors is manifested in the work with spaces and volumes, where you can feel the architectural thinking and approach. " Denis Svirid, architect In 2004 he graduated from the Odessa State Academy of Civil Engineering and Architecture (OGASA), master's degree. Member of the Union of Architects of Ukraine NSAU. Winner of the Inter * year 2014 competition in the category “Unrealized Projects”.

Who is the head in this house?

The owner of this apartment on the 20th floor of one ofKiev new buildings - a young girl working in the fashion industry, a fashionista, a traveler and, moreover, is fond of creativity. Thanks to the excellently thought-out work with the space, the authors of the project managed to turn a one-room apartment into a two-room one, placing in it, among other things, a separate bedroom with an impressive dressing room. Nika Vorotyntseva, architect “The main requirement of our customer was the maximum number of different storage locations. We have combined the hallway, living room and kitchen, and also enlarged the bathroom. They decided to abandon the dining table in favor of the bar counter: this is quite consistent with the style of modern youth life. " About style and color

The space itself turned out to be minimalist, whichturned out to be close in spirit to both the owner and the author. The combination of black, white and red in the interior is the preference of the hostess. A win-win combination of white and graphite with concrete and wood textures, complemented by rich, colorful accents. Nika Vorotyntseva, architect "Our task was to maintain the balance of these colors, and to soften such a radical combination of shades, we added light gray concrete and light wood, bringing a little warmth and comfort to the atmosphere." Open plan living room and kitchen, along withcozy soft areas, has to communicate. The floor in the day area is made of decorative concrete, which allowed to further emphasize the integrity of the interior composition and avoid seams, at the same time for the bedroom selected carpet. The ceiling and most walls are painted. In the bedroom, as an accent stands a brick wall, and in the living room - plaster, imitating the texture of concrete. 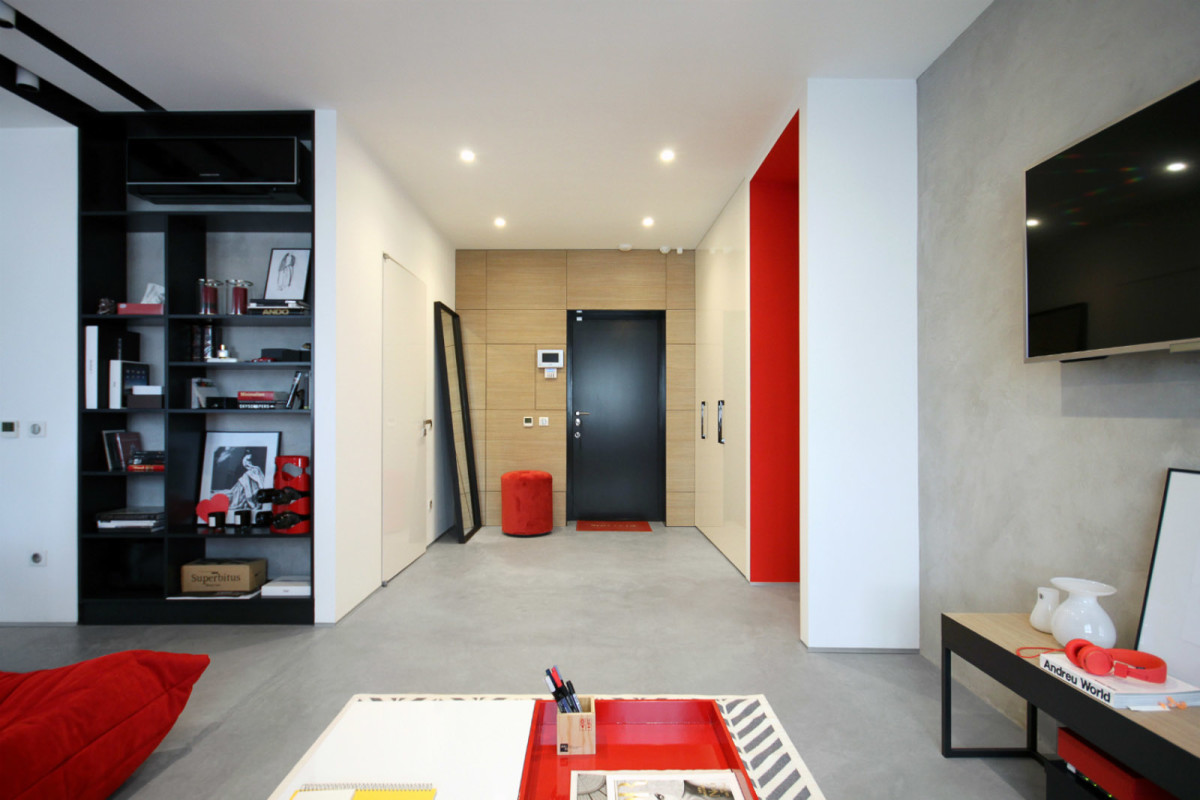 Nick Vorotyntsev, architect "The basic conceptwas to create an open living space for communication and meeting with friends, while retaining its functionality. In the interior, the principle of "volume in volume" is used: massive shapes, highlighted in color, look like a built-in module. For example, the built-in wardrobe in the hallway is integrated with the bedroom portal, which gives the impression of a full volume, and the red accent gives expressiveness. Just beaten and a monolithic pylon separating the kitchen and living room: from the kitchen - it's a cabinet, and from the living room - a single graphite volume with a soft zone. " 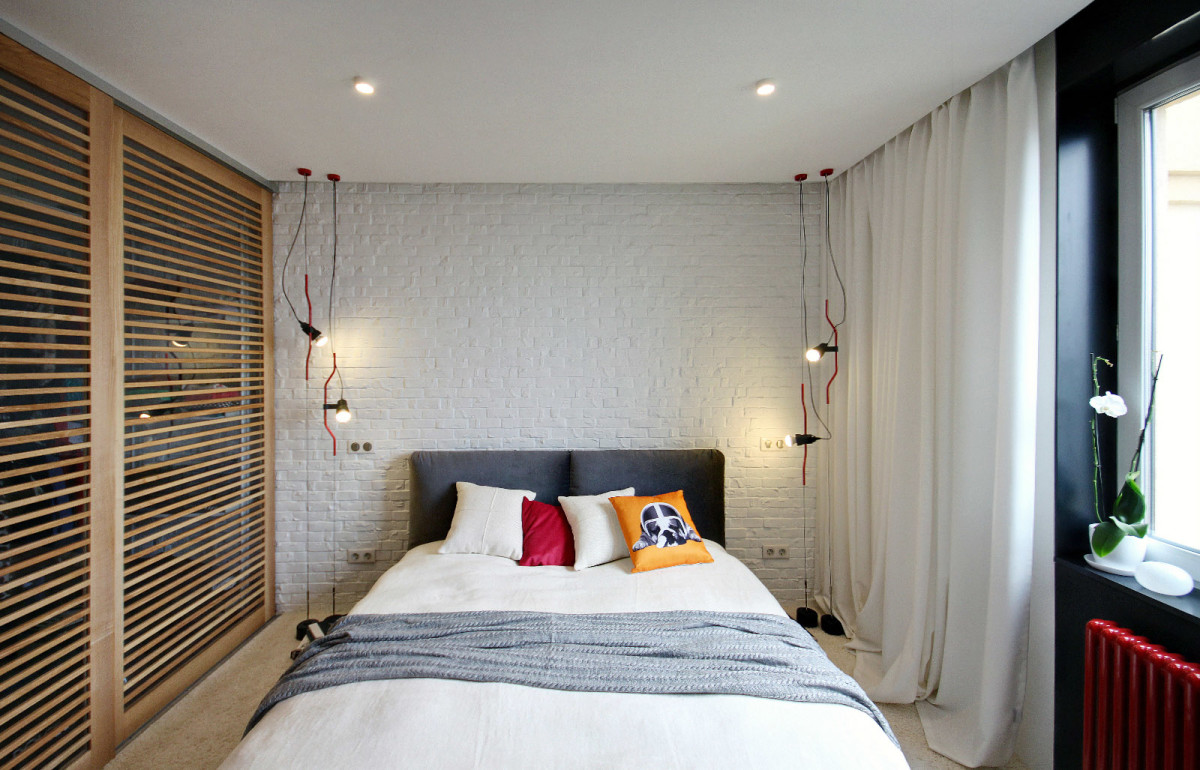 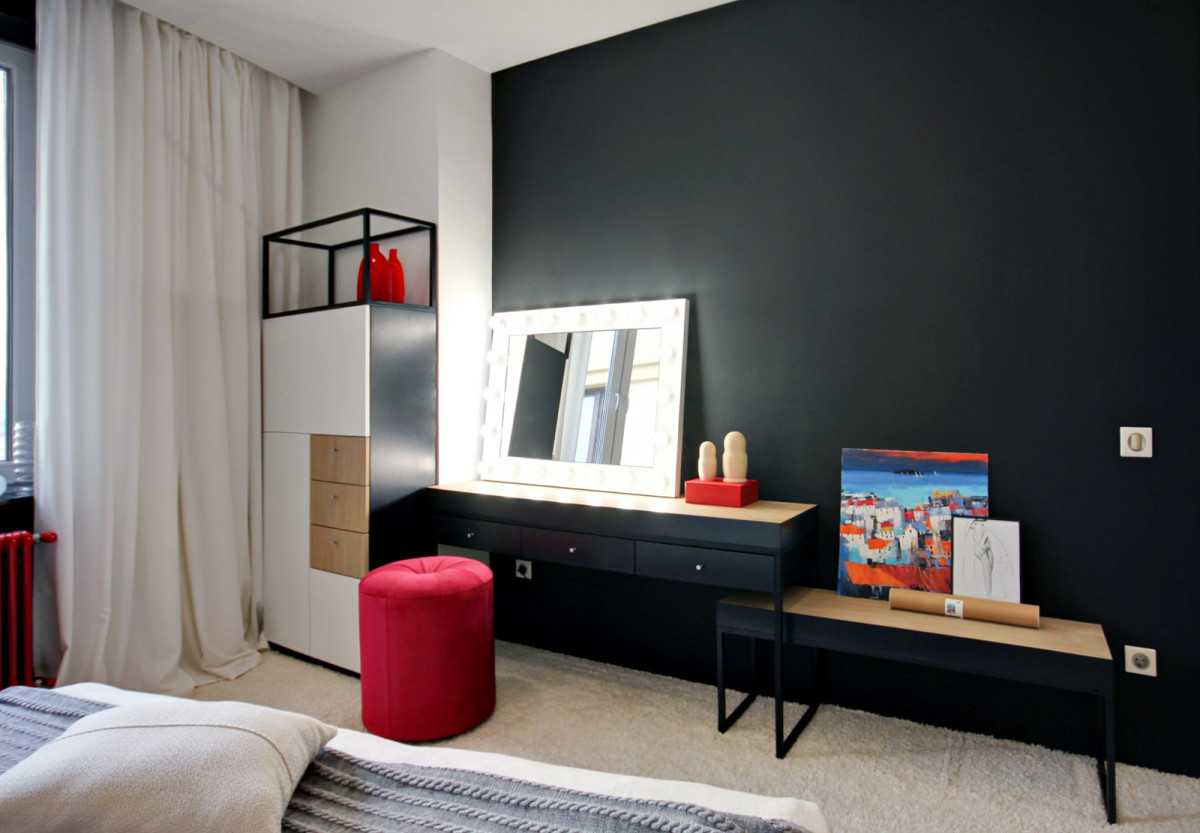 On the subjects of furniture and decor

It is worth noting that all the furniture, except the couch Togofrom Ligne Roset according to Michel Dukaroy's design and bar stools, is made in Kiev according to the author's drawings in Studio Manka. Fixtures brought from Italy: in the living room - suspension Diesel Foscarini, and in the bedroom - religious lamps Parentesi for the design of Aquila Castiglioni for Flos, point from Fabbian and sconces from Linea Light. 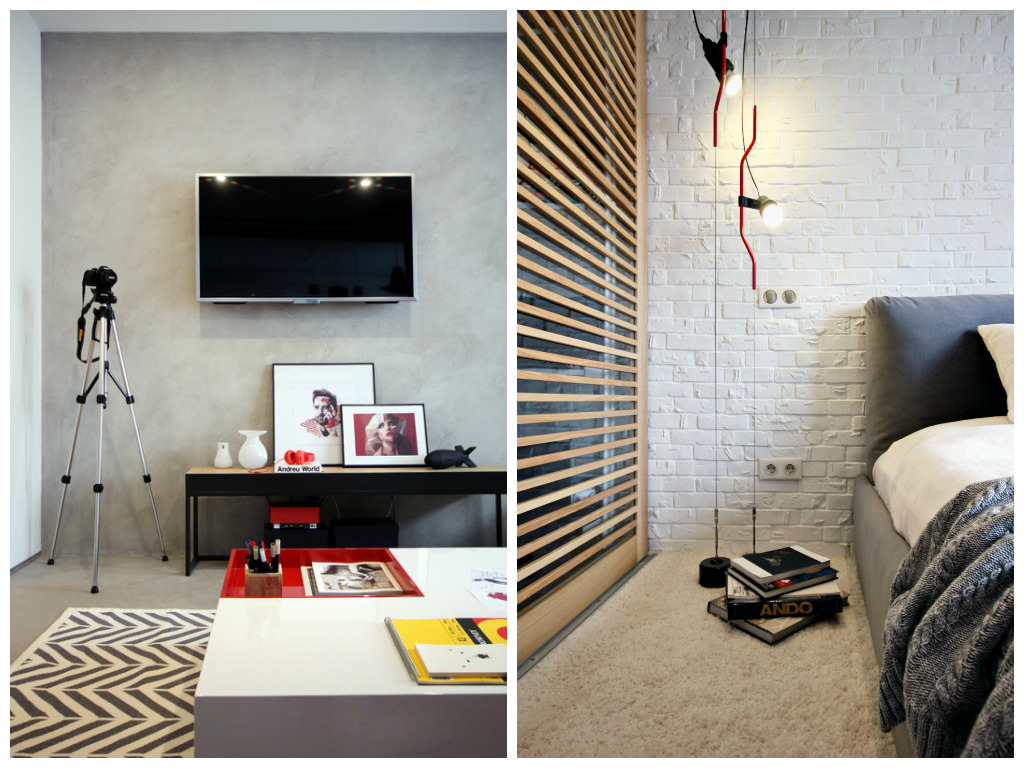