How to make a loft-style interior in a new building,where there is nothing but concrete walls and ceilings? The architects managed to answer this question in their project of a yuppie apartment. Many are familiar with concepts such as open plan, concrete box, load-bearing structures. Especially this remark concerns the owners of new apartments in frame-monolithic houses, who, having received the keys, wander through the empty premises. It is to them that the interior design project, which was created by the architects of the Tor-Ard bureau, is addressed, since in it they were able to competently combine the strict aesthetics of concrete and design elements in the popular loft style. Mikhail Yegiyan, architect and engineer Graduated from MGSU (MISS). In 2004 he founded a construction company, in 2006 - a design studio, in 2012 - an architectural bureau "Tor-Ard". Leader of a team of specialists who bring quality interiors to life. It is known that the loft style arose as a result ofconversion of industrial enterprises, old workshops and factories into residential buildings. This predetermined their large area, brutality, the presence of concrete and steel structures, brickwork, high ceilings and windows. In the realities of Russian cities, such real estate is being converted into offices, therefore, in ordinary apartments, lovers of this style have to portray some of its illusion. In new buildings, this is facilitated by real structures. It is enough to sand the walls, cover them with water-soluble varnish, add imitation of brickwork here and there and run open wiring directly along the walls and ceiling - and the loft-style interior is ready. And the industrial look of the space can be smoothed out by natural wood floors and designer furniture. 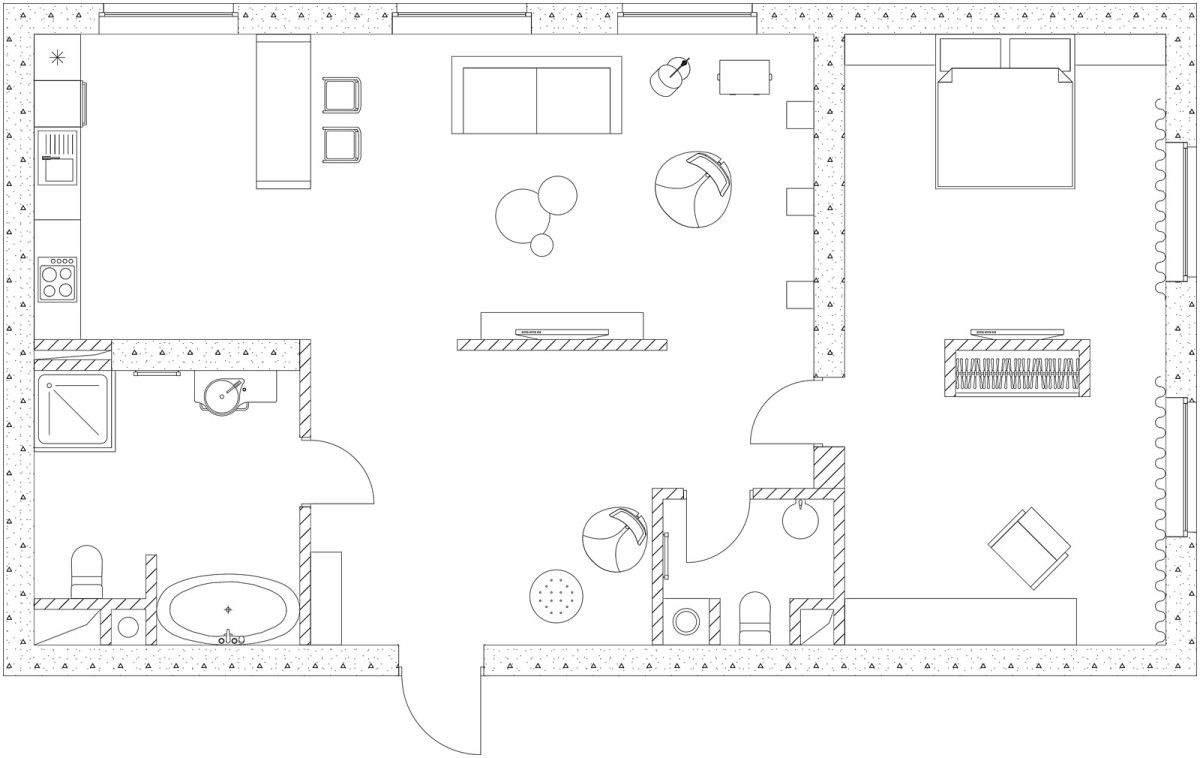 The layout of the apartment was predeterminedthe location of the risers and load-bearing walls. In this there is nothing unusual. Attention should be paid to the zoning of space not reaching the ceiling of the walls. With their help the hallway is separated from the living room, the bedroom - from the office. They also carry a functional load - they serve as a support for the TV and fencing the closet. Lighting does not happen much

The project implemented several scenarioslighting, otherwise such an apartment (given the number of sunny days in the year and the total depth of the room) should not be adequately covered. There are rail systems, overhead and hanging lamps, recessed boxes and LED lighting, which are controlled by an intelligent system.

Ceiling plasterboard ceilings serve, as it were,framing for a concrete slab overlap, which was left open. This contrasting combination emphasizes interior elements in loft style. Also in these ceilings are hidden wiring, lighting and ventilation. 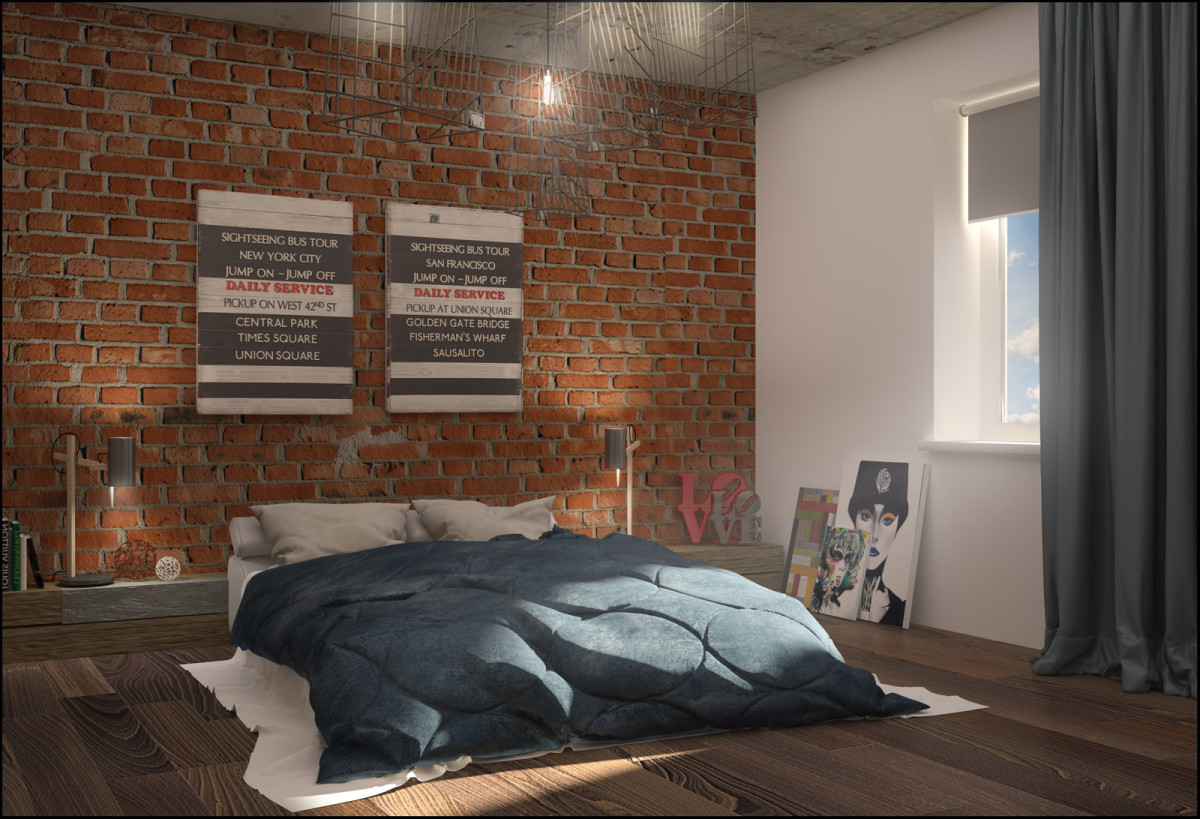 With the current variety of finishing materialsit will not be difficult to decorate the walls for a brick. There are even imitations of artificial stone and ceramic tiles. For example, you can reproduce the masonry of a Chicago factory or British manufactory. Against this background, vintage posters, photographs and artwork will look great. 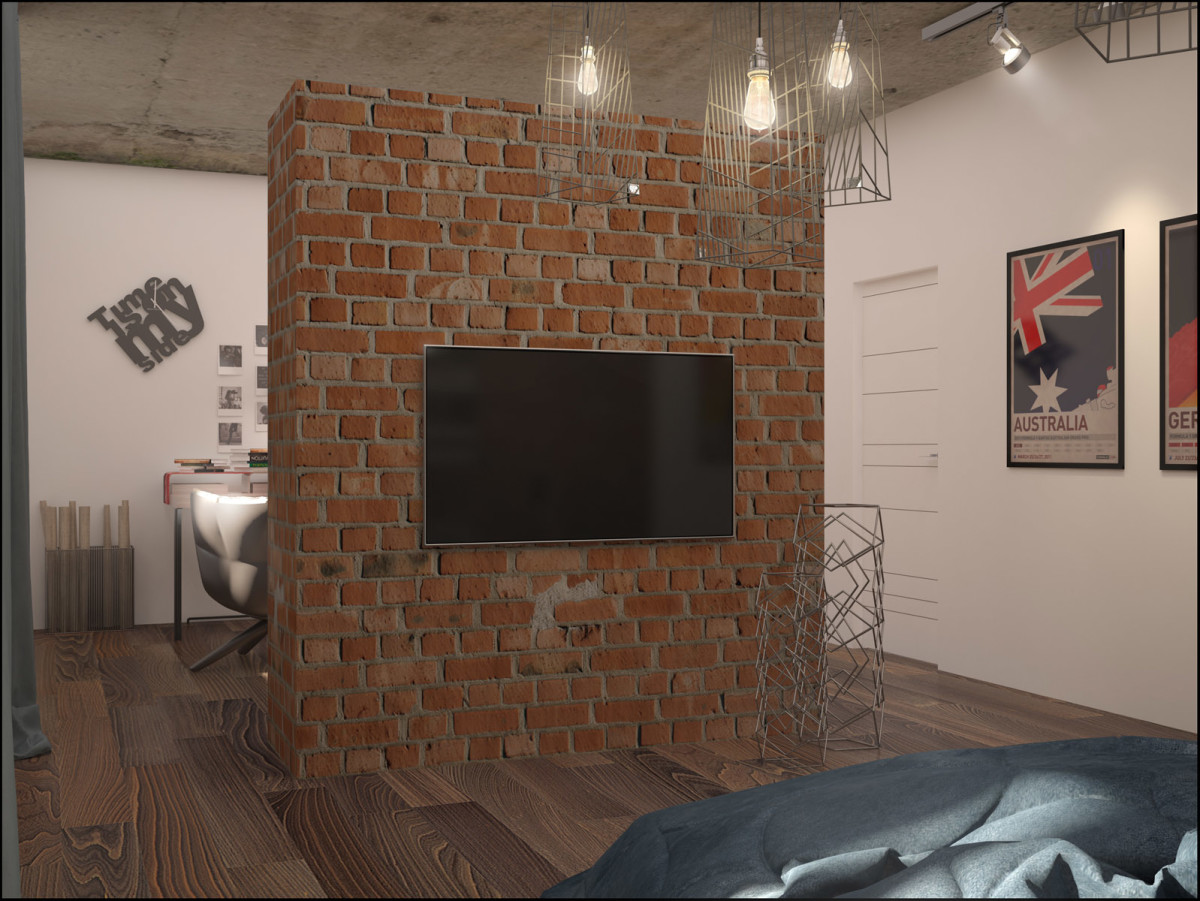 The partition in the bedroom divides it into the actualbedroom and study. This design is interesting in that it is not just a wall, but a roomy closet on one side and a TV stand on the other.

Bathroom in a trend

If it were not for "brickwork", it was quite possibleto admit that this bathroom took part in the leading world exhibition in Bologna (Italy). In stock - all key trends: graphic tiles, texture of concrete, minimalistic furniture, plumbing and stone bath.