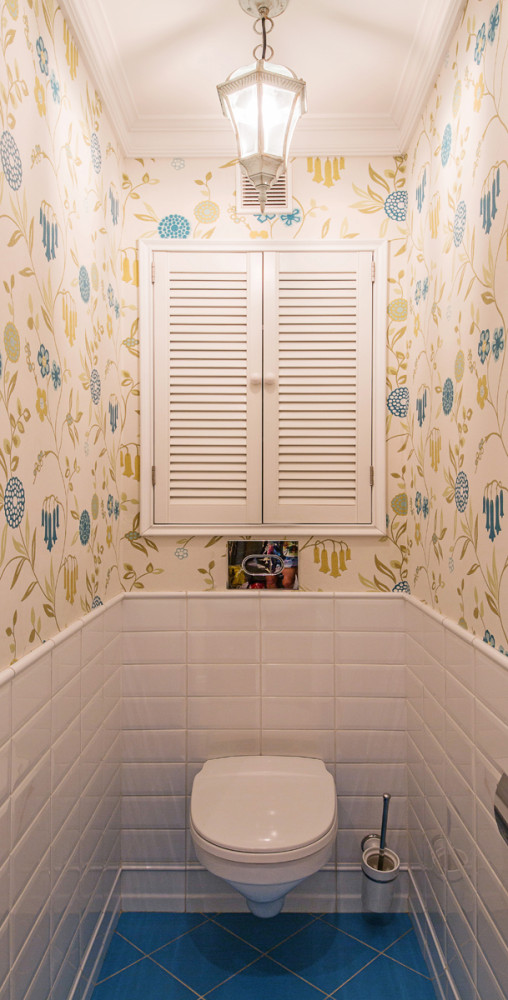 How to place a bedroom on a 41 square meter,a nursery for two children and a living room? How to competently divert attention from the modest size of the apartment? Understanding the example of a new project by designer Lydia Bolshakova When presenting a three-room apartment for a family with two children, we most often imagine a spacious dwelling in our imagination. But what if the owners have only 41 square meters at their disposal, on which they need to place all the necessary premises and get a bright and functional interior at the exit, making them forget about the real dimensions of the apartment? The founder and head of NW-Interior easily coped with this task. Lydia Bolshakova, designer Graduated from the Kuban State Technological University and the Higher School of Design of the Moscow Architectural Institute. For eight years of successful work, she has implemented more than 40 copyright projects. Currently, Lydia Bolshakova is the founder and head of the NW-Interior studio. www.nw-interior.ru To visually increase the space, a small kitchen with an area of ​​4.5 sq. m was combined with the living room, having received a total space of 13 squares. For the main bedroom and the nursery, rooms were given approximately equal in area. Also in the apartment there was a place for two bathrooms - an area of ​​2 and 1 sq. m. 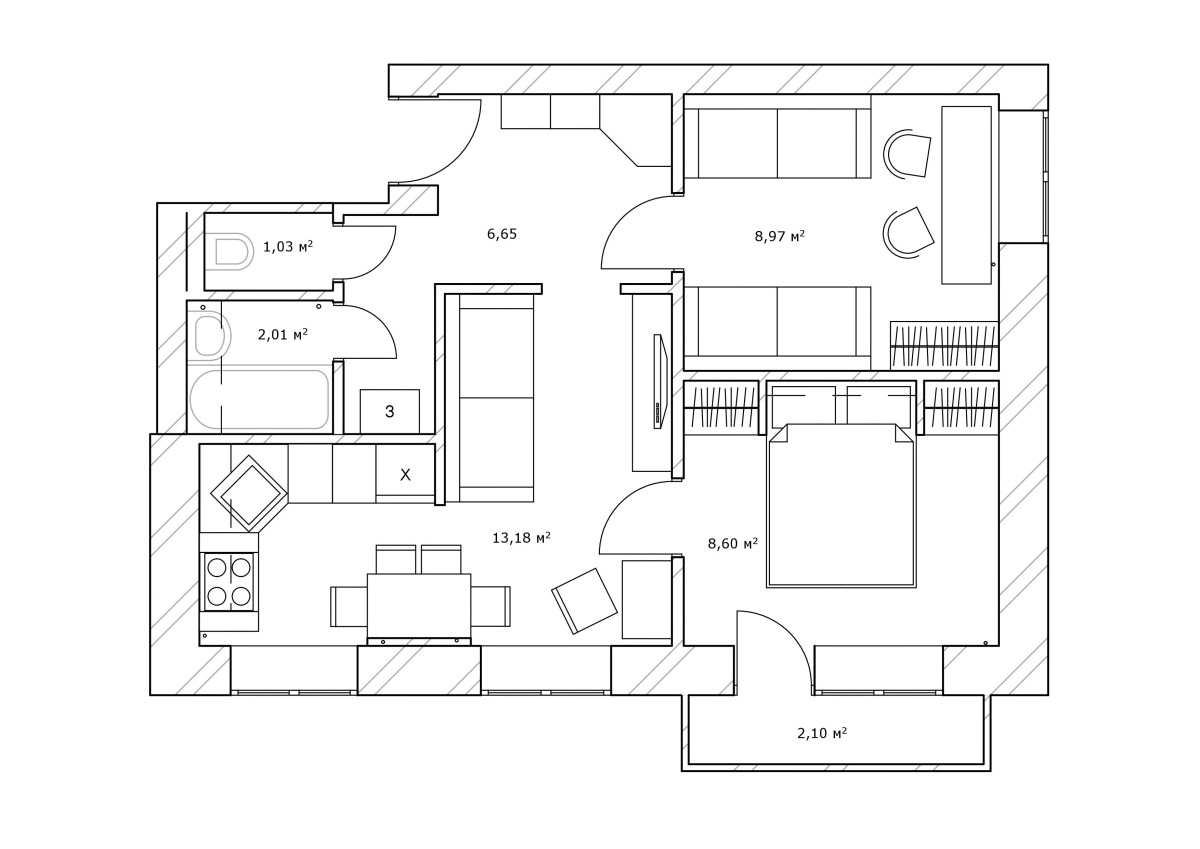 To divert attention from the modest square of Lydiadecided with the help of bright colors and competent arrangement of furniture. So, for a drawing room the designer has chosen a green sofa, has issued the TV-group in neutral scale and has allocated a corner for a workplace at a window. 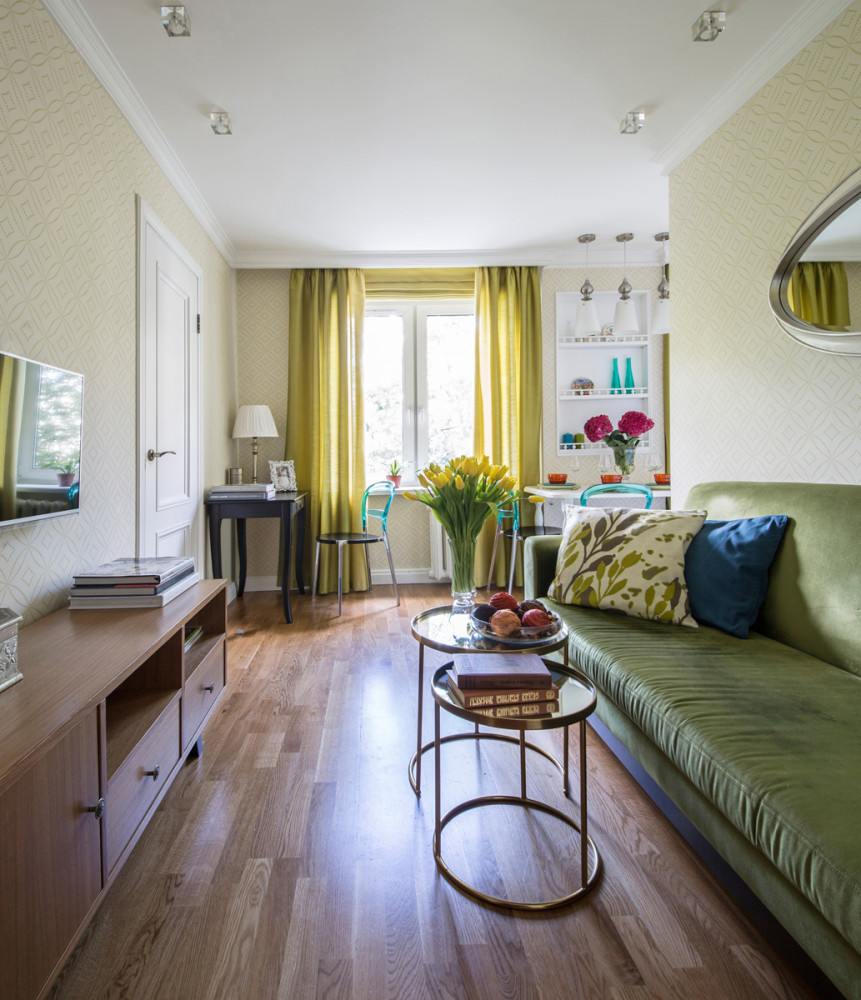 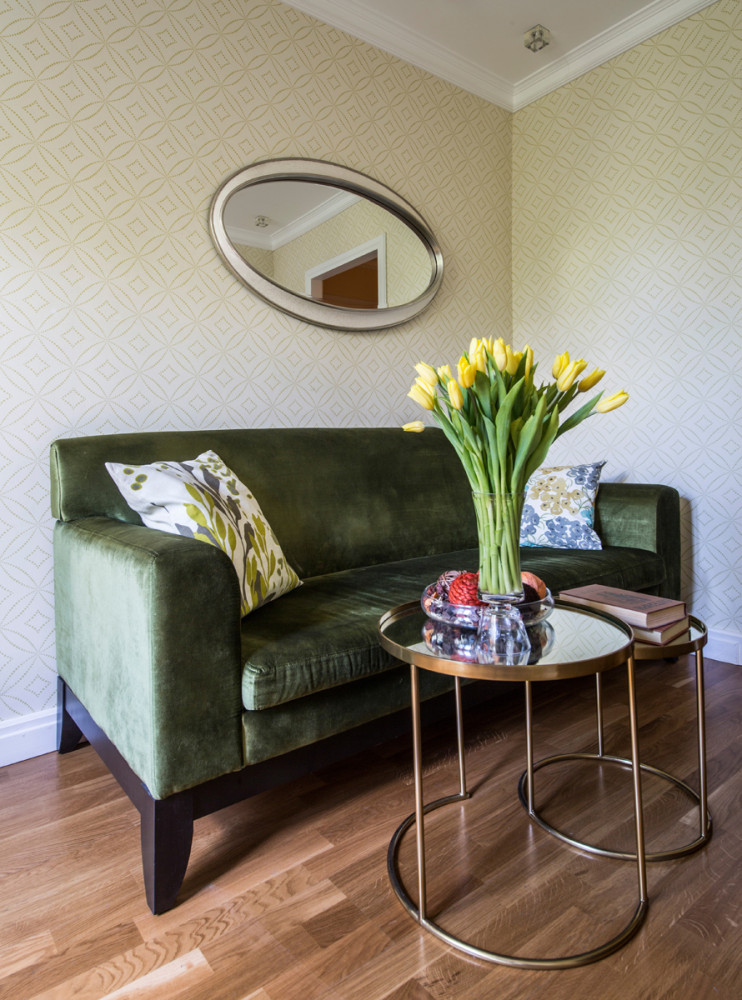 To visually make the living room a bit more spacious,The walls were covered with light wallpaper with a non-contrast pattern, and the ceiling was left white. At the same time, due to rich colors - yellow curtains, dark blue table, chair with turquoise back and bright decorative textiles - the interior does not look boring. 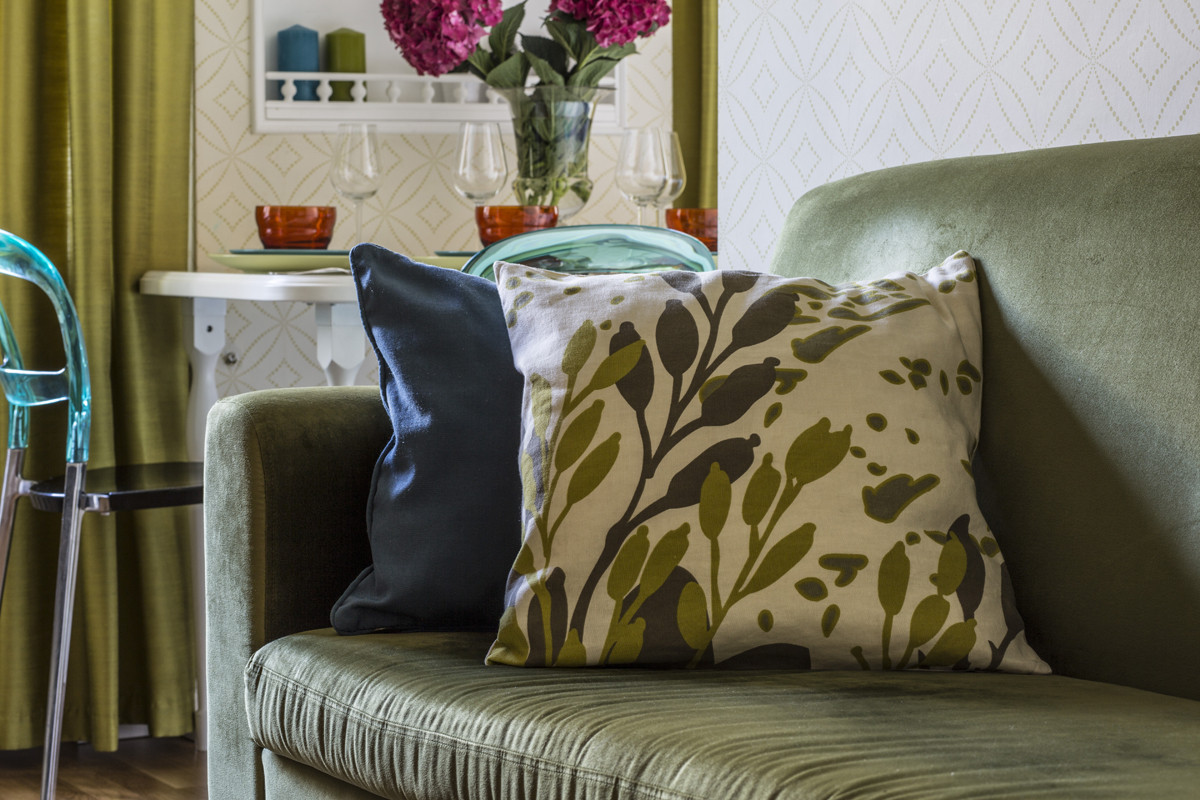 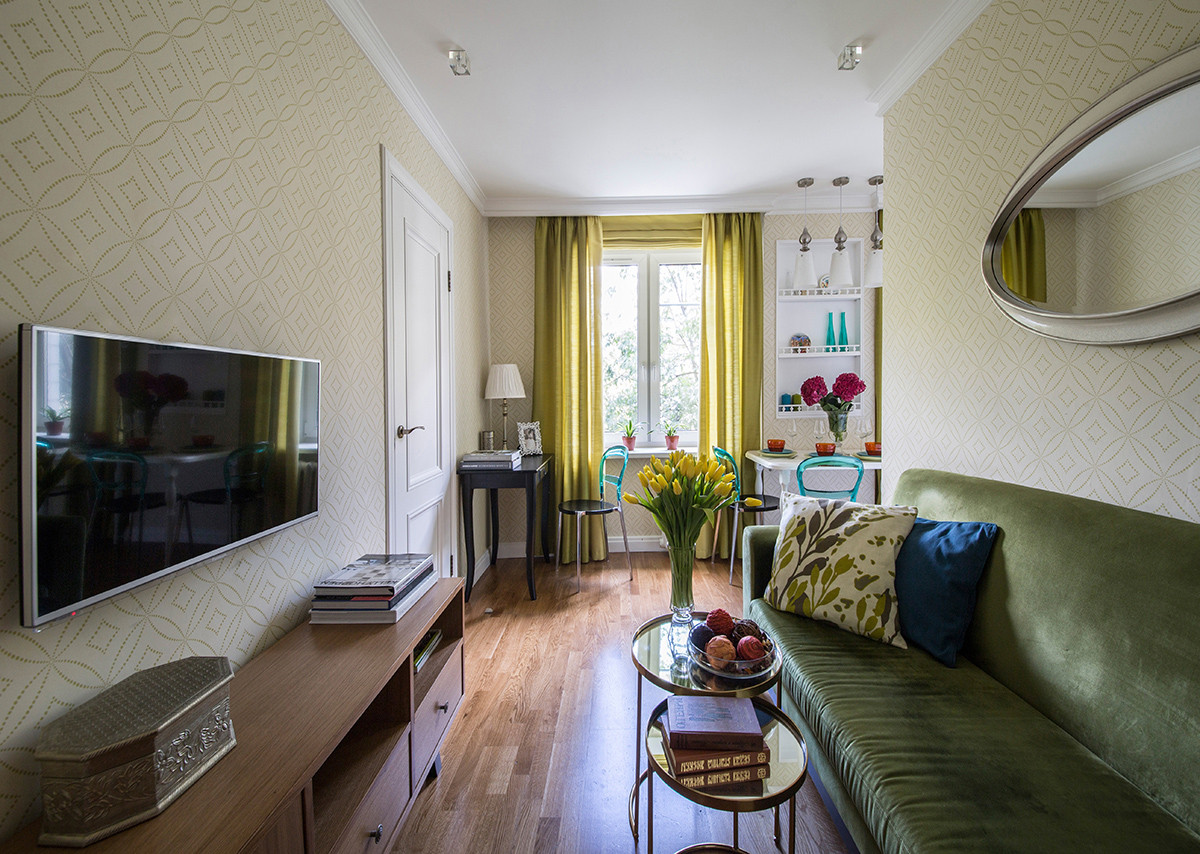 In the kitchen-dining room there was a place for the kitchenheadset from IKEA and a full-fledged dining area. Above the table is a decorative niche formed after the heating stairs near the windows were sewn. This "gift" the designer used to organize additional storage, having arranged in a niche three small open shelves. 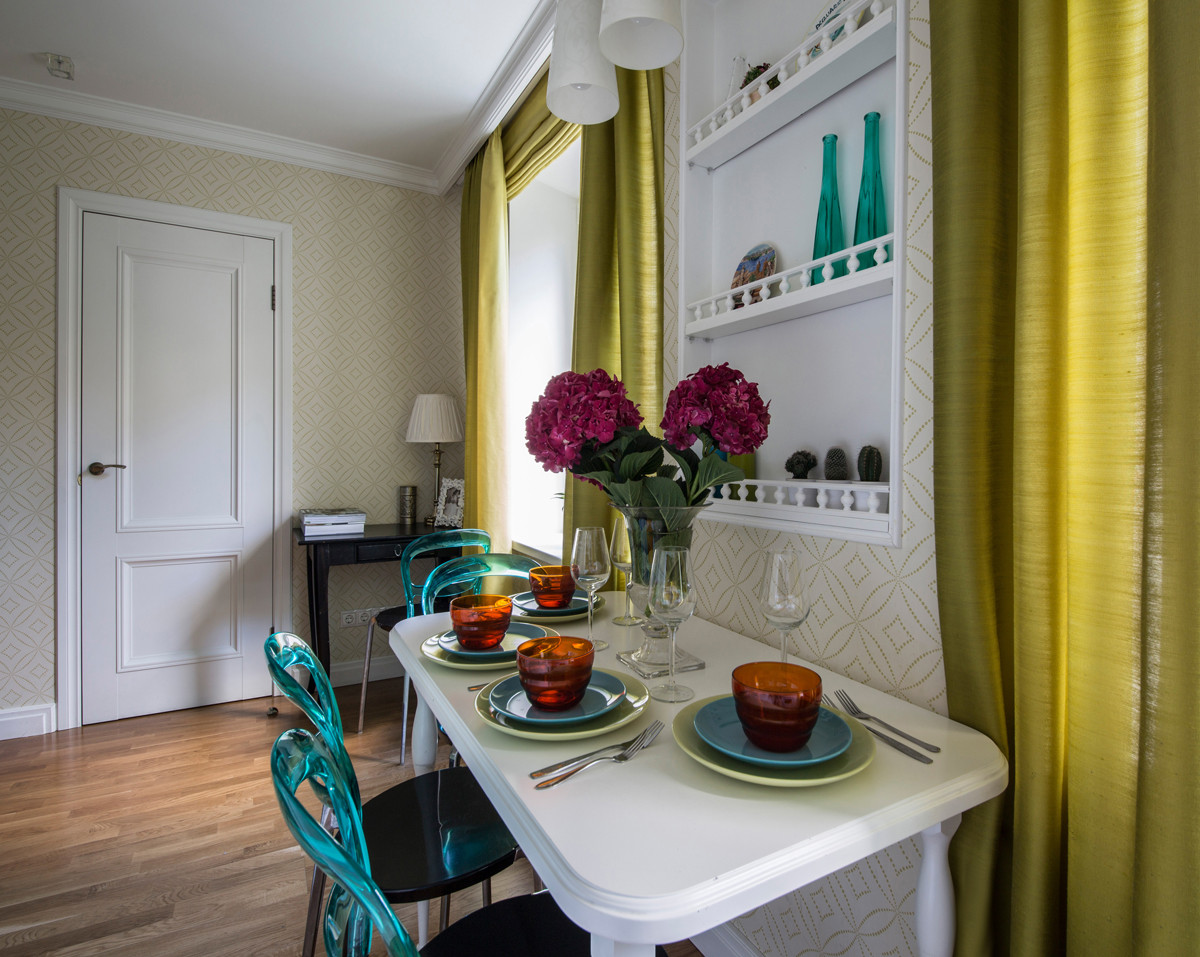 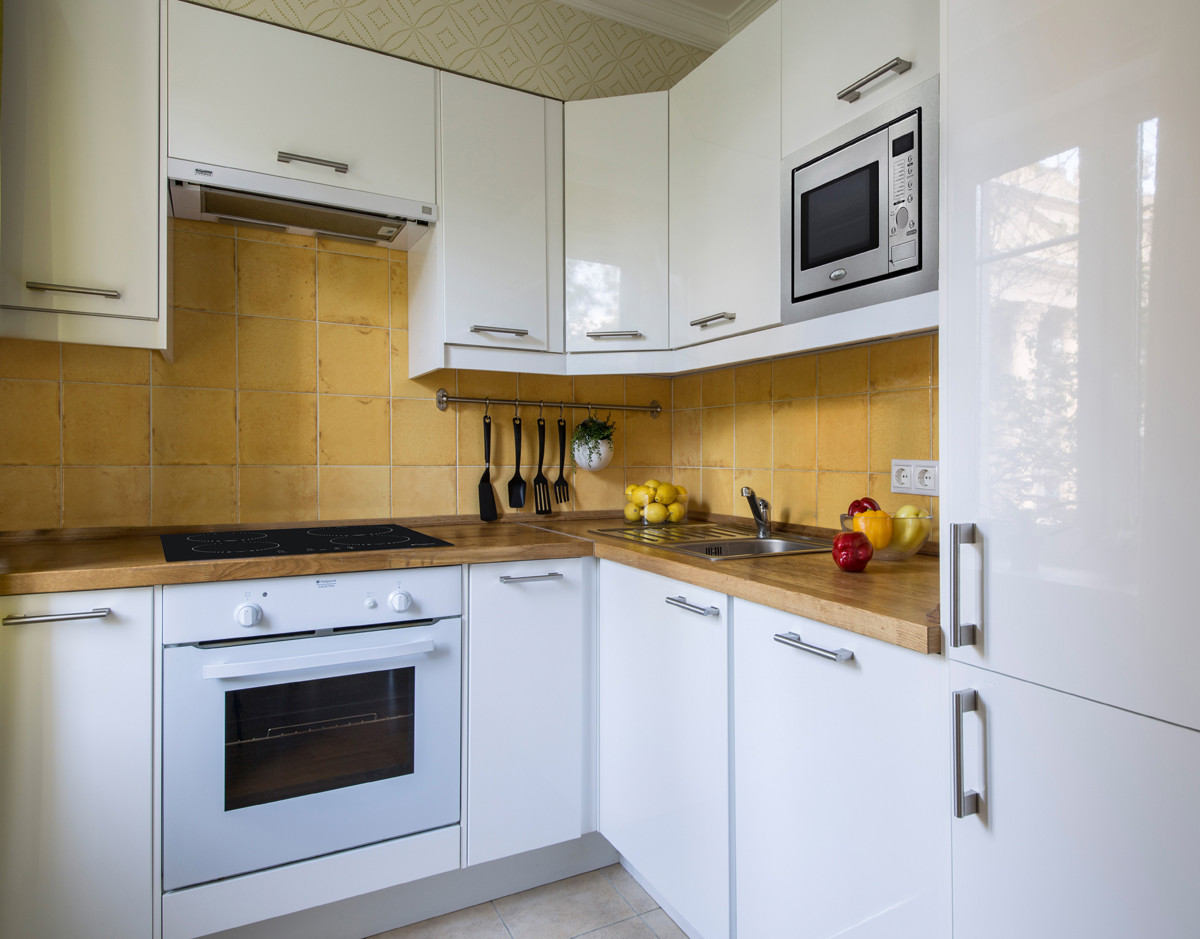 Zone of preparation and reception of food visuallyseparated by a different flooring: a parquet board and tiles. This method allows you to visually distinguish the functional parts of the room without additional cumbersome zoning tools: partitions, screens, etc.

In the kitchen and living area there are no massivedecorative elements like large paintings, posters or figurines - this avoids the feeling of tightness and clutter. The brightest elements of the decor are fresh flowers that add freshness and additional natural colors to the interior. 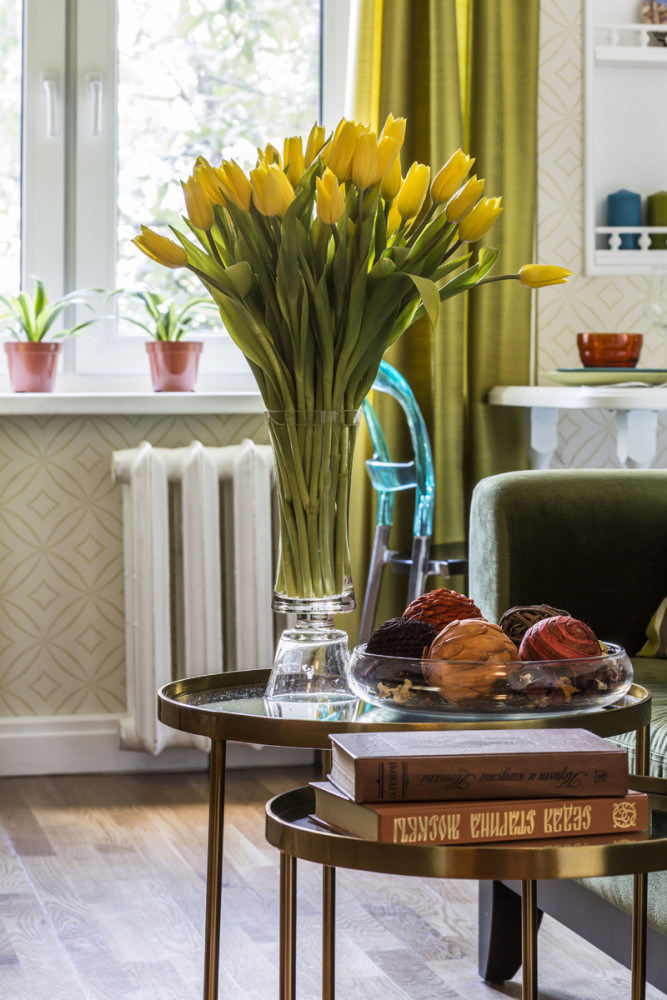 Unlike the rest of the premises, the color scheme is very calm and gentle, attuning to relaxation. Furniture - only the most necessary: ​​a large comfortable bed and two wardrobes. 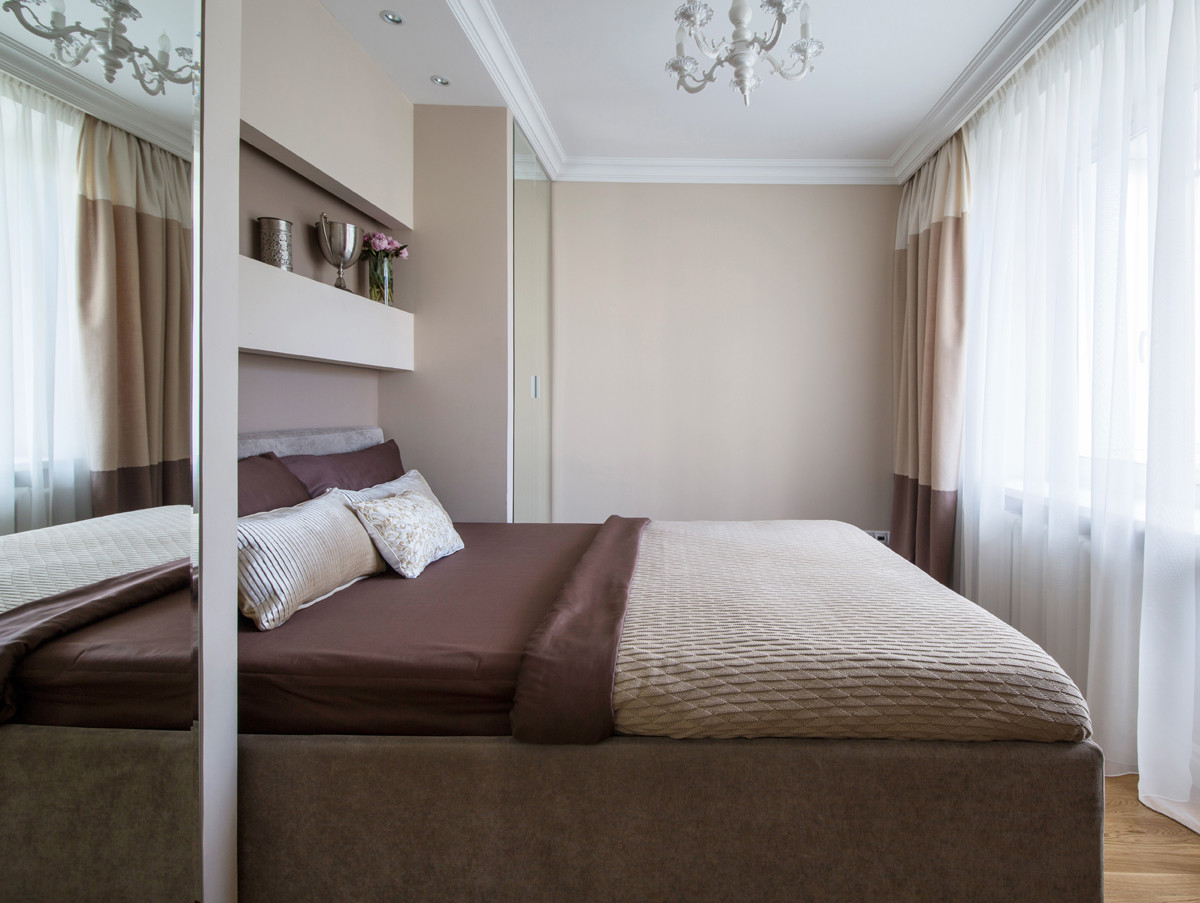 In this room everything also works for a visual increase in space: mirrored cabinet doors and an easy shelf in a niche instead of bulky bedside tables. 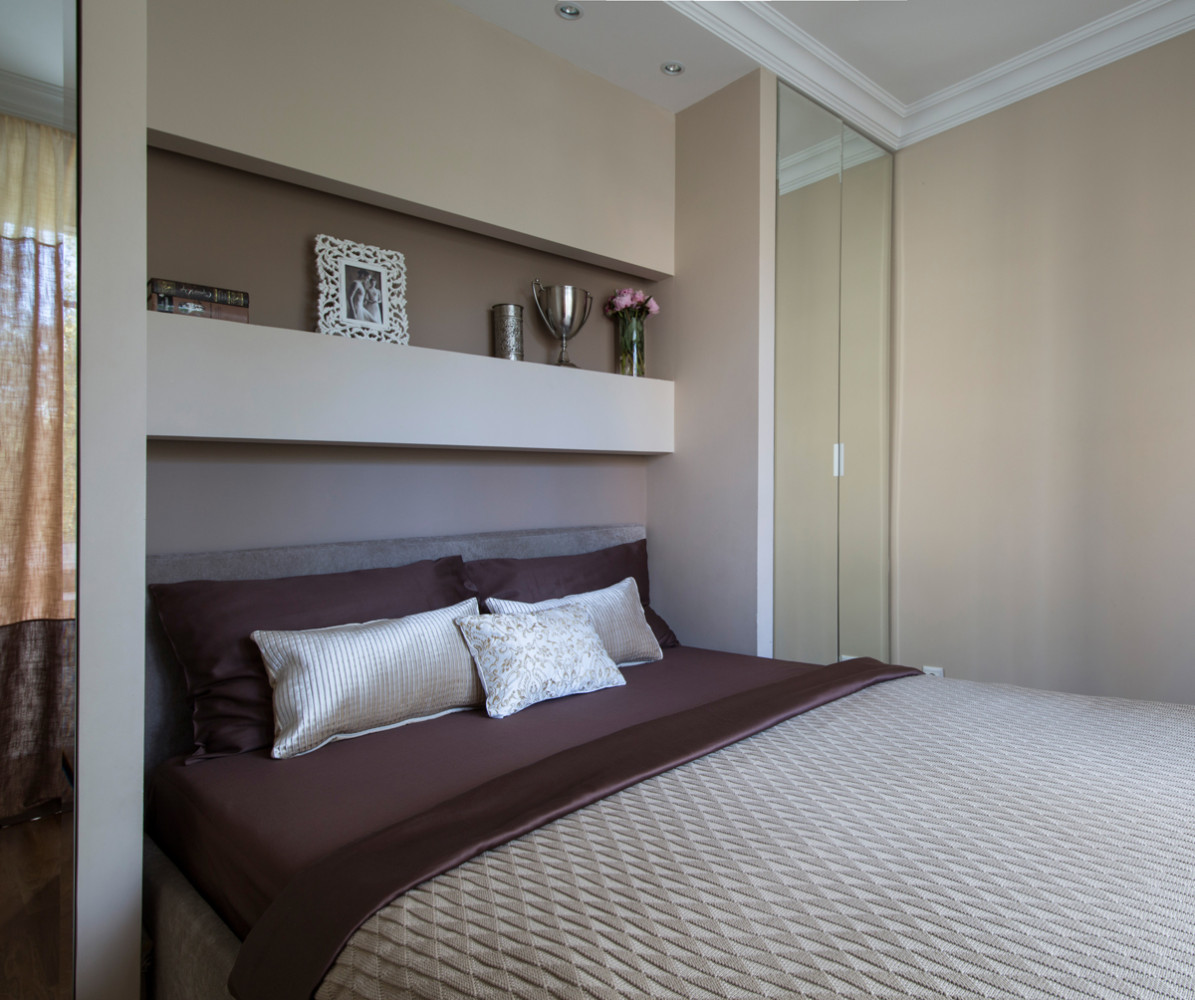 In the nursery, common for two children, the walls are paintedin four shades of yellow: gradation from dark to light. This reception also allows you to make the room more spacious. At the same time, the designer did not forget about the color accents: here they are curtains with a picture, bright chairs, decorative pillows and, of course, fresh flowers. 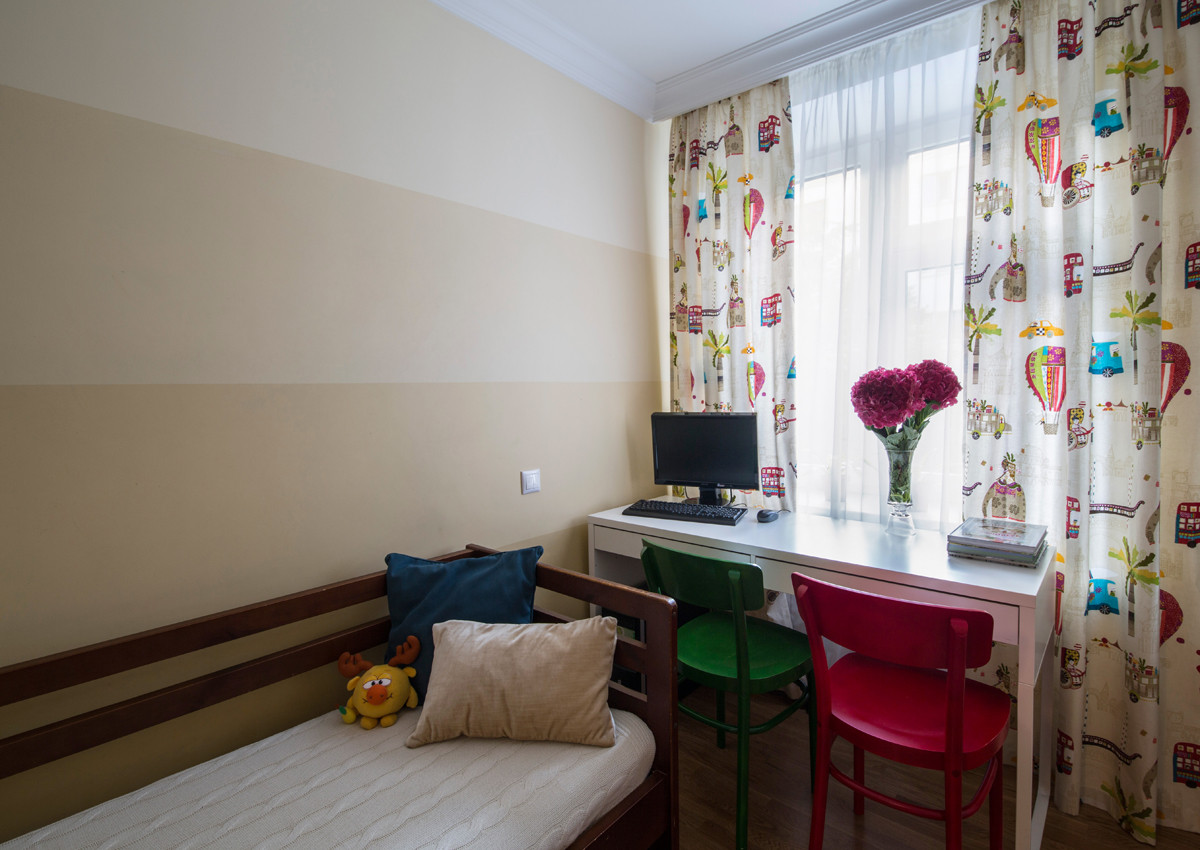 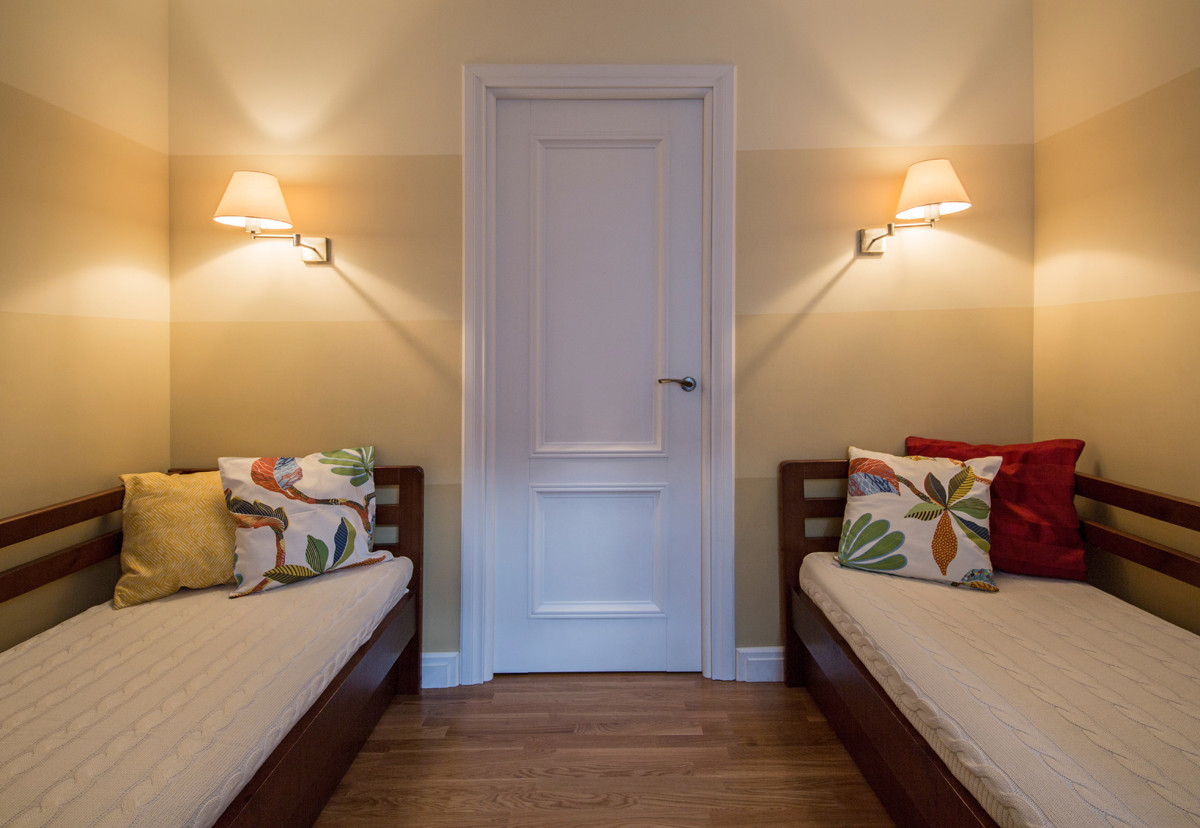 To place on an area of ​​9 square meters everything necessary for two children, it was decided to allocate one workplace for two and put a room in a room a large wardrobe - also a common one. 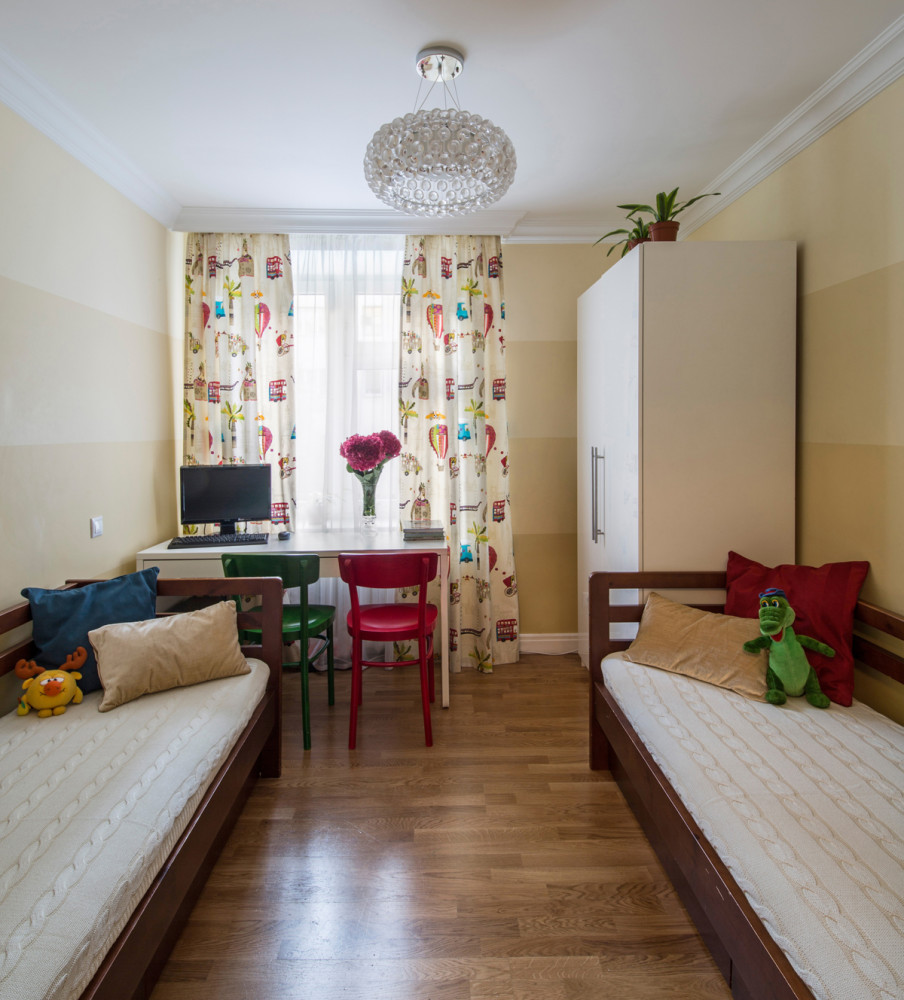 Tiles were used to decorate the bathroom.at the bottom and English Harlequin wallpaper at the top for a fun and positive look. All communications are hidden behind shuttered doors that look like shutters.

In the interior were used: Kitchen-living room: