This interior was created under the inspiration ofworks of the famous decorator Kelly Whistler. Golden ceiling in the bathroom, a lot of black and recognizable by all lovers of design style. Already this is enough to get interested. But here also the redevelopment is crazy: from two rooms were made three

We are for courage and bright decisions! This project pleased the entire editorial staff in the first place with the willingness of customers for bright, original ideas. Tatyana Aryutova, designer-decorator

In 2015, she completed a refresher course for practicing designers.

Throughout the year he visits thematic exhibitions, master classes, and listens to lectures.

He studies a lot, since he believes that only by studying you can be aware of the latest and future trends. By the way, the Roomble portal is one of the sources of new and useful information.

"Design for me is my whole life. Even third-party hobbies are to a greater or lesser degree related to interior design and decoration. "

Initially, this apartment was planned astwo-room. Two spacious rooms, a kitchen of 20 square meters, a large corridor. Customers constantly live in another city, and this apartment was purchased to come to Moscow not to stay in a hotel, but on its territory. They are so comfortable.

The owners did not plan a lot of cooking, sodecided to reduce the kitchen, move to the corridor and close the living room with an internal sliding partition. On the site of the kitchen, the cabinet was planned, since customers come to Moscow primarily on working issues.

The dining room was placed between the living room and kitchen area, closed by a glass partition Rimadesio. 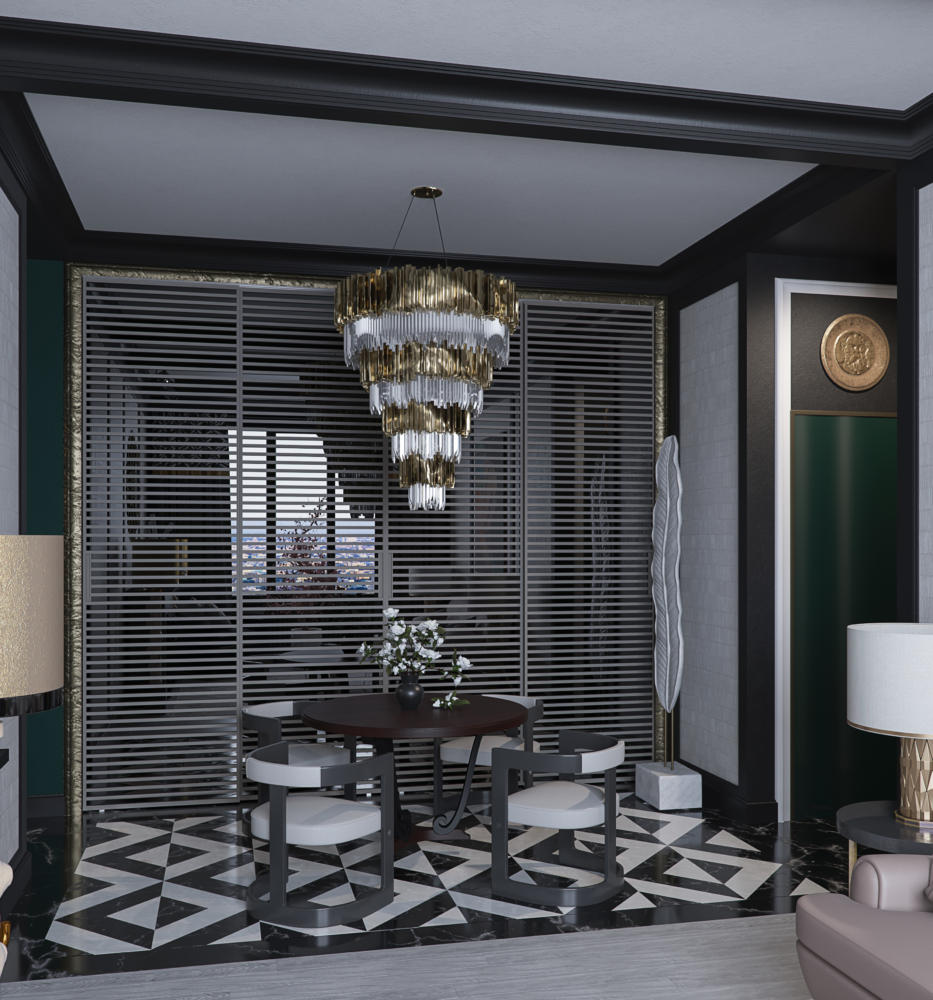 The corridor was originally very large. Therefore, in addition to the kitchen, we managed to accommodate two spacious bathrooms. One large, with a bathroom and a fenced off toilet and bidet, the second - with a shower and a washing machine. Customers do not like wardrobes in the rooms,so the designer was tasked with placing spacious wardrobes. One dressing room is located at the entrance to the apartment. The second big one turned out to be a checkpoint, through which you can get into the master bedroom. This move gives two significant advantages: the rejection of unnecessary corridors and additional sound insulation of the bedroom. 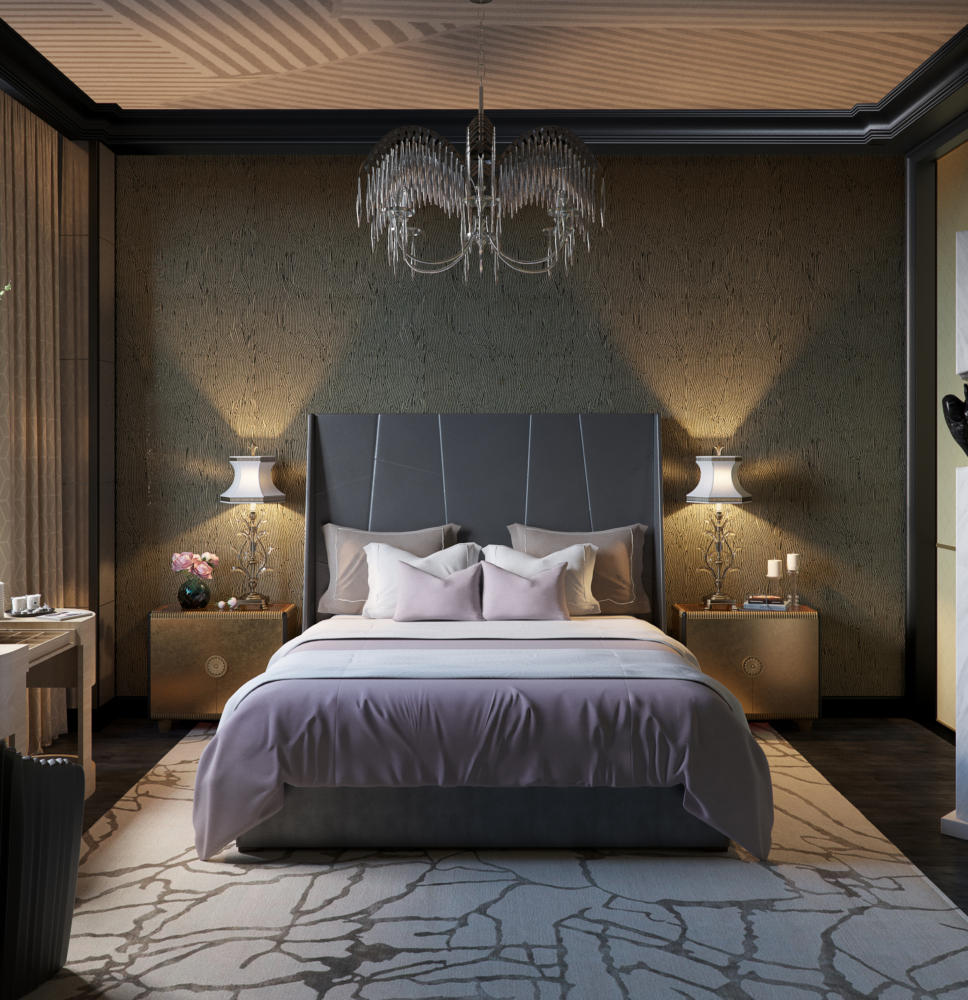 Customers did not want to use bright colors, they tended to noble muted shades. Uniting the color scheme of the apartment was a black color, but not in large volumes, but dosed in detail. Lighting has planned a multi-level, that is,each room has a main light source and a few additional ones that can be switched on depending on the mood or if necessary. For example, a floor lamp for reading near a chair, a chandelier over a dining table. 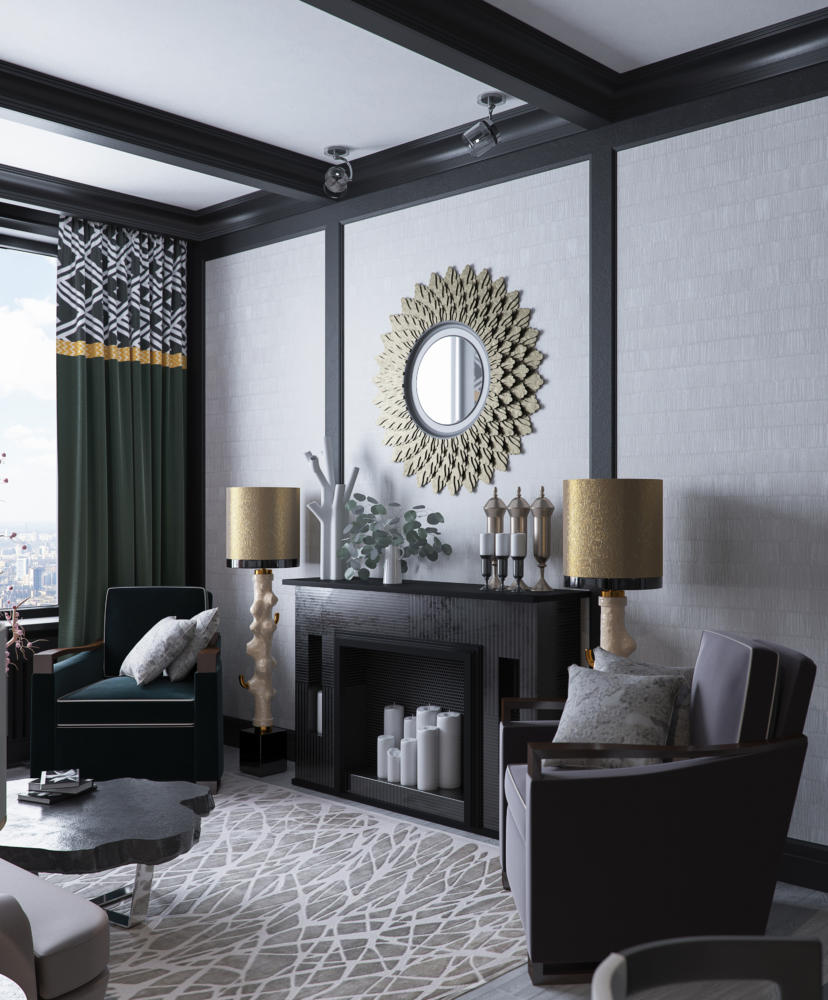 The bed and bedside tables in the bedroom are planned to be made to order on one of the Russian productions.

Chandelier - John Richard. The design of the whole bedroom began with this chandelier. She was seen by chance and decided that the interior would stand around her.

Table lamp - Fine Art Lamps, model 737810, it differs in stylistics from the chandelier, combines their plant themes and metal.

The carpet is The Rug Company, Tracery Rug, Kelly Wearstler.

No wallpaper found in the project (designthere is - Avant wallpapers from Kelly Wearstler, but there is no color), the designer plans to take a picture, correct it and order it at the Moscow wallpaper factory.

Two decorative columns on both sides of the window are framed by an aged mirror. A chair by the dining table is Zuma by Kelly Wearstler. The designer admits that he has recently been actively monitoring the work of American designer Kelly Wearstler. Tatiana likes everything that Kelly creates: interiors, furniture, decorative items, textiles. The author of the project is always pleased to use the objects created by her in her projects.

Decor items of these two creative designers are harmoniously combined.

Chandelier above the table - Luxxu Empire. Do not be afraid of large chandeliers in small rooms. If their placement is thought out and justified, they will decorate the interior, make it special.

Chairs - Donghia, Club Chairs. Two identical chairs in two different colors. It is on the combination of these colors that the color scheme of the living room is built.

The designer was looking for a white wallpaper with a barely readable texture. Many options were looked at, but it was the Belgian Khroma wallpaper (Akina collection, article AKI 302) that fit perfectly. Moldings on the walls, decorative beams, skirting boards and cornices will be ordered in the carpentry workshop.

The picture in the living room is Carolyn Young, Somewhere Out There, Circa 2000. However, there is no certainty that it will be acquired.

The carpet is Rug Star Dresden. 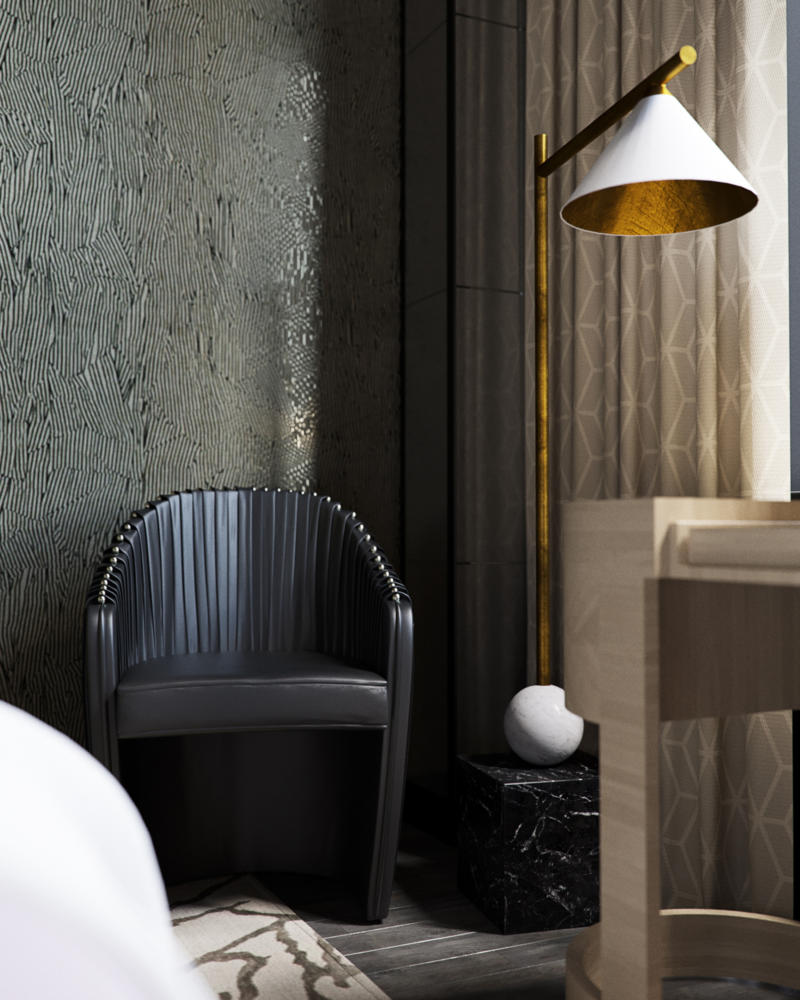 Between the living and dining areas in the niche are placedthree interior doors (glossy, the ends are finished with a frame of brass, the order is made in the carpentry workshop). Two of them lead to the bathrooms, the third to the office. Each door leaf has a height of 2.3 meters, which is increased due to white casing and medallions over each door. On medallions - images of Lenin, Marx and Engels. The choice of heroes for medallions is in no way connected with the political views of customers, they just came up with a sense of humor to the choice of decor. 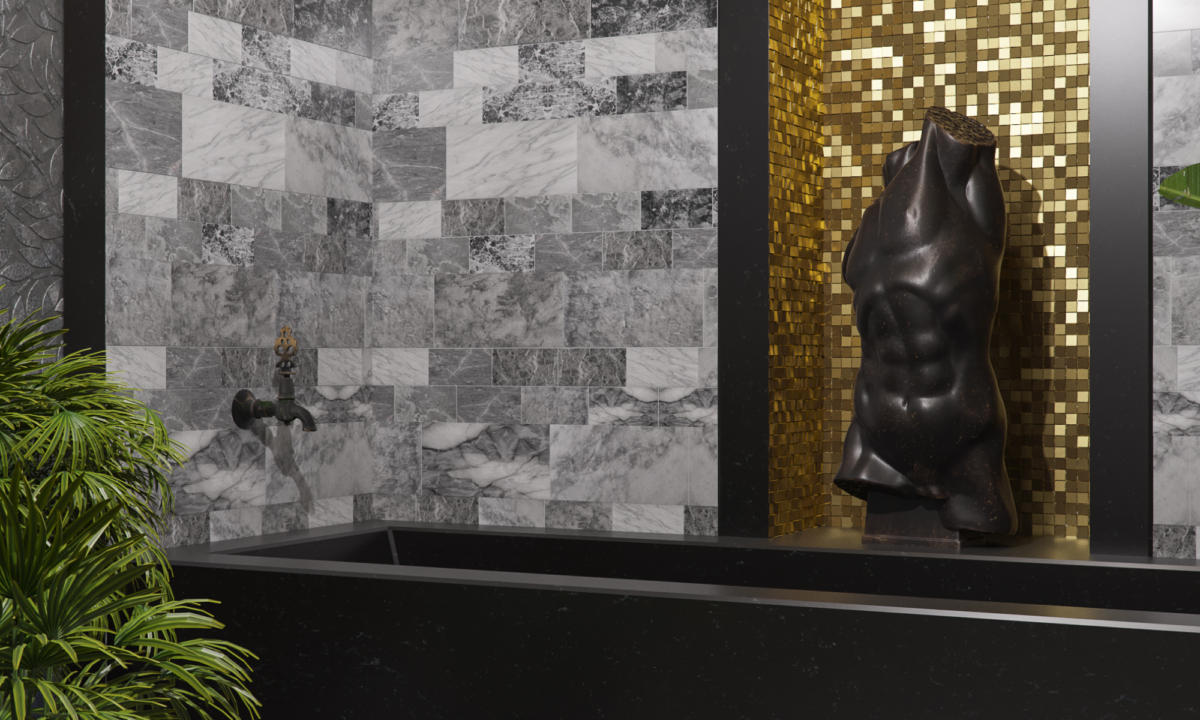 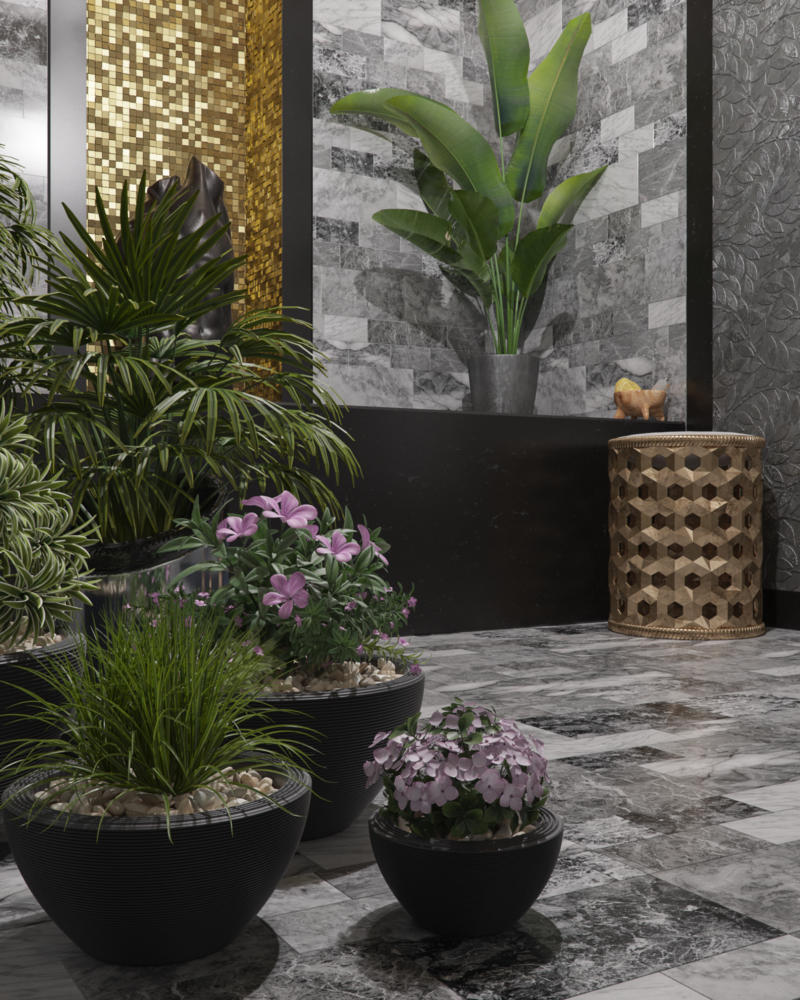 On the walls next to the marble is planned to use a mosaic in the form of a weave of leaves of Jacqueline Vine Stone Mosaic.

The main accent of the bathroom is sculpture, aroundwhich built the entire interior. The basis is taken sculpture Chelini, Art.241 Statua torso. Sculpture is smaller than necessary, so the designer will look for an alternative to the appropriate size or order work from a local sculptor.

Mosaic - gold Bisazza Mosaico / Colors / OroBis. The designer decided that, against the background of the golden mosaic, the black sculpture would look good. The gold mosaic from the niche "passed" to the ceiling for balancing the active black interior details.

Decorate and revitalize the strict interior of the plant.

Stylish interior: redevelopment and design of a three-room apartment for a young family

Design of a three-room apartment in the style of minimalism