If a girl has absolutely no time to cook andthe old cluttered kitchen does not inspire masterpieces, the time has come to radically change the interior. Today we will tell you about the renovation in Sveta's kitchen, which turned her life. The heroes of the next issue of the TV project "Made with taste" on TNT are a young couple, Sveta and Dima. They met at the institute, and initially their profession was associated with the sky. But life turned out differently. Today Sveta is the owner of a PR agency, and Dima is still engaged in aviation, disappearing on business trips and on tests. Because of the constant employment, the guys rarely see each other, and there is neither time nor desire to equip life. And the old cluttered kitchen does not at all inspire the hostess to culinary masterpieces - here Sveta works more than she cooks. Sveta and Dima, the owners of the uncomfortable kitchen, Sveta and Dima started dating at the Aviation Institute and have been living together for 6 years. But all this time, only his mother feeds Dima. Sveta completely immersed herself in her own business, and turned the kitchen into a home office! Sveta assures that the old uncomfortable kitchen is to blame for the fact that she does not cook, and Dima no longer believes that he will ever see his beloved woman at the stove. The "Made in Taste" team with designer Olga Povarova decided that the main task of the design project would be to create a so-called "flight control center" for the heroine, from where she would manage all the processes around: the stove, the oven, and the laptop. The second challenge will be to create a comfortable, functional and beautiful space to inspire the girl to culinary creativity. Olga Povarova, interior designer SG Stroganov with a degree in design. For 12 years he has been specializing in the design of residential and public interiors. One of the activities is the architectural design of low-rise buildings: country houses, cottages. Works in various stylistic directions: from modern to classical. Any interior is designed primarily functionally convenient, while not forgetting the importance of aesthetic perception. interior-as-art.ru

In addition to the general morally outdated look of the kitchen,in the old interior there was a catastrophic lack of lighting, there was no oven and there was a completely non-ergonomic arrangement of the working area and sink, and there was also a lack of storage space. The task of the designer was the most convenient design of the kitchen and the introduction of color and light sources into the interior so that this room becomes visually brighter and more spacious. 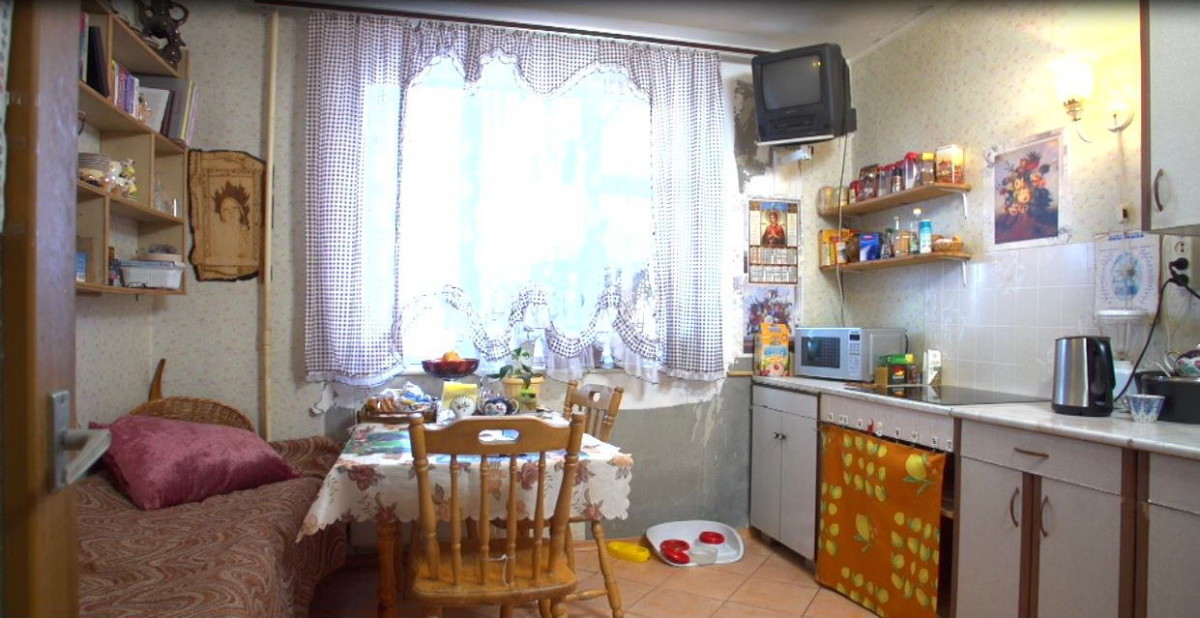 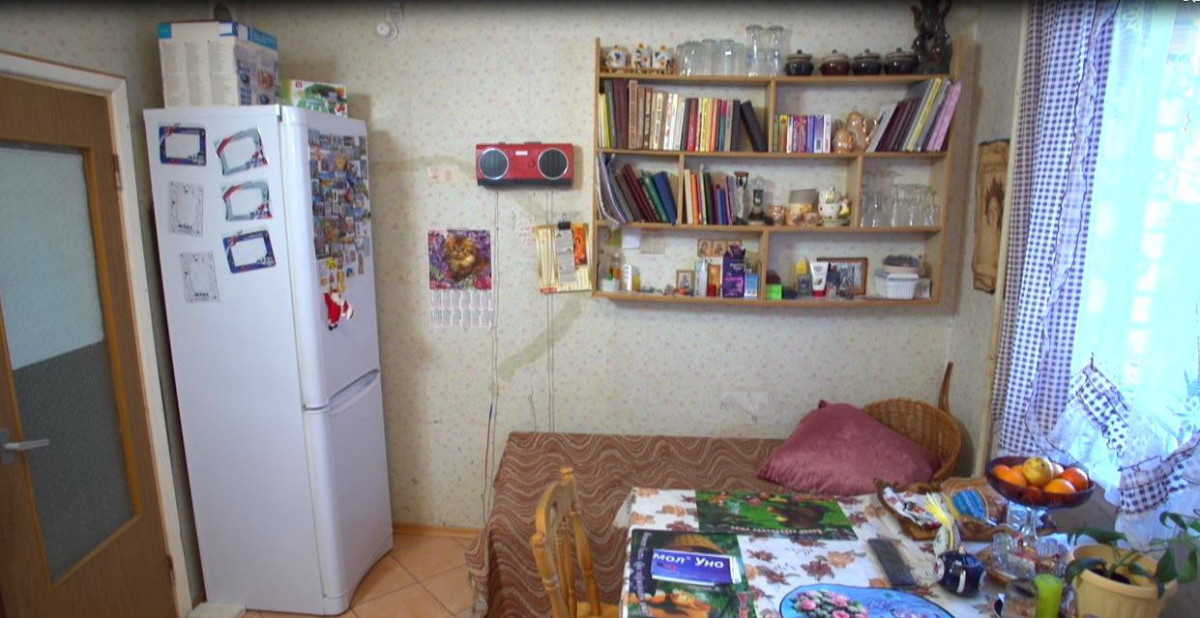 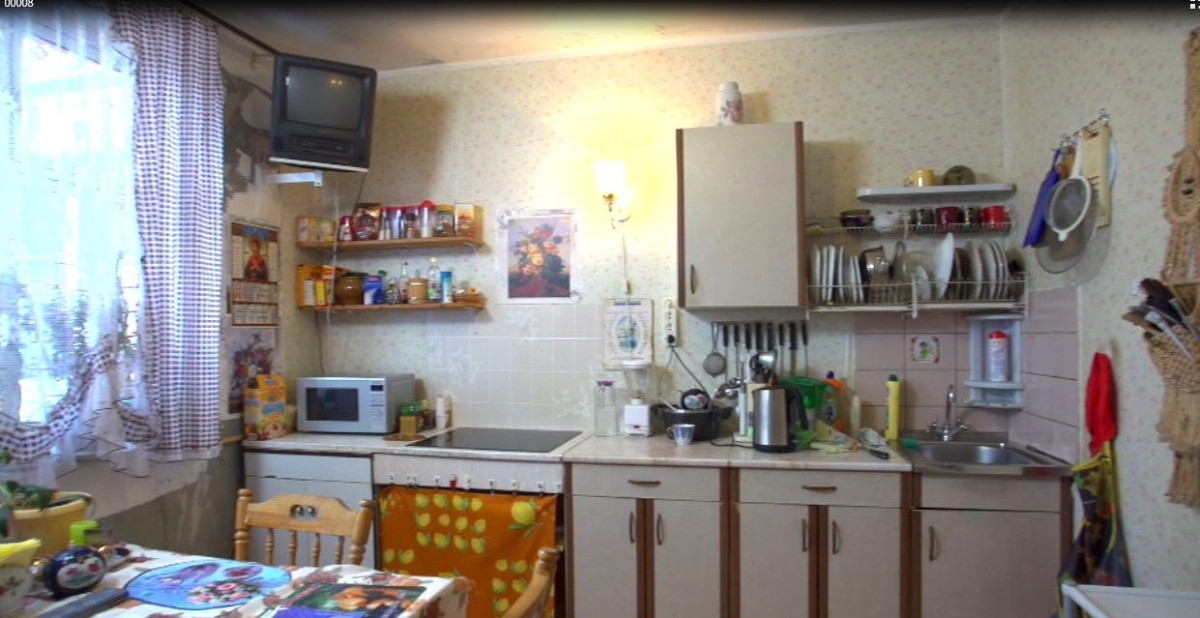 From the point of view of planning, designer Olga Povarovasuggested placing the refrigerator, sink and stove not in one line, but at an angle, forming a triangle for more convenient movement around the kitchen. Kitchen furniture with glossy white fronts was positioned along two walls, increasing the storage space. The headset apron is made of tempered glass, tinted burgundy. The color scheme is supported by the refrigerator with original lighting. Olga solved the problem of lack of lighting by increasing the light sources:

The designer paid special attention to the organizationworkplace for the hostess, extending the black stone countertop and placing above it a magnetic wall for notes. Sitting at such a table, the hostess can, without stopping from work, monitor the cooking process, turning on the white office chair. 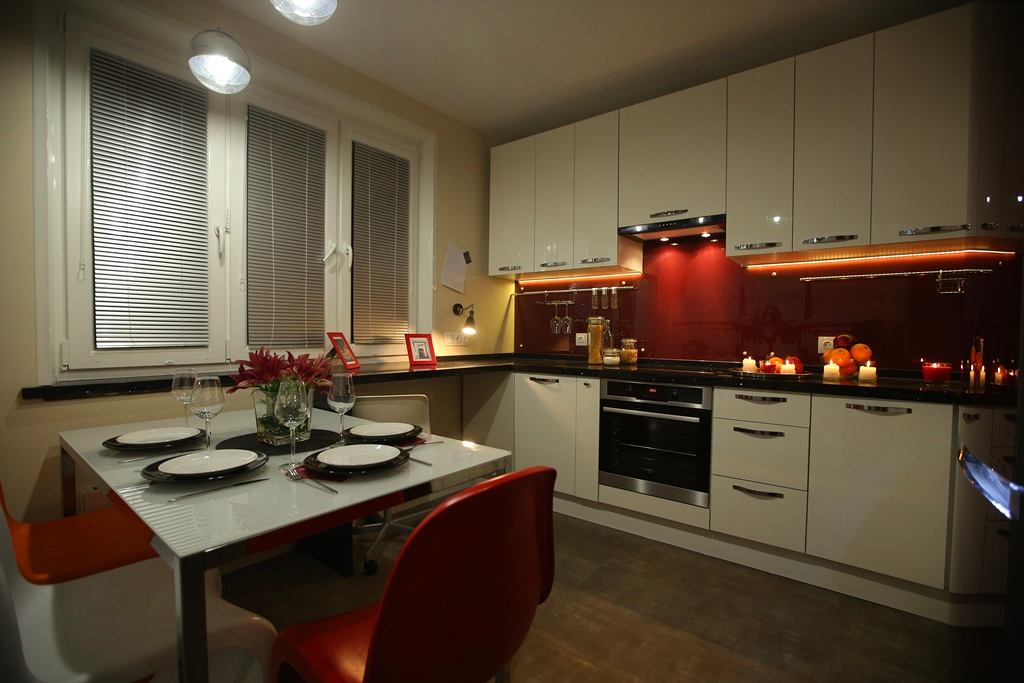 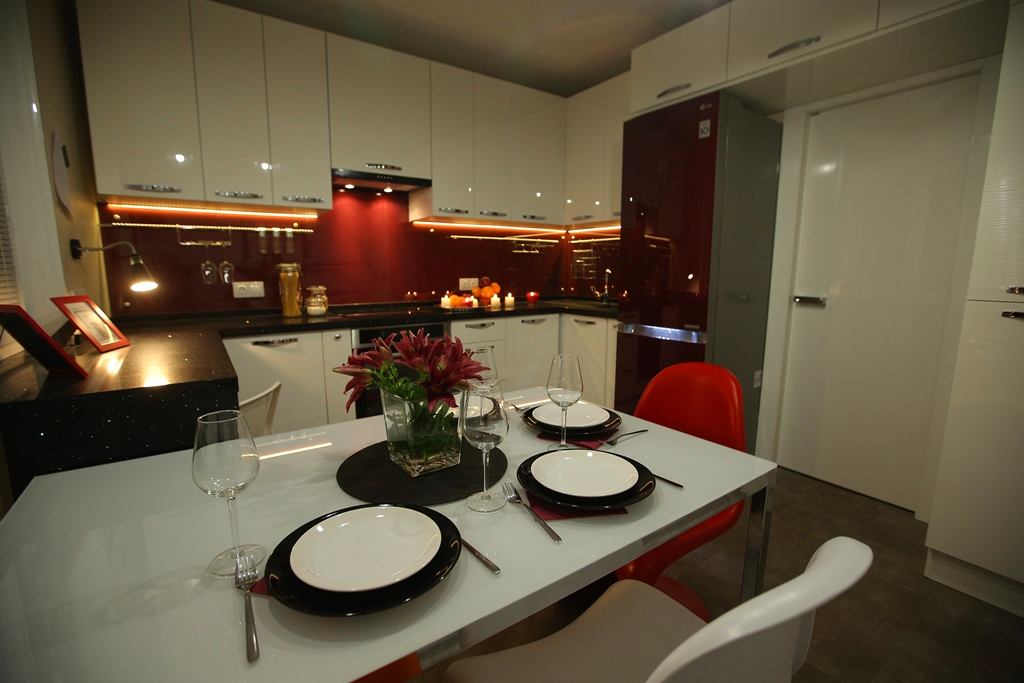 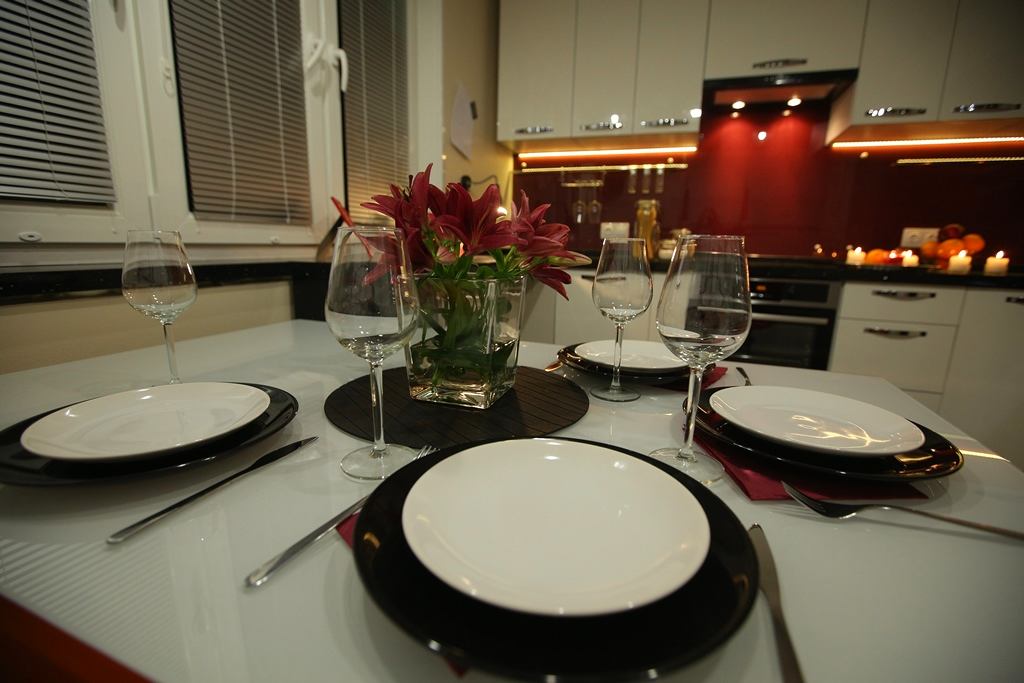 In terms of color, the kitchen is dominated bythree colors: white, black and burgundy. The idea of ​​introducing an aviation theme into the interior is supported by the details of decoration and decoration: the flowing lines of chrome-plated handles of the kitchen facades, floor tiles in the color of wet asphalt, reminiscent of runway surfaces, spherical lamps and a shiny black kitchen countertop, like the sky strewn with stars. A significant element of the kitchen was a poster with an image of an airplane, made according to a sketch by Olga Povarova. 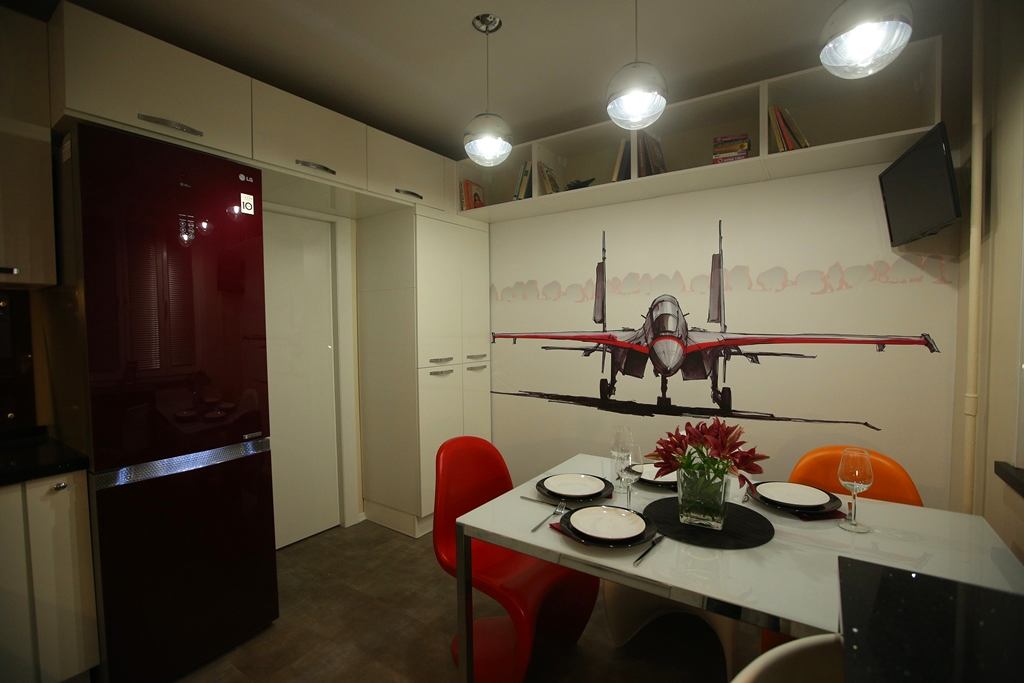 As a result, creating a kitchen interior not onlythe most ergonomic and functional, but also reminding the owners of the history of their acquaintance, the designer of the Made with taste team managed to inspire a busy business woman to devote more time to household chores without interrupting her favorite work. And finally, a few tips for kitchen renovation from designer Olga Povarova: