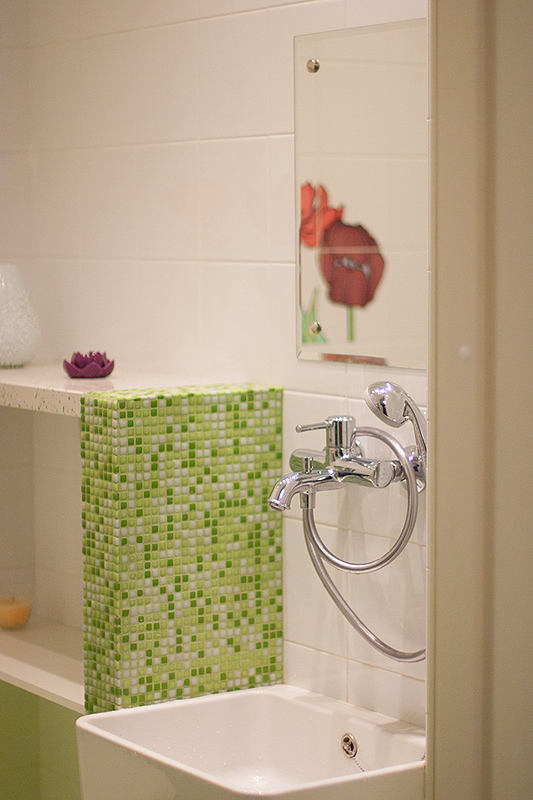 From this article, you will learn more than just howbeautifully and effectively design an open-plan apartment, but you will also see how to create an artificial bay window, decorate a house with cockerels, make an interior that will not want to change for a long time.Catherine is a lawyer, she leads an active lifestyle and travels a lot. In her new apartment, she wanted to create a comfortable home environment where you can always relax and unwind. It was with this wish that she turned to the designer Sophie Moo for help - the girls immediately found a common language and subsequently even became good friends. But whether we managed to turn an empty box into a dream apartment and what adventures accompanied the process of working on this project - now we will find out. Sophie Moo, designer Recently we have already introduced you to one of Sophie's projects, you can find more information about this designer. sofimu.com Ekaterina, owner of the apartment: - I wanted to create a space where it would be cozy and comfortable both alone and in the company of friends. The layout initially had some understanding of the key points, but at the same time there were things where the designer's help was absolutely necessary for the correct design (for example, the delimitation of the hallway and the living room, the correct distribution of zones in the kitchen-living room, the placement of plumbing in the bathroom, color schemes) ...

It was a new apartment with a marked outlinewalls, a standard inconvenient huge hall and two bathrooms. At the time of the measurement, the walls were marked in one block, and they could be changed. The designer left the living room-kitchen space as free as possible, separating the bedroom, a large bathroom for the hostess, a small guest room and a dressing room. To add dynamics to the space, as well as to place the sofa more conveniently, the bar counter was placed diagonally, it also became an extension of the kitchen and serves as a breakfast place for the hostess of the apartment. For those who want to see another great example of an open-plan apartment, we suggest reading our article about. 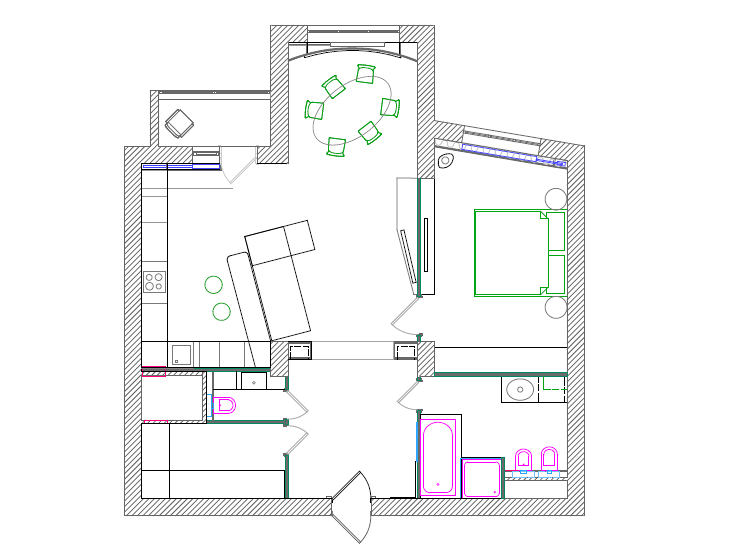 At the entrance to the apartment immediately catches the eyeSpacious living room with window. In order to soften the corners that frame this window, it was decided to make the effect of the bay window, giving the wall a soft radius of plasterboard and increasing the slopes. This is the first thing you see when you enter the room: a bay window, a window and streaming textiles.

- As soon as I entered the room, I rushed intoeyes a large window framed by angular walls. We decided to make the effect of "going out", the hall was left small but open. They painted it in a dark purple color, which, combined with the dark floor, made it a mysterious corner, from which the opening opens onto a large bright living room with a window in the center. sofimu.com 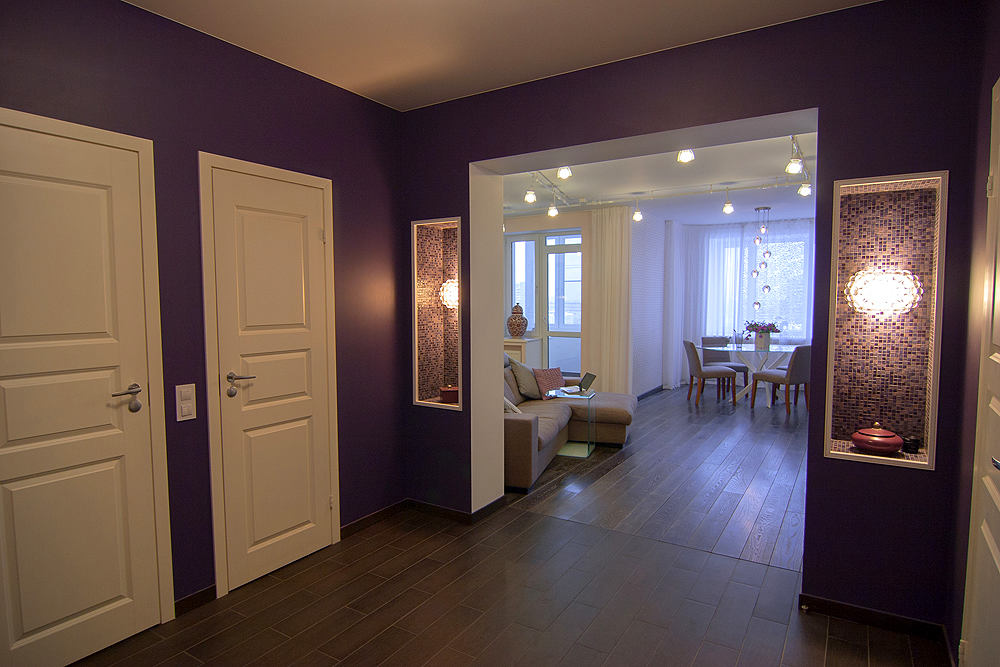 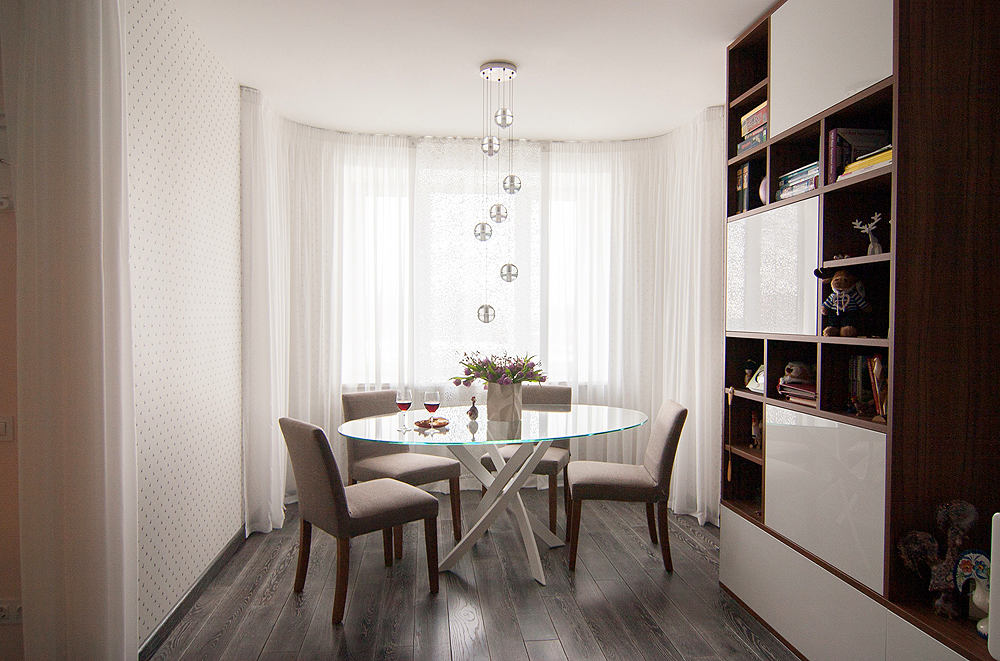 When construction began, Ekaterina and Sophienothing was found except the kitchen and the tiles. There was only a general direction that the space should be light, light, the furniture should be modern, and the bathroom should be inspiring. Everything was born in the process. Particularly noteworthy are the cockerels, which, in a completely random way, became the highlight of the entire interior and collectibles for Catherine. Sophie Moo, designer: - It was a fun adventure, when we came to the store, very roughly knowing what we liked, and found amazing things on the spot. One such example is wallpaper in the bay window area. We needed a wallpaper with a very small pattern, so as not to visually narrow this small space. We went with the idea of ​​diamonds, peas or something like that. By chance, wallpapers with cockerels were found in the catalog, just the very small size and the necessary diagonal rhythm. I joked that it was a lot of fun - having dinner with little cockerels around you, it’s kind of funny. And my wonderful client supported this crazy idea. So she became a collector of cockerels. Looking ahead, I will say that now she already has quite a lot of them. sofimu.com 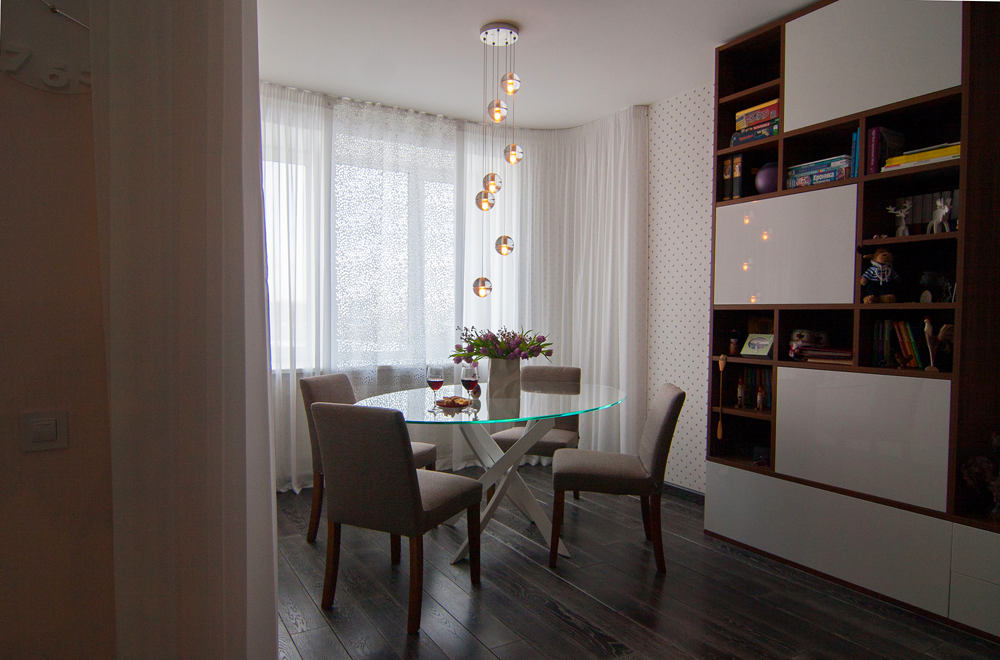 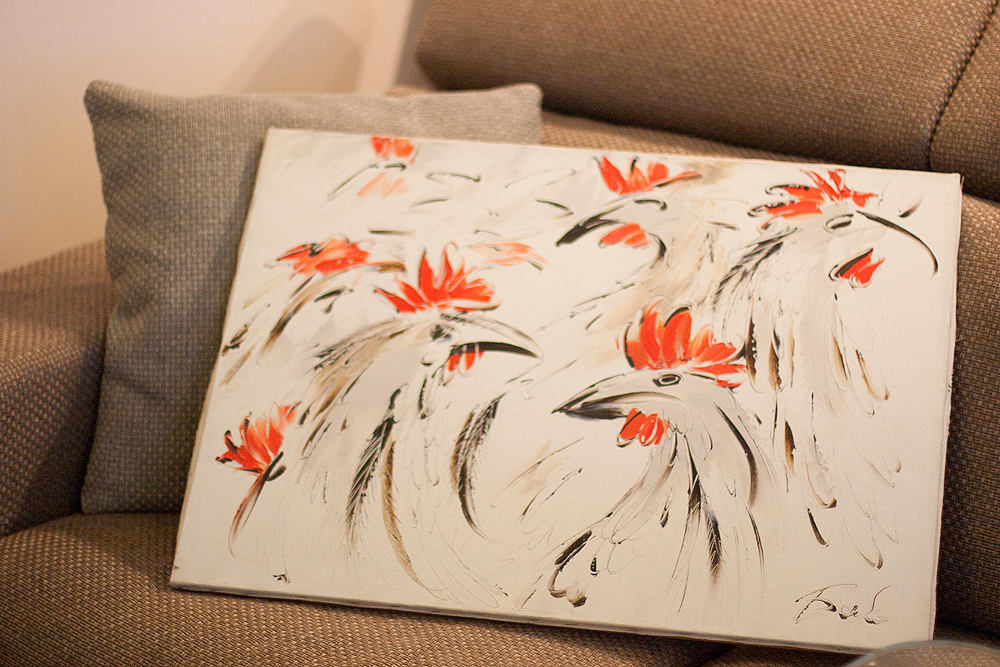 In color the girls settled on softclassic scale. The walls were painted in calm shades: the bedroom - in a deaf fern, the living room - in white with a light pink tone. They picked up a beautiful purple mosaic that echoes the hall. By the way, for the hall it took a very long time to choose the desired shade from 5-6 colors, in the end they settled on a dense twilight purple. For furniture throughout the space, they opted for white lacquer, walnut veneer and chrome fittings. But the bathroom and the guest bathroom, as planned, turned out to be inspiringly bright due to tulips from the Ceramica Bardelli collection and small mosaics. 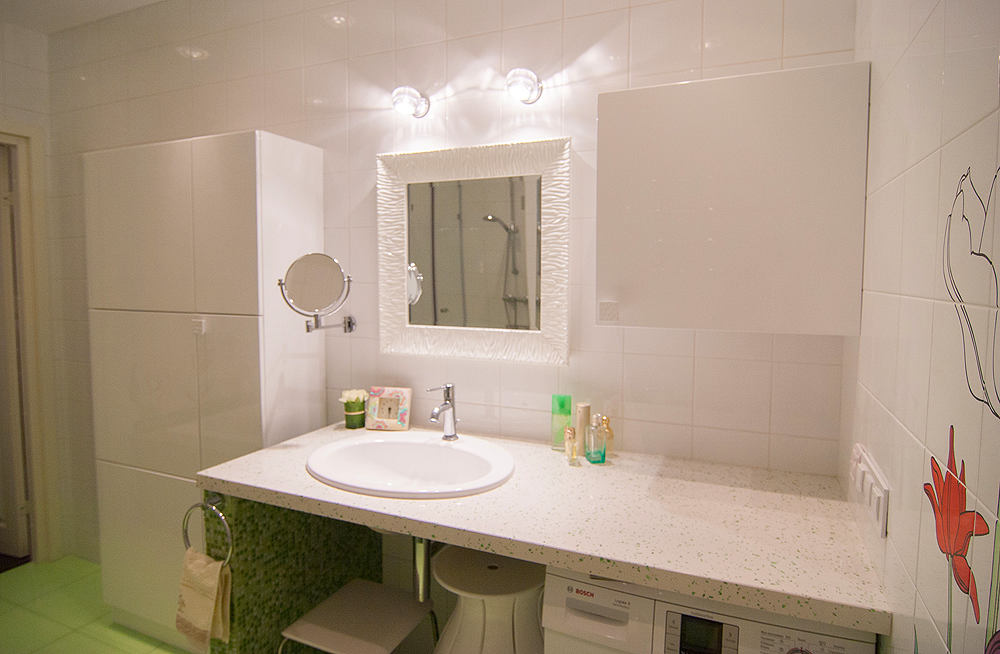 "Kruglyashki", or such important little things

The kitchen turned out to be large and multifunctional.Simple furniture in white lacquer is highlighted by a cool Elica cooker hood, while a large one made of natural granite adds genuine chic to the entire space. This beautiful stone has been carefully processed from the selected slab. Sophie Moo, designer: - Granite has an interesting texture in a large circle. These circles, or as we gently and laughing called them "rounds", spread throughout our interior - in Caboche chandeliers and sconces, spotlights in the bedroom, on textiles. sofimu.com 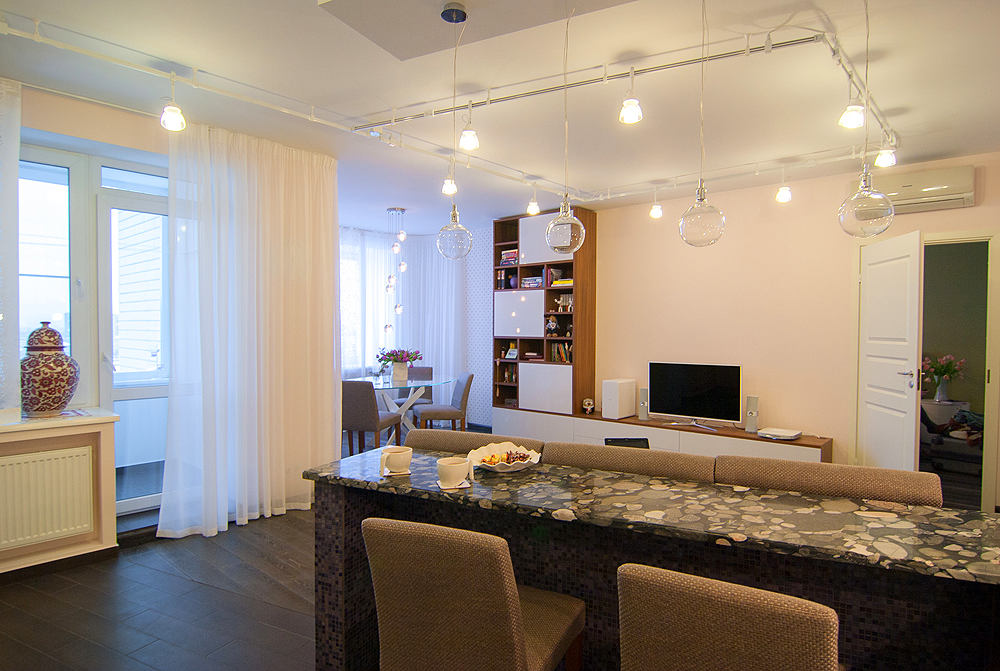 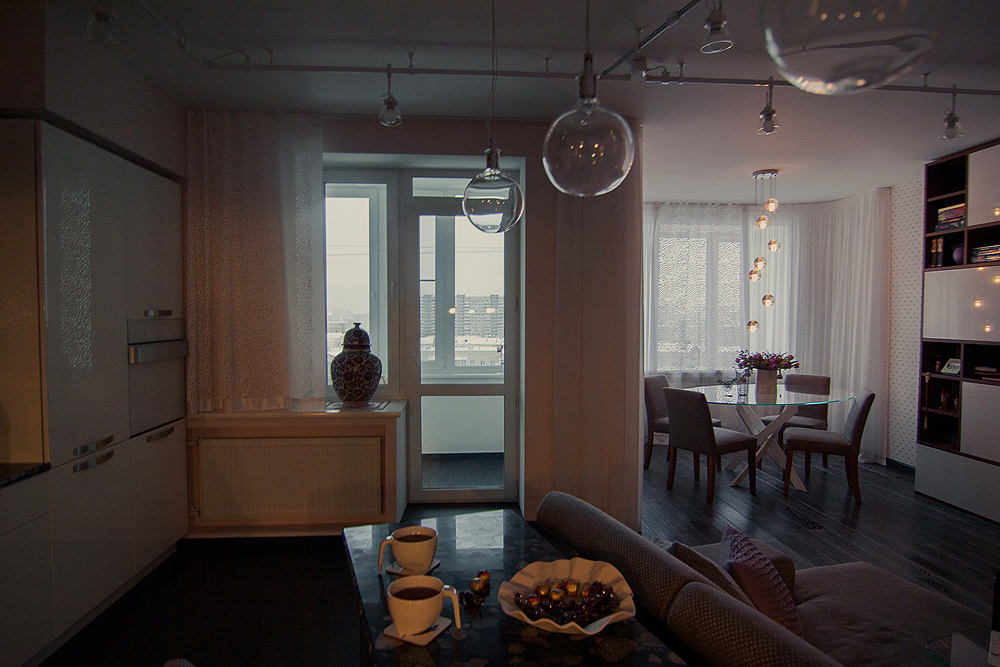 The designer paid a lot of attention to detail,because she believes that this is the most important thing in the interior. For the bedroom, we chose the idea of ​​comfort, a large bed and a voluminous wardrobe with mirrored doors, which expanded the space and successfully reflects the window in the daytime, filling the room with light. Sophie Moo, designer: - Initially, we thought that the sun from the window would enter the bedroom through perforated textiles. They searched all over Moscow and, having found the necessary Nobilis Boollis fabric, ordered it from the supplier. It turned out that it was on us that the production of fabric ended, so they sent us the rest. It was very difficult to tailor them as needed, but everyone met us halfway. In this matter, we are very grateful to the employees of the Alliance High Textile firm for the highest level of professionalism. And our humble seamstress. It is thanks to these people that we have everything worked out with our fabrics in the apartment - the living room is enveloped by a flowing white veil, the window in the bedroom is tightly curtained with a matting. It turned out the very holes that let in light, a chic unique bedspread and pillows. sofimu.com 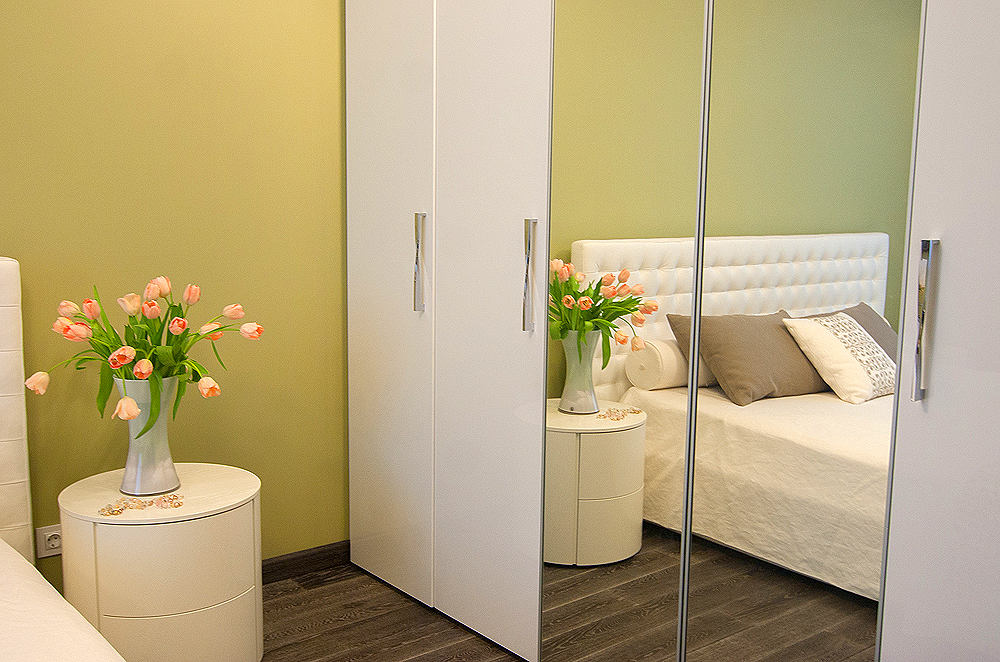 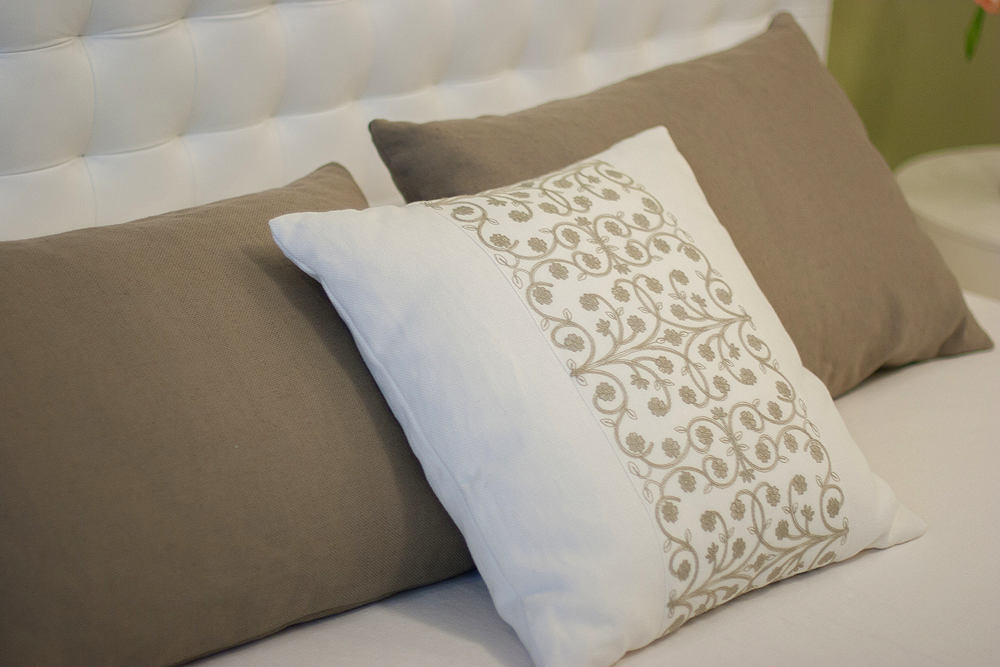 Lighting on all of her projects Sophie tries tomake it multifunctional, and the scenarios as interesting as possible. This apartment is no exception. Here you can turn on a separate warm lamp light above the bar - air glass balls. The entire living room is illuminated by a line of white track lights designed for fill light. A separate pride of the creators of the project in this apartment is the Bocci chandelier above the dining area in the bay window. The designer brought it with her own hand from Prague from the exposition of one light salon, while looking for it for a very long time in the presence of the required configuration. The chandelier is very heavy, since its balls are made of solid glass with a light element inside, but this did not prevent it from being moved to Russia. For the bedroom, the option of full and partial lighting was chosen. Bathrooms are very bright in terms of lighting, and the bathroom also has mirror lighting. Sophie Moo, designer: - We were looking for a chandelier in the living room for a long time and, having found it on the Web, did not know where to see it live. As a result, the client saw it in Norway, I - in Holland, and bought it in Prague. It was there that she was available in the right configuration. The regional representative of this Canadian company in Amsterdam, when I came to him for the chandelier, said that it was not there at the moment, after negotiations about sending it to Russia, he asked where we were going next. Learning that our then trip lies through Prague, this ordinary manager of an ordinary Amsterdam salon called Prague and put a chandelier for us there in reserve. It was amazing, and I was even more surprised when I came to Prague for her and found the owners of the salon there - Ukrainian architects. They were also surprised that a stranger from an unfamiliar salon did this for us. We are very grateful to these people for their help and such a level of professionalism. sofimu.com 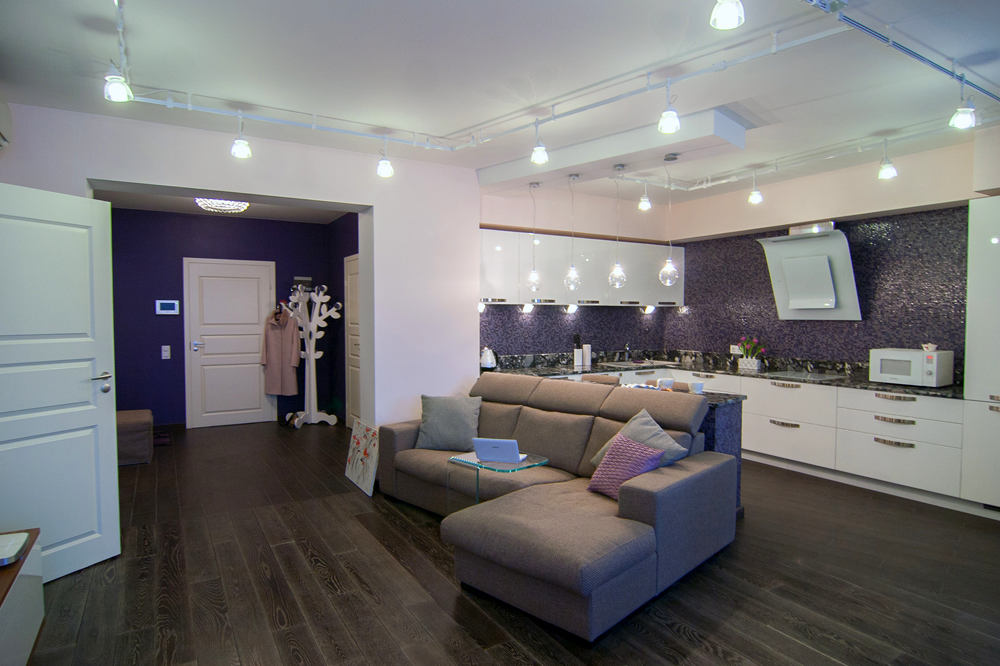 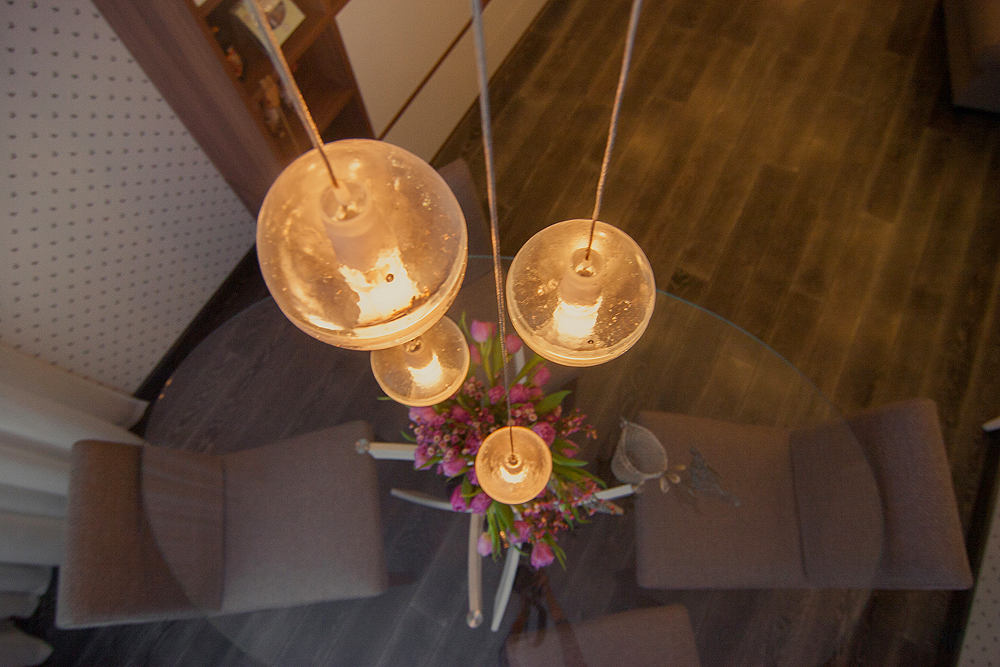 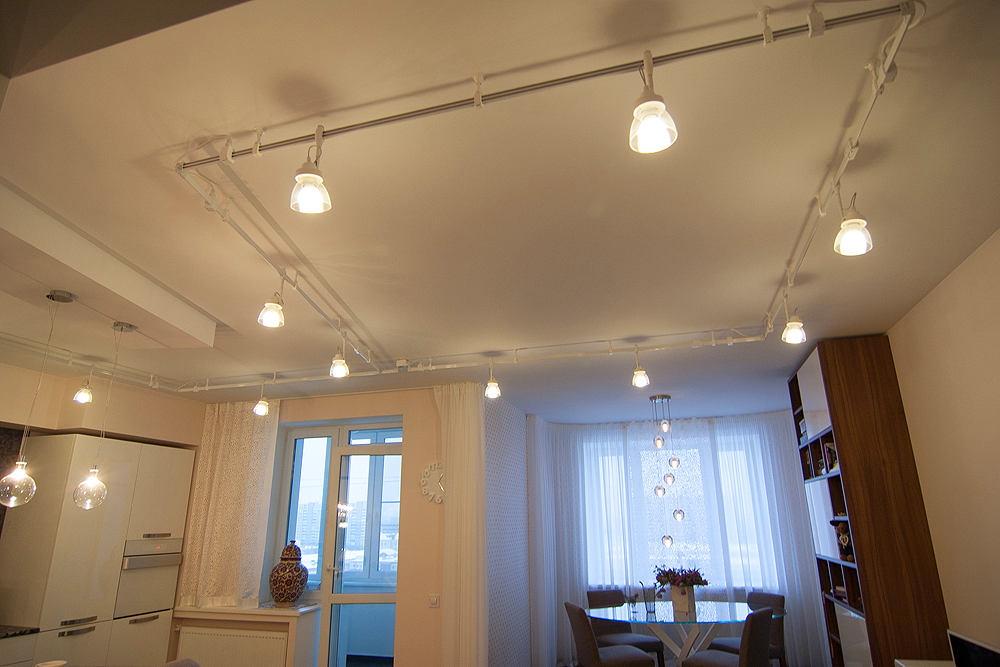 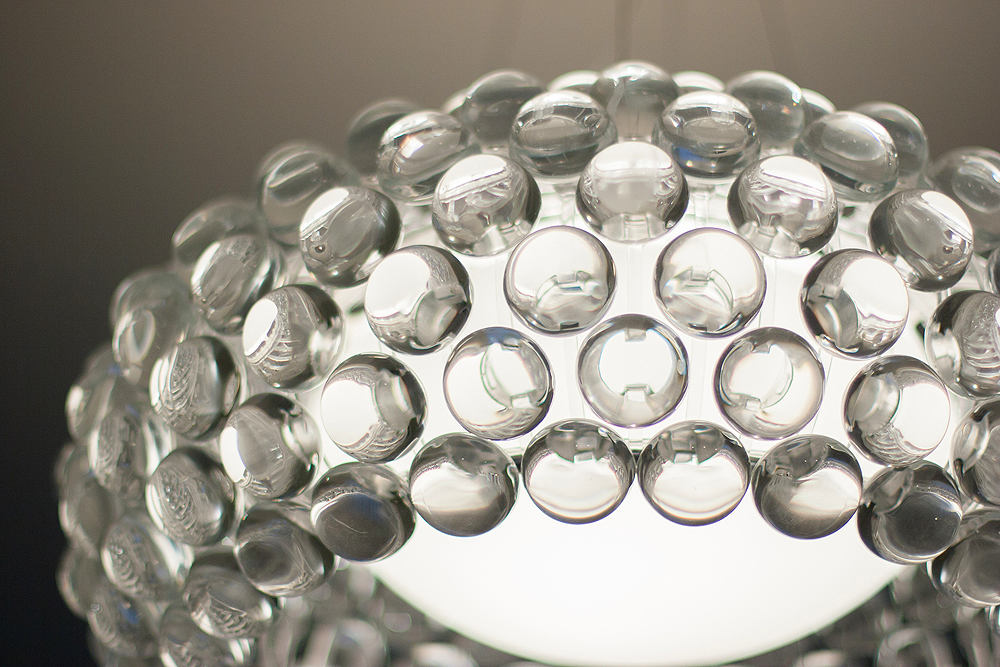 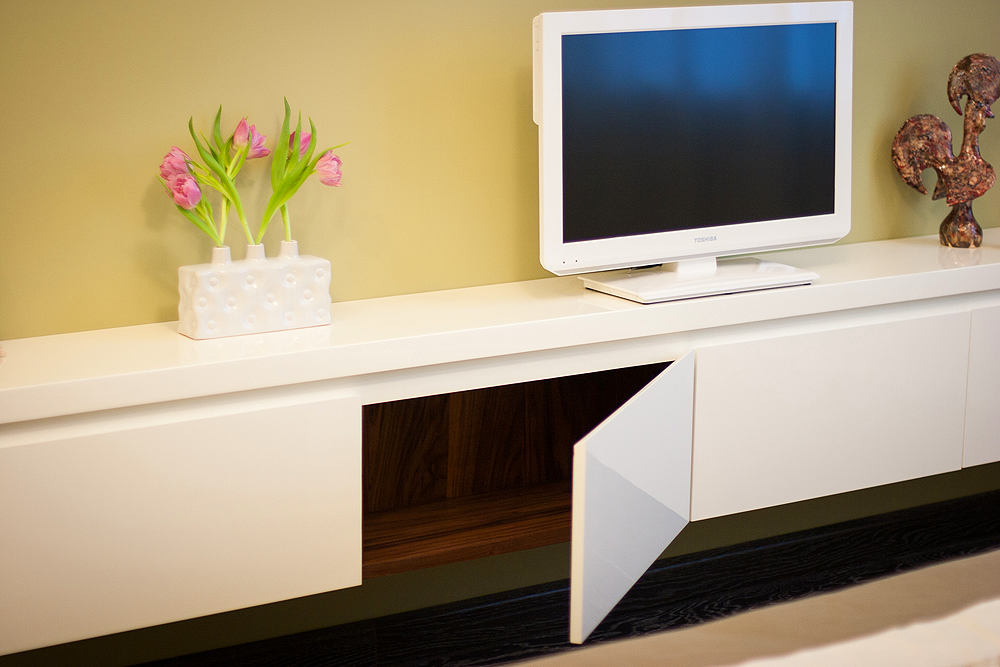 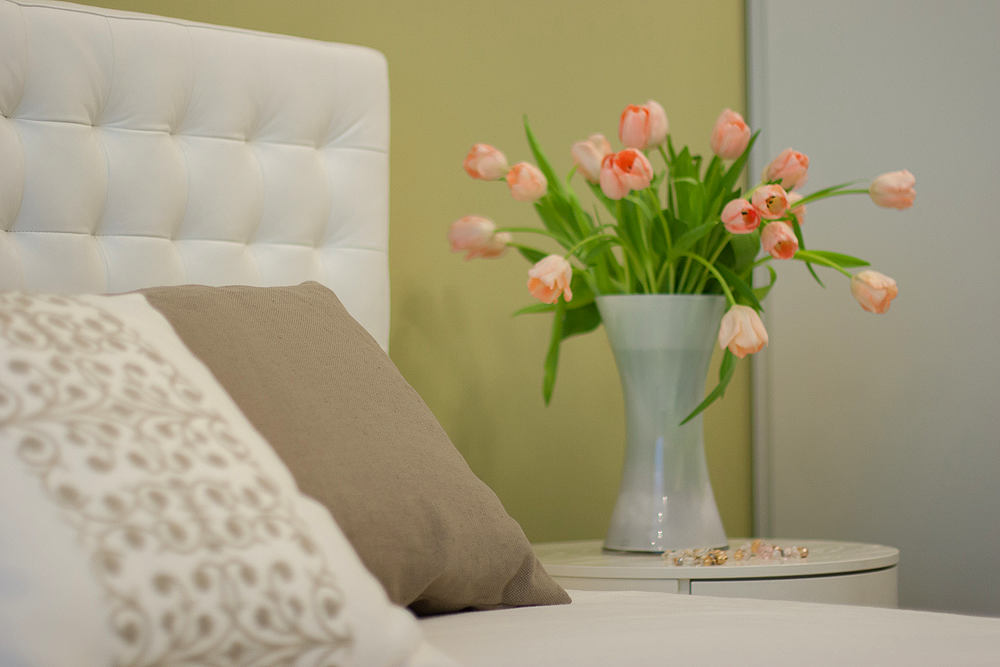 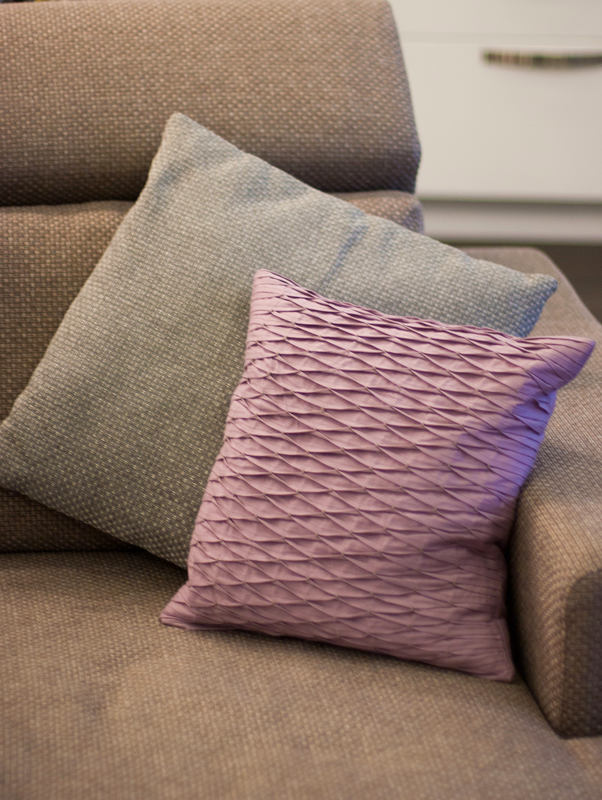 Ekaterina, owner of the apartment:- The designer helped to combine existing ideas into a single space, beautifully and comfortably to bring to life what you wanted. Moreover, it turned out an apartment just for life - where everything is convenient, practical, close at hand, but at the same time in the same style and with its own flavor. It seems to me that it is a good sign - in more than two years that have passed since the completion of work on the interior (purchase of the last furniture elements and hanging curtains), there has not been the slightest desire to change / move / remove anything. Nothing gets in the way, does not annoy and does not require modifications. This means that the result is an interior that suits the owner as much as possible. sofimu.com