Can a loft look unusual?How to express your craving for originality and freedom in your personal space? Can street art invade a home? Let's try to consider these issues with a real example from Moscow. This apartment is located in the former building of a grocery store. The total area of ​​the space is 350 square meters, of which 180 are allocated for the living area, dining room and kitchen. A young man lives here. The absence of partitions in the room has become a real expanse for the designer's imagination. Skillful zoning, the play of textures, graffiti, the combination of luxury with simplicity, accent details - all this is not a boring project by designer Natalia Bespalova. This is eclecticism (mixing of styles) with elements of the East and masculine brutality. Let's see what happened.

Graffiti: street art inside the house

Home graffiti is rare.on a brick wall, this option takes place. A bright positive picture in this interior has become an accent unifying zone of the entire space. Modular sofas are like a continuation of the wall and act as juicy splashes in the interior. Visually, this technique makes the room even more spacious. In addition, it turned out to make the space unusual, to add zest to it. Pay attention to how well the lighting is chosen, which enlivens the picture, makes it brighter and more dynamic. 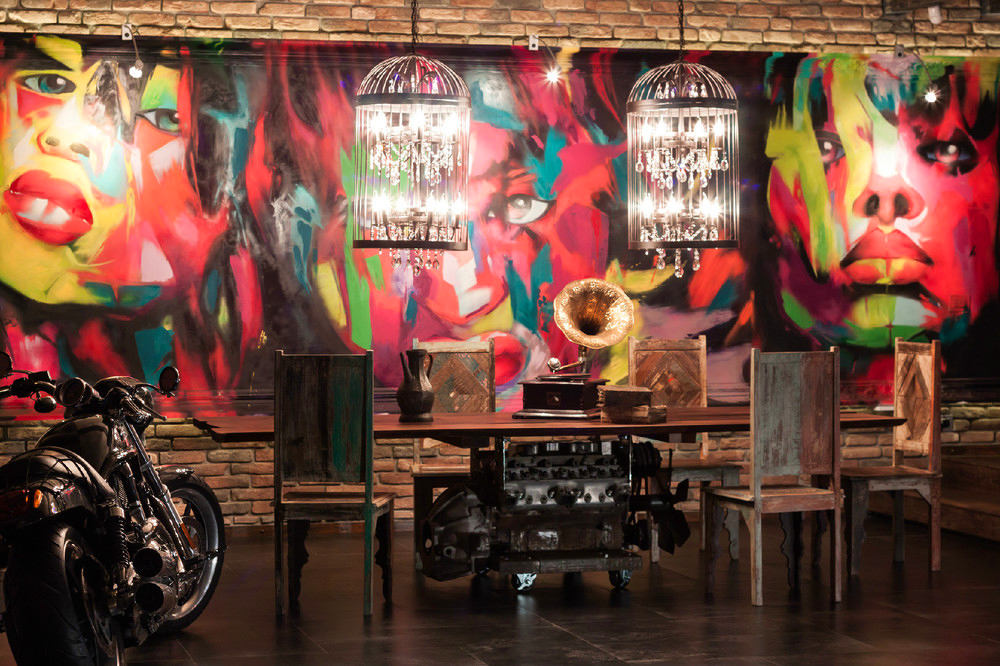 Loft style assumes the design of space withoutdivision into separate rooms. creates the illusion of separate rooms. The kitchen and dining area in the interior is separated from the living room by columns and a multi-level floor (also called a design podium). In this case, it has a decorative function. Visually, such a zone dominates and draws attention to itself. Also, the dividing element between them was the lower lighting in front of the steps of the podium. But that's not all. Each of these halves is also divided into sections. For example, the living room has a TV area and a circular seating area that can accommodate many modular sofas in different colors and textures. The decorative podium has become an excellent zoning element. It also turned out to adjust the height of the space and harmoniously fit a part of a large pipe in a round recreation area, which was slightly deepened. Our opinion: - In the loft style, some expressive element must necessarily dominate. In this case, it is an exhaust pipe above the table. A decorative podium was also used in the design of a private area - a bedroom. An unusual wooden ceiling has become an accent detail in it. 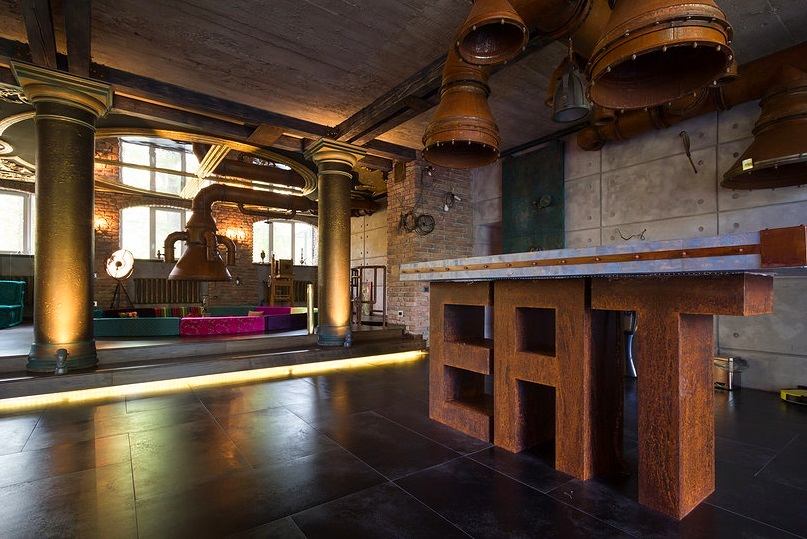 In the living area, attention is also drawn to itselfluxurious mirrored ceiling, divided into several fragments. So the space is visually clearly delineated into different areas. Thanks to the mirrors, the windows visually become more spacious, and the room brighter, due to the reflection of multi-colored sofas in them. Gold decorative elements of the mirrored ceiling are consonant with other items in the interior. The style of gold and mirrors in the bathroom is supported. It should be noted that the interior looks interestingalso thanks to the unusual interior items. A Harley Davidson motorcycle was placed between the dining room and the kitchen as a connecting piece. Quite unexpected for a living space. This brings a masculine mood to the interior, emphasizes the freedom-loving character of the loft owner, his passion for speed and movement. Noteworthy is a gramophone with a gold bell. The retro atmosphere is felt in all corners of the space, and even in the bathroom. Pay attention to the space under the sink. An old sewing machine is installed here - another original element of this interior. The dining table made of rough oak planks also makes an impression; it marks the dining area. After the repair, the tabletop was installed on a car engine (with wheels for ease of movement). In this loft, there are large pipes with a coating of rust everywhere. Despite this effect, the industrial atmosphere as a whole looks very warm and cozy, and the spotlights installed in the corridor create a mysterious atmosphere and set the mood right from the door. 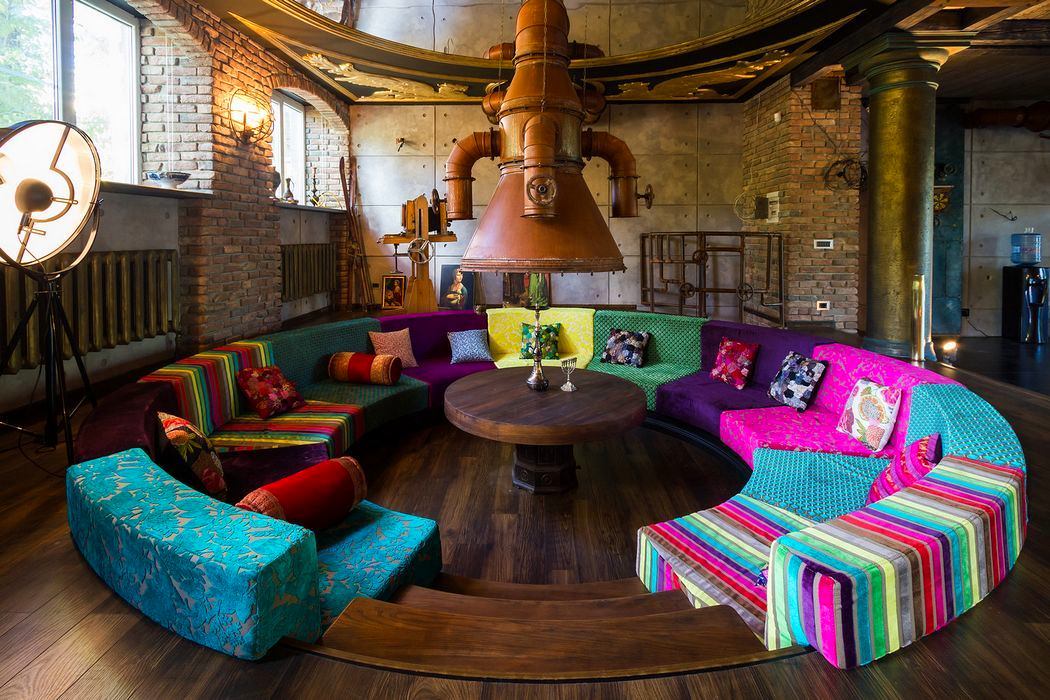 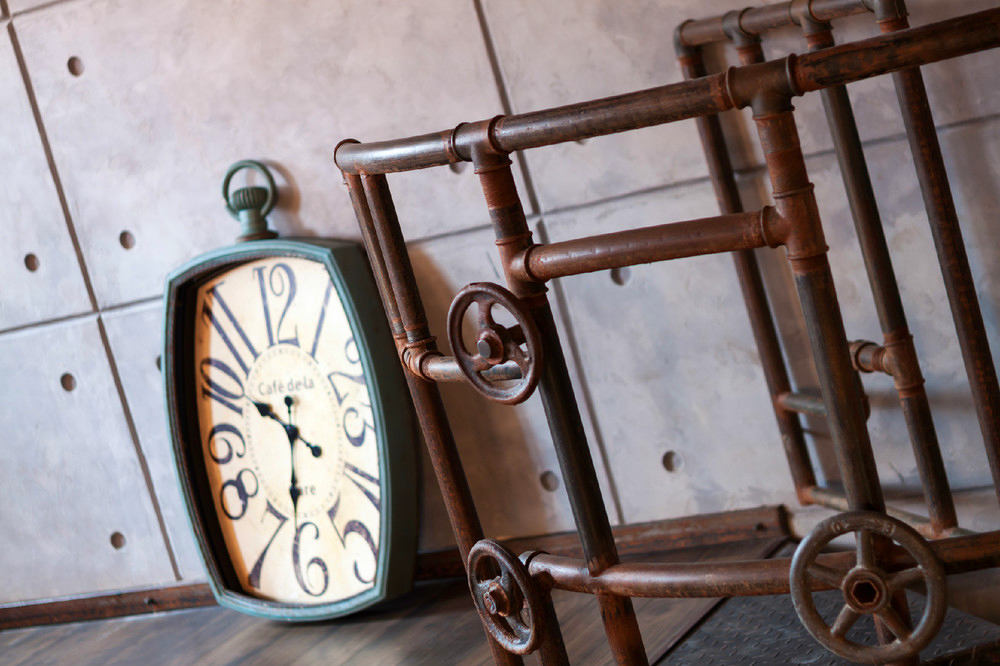