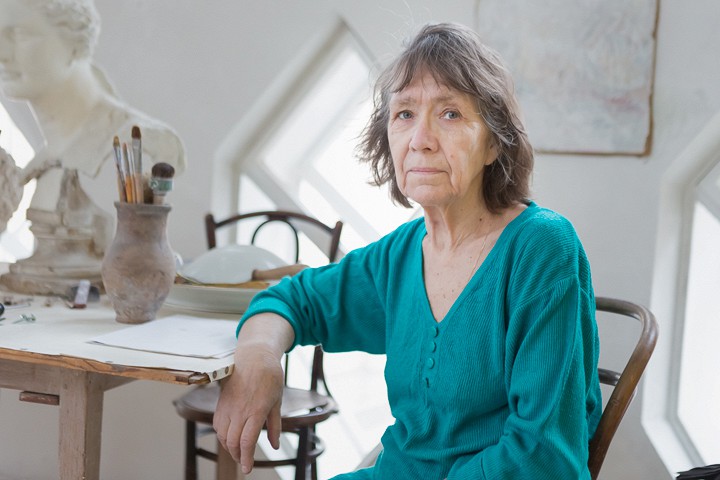 Around the house of architect Melnikov do not ceasepassion, about it they shoot stories for television and write newspapers. From our article you will learn about the most famous architect and see the interiors of this most avant-garde house in Moscow. There are less and less remarkable buildings in Russia, from the point of view of history and architecture. What does not destroy time, people destroy. The more valuable in all respects are the houses that are the embodiment of the talent of those who designed, built and preserved them. Probably, in some of the premises preserved by the descendants, the souls of the departed ancestors still live. And the souls of the houses themselves. 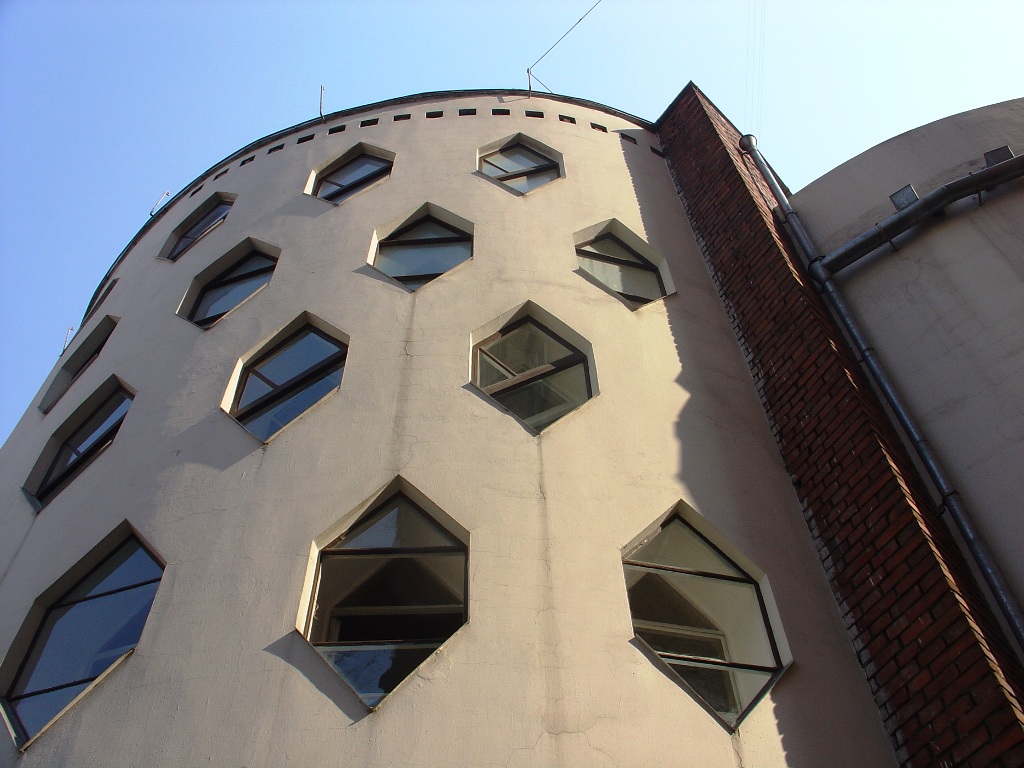 Innovator of the world level

Konstantin Melnikov, architect, artist andthe leader of avant-garde architecture in the capital's architecture, was born back in 1890. As a teenager, he studied in the icon-painting workshop, but neither painting nor icon painting became his life's work. However, his creative impulses found application after a chance acquaintance with the famous engineer and scientist Vladimir Mikhailovich Chaplin. He hired a talented young man and, seeing his drawings, insisted on getting him a serious education. At the age of 15, Melnikov entered the painting school, having brilliantly passed all the exams, choosing the department of architecture and sculpture. For 12 long years he received knowledge and graduated from 2 departments - architecture and painting. 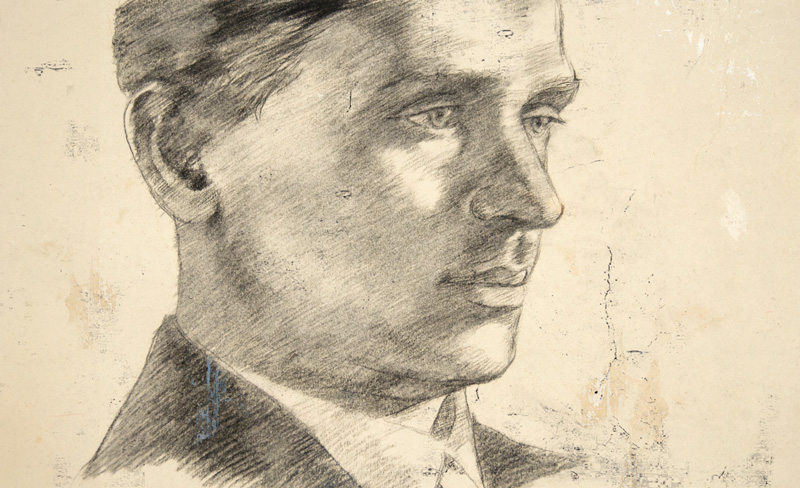 In 1925, Paris hosted the famousinternational exhibition. The pavilion, representing our country, became the realization of Melnikov's project. This was his first big job, immediately attracting attention to him. 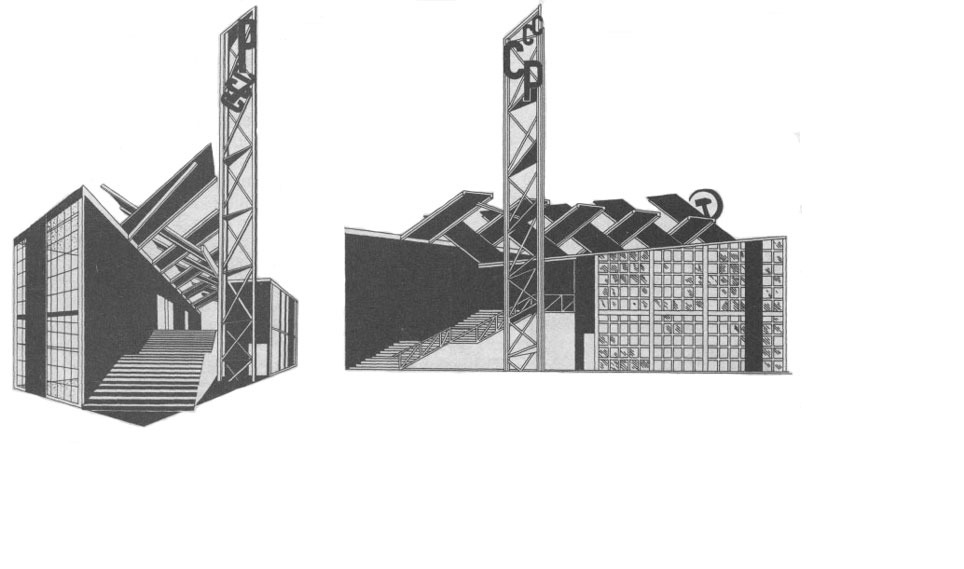 Then Melnikov paid tribute to thearchitectural fashion neoclassicism, having defended a diploma in this direction. Later, projects for decorating the facades of the buildings of the famous AMO plant appeared in this style, the search for creative ideas and ways began, the rejection of the dominance of eclecticism, the formation of their own innovative proposals and attempts to implement them. Other colleagues considered many of Melnikov's designs provocative, in particular the project of the pavilion building called "Makhorka", the Palace of Labor, the complex of residential buildings "Saw", which in style and geometry were discordant with the designs of other architects. 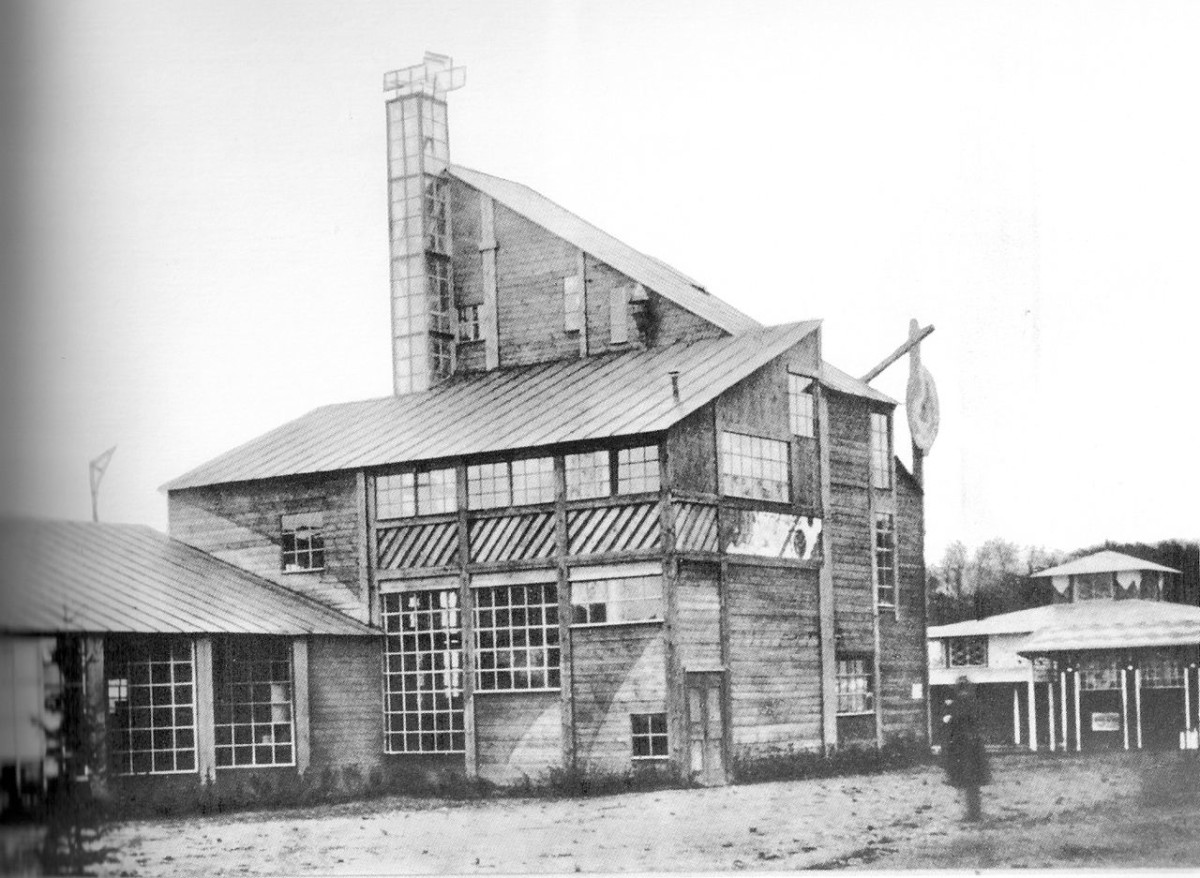 Many, on the contrary, admired the fresh trend inarchitecture. But, in any case, almost indifferent to these works. Even now, few can take a detached view of the unusual motives of Melnikovsky developments, among which we should mention the project of the five-story building of the Moscow edition of the Leningradskaya Pravda put forward for the contest, where the upper floors could rotate about the same vertical axis; crystal form of the sarcophagus for Lenin's Mausoleum and much more.

The creations of Melnikov were also appreciated abroad.His project for car parks over bridges over the Seine in Paris was one of the world's first vertical zoning options for urban environments. The architect proposed to implement another parking project in the form of a cube high-rise building with ramps inside. In total, Konstantin Melnikov owns 15 completed projects, more than 70 remained in the drawings. Historical background Konstantin Stepanovich Melnikov (1890-1974) - Soviet architect, Honored Architect of the RSFSR. He developed new types of public buildings and building structures, was one of the first to put forward the idea of ​​transforming the interior space. Melnikov's works (such as the wooden pavilion "Makhorka" at the First All-Russian Agriculture and Handicraft Exhibition, the I.V. sometimes a paradoxical constructive solution.

A man of such an unusual spatialthinking and for himself could only build a house amazing in form and layout. Construction work on Krivoarbatskiy lane began in 1927 and ended 2 years later. The shape of the structure is 2 cylinders of different heights, which enter each other by a third of the radius. The terrace crowns the roof of a lower cylinder, while from the “front” side, the unusual house looks like a glazed screen made of many honeycomb-shaped windows (now there are 130 of them, but up to 300 window cells were originally envisaged). This design is not only extremely durable, but also floods with light almost all of the interior space. 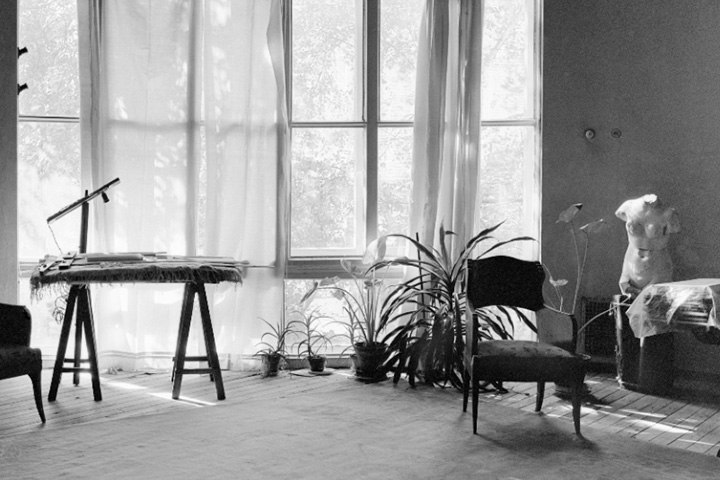 The total area of ​​the house is relatively small - about250 sq. M. 11 rooms Melnikov placed on the ground floor. Among them there are 2 children's rooms, the room of his wife Anna Gavrilovna, a dining room, a kitchen, a bathroom and a restroom. From the corridor, you can go up the spiral staircase (you need to move counter-clockwise). 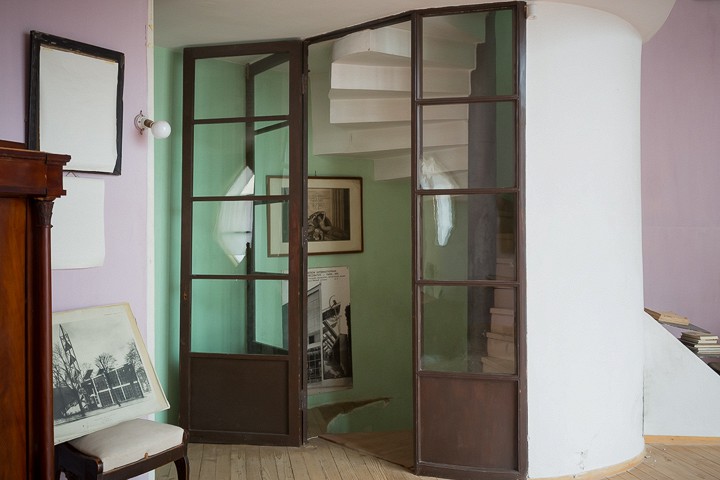 The living room impresses with its size and space. The light comes through a huge window-screen. The bedroom ceilings are low, and this is not just a whim of the architect. Melnikov put forward the theory of "right sleep" and even developed the concept of a city in which, according to him, it would be possible to "treat the people who need it before the complete change of character". In the bedroom, the walls are painted with golden paint, and all corners are rounded. 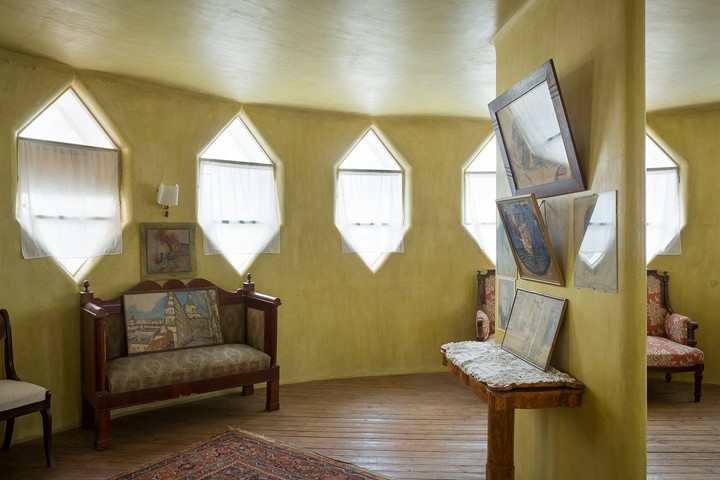 In the living room was preserved a small "Suprematist" oven, which was once laid out by the owner of the house. 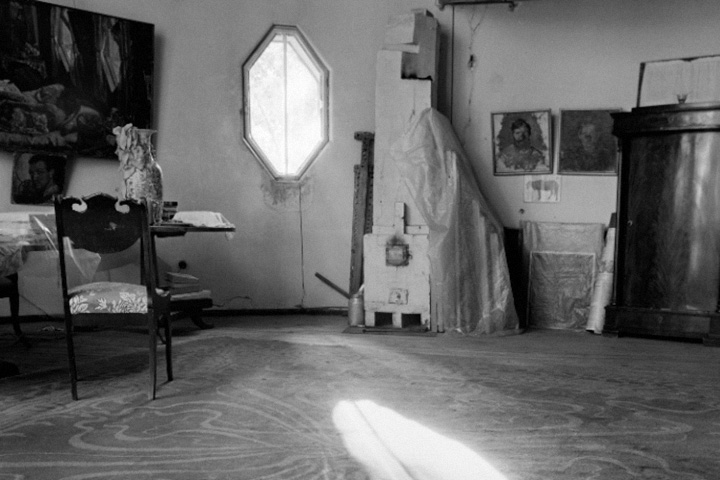 Konstantin Stepanovich's workshop is located onthird floor. It has as many as 38 hexagonal windows, so that the shadow from the hand when working at the table does not fall on the drawing. From here you can also exit through the balcony to the terrace. By the way, the color scheme of different rooms was thought out from the beginning, although it is possible to talk about individual rooms only with a certain degree of convention: many of them are separated not by walls, but only by the arrangement of furniture. At the same time, the bedrooms are made in gold colors, the living room is pink, the workshops are white, and the stairs are painted in cheerful green. 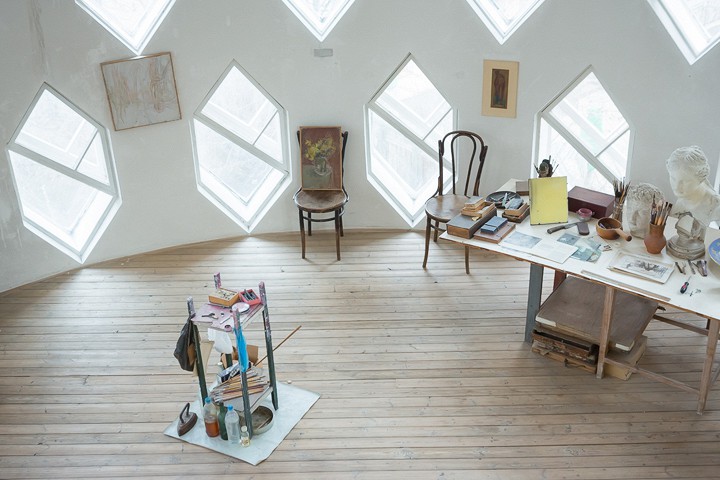 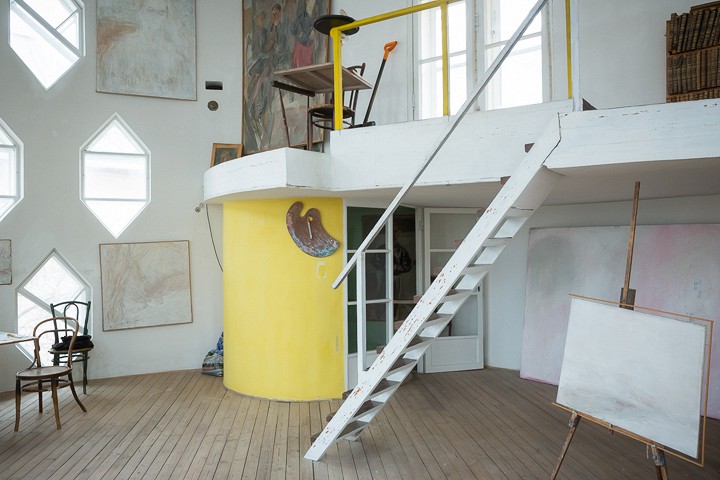 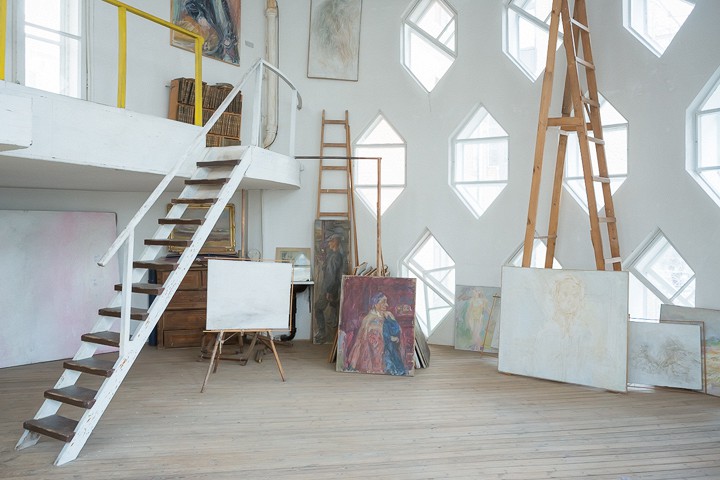 Konstantin Melnikov died in 1974, andproperty rights passed to his son Viktor, a talented artist and successor of his father's traditions. After the death of Viktor Konstantinovich in 2006, one of his daughters, Ekaterina Melnikova-Karinskaya, became the legal successor and custodian of the legacy of her famous ancestors.

This winter, the Ministry of Culture made a decisionto create a museum of the architect and his son, and soon the Melnikovs' House received the status of a federal monument. Some legal differences, which have not yet been resolved, prevent these good intentions from being realized in a short timeframe. In our age of Constructivism, Rationalism, Functionalism and ARCHITECTURE there is no more ... As for me, I knew something else, and this is different - not only constructivism. I considered any dogma in my work to be an enemy, but the Constructivists in general did not achieve the sharpness of constructive possibilities that I had anticipated by 100 years.