The resorts of Crimea are now for many a topical holiday destination. We want to show you an elite villa on the beach, its design is admired

The villa is located one kilometer from the sea, onPicturesque hills in the cottage village "Villa of roses" in Gurzuf. Cottages and detached villas are made in one style - Mediterranean. The territory of the village is an old green park, where each tree is under protection, so it was impossible to damage plantations during construction.

The customer applied to the SL-project design studio withRequest to develop a design of the facade and interior. Alexei Nikolashin, architect. Graduated from the Moscow Institute of Architecture. Worked in the Mosproject. In 2004 he created his own workshop - SL project. "The result of our work, regardless of whether it is a cottage or a private apartment, is a thoughtful, modern, functional product. The principle of our work is the architectural approach to the formation of space. This is what distinguishes our work from the works of most design studios. " Ab-sl.ru

The work was complicated by the fact that the terrainRather complex: hilly, is on a descent to the sea. In addition, on the site allocated for the construction of the villa, right on the site, where the project must be built a house, there is a large oak tree, which could not be touched.

On the one hand - this is a serious hindrance, and on the other - a great opportunity to create a natural shadow on the terrace by the pool. 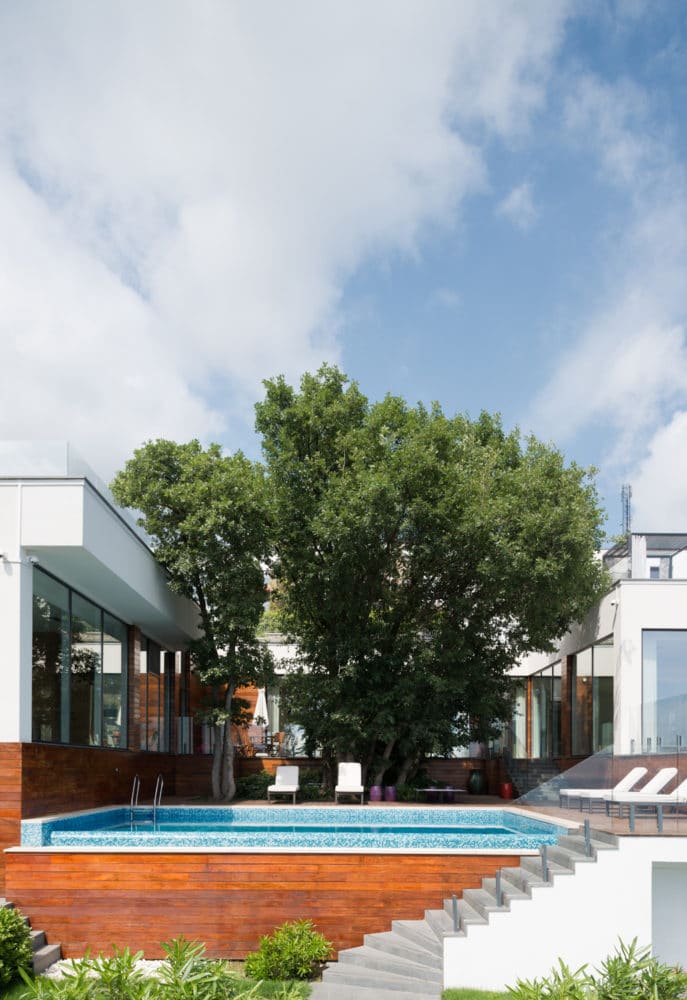 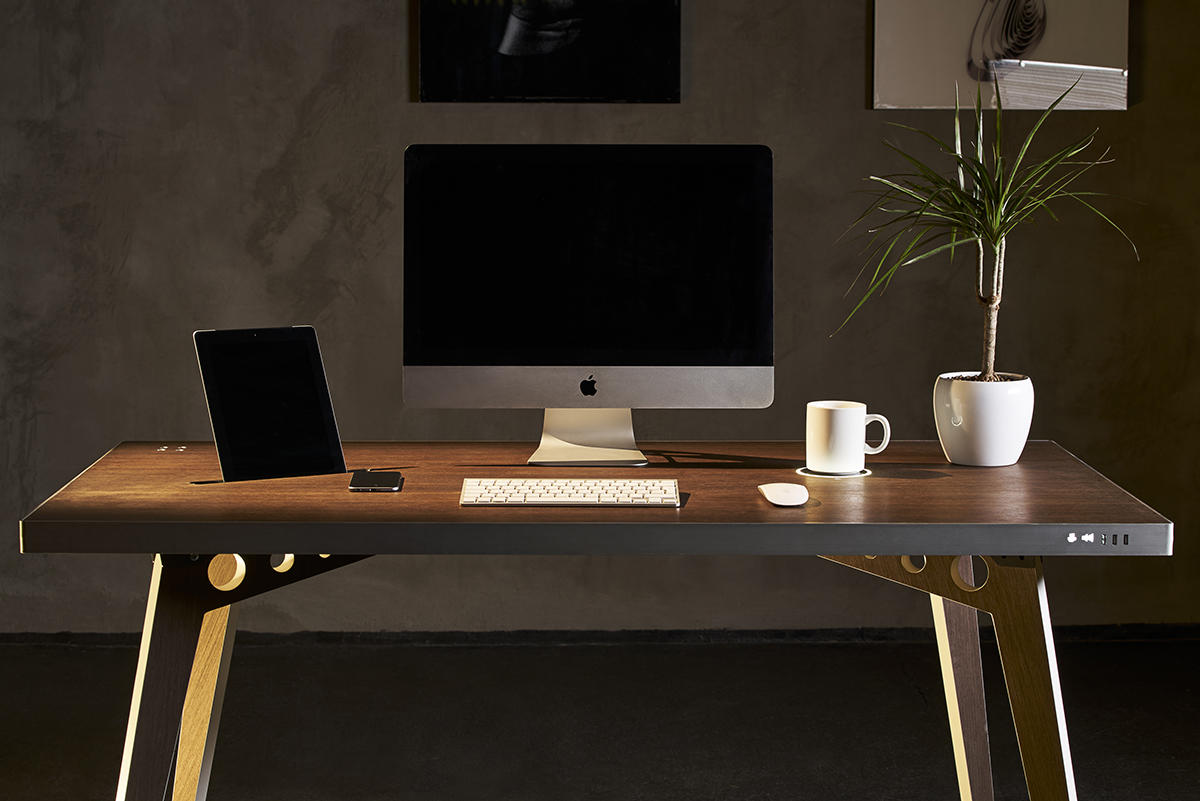 Wood used for sheathingThe facade of the house is the kumaru. It looks great in combination with gray tiles and white plaster. The choice was made in her favor also because this wood is resistant to aggressive environments - salty sea air and the scorching sun of the Crimea. 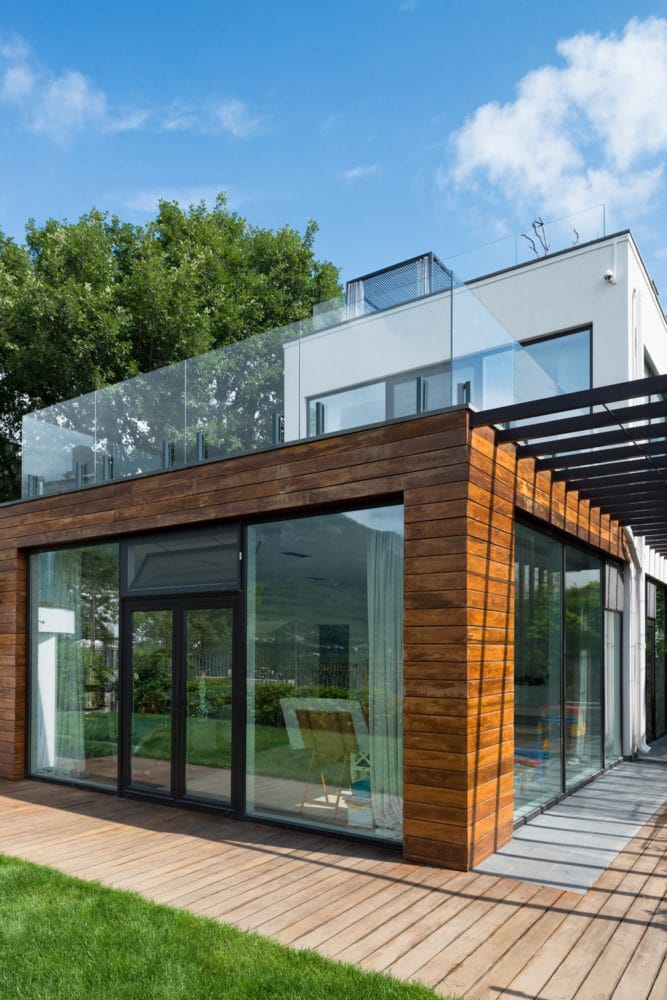 The villa consists of four levels. Due to the peculiarities of the terrain and the access road, the garage is located on the upper level. From it goes down to the observation deck, which is the roof of the lower tier. The roof is covered with pebbles, so the observation deck merges with the general landscape.

Below is the main level, which houses a living room with a fireplace, a kitchen, a master bedroom and a TV lounge.

The interior of the villa is dominated by white colors, inWhich are interwoven with wood motifs and various bright accents in the form of accessories. The kitchen is zoned with a podium, and the flooring is made of the same wood that is used on the street - kumaru. 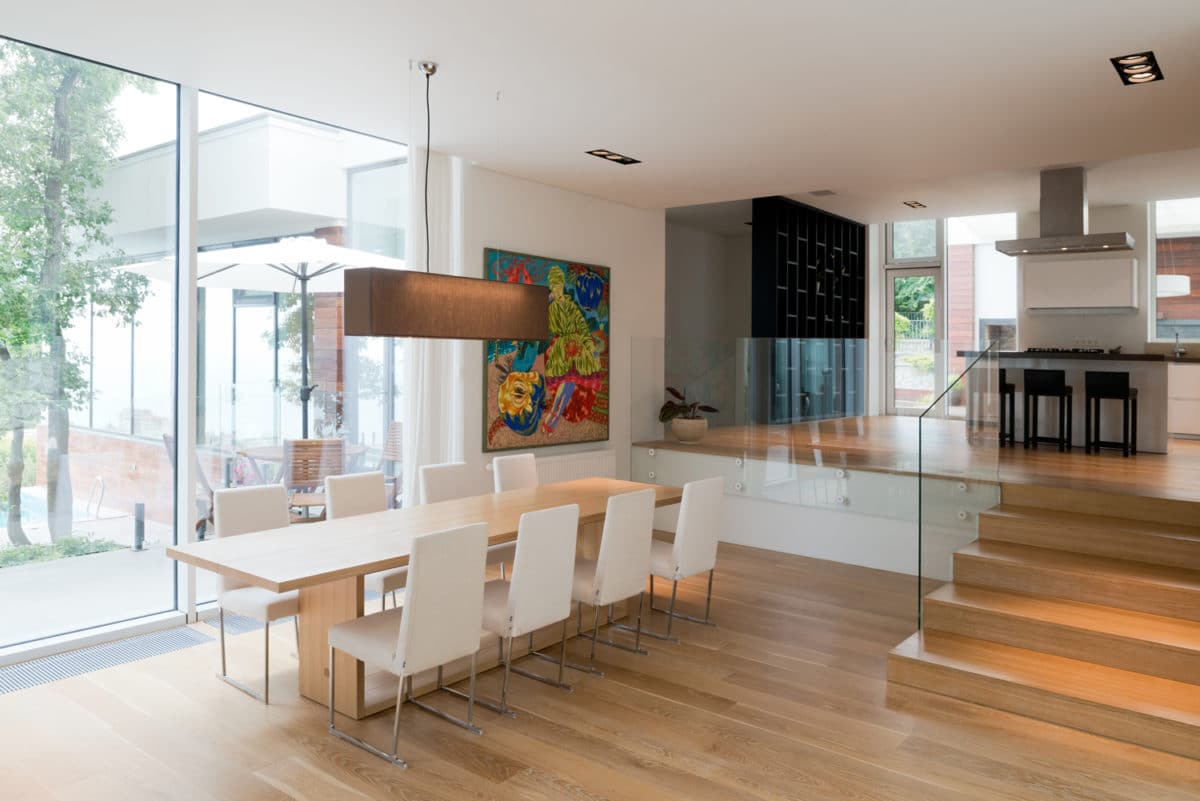 The TV lounge is a standard of minimalist style, and a bright picture with original patterns attracts attention. Here, on a soft armchair or sofa, you can relax and just relax. In the whole house not just bigPanoramic windows - they are here from the floor to the ceiling. Due to this, visual space and ease are achieved. In the bedroom, this effect is maximally strengthened due to the presence of three such walls. Well, the highlight of the bedroom, of course, is the bath - lying in it, you can enjoy the beautiful views of the Crimean coast. The fireplace area is spacious and bright. Its color solution is sustained in the same concept as other rooms, and accents are bright accessories. On the ground floor of the villa there is a hammam, in front of which there is a comfortable seating area. The comfort of this room is created due to muffled colors and a wood-lined ceiling.

Bright interior of a family of travelers: an interview with a designer

Interior of a country house: a good layout and a minimum of furniture

Interior of a country house: a spring project from the Fazenda program

Bright interior of a modern house: a combination of elements of Provence and Scandinavian styles

Have you ever been to Brazil? Villa at the foot of the mountain