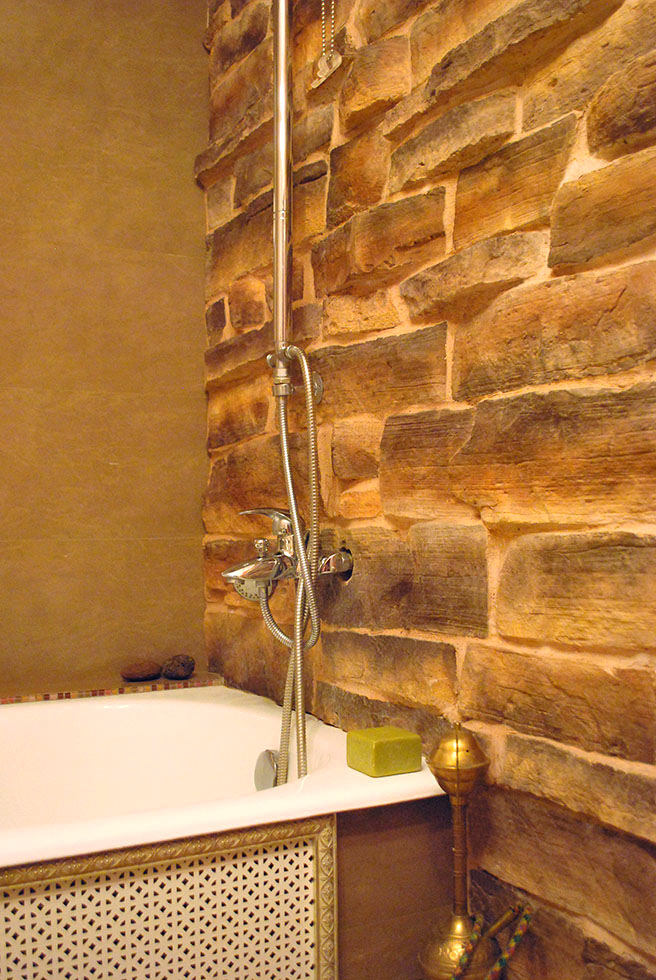 How creative people create interiors and why themapartments become unique? Probably, they do not deny themselves anything and do not set boundaries. Understanding! This charming apartment, a bit like a dollhouse or just fabulous, is located in Chelyabinsk and belongs to a creative girl who specializes in design, but not interior design. He is just a kind of hobby for her. Oksana Pigina designed her apartment with her own hand, resulting in a completely charming home. Oksana Pigina, designer Professional advertising designer (printing, web), creator, branding specialist (Yekaterinburg, URGU). Occasionally makes public, private interiors (including as part of creating a brand concept). Artist (abstract, naive). When a designer, and even more so an artist, does something for himself, this is probably the most difficult thing. Difficult because there are no and cannot be any frames! After all, you accept many styles, you love them all - and what will you choose in the end? In my opinion, the brighter the individuality of any person, the less standard interior solutions are suitable for him. Often you have to create non-existent things, rethink ergonomics in order to feel the harmony of space.

In this apartment itself was radically changed.the purpose of the premises. The kitchen has turned into a bedroom. The dressing room and the walls that form the entrance hall were demolished. As a result, the hallway was reduced to 0.6 sq. m. There is simply no need for more, Oksana is sure. And the kitchen has also been redesigned globally. Its area was 7.5 sq. m, after the renovation it became only 3 sq. m. 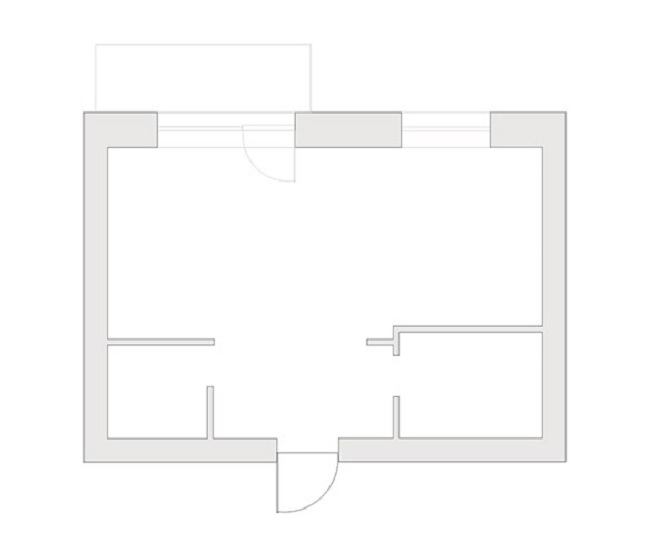 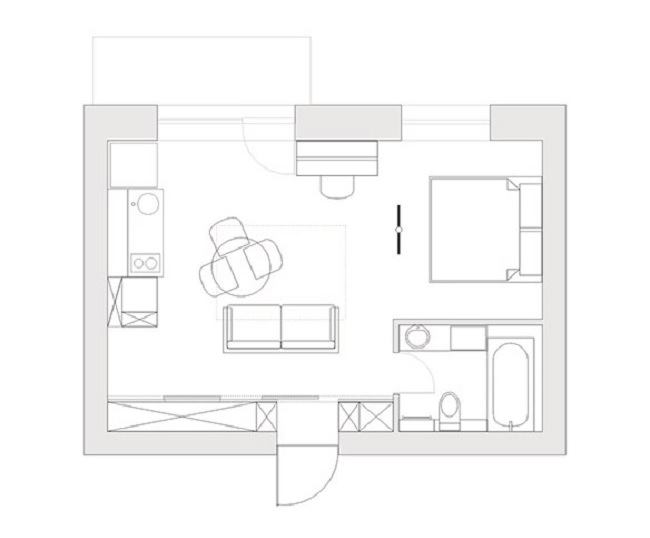 Oksana wanted her apartment to merge withnature that is nearby. The house was built almost in the center of the city, and there is a forest next to it. Nature, environmental friendliness and naturalness were supposed to fill the apartment as much as possible. I wanted more clean air, so there was a fan in the room, not an air conditioner; the softest cork on the floor; the balcony is not glazed and the windows are open all the time. I really wanted to achieve the brightest possible room and learn how to expand the space indefinitely. And also - so that the bath was cut into the rock and there was a waterfall. To some extent, Oksana managed to realize this too. The girl was categorically against folding furniture, mini-furniture, a fenced-off space for a bedroom 2 mx 2 m, without windows and air. 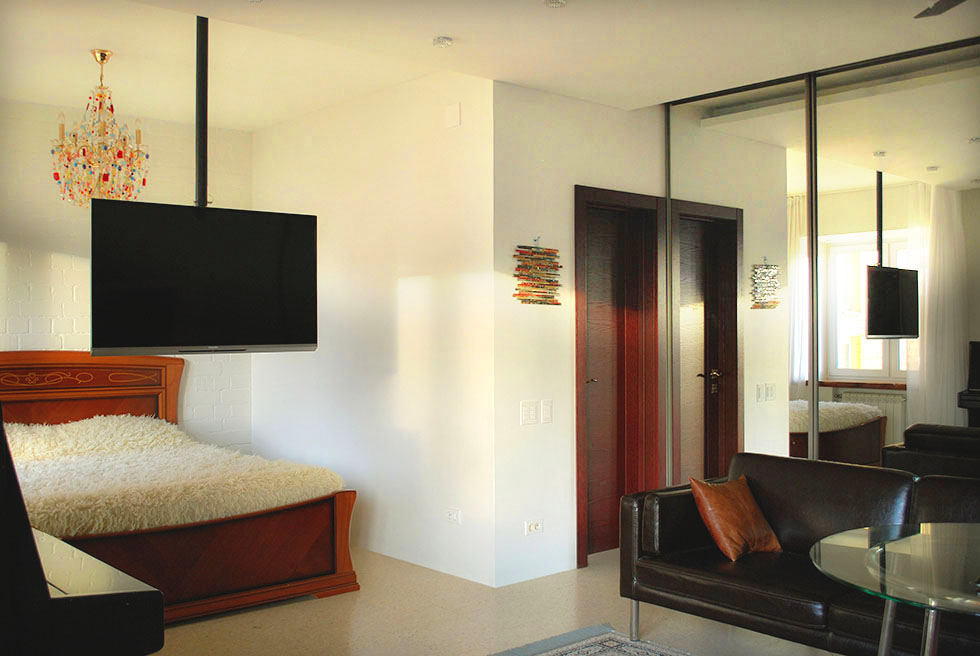 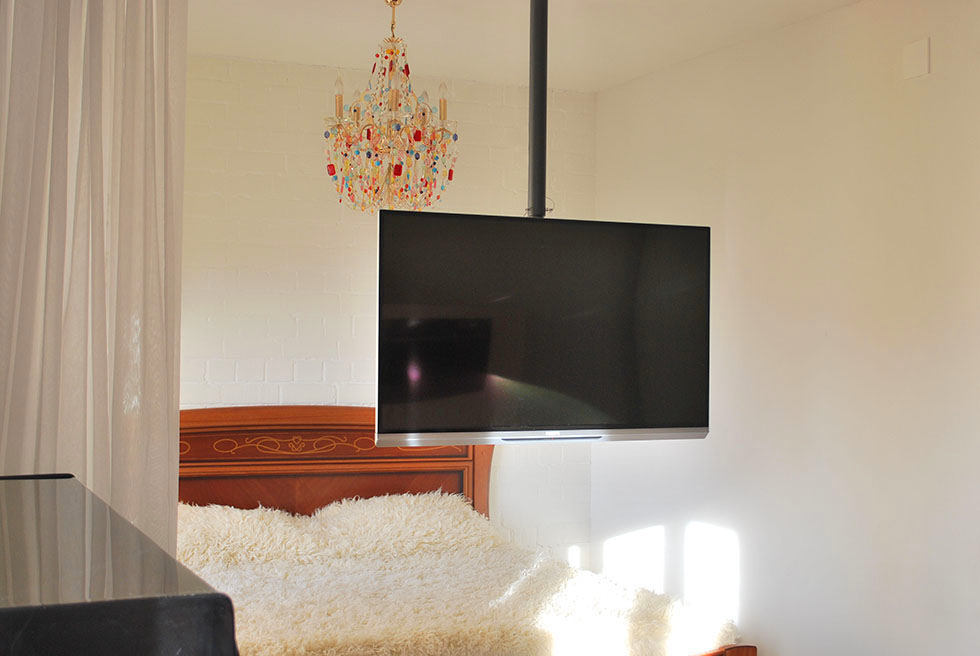 Since the girl has a busy rhythm of life, oftenyou have to hold business meetings right at home. Therefore, another important task was the need to provide for the possibility of business communication with two or three customers at the same time. And the TV should be comfortably viewed at the desired angle from any point. The bedroom, by the way, can be easily fenced off with a light curtain if necessary. 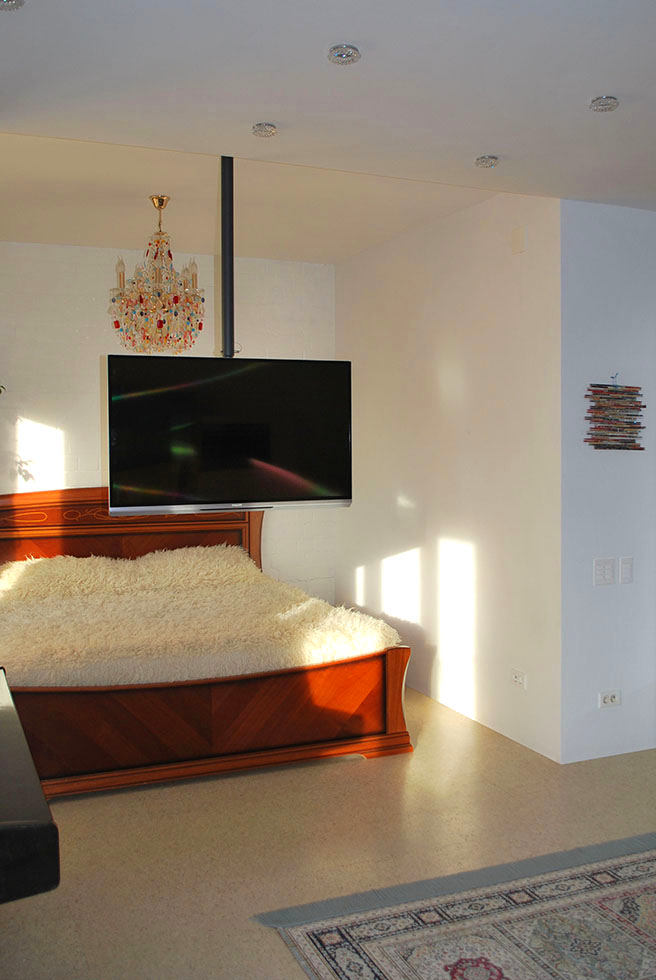 Light here essentially performs the function of zoning.In addition, in a small room there should be as many light scenarios as possible so that a person feels comfortable in different roles. There are three types of lighting: maximum light (the type of luminaire is not important, the intensity is important), intimate, relaxing light (ambilight TV backlighting is very good), decorative light - lamps with crystal elements that create patterns on the ceiling. This chandelier, I must say, has undergone changes. At some point, Oksana wanted to add colors, and she hung over a hundred elements on an ordinary crystal chandelier: Italian beads, roses and chains. The bathroom is decorated with a wrought iron chandelier with floral décor. 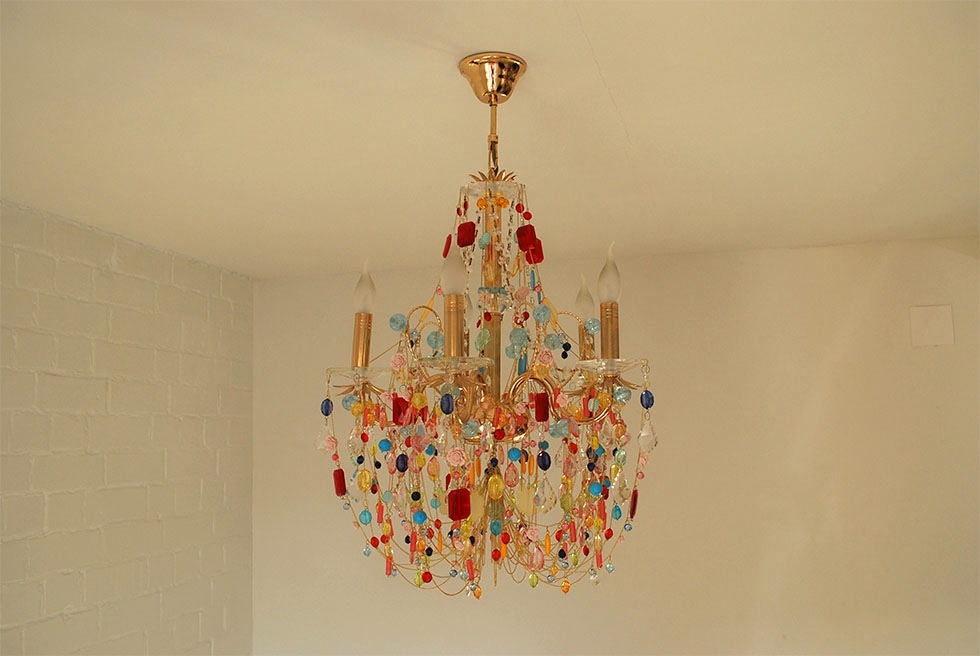 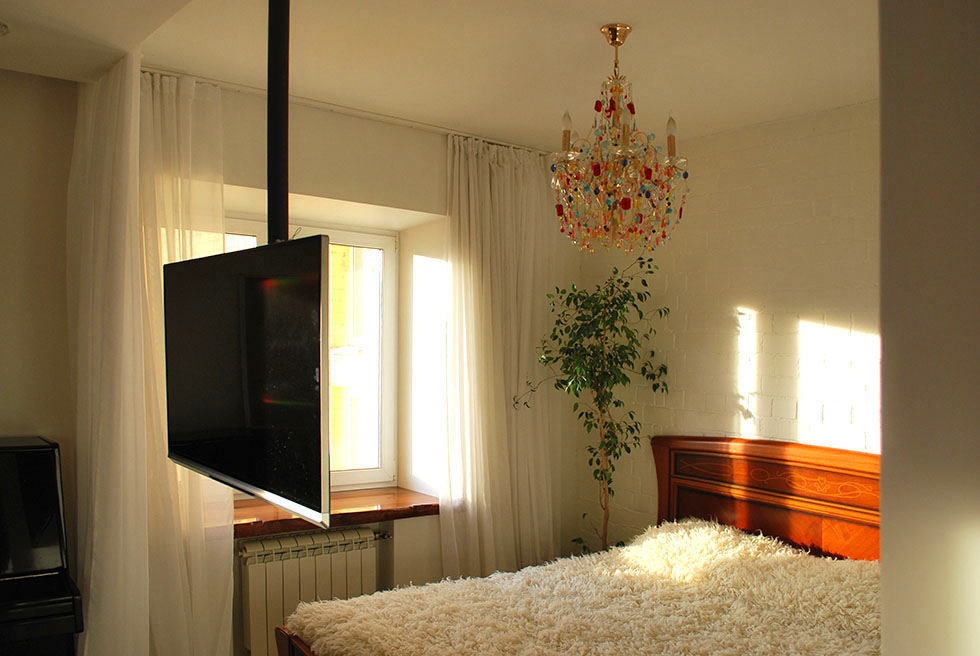 The choice of color combination in the apartment, rather,due to the peculiarity of the creative artistic manner (bright rich colors of abstract works, endless pulsating combinations of colorful spots of watercolors), passionate love for Eastern culture and the southern sun. The girl was captivated by the Togas blanket made of natural sheep's wool, so he decorated the bed. The kitchen deserves special attention in the apartment. And not only because it occupies only three square meters. It is the brightest, most unusual, you want to look at it and guess what it is made of and why exactly it is. And of course, because of the beautiful drawers. Oksana Pigina, designer: - The version of the kitchen that we currently have is the third. One was creamy white and beige based on Arabic script. Then I saw "Kandahar" and it became clear that the Arab "fear of emptiness" has no place in my house. Thinking over the second option, I folded the structure with the need to place a plumbing pump, a water filter, and remove the kettle from my eyes. I am convinced that a small apartment simply does not need a large kitchen! I love to cook, but I don’t do it from morning to evening, and I don’t eat from morning to evening, and I don’t have a bunch of children to feed all the time. So only the essentials remained. Even the separate oven was abolished. Then I thought that looking at the large plain surfaces opposite the bed for a long time, no matter how complex or simple they were, would inevitably get bored. It’s probably surprising, but Oksana was inspired by the make-up for today's multi-colored facade. More specifically, this is a photo found on the Web. 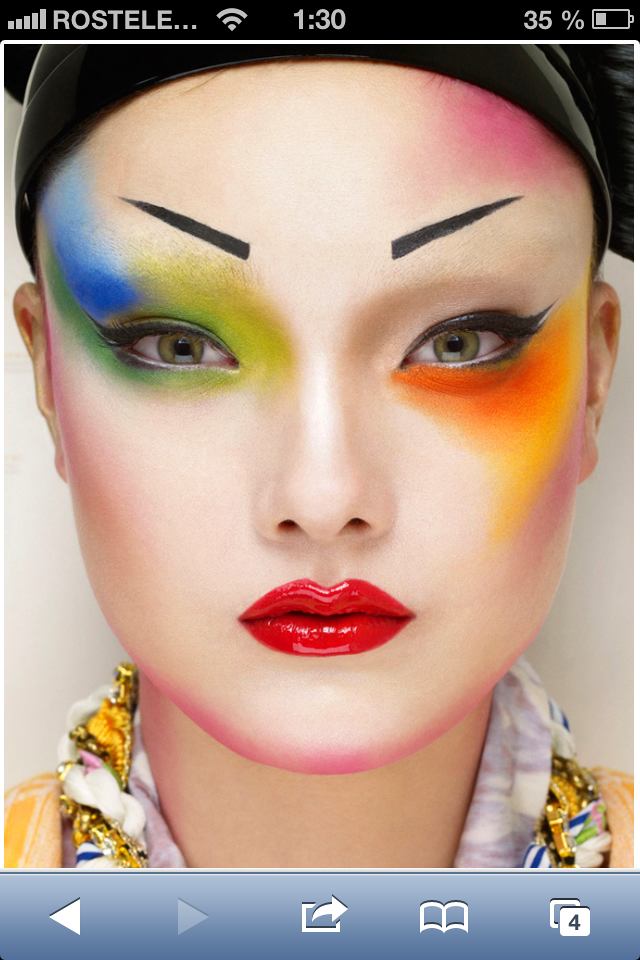 And already in the process of selecting shades, the colors of steelSlightly softer and more tender. Then the search began, how and where all this could be translated into reality. The girl even sculpted the facade samples from solidifying plastics. As a result, this idea could be embodied in the studio furniture "Servant'es". Here, individually wrote a program for the machine, created individual cutters. Grinded, painted, too, in the atelier. Digital tinting according to NCS. Fittings - Blum. 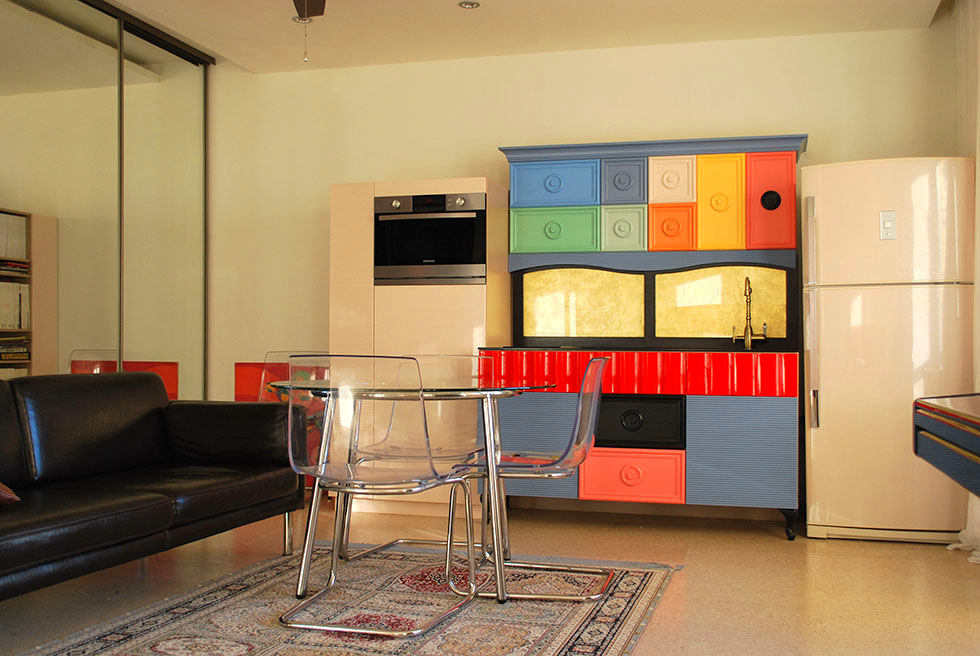 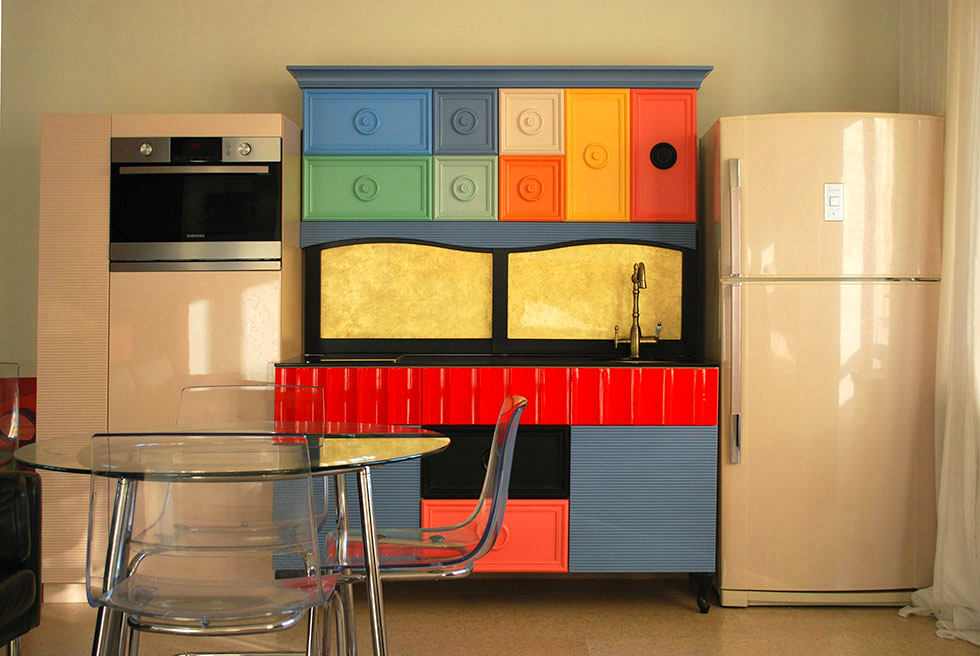 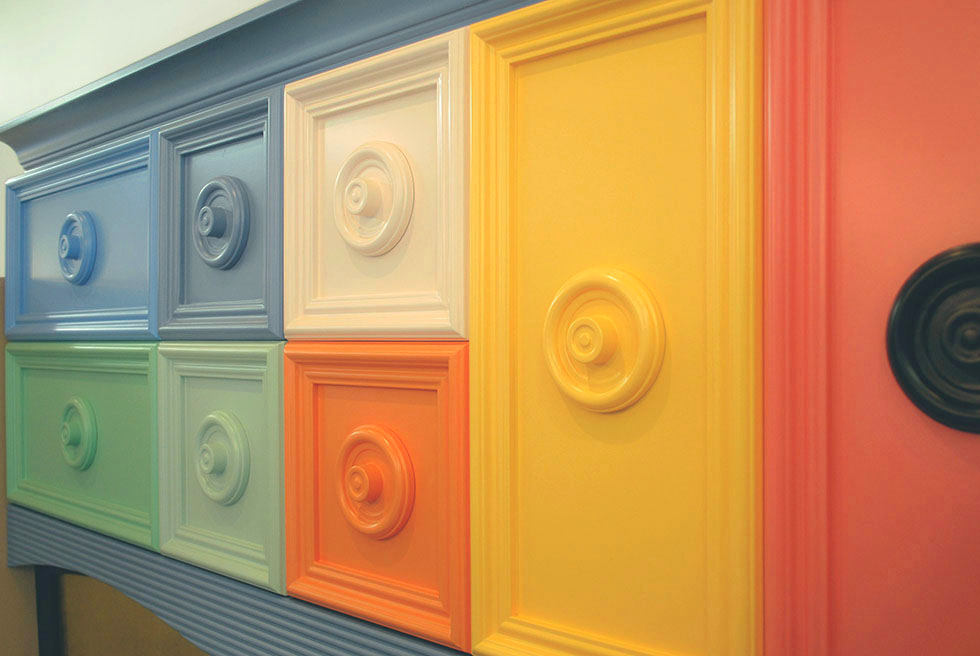 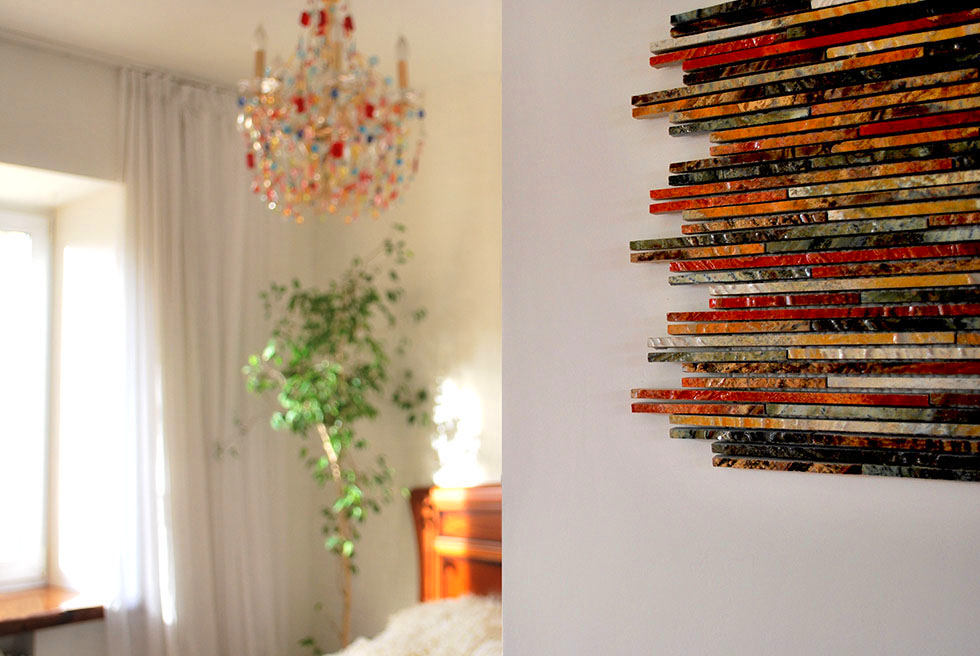 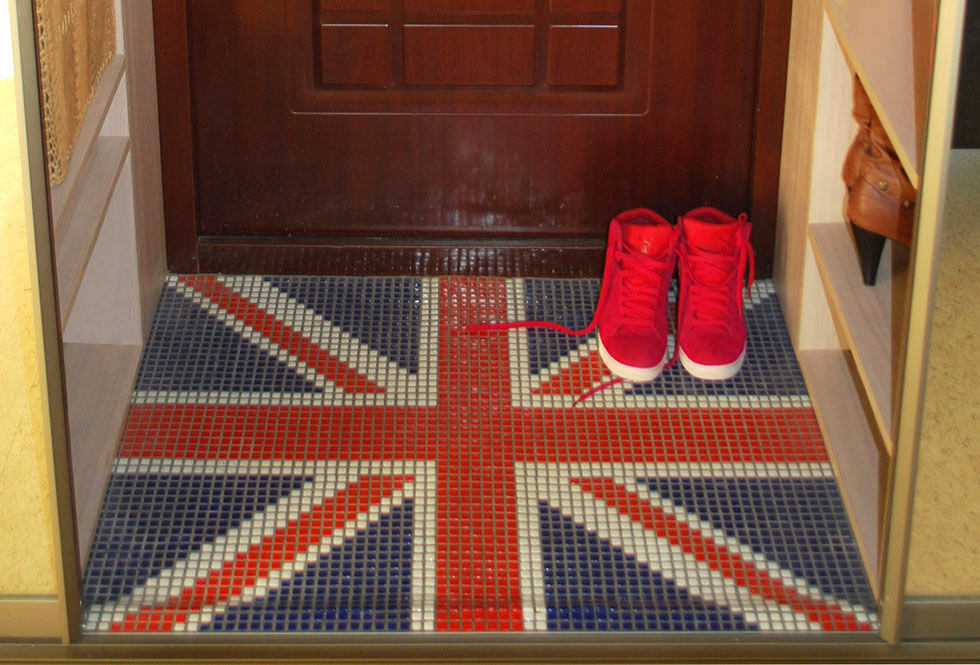 The bathroom in this apartment is very warm andDisposing to rest. And still unusual: Oksana placed the shell at a height of 100 cm, which turned out to be very convenient. Her dream of a waterfall and a rock she realized by making a wall with a stone. 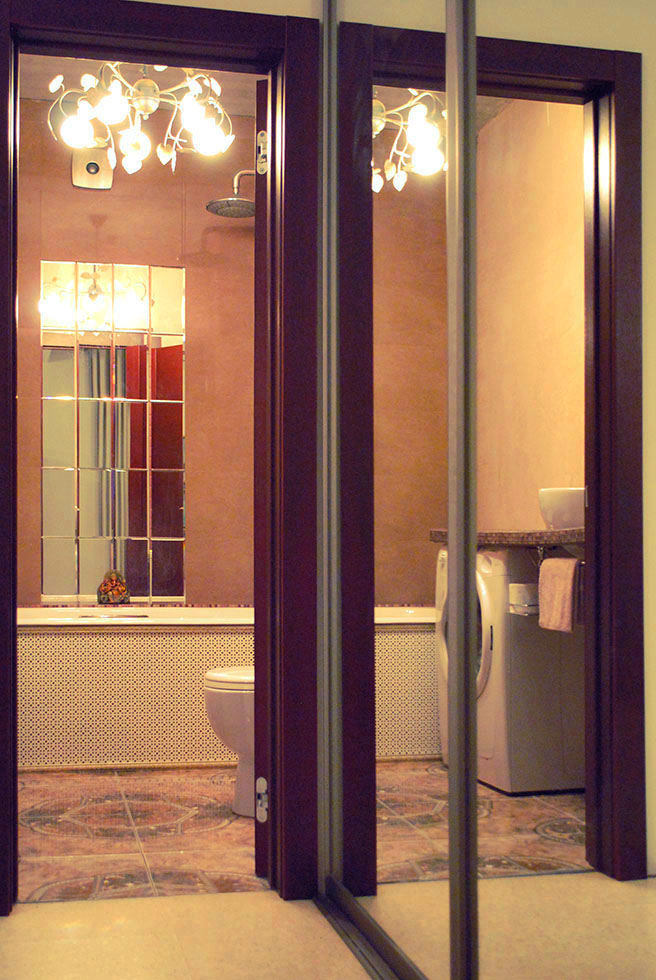 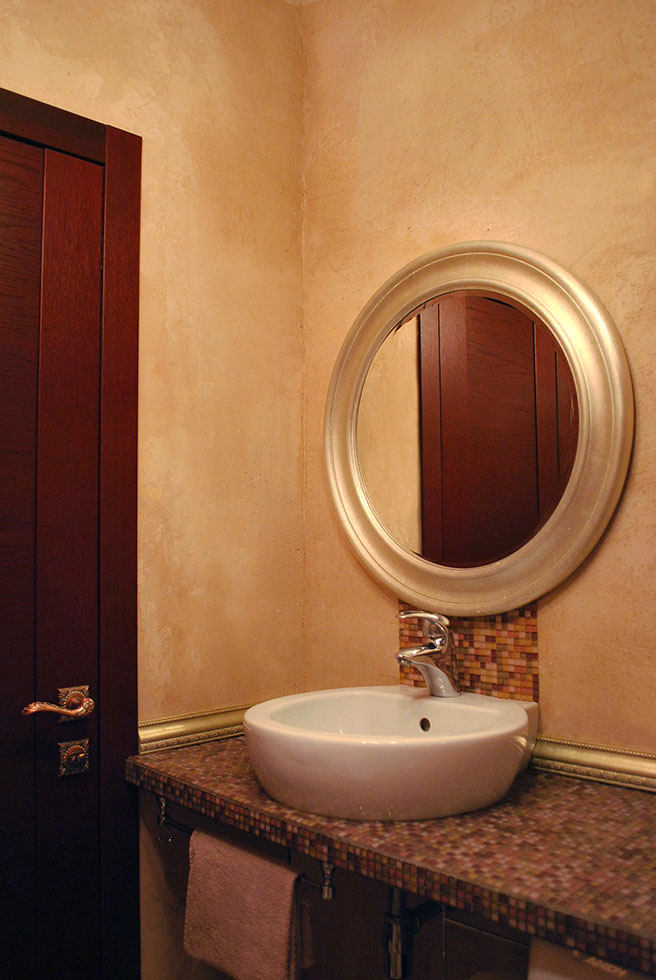