With space, the authors of the project were especially lucky. The layout was good initially, so the subsequent changes were minimal. In the house there is an open space, a good arrangement of rooms. One can not help but note another of his virtues - the presence of a second light. As for the palette of the interior, the customersPreferred a combination of white, beige and dark brown colors. Therefore, the project uses a dark oak texture, white for walls, gray for tiles and furniture elements. The color decision was dictated by the choice of more delicate lighting. For the general light, the architects used the built-in Grid D In Trimless 2 QR (Delta Light) lights, and above the living room area, in order to emphasize the height of the room (here it reaches 6.3 m), the composition was hung from large Floral (David Trubridge) Which cast very beautiful shadows. The central element of the interior composition of the house was a vertical three-side fireplace. Being in a two-space space, he simultaneously separates, and collects it. Furniture composition in the hall, shelves near the fireplaceIn the living room and in the bedroom, a library on the 2nd floor is planned to be made to order from Ukrainian producers, according to the author's sketches. The kitchen will be bought ready, but its manufacturer has not been selected yet. In the living room there is a sofa Minotti, armchairs B & BItalia, table Cattelan Italia. Dining table and chairs (including bar) in the dining room - manufactured by Cattelan Italia. This brand liked the authors of the project using simple and at the same time refined forms and materials. For the bedroom, bought a bed and curbstones of the company Poliform, a chandelier XAL, pendant lamps Ingo Maurer (Poliform chosen for rigor and conciseness, and Ingo Maurer - to dilute this severity mischievous mood) and console table Kendo. On the 2nd floor there are armchairs B & B Italia and a coffee table Cattelan Italia. Fixtures-sconces - Delta Light. 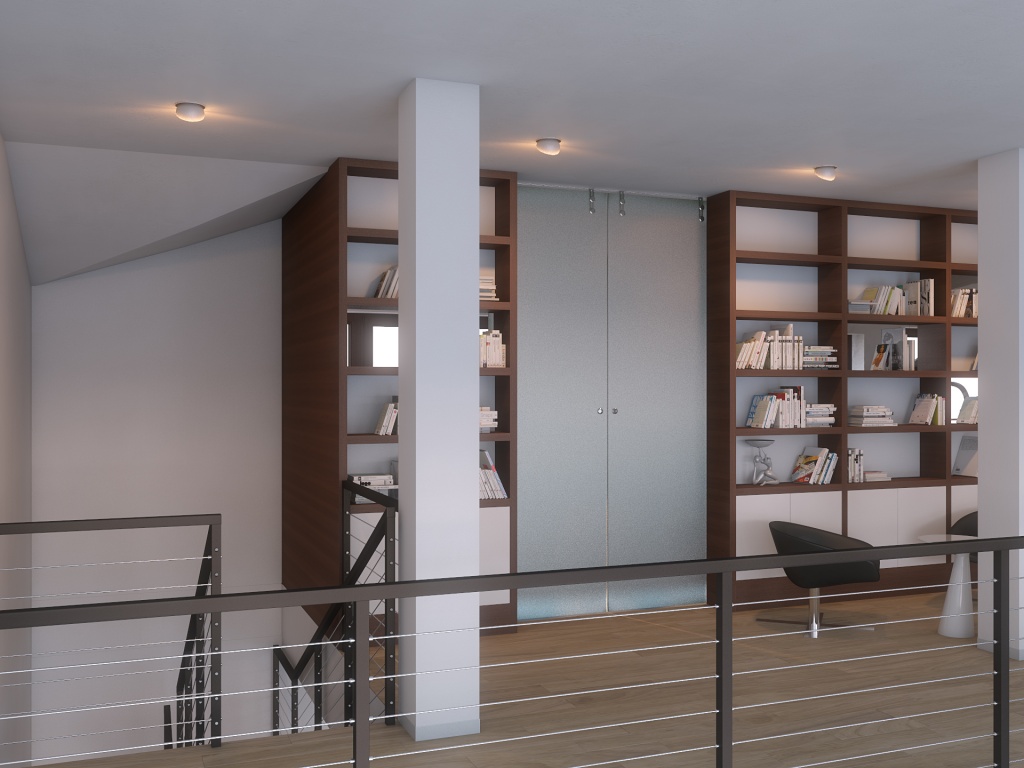 Basically tiles and mosaics are usedApavisa, bath Falper, toilet and bidet Antonio Lupi, ceiling lights Artemide. In the guest bathroom there is an Apavisa tile, an Agape washbasin, a toilet bowl and a urinal Duravit Starck 1. For the walls, a white paint is chosen. The main thing in the design of this house is simplicity and functionality. The authors of the project wanted the house to be light and airy, and also to have a lot of light in it. And they managed to achieve this. Nellie Prodan, architect: "In the house - very beautiful windows, which also form the composition of the interior. Therefore, in the public zone, they were by no means to be covered with curtains. As a result, in the living room, kitchen, dining room for protection from the sun, curtains are pleated, and in the bedroom - thick curtains and a light transparent tulle, creating a comfortable and cozy atmosphere. In all the house the ceramic tile Apavisa is used. For the floor in the main rooms, we took a tile from the collection of Neocountry, which has a beautiful texture that mimics the natural stone of warm colors. Fireplace in the living room, we trimmed with natural slate, and under the fireplace and window sill placed a marble shelf-plate, in which convectors are hidden. In the bedrooms and in the library on the 2nd floor the floor is covered with a parquet board. For interior doors, we needed hidden systems, so we chose Rimadesio. White sliding doors in the tambour - KTM ». Kirill Konstantinov, architect: "The most important thing for us in this project was that the style that customers like so much, coincided with our vision of this house. Therefore, it was easy and pleasant for us to work on the project. "

Project of the week: bright minimalism in Novosibirsk

Interior of a country house: a spring project from the Fazenda program

Mansard floor: how to create the effect of a country house in an apartment

Interior of the week. Respectable minimalism