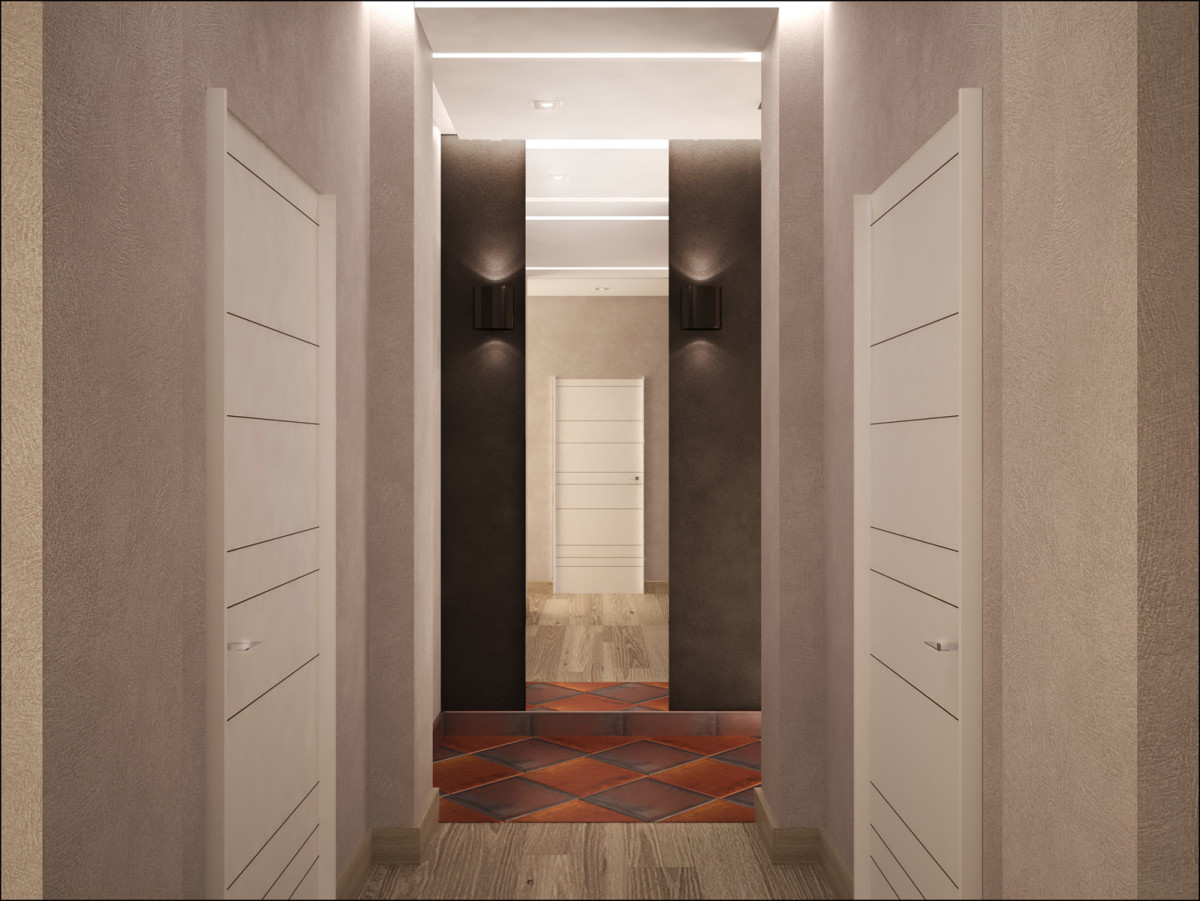 When buying a large apartment, few peoplethinks about what to do with the "extra" square meters. After all, there will still be few living rooms, according to the number of windows. And the darkness remains for meters. Much has been written about what to do with them in our article How to make a comfortable layout in a small apartment, but little is known about how to fix the mistakes of developers in large apartments. In the pursuit of square meters, no one seems to notice that the resulting unimaginable "three" with an area of ​​150 square meters. It is then that the work of architects becomes in demand, who do not have to look for hidden opportunities, but, on the contrary, successfully add "extra" meters. Today's article is dedicated to the achievements of the "Tor-Ard" bureau on the battlefield with a monstrous layout from the developer. Mikhail Yegiyan, architect and engineer Graduated from MGSU (MISS). In 2004 he founded a construction company, in 2006 - a design studio, in 2012 - an architectural bureau "Tor-Ard". Leader of a team of specialists who embody high-quality interiors. This apartment in a prestigious building in the west of Moscow was bought by the newlyweds a couple of years ago. At that time, they assumed that at 140 meters there would be several living rooms and there would still be space. At the time of renting the apartment, when they were able to see it together with the architect from the "Tor-Ard" bureau, it became obvious that the depth of the premises (the distance from the wall of the common hall to the windows) is almost 10 meters, while there are only four windows. Thus, it was possible to distinguish four rooms with natural light: a bedroom, an office (future nursery), a living room, a dining room-kitchen. The customers decided to combine the kitchen with the living room and dining room, the result was a three-room apartment with two spacious dressing rooms, two bathrooms, home laundry and a pantry with wine cabinets, and the ratio of living and auxiliary space was 50/50 percent. At first, the owners thought such a ratio was unreasonable, however, having carefully examined the resulting layout, they realized that it would be very convenient to live this way. You can place all things, including those that often have to be stored in the garage or in the country due to lack of space, and even there is a place for bicycles.

All the outbuildings and bathrooms are lined upaway from the windows, and the bedroom, study and a spacious living-dining room, the same kitchen located along the front wall. For all the logic of this layout, a considerable area (23.8 square meters) was allocated to the entrance hall and corridor, which was planned in this way because of the urgent desire of the owners to make the premises isolated. 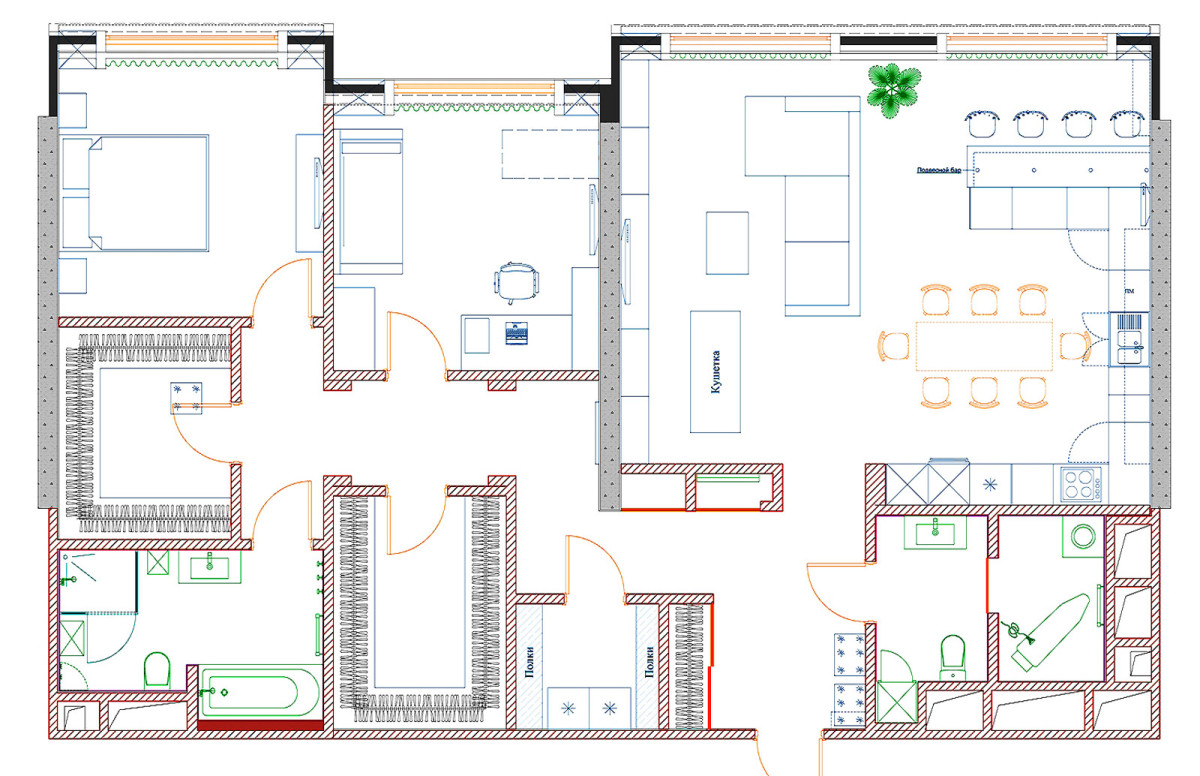 The hallway sets the tone for the entire interior from the threshold. Immediately it becomes clear that the interior will be dynamic, contrasting, expensive. This is "talking" white glossy linens cabinets and doors, dark walls, interesting tiles on the floor. A special chic sets the lamp from Murano glass. 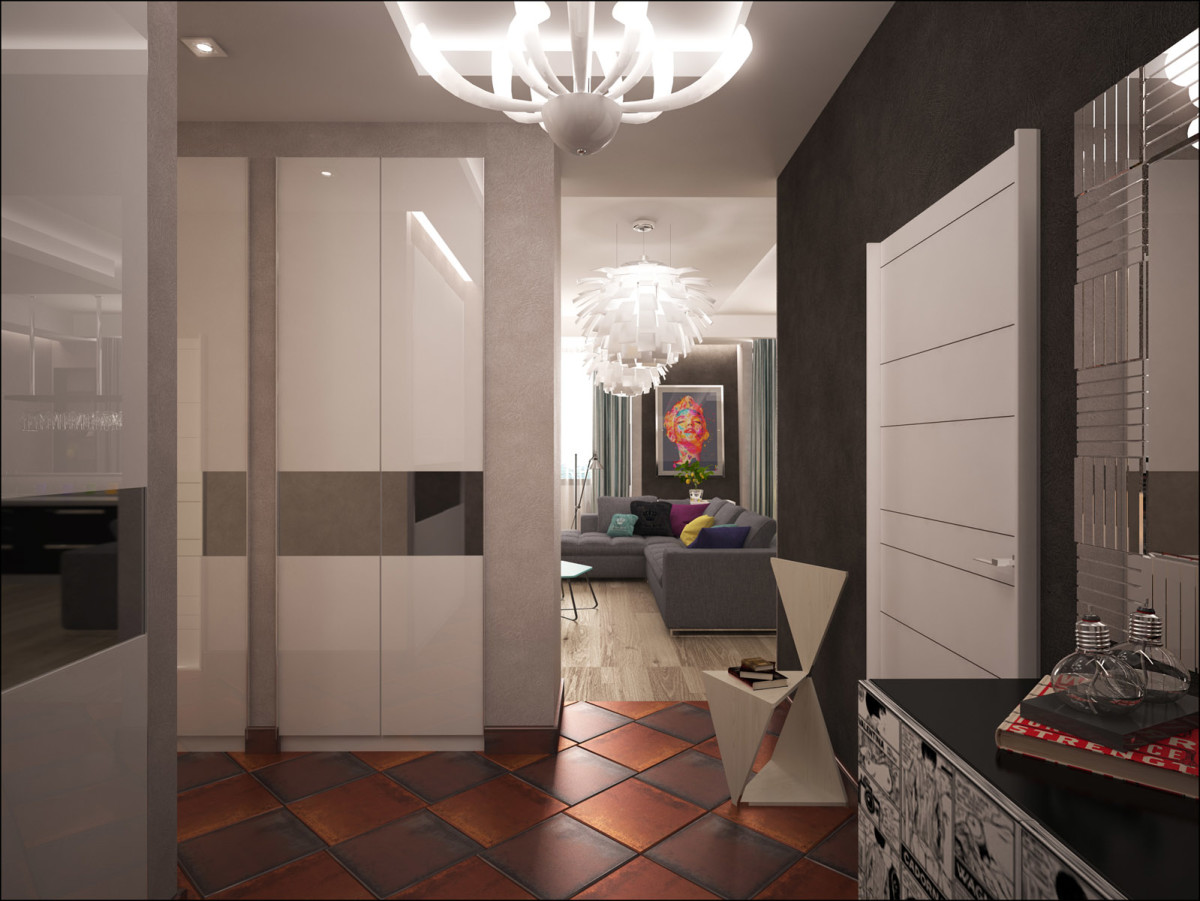 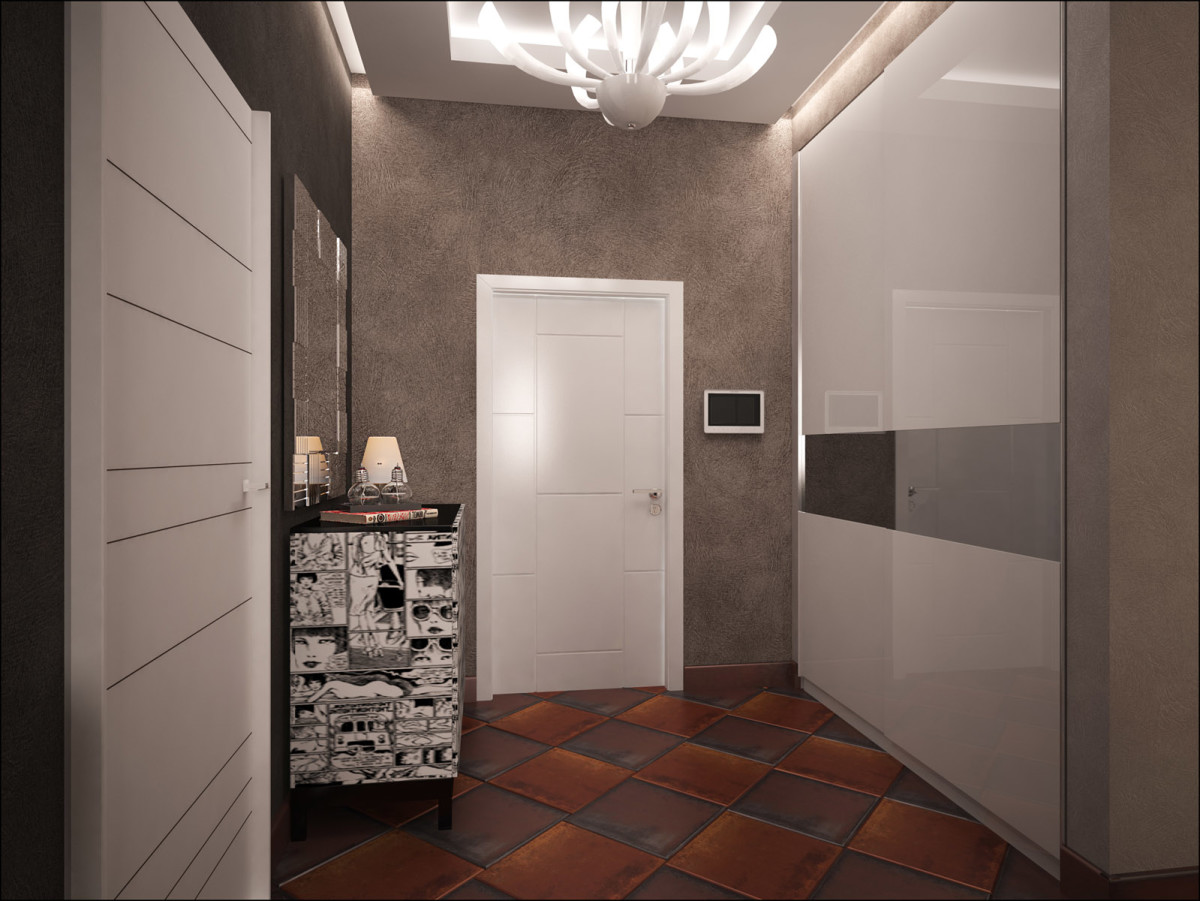 In the center of the living room is a large cornersofa. In this room there was also a place for books. And although the shelves are not designed to store thousands of volumes, they can fit a decent library. 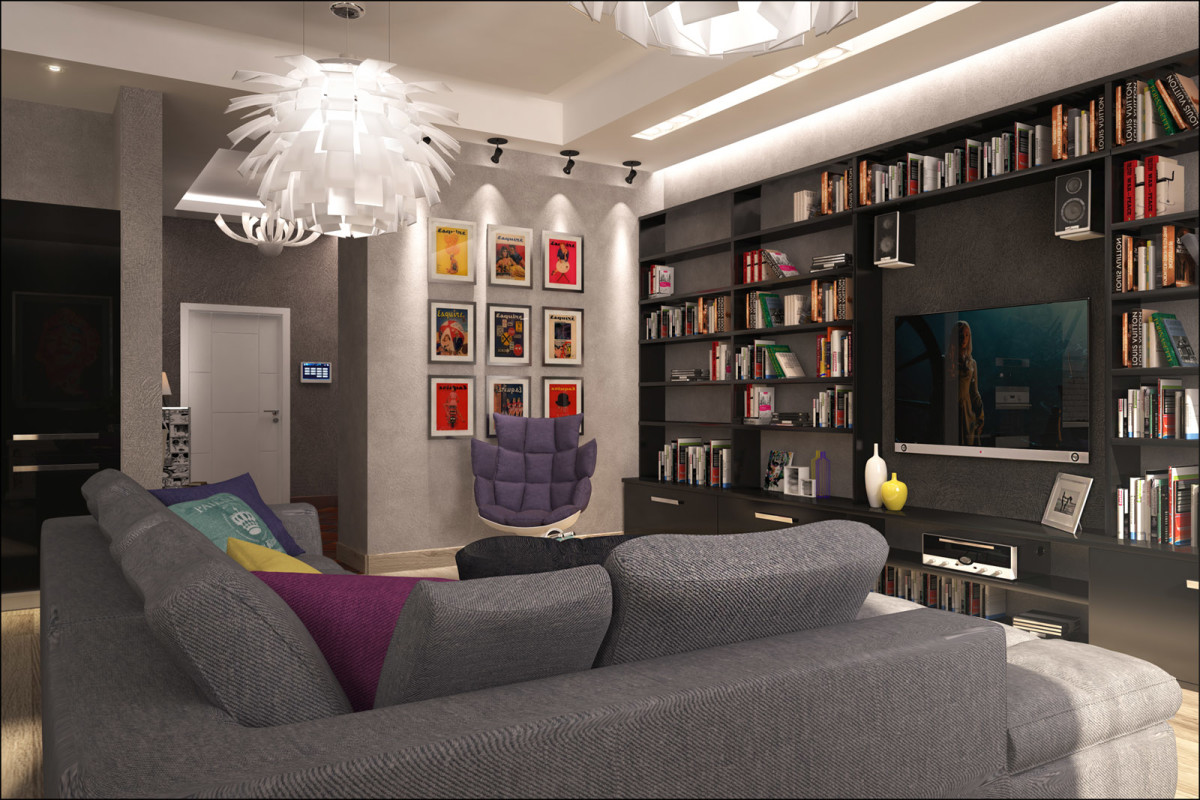 The kitchen is equipped with built-in appliancesmaximum. " For this, a niche was designed, where tall and deep cupboards fit. There was a place for a small bar. The long table top allows you to cook "on a grand scale," and many cabinets will fit all supplies and utensils. The only possible disadvantage of such an integrated layout is the smells, but with them a powerful hood above the stove will be straightened. 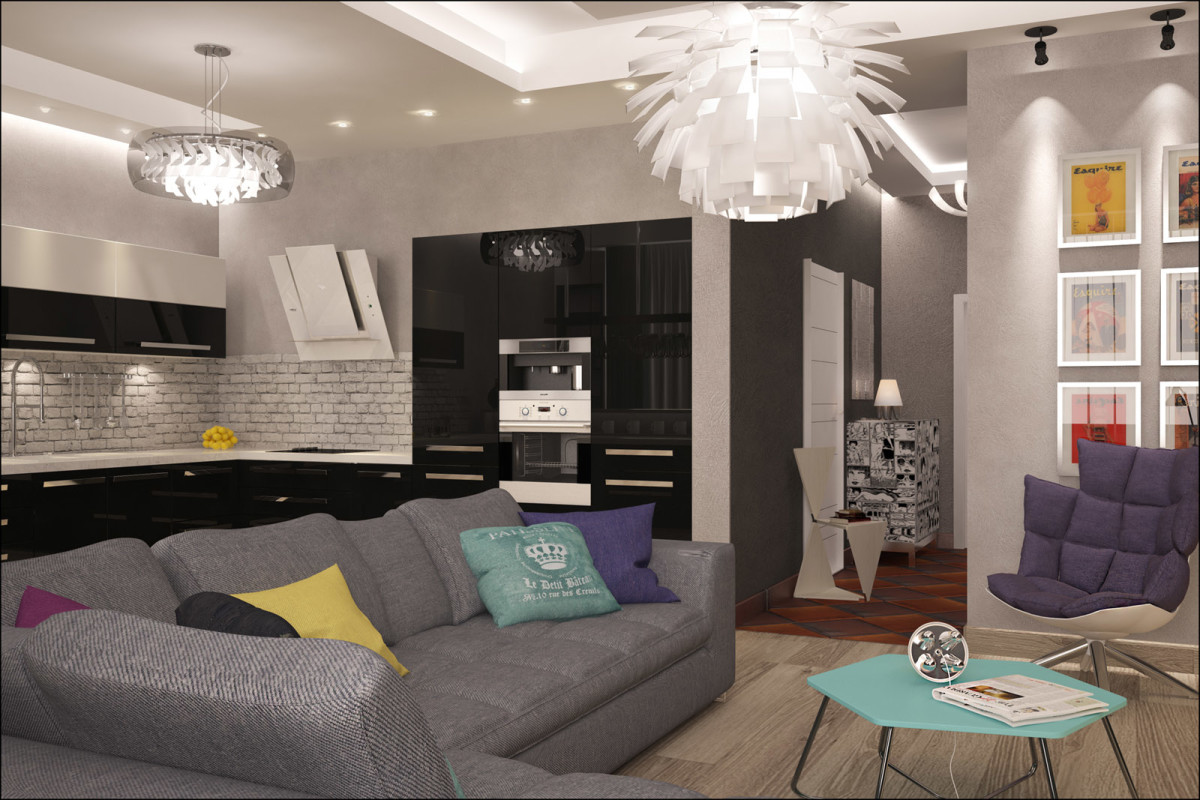 The most remote room is allocated to the bedroom. From it you can not hear the noise of the TV in the living room and the sounds of cooking. But nearby there are extensive dressing rooms and a bathroom. In design, the designers of "Tor-Ard" adhered to the neoclassical approach, when modern objects are combined with classical stylizations. The head of the bed is an interpretation of the capitone upholstery. Turquoise wallpaper with an ornate pattern is supported by a ceiling light. 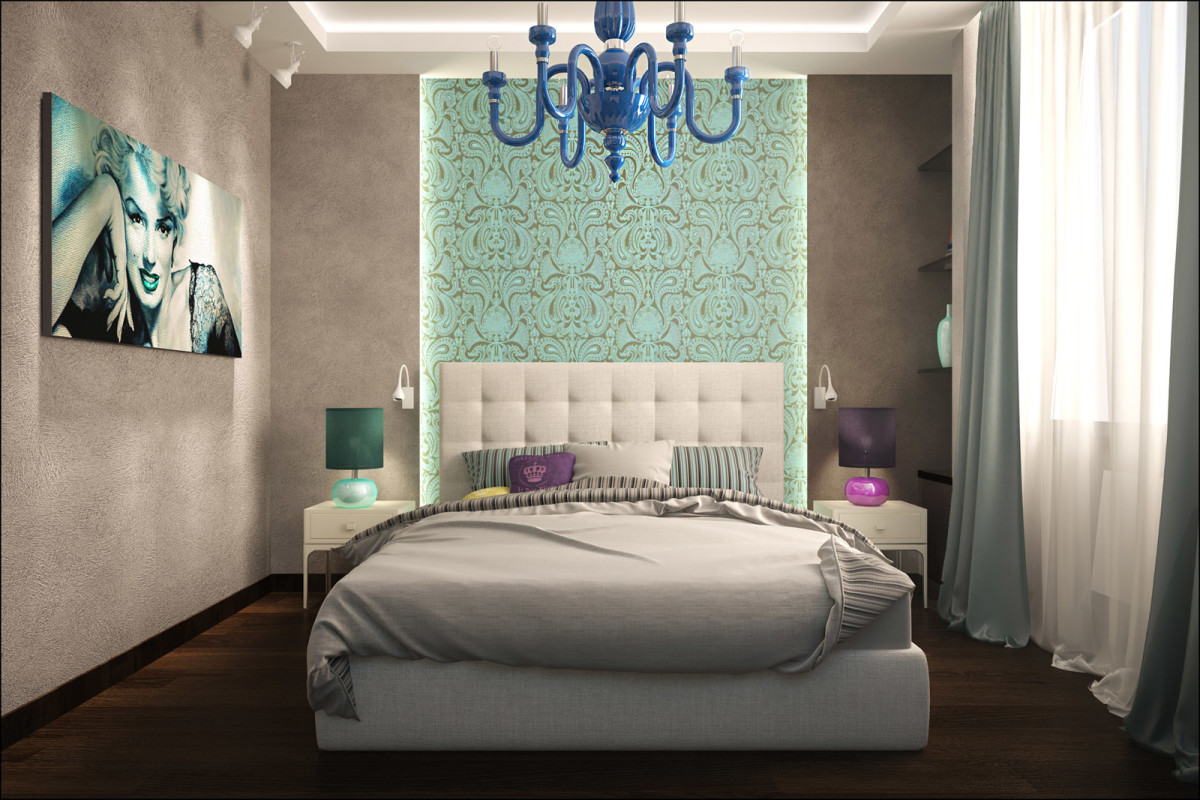 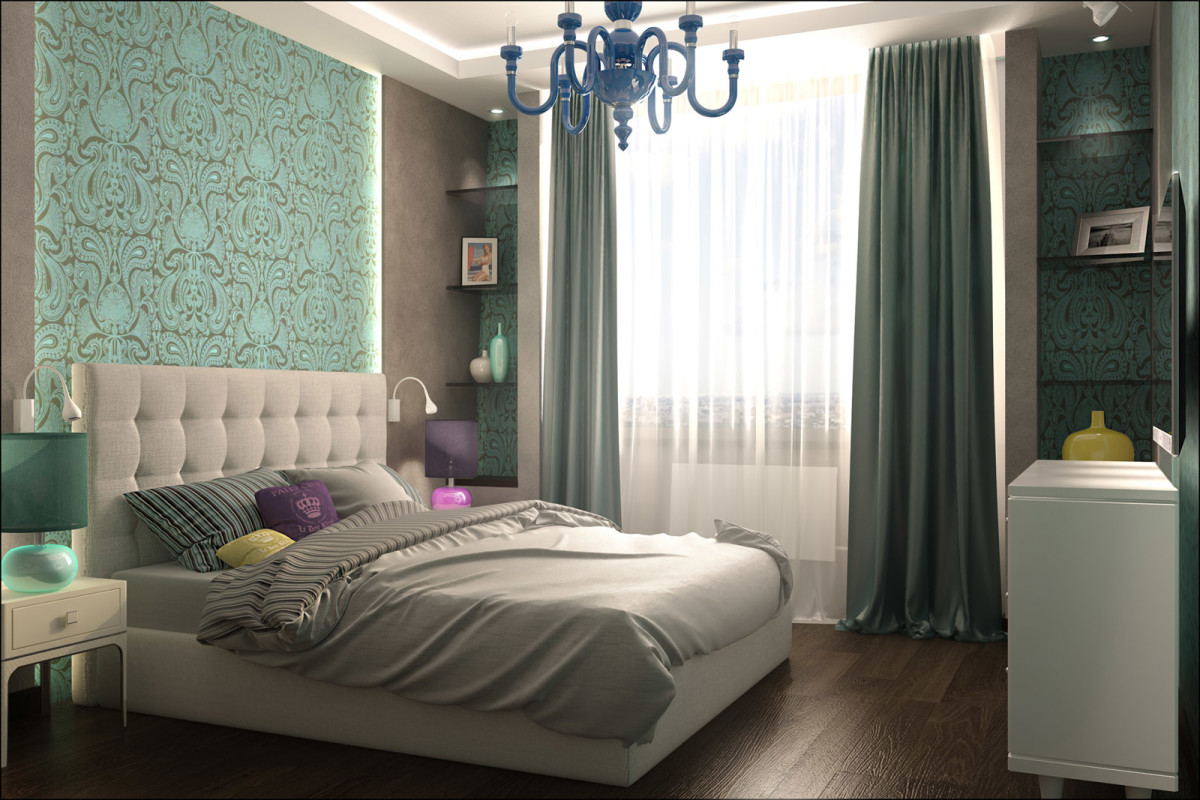 In the future there will be a nursery, thereforethe interior is made as neutral as possible. Then the walls are covered with cheerful wallpaper or painted in a joyful color. Now the room is more like a bachelor's home: boards on the wall, a computer with a large monitor, a soft sofa and a TV with a games console. 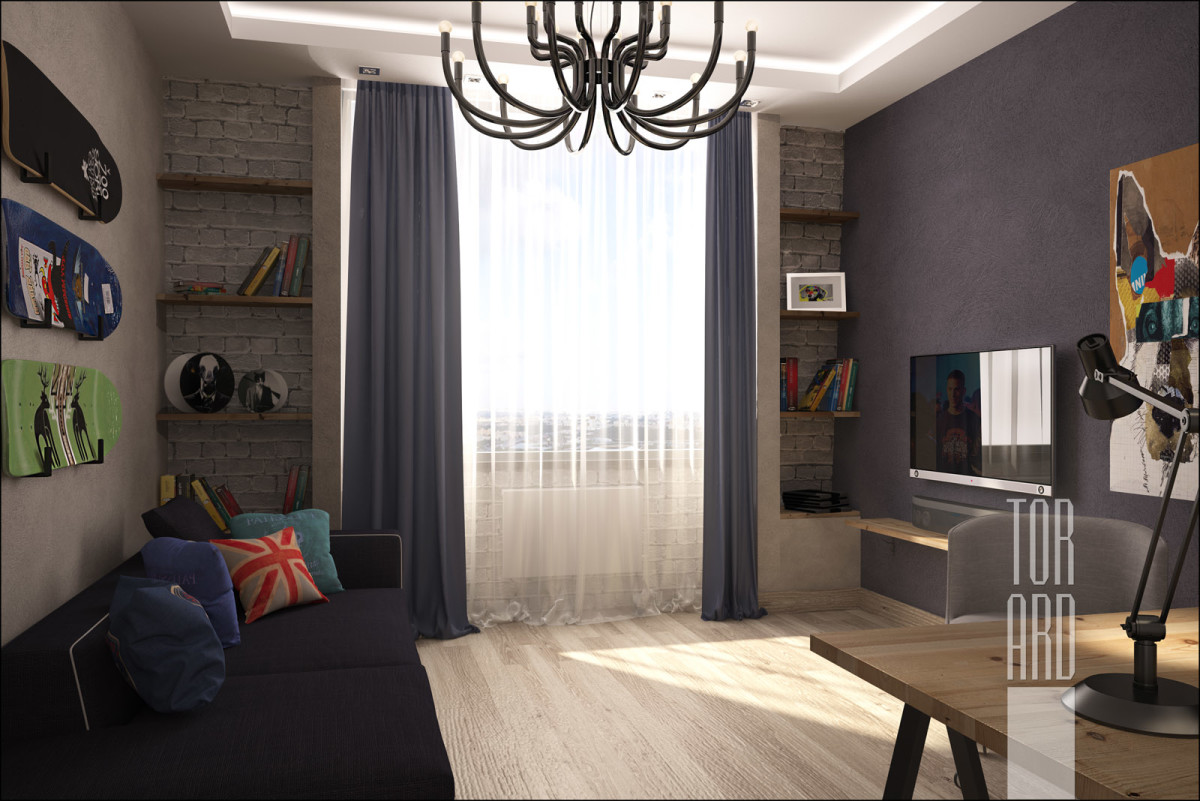 Mosaic and fine decorative tiles turnedsanitary unit in a luxurious room for water procedures. Built-in lighting and an abundance of modern sanitary ware gave it the character of an advanced spa. Pay attention to the bath and shower. Now they put such in most similar bathrooms. The most decorative was the guest toilet,thanks to the square tile Bardelli. This collection not only brings the element of the game into utilitarian space, but, according to the idea of ​​the authors of the project, creates a wow-effect for the guests who first saw it. 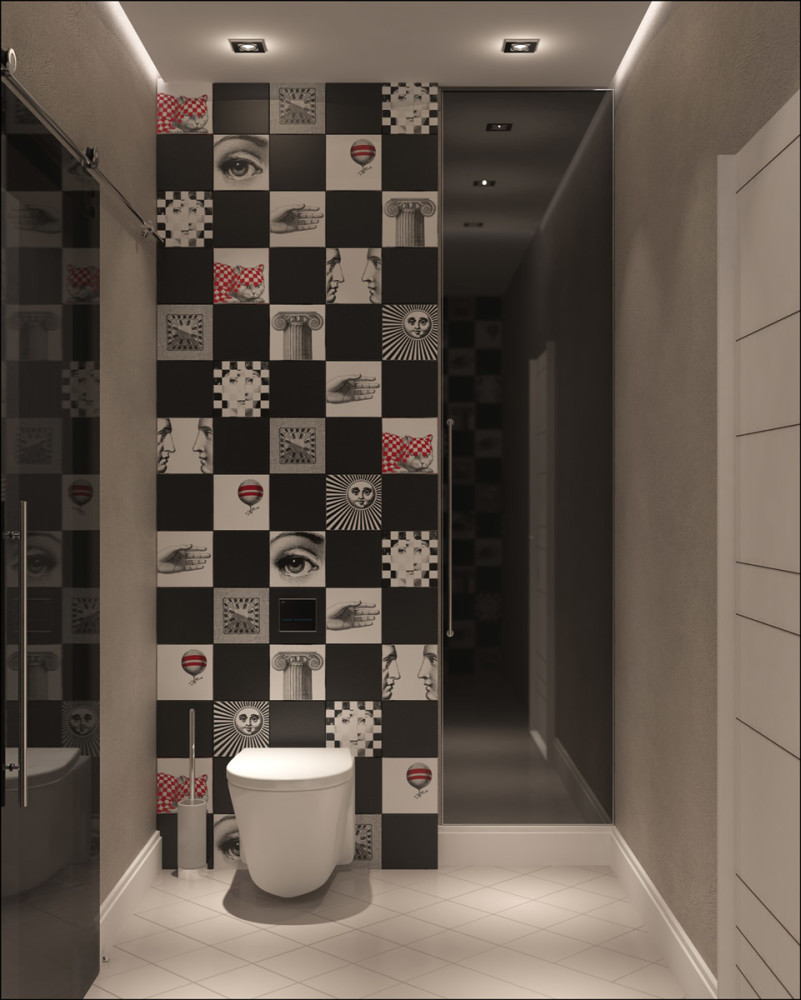 The corridor has a zigzag shape, for its visual increase the designers used a mirror that was pasted directly onto the wall in one of the bends.