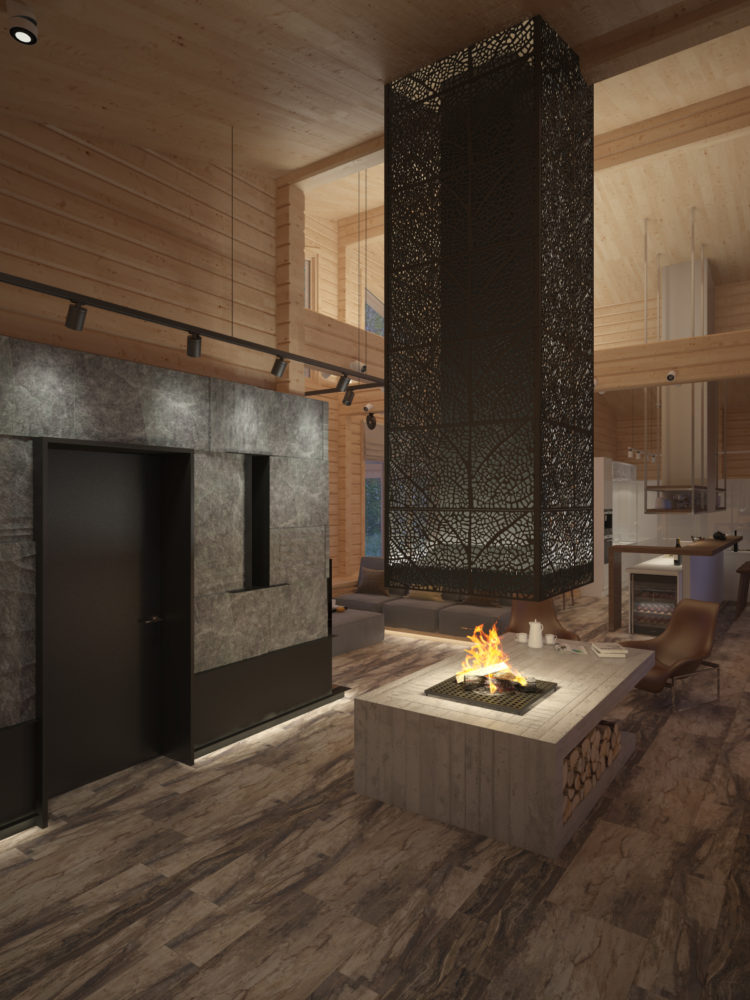 What to do if the construction of a house is in full swing, andyou suddenly realized that the interior does not suit you? The authors of this project transformed the public area in a cottage near Moscow in a matter of weeks, making it cozy, functional and exactly what the owners dreamed of. How - read in today's article Customers - a young family with two children. They lead an active lifestyle, love to travel and receive guests. Initially, the owners of the house wanted to decorate only the living room, but they found the designers thanks to our portal: Raisa Malyarenko and Pavel Vlasov took up the work on the project. The customers liked the result so much that they decided to continue cooperation and entrust the designers with the design of all the remaining rooms in the house, as well as a bath with a swimming pool. Today we are showing the kitchen-living-dining area, which was transformed in the first place. Raisa Malyarenko, designer Graduated from M. SG Stroganova, specialization - interior and equipment design artist. Teaches at the Department of Interior Design of the Moscow State University of Art and Design. S.G. Stroganov. Member of the Moscow Union of Artists and the Guild of Interior Design, head, designer and generator of ideas in our own interior design studio RAISA & Co. The development of studio interiors is closely related to product design and finishing materials, and cooperation with high-class specialists allows us to make high-quality, detailed interiors that maximally reflect the character of its inhabitants. [email protected] Pavel Vlasov, designer Graduated from M. S.G.Stroganov, specialization - interior and equipment design artist. Pavel has many completed projects of residential and public interiors, publications in professional magazines. In the past, he was engaged in monumental painting and landscape design. The customers turned to Raisa and Pavel with a finished project of the house at the initial stage of construction. Outside, the owners liked everything, but the interior space, especially the living room and kitchen area, was embarrassing. Due to the peculiarities of the layout, the central fireplace with fire did not fit in a rather large area, the kitchen was not spacious enough, and the table seemed to be on the aisle. The uncomfortable feeling was reinforced by a supporting pillar with beams, which could not be removed. 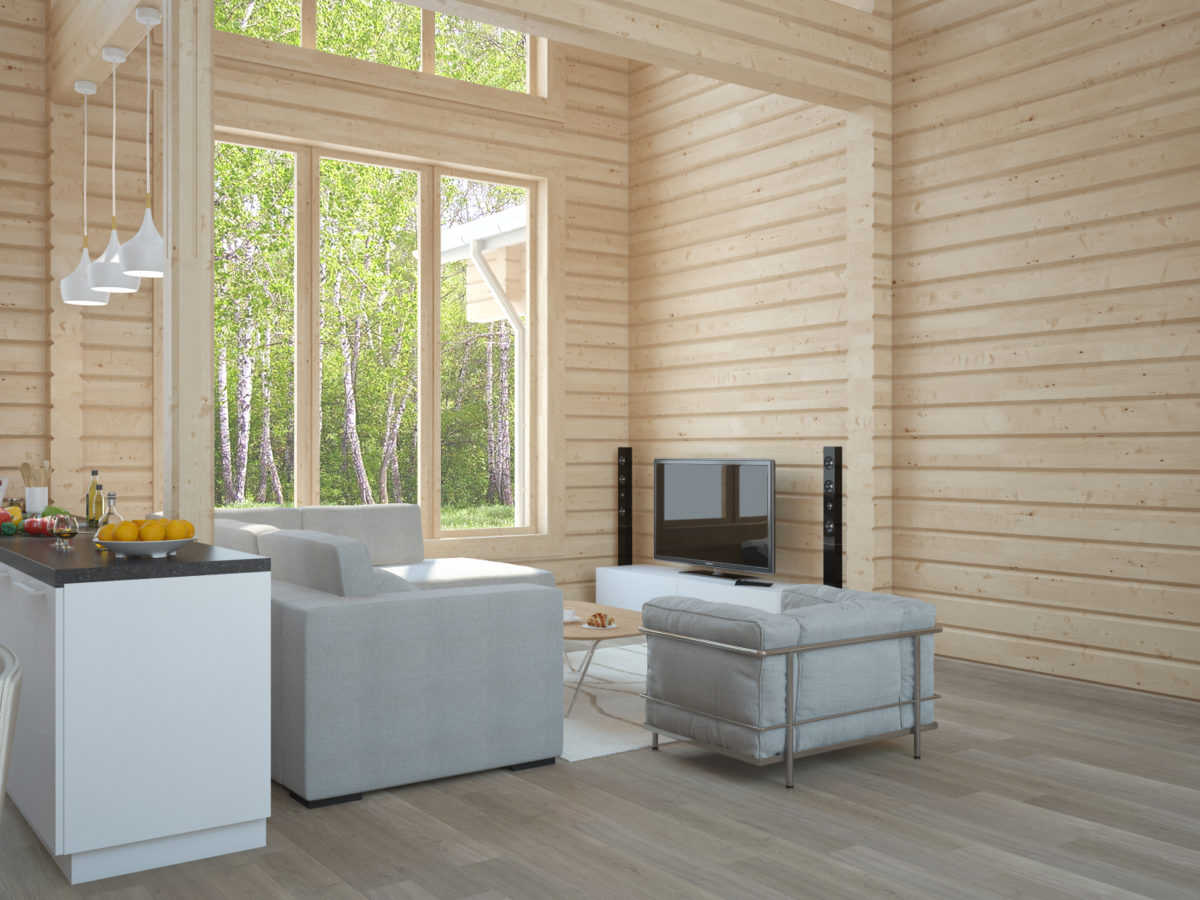 Type "before" On the development of a new concept andthe designers had only 3-4 weeks to design: the construction was suspended, and all the changes had to be made, as long as the weather allowed to have time to cover the house with a roof. To change something in the facade did not: glazing was already ordered and almost ready. We decided to do a predominantly redevelopment of the private house inside: we rethought the zoning, the inner walls were demolished and one more window was cut through. 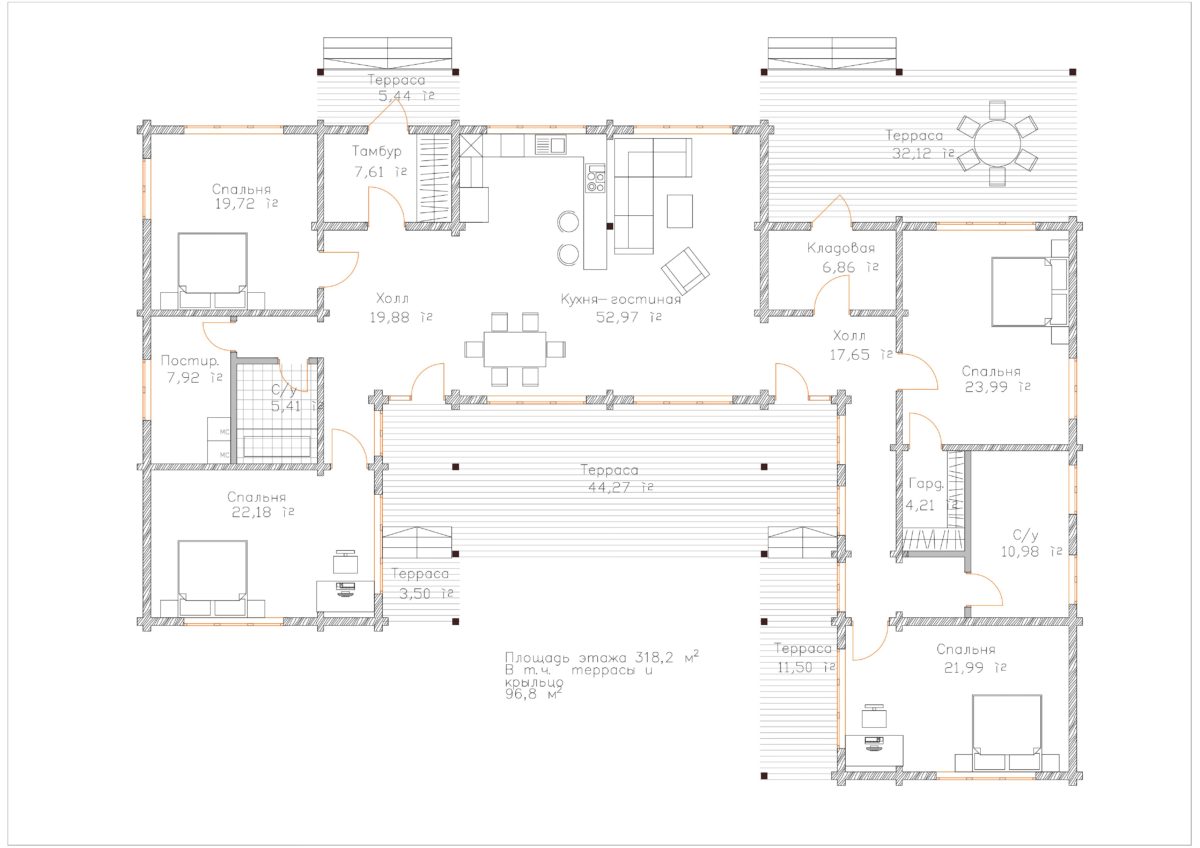 Plan after the First case got rid of the secondtambour: it did not perform any important functions, and a space of 26 square meters. m almost empty. In its place was formed a cozy and spacious kitchen with plenty of space for cooking (the head of the family is an enthusiastic cook) and storage systems. The door to the tambour was laid halfway, turning the top part of the window over the sink: washing dishes is much more pleasant, admiring the scenery than looking at the wall. 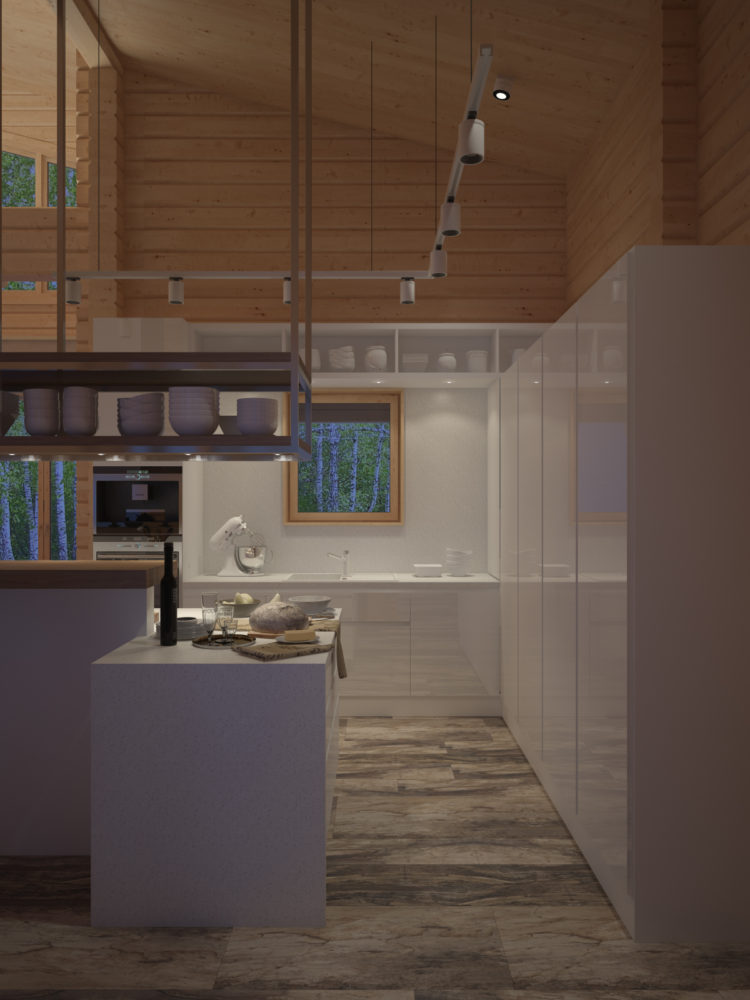 Since the large kitchen was one of the mainwishes of customers, such a redevelopment made it possible to make their dream come true. An island with a working area of ​​4.5 meters was installed in the center, and a long bar counter with a natural wood worktop allows the owners to simultaneously cook and communicate with guests who can comfortably sit next to them. For convenience, the kitchen was equipped. And since the owners are hospitable people and like to arrange feasts not only inside the house, but also outside it, the designers have provided for a direct exit from the kitchen to the terrace. The next stage of redevelopment was the zoneliving-dining room. The TV was transferred to another wall, and in place of the sofa group, a dining area with a large folding table was organized. Also cut through the window and the door - it turned out a very bright and spacious room, where comfortably can accommodate a company of 12-14 people. After cardinal changes in the internalThe design of the house finally found a place for the long-awaited island fireplace. Installed it in the center - so that you can enjoy fire from any point: and sitting on the couch, and dining at the table, and working in the kitchen. The fireplace is completely custom-built, according toan individual project for this house: the base is made of concrete, and a chimney with a height of 4 m hides an openwork grille made in the laser cutting technique for metal. Many can be confused by the open fire in the wooden house, but in the development of the fireplace took part professional stove, which helped him correctly and safely design it. The necessary number of dampers and a base were disguised with firewood, and in the zone of 1.5 m from the fire there are only chamotte, tiles and concrete. Raisa Malyarenko, designer:- I have long wanted to work with large and rough stone surfaces in the interior, and this project provided me with such an opportunity. Since wood and stone interact very well with each other, we used the contrast of regular, even and smooth parallel lines of the timber and with the rough, uneven surfaces of mountain stone, specially brought for this project from Altai. Thin black graphic metal shelves seem fragile against the background of the stone, although in fact these are fasteners.