Modern people no longer want to live in homes,Similar to boxes. After all, the exterior of the house is his "face". We picked up the 10 most unusual house designs, the facades of which will turn your view on architecture. We used to say that the interior of the house reflects the inner world of its inhabitants. But to get an idea of ​​the characters and tastes of the owners of residential buildings, which we will show you today, you do not need to go inside. It is enough just to look at the unique architectural features and futuristic forms of structures that these people call their homes. To begin with, we will move to the near abroad. This unique house with a S-shaped facade was created by the Kiev company KO + KO architects. In addition to the original shape, an unusual combination of building materials also attracts interest: the wooden frame of the structure is protected by a curved concrete slab. 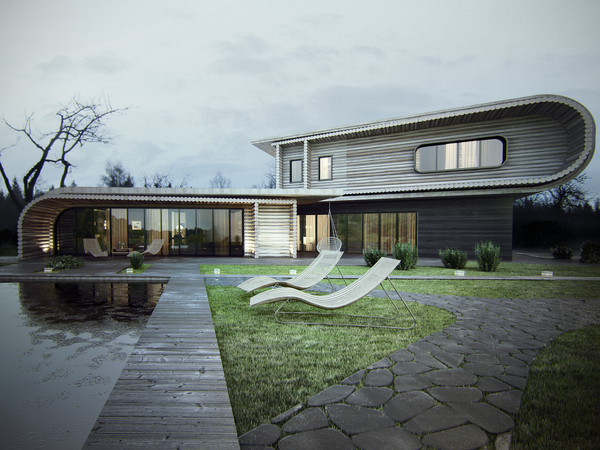 The next masterpiece of modern architecture we foundin Portugal. The creation of this fun asymmetric design of the architect Bernardo Rodriguez (Bernardo Rodrigues) took an entire 8 years. But the result surpassed expectations not only of customers, but of the master himself. The main idea of ​​the architect was to hide the residential part of the house from the wind and the weather behind a powerful wall. 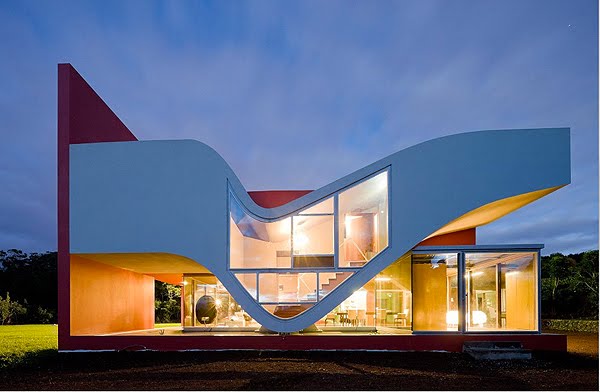 While working on the construction of the next houseHis architect - Australian Charles Ryan McBride (Charles Ryan McBride) clearly was hovering in the clouds. In the bizarre outlines of the facade, the form of the cloud that can be seen in children's drawings is unmistakably guessed. The bright blue pool in front of the house strengthens unearthly associations. 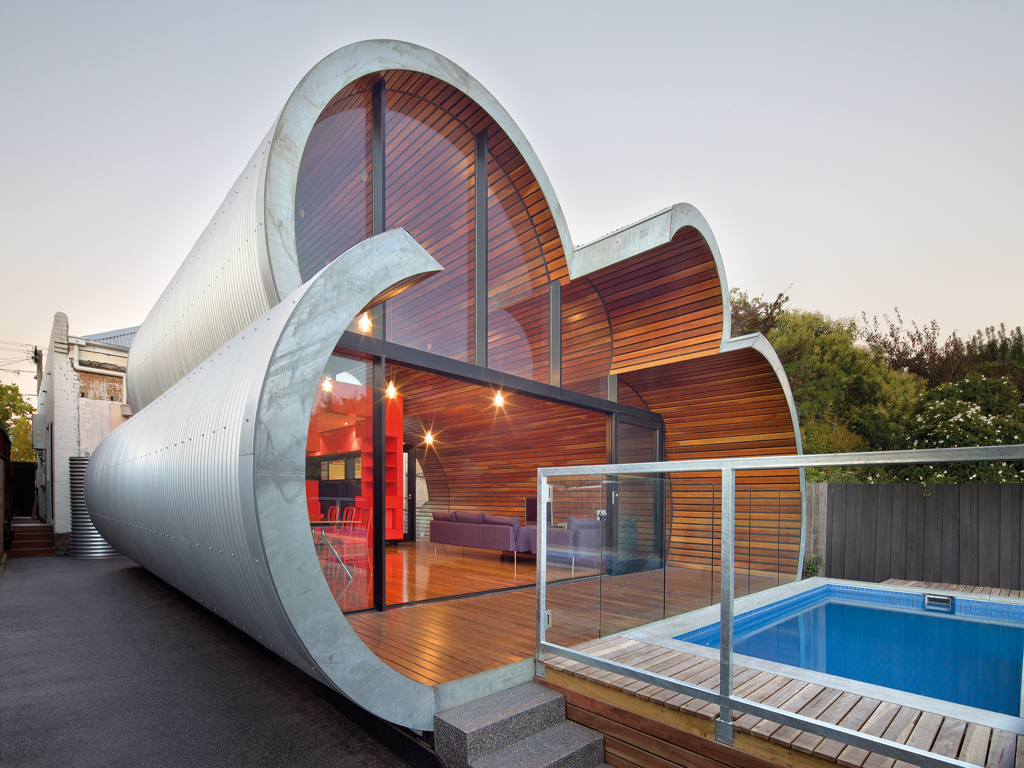 And this house, located in the Tver region,Belongs to the family of architect Peter Kostelov, who is the author of such an unusual design. The original variations on the theme of Soviet country houses, expressed in various ways of finishing the facade with a tree, led to the creation of an amazing visual effect. It seems that the house is not built, but literally woven from a lot of wooden rags. Another private house-owner of spectacular facadesIs located in the suburbs of Berlin. The company Pott Architects used for its finishing painted copper sheets. An interesting fact: despite the somewhat gloomy appearance of the building, it was called "a house that looks like a holiday." A distinctive feature of the facades of the house that receivedThe name Maison Go, is the absence of right angles. Thanks to this non-standard architectural solution, it seems that every next floor slides off the roof of the previous one. The original idea belongs to the French company Architectes Peripheriques. The original approach of the Belgian architecturalStudio Bassam El Okeily to the design of the facade completely changed the appearance of not only one particular house, but the entire street. A transparent wall with a multicolored backlight combined with a well-thought-out interior layout demonstrates the spectacular and mesmerizing play of shadows to passers-by and also takes an active part in lighting the quarter. But the modern version of the dugout. This house literally hid in a hill, dividing it into two parts. Creating such an unusual design, the architectural studio Bercy Chen Studio (USA) pursued not only creative, but also practical goals. The fact is that such an earth frame "warms" the house and provides the thermal comfort of its inhabitants. The next house sends you greetings from the sunnyCalifornia. This original "dancing" building is one of the favorite creations of architect Fred Herring from Herring & Worley, Inc. The house, built for the joy of its inhabitants and occasional passers-by, boasts not only intricate facades, but also a harmonious tandem with the surrounding nature. Beautiful wooden decoration and curved shapes create subtle, but still effective associations with tree trunks. Completes the top ten leaders of the notoriousConsole house from the design studio G.Natkevicius & Partners (Lithuania). Due to the long elongated part, under which there is a garage for cars, the house resembles a huge van on wheels, in it its inhabitants seem to travel around the country. The viewers have a feeling that the construction is not static, and the hosts at any time can gather and move to a new location. 27 real and original houses, which was created by Brad Pitt

The 5 most technologically advanced houses in 2014