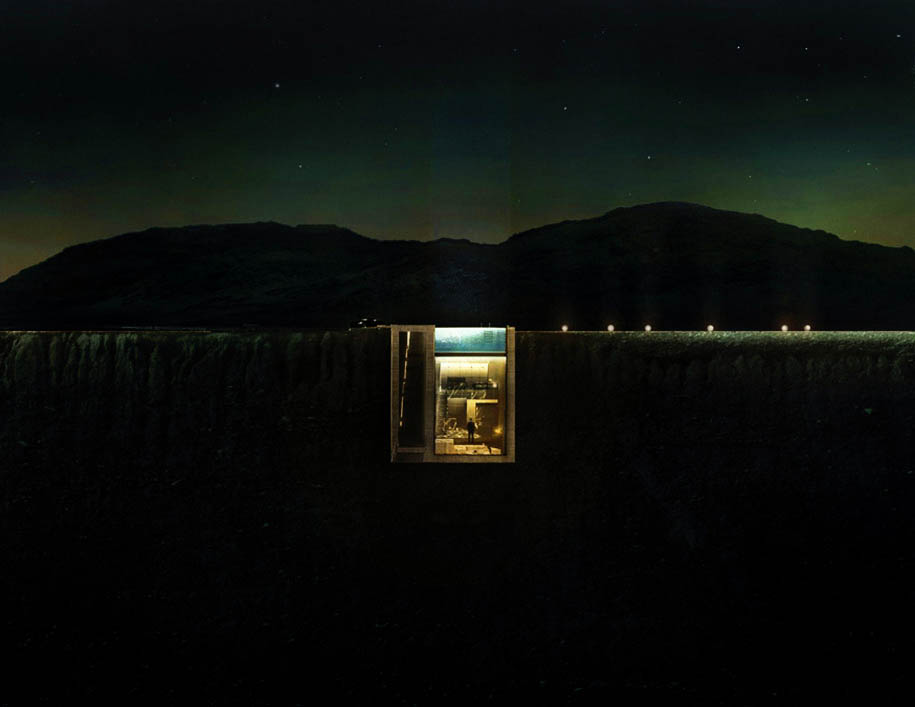 Lyrical brutality. The maximum minimalism. This futuristic residence with a swimming pool on the roof may never become a reality. But there will not be a simple set of beautiful 3D-pictures either. The digital manifesto of the new generation of architects - how do they see our future?

Never thought about living in harmony withnature? About a secluded house on a rocky shore away from prying eyes and human vanity? Or maybe you are a fan of glass and concrete? Ecologists, misanthropes and lovers of the utmost brevity, you have like-minded people. They are originally from Greece and work at OPA Works studio (Open Platform for Architecture). Pantelis Kamparopoulos and Laertis Antonios Vassilou, Open Platform for Architercture Open Platform for Architecture (OPA) is two Greek architects in their early 30s, Laertis Antonios Vassilou and Pantelis Camparopoulos. Both are graduates of respected Greek universities, the Higher Technological Institute in Patras and the Athens Technical University, scholarships of no less respectable European academies. By their age, which is not serious for Greek specialists, they are participants in quite serious projects both in Greece and abroad, laureates of prizes and competitions. Both grew up on the coast of Rhodes, and therefore the Aegean waters, furrowed by the cunning Odysseus, are perceived epic. “To combine functional architecture with respect for nature, which has protected humanity for centuries, with the help of fresh new ideas” - this is how the architects formulate the main goal of OPA, created by them in 2014. opaworks.com 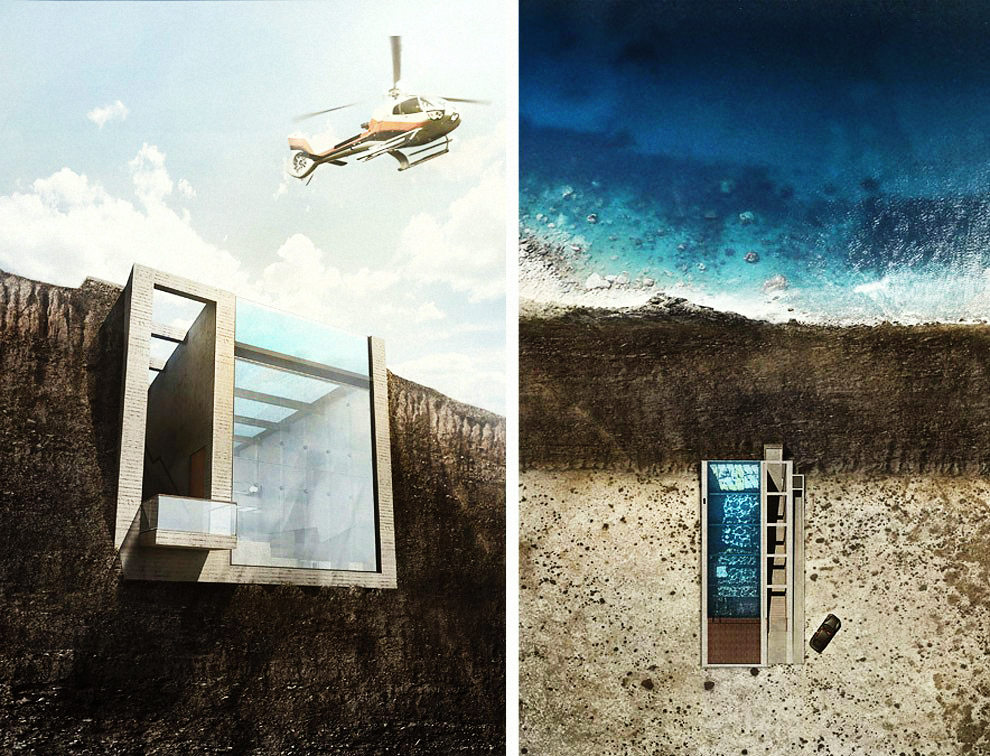 Literally ingrained in the rock Casa Brutale- "The house is brutal" not only aesthetically, but also quite financially. It should be built of three slabs of so-called unprocessed concrete - beton brut in French. Hence the name. But the idea underlying the project is more romantic, though with a rebellious bias. 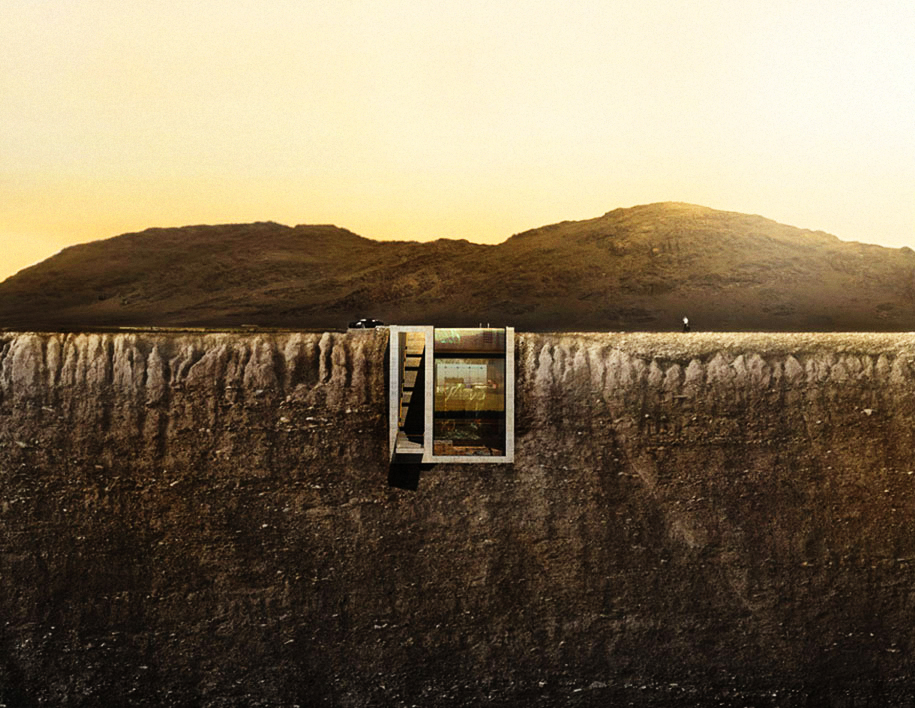 OPA Works Studio:- This is a translation of a landscape into the language of geometry, a direct statement about the simplicity and harmony of modern innovative architecture, about its unused opportunities. We have conceived a chameleon space that should be created both for loyal service to its owner and for a life in respect of the environment. And it is also an inverted reference to another house we love - Casa Malaparte. opaworks.com 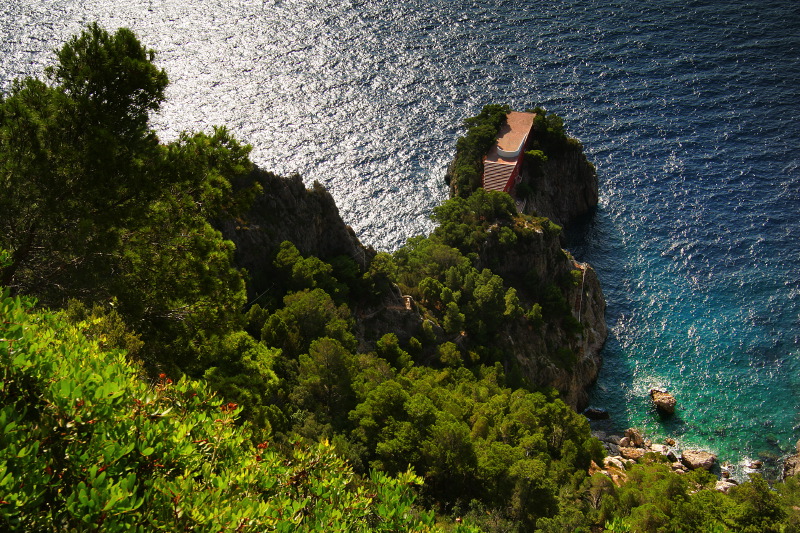 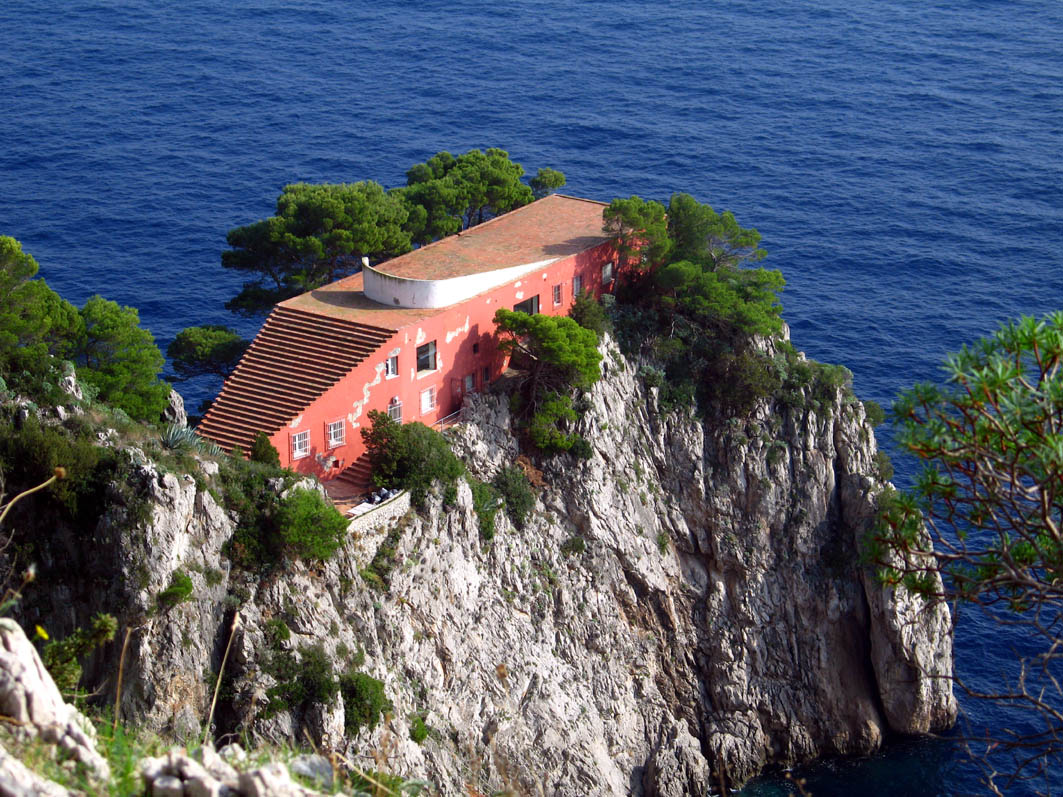 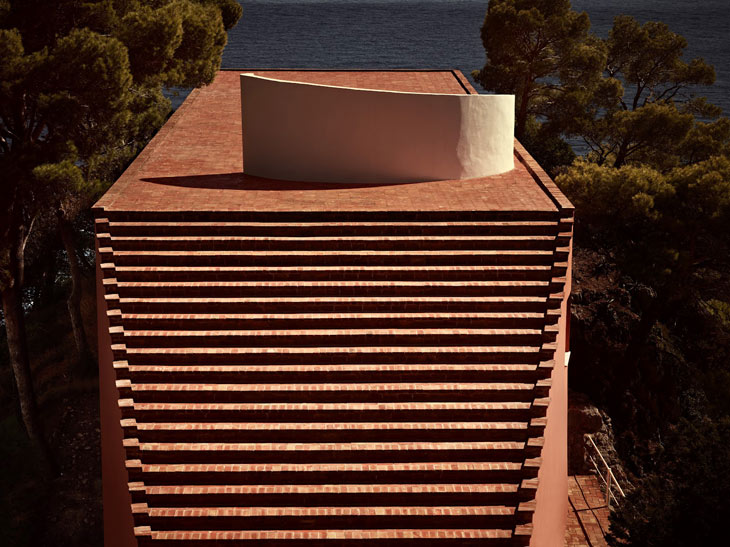 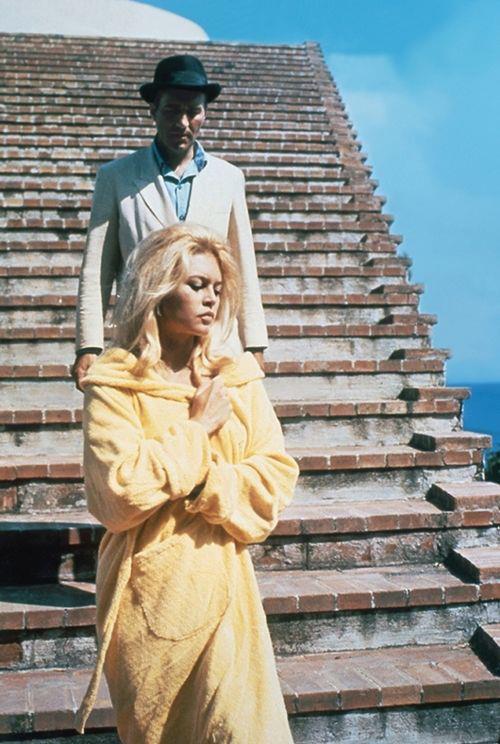 Villa Malaparte, designed in the late 30'sknown rationalist Adalberto Libera, and to this day looks from a 32-meter cliff on the island of Capri to the Salerno Bay. Conceived by the same manifesto as its brutal "younger brother", the villa never did - the journalist and writer Malaparte quarreled with his designer and built the residence already with other people. From Libera remained an unusual for the Mediterranean design with a high wide staircase leading to the site for sunbathing. In the late 60's Godard shot on her Brigitte Bardot in the film "Contempt". 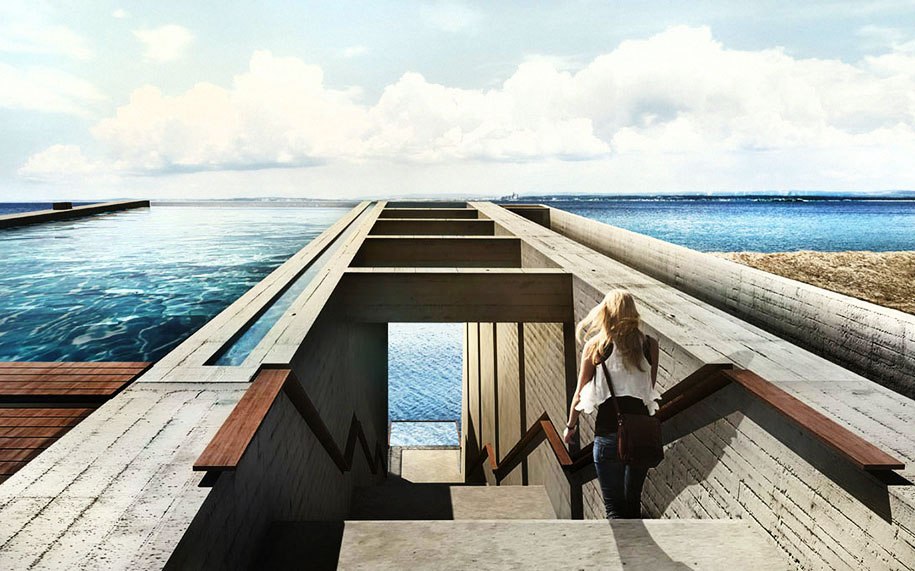 In contrast to Villa Malaparte, the staircase CasaBrutale - 50 concrete steps - does not lead up, but down. The building is completely recessed into the cliff to prevent the view from enjoying the endless landscape. Rock, the sea and the endless blue of the southern sky. 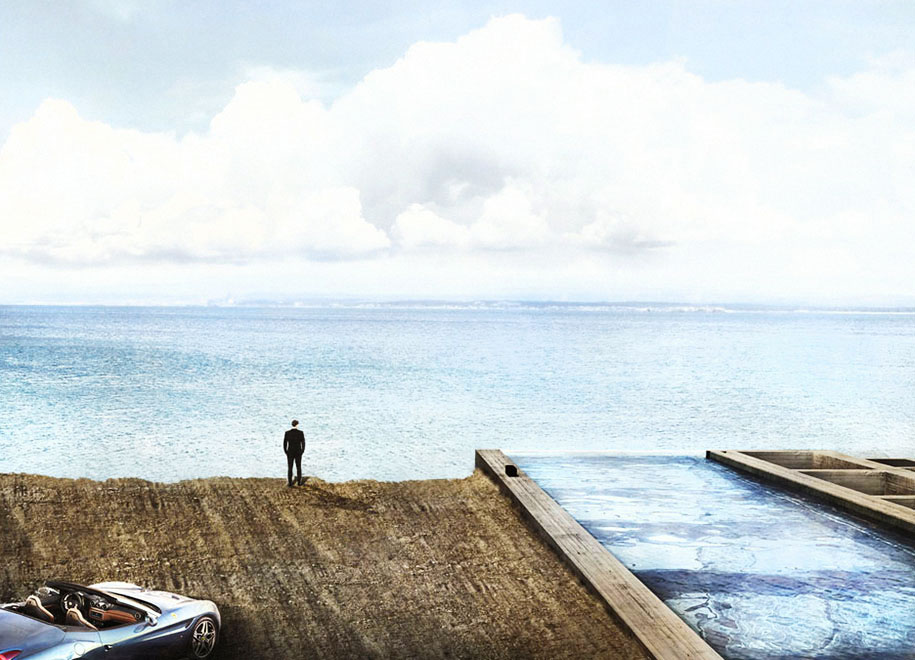 Instead of a roof - a transparent pool ofreinforced glass, it softens the stiffness of the main material and lets a lot of light. Refracted by water, this light creates fantastic pictures on the walls and ceiling - a continuation of the poetics of the Aegean Sea. Casa Brutale impresses with its primitive elegance. 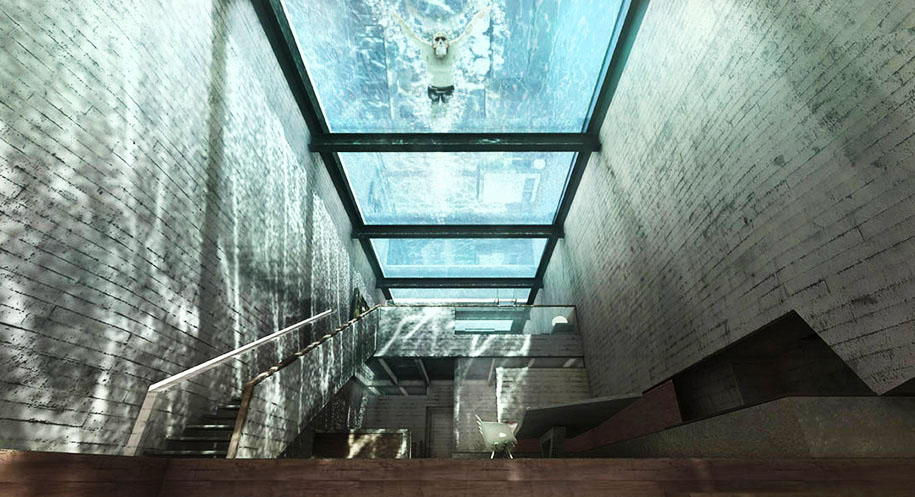 OPA Works studio:- We tried to use the simplest materials: wood, glass and concrete. This place is the convergence point of land and water. On the one hand, these elements dominate the design aesthetically. On the other hand, our home benefits from them through a thermoregulatory mechanism from the surrounding land and the cooling effect of the rooftop pool. opaworks.com 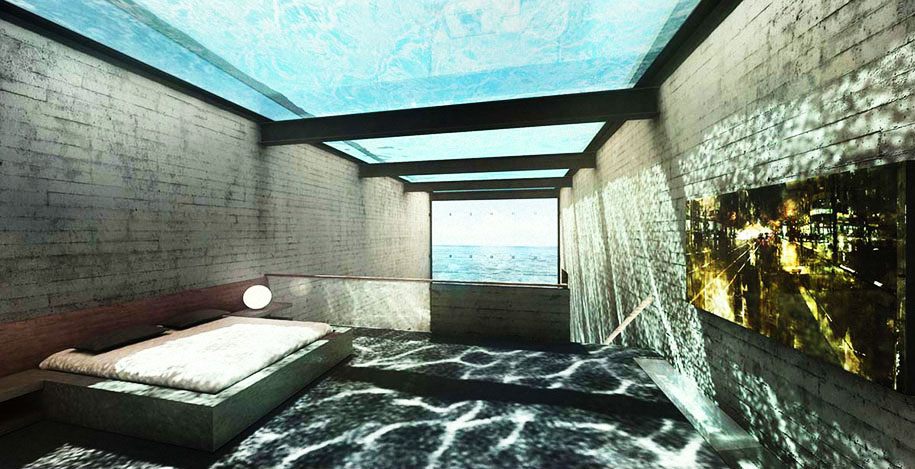 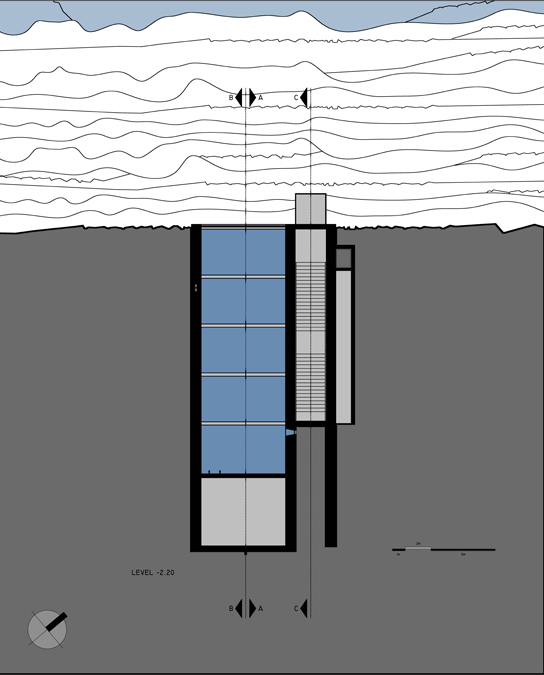 Through the high rotating door of the agedtree visitor enters immediately into the open space with a fantastic panorama of the Aegean Sea. With such a wealth of natural scenery, any tricks with decoration are redundant. Inside, minimalism is uncompromising and exclusive. The dining table cast from concrete is combined with concrete benches covered with a warm brown-red tree. 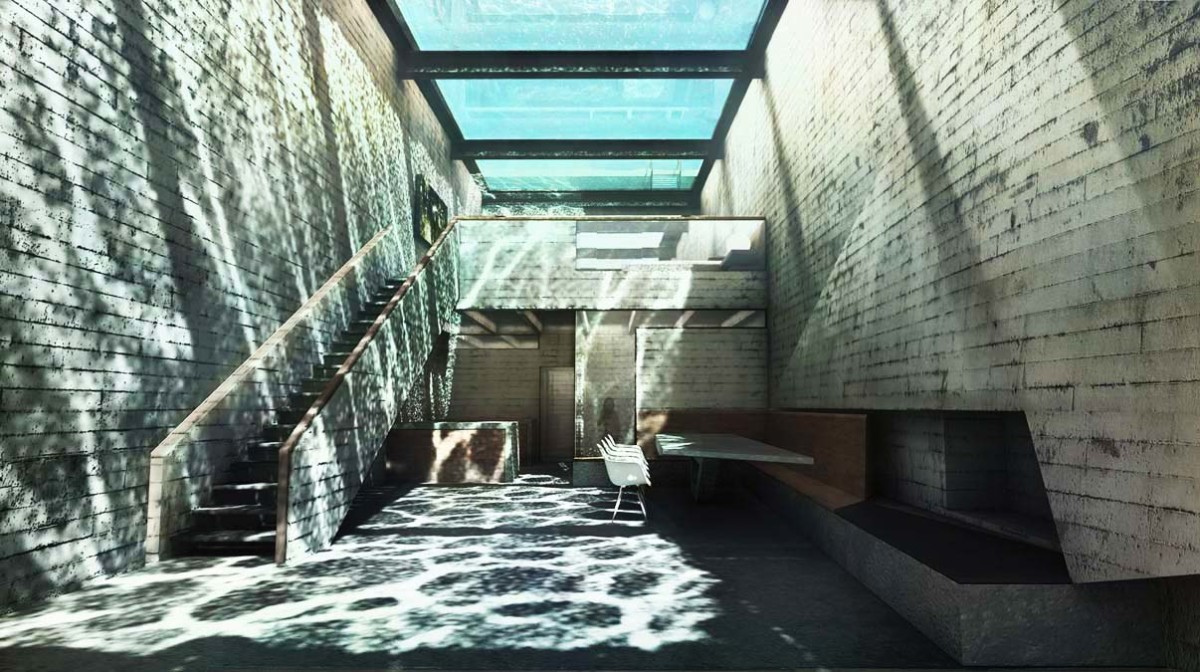 Next to the benches is a soft bend of the fireplace. Behind the table is a modest guest room with a glass corner. Between it and the stove is a small passage to the utility rooms: bathroom, toilet and dressing room. The internal staircase consists of thin steel steps, which swing the visual bridge from the kitchen to the glass facade and further, to the horizon line. 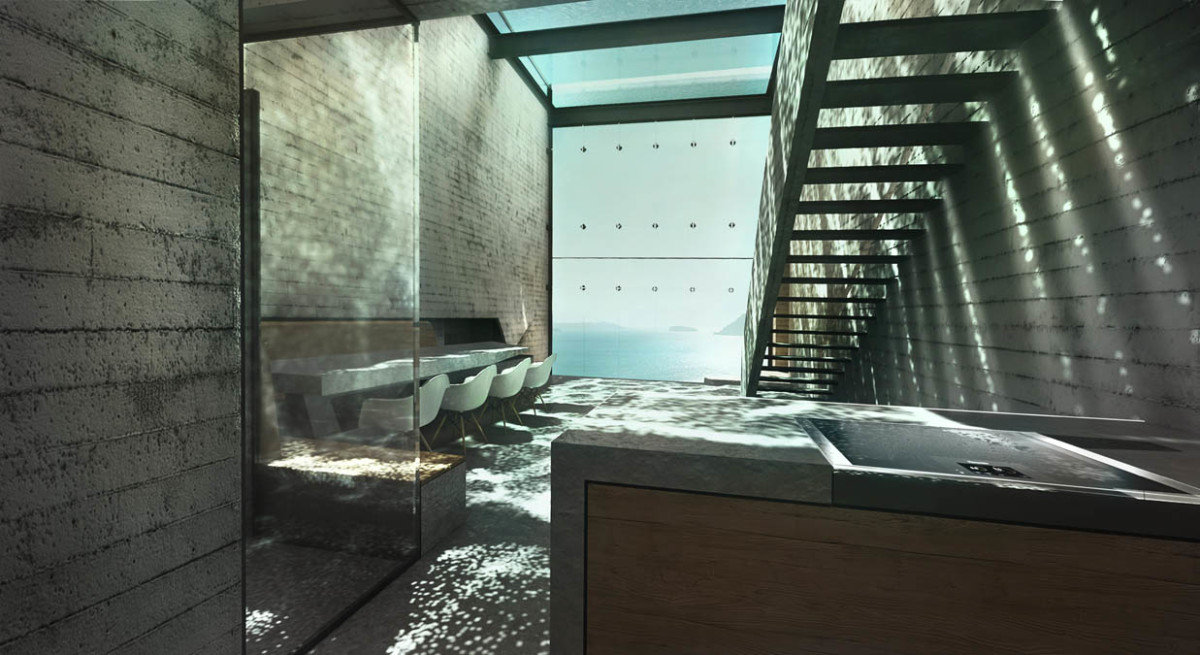 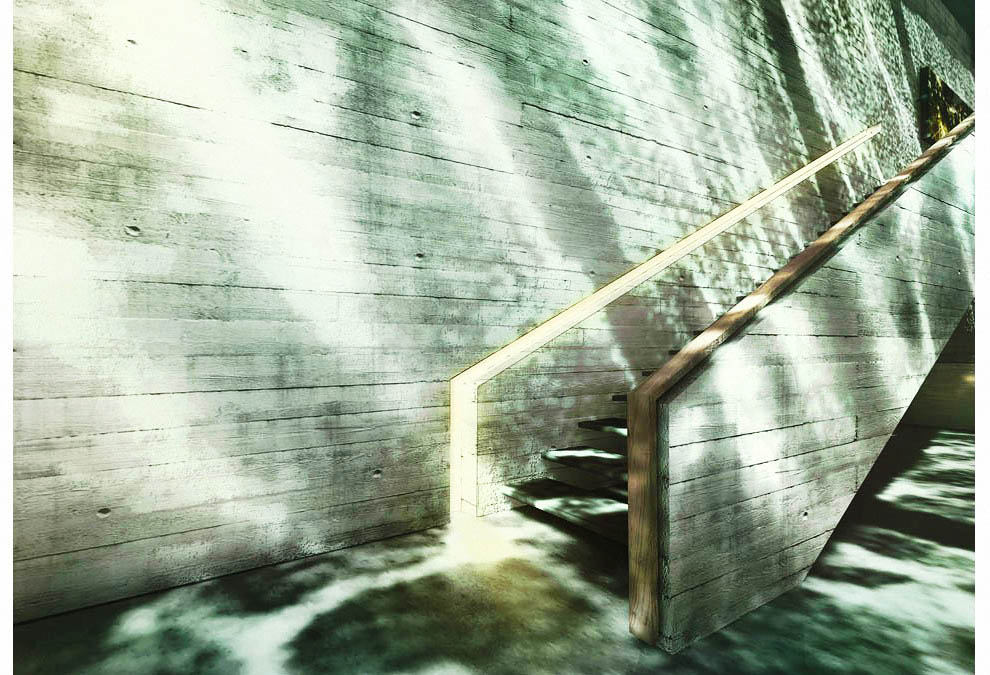 This staircase leads to the master bedroom. The concrete bed is covered with wood, and one of the walls - with mirrored panels, to enhance the impression of the game of sun glare. Finish the composition of rare details of steel and wood. The only decor that OPA allowed itself was a mean drawing on a concrete slab, squeezed out by a board. 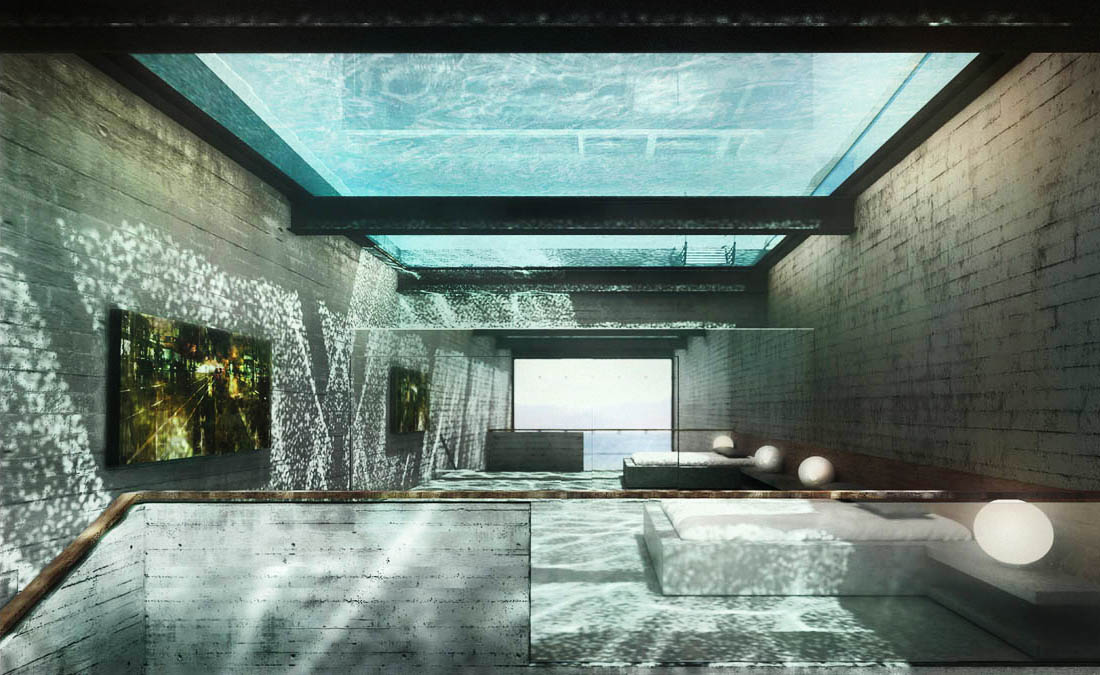 Dedication to the simplicity and grandeur of nature - socall their project young architects. Technically, it is completely incarnate: all calculations and drawings have an OPA. Is there a new Malaparte who wants to breathe life into them? Unknown. Anyway, the concept itself has become a source of inspiration for the colleagues of these young Greeks from around the world who are quick to comment on it on the web and are interested in details.