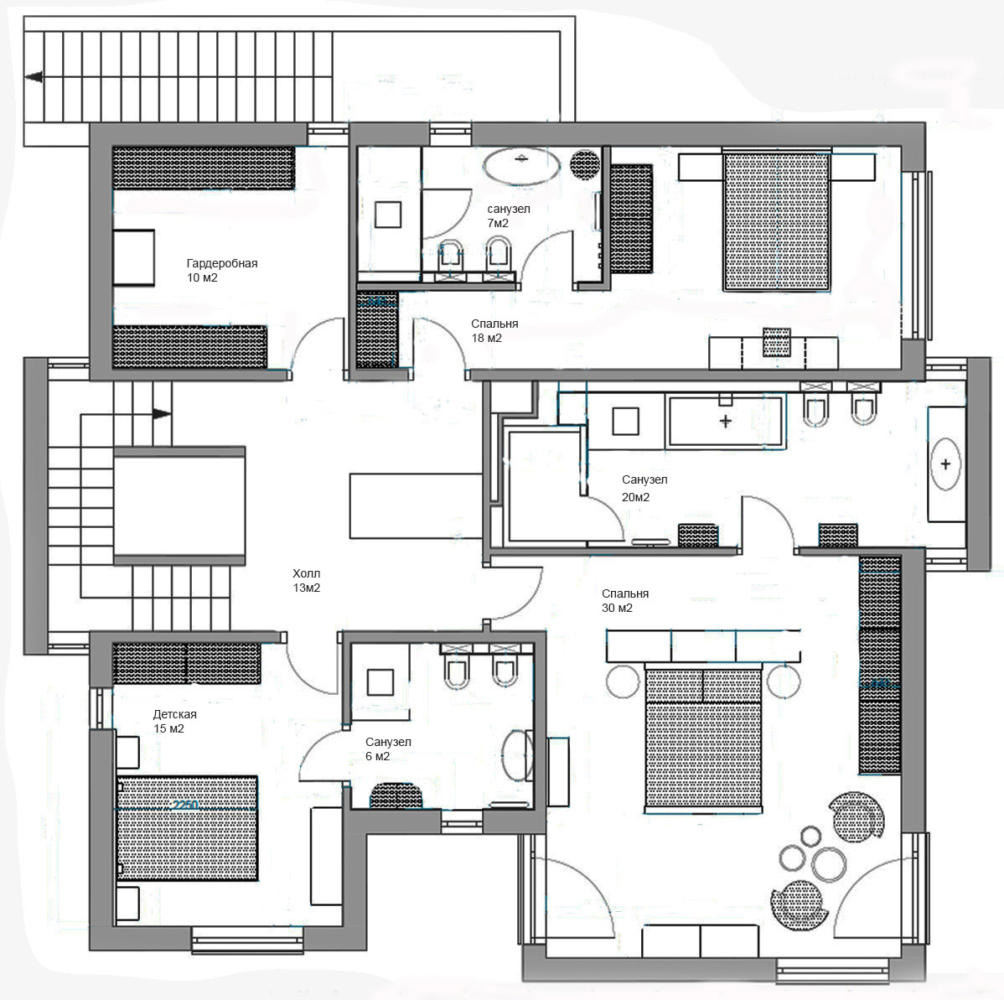 What to do if you live far from your homeland, butDo you want to have something nearby that reminds you of your homeland? We invite you to get acquainted with the house in Frankfurt, where the external minimalism hides the true Russian spirit

In the village of Kronberg, located underFrankfurt, mostly live bank employees. All developers must adhere to the general exterior of buildings, which is clearly regulated. The concept of houses in style resembles a bauhaus, so in architecture a fairly simple and logical plan can be traced.

The facade of the building was handled by a German bureau, andthe customer entrusted the interior to a compatriot - Elena Gordina. Lena Gordin, architect Graduated from the Moscow Architectural Institute in 1993, faculty of residential and public buildings. He has been managing projects since 1999. From 2005 to 2008 she studied in graduate school, has scientific works on the topic "Principles of development of high-comfort housing", "Functioning of atrium spaces in high-rise buildings." The architectural bureau of Lena Gordina specializes in modern style, which presupposes, first of all, modern solutions in the field of engineering as the most important factors in creating a favorable microclimate in a house or apartment. In the field of lighting, a modern approach makes it possible to create a comfortable and aesthetically pleasing living environment. lenagordina.ru/

Naturally, the conciseness of form and restraintColor solutions of the facade affect the interior of the house. The main idea of ​​the project was unity with nature, which penetrates through large panoramic windows, becoming a part of the living space. 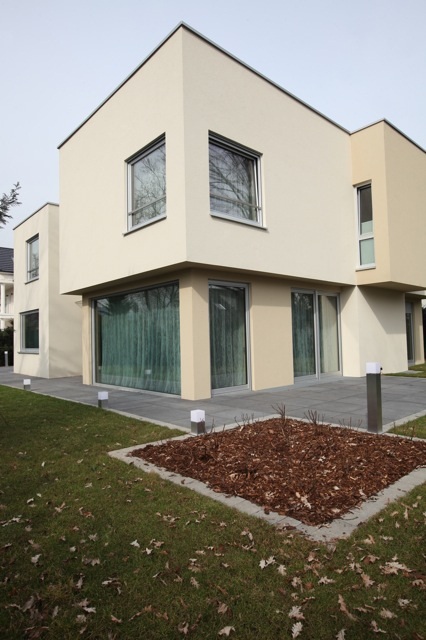 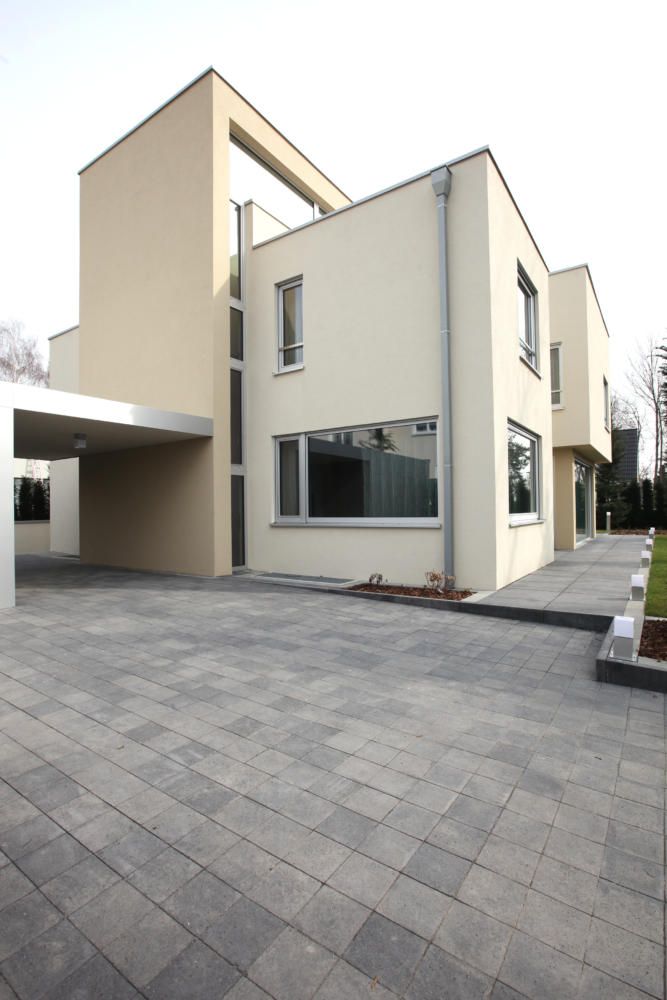 The customer immediately said that he wanted to depart a little from European minimalism and add to the design elements of "Russian luxury".

The first such element was the door fromnatural veneer of a rare breed - maple "Bird's eye". They were made according to the sketches of the author of the project at the German factory Bartels. Doors immediately liked the customer, but since the products of this material have not been produced for more than 15 years, there were difficulties with supplies. And yet the host refused the more "German" option.

The use of rare materials is indeedit is unusual for the Germans to create interiors, and such swinging, bivalve, with double glazing and hidden coloring of the door are what can surprise the neighbors. They decorate the hall, the hall, the living room and the dining room. 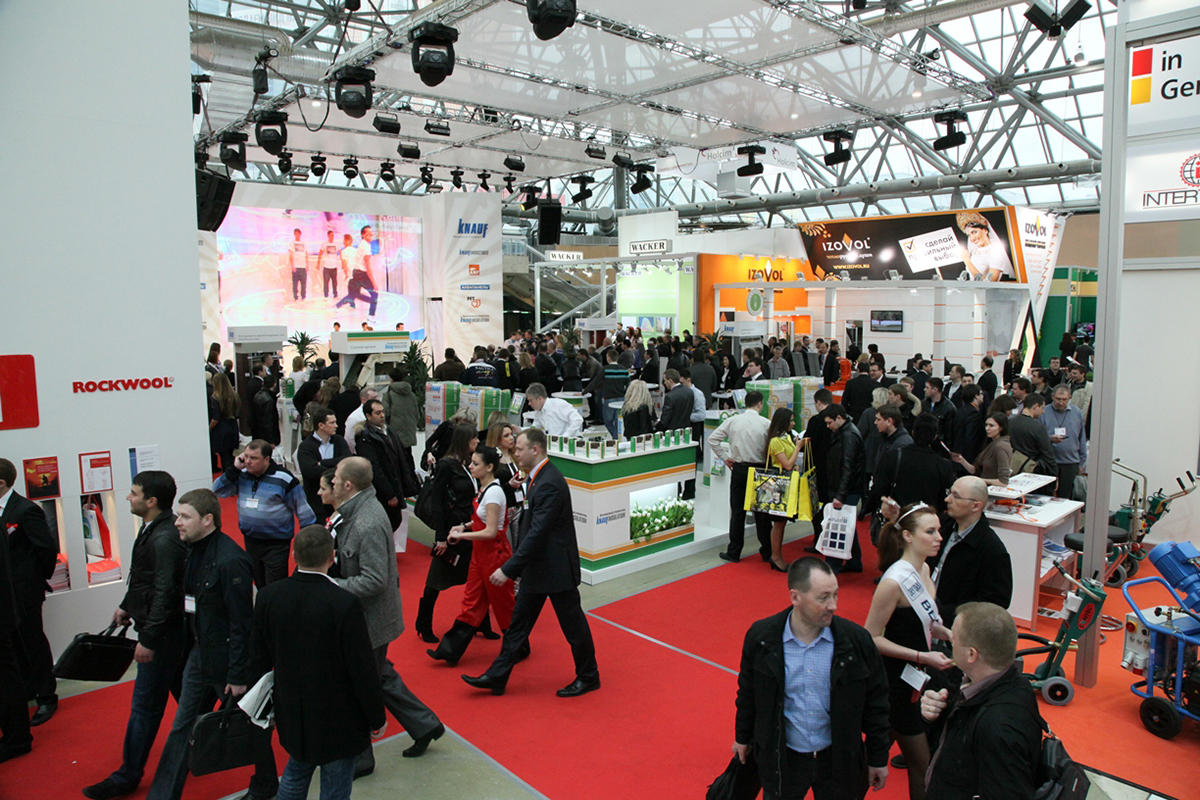 Another prominent element of the living room was thelighting. The huge ceiling chandeliers of Axolight fit perfectly into the interior. Fabric base and nice yellow light create a warm atmosphere in the room. The rest of the living room is quite minimalistic. Simple and strict furniture from Interlubke is used in the sofa group, and two armchairs are located next to the fireplace. The walls are painted with water-based paint, and the flooring is made of tinted Canadian walnut - no frills. 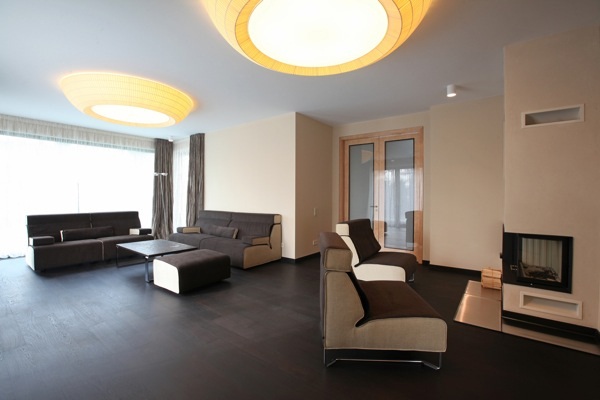 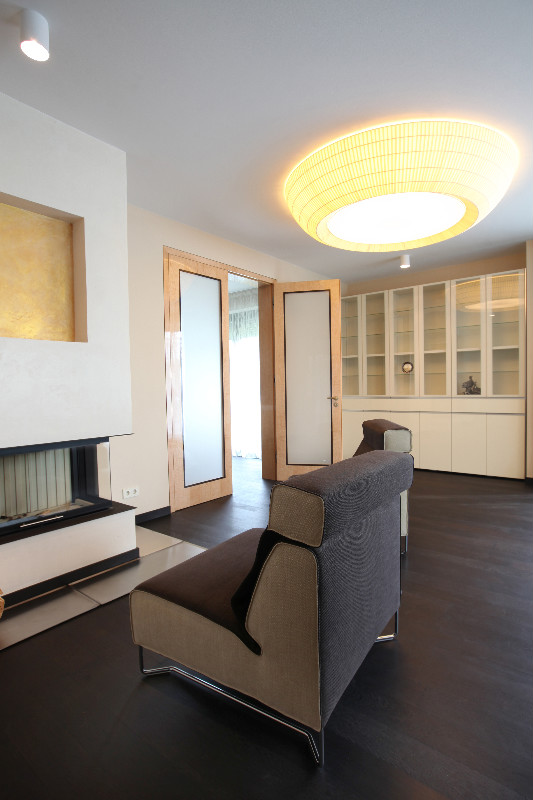 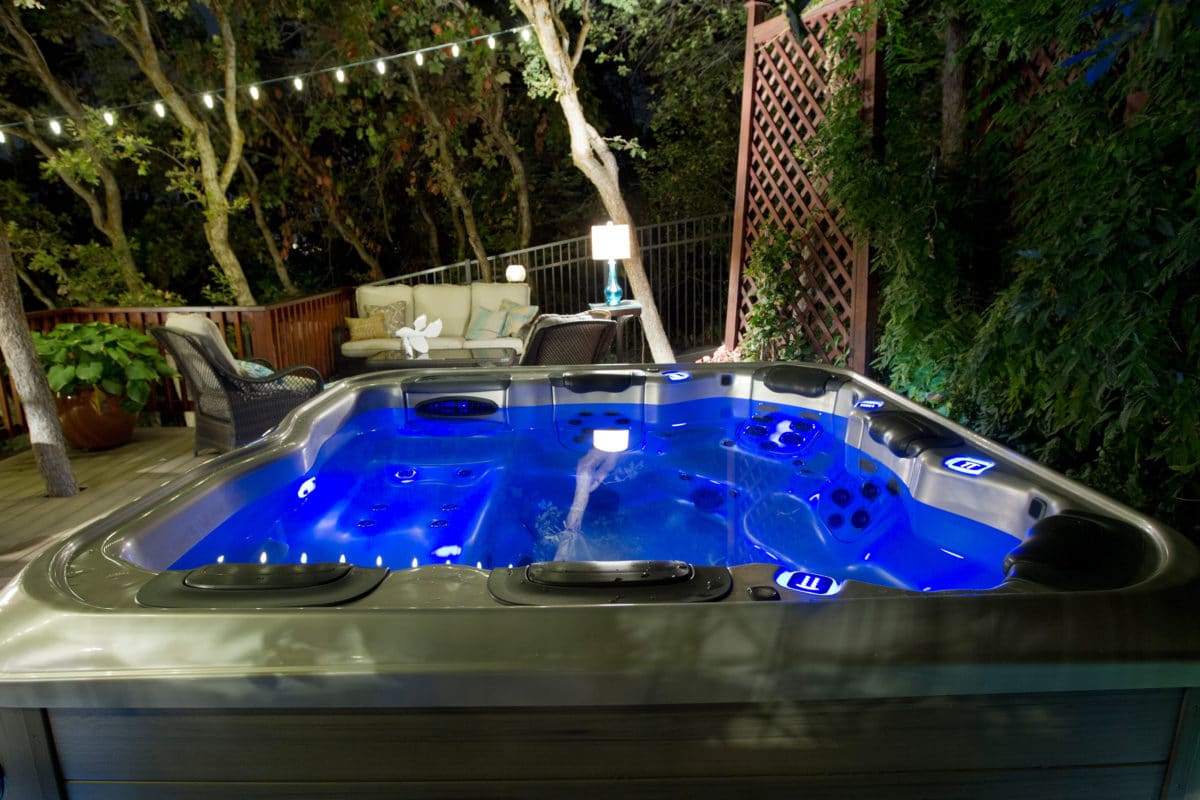 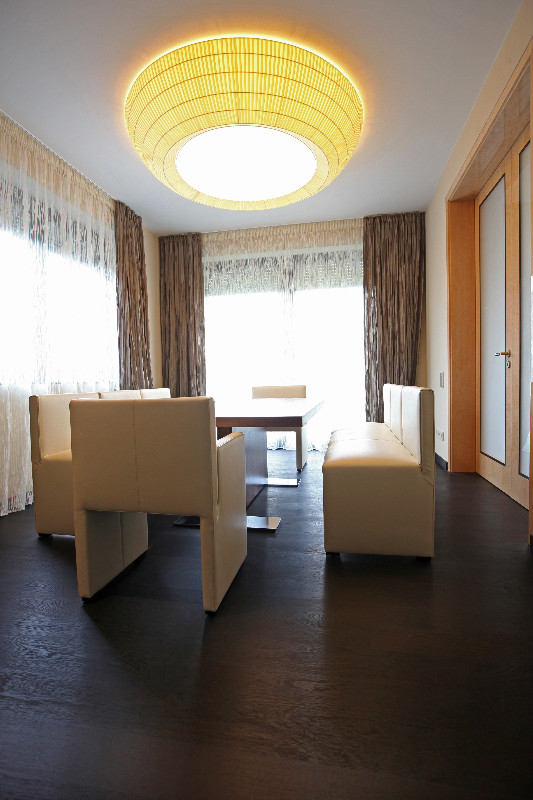 The dining area is in the same room as thekitchen. When planning the kitchen had to affect the exterior of the house - cut the window. Now, natural light is present in the work area, which never hurts. The kitchen itself, represented by Sie Matic, is known for its ergonomic and luxurious minimalism. 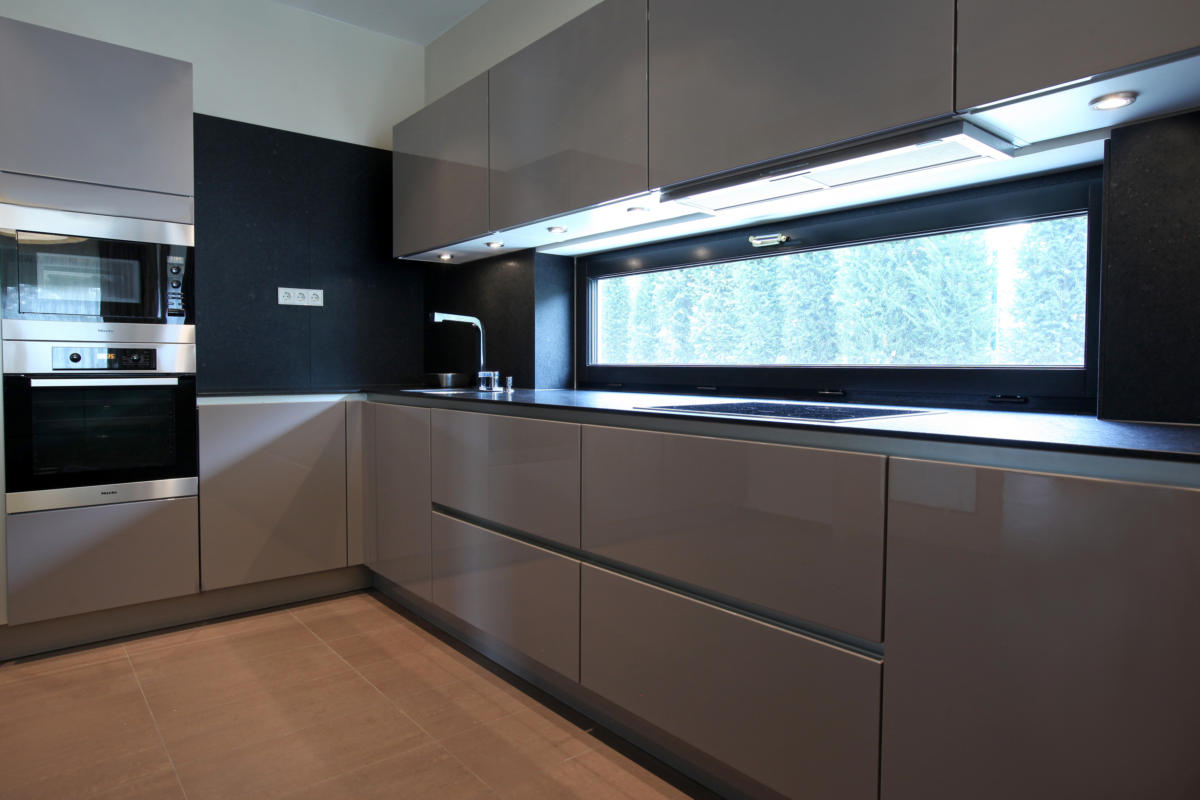 The concept of minimalism continues in the master bedroom. Interior comfort is given by the relief of curtains and interesting form of ceiling chandeliers, illuminated by warm light from the inside. 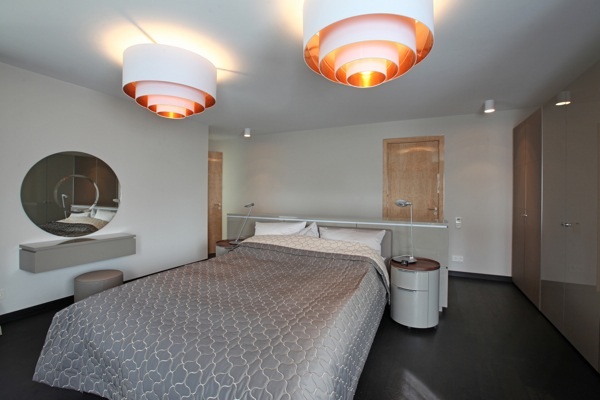 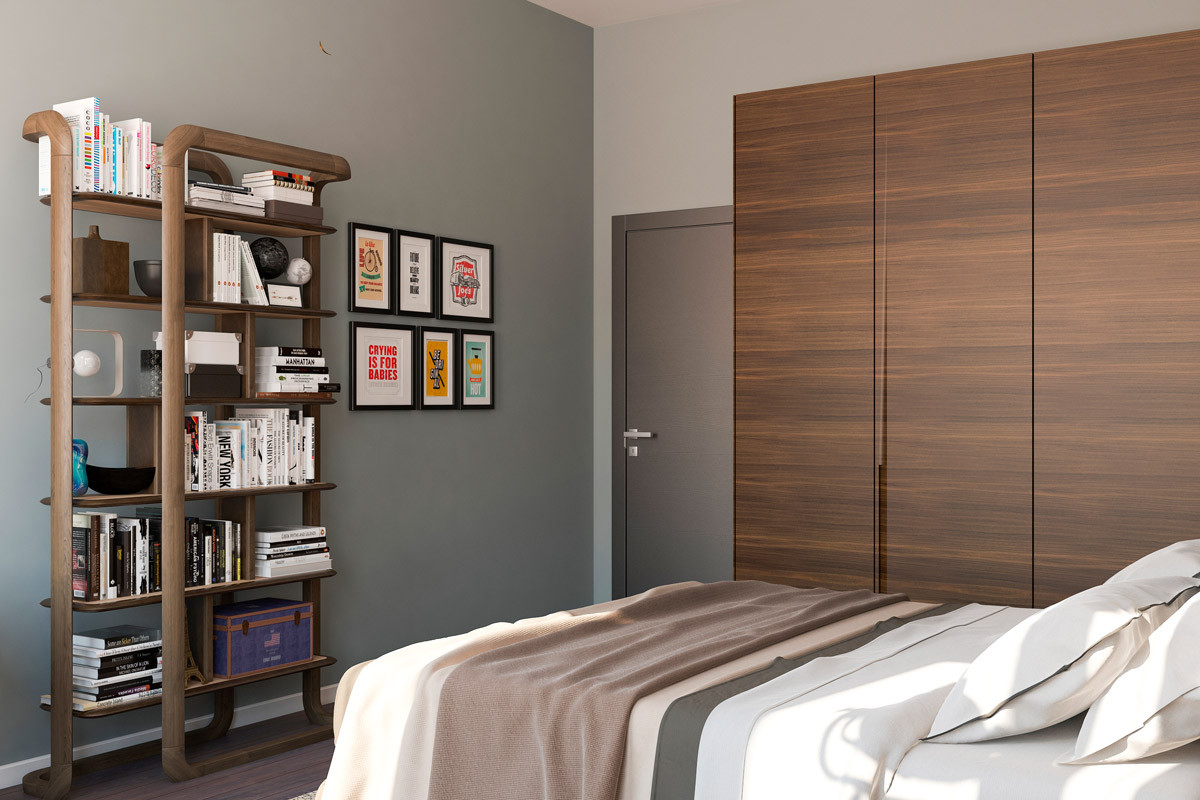 In the corner, next to the windows, there are two elegant futuristic chairs, and between them there is a composition presented at once by three small tables. 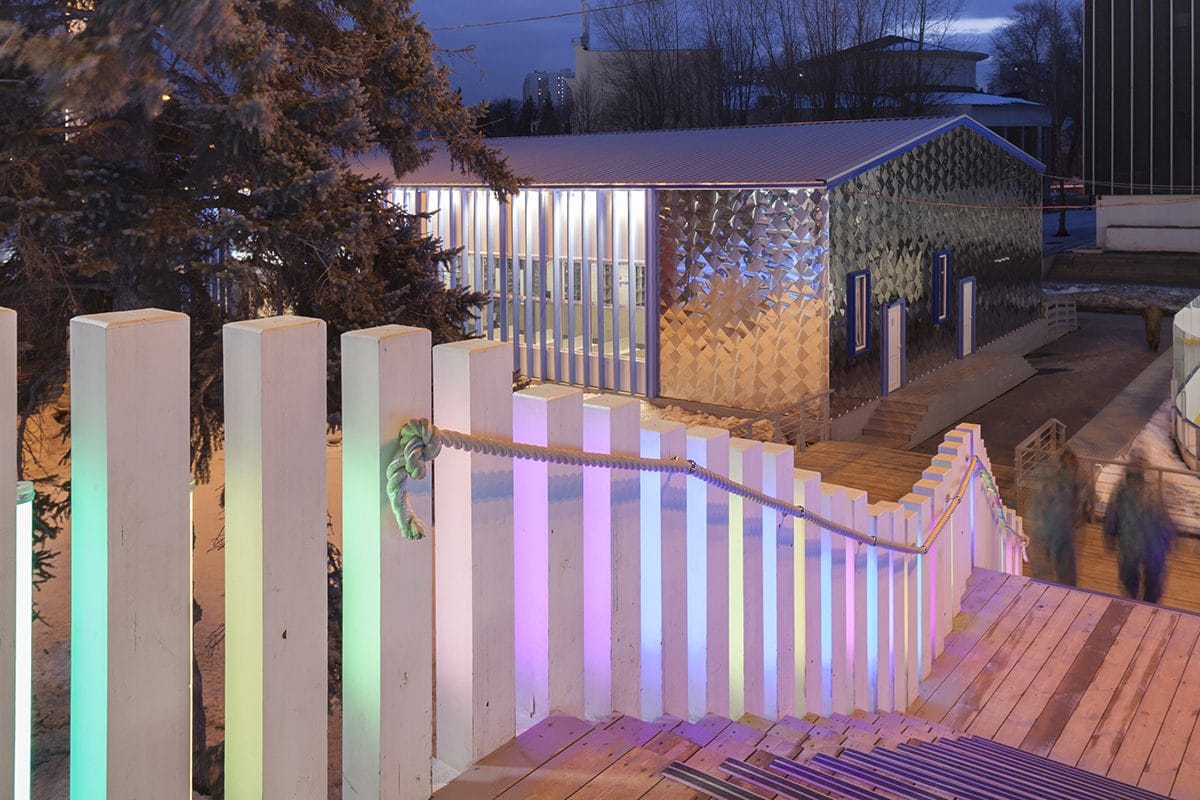 One of the house's bathrooms is of special interest- this is the bathroom of the customer's son. It is noteworthy that the lines are beaten with the iPhone design. All surfaces and lines are rounded in the same way as with a popular smartphone. Even the heated towel reminds the form of the phone, and the chrome plated elements of the Duravit sanitary ware were very welcome. 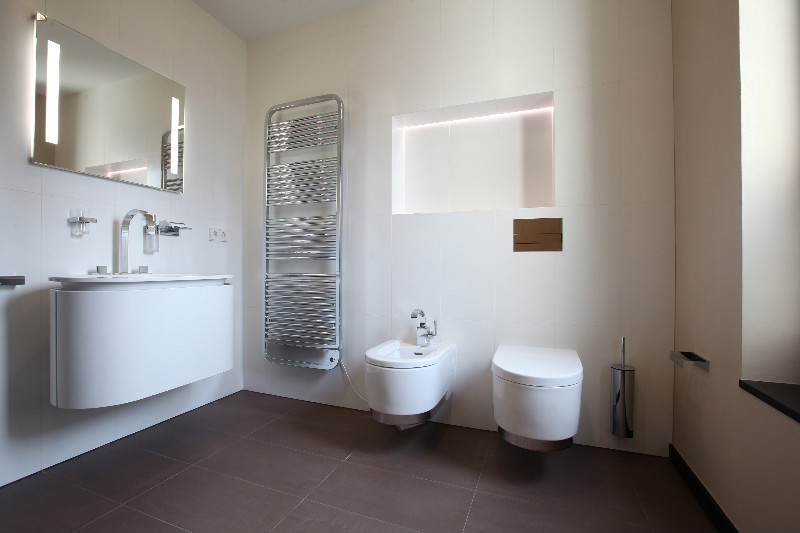 Cooperation of Russian and German colleagueswas fruitful, but, of course, the share of rivalry was present. After the completion of the work the customer admitted that the interior turned out more interesting, which was recognized by German colleagues. Perhaps the role played by the cultural and linguistic identity of Elena and the owner of the house. 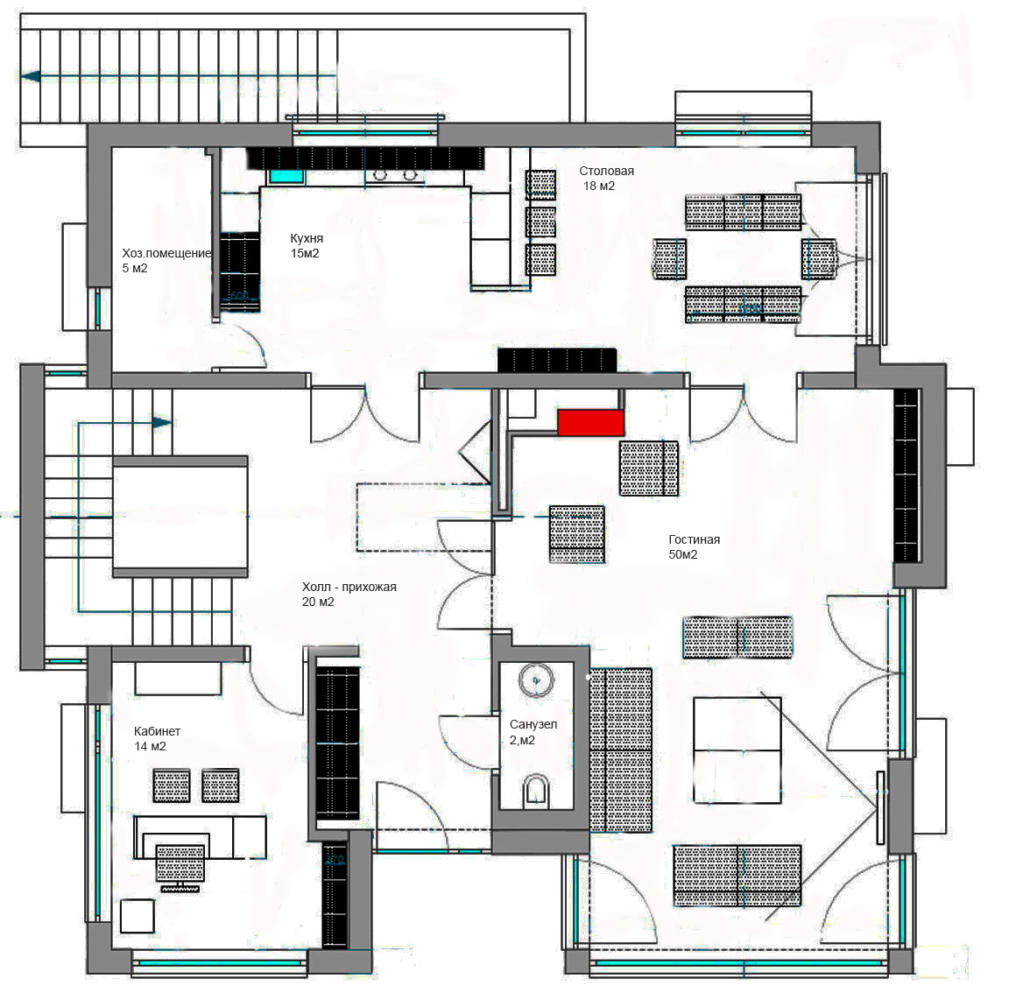