On January 27 we published an article about 5 kitchenTrends that will never get accustomed to in Russia. The article generated many comments. Someone agreed, some did not. We decided to update the article and discuss in detail all the burning issues. Here you see both the old article and the additions to it. All that italics - additions. All that the usual typeface is the old version of the article. People constantly want something, and manufacturers try to meet their needs (increase functionality, add technological innovations, in other words, satisfy even the most sophisticated consumer demand). This is how new trends arise. However, it also happens that the trends themselves appear, but they are not applied everywhere. Why? Now you will tell about it Istvan Tallodi, the top manager of the salon, specializing in the sale of Austrian, Italian, French and. Istvan Tallodi Istvan Tallodi has been engaged in design since 1992. Istvan made his way from the designer to the top manager of the kitchen studio. He received a lot of professional awards and was invited to Miami, where he created the projects of German cuisines ZEYKO and some other elite brands. In 2007, Istvan was invited to the company "Kitchen Interiors", where he works until today. Kitcheninteriors.com Now we will alternately call all five trends and explain them a little, and Istvan Tallodi will explain why it is difficult to get used to these trends in Russia ... Trending No. 1 - rejection of traditional working zones The concept of the traditional kitchen triangle appeared back in 1940 Year, when the kitchens were small, and the technique is very large. To date, the world has a huge amount of built-in equipment, which is located in the kitchen space, not only linearly, but also vertically. Therefore, working kitchen areas change not only their geometry, but also their functional purpose. "All this is a fiction, because the functional content is the main thing, and the division into zones can be anything" (Istvan Tallodi, "Kitchen interiors"). 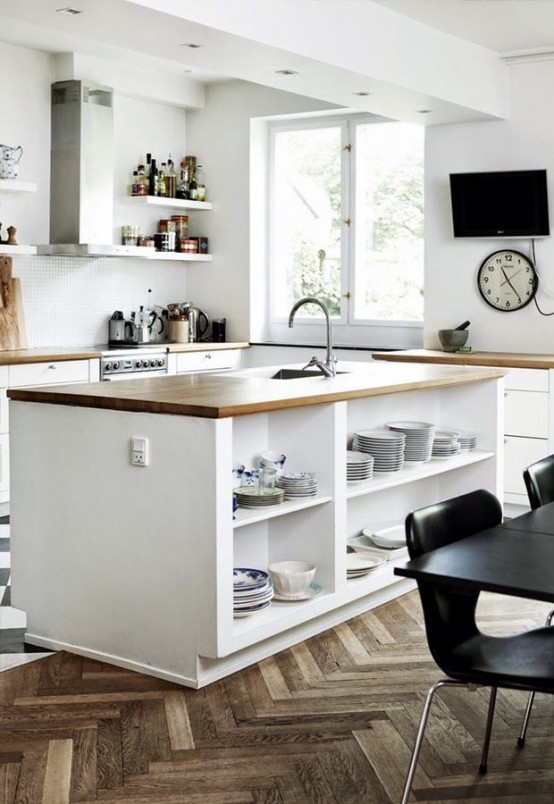 Istvan Tallodi, "Kitchen interiors": - The approach to designing each kitchen should be strictly individual. Today, the possibilities of manufacturers allow not to think in traditional "zones", "triangles", "rhombuses" and so on. But, on the other hand, the form and dimensions of the room are usually already defined, and taking into account the ergonomics, aesthetics and personal priorities of the client, we must find a reasonable compromise, since it is extremely rare for us to build a house around the kitchen furniture. Trend № 2 - separation of refrigeration zones depending on the filling Individual storage of food is one of the prerogatives of the public catering, but now in European houses the tendency to put several refrigerators for different types of products is gaining popularity. What does the guru think about this, read just below ... "Several refrigerators for organizing product zoning ... hmm ... this trend will take hold only in a good Jewish family," István Tallodi joked. István Tallodi, "Kitchen interiors": - Usually consumers do not want a few refrigerators in a row, but in order for each to have a larger volume - that is, their goal is not to divide the products into refrigerators (however it is correct from a professional view), but to provide greater flexibility - a sample of this flexibility shows us the company Fhiaba, offering refrigerators with drawers that can be turned from the refrigerator into a zero zone or into a freezer at the touch of a button. Our opinion: - Of course, there are families in which each generation has its own refrigerator. And there are those who buy refrigerators as the family grows, so as not to buy food every day. But our editorial board likes another option: I bought a wide refrigerator side-by-side from SubZero - and solved all the problems for many years. There to you and zoning of products. And separate air supply to the fridge and freezer. And cleaning the air from ethylene, germs and mold every 20 minutes. Or, as Istvan offers, Fhiaba refrigerators, in which the lower chambers can work in the mode of both refrigerators and freezers. And there is a zone of freshness with zero temperature and much more. Well and the sizes of refrigerators too can be huge. 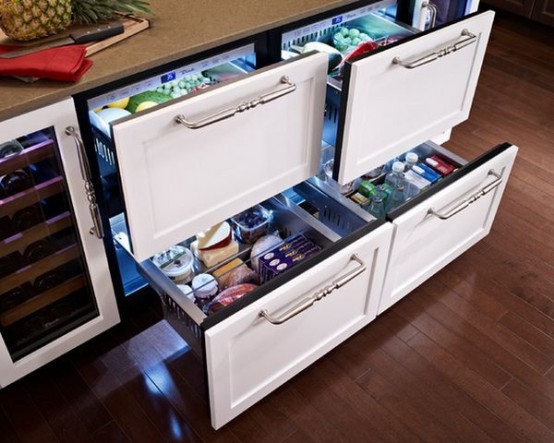 Trend No. 3 - transition to induction furnacesInduction furnaces are the next step in the evolution of kitchen stoves. They do not even have to warm up the hotplate, and there are several cooking programs, and they will not even work without cookware placed on the burner. But what about these wonderful plates of Istvan? "Induction furnaces are a trend announced by manufacturers. Many consumers fear them at all. Because even the dishes when using these plates need a special (one that is magnetized, has non-stick coating). People do not realize what their choice is fraught with, because additional ventilation is also needed, and the electrical load on the wires is very large "(Istvan Tallodi, Kitchen Interiors). The editorial office apologizes to readers and István Tallodi, initially in the article it was said that the dishes "DO NOT magnetize", this, of course, was a typo that all literate people understood adequately. Istvan Tallodi, "Kitchen interiors": - Many are afraid of induction, believing that special utensils are needed for it. In fact, any modern stainless steel cookware is suitable, and there are still pan-adapters for dishes that are unfit for induction (not magnetizable). Also, when choosing induction cookers, it is necessary to take into account the need for additional clearances for ventilation (for ventilation grilles in the kitchen base, and in some cases for the ventilation slot directly under the countertop), and also be prepared for additional noise. Also, customers are sometimes confused by electromagnetic fields under the hob. But in my experience I will say that customers who already use an induction hob will next choose it again, because it's all a matter of habit. Our view: - As the audience of our publication is about half a million readers, and a good half of them live outside of Moscow and the Moscow region, we sincerely believe that while in Russia most of the houses are gasified, the trend with induction plates will not get accustomed to mass. Mike Shilov, interior designer: - I have induction and separate refrigeration zones in each project. And you forgot to say about separate collection of garbage - this is a whole problem. In the European kitchens, up to four garbage containers are built in under the countertop. Russian clients invariably ask to replace them with one big one, and it is sometimes impossible to do it - some factories do not have an alternative option. Here I really feel the difference in approaches and mentality. Inga Azhirey, interior designer: - Induction cookers are good, beautiful, safe and smart. In a family with playful kids, she will definitely be accepted with a bang. We took this panel for two users at the dacha - in case the gas cylinder runs out, they are built into the portable countertop so that you can take out on the veranda. In the summer, when it is necessary to quickly warm up something in the heat - an ideal option. Although I think the gas stove is very cozy, homely. But here the question of the dimensions of the kitchen and the wishes of customers. I was also impressed by the English cast-iron stove-oven AGA, which produces stunning soups and cereals. In general, this stove is for those who like to cook a lot. Otherwise, there is no point in putting it - too expensive. 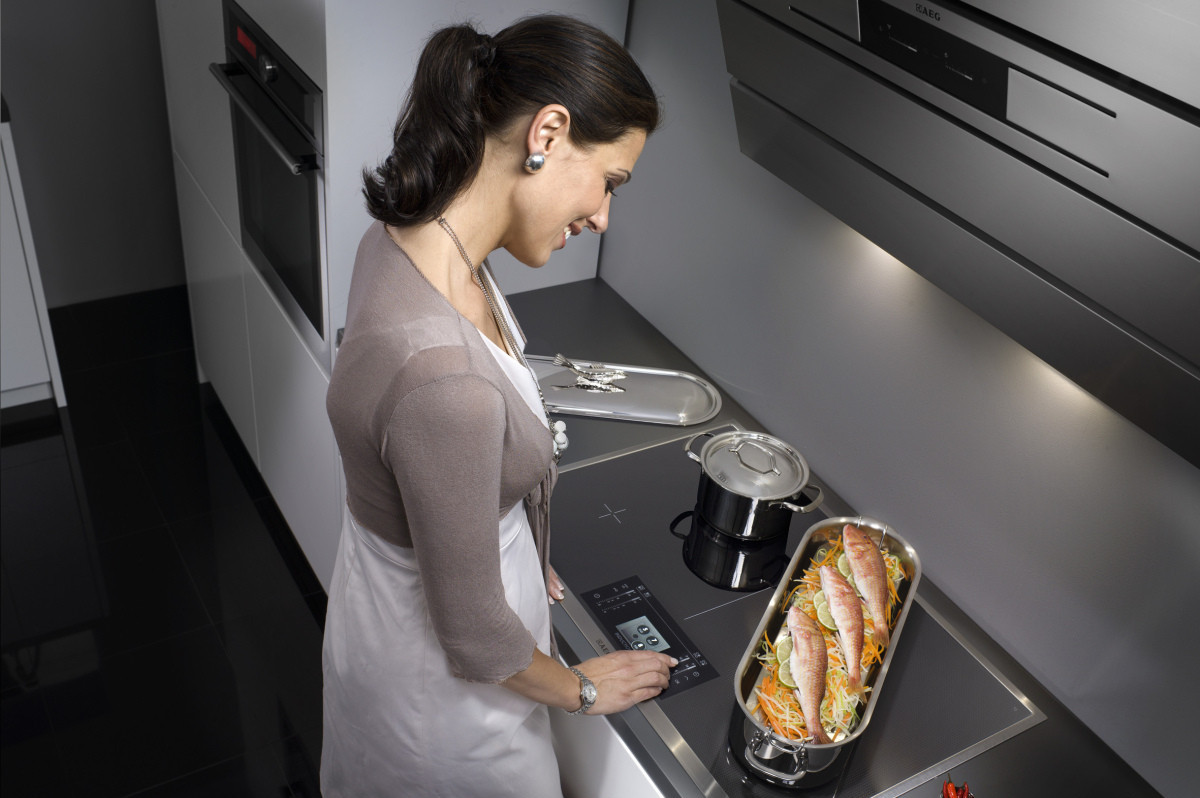 Trend number 4 - the transition in the decoration of kitchens fromStainless steel to graphite coatings A win-win coloristic variant for the kitchen - a coating of graphite shade. They can be either stone-blue or pastel gray. Today, the graphite palette is very popular in finishing European kitchens. "I would not say that graphite is now so popular in finishing kitchens, another thing is quartz. Quartz countertops, for example, are extremely durable and reliable "(Istvan Tallodi). Istvan Tallodi, "Kitchen interiors": - We have kitchens in the salon in dark gray colors, it's really popular. And from materials, concrete, ceramics and imitation of stone become popular. 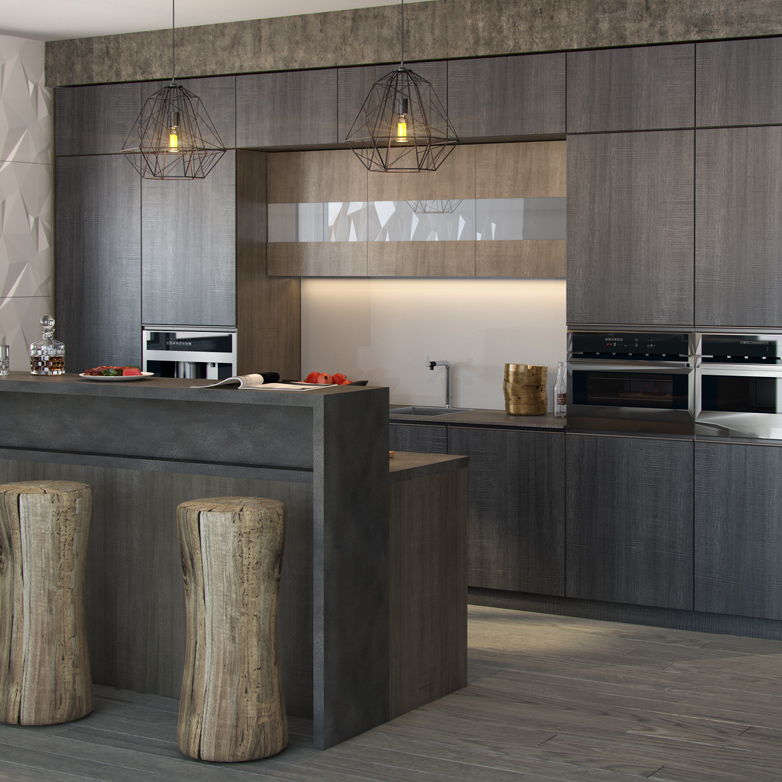 Trend number 5 - Ovens with swing doors(French-door wall ovens) The trend to use ovens with swing doors came from Europe, and now this popularity is experiencing a second wave. After all, as we know, everything new is a long-forgotten old. However, that the European is well - that the Russian person can not satisfy ... "I am convinced that in Russia the ovens with swinging doors will never become a trend. Just because we are not Europe "(Istvan Tallodi). Istvan Tallodi, "Kitchen interiors": - Let's now talk specifically about French door oven: if they were wide, 120-122 cm, it would be better, and even so that the door would open. Opening the door to the left or to the right is also not bad (for a width of 70-75 cm). But opening the doors in two directions seems to me inexpedient.

Sophie Mu, interior designer: - However, as I see, the article was resonant. I, as a practicing designer, observe the situation from the inside. I see that customers are asking what the factories offer (not just one or two salons, but in general - both Russian and foreign brands). And I also deny the word "trend". It is fashionable, but it does not bear realities. There are some changes in the requests, in the proposals, but the "trend of the season" for this huge area - in my opinion, just a big word. That's why, probably, some of the misconceptions crept into the text (again, in my opinion). We have long been putting separated refrigerators (in some projects even 2 + 1 - very convenient!), Almost all the time I work with induction (pots are almost all suitable for it, and in families with children it is especially favored). If I wrote about trends in the visual range of cuisines, I would say that advanced customers who prefer modern styles actively choose (ask, agree) kitchen walls (when a series of facades merges with the surface and does not pretend to be a kitchen) - and Both in the expensive and in the budget segment; Very like concrete and its imitations, a multiple breakdown and interesting internal hidden elements (boxes behind one facade, retractable sections in growth, retractable into the wall of the door).

10 fashion trends - 2016, which stepped from the podiums into the interiors - etk-fashion.com

10 things of your home that should be bright - etk-fashion.com

How to apply in the interior one of the main colors of the year - "fiesta" - etk-fashion.com