How to save time and effort in the kitchen? What are the ways to minimize physical stress and speed up the cooking process? It's all in the working triangle. Today, we understand what it is. Every hostess dreams that her kitchen should be as comfortable and comfortable as possible, and cooking and cleaning time should be kept to a minimum. To do this, it is necessary to properly organize the so-called working triangle.

The base of the kitchen triangle

The essence of the working triangle is quite simple -visual integration of the main elements of the kitchen, such as the stove, sink and refrigerator. The cooking area, the washing area and the storage area are the main "whales" on which a competent approach to organizing the space in the kitchen is built. Correct design in the future will help save time and effort of the hostess. Elena Krylova, designer of luxury interiors: - The triangle may look different in different layouts. In a linear one, for example, the third point can be a dining table, which can be used as an additional work surface, just like in a kitchen with an island. L-shaped and U-shaped kitchens allow you to distribute the working triangle in large spaces, so that everything is at hand. And in a parallel kitchen layout, it is beneficial to distribute the working triangle in this way: on one side there is a stove and a sink, and on the other - a refrigerator and a work surface. 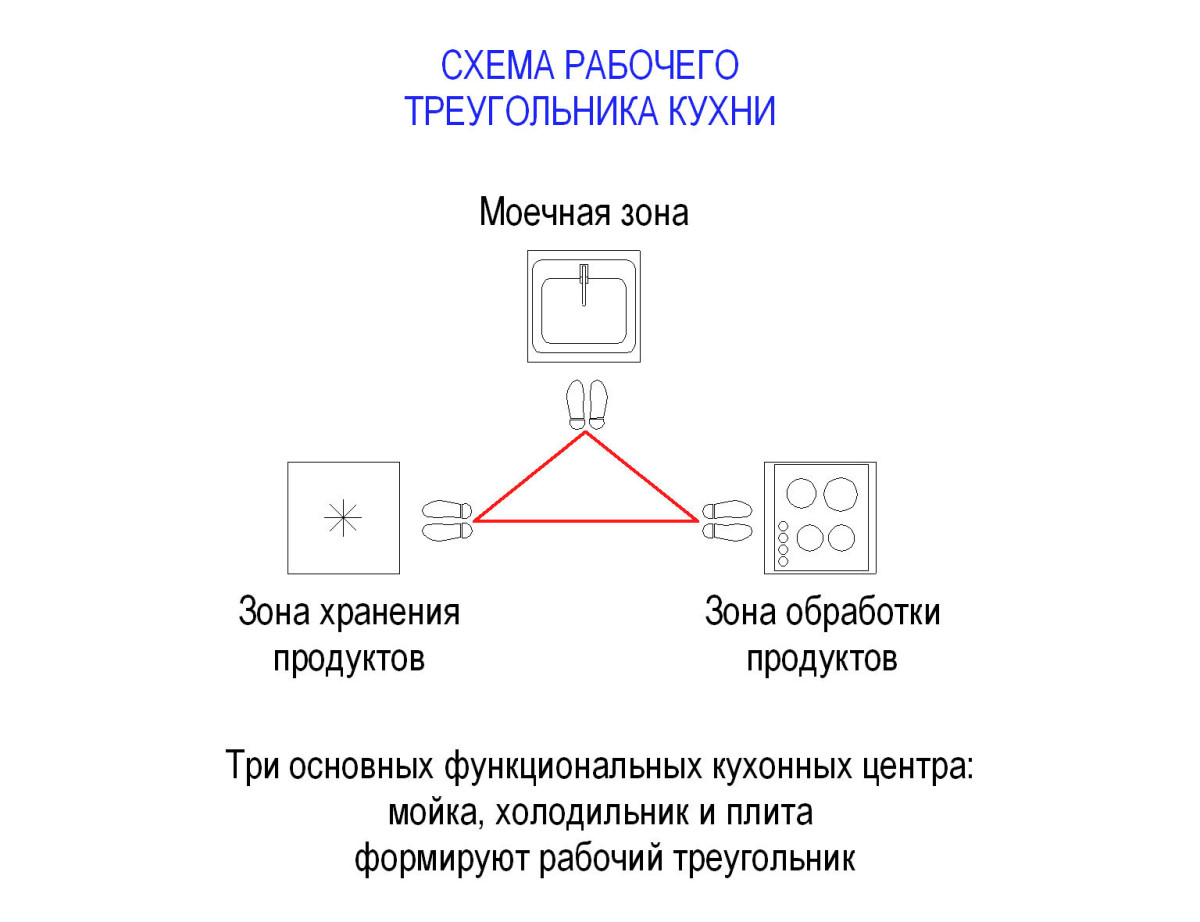 So that the kitchen does not seem too crampedthe distance between working areas should not be made too small. At the same time, so as not to get tired while cooking, the distance should also not be too great. So how do you find a compromise? The ideal distance is when all working areas are located in the corners of a triangle with equal sides. The optimal distance between working areas is not less than 1.2 meters and not more than 2.7 meters. These standards were developed in 1940 for small kitchens, but they are still relevant today. Of course, it is worth remembering that the distance in the triangle depends on the shape of the kitchen and does not have to be perfectly equal. Our opinion: - When organizing functional areas, it is not recommended to install the stove next to the refrigerator or sink. It is desirable that there is some distance between them (about 60 cm). 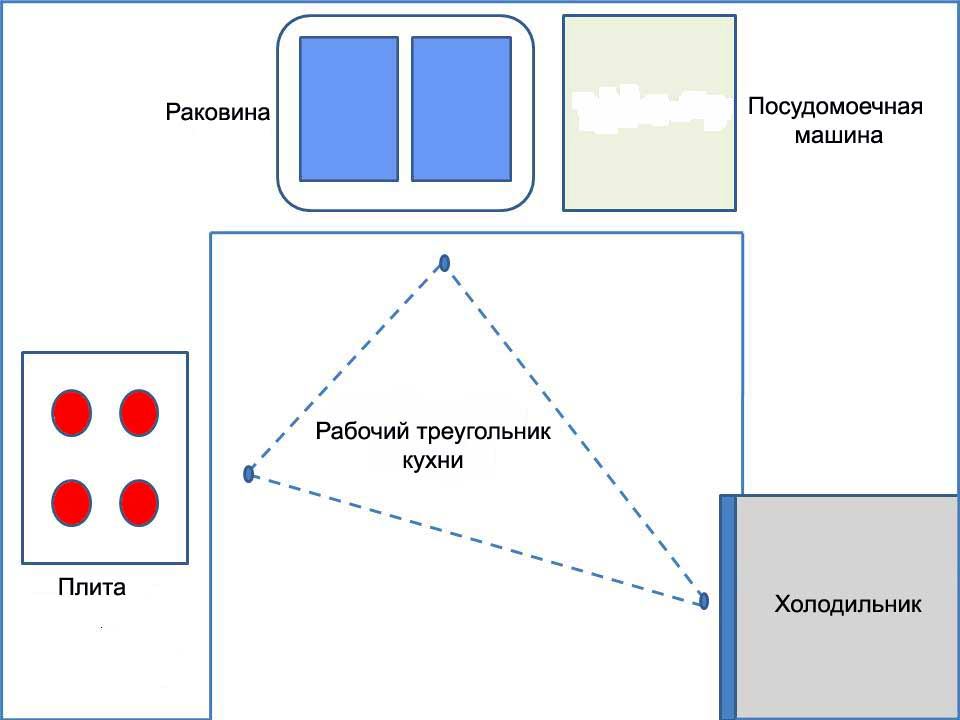 The working triangle can be different, and itsthe exact shape will depend on the kitchen layout. Consider the main types: With a single-row kitchen layout, it is more convenient to place the sink between the stove and the refrigerator. This will ensure good access to food. It will not be difficult to quickly reach them, wash, cut and then cook. With a two-row arrangement of the kitchen is better workingthe triangle is made from two sides. That is, for example, a sink and a refrigerator to place on one side, and a plate - opposite them (in the visual top of the triangle). 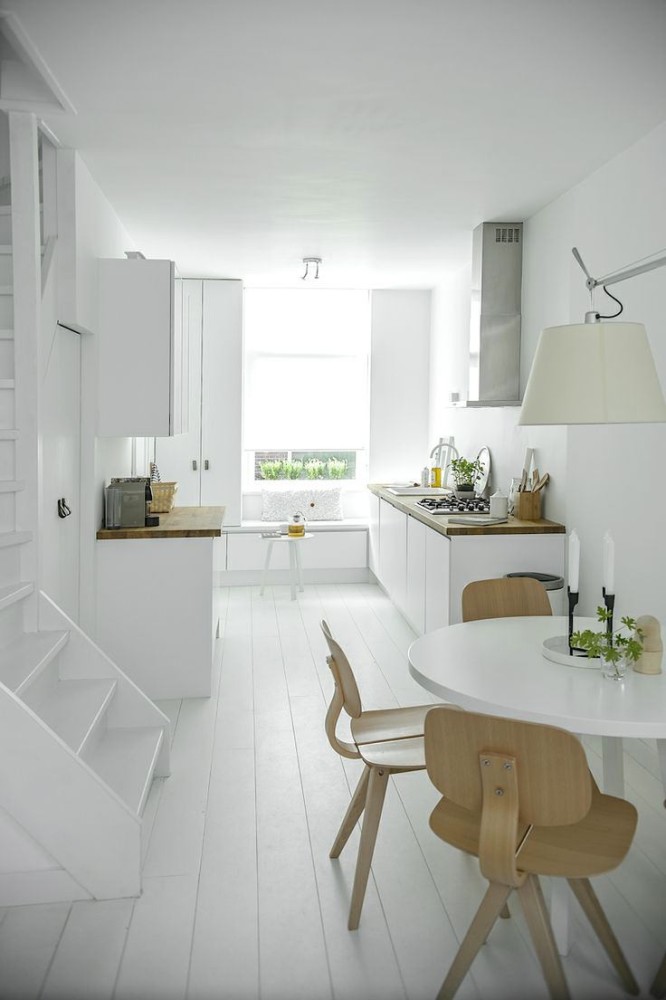 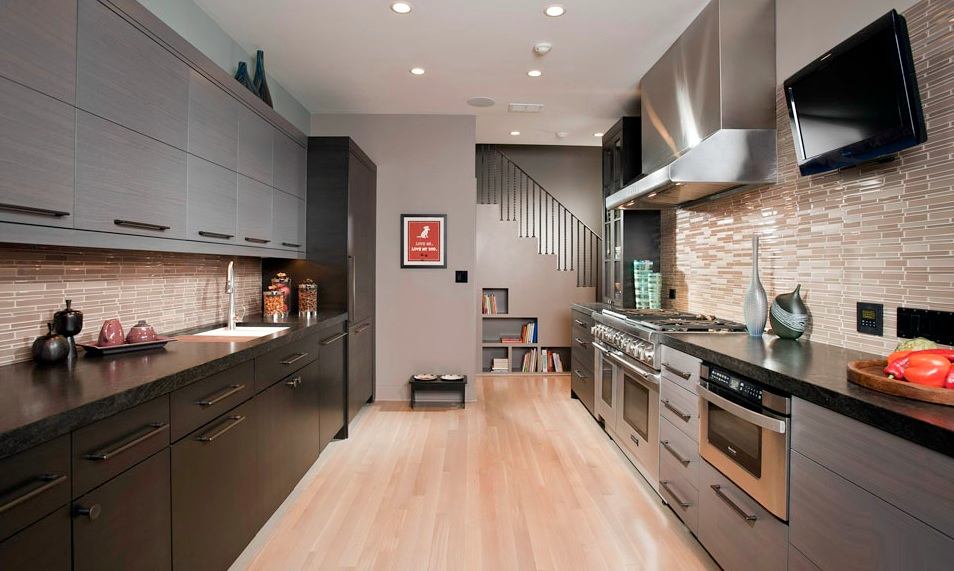 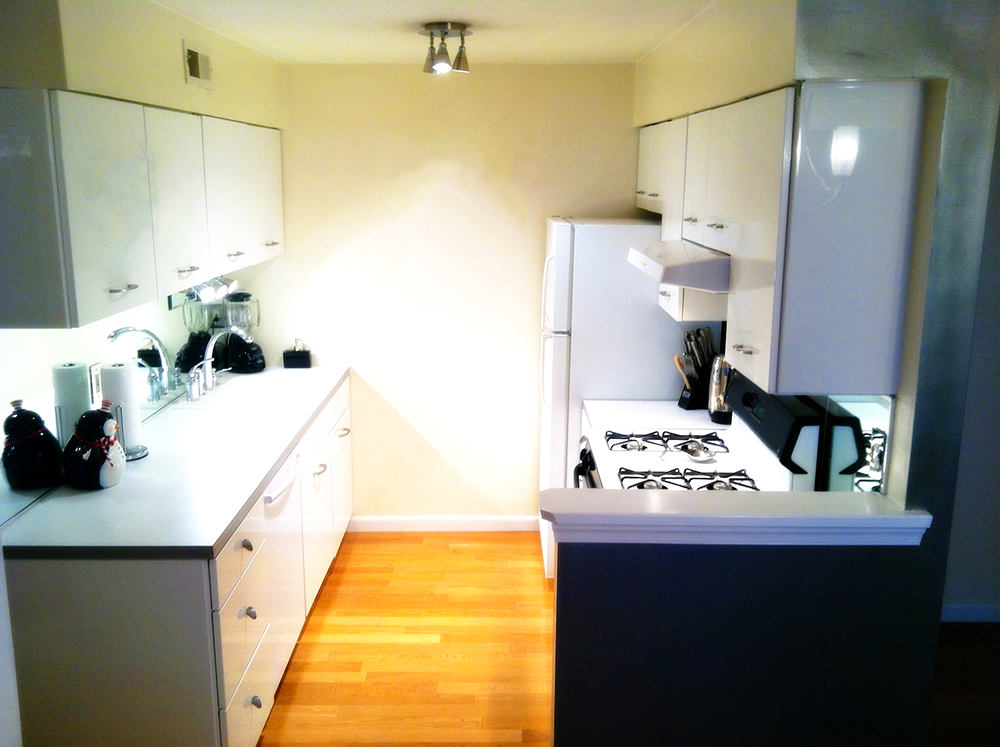 With the L-shaped layout, it is recommended to install a stove and a refrigerator in different corners of the kitchen, and between them arrange a sink. With the U-shaped layout of the kitchen, three rows of furniture are supposed, so it will be more convenient to place the car wash in the middle row, and place the other functional zones in opposite sections. With island planning, it is more rational to arrangeslab on the island, and on the other hand - a sink and storage area. It is possible, of course, to install a car wash on the island, but then additional costs will be needed to transfer the communications. 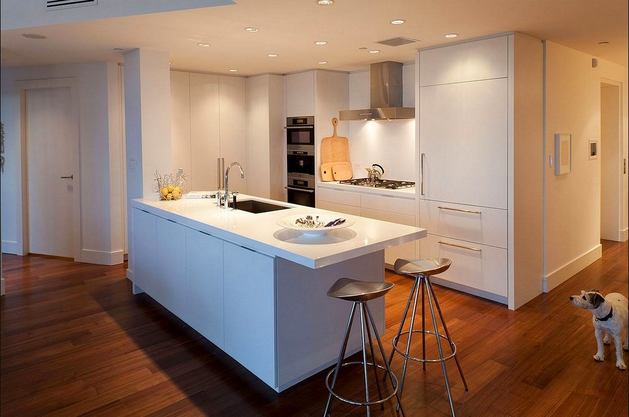 Our opinion:- When planning the kitchen space, in addition to observing the required distance, keep in mind that nothing under your feet should prevent you from moving around the kitchen (stools, trash can, etc.). Anastasia Muravyova, interior designer: - You should be especially careful about the triangle rule if two people are cooking at the same time in the kitchen. The trajectories of their movement with an incorrectly built scheme will intersect, which is not only inconvenient, but even dangerous (for example, if someone is moving around the kitchen with a hot saucepan). Ideally, the triangle is isosceles. However, this is not always possible. In small kitchens, a linear layout is often used, and then the triangle turns into one line. In the case of a small kitchen, it is important to ensure that there are at least small work surfaces between the zones, otherwise it will be inconvenient to cook, disassemble food and dishes, and the service life of kitchen equipment will be reduced. If the area allows a dishwasher, make sure it is near the sink, otherwise loading the dishes will be more difficult. Linear layout should not be used on large areas, as the intervals between zones will be too long. L-shaped layouts are often used in medium-sized kitchens. Most often, a sink is located in the corner, and cooking and storage areas are located along two walls, as a result of which a regular triangle is formed. Sometimes a parallel layout is used: a sink and a stove are placed along one wall, and, on the contrary, storage areas. In this case, the width of the passage between the two rows of kitchen furniture must be taken into account. If it is too large (more than two meters) or if there is a dining table in the center of the room, then it will be inconvenient to cook. A variation of a parallel layout can be a kitchen with an island, but it requires more space. For the convenience of using the island, there should be free space around it with a minimum radius of 1.2 meters. I prefer to place the washing and cooking zones side by side, rather than opposite, so that the hostess does not have to cross the aisle with hot pots and wet objects. If the island is large enough, both a stove and a sink can be built into it. Otherwise, it is better to use it for storage or provide seats there, and build the main front of the kitchen according to the principle of a linear or angular layout, depending on the configuration of the room. decotrend.ru, mebex.com.ua, jkuhnya.ru