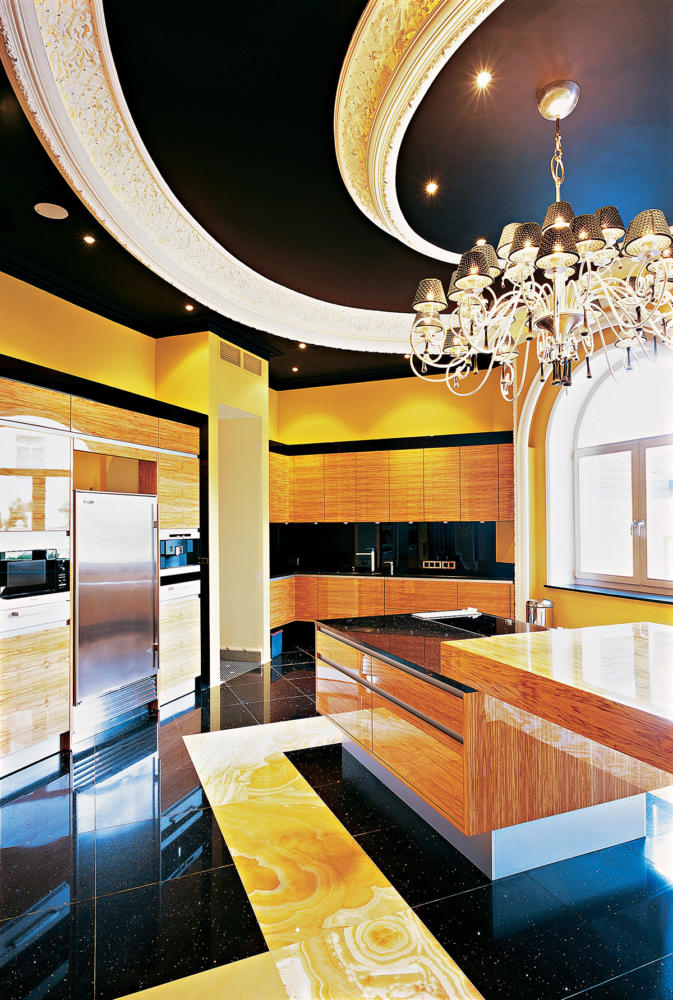 You knew that you just need to give upcanons, so that space can be played with new colors and facets? So new directions arise, from which absolutely unique styles are born. And today we will talk about what is the Liberty style and why it became so popular. Only we know best how to build the Hermitage. But this is not necessary - because a Russian person loves such spaces in which one wants to live. And to create light, elegant, enchanting and, most importantly, comfortable interiors, you must abandon all the rules and start dreaming. This is what the interior designer Marina Putilovskaya thinks, in which all projects are a real flight of imagination, and the invisible spirit of freedom is felt literally in every detail. Marina Putilovskaya, interior designer Famous Moscow designer and head of the architectural bureau, engaged in the design of private and public interiors. She created objects that have become cult, such as the Palazzo Ducale, Tsar's Hunt, Dragon Temple, White Sun of the Desert, and Ki-Ka-Ku. Among its clients are well-known cultural and political figures, and every project is a true masterpiece. Such famous companies as Mechini, Medea and many others produce furniture, lamps and accessories according to her sketches. putilovskaya.ru The project "Romanovo" In the history of world artthe Liberty style has already taken its place densely. It appeared in Italy at the beginning of the last century, along with Russian modernism and the French art nouveau, when creative thought became closely in the classical framework due to the evolving production and new technologies. It is thanks to them that artists, designers and architects were able to create truly unique objects and interiors that struck contemporaries with completely atypical but very attractive forms. Element of the table from the collection NEW LIBERTY, whichcreated by the sketches of Marina Putilovskaya And right now we are witnessing the birth of a new style, the name of which is New Liberty. It is a style of new antiquity, refined exquisite and special vision of space, when emphasis is placed solely on freedom of expression. Liberty in general can be called one of the most beautiful trends in the history of architecture and design for delicate and smooth lines, special combinations of colors and closeness to nature. Marina Putilovskaya: - Animals and birds, twisting branches and elegant ornaments, plant motifs and natural tones, stucco molding and a huge number of decorative elements - all this is so familiar to the Russian soul and loved by it. The style of liberti is the most complex among all classics, and it's not just some special sight. This is the whole ideology that we are trying to find and understand. 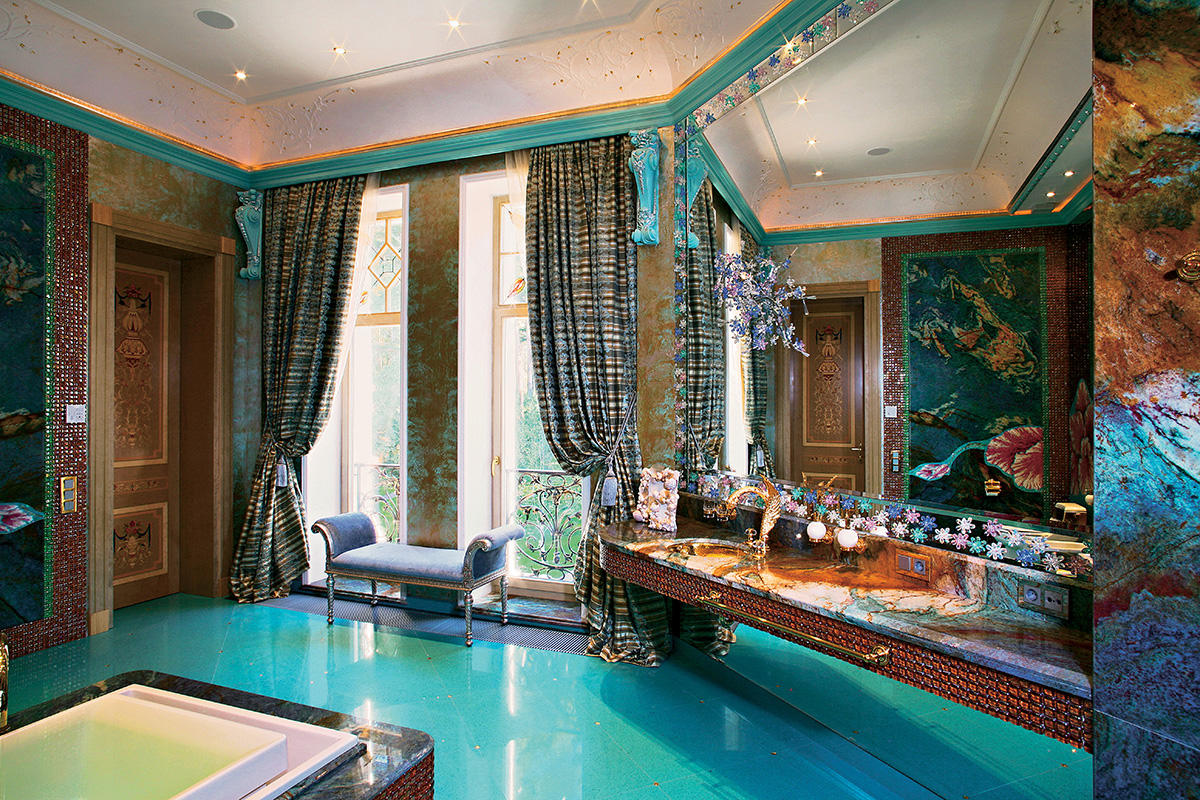 Project "Romanovo" Projects in styles of LibertyDesign Bureau Marina Putilovskaya really unique. They are comparable to the interior works of Victor Hort and Henry Van de Velde, the architecture of Antonio Gaudi and Fyodor Shechtel, the ideas of Hector Guimard and Augustus Endel, but they have their own characteristics. This is not a classic in the direct sense, not modern and not art deco, but something really new, something that no one else has seen. 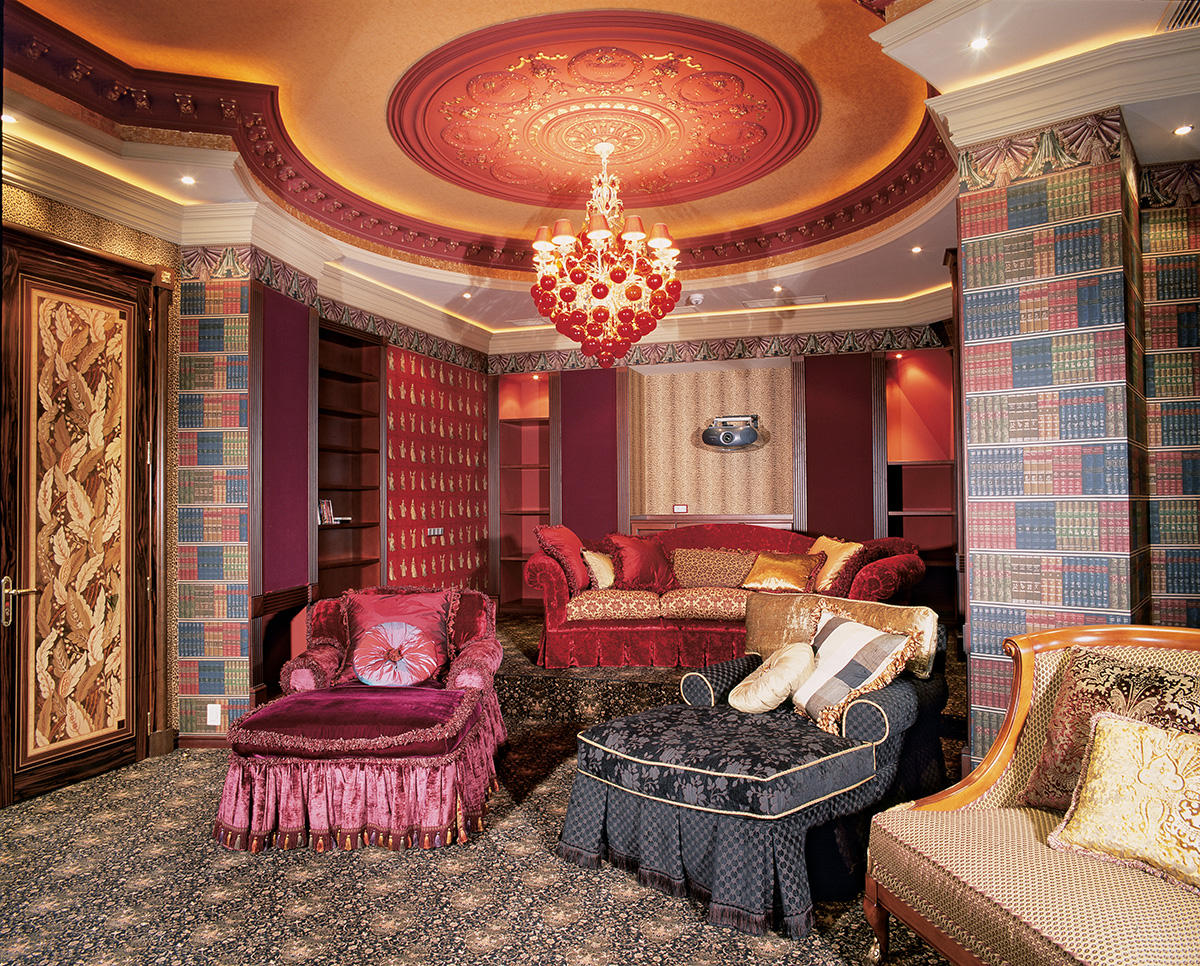 The project "Romanovo" Liberty today is freedom,the ability to build what you want, without any restrictions. And new technologies, materials and approaches make it possible to change the structure and design, allowing to get away from the classical canons, thus creating an entirely new concept. What is already there is done even better, what you liked yesterday will become even more advanced tomorrow, and it is always worthwhile to go only forward, using many years of experience. The main thing, Marina Putilovskaya says, is to dream more and never stop at what has been achieved. What is the elegance of the Liberty style? For example, in the project "Nikolina Gora", the authors outlined every detail, from beginning to end, inventing this stunning stucco or floors that are simply nowhere else to be found, as well as beautiful furniture and unique accessories. As a result, every detail, up to the flowers, petals and plafonds, was made by Russian masters according to the sketches of Marina Putilovskaya. For each door, stained glass was drawn; wide portals and arches look solemn, and in huge halls, flowing one into another, and the music of Tchaikovsky or Rachmaninov is heard, which is the place in such interiors. 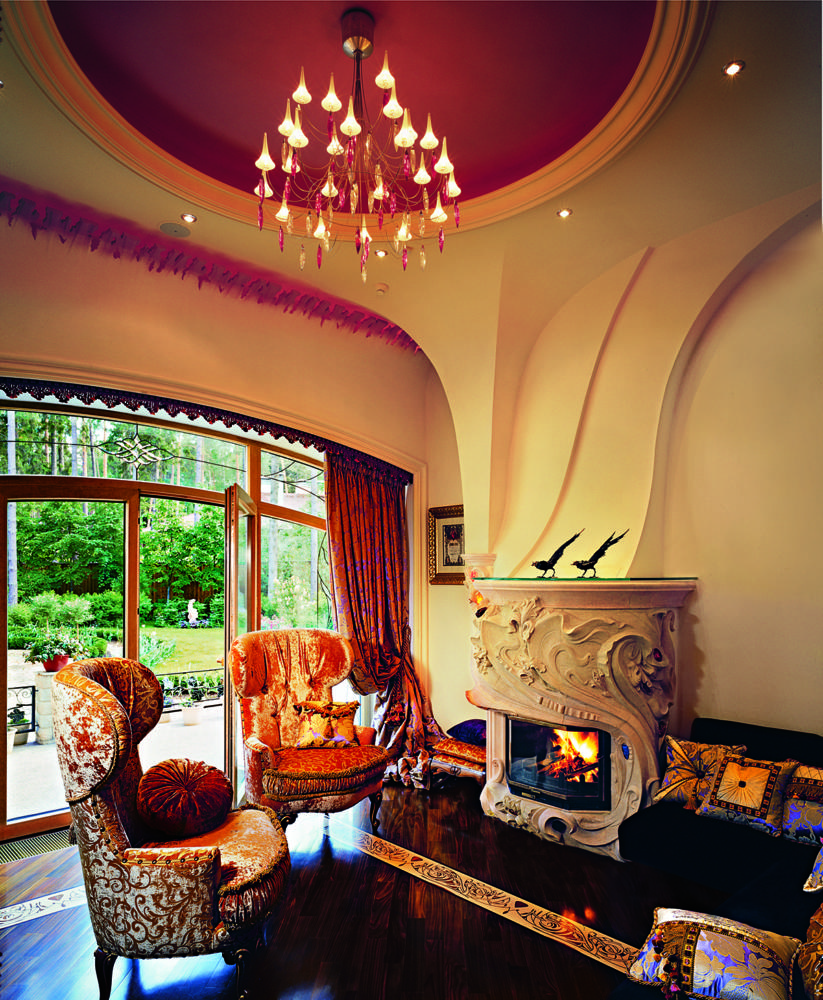 One of the first independent projects was therather unusual object, called "Sivtsev Vrazhek" - in honor of the street of the same name. A large amount of glass, white on the walls, furniture and ceilings is a real "snow kingdom" where all space flows and curls, swirls and twists, and you absolutely do not understand where you are. Many later called this project the new "Russian Gaudi", because such a strong curvature of space, smooth lines made not just in stucco, but in architectural forms, and the very construction of the apartment really reminds the ideas of the Spanish architect. And most surprisingly, every detail is reflected in the glass and lacquered stretch ceilings. Marina Putilovskaya says that this is her first experience when asked to make an apartment the way she wants, so it was possible to create boldly. 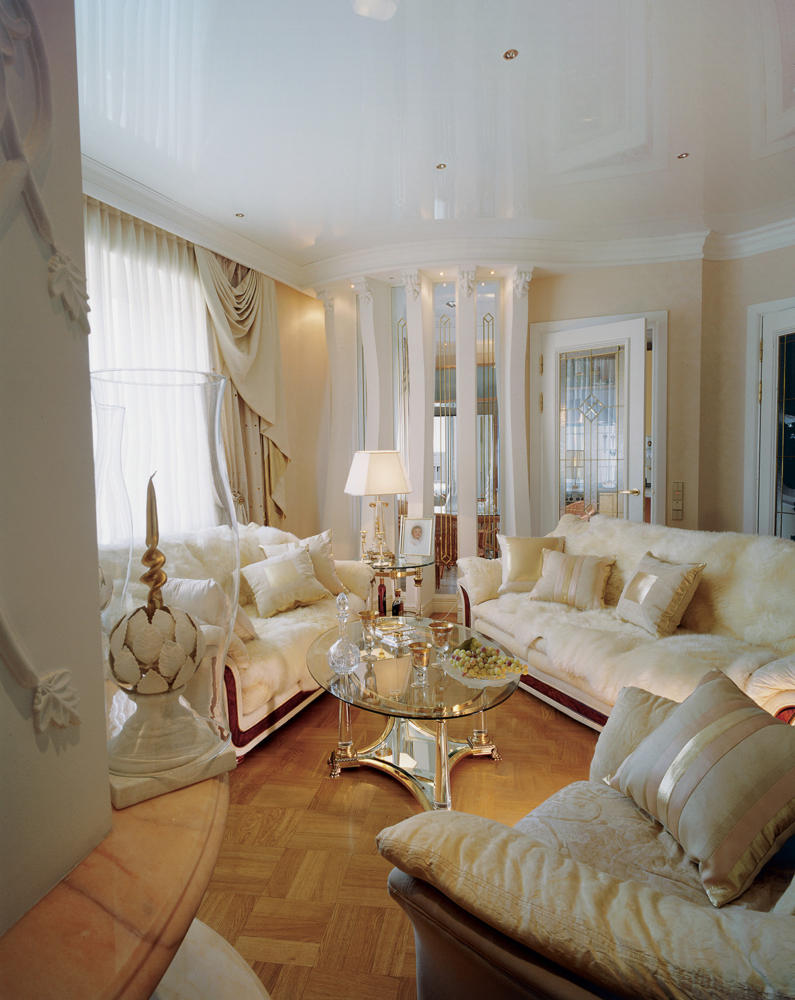 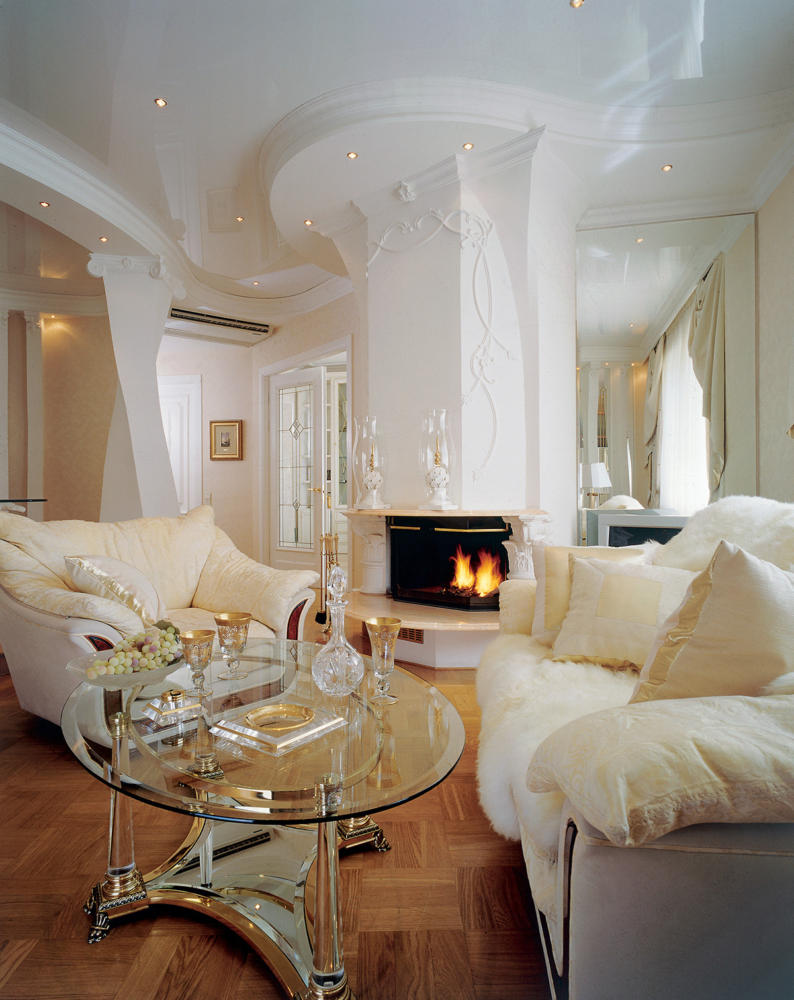 Project "Sivtsev Vrazhek" Another of the masterpieces -apartment "Sokol", which has become a perfect example of the modern style of Liberty with its panoramic windows and a swirling staircase, a marble panel and space, literally flying in all directions. It immediately catches the eye big windows, reflections in the mirrors, stucco molding, a gorgeous staircase and a marble panel descending from it, as well as the very atmosphere of lightness and airiness, which represents that freedom. Marina Putilovskaya: - It is impossible to imagine how many people wished themselves then exactly the same apartment. Every woman said that this is her dream! The project was created for a completely stunning woman, she is as light and airy as the whole interior. And every morning the hostess, walking down a weightless crystal staircase, steps on the floor, dotted with a pattern of flowers. Fantastic! 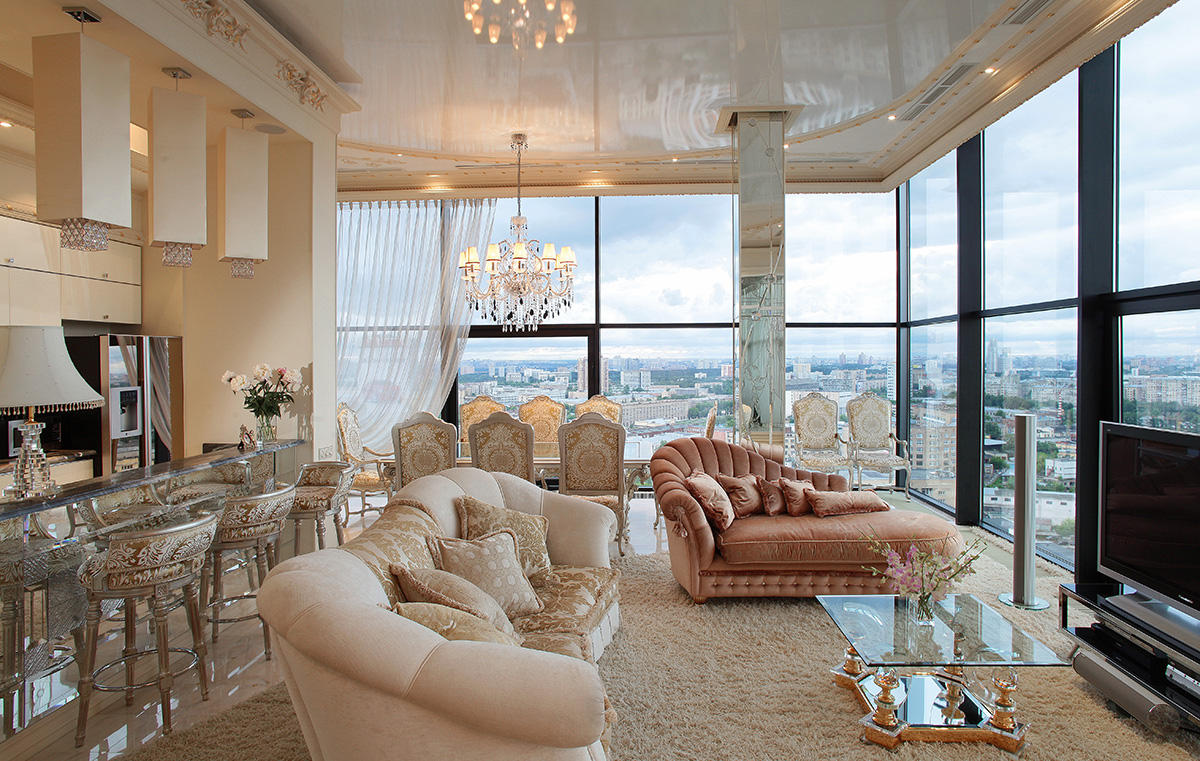 The scale of the idea and the very spirit of the Liberty style can befeel not only in the implemented projects of the design bureau Marina Putilovskaya, but also in her new collection, created in conjunction with the company Medea. The brand is known all over the world and even entered the top five of the best Italian companies working with classics. Each subject in the Liberty style was selected individually, carefully studied and restored with special love, so that in the end a unique work collection was obtained in which designers would draw inspiration for new ideas. 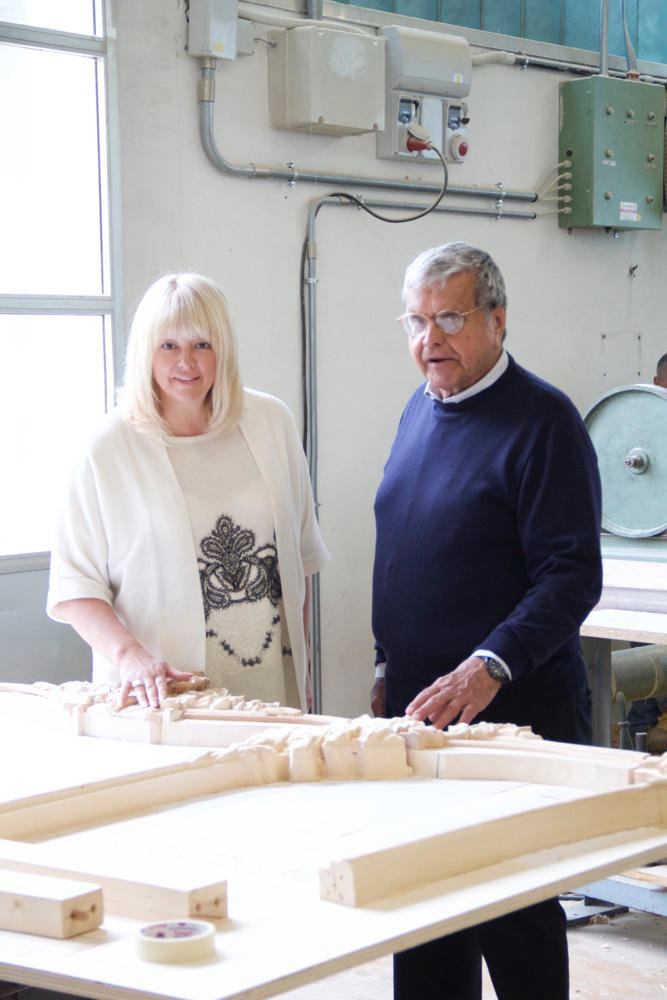 Marina Putilovskaya and Augusto Talyabue (hostof the factory Medea) Marina Putilovskaya: - I was shocked when I first met Medea products more than 20 years ago thanks to Gregory Baltser and the Ruslan store. It was impossible not to fall in love with this! And when the company last year asked my opinion about their collection in the Liberty style and asked to look at it with a different, modern look, I with great pleasure started to work. I recalled every my project, my sketches of furniture for many recent years, because all of them, one way or another, were the steps to creating something really new and unusual. From individual sketches and ideas, such an interesting concept has turned out that it was worthy of a whole stand in Milan at the iSaloni 2017 exhibition! 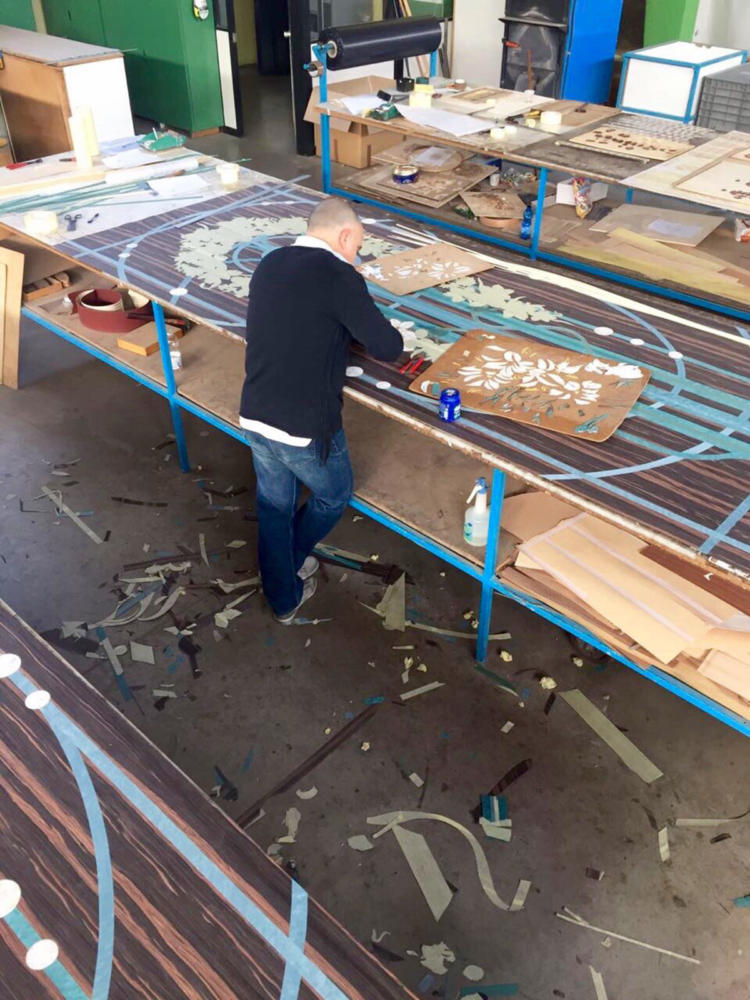 In the shop of the company Medea. Work on the door for a new collection of New Liberty, which was created according to the sketches of Marina Putilovskaya 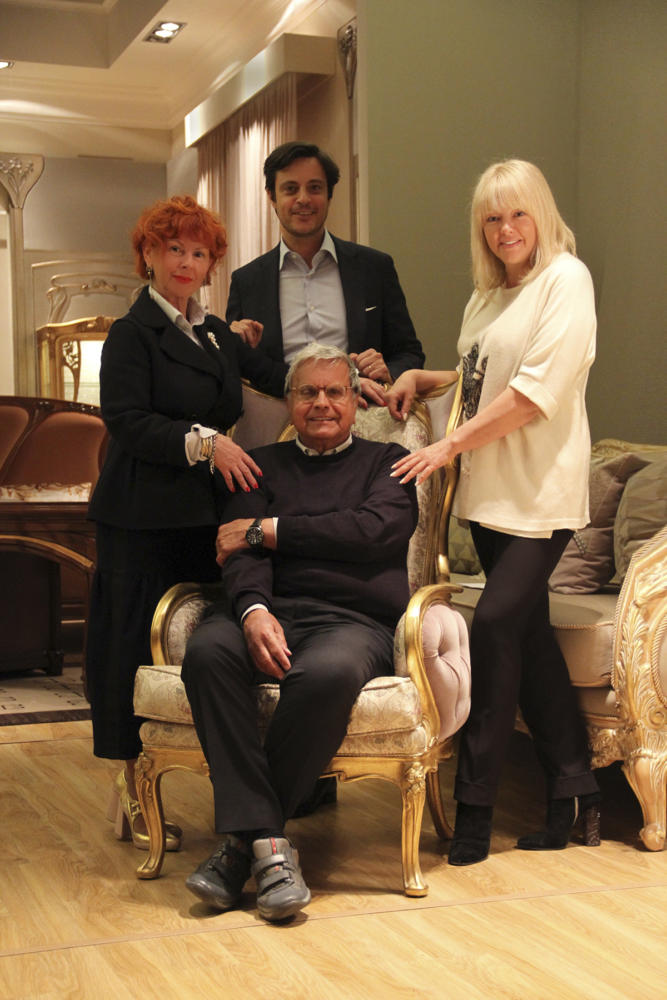 Pinuchia Provazi (designer), Luigi Tagliabue(director of Medea), Augusto Taliabue (the Medea factory) and Marina Putilovskaya. The company Medea has been known for more than a century for its exquisite furniture, which everyone likes for its respectable appearance, which speaks of nobility and uniqueness. Aristocrats around the world, furnishing their homes, first of all pay attention to novelties of the brand. Among them there is a ruler "Prestige", which makes them a star of Italian design, a collection produced by young and promising masters, and, of course, "Liberty". It embodied everything, for which the style became so popular not only a hundred years ago, but also in recent years. Each object is made so elegantly that it can easily be confused with the best specimen from an antique store - so all of them are amazing and unique! A collection of furniture and accessories by Medea branded by Marina Putilovskaya will be shown at the Salone del Mobile exhibition, which will be held in Milan from 4 to 9 April. To learn more about this collection called Mplux, it's worth going through. 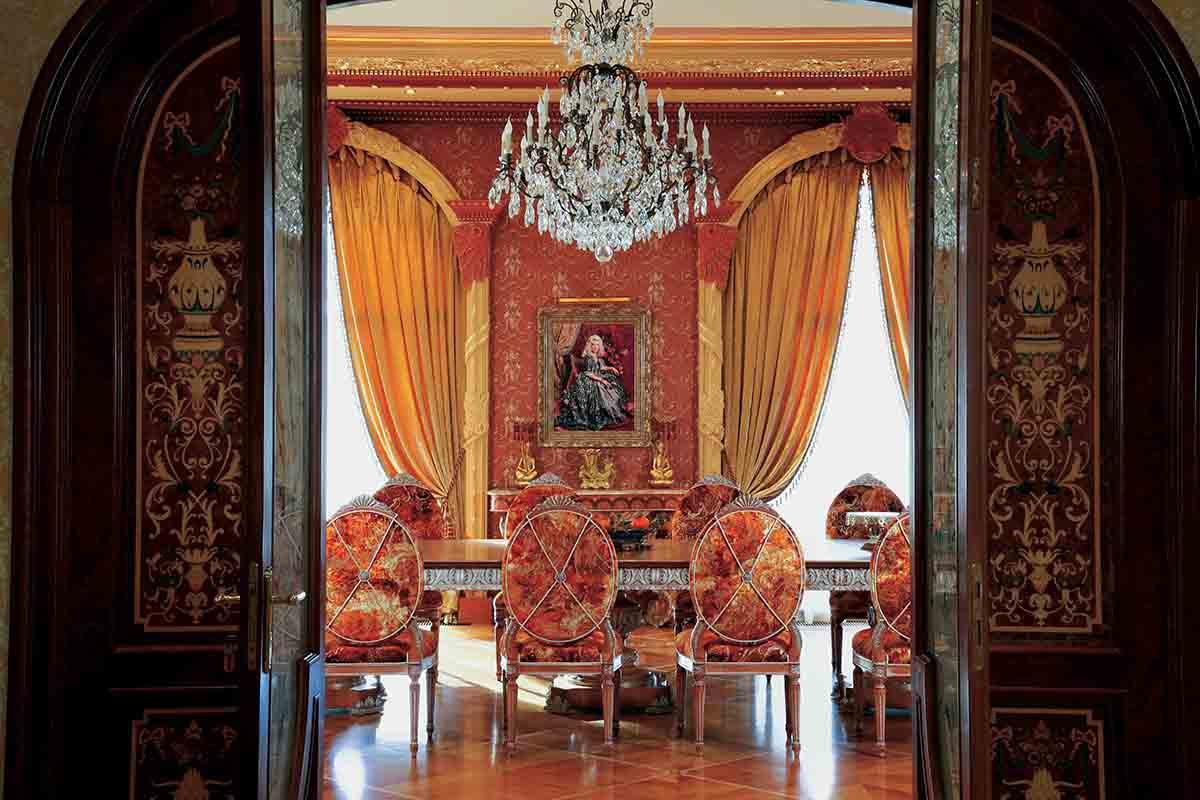 Toxic materials in your home: find and neutralize - etk-fashion.com

Minimalism, light interior and natural materials in a country house in Agalarov Estate

Do not save on your dream: 9 interior design tips

October 16, "HOGART_Art" will spend the day of architecture in its salon in the center of design Artplay - etk-fashion.com