How to successfully restore a house if it has been in it for a long timedid not make repairs, and it itself was built several centuries ago? Is it possible to preserve the old architecture, but make the home modern? The most famous decorator in the world also asked this question. The house we want to talk about today was built in the 18th century in France, in the Laura Valley. It has not been renovated since its construction. It was necessary to rehabilitate the building and preserve its identity. How did you manage to turn an old farm into a real French cottage? Jean-Louis Deniot, decorator, designer Is in the list of the 100 best designers in the world. He is inspired by the images of French classics from different periods.

When Virginia Deniot and her husbandpurchased a farmhouse, it was a rectangular structure with premises in need of repair. Some of them were used for stables. The living space was about 10% of the total building area. It is clear that the building required serious reconstruction. But this did not frighten the newly made tenants of the house, since Virginia is the head of the design studio and business partner of the famous interior designer and decorator. In addition, he is her beloved brother and co-owner of the house. Jean-Louis embarked on a challenging project with inspiration. The restoration of the house took over a year. But the end result is impressive.

Transformation of the farm from the 18th to the 21st century

The main task was to create Frenchcountry house, preserving the ancient atmosphere of the 18th century. But at the same time, it was necessary to make it comfortable and suitable for the 21st century. A careful approach to the choice of fabrics and materials helped to preserve this fine line, as can be seen in the example of furniture: objects from the 50s and 60s get along well with French neoclassical works. First, a passage was built between the house and the neighboring stable. On the ground floor, there was a living room and an open kitchen. The bedroom was converted into a library. The former kitchen with a brick hearth became Jean-Louis's own room. The designer has developed a bed in the style of Louis XIV for the bedroom. The canopy over the bed is made of burlap and decorated with fringes, the edges of which were carefully leveled by hand to get the desired result. The pantry was turned into a bathroom. At the top of the building there are also three bedrooms, a media center and two bathrooms. Windows were installed in the attic to fill the second floor with light. The bathrooms have recreated the atmosphere of the 18th century. Antique cabinets, sinks were installed here, and the floors were tiled with classic terracotta tiles. The fireplaces in the house are made in antique style and create a cozy, relaxing, ancient atmosphere. 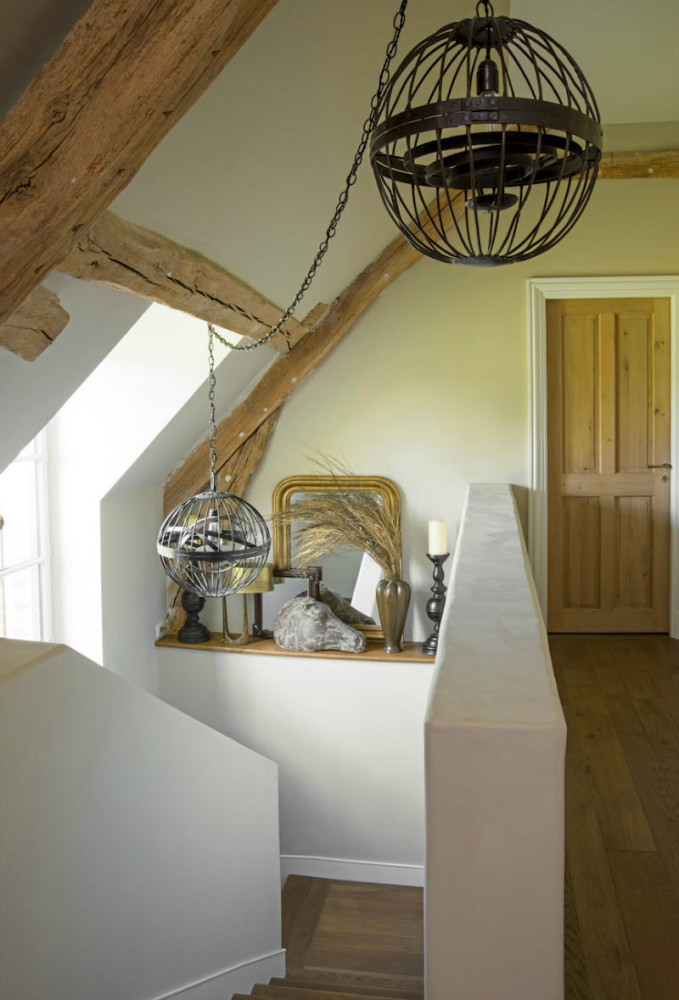 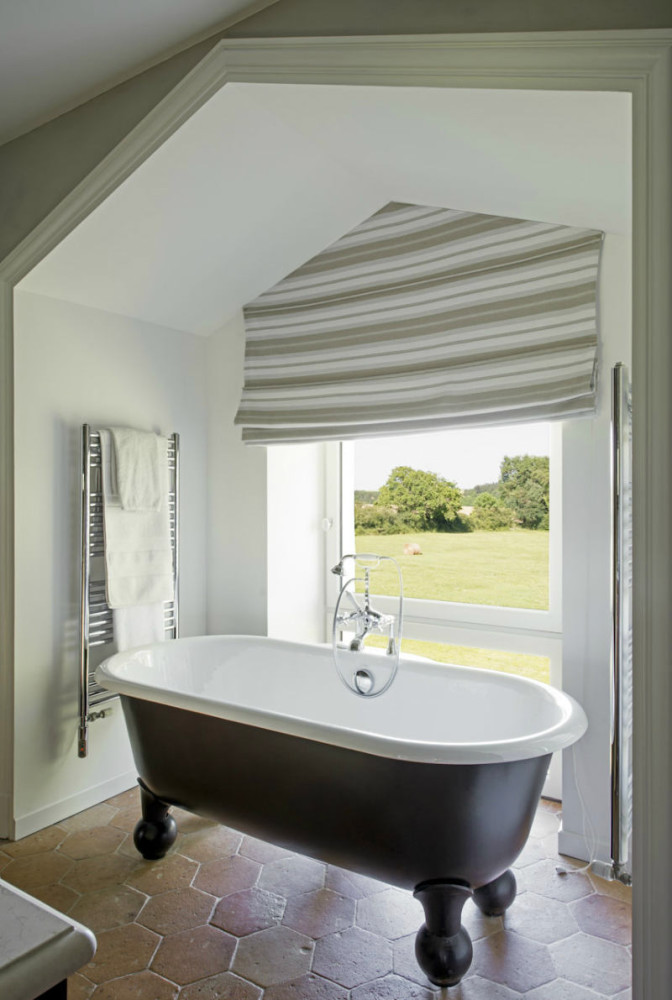 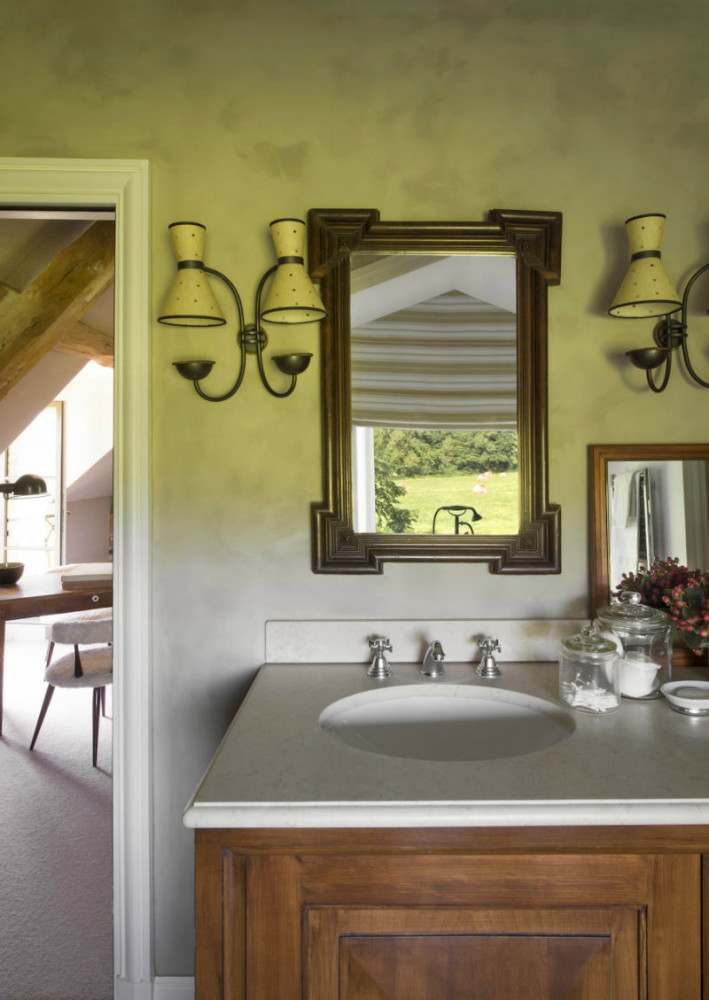 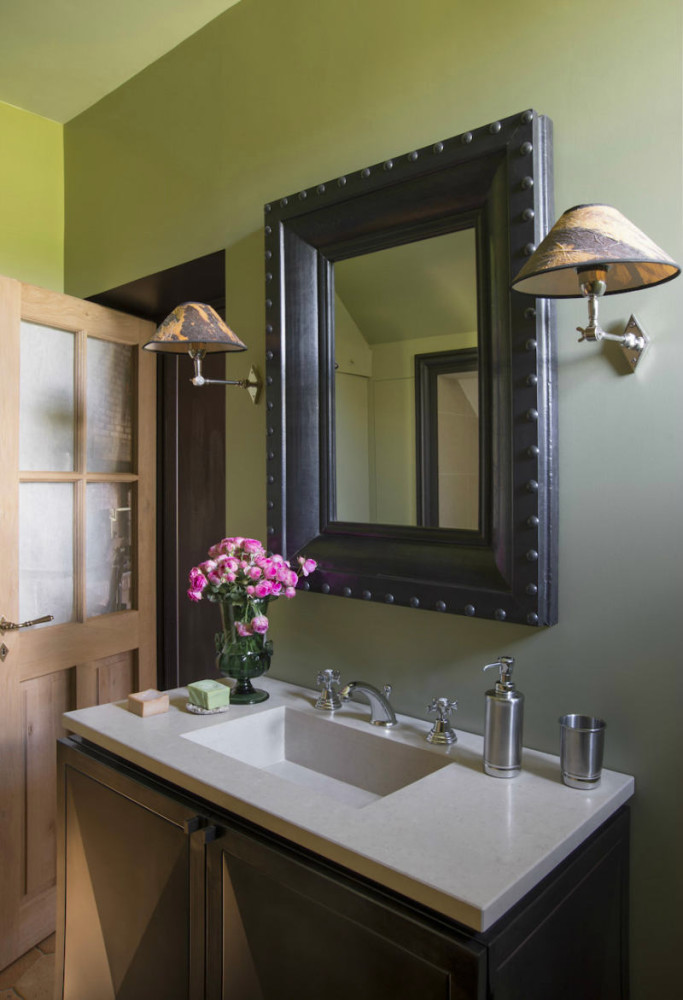 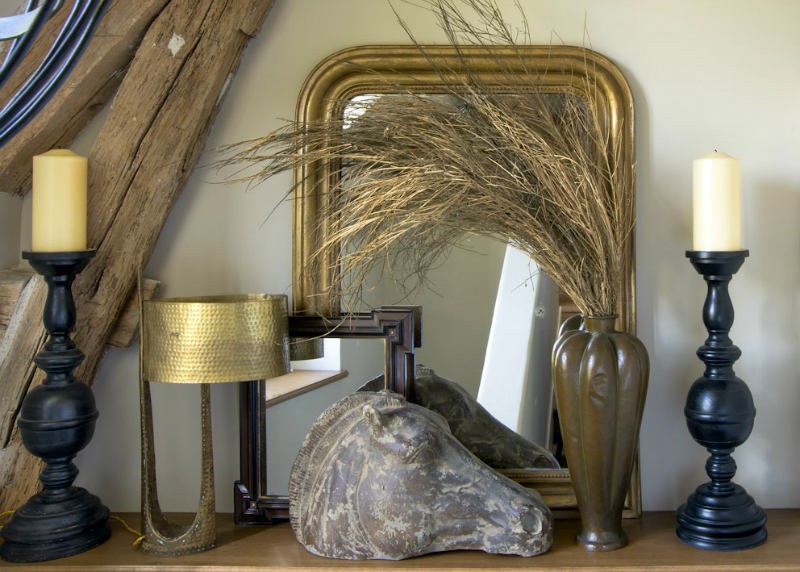 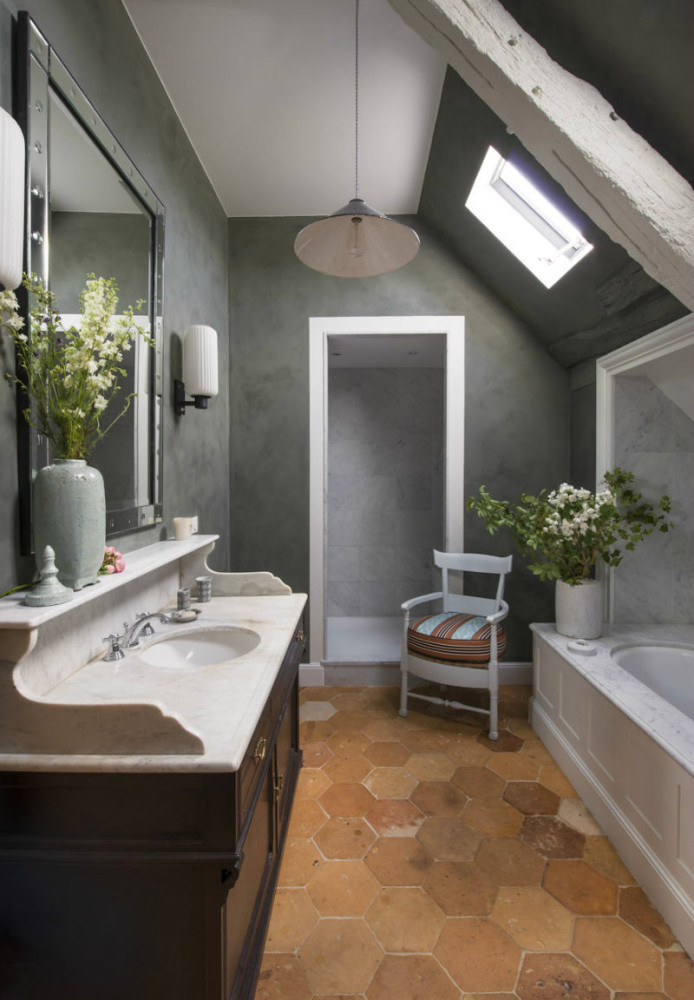 It was important for the owners of the farm that the floors wererooms have become warm, because they have a little daughter. Therefore, a modern radiant heating system is installed under the floor. Now this type of heating is more often used in country houses. Ceramic tiles on the floor enhance the feeling of the antique atmosphere and work well with wood beams to add warmth to the interior. The doors are custom made from simple oak planks. The owners of the house thus wanted to preserve the simplicity of the French farm. 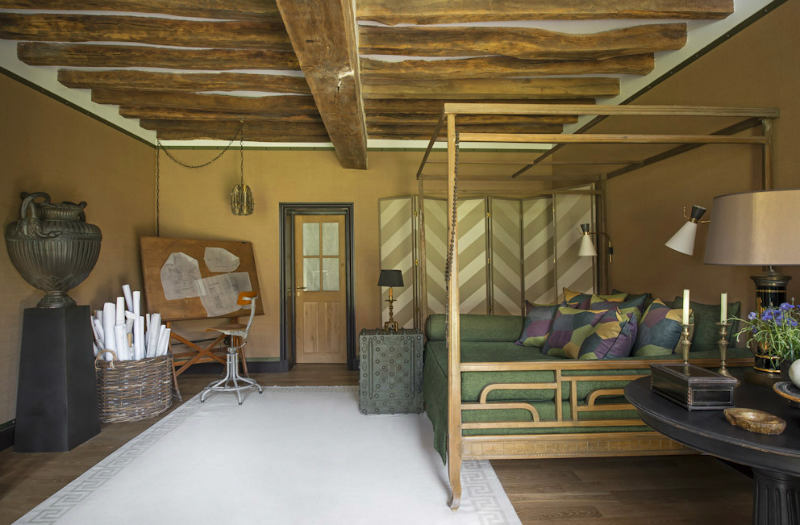 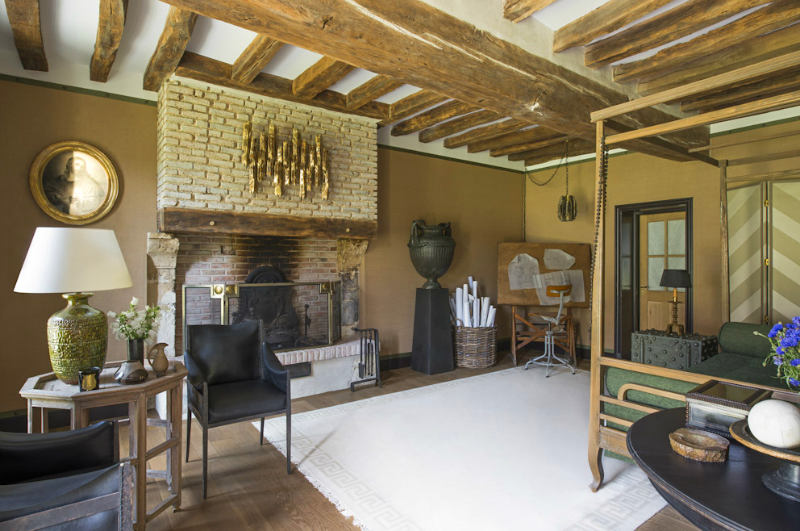 The house is filled with amazing antiques. They were brought from travel, and many of them were bought in the flea markets of Denmark, Italy, the USA: As children, brother and sister often went to visitto her grandmother, who lived in Scotland. These trips left a warm mark in the hearts of Virginia and Jean-Louis, so they could not ignore the theme of Scotland in their own interior. And we played on this theme in the design of the library. By the way, here, too, there were some elements brought from travels. For example, Jean-Louis brought a cashmere blanket, curtains and dark wool from Delhi. Our opinion: - If you want a soothing environment in the library, use the cage in the interior decoration. This drawing creates a sense of order and harmony. The game of textures and colors

The designer chose a dark color scheme forwall decoration to make the space look more comfortable. He then used light shades in the fabrics to add some air to the space. Sheepskin, untreated wood, rusty metal and leather, gathered under one roof, perfectly complemented the color scheme. They equally emphasize each other's dignity. The interior of the house is warm, relaxing, atmospheric and original. 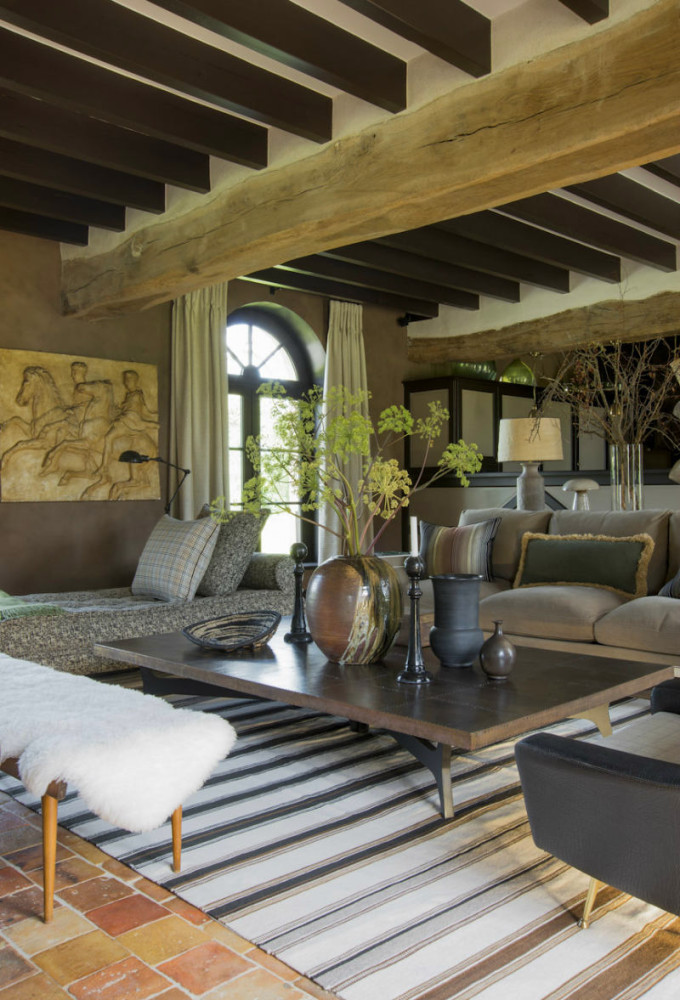