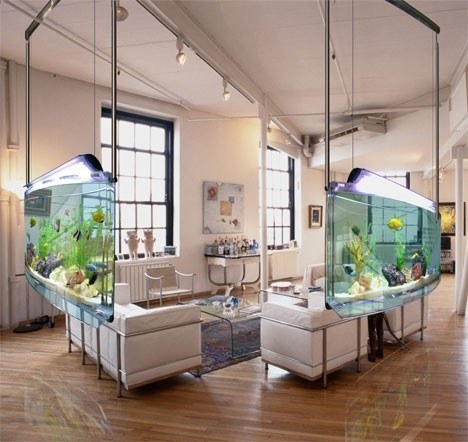 Cooking is your passion or the basic familyduty? And what if to diversify routine procedures? Observation of the underwater world calms the nerves, helps to concentrate attention and allows you to escape from the hustle and bustle. Finally, the aquarium is just beautiful. In our article - the most interesting examples and opinions of experts. Find a peace of mind, decorate your house and approach nature. The aquarium solves several problems at once. But if in the living room or bedroom a piece of the sea has long been surprising, then the fashion for the aquarium in the kitchen is just gaining momentum. Aquarists with the experience frown: "Pets are not an object for decorator experiments." And designers try to combine a comfortable and beautiful house for bright fish with a practical and functional interior. 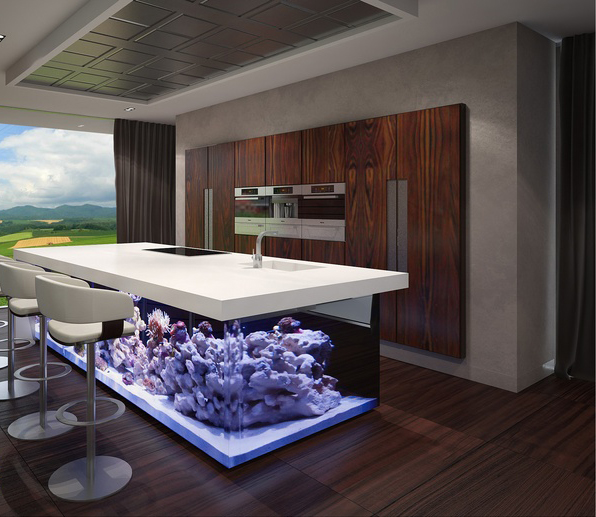 "Oceanic cuisine" - that's how he called his unusualcreation by Dutch designer Robert Kolenik. He first came up with the idea to place the aquarium under the countertop. It took 3 years from the 3D concept to the development of the finished sample. Technologically, the task turned out to be very difficult. But in the end everything worked out. Robert Kolenik, designer at Kolenik eco shic design: A young Dutch designer by profession - an economist. In Europe, he is known as the founder of the new eco-style style. Its spaces combine big media with sustainable design: functional, minimalist interiors are created from exclusive materials with the addition of state-of-the-art equipment and high technology. Robert's lack of an architecture degree is more than a substitute for a living experience - he started work in his father's construction company. Now his own firm is decorating private and public spaces with a touch of ecological glamor throughout Europe. For 8 years, he managed to complete dozens of fantastic projects, including the Flatcher hotel in Amsterdam, Restaurant Club Touch, Cocktailbar Go Ten and many others. kolenik.com A glass island with tropical fish inside - in practice, this is a very functional element of the interior. The island became the visual and semantic center of the dining area, immediately attracting attention. It seems that the aquarium is absolutely transparent, and the table top "hovers" above it. In fact, this is not so - the water tank is made in the shape of the letter L. It has all the necessary kitchen cabinets on the back side, and the desired effect is created by the mirrored back walls and water that works like a magnifying glass. Robert Kolenik, designer:- In fact, the secret is in the combination of good quality materials and rigorous mathematical calculations. The design itself is very simple. The tricky part is putting it together safely from an engineering point of view, practical and effective. Cleaning the aquarium and feeding the fish is very convenient and simple: just press a button and the table top rises. kolenik.com 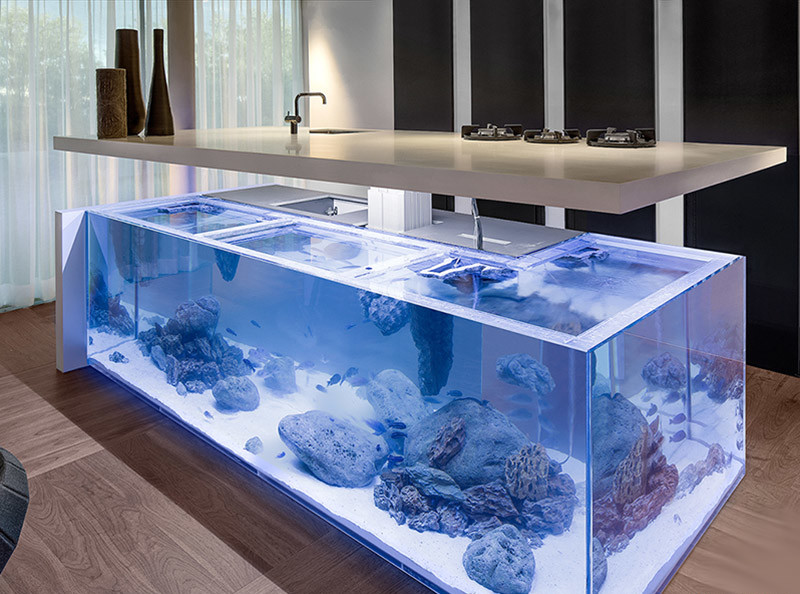 To make the table top light enough for reliable lifting mechanism operation, it was necessary to use artificial corian stone - it allows to reduce the weight of the finished surface. 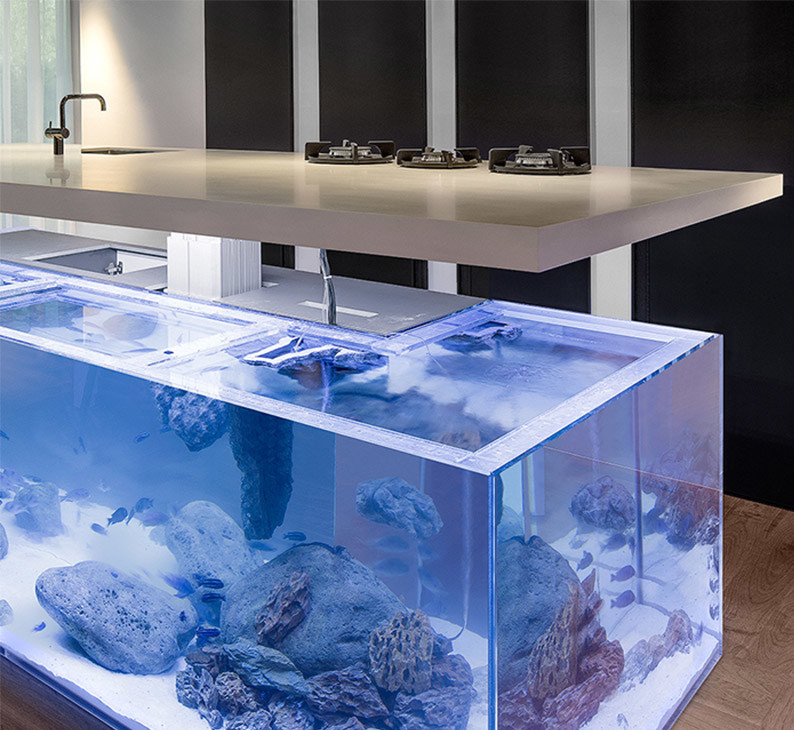 Our opinion: - For all the beauty of the design there are drawbacks. First, the owners will have to keep an eye on themselves all the time and try not to allow strikes on the surface. The tank itself will not break - it is made of tempered thick glass. But the regular vibration that fish can create even weak kicks with their legs is contraindicated. Secondly, the price of the issue. The sample, which you see in the photographs, is about three meters long and one and a half wide and costs 75 thousand euros. 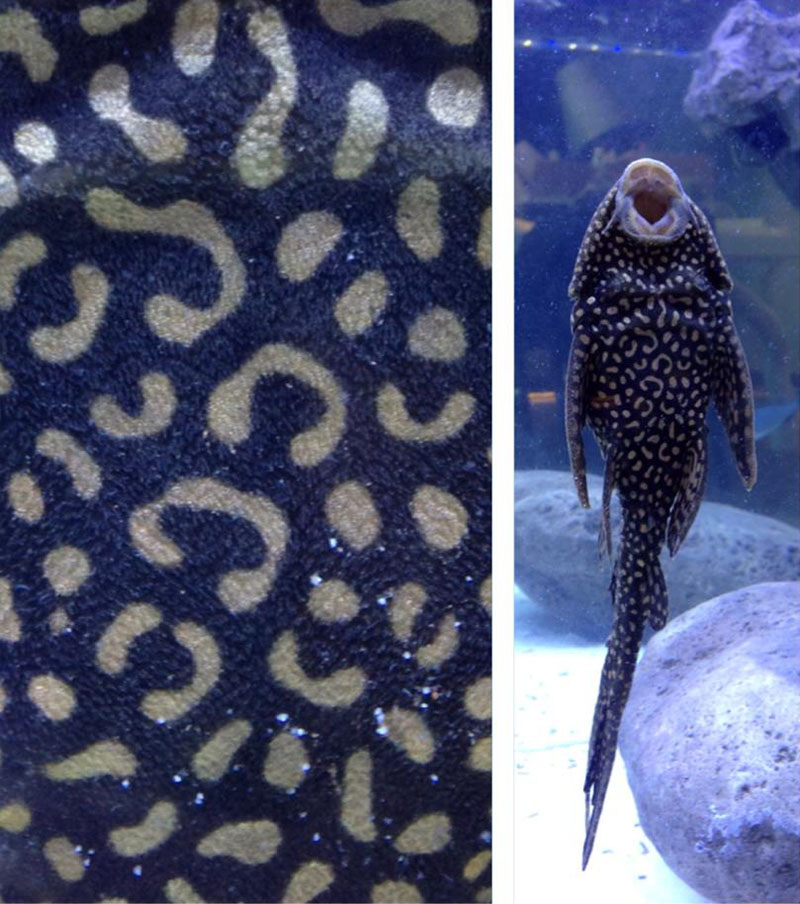 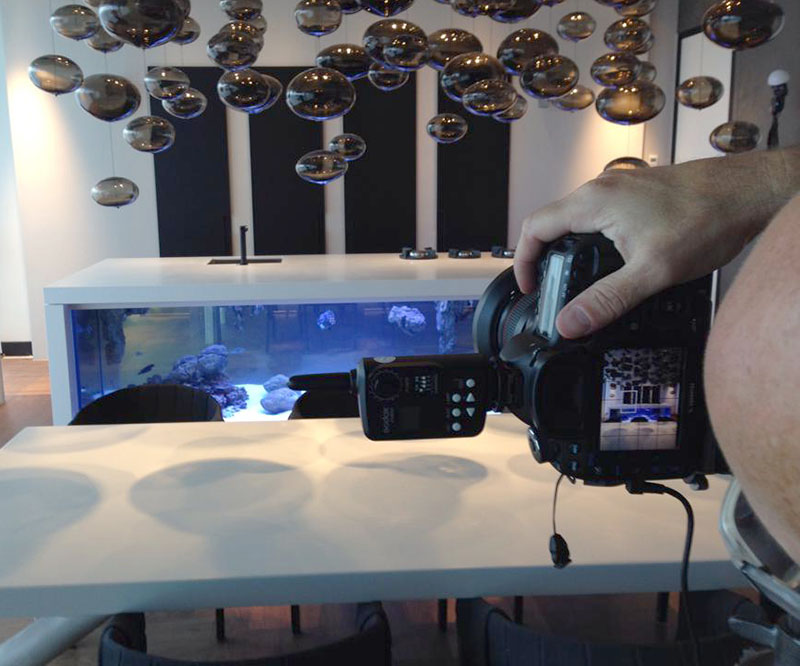 Another fresh trend: aquarium - kitchen apron. In addition to creating a spectacular appearance of the kitchen, such an aquarium is very convenient to maintain. All communications are close, and the tank is easy to equip with automatic water purification systems. 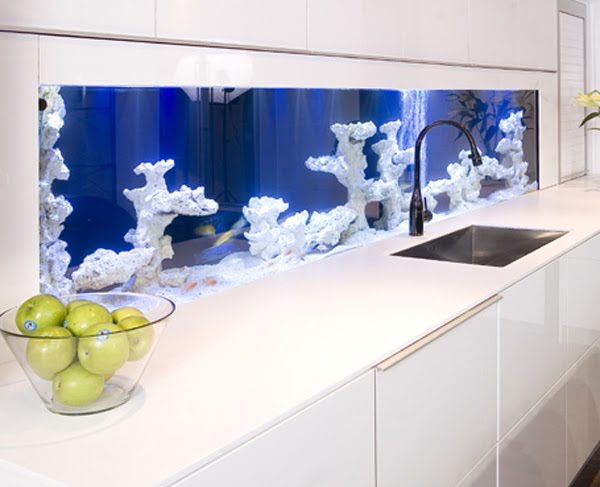 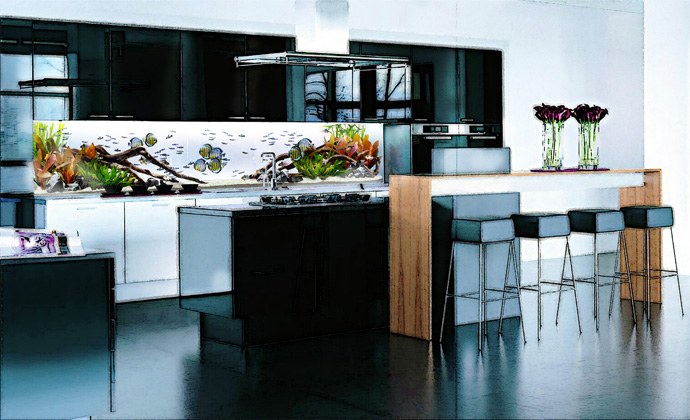 But even here there are disadvantages. Even the most expensive closed-type aquarium should not be placed in the immediate vicinity of the hob and battery. The inhabitants of the aquarium react very sharply to the change in water temperature, and during cooking, quite a lot of heat is released. Open the aquarium set close to the stove and the hood is generally contraindicated - the fat will necessarily fall into the water. Our opinion: - If you want to put the aquarium along the entire length of the kitchen, consider that long tanks should have a fairly large width. That is, you will lose at least 10 centimeters of useful space. Most likely even more. And this can be afforded only by owners of premises with a serious area. Living wall and not only

The most practical solution and one of the mostinteresting in the aesthetic sense - it's an aquarium - a window in the wall or even an aquarium-opening. Modern engineering systems make it possible to make the tank part of the wall. This technique increases the space, creates a spectacular play of light, attracts attention. 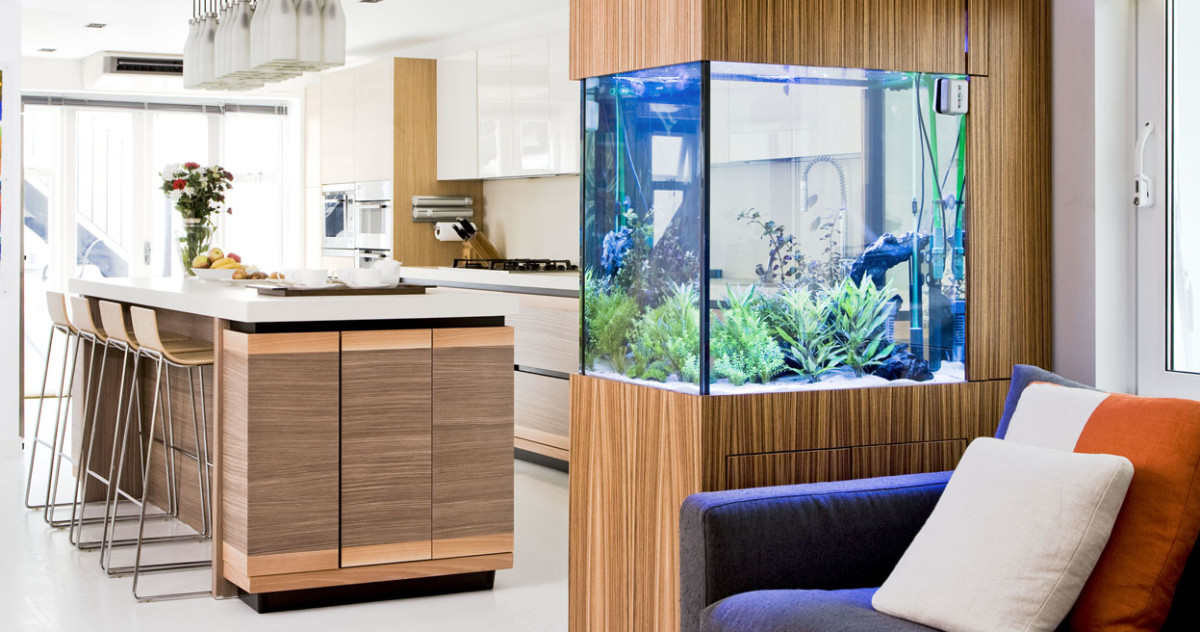 The only thing you should not forget about is lighting. Many fish and algae "on the skylight" will look quite different than in the pet store. In addition, you will need additional illumination and a few expert advice, both on the specifics of different types of aquarium inhabitants and their lifestyle, and on the supply of the design of the cabling for communications. It is better to trust such questions to professionals. 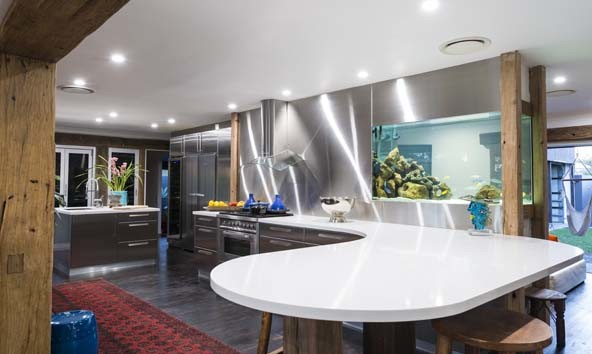 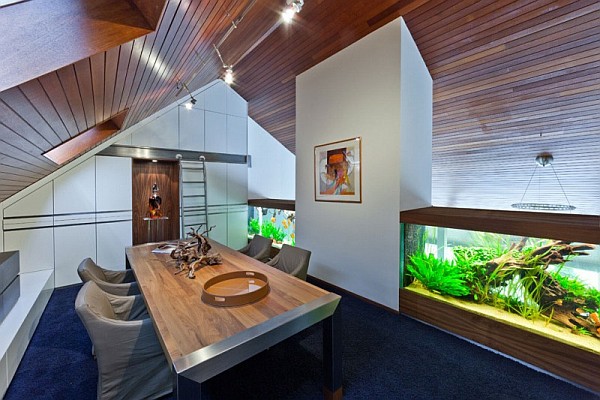