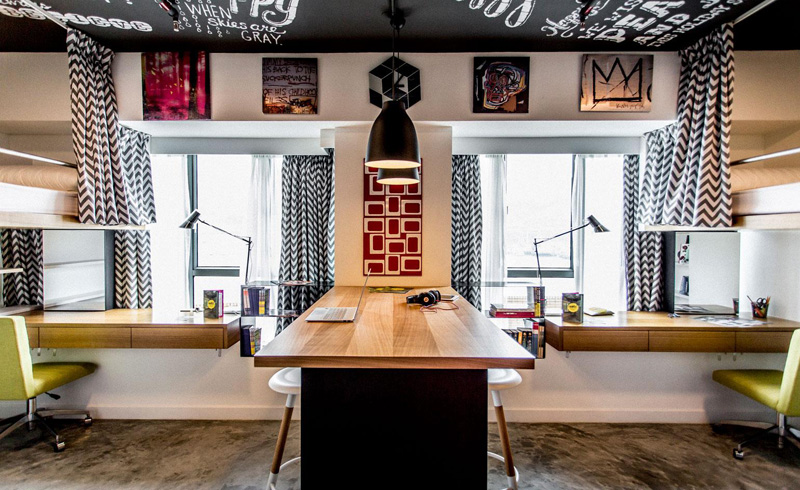 How to place four teenagers in a smallspace? Today we publish an interior from Hong Kong, which uses a variety of solutions suitable for any apartment suffering from a shortage of footage: from voluminous and inconspicuous storage systems to fashionable red accessories. This fun and comfortable student apartment is actually a pilot project of the University of Hong Kong, which set the task design a new type of campus. Student rooms were supposed to preserve a homely atmosphere, but at the same time to show an example of the optimal solution of the problems of minimum areas in large Chinese cities with a high population density. In a word, it was necessary to place four students in an apartment of 27 meters square and arrange it so that they had enough space for rest, and for classes, and for communication. The competition was won by the architectural bureau LYCS Architecture. 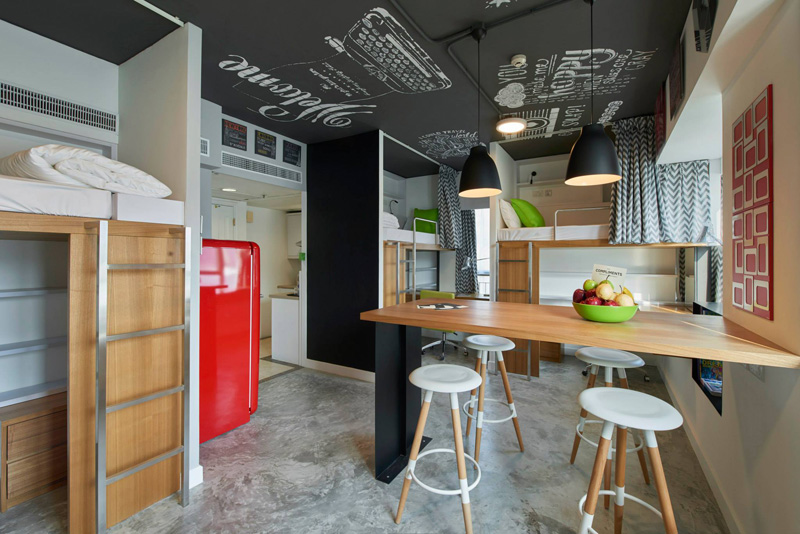 Ruan Hao (Ruan Hao), architect, bureau ownerLYCS Architecture Before building its own architectural office in 2010, Ruan Hao graduated from Princeton University and the Harvard School of Design. He was one of the youngest students in the history of Princeton, who received a master's degree in architecture - he was then just over 20 years old. In China and beyond, he is well known as an architectural critic who collaborates with leading English-language architectural journals. He and his team work in Chinese Hangzhou and specialize in designing energy-efficient public and industrial spaces in the urban environment. The Bureau has repeatedly received the Grand Prix of major European competitions, participated in the Venice Architectural Biennale. lycs-arc.com 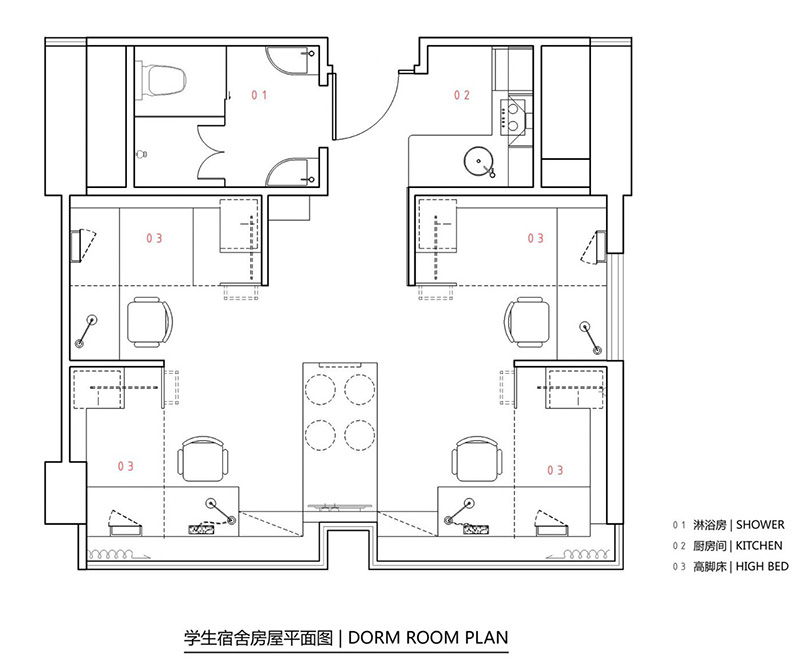 Remove all unnecessary To reduce the cost ofarrangement of the campus, the architects decided not to rebuild the old building of the hostel, but to reschedule the existing apartments. Each had an average of 27 square meters. For a start, which divided the apartment into two rooms. Instead, a large long table was set up just below the bar counter. It is easy for him to place four people and with large plates and laptops. On the one hand, open space promotes communication, on the other - the table still divides the room into two equal parts, leaving each pair of students "own half". 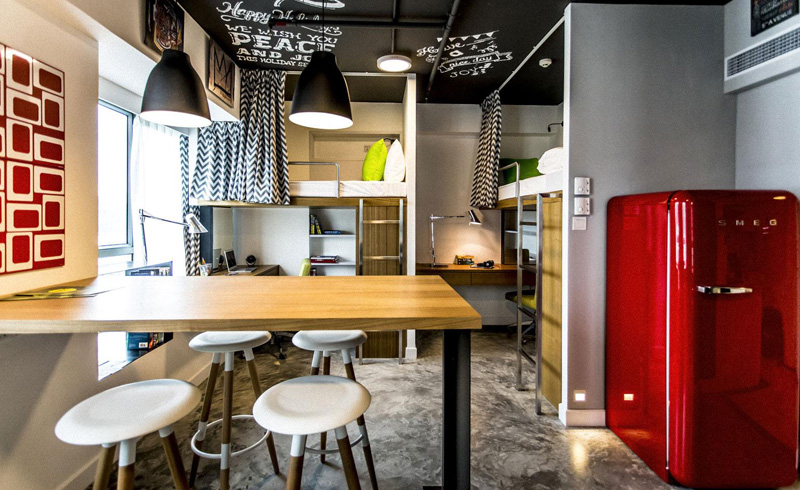 Strict economy Ruan Hao, architect: "In such a limited space, but comfortable." The beds are raised to allow room for small private writing desks and wardrobes for hanging clothes. In this case, the bed itself is in fact the only opportunity for complete privacy. And so they are equipped with special dense curtains-screens that do not allow light, reading lamps and several types of sockets. lycs-arc.com 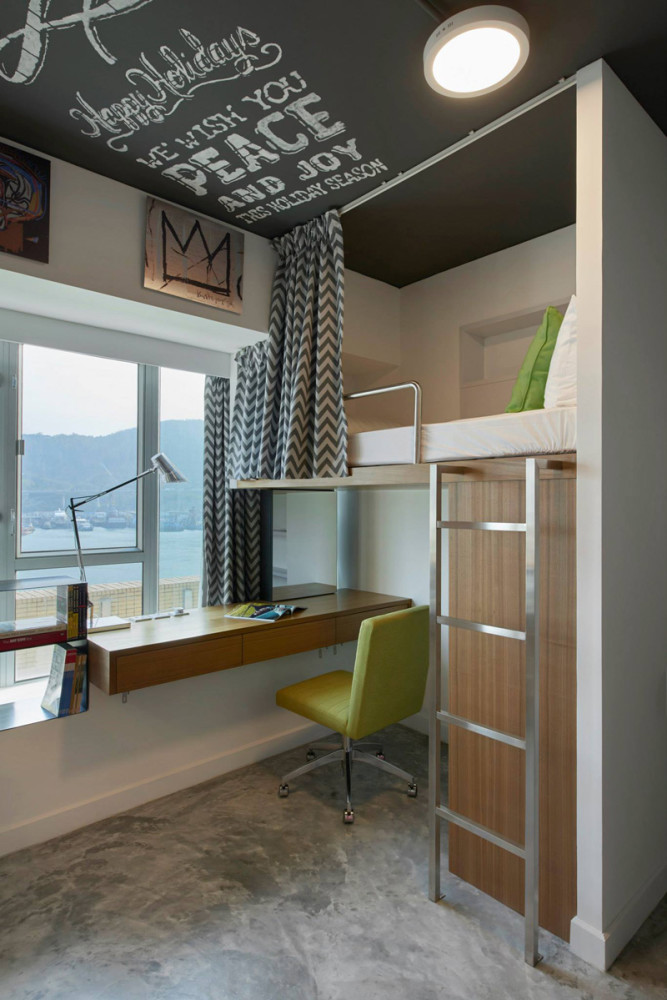 In the piers, between the windows, even above the doorshelves are built in. And at the very floor is inscribed a whole system of lockable drawers, there is a clothes hanger and special chests for voluminous seasonal things and sporting equipment. Bright accents are not an obvious solution for a small space. But in this case very suitable. The black background conceals communications on the ceiling, emphasizes the teenage character of space and creates a good contrast with the white walls. Polished concrete on the floor, using a special treatment imitating granite, is both a cheap and practical solution: a long-term, uncomplicated cleaning and visually interesting coating. 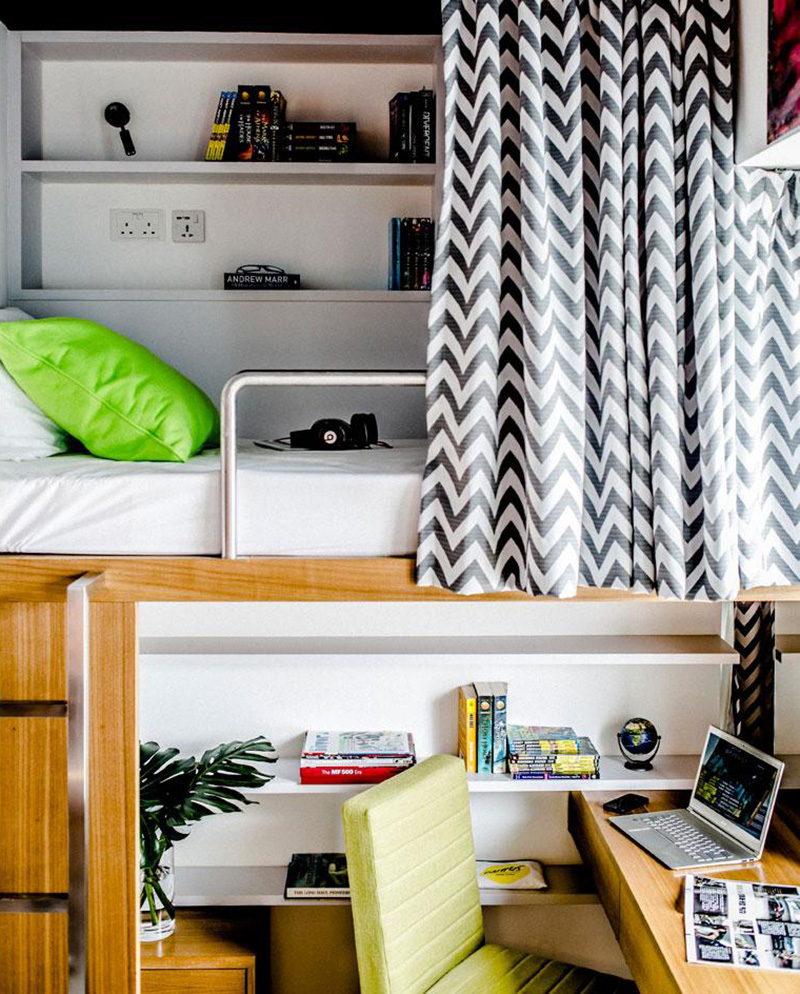 Red accents. One of the main difficulties of small rooms is precise decoration. Add a little more than necessary, and the space will look sloppy, give up the details - and the room will lose any individuality. Funny brick-red elements in this situation - just what you need.

The project of a nice village house with an area of ​​only 36 meters - etk-fashion.com

Unusual house with an area of ​​200 meters - etk-fashion.com

The most interesting from Stockholm Design Week 2016 - etk-fashion.com

How to place everything you need in a small bathroom: ideas and design tips - etk-fashion.com