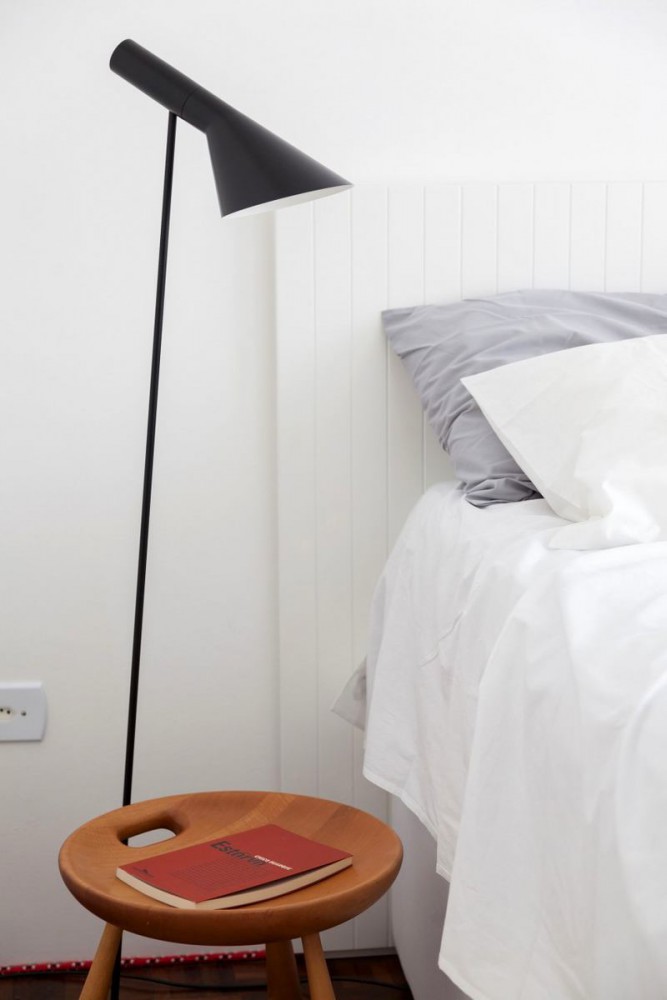 The apartment has an area of ​​30 square meters. m - it's not so much, especially if you are often visited by guests, and you love space. But designers from Brazil have found a solution to this problem. What they have got - read in the article about the snow-white studio for the ballerina This small apartment in the city of Curitiba, Brazil seems something impossible. Having at its disposal only 30 square meters. m, the designers managed to create a unique sense of spaciousness and airiness. However, how could it be done differently, when the former ballerina acted as the customer? The white studio apartment flawlessly repeated the whole idea of ​​the dance, including the simplicity and the greatest professionalism of the ballet. The project was named Água Verde Apartment. The main request of the customer was,so that the apartment has as much space as possible to communicate. The ex-ballerina is very fond of receiving guests, so it was necessary to create the most comfortable conditions for their accommodation. And although 30 square meters. m greatly limited the actions of the designer Leandro Garcia (Leandro Garcia), the result exceeded all expectations. Leandro Garcia is an architect and city planner, graduated from the University of Grand ABC (UniABC). Even at university, he received an incentive prize at the International Competition of Architectural Schools. In his practice - cooperation with the designer of offices Marcelo Rosenbaum (Marcelo Rosenbaum) and the famous architect Isay Weinfeld (Isay Weinfeld). Today, Leandro Garcia own agency dealing with the architecture and design of residential and commercial premises, as well as furniture design. leandrogarcia.com.br Of course, the main accent in the creation of the project Água Verde Apartment was made. And thanks to this, the entire space of a small studio acquired the airiness inherent in ballerinas. The greatest change was in the living room, whichdesigners have tried to combine as efficiently as possible with the dining room. By the way, it became possible thanks to the very original table Camelo (1998) from Ovo (Luciana Martins & Gerson de Oliveira). It has a mechanism that regulates the height of the table top, so that it can be used both as a coffee table and a dining table. The kitchen in Água Verde Apartment is located inA small niche and facing the front of the living room. She has everything necessary to make the former ballerina cook food not only for herself, but also for large companies. By the way, according to the architect's idea, a mirror over the top, which performs the role of an apron, should. We think this idea should be taken into account to all the owners of small apartments. Next to the kitchen niche are the bathroomand laundry, which are also made in white. Well, this gives small rooms a property of unlimited space. And in the case of our apartment this is very important. The idea of ​​creating the effect of space is supported andelements of decor. , a sofa without side details and an absolutely white wardrobe that separates the bedroom from the living room - all this creates a feeling of airiness and lightness. Another reminder of the vocation of the owner of the apartment. By the way, the white wardrobe takes up most of the roomand is a kind of portal to the bedroom. You can get into it through a sliding door, which also saves space. The bedroom continues the baton of the basic idea of ​​white color and a visual increase in space. Therefore, you will not see bright elements in it, except for a black strict lamp and an original wooden coffee table, which gives the room a cosiness. Project of the week: the impossible is possible! 25-meter apartment

A delightful Parisian apartment of only 25 meters - etk-fashion.com

The apartment is 29 meters high, where everything is there - etk-fashion.com