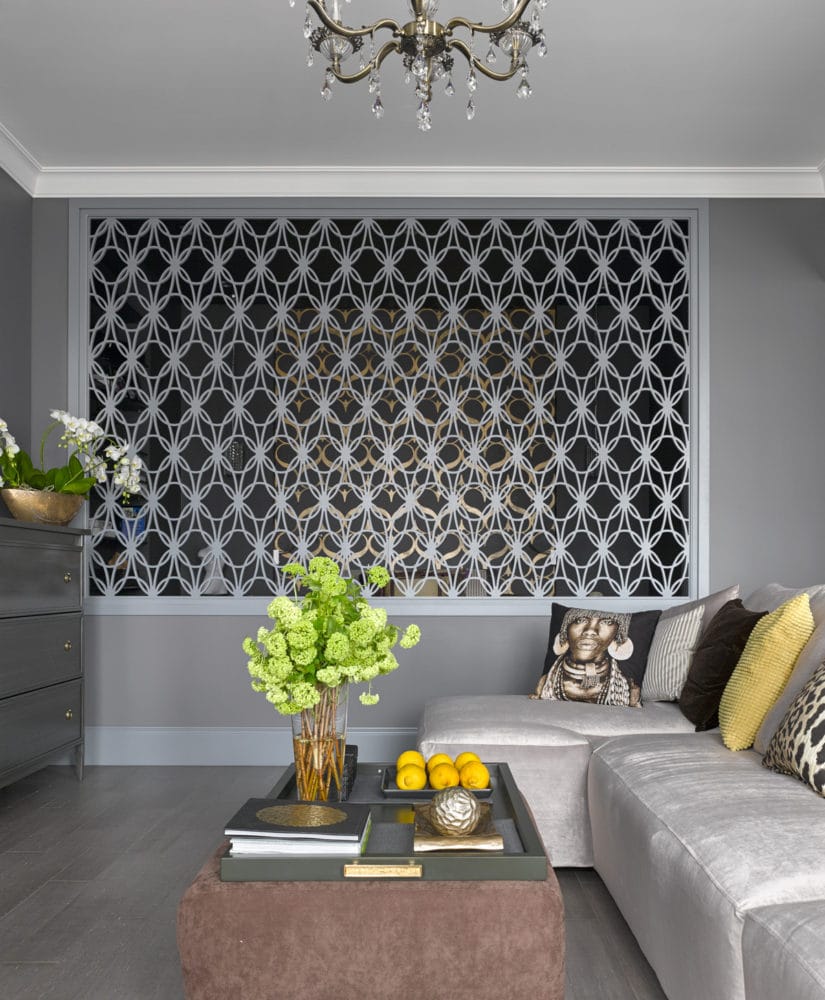 Fully insulated bedroom in one-roomapartment for many seems something unattainable. However, the authors of this project proved that the impossible is not only possible, but also looks more than attractive

Before a small apartment of 56 square meters. m "fell into the hands" to the designers Oksana Stanislavova and Alena Dzutseva, there was only one room in it. But since one of the priority desires of the customer was a separate space for sleep, the designers had to organize an isolated room, without affecting the kitchen area. It was also necessary to solve the problem with the windows, because even though the area of ​​the apartment and allowed to design a separate bedroom, but the number of windows - no. This was a prerequisite for creating an openwork wooden partition through which natural light and air easily penetrate. SODA Home Décor

SODA Home Décor is Oksana Stanislavova, a former lawyer, and Alena Dzutseva, international master of sports in softball, together they graduated from the school-studio "Details".

- We consider it most important to do everything with love,then paint, light, air, textures will create for the owners an atmosphere of happiness and joy. Create beauty and do something special in the interior for a specific person without love impossible. Therefore, SODA Home Décor was born. sodahomedecor.com

A distinctive feature of the project was theThe use of dark colors, which is very fond of the customer. But as the main color in the interior was chosen noble gray, which successfully combines with the shades of silver, gold and bronze. And that the space was not too dark, the designers complemented the interior with warm colors of furniture in the form of a light sofa in the living room, a "gold" panel above the head of the bed and a bright green chest in the hallway. The openwork partition made by the company "Art-ultra" is also painted gray with Italian paint Sayerlack. Despite the large amount of gray in the interior, different shades were used, so that no one overlaps the other. The floors in the apartment are made of bamboo flooring. 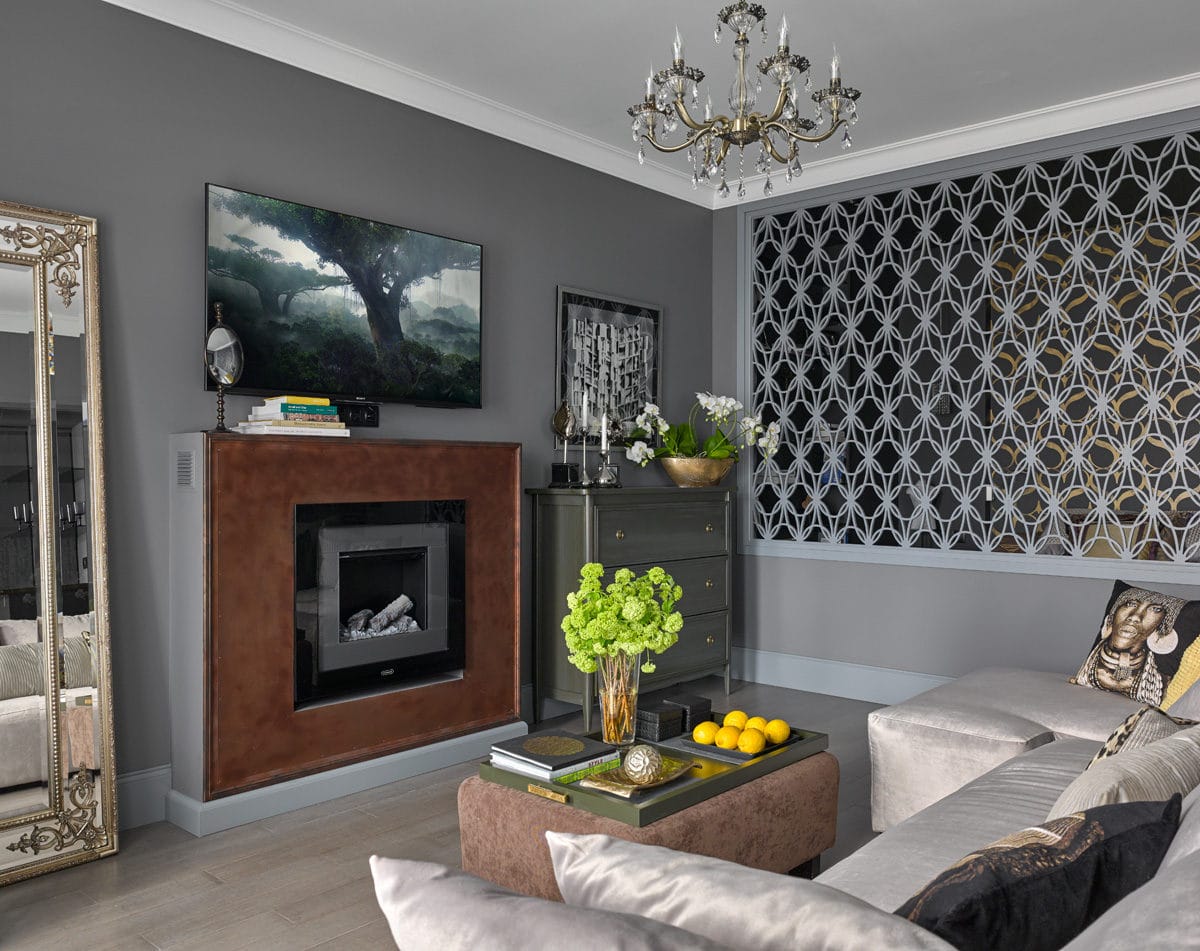 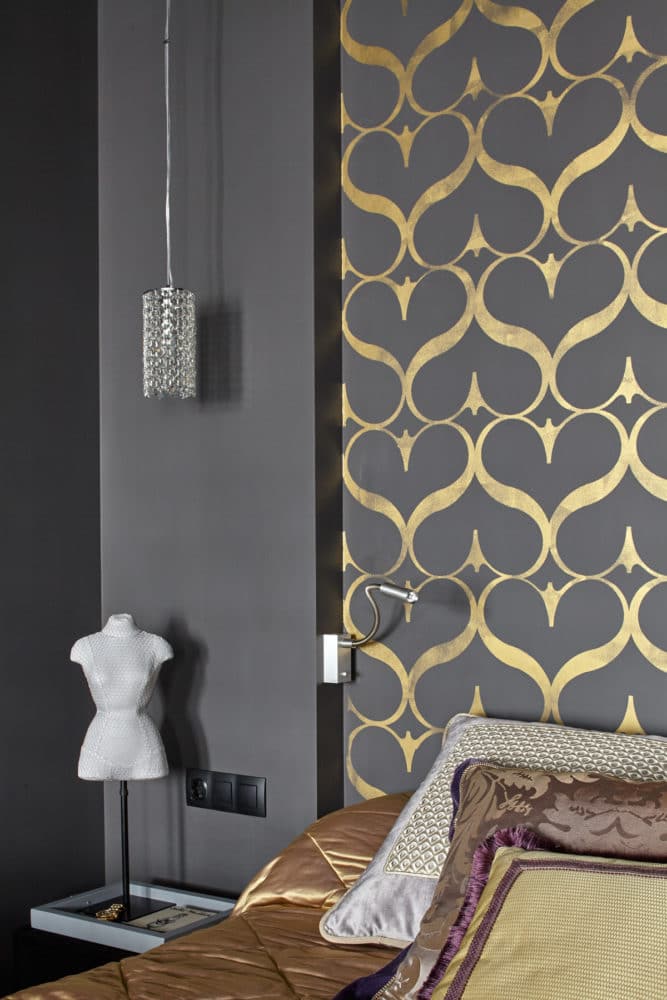 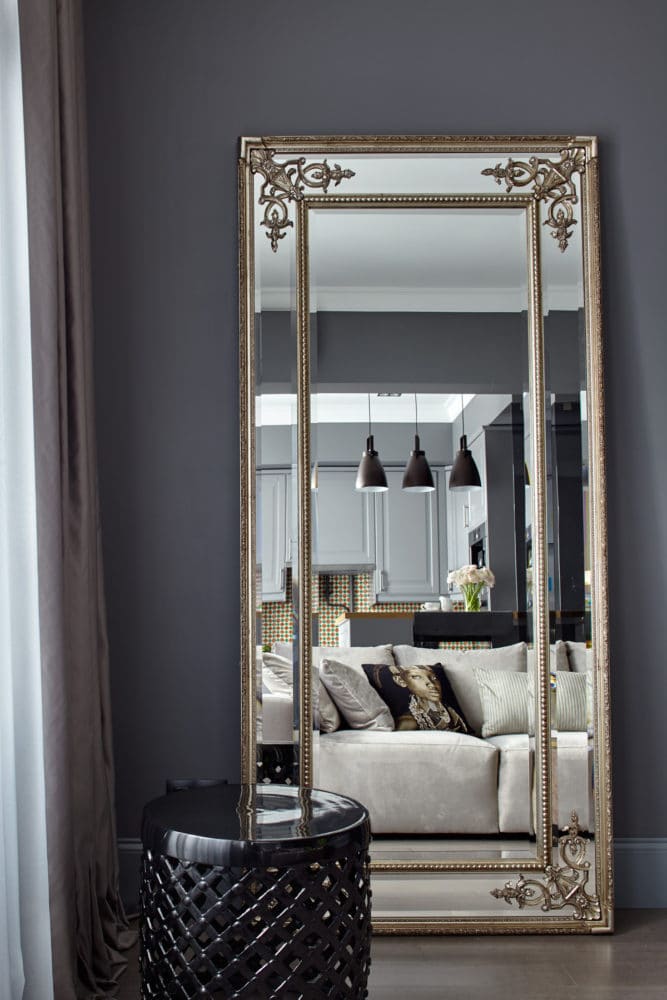 A big role in the interior was played by pieces of furnitureand hand-made decor, made to order. The living room is decorated with an electric fireplace, the metal finish of which was done by the designers themselves. The corner velvet sofa was purchased in Boconcept, the pouf from the former interior now replaces the table, on which stands a tray, made by SODA Home Décor. Pillows on the sofa with an African pattern the designer brought from the exhibition in Paris. The walls of the living room are decorated with paintings: serigraphy (1977), Louise Nevelson (1899-1988) and Pace Columbus from the flea market. The interior is complemented by a Tamano mirror and chest of drawers, manufactured by SODA Home Décor. 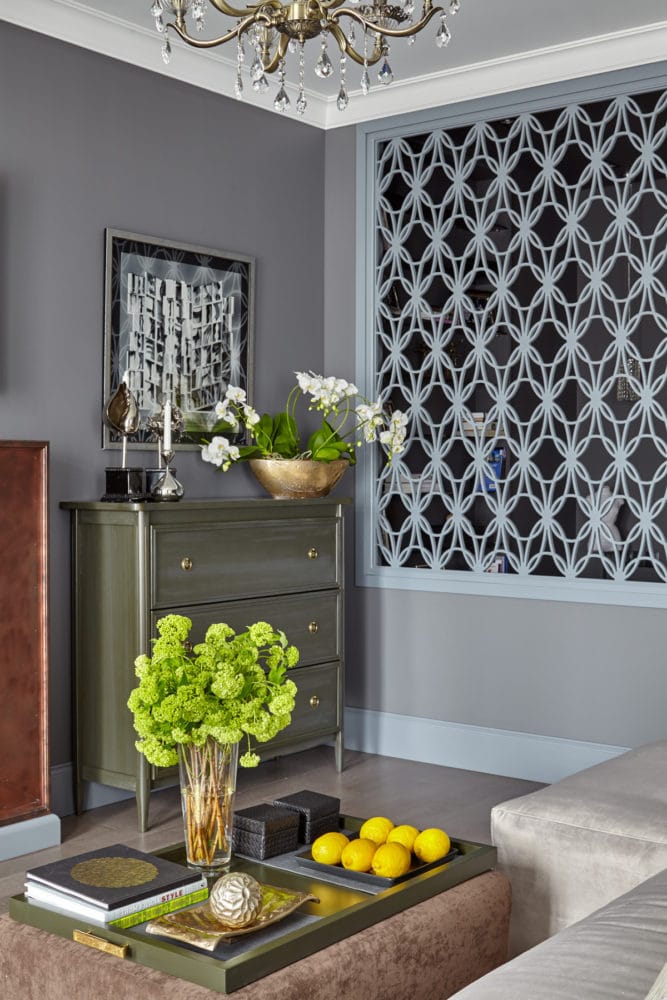 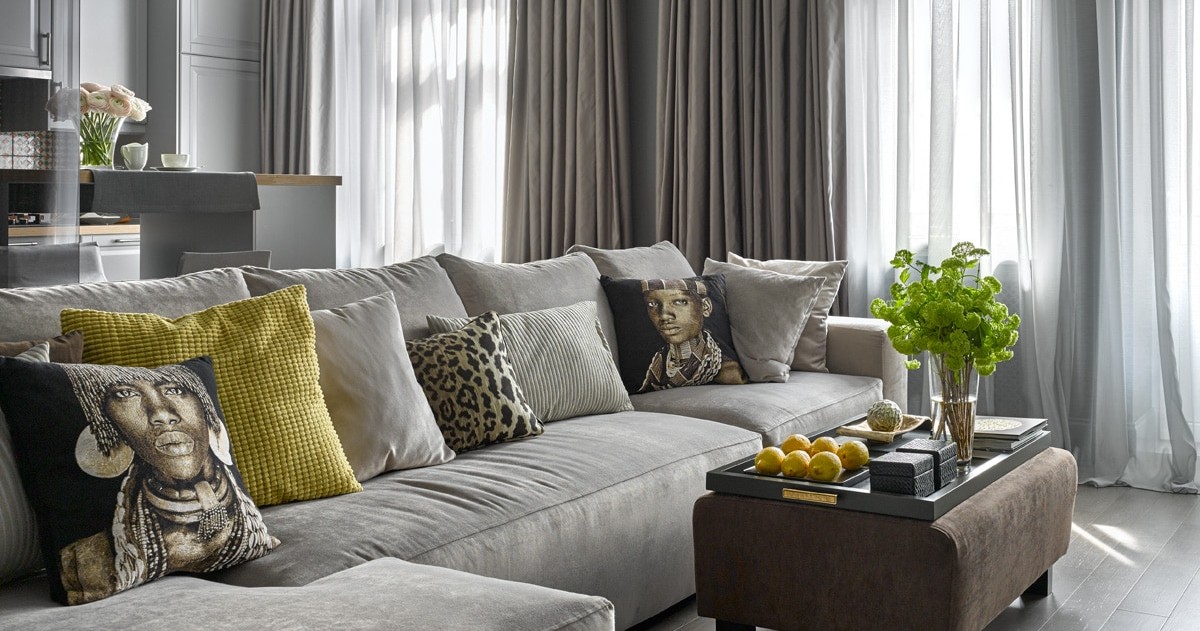 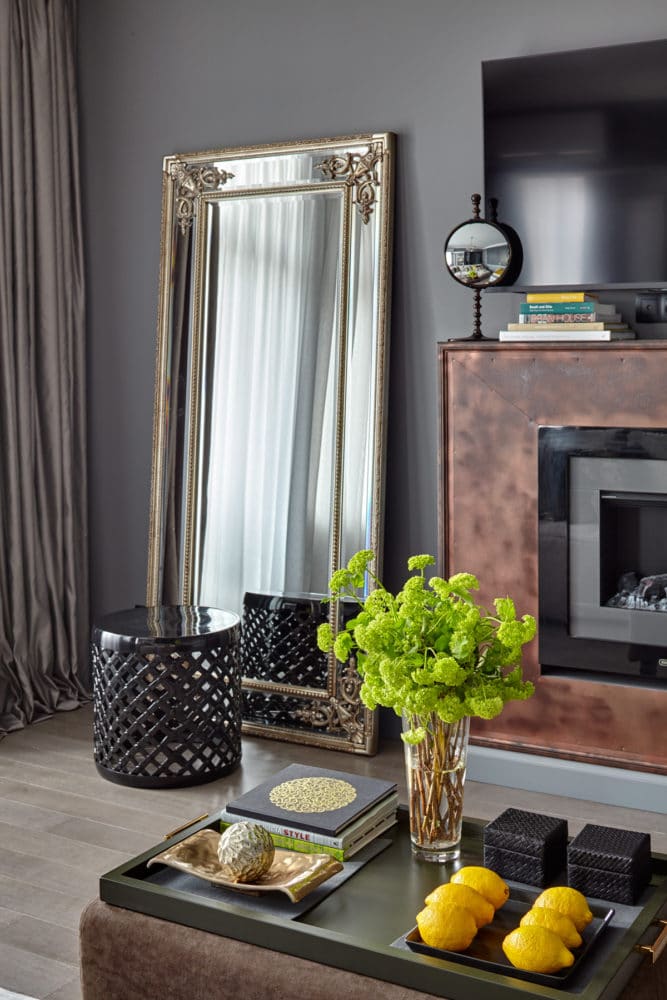 The sleeping area was decided not to clutter up the traditionalbed and in return made a podium and put a mattress on it. Instead of thumbs were put velor pouffes, and on them - trays SODA Home Décor. For completeness, the ceiling in the room was painted in the color of the walls, and the head of the bed was decorated with a hand-painted golden painting. 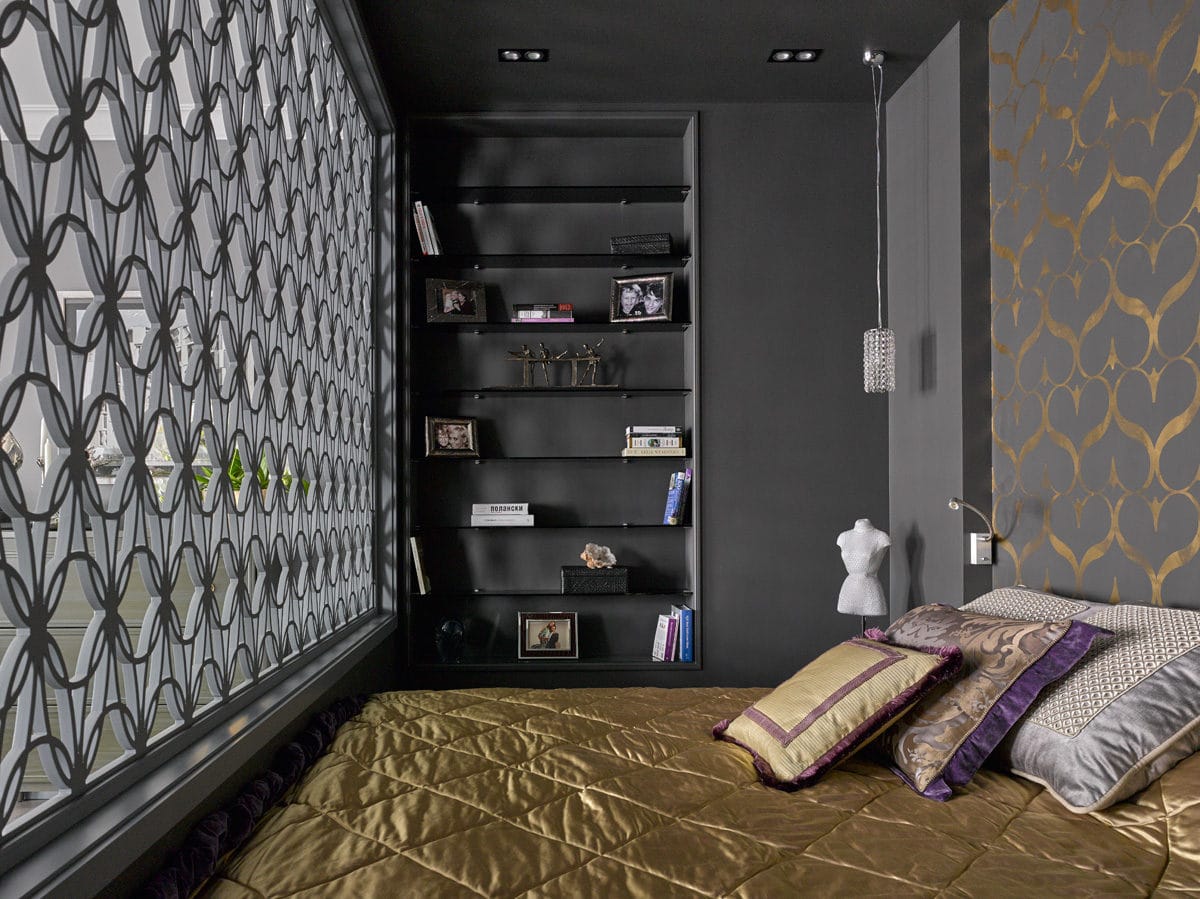 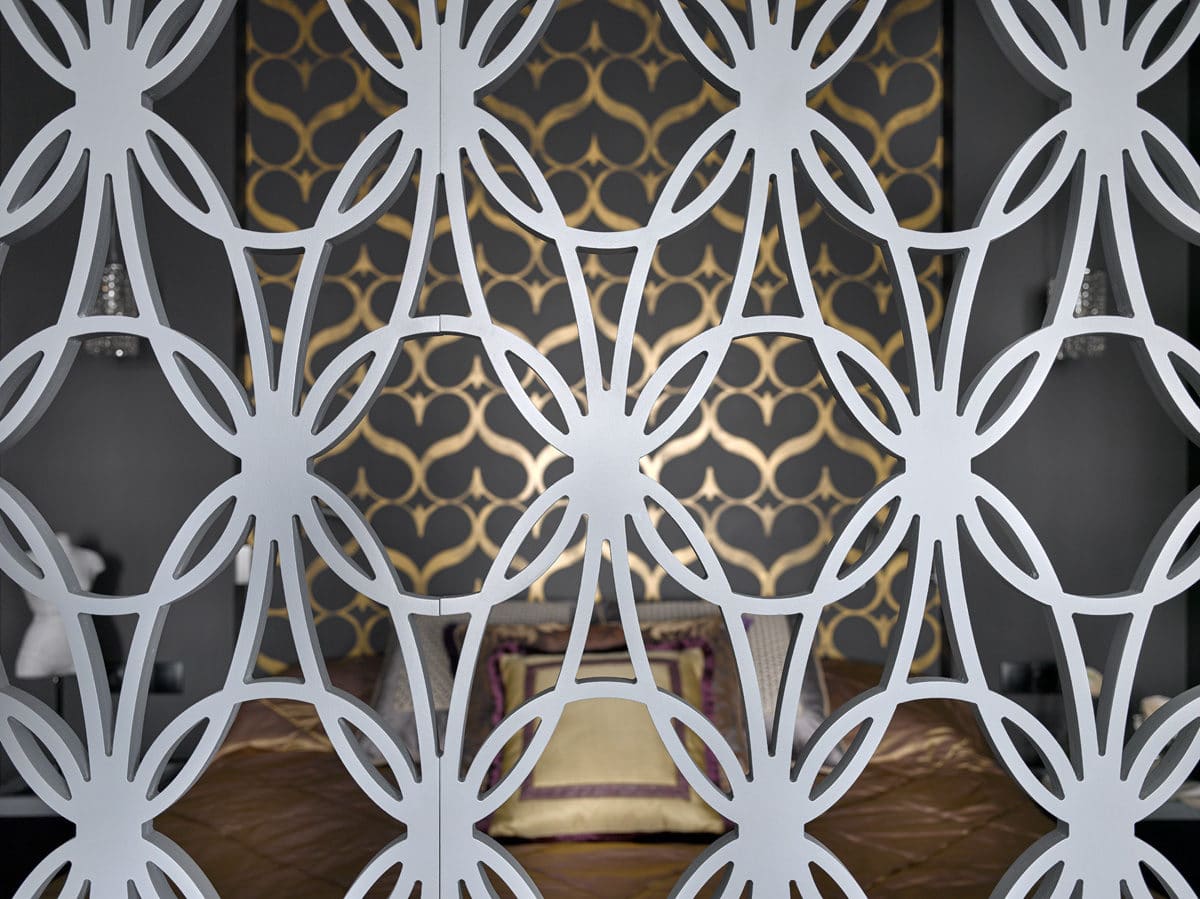 Because the customer did not want to share spacekitchens for the organization of a new bedroom, everything was left as it was, but after the renovation the kitchen has become even more functional. The bar counter serves as a dining table, while the shelf provides shelves for storage. IKEA furniture is decorated with hand-painted Marrakech tiles in Tunisian style. On the bar stools Boconcept, which remained from the previous interior, the designers put on linen covers of gray color. A glass partition was made to order. 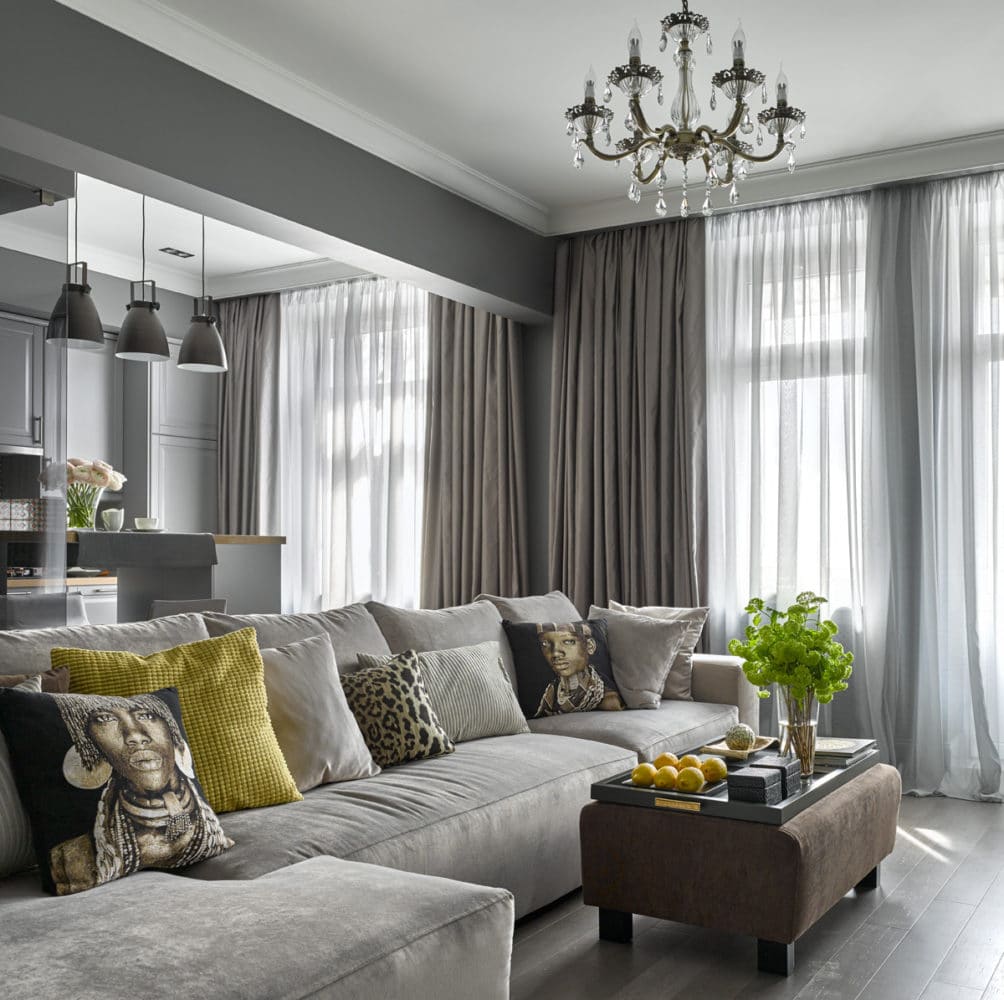 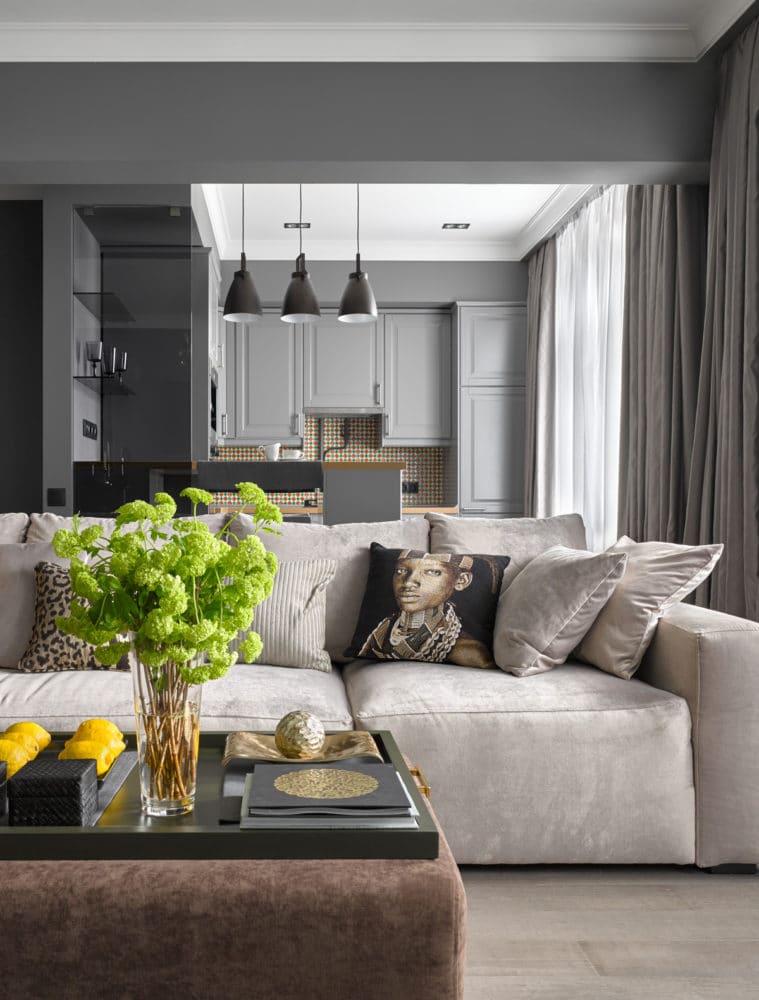 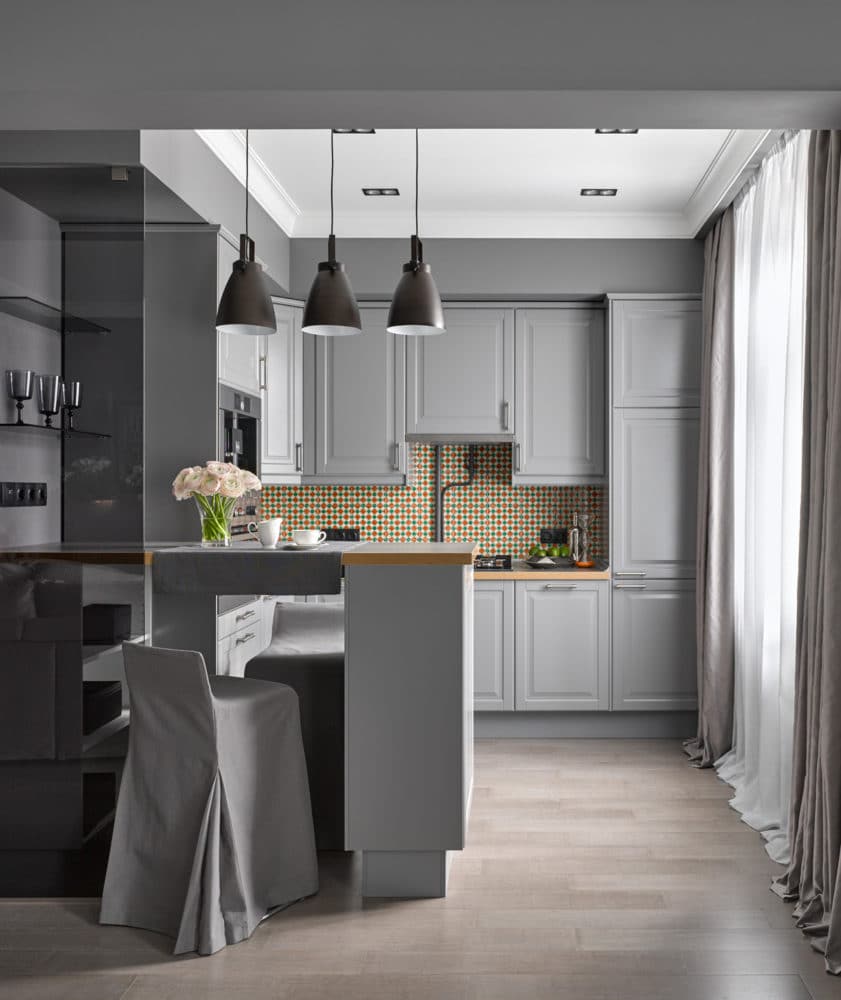 The darkest, and at the same time,the whole apartment is a bathroom, where even the ceiling is painted in black light. A mirror with a frame of gold color was made by order of designers, and a lamp brought from Paris, was an excellent addition. 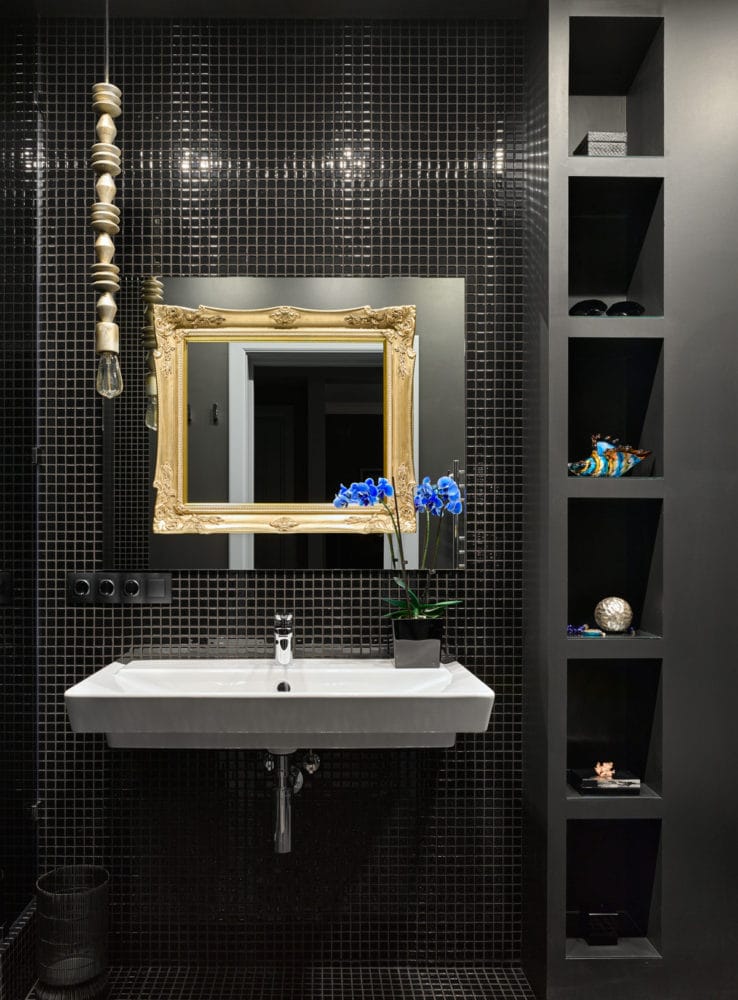 Complexity in the project was a complex lay-outhallway and corridor. The ceiling cut a carrying bolt, which visually disappeared, as it was painted in the color of the walls. The designers applied the color solution and decorated the opening that connects the hallway and the corridor. The opening with niches was painted in bright green, which perfectly matches with graphite. A green chest of drawers, a gray cube with malachite handles from SODA Home Décor and a mirror were made according to sketches of designers. Opposite the cabinet hangs the lithograph of Friedrich Geiler (1946-2013). Also, one of the walls of the hallway is covered with wallpaper with a geometric pattern. The light is from the Roombox. 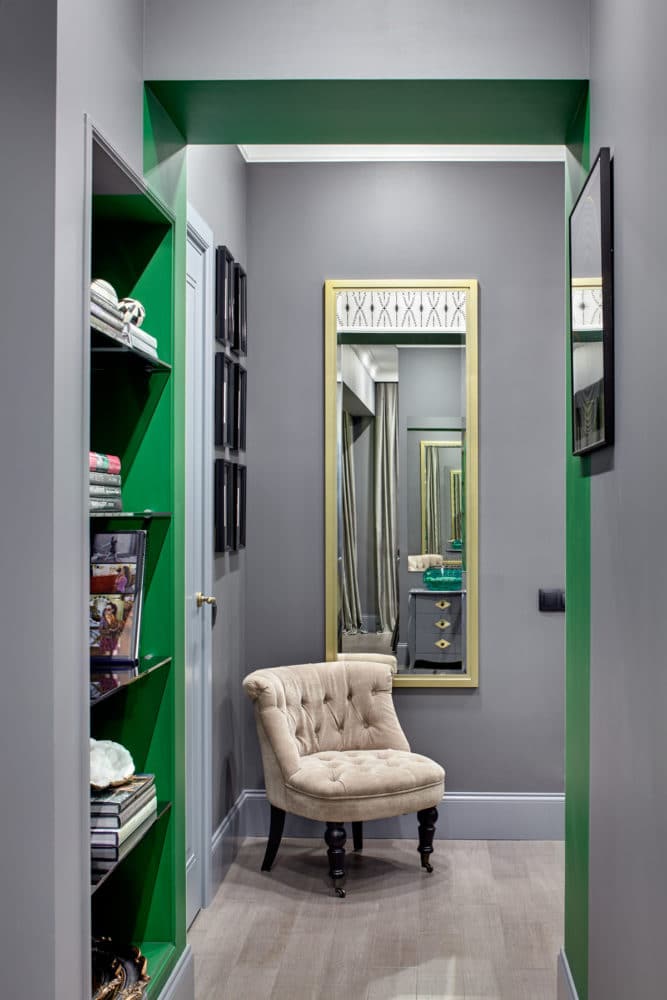 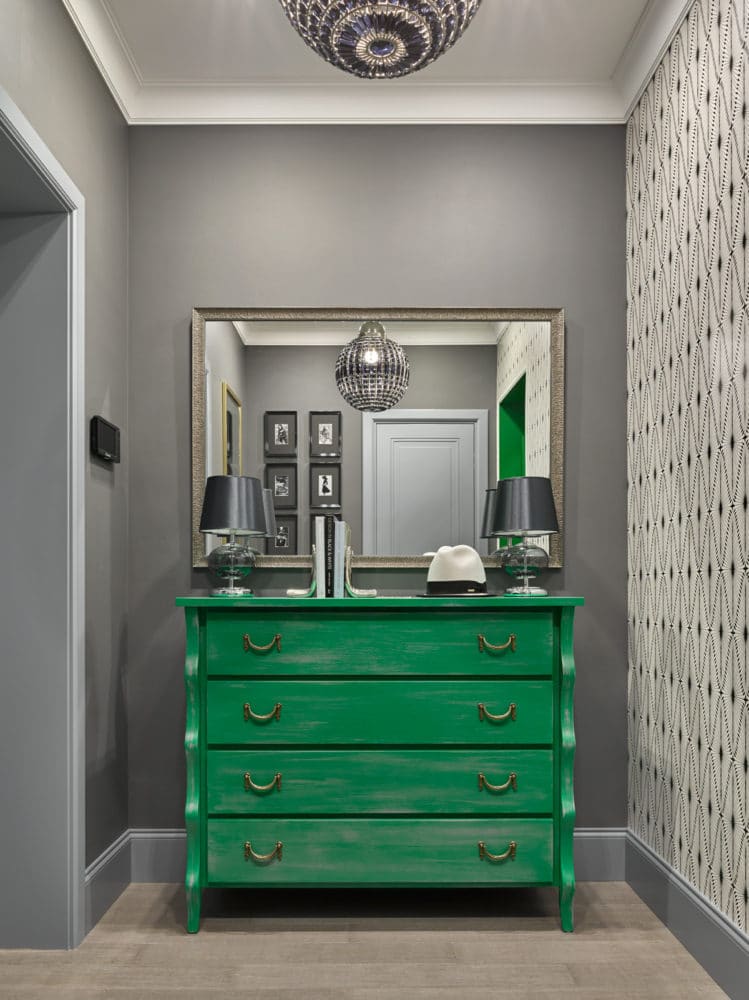 Despite the fact that the interior is dominated by darkcolor, due to the warm shades of furniture and decorations, the apartment was cozy and bright. The customer completely trusted the designers and was very pleased, because it turned out exactly what she dreamed of. 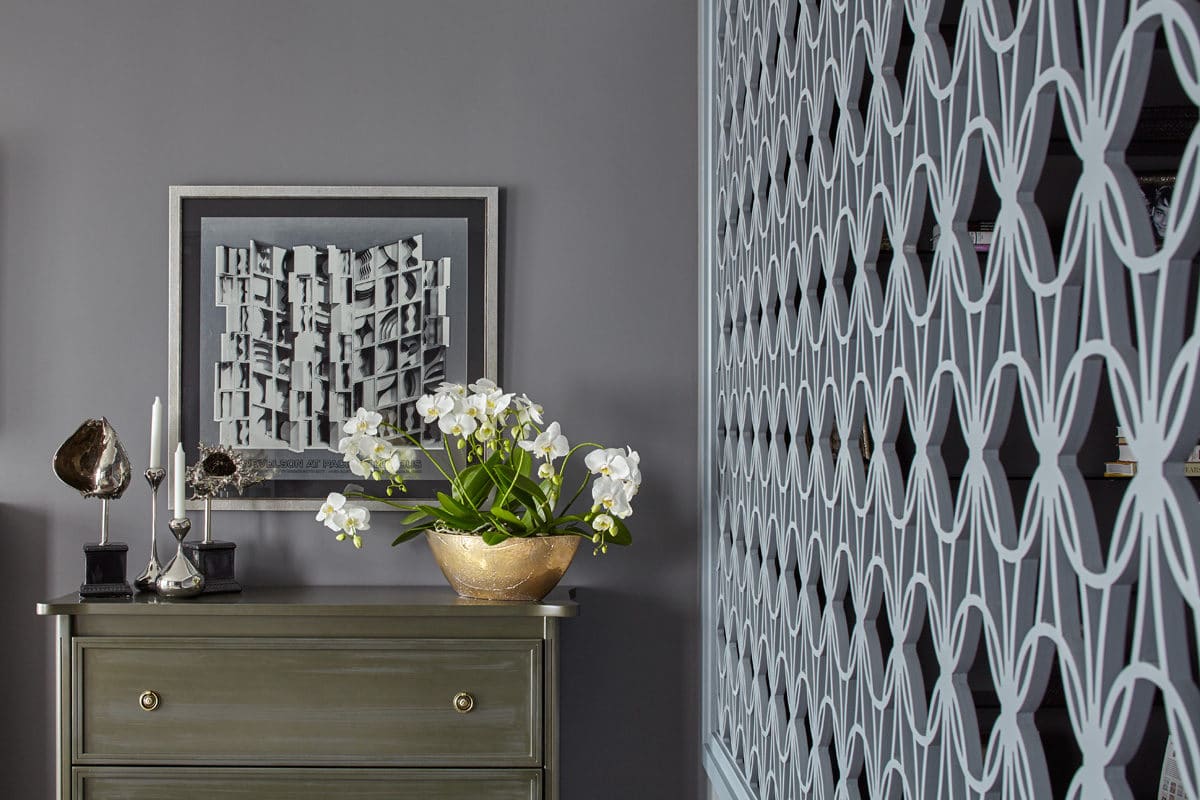 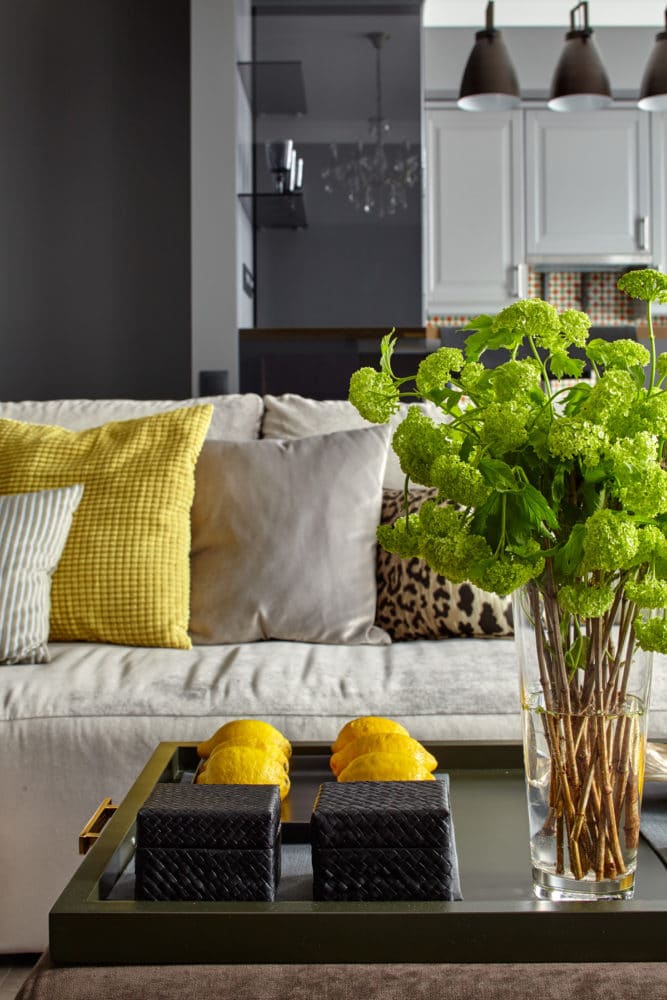 Stylish apartment in Moscow with a panoramic view of the city