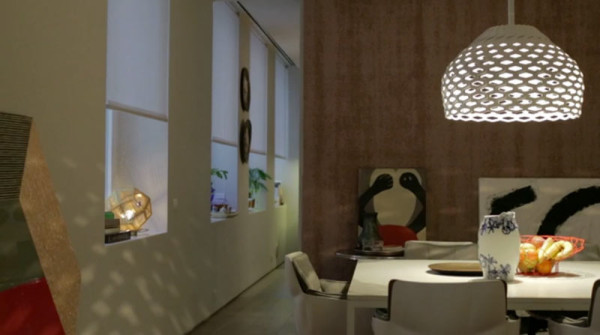 In anticipation of the exhibition iSaloni Moscow 2015 (14-17October), we recall all the most interesting, shown at the same exhibition in Milan. Especially for the readers of etk-fashion.com, the editor-in-chief of the portal Oksana Kashenko interviewed the famous designer Patricia Urquiola who created an unusual collection of glass furniture for Glas Italia and laid the beginning of a new trend of the season - translucent furniture, casting pink color. Blinking - so she named her collection for Glas Italia Patricia Urquiola (Patricia Urquiola). Tables, consoles and shelves change coloring like a chameleon, depending on the lighting and position of the viewer. The rays of light, refracted, create dozens of shades and halftones. As a result, the objects seem to be weightless and transparent, then dense and brightly colored. An unusual technical find is complemented by a laconic modern design with. The novel has become a real one in Milan, although Patricia Urkeola herself admitted to editor-in-chief of etk-fashion.com Oksana Kashenko that the decision to cooperate with Glas Italia was not easy: she still considered glass uncomfortable material. Patricia Urquela, designer and architect Spanish native and Italian in spirit, Patricia Urquiola is one of the most sought-after specialists in Milan, the city she chose for life and work. Love for Italy, Patricia inherited from the famous teacher, the famous Italian architect Achille Castiglioni (Achille Castiglioni), who is considered the "father" of modern Italian design and who in the late 80s Patricia defended her diploma in the Madrid Polytechnic. In the 90's she worked for De Padova and together with Vico Magistretti she created designer furniture: Flower, Loom sofa, Chaise and Chaise Longue. After the furniture, there was a period of architectural design - decoration of showrooms and restaurants. In 1996 Patricia Urkeola became the head of the project group Lissoni Associati, working for Alessi, Cassina, Kartell and other well-known brands. Patricia Urquela's works were selected for the 2001 Italian Design Exhibition and for the Intenational Design Yearbook in 1999 and 2001. In 2001, Patricia Urkeola was the chairman of the jury for the 19 th CDIM Design Award and lectured at the Domus Academy. Now Urquela works in her own studio in Milan and creates both industrial design items and private apartments. We found Patricia in her decorated Santoni shoe boutique. patriciaurquiola.com 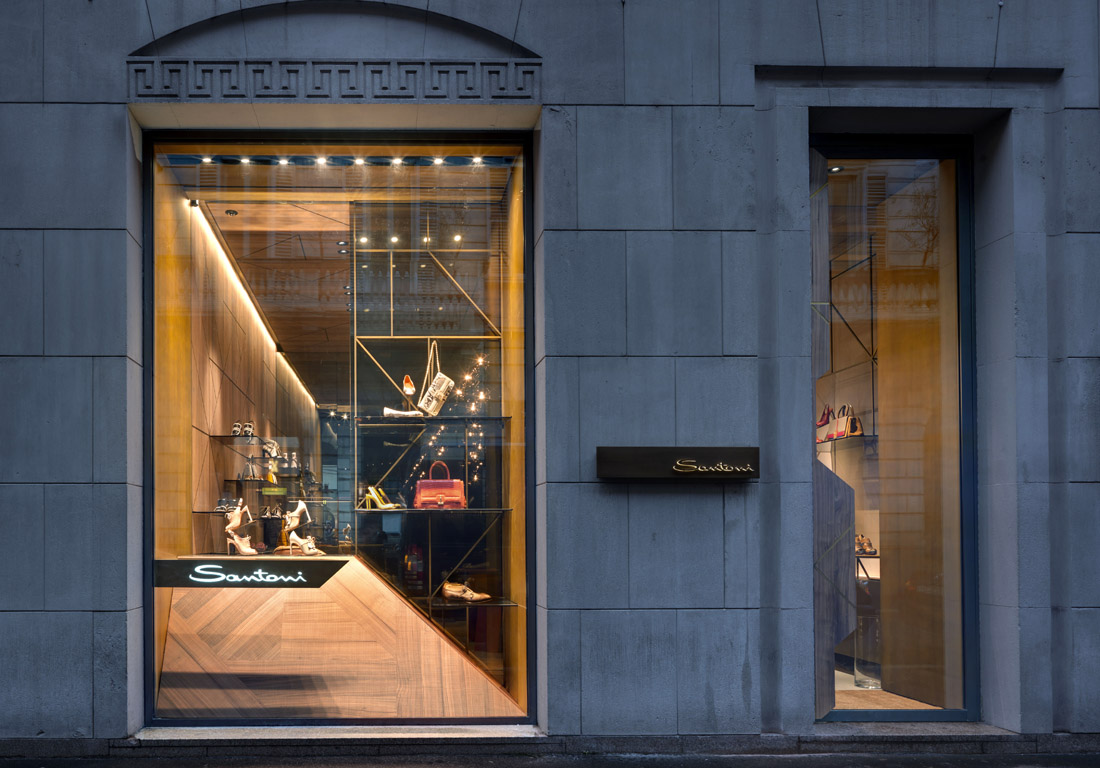 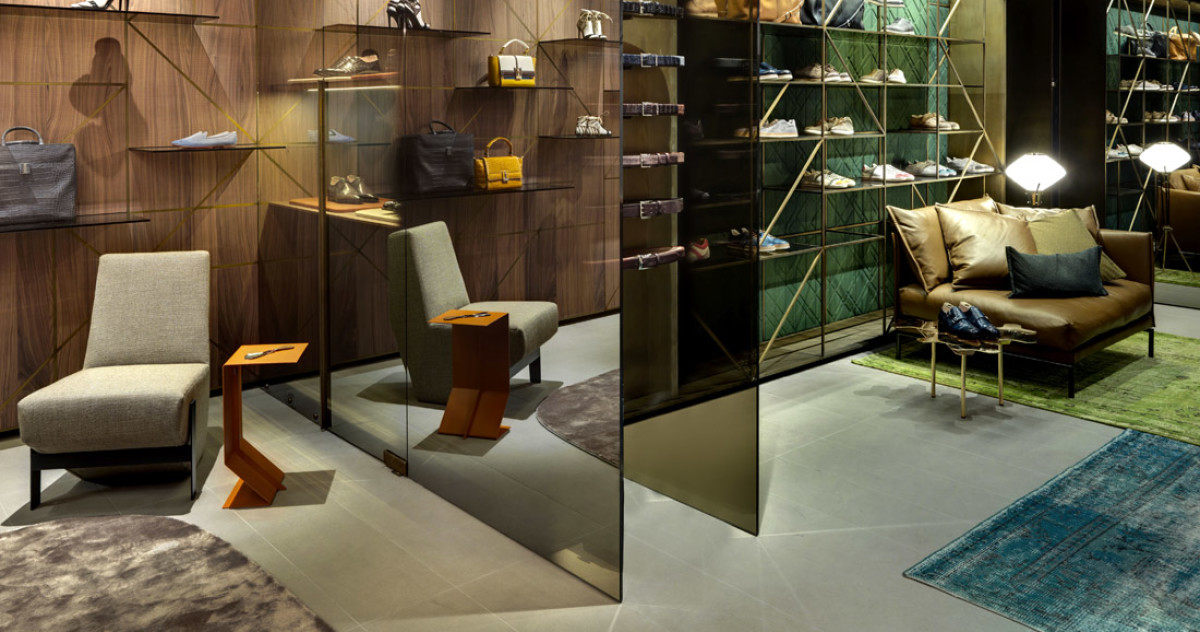 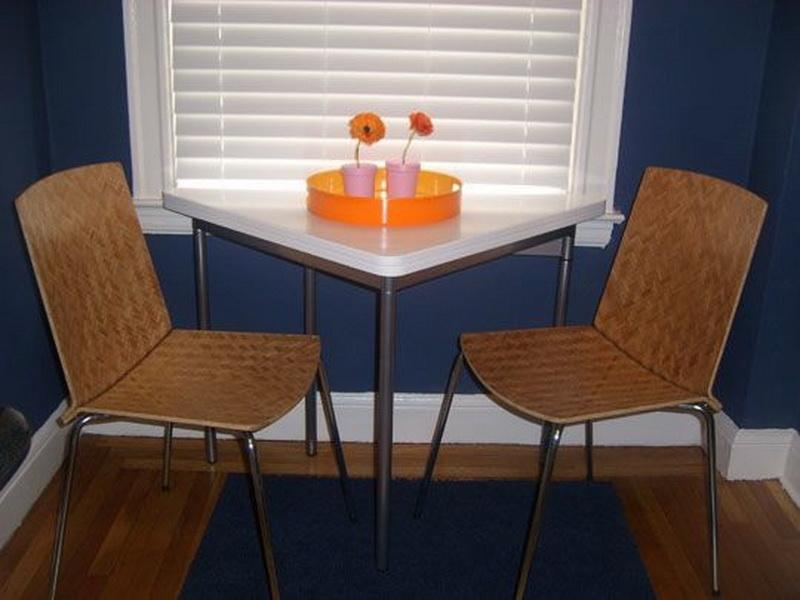 , boutique Santoni, Milan - - Patricia, boutique Santonibecame one of the symbols of modern Italian design, and in many respects due to your design. Tell us a little about this space. - This is one of your favorite projects. He really is very Italian in spirit, because I wanted to convey my pride in the traditional craftsmanship and the highest quality, which at the same time looks to the future. On the one hand, it was necessary to make the hall innovative and interesting, on the other hand - meeting the needs of people who will work in it every day, display their wonderful shoes and so on. That is, the space had to be exhibition and comfortable at the same time. And one more thing: Santoni started out as a brand of high-class men's shoes, so their company still has a very manly spirit. And I also wanted to keep it as a peculiarity, style of the company. And from here appeared the openness and transparency of the interior, to which I added a little of my favorite geometry - by arranging vintage furniture items, my own objects, carpets and, most importantly, clear lines of light shelves and racks that are attached to a modular brass net. In fact, the task was not so difficult - it turned out that we have very similar tastes with Santoni. 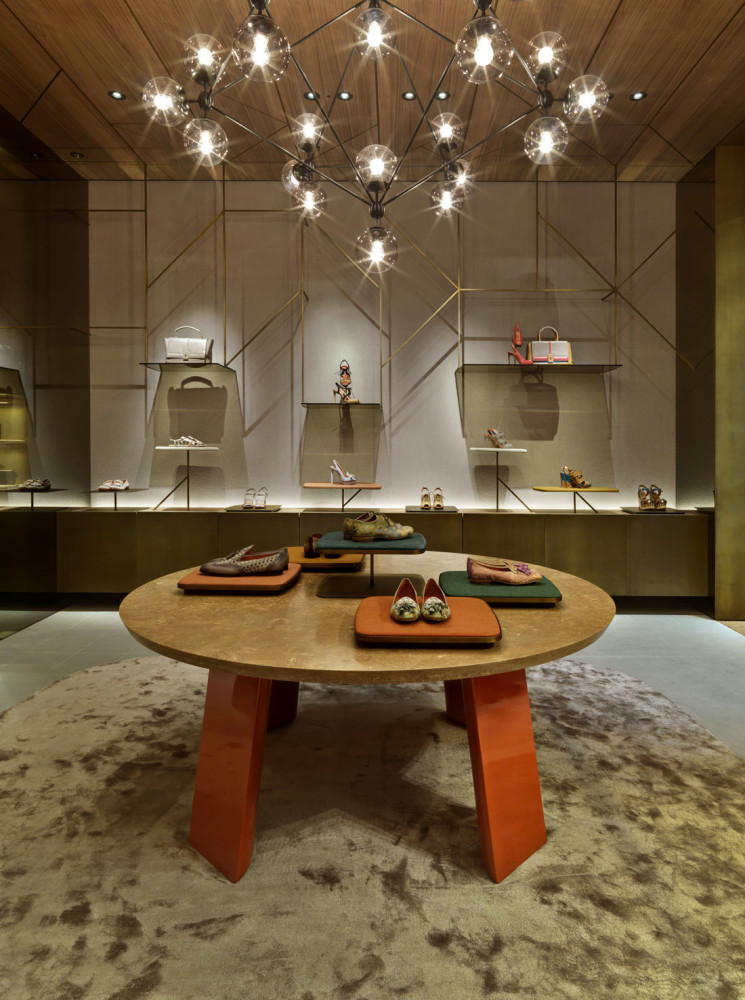 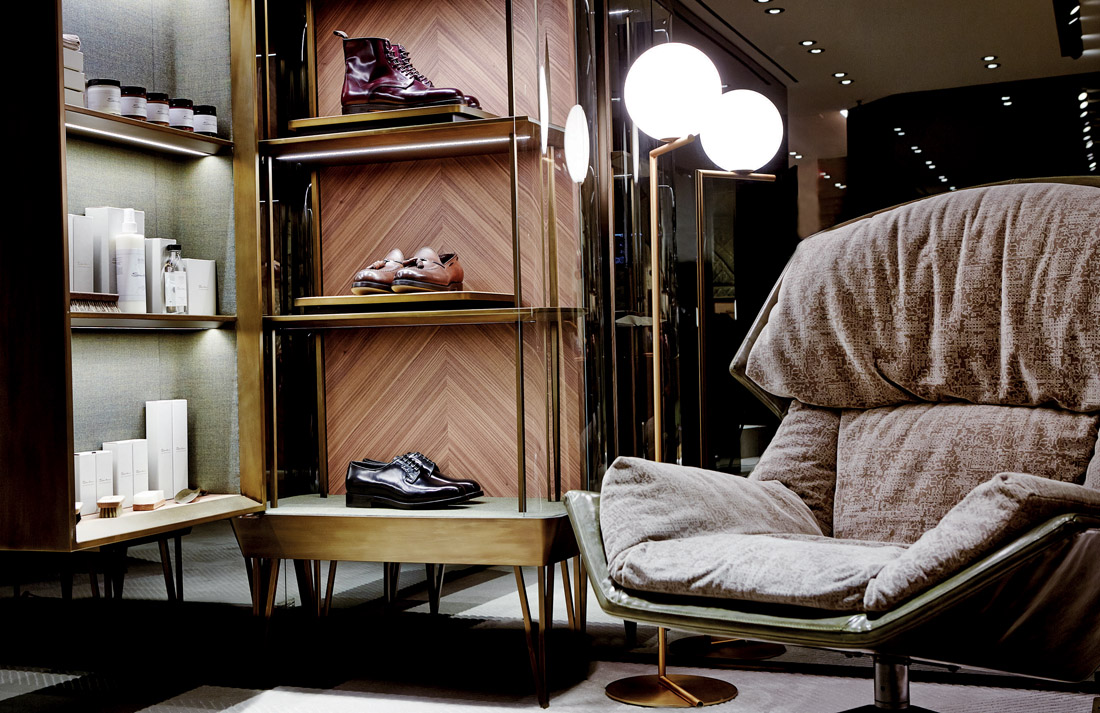 , boutique Santoni, Milan - - Everyone knows that youa huge experience in designing furniture. But at this exhibition you surpassed yourself. Your collection for Glas Italia attracted everyone's attention. It is both comfortable, and unusual, and very beautiful. Is it really glass? - Yes, it's glass. But at first the idea was not obvious to me. The thing is that I belong to that category of people who do not like working with glass as a material - it's uncomfortable for me. 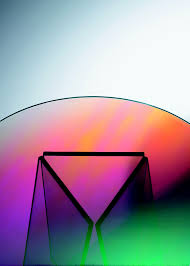 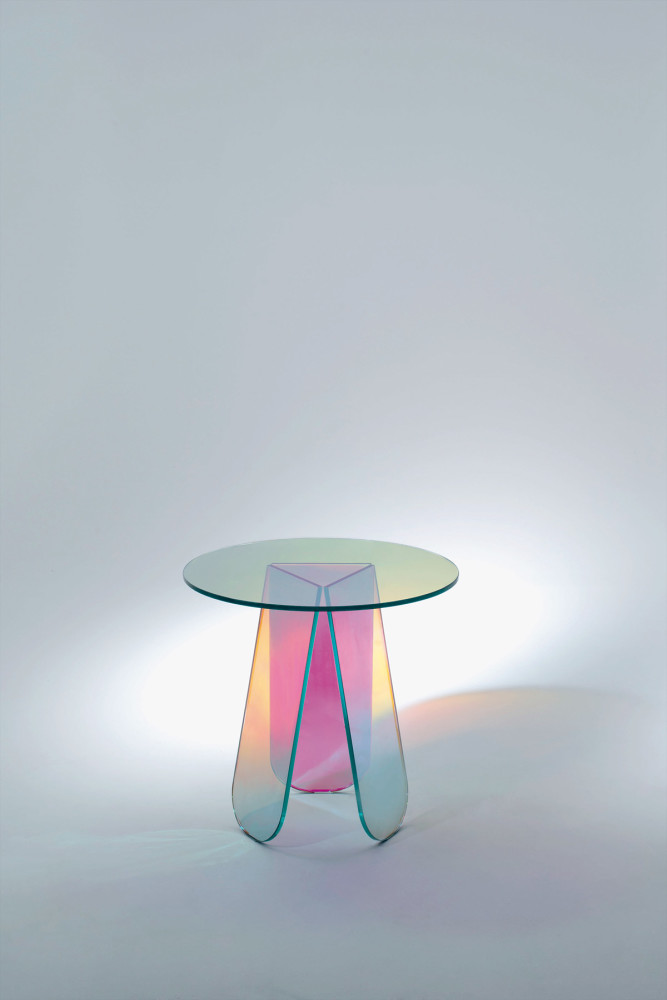 Collection Shimmer, Glas Italia - - Too muchcold? "No, too transparent." Too fragile. You see, I do not like the very idea of ​​using glass or transparent plastic in private spaces. First, it is too ephemeral - this is a minus, in my opinion. And secondly, I am annoyed by tables, through which you can see the boots of those seated. But the specialists of Glas Italia convinced me that glass can be made to be anything and, in particular, to overcome its natural shortcomings. It's very interesting to work with these people, because when they put unrealistic tasks, they do not say that it's impossible, but they leave to think about how to make your idea possible and even simple in execution. This is a real Italian approach, the approach of the masters of the Renaissance. So we came up with such objects, the form and technology of manufacturing which would allow to preserve all the advantages of glass: lightness, elegance, reflections and glare - but at the same time eliminate shortcomings. Technologically, these objects are made of laminated glass, assembled into intersecting planes - they make the light flicker and create amazing color effects. In addition, the finish coat reflects different colors in itself and ... does not allow you to see your feet when you are sitting at a table. 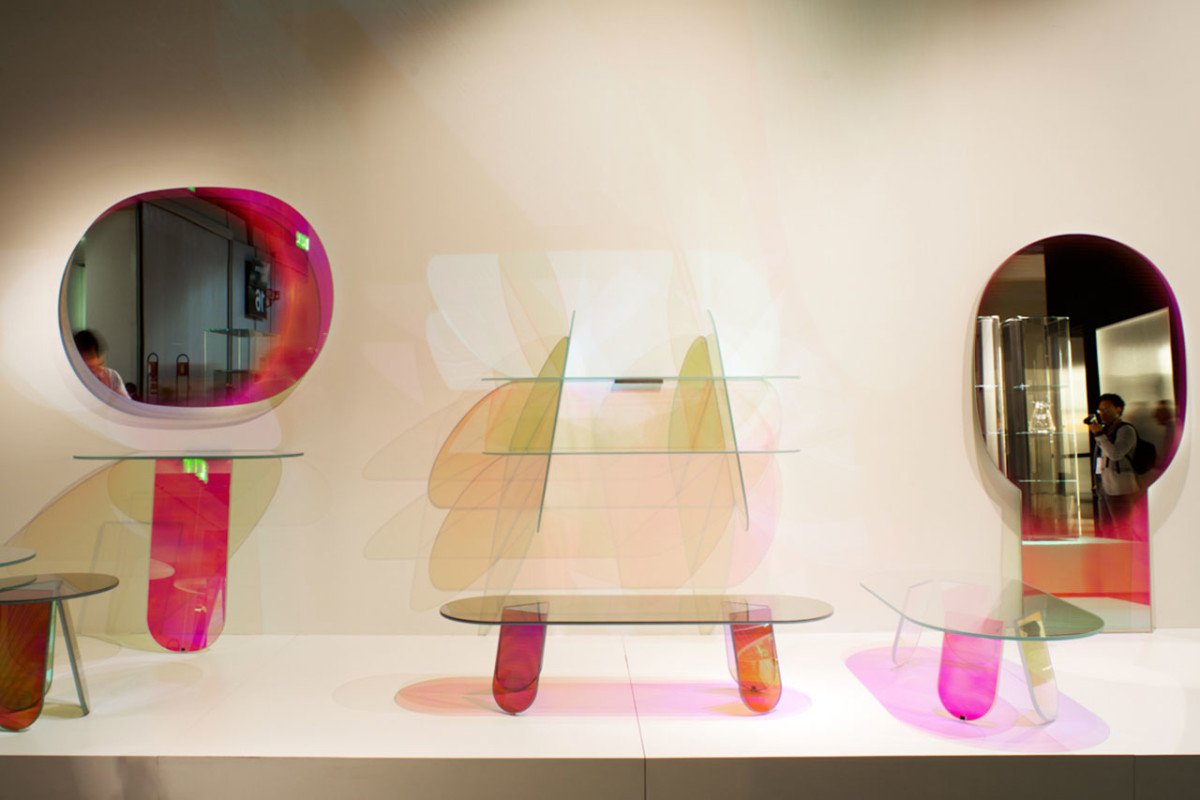 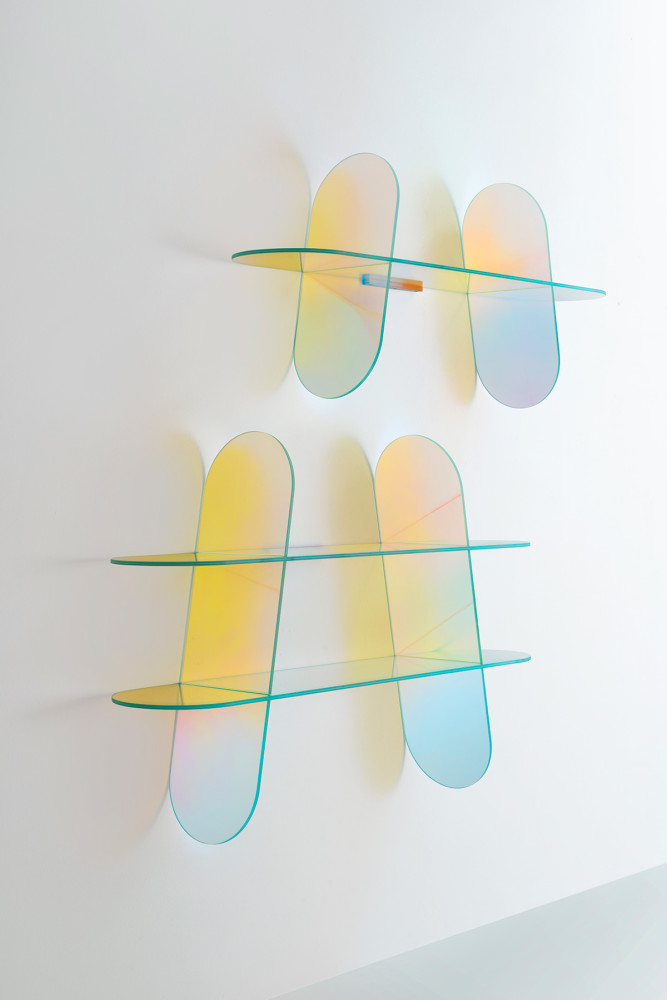 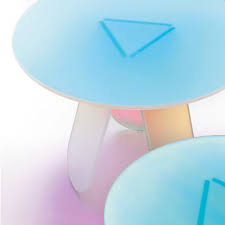 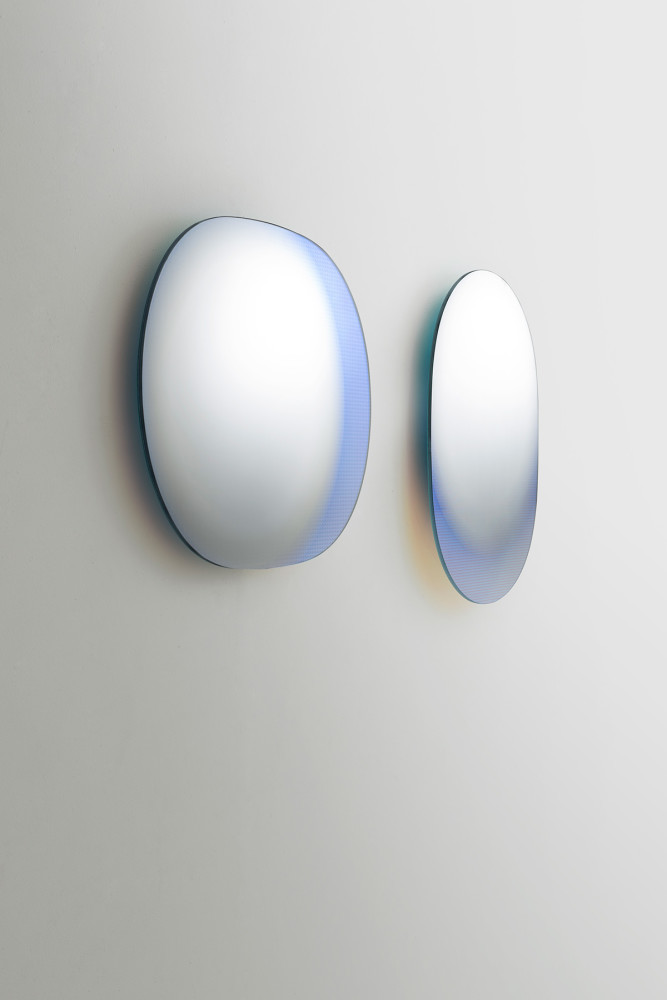 Collection Shimmer, Glas Italia - - They say youvery unusual house. And which room do you like the most? - My house? ABOUT! In my house there are actually no rooms as such. I went for quite a long time to this decision - the most open studio. But when I achieved harmony with myself, I was very pleased. My house is both my fortress, and my creative workshop, and the space for rest, but there are no borders between these zones. I do not have a separate time for rest, separate for a family and separate for work. All in one. So by and large, my room is the border of my carpet, on which my desk stands and my ipad lies. But the most favorite place, probably, is the garden. It's on my roof - there's a very small flat space with a piece of covered veranda. There were few options. And I did something like a beautiful patio. This is where I spend all the sunny and clear time of the year. In Milan, there are many such days! 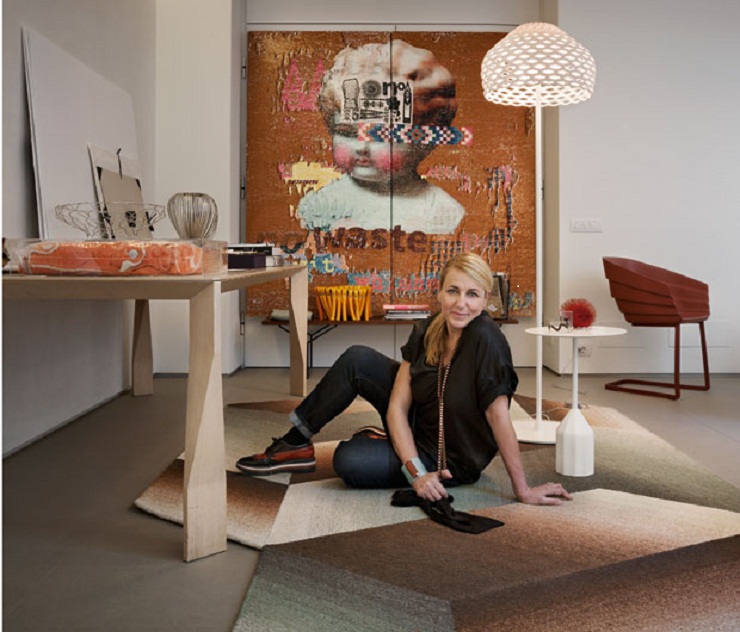 House of Patricia Urquiola in Milan

House of Patricia Urquiola in Milan

Open shelves in the interior: the pros and cons - etk-fashion.com

Eclecticism and tenderness - the predicted trend of 2016 from Patricia Urkeola - etk-fashion.com