Heroes of TV series and films often please us onScreen, but few have seen their apartments. Many fans would like to make their homes look like the apartments of their favorite characters, and now they have this chance. Very unusual, but highly sought after was the product of a young Spanish artist Inaki Aliste Lizarralde (Inaki Aliste Lizarralde). But unlike most of his colleagues, he does not sell beautiful paintings, still lifes or portraits. Inyaki draws in color pencils the layout of the apartments to all of us known heroes from popular TV series and films, and with detailed arrangement of furniture, with accessories and even textures of objects. The demand for these plans was so great that the author even stopped selling for a while, as he was not ready to cope with so many orders. 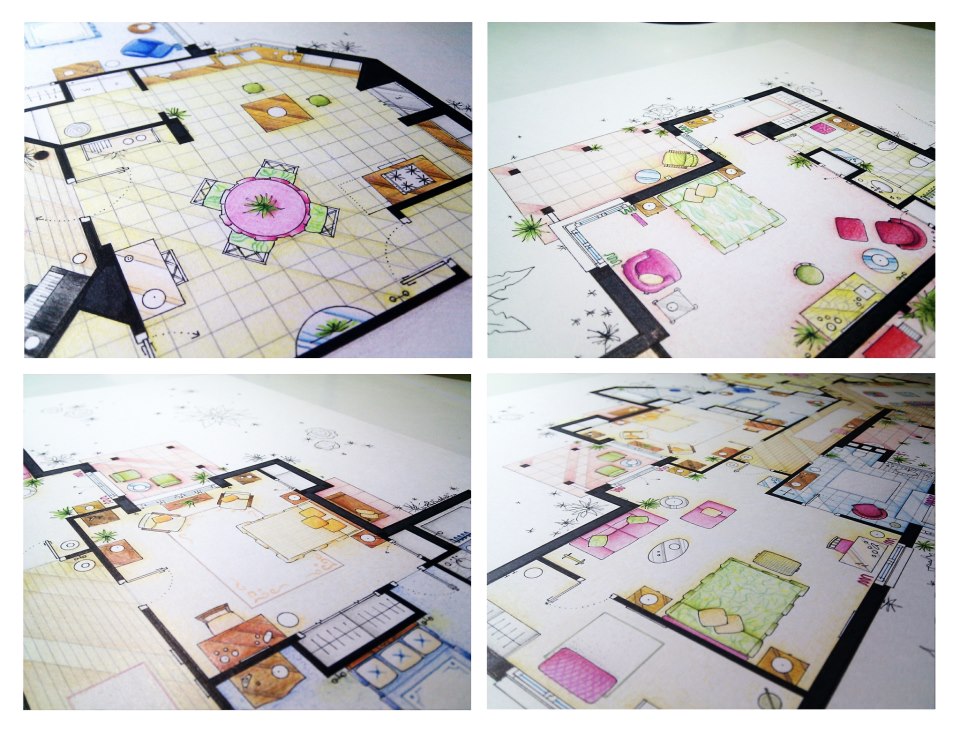 His project called a young talent FloorplansSeries. According to Iñaki himself, it takes from 20 to 30 hours to create one work. At the same time he needs to see all the seasons of the show, but Lizarralde admitted that he often puts the series on a rewind and stops them on the most successful shots, where you can consider as much detail as possible. First, the artist creates the first, "raw" layout. Then the second is done, where the final dimensions and proportions are specified, and furniture is also placed. The third scheme is final. It includes colors, fabrics and all the other details necessary for setting the exact plan. Inaki approached the case so responsibly that he consulted with architects and builders to comply with all the rules and subtleties of planning. 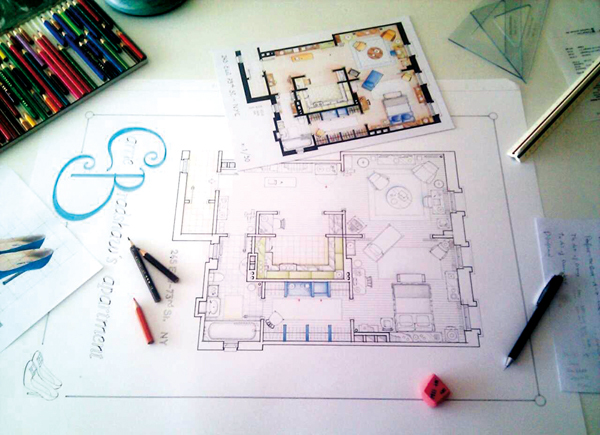 Let's look at the most popular works. Let's start with Dexter, perhaps. Great problems arose with the bathroom, because most of her plans are in the intro to the series. But in general, the artist shares, Dexter's apartment, as well as Carrie Bradshaw of "Sex and the City", is completely built in the studio and worked out in detail. 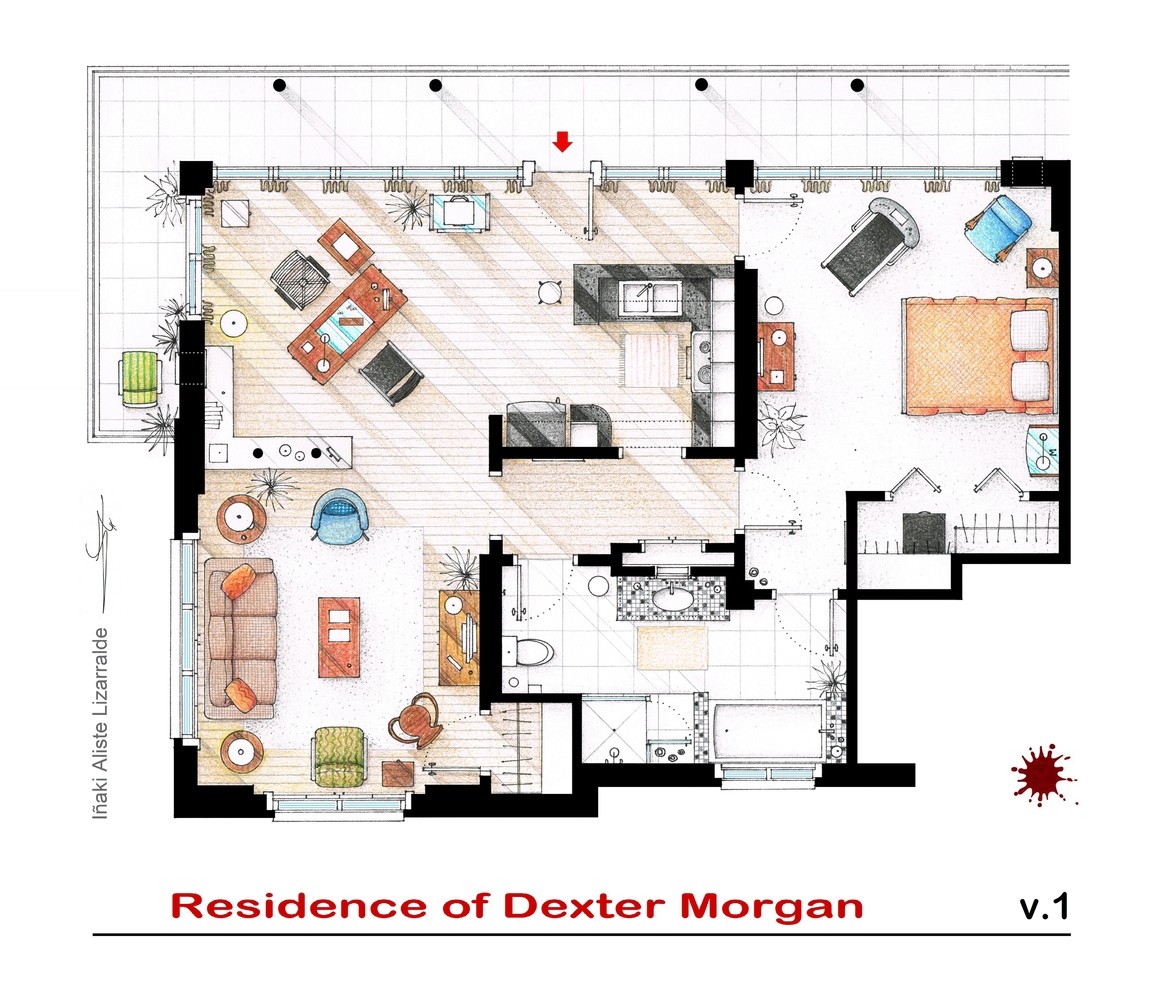 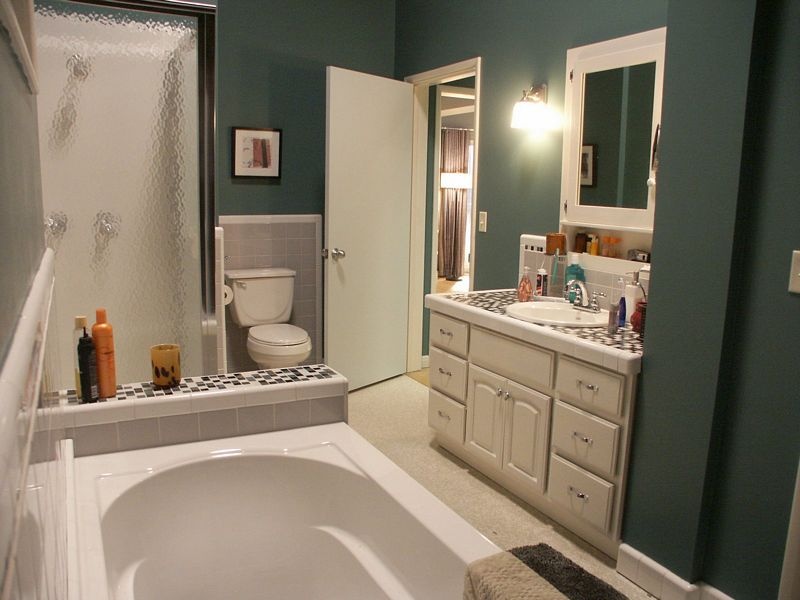 Once started, let's move on to Carrie's apartmentBradshaw in the Upper East Side. For 6 years we followed the life of the writer, her friends, novels, and, of course, admired the unusual cloak room between the kitchen and the bedroom. The apartment changed slightly from season to season, but here is the most optimal option for the whole series. 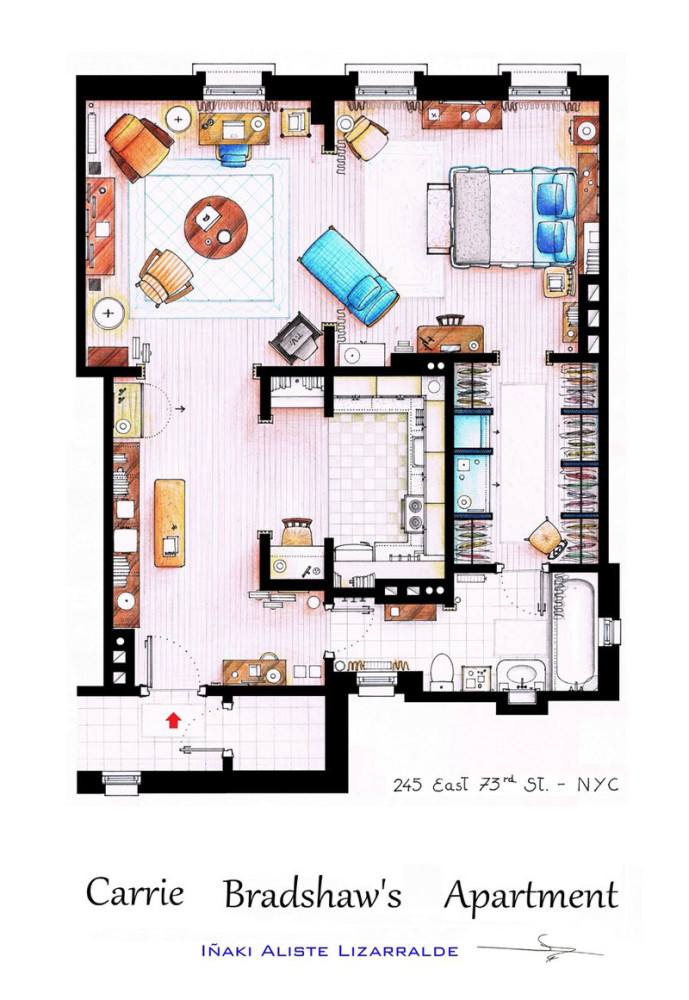 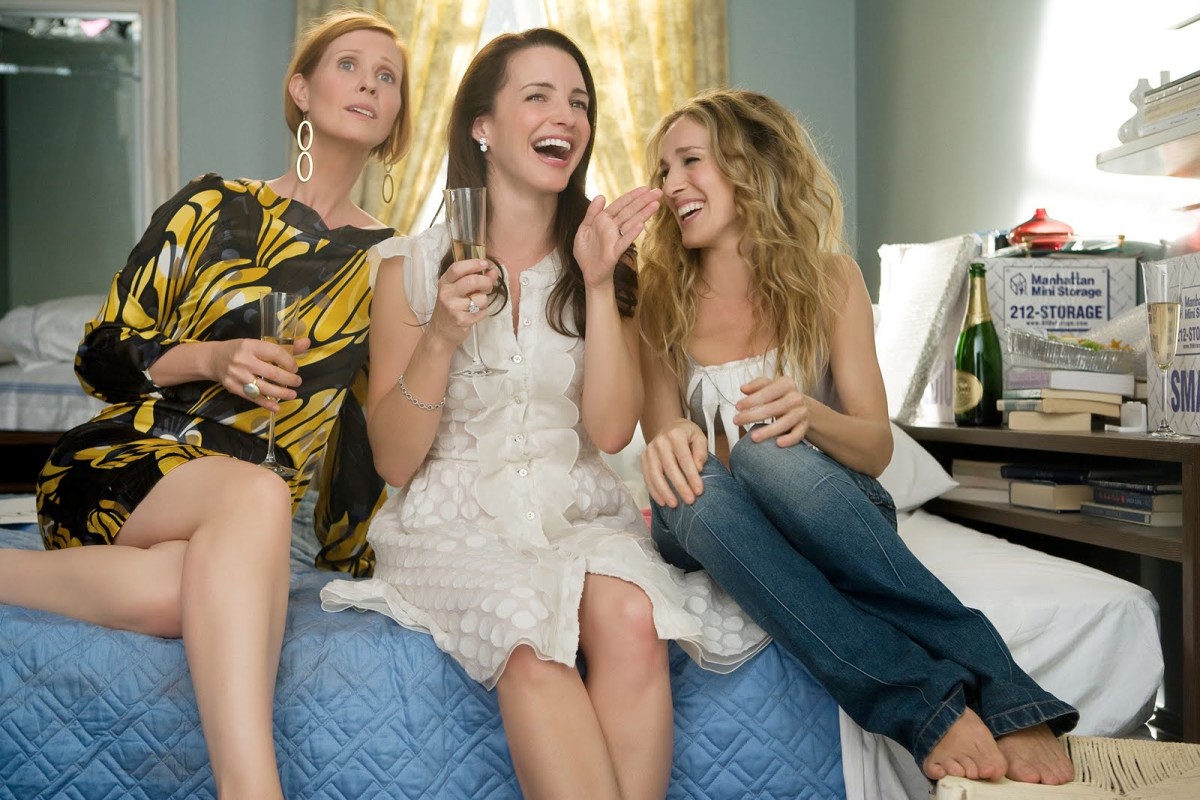 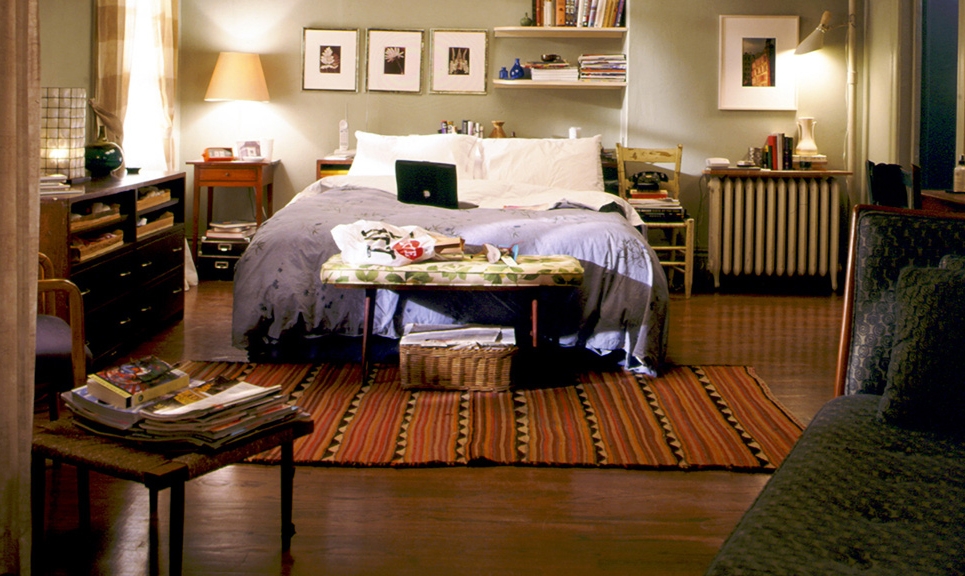 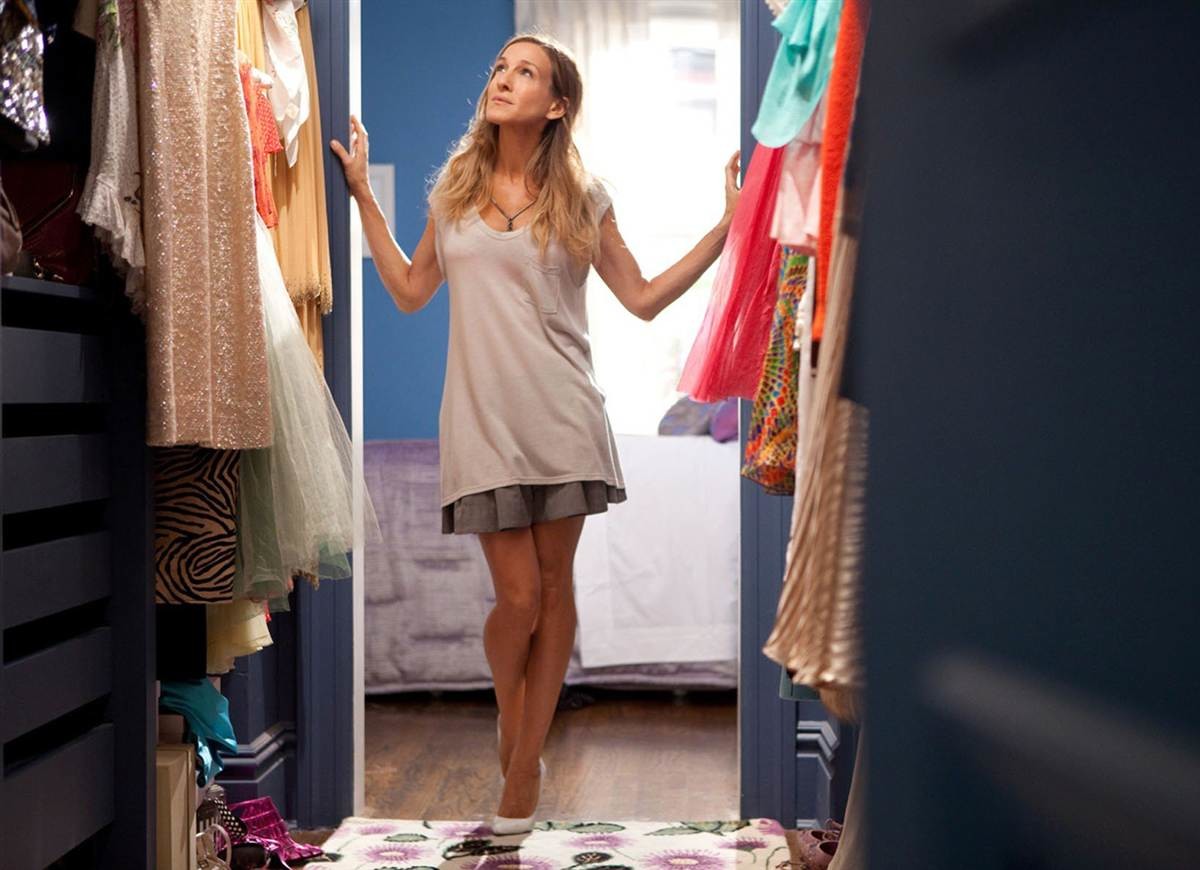 Perhaps the most popular TV shows of all time are "Friends." The types of apartments Monica and Rachel in the neighborhood with Chandler and Joey gave us an unforgettable experience. 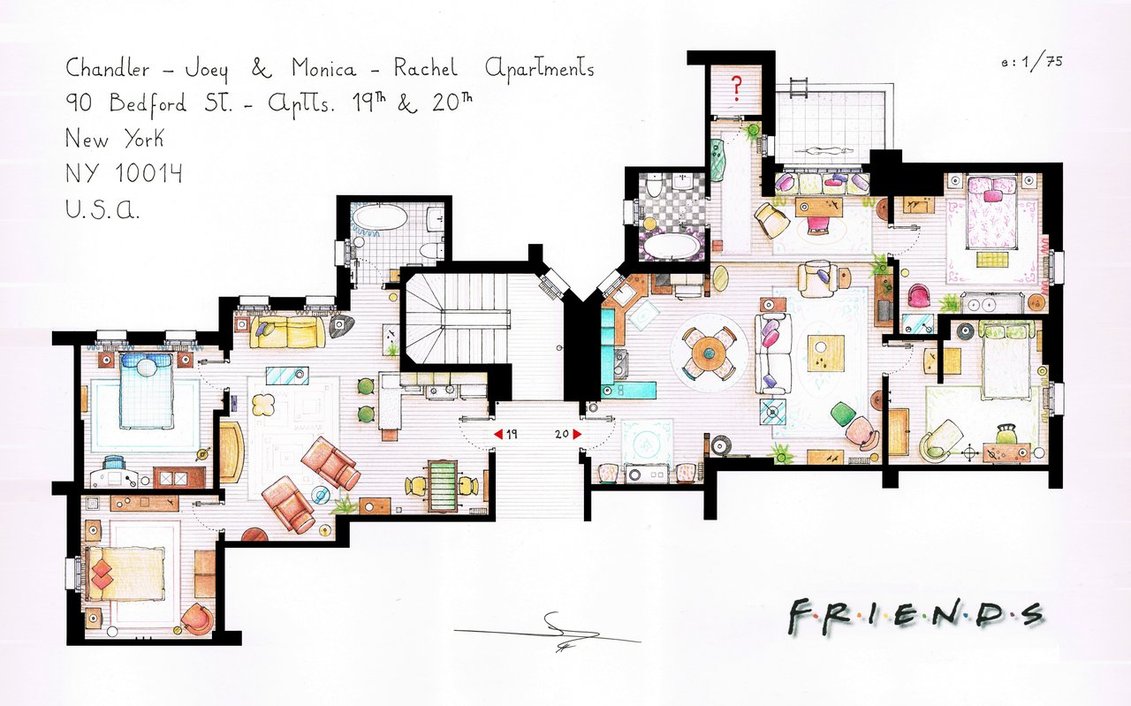 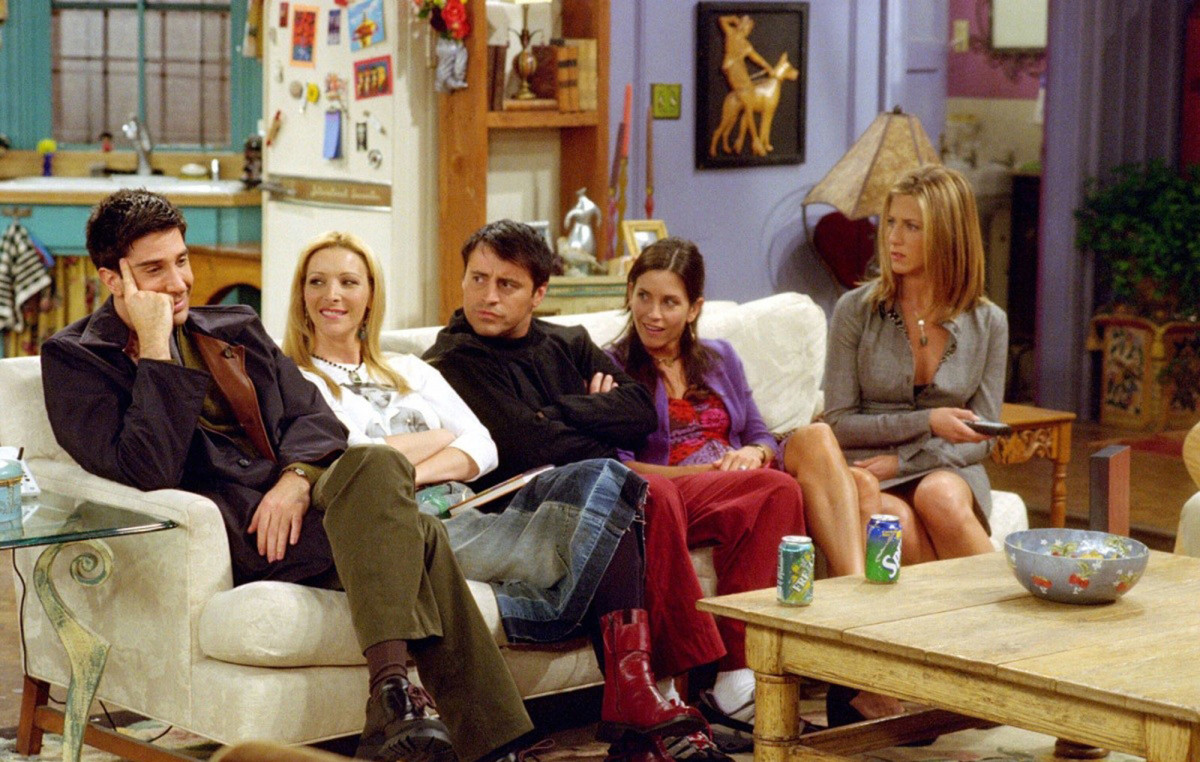 The home of Ted Mosby from the sitcom "How I Met Your Mother" had to be worked out a little - to extend the walls in the bedrooms and the doors to meet all the necessary technical parameters. Perhaps one of the most complex and abstract forPlayback was the apartment from the series "Two and a half people." But, despite all the difficulties, Inaki, as always, coped and pleased with the excellent result. 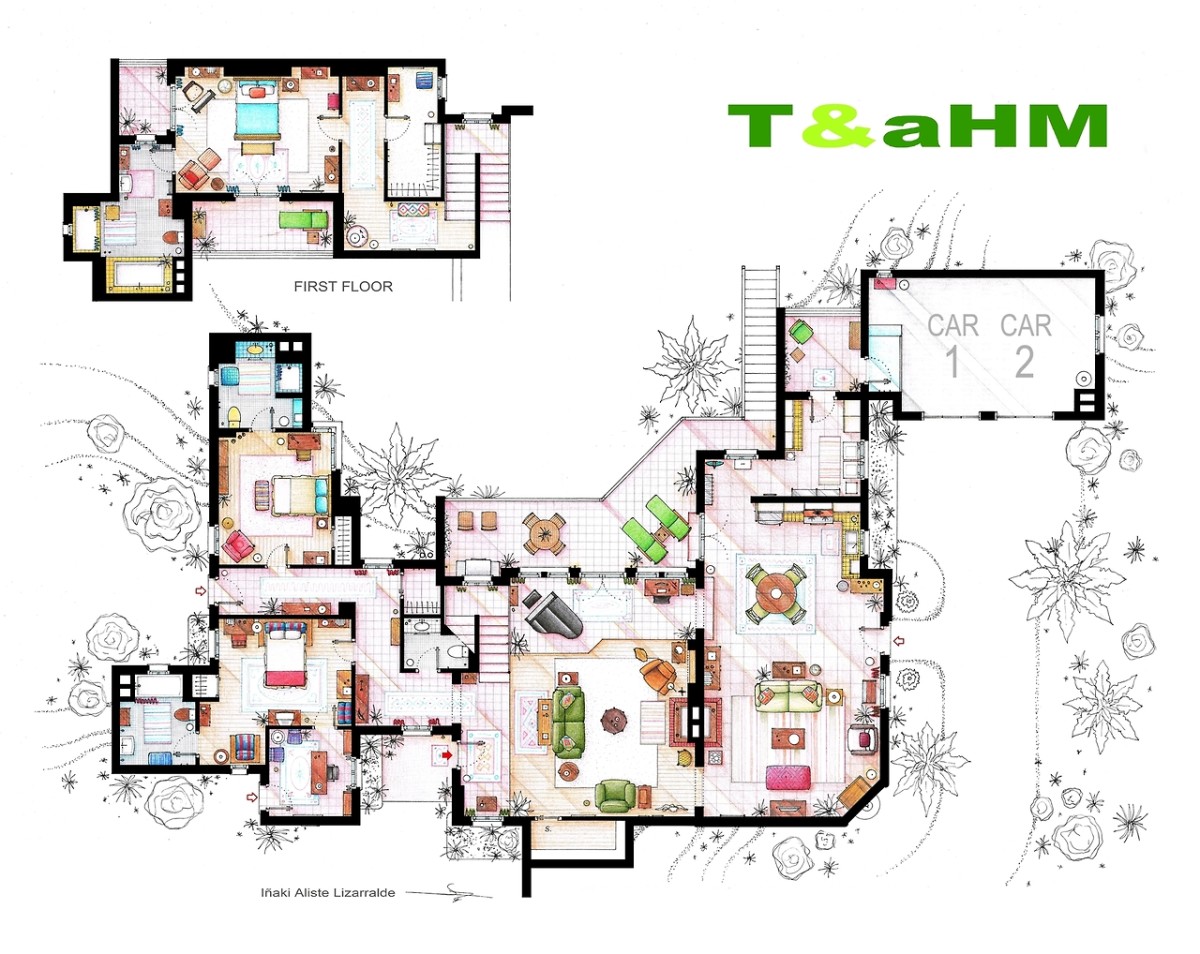 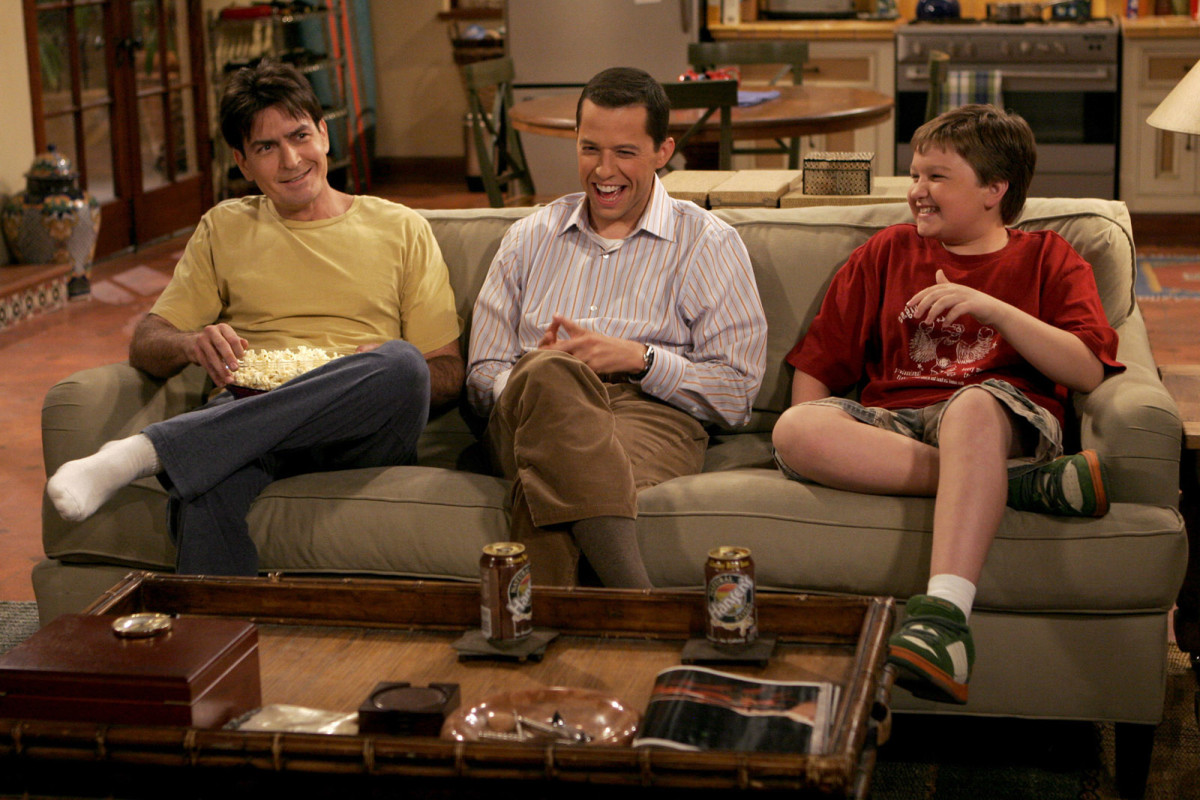 As Sheldon Cooper would say, it's not an apartment, it's a wild funnel of entropy. And here is the bachelor lair of two theoretical physicists from The Big Bang Theory, as well as the neighboring apartments of Penny. In addition to the series, Inaki makes plans for apartments from the cinema. So, he did not pass by his attention and the apartments of Holly Golightly from the legendary American painting "Breakfast at Tiffany." 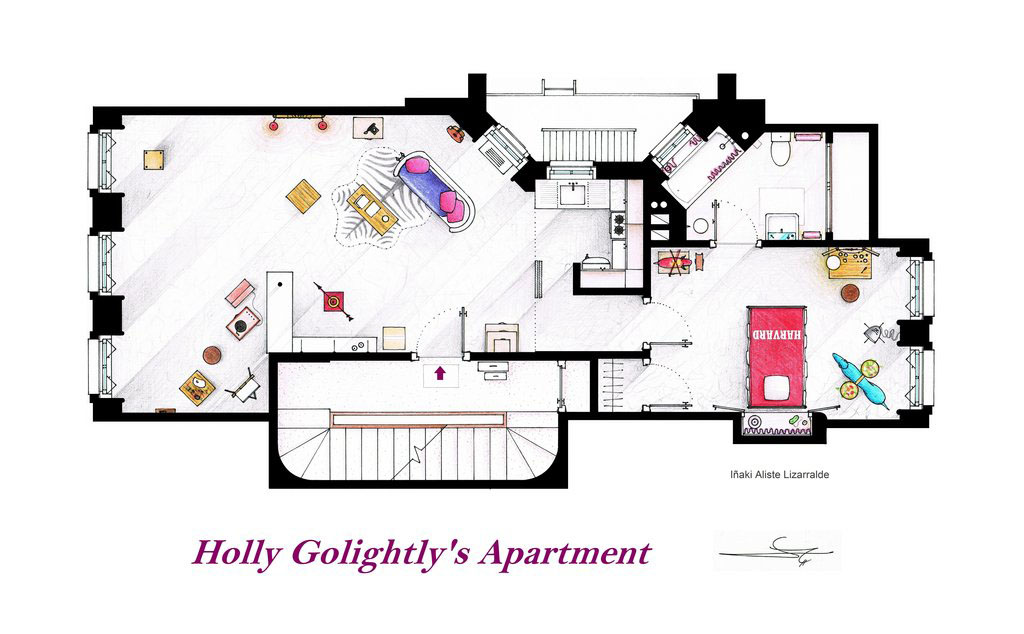 And finally I would like to introduce one moreLess famous house. Although it does not exist in reality, but each of us saw it on the screens and laughed at funny yellow men. Here is the family housing plan from Springfield (animated series "The Simpsons"). 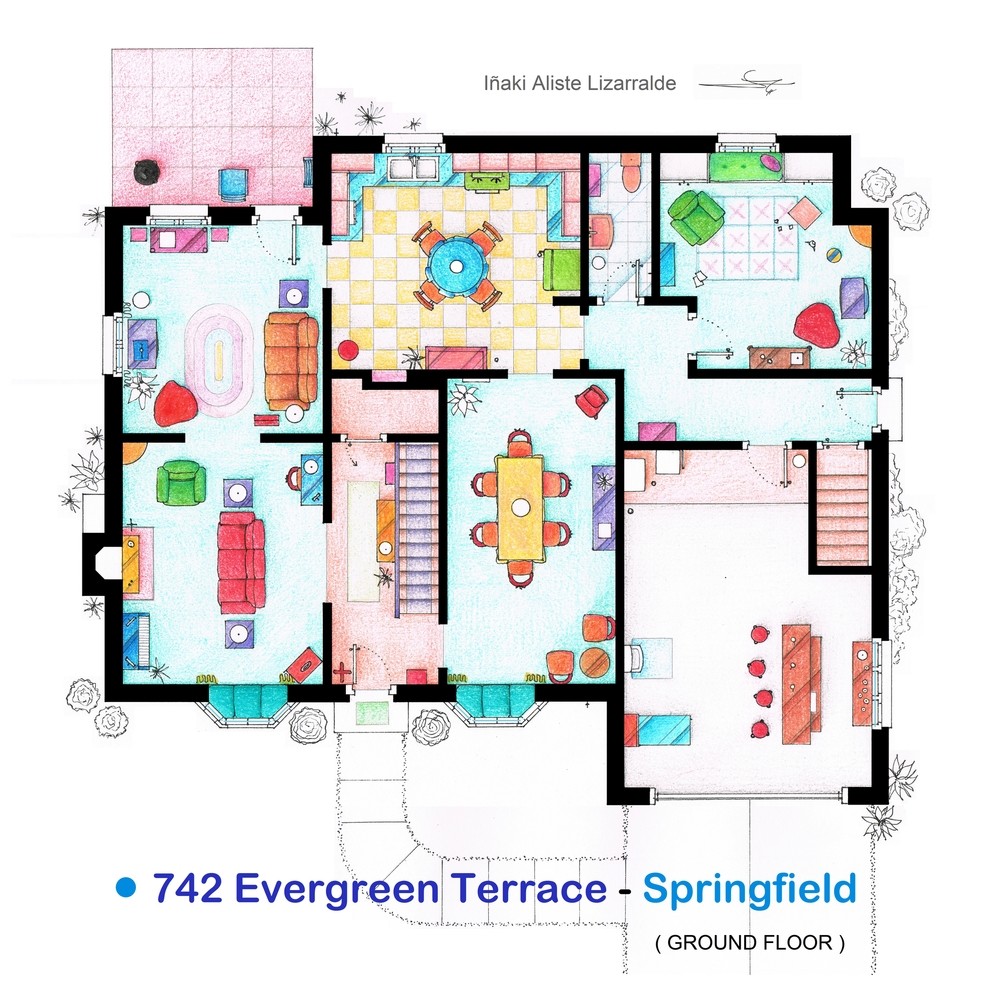 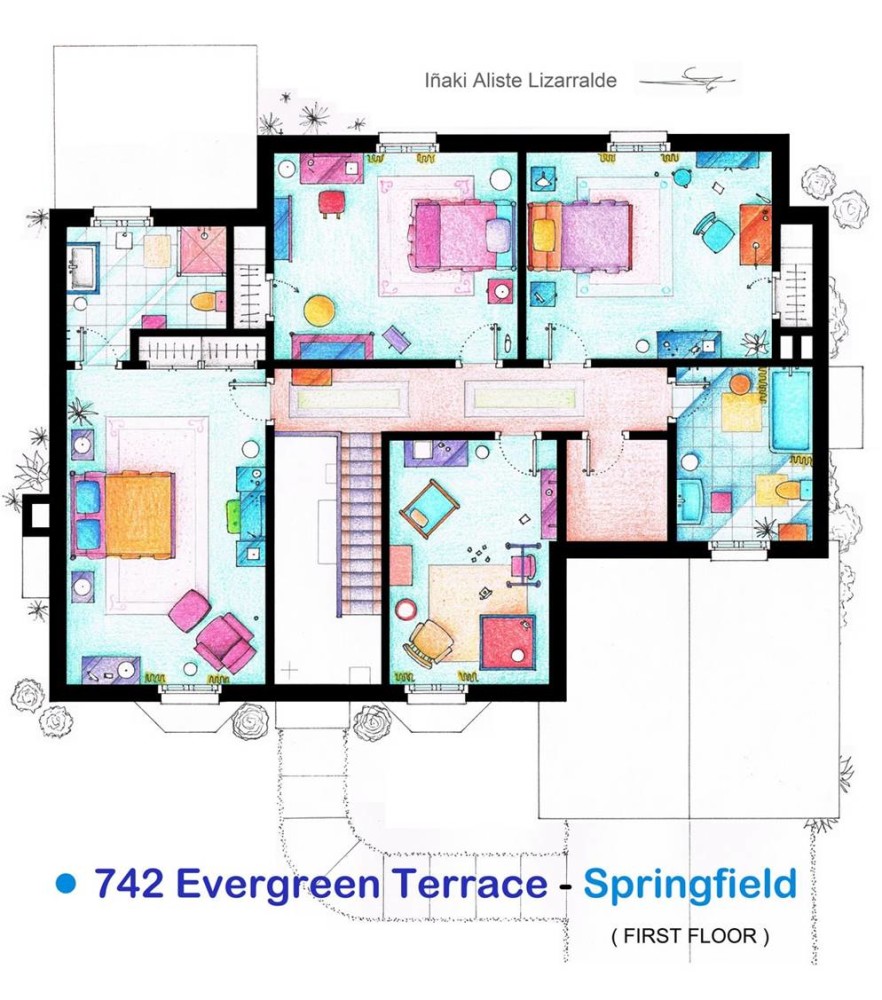 In what color to paint the kitchen: 10 popular combinations