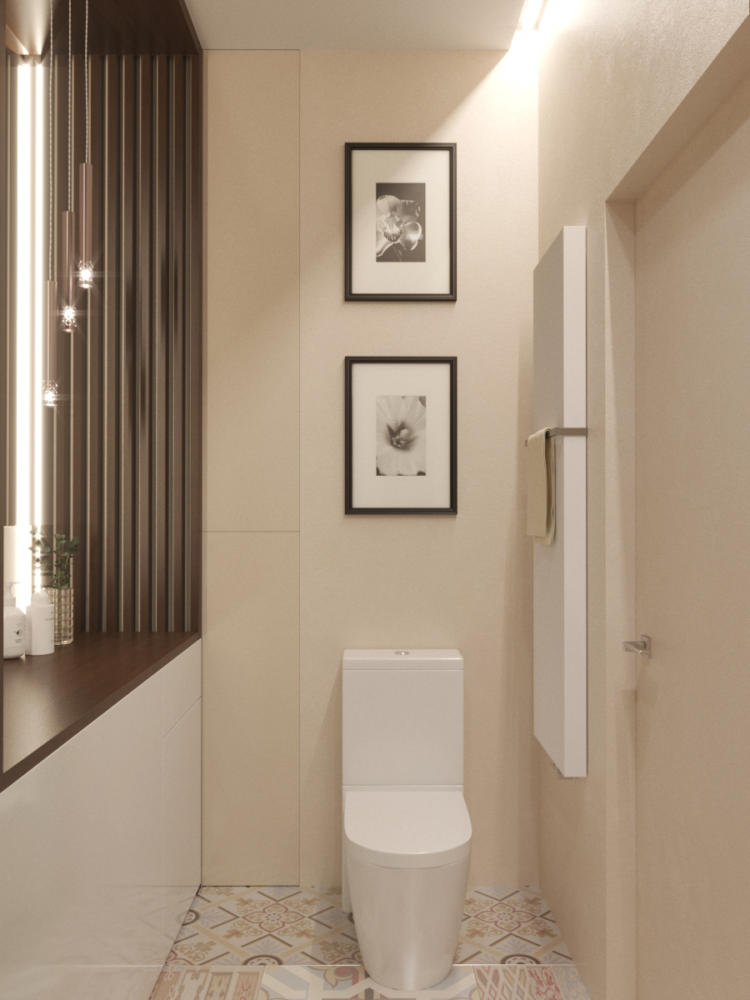 If you happen to be in the apartment only by arrivals, thenThe interior of such a way of life must match. We show you an excellent example of an apartment hotel This apartment is an area of ​​a little less than fifty square meters located in the housing estate "Filigrad" and belongs to an elderly couple. Spouses constantly live in Kemerovo, and come to Moscow only occasionally, to visit children and grandchildren. Therefore, the design studio "Design Point" faced the task of creating a comfortable and practical interior, where there would be nothing superfluous. Let's see what decision the designers have found. Articles related to Stepan Bugaev, art director of the design studio "Point of Design" Currently, he is developing the design studio "Point of Design." In addition to creating private interiors, he cooperates with leading Russian developers. He is a teacher of the School of Design of the Higher School of Economics, conducts the author's course "Interior Design. Rules for creating a successful project. " Performs with open lectures on the topic of interior design and writes articles for leading interior magazines and portals. In the past, he co-founded the "Victory of Design" studio. Included in the top 100 best designers, according to AD magazine. Polina Shevtsova, Interior Designer Graduated from the PFUR with a degree in Social and Differential Psychology and the Russian Academy of Science in the field of Environmental Design. He works as an interior designer in the Design Bureau "Design Point". He believes that not only the customer, but the very space of the apartment and its location can help in creating a future interior. The layout in the apartment was initially free, so it was decided not to transfer the zone, only slightly widened the bathroom, and the loggia that was attached to the bedroom was converted into a recreation area. The main task was to create one large space kitchen and living room, where the hosts spend a lot of time, and an isolated bedroom. Since the apartment was originally not conceived as a permanent residence, experts took advantage of the secrets of designers designing hotels. We tried to make the interior as light and versatile as possible, we chose a minimalist style with a lot of natural finishing materials and a restrained color scheme. In the interior there are also their chips, for example, a frosted glass insert in the wall separating the living room and bedroom. Thanks to her, light freely spreads through space. And in addition to the main lighting in each room are hidden hidden lights. 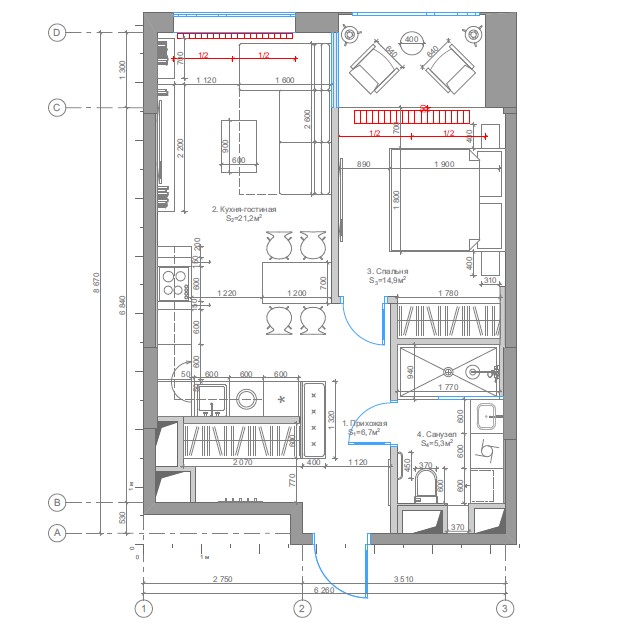 Living room and kitchen combined, as they wishedCustomers. There are several lighting scenarios in the room: a night lamp under the curbstone, decorative lighting behind the sofa, basic lighting on the ceiling, a cozy floor lamp with directional light. The designers tried not to clutter the central part of the room, so they chose a light transparent table Cattelan Italia streamlined shape with thin legs. The sofa unfolds and turns into an extra bed. The kitchen set turned out to be large and roomy, but it does not look cumbersome, thanks to the light colors and the non-handed system. 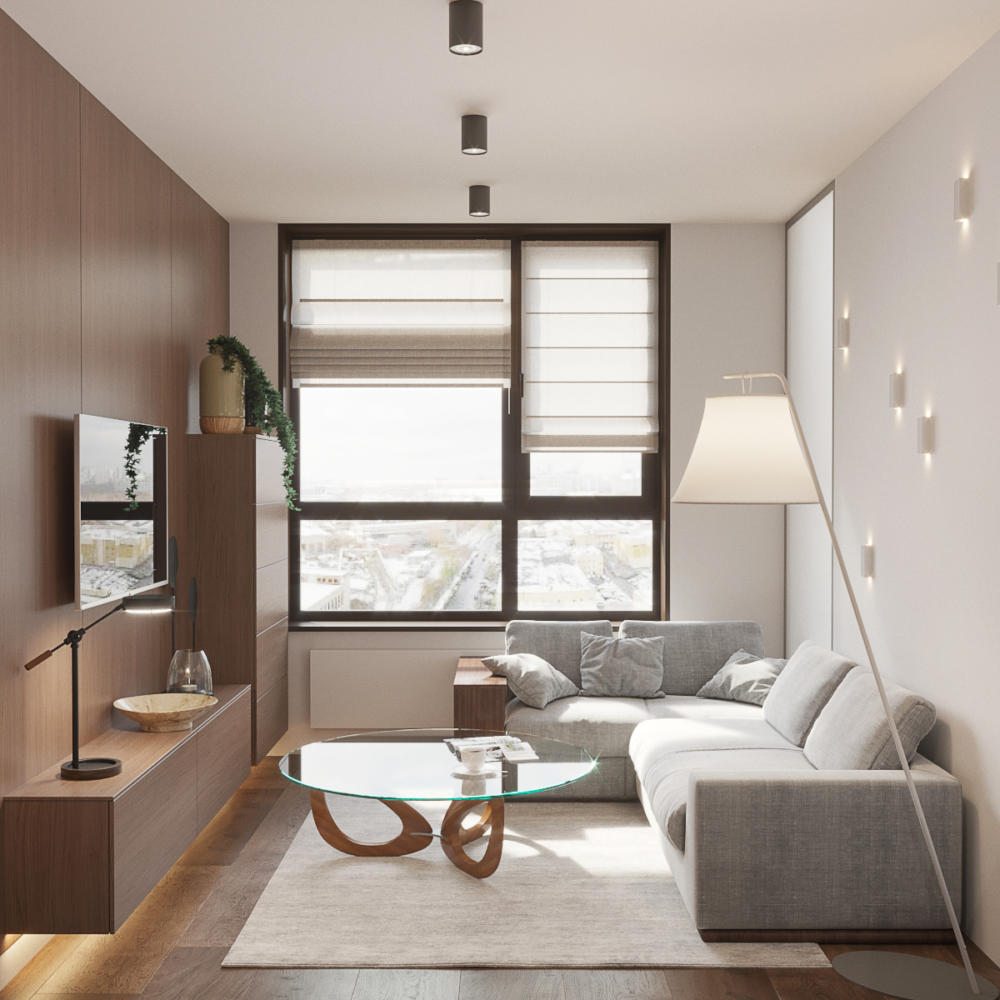 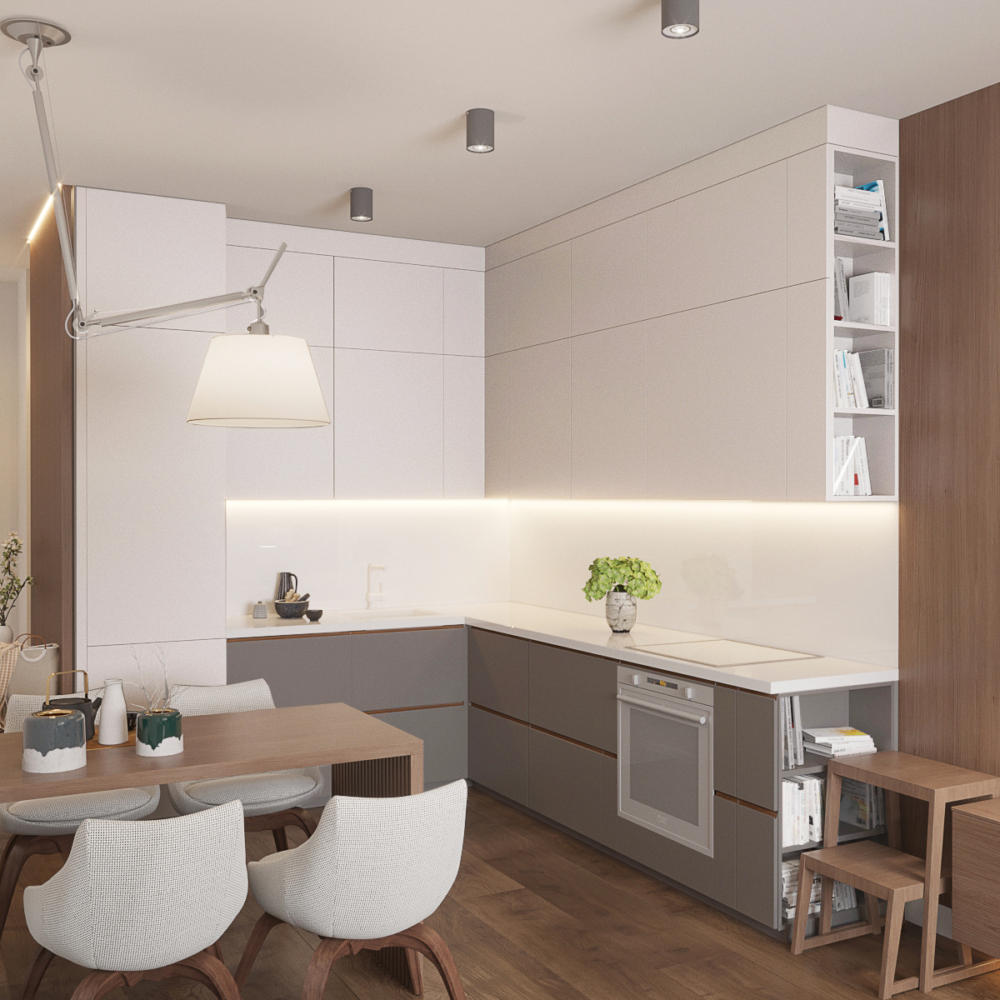 In the bedroom designers used texturedPlaster with illumination behind the head of the bed. It has adjustable illumination, which allows using it as a night light. Behind the bedside tables from the floor to the ceiling are symmetrically arranged mirrors: they visually expand a fairly narrow room. On the site of the former loggia, at the request of the customer, a small podium with a rest area was built, and a convector was placed in the floor. Built-in cabinets from floor to ceiling are made in the color of the wall, do not attract attention and do not make the room cramped. In addition to the cabinets in the bedroom, the apartment has another storage space - a large two-meter dressing room in the hallway, on the other side of which is the kitchen. Because the customers did not need a bath, inBathroom was organized spacious shower room without doors: water does not pour out through the partitions. And the gangway was not built in the floor, but right in the corner near the wall, and due to a drop of 2 cm, they made a slope to it and avoided the sledges. In addition to a hand shower, there is a tropical one, so despite the lack of a bath, the owners enjoy the pleasure of water procedures. Related articles How to apply bright colors in the interior: we understand the example of kopecks in Brazil

Bright interior: the project of the Moscow apartment