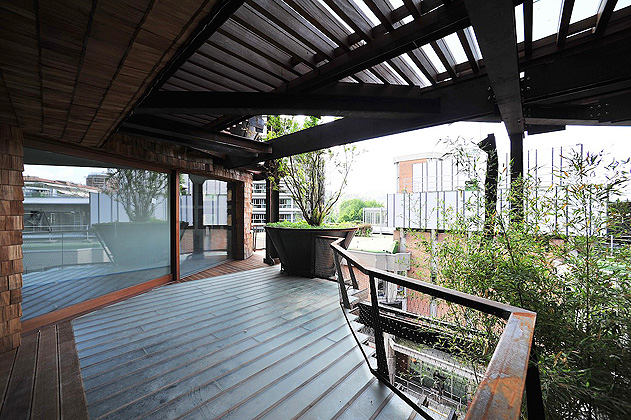 One of the most remarkable realizedEcohouse projects are located in Turin. The apartment building impresses with its facades. In fact, the matter is not limited to them only: “green” technologies are applied here to the fullest extent. landscape. He called his brainchild 25 Verde (25 Green), and there is indeed more than enough greenery in this - and on this - building. Enthusiastic critics point out that the architect managed to realize his childhood dream - to build himself a tree house. And who of us in childhood did not dream about it? Many even built. But never before has the "tree house" been embodied on such a scale in reality. And the point is not so much in the large number of trees that were transferred to the facades of the building in their adult form - such projects already exist, and not in a single copy. Everything is much more serious - Ecohouse 25 Verde has incorporated several "green" technologies of engineering, and not just "cosmetic" type. Therefore, it can be considered a truly reference eco-house, one of the best in its class. The benchmark at the modern level of urban green building. On the "cosmetic" sustainability of 25 Verde:trees and shrubs live on the facades, neatly transplanted in adulthood into special, large-volume metal "tub pots". They were filled not only with earth, but with a special nutritional value, specially developed soil. This was necessary so that in the conditions of a limited volume of earthen coma, large trees could develop fully, despite the obvious difficulty for root growth. For the third year now, trees and shrubs have been growing at a normal natural rate and look great. This means that the landscape designers of the Lineeverdi studio Stefania Naretto and Chiara Otella - both doctors of agricultural sciences - have proven their professionalism. The selection of tree species was focused on local species with a strong fibrous root system of surface occurrence. Experts opted for deciduous trees - their seasonal variability allows the building not to overheat under the sun in summer and, conversely, to receive additional solar heat and light from late autumn to early spring. A total of 200 large trees with a height of 2.5 to 8 meters were used. Directly on the building itself - facades and roofs - 150 of them are located. The rest are in their own courtyard of a U-shaped house with short "legs" and a long façade on Via Chiabrera, 25. Now in Turin, at this address, which is well known to all taxi drivers, another attraction flaunts. 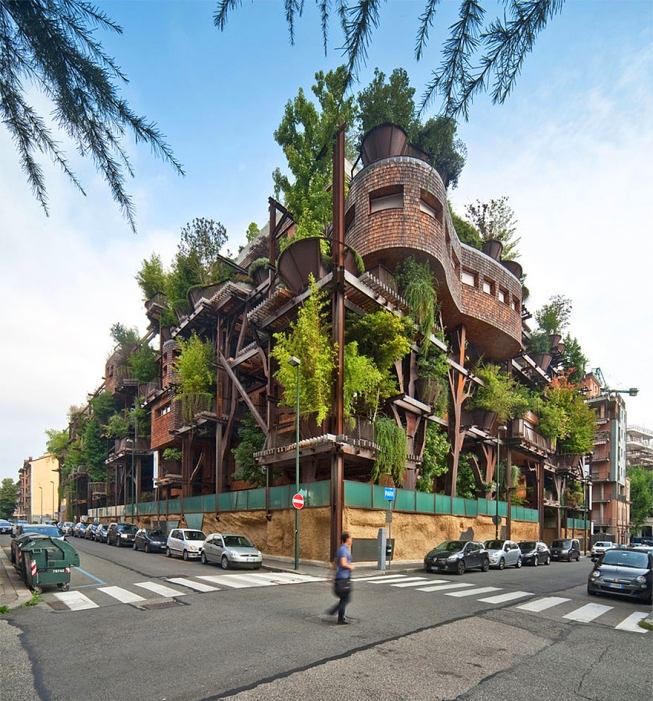 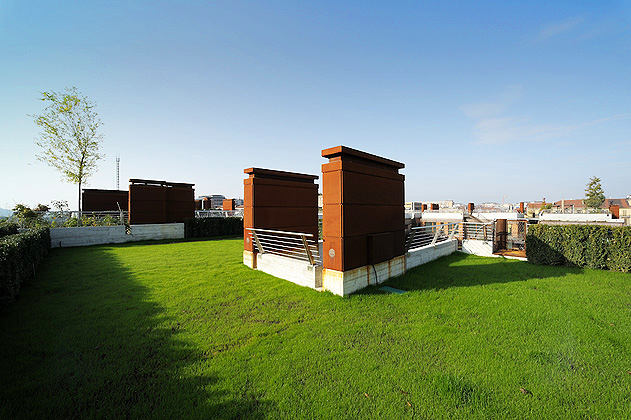 Architect Luciano Pia faced a difficultthe task is to provide a powerful and reliable foundation for a very heavy "body kit" of the building with hundreds of tons of soil in tubs and the living trees themselves. The idea to make consoles integrated into the structure of the building was immediately abandoned - this, firstly, would greatly increase the cost of the project and, secondly, would reduce the living space. A different decision was made - to surround the building with a power frame, which will take on all the load. Therefore, the "transport infrastructure" was moved to the terraces, on which tubs with plants were installed. Powerful box-shaped welded structures stylized as branching tree trunks were used as load-bearing support elements. During the construction process, they were insured by temporary scaffolding from powerful channel beams, most of which were later dismantled. Naturally, it was not possible to completely hide the power frame, and such a task was not set. The contractor was De-Ga SpA, which previously collaborated with Luciano Pia in the implementation of his project Via Calandra building, Via Cavour building, Giardini Vitali-Spina 3 (Giardini Vitali– Spina 3). The direct curator and developer of technical solutions (construction project) was engineer Gianni Vercelli. 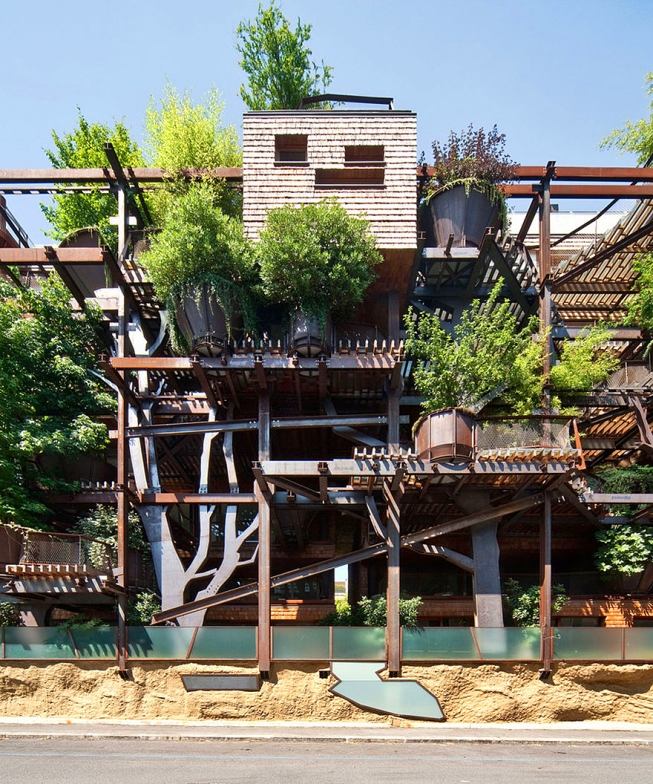 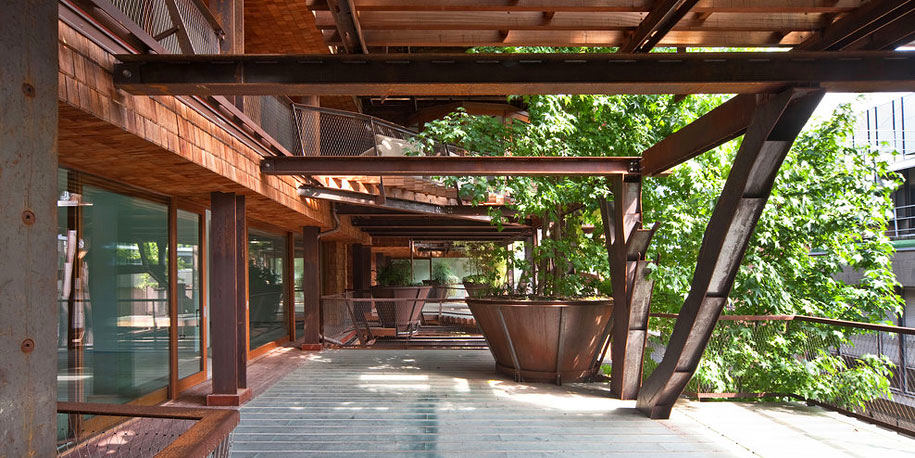 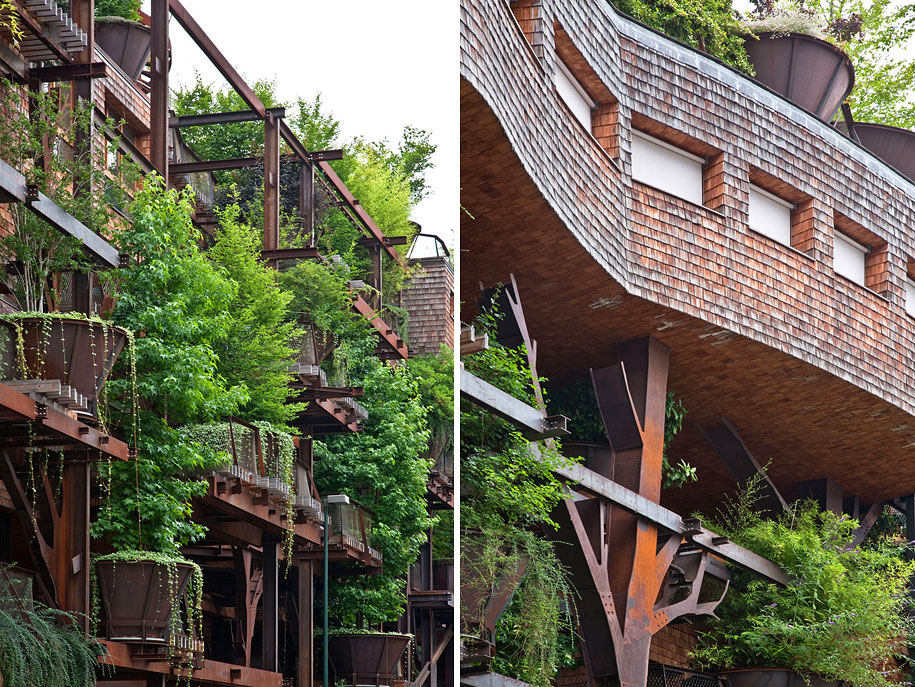 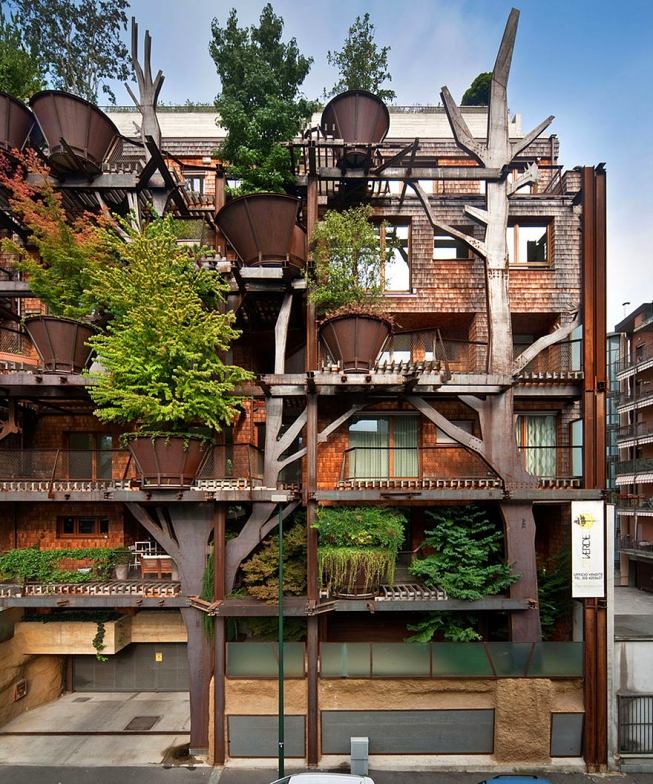 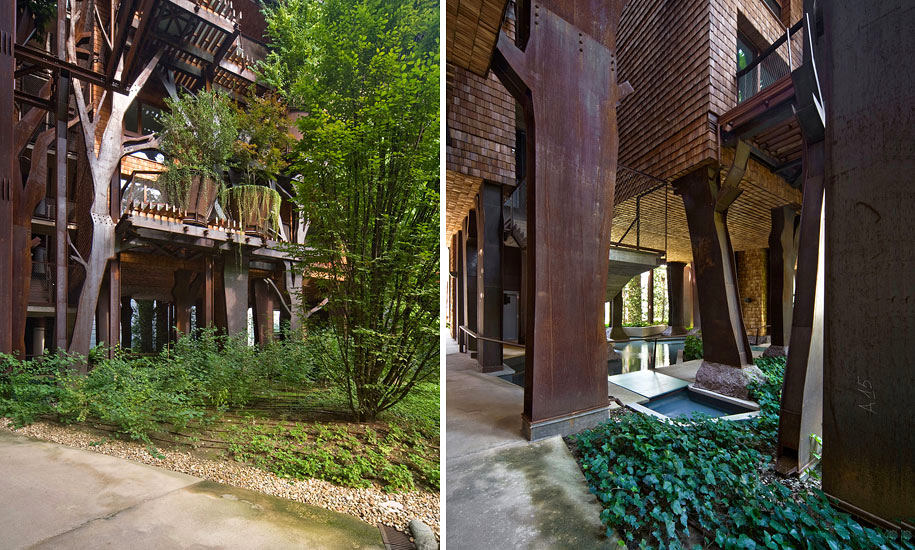 In addition to the trees and shrubs themselves, abundantlydecorating the facades, courtyard and roof of the building 25 Verde, other solutions related to the so-called "green technologies" have been applied. What made him one of the most in the world. The simplest thing is a completely atypical cladding of a house made of larch blocks, like a tiled covering. Firstly, it is an absolutely natural material. Secondly, larch does not rot at all. Thirdly, together with the lathing and sub-base, such a decorative facade turns the house into a thermos that does not radiate heat and does not allow cold to pass through. The effect is all the more powerful since the building itself is built of materials with extremely low thermal conductivity. It follows that the costs of air conditioning and heating for residents are sharply reduced. In addition, the "engineer" of the house is built on the principle of operation of a heat pump, which makes the house practically autonomous for heating, water heating and partly for power supply. The heat pump is a high-tech complex that can use the dissipated energy and operate on the difference in temperatures between the outside air and underground horizons. And one more important detail: not a single drop of water falling on the house is wasted and does not go into the storm sewer. The intercepted water is used for watering plants and replenishing ponds, for flushing toilets. All of the above has led to the fact that the brainchild of the architect Luciano Pia has become a real "bomb" both from the point of view of the architectural itself, and because of the massive and large-scale. 25 Verde is one example of the concept of greening mass urban housing, implemented not as an experiment, but as a “run-of-the-mill” residential building in a large city. And he did not write about this house - even before it was put into operation - only lazy. By the way, construction began in 2007, and the first tenants moved into their apartments in 2012. It is unlikely that the architect expected that this particular project would glorify his name - and deservedly - all over the world. 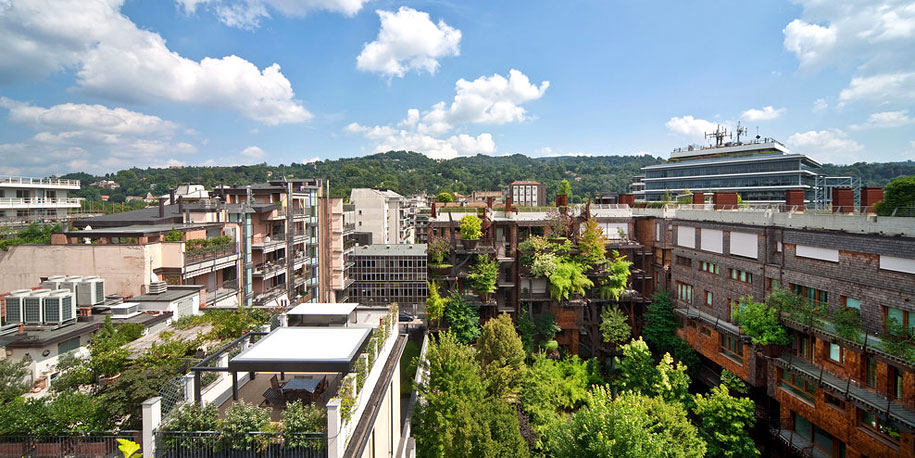 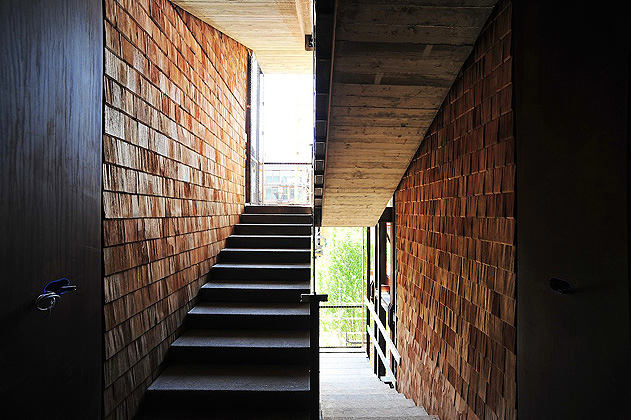 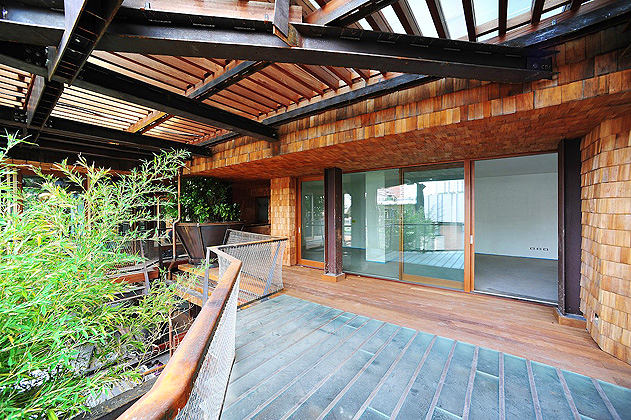 Ecodom as an inhabited object

25 Verde is located in a rather expensive areaTurin, and from the very beginning 63 apartments were in high demand. We do not have photographs of the interiors of living spaces, they are individually formed by the owners, but the total area of ​​the eco-house is 7,500 square meters, plus its own park areas on the roof, with. In the yard, besides 50 trees, as mentioned above, there are shrubs and small ponds that add charm and humidity on hot summer days. In this green courtyard, protected from the street by a house and trees, it is always quiet, it has its own microclimate. Still: according to the calculations of the Lineverdi landscape design studio, the green decoration of the house produces about 150 thousand liters of oxygen per hour and absorbs 200 thousand liters of carbon dioxide during the same time. How much dust and noise are trapped by crowns and foliage is not amenable to counting. 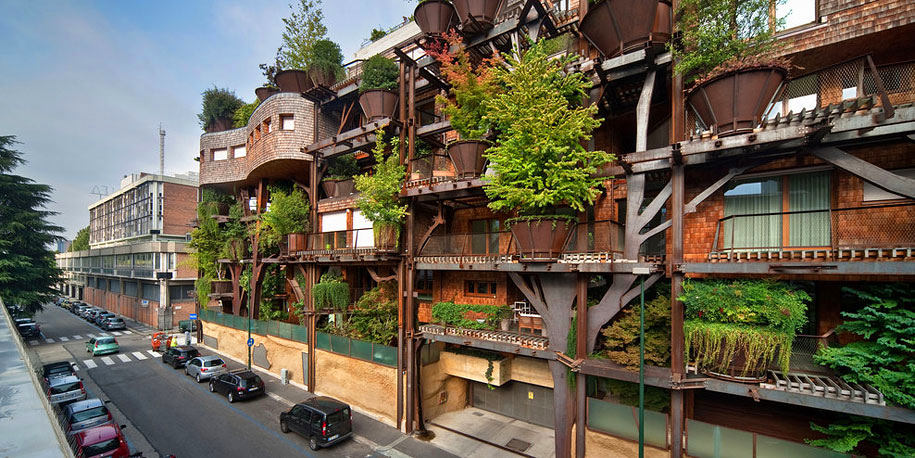 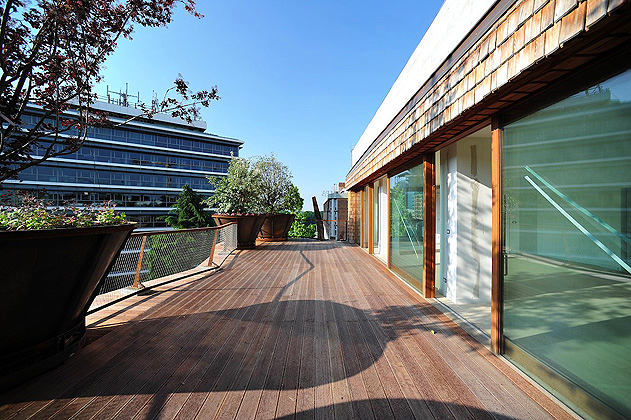 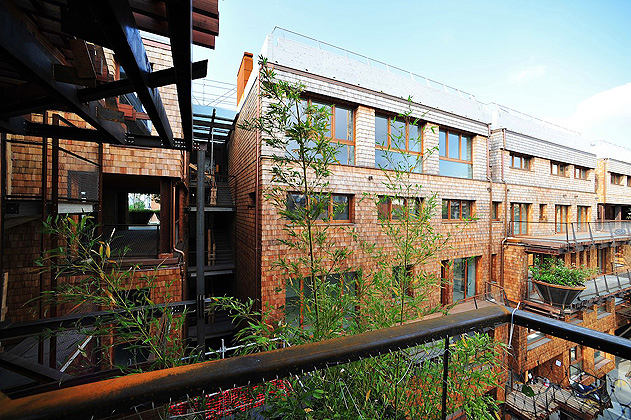