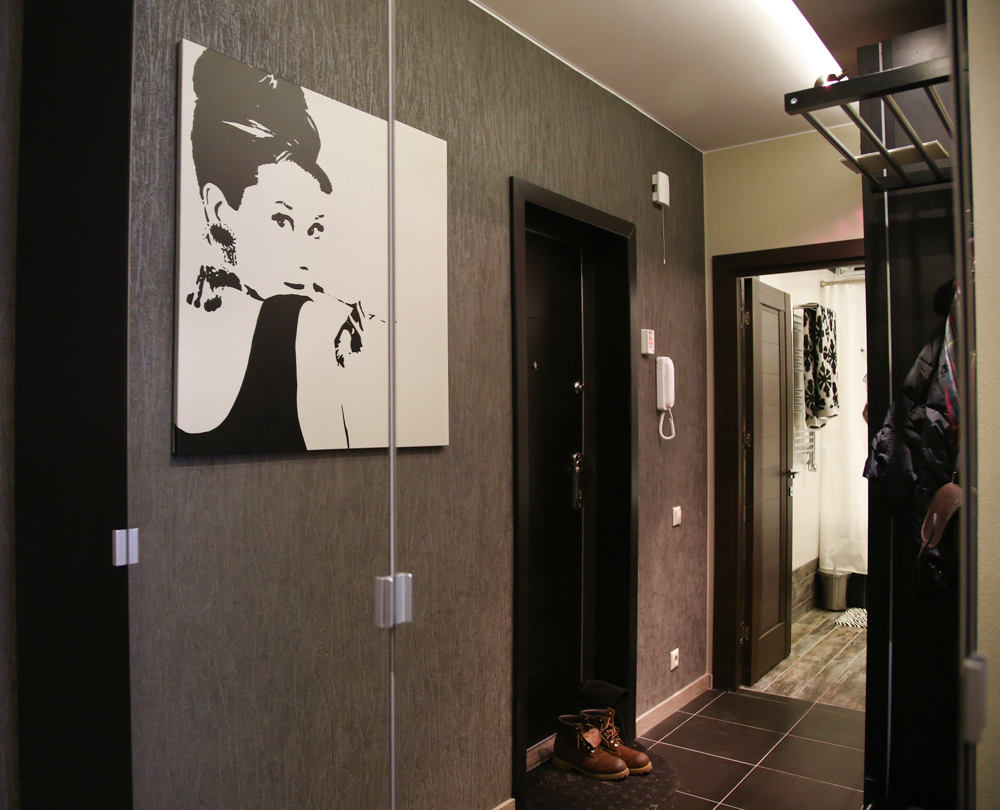 How to make a bachelor apartment attractivestylish and not like a "den"? Is it possible to place a living room, kitchen, recreation area and enough storage space at 40 meters? We look at a real example from Moscow Quite often the apartment of a lonely man is called a "bachelor den". But today we want to present a project that the language does not dare to call a den. This is the most stylish (albeit small - only 40 square meters) space, emphasizing the good taste of its owner. To transform his apartment, the owner turned to architect Valery Kalyuzhny and designer Olga Povarova. Valery Kalyuzhny, architect Olga Povarova, designer

As you might have already guessed, the customerinterior is a young man up to thirty years old, with the marital status of "single". His passion is travel to tropical countries, where he enjoys surfing and practicing yoga. The final plans for the apartment were not known, the young man could stay in it himself or rent it out, which was also considered an alternative. Therefore, they decided to make the interior universal, so that it would be good both for one person and for a small family. Olga Povarova, designer: - The customer wanted from a one-room apartment with a separate kitchen and a corridor to make a studio apartment with the ability to quickly organize a separate bedroom. This desire was due in part to the fact that he himself did not know whether he would live in it alone or would prefer to rent it out, perhaps to a small family. We had to design the apartment as functional, comfortable and effective as possible, and the implementation of this task required a minimum of effort and time. 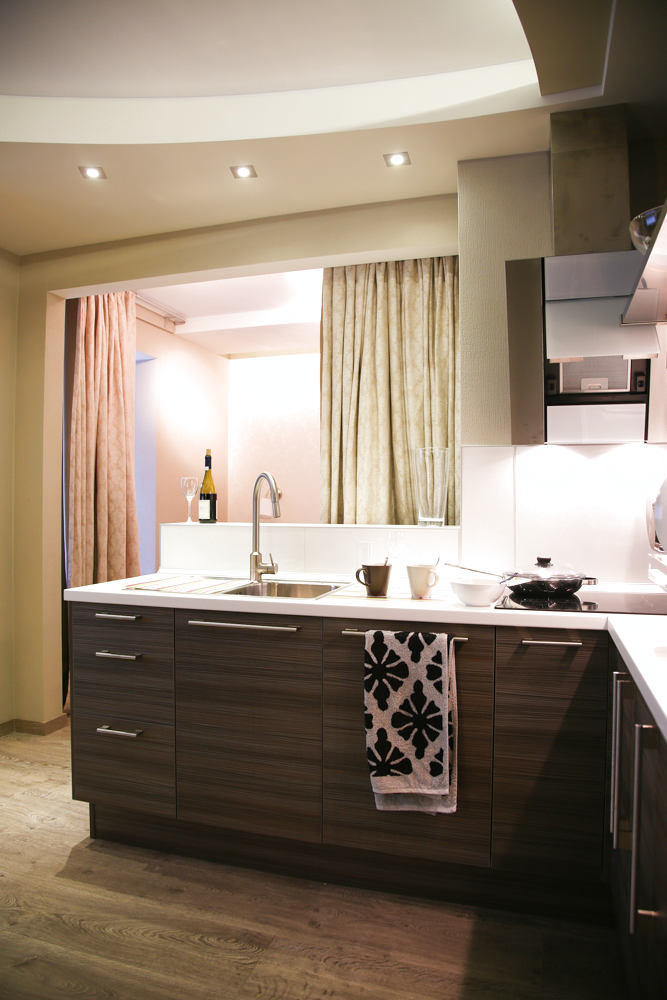 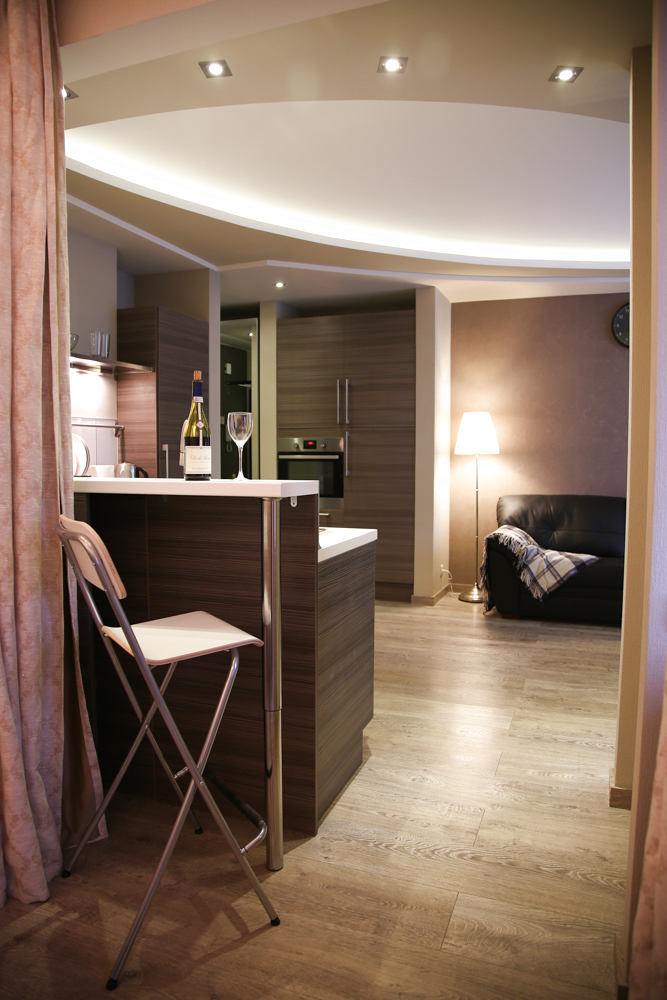 It is interesting that initially there was noAny partitions or walls. One of the main tasks set for the architect and designer is to make a modern and at the same cozy layout, which will not cause problems when approved in the BTI and other organizations. Valeria and Olga managed to do it, because the new layout was quickly certified and complied with all the rules and norms of housing exploitation. 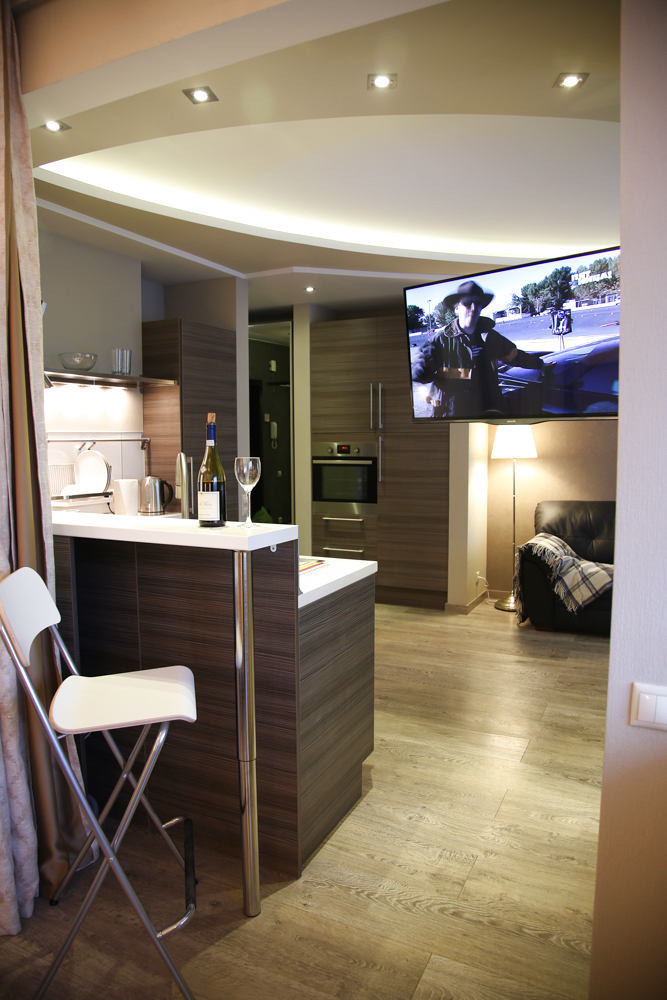 The color solution is conceived in restrained tones, likeA universal neutral background for further filling the interior with bright objects for future tenants. This decision was also dictated by the severity of male taste, in case the customer will live in this apartment. 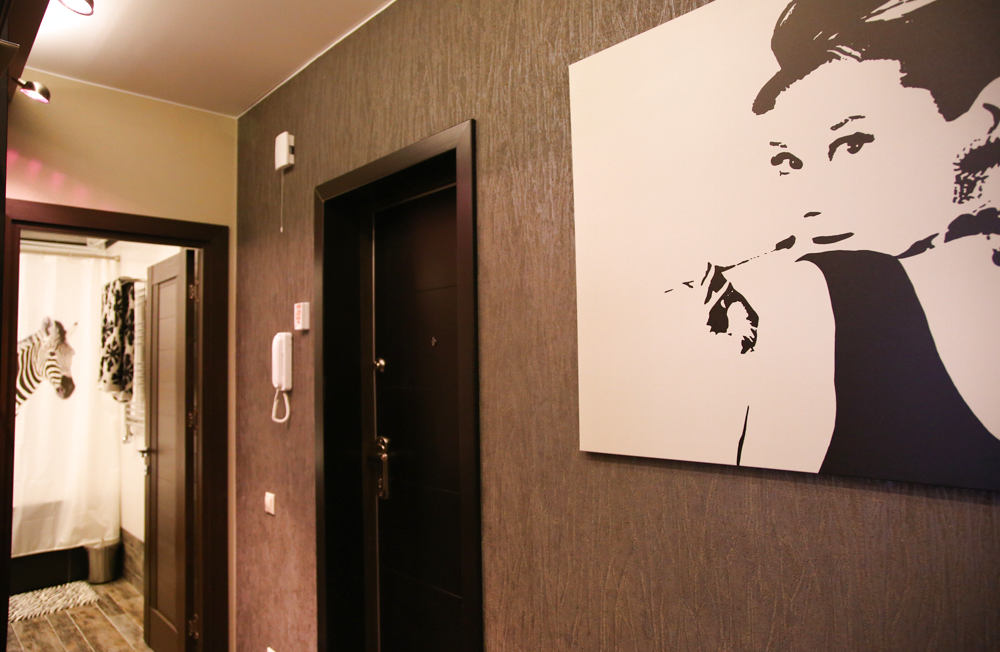 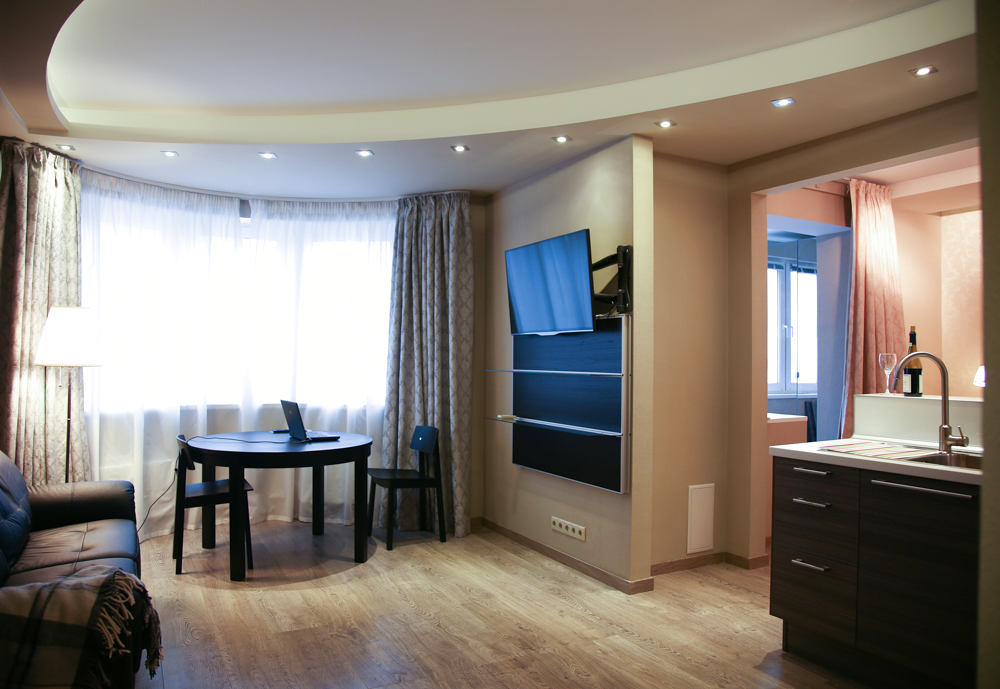 The landlord asked not to use thethe interior of the chandelier, so as not to clutter up an already small space and give it more dynamics. Therefore, it was decided to illuminate the studio with built-in lights, light buses and light pockets. Valery Kalyuzhny, architect: - We selected lamps according to the catalogs of the German company SLV and found that some of them have analogues in IKEA, which we used.

Bedroom in the niche

Initially, the owner of the apartment was asked to doa zoning partition between the bedroom and the living room, but in the process of work the customer abandoned this idea. He preferred blackout curtains from IKEA, which were then improved in the atelier, stitching to them another front and a special inner layer. This was done for additional noise isolation. Olga Povarova, designer: - Part of the niche was intended for partitions, which in the end the customer decided to use as a storage system for his belongings. 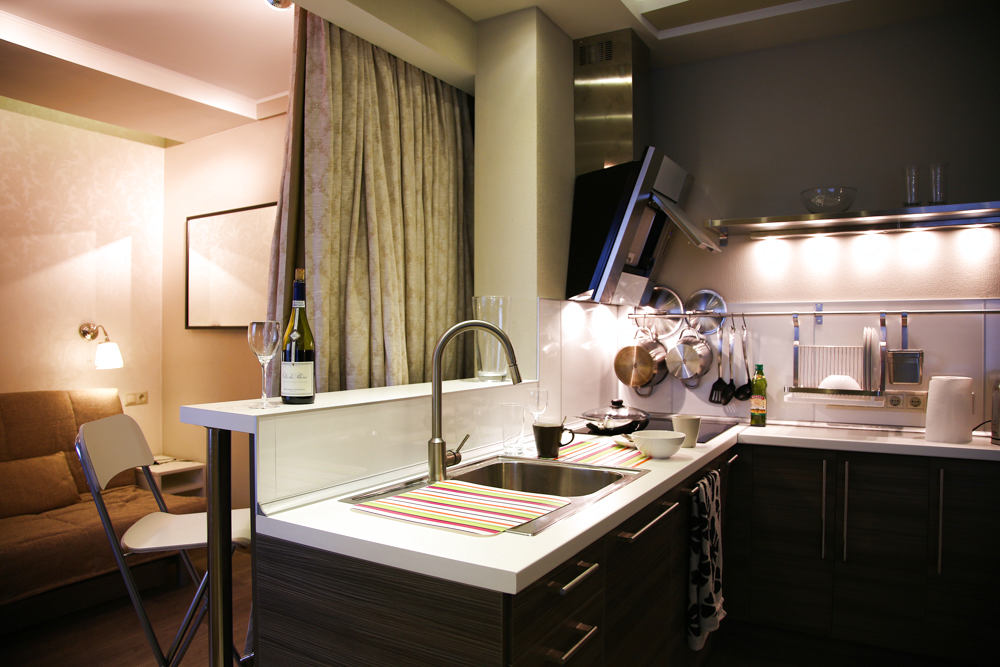 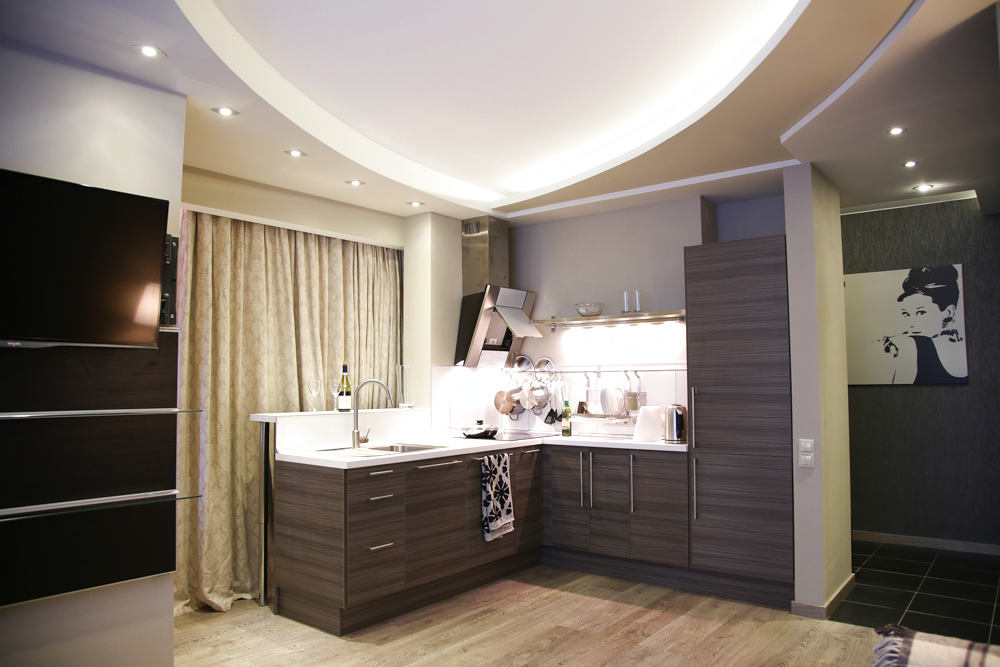 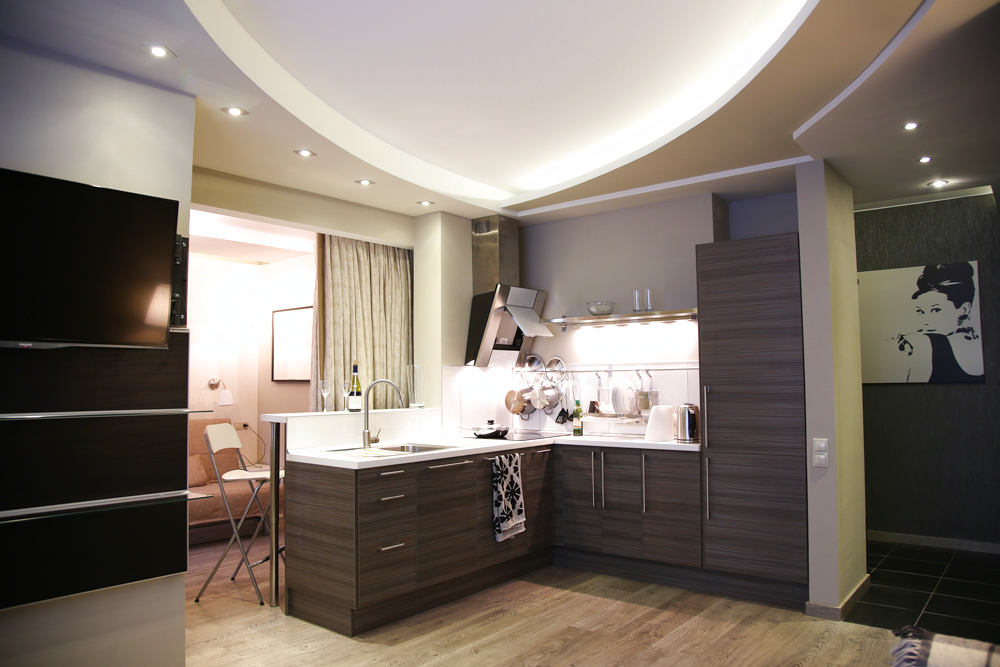 Through hardship to the stars

In any project, during implementation, there aredifficulties. This interior is no exception. Valery Kalyuzhny and Olga Povarova faced two main difficulties. Valery Kalyuzhny told us exactly which and how the specialists dealt with them. Valery Kalyuzhny, architect: - The most difficult part of the project was to lay the sewerage system to the kitchen sink. Functionality came first, but not at the expense of aesthetics. We managed to realize this without erecting podiums, which are usually used in such cases. We calculated the required slope and laid it in the wall. The second difficulty was finding a swivel bracket for the TV. We have dealt with this too. As it turned out, there are already brackets that meet not only technical but also aesthetic criteria. 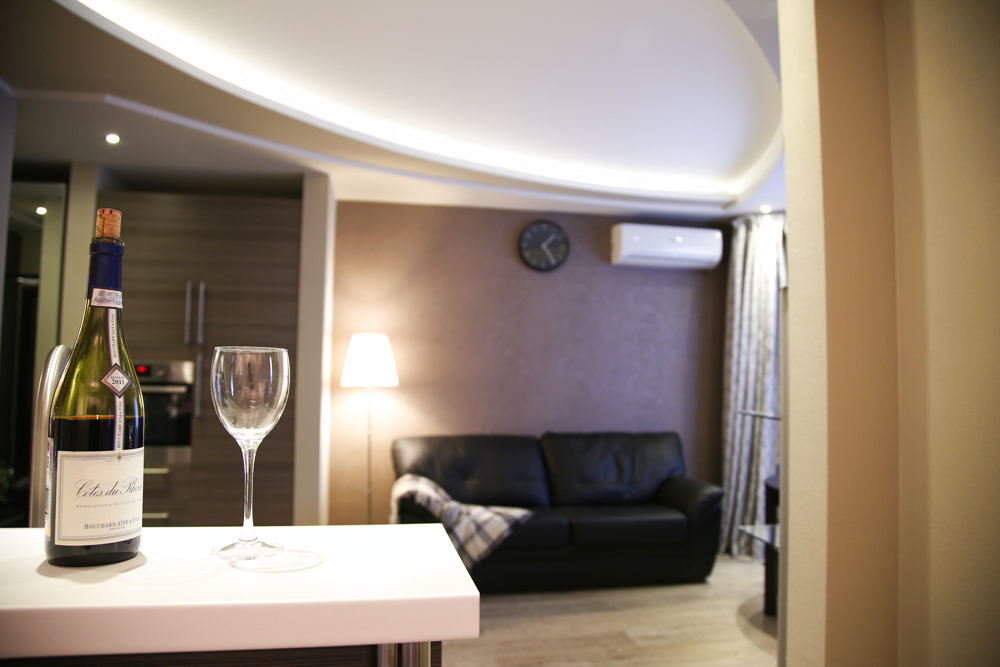