In this collection you will see the interiors created bynot only on the "fertile soil" of the modern free lay-out, but also in standard apartments and even in low-rise buildings. Over the past year, we have become acquainted with a variety of interiors of very different style and price orientation. The most interesting of them we gathered in today's selection of the best interiors in 2014.

1. Light treshka for a young family

Designer Natalia Komova had a serioussweat over it - to realize all that was conceived, we had to bring the heating to the balcony and connect it to the living quarters, make an opening in the bearing wall and even paste the wallpaper in the bathroom. However, for all the unconventionality and even originality of many and many zadumok (which only the Scottish cage in the toilet costs), the interior turned out to be quite traditional and even classical, and what is most pleasant - many of the techniques can be quite useful for our standard city apartments . This is home to a young couple of bankers, and althoughthe building was already 15 years old as it celebrated the centenary, the brickwork in the living room of the architect Dina Salakhova had to be put back from the loft bricks brought straight from the northern capital. The cabinet is also equipped with a cabinet, and it is designed in such a way that in the future it can easily be converted into a nursery. As for the always-urgent and always-urgent issue of storage systems, here it is solved in two stages - wardrobes are hidden in the bedroom and living room, but only a very attentive reader will find them. This is for a young and active bachelorprojected, oddly enough, two quivering girls - Elizaveta Pyshneva and Julia Tyuryakova. Unlike the established opinion about the male interior, this one, although it is rather ascetic in places, turned out to be prettiest. First, there are a lot of storage systems here, and do you think only women can have a lot of things? - and they are arranged in such a way that not every guest will be able to detect them from the first time. Secondly, the monochrome color scheme is effectively complemented by red accents. And most importantly - anyone in this interior will discover for themselves something new and quite applicable in their own home. Pay special attention to the kitchen and the hallway. 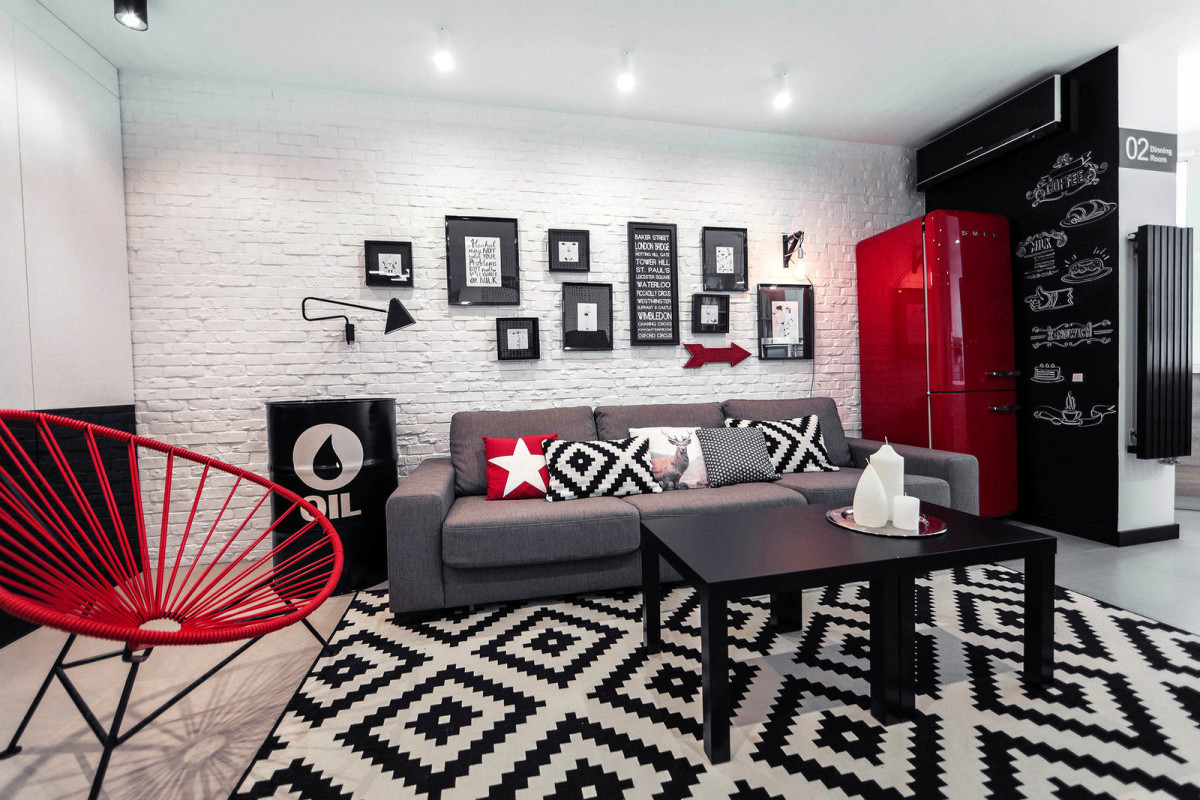 Like the previous one, this one was created for oneowner, only this time the owner was the girl. However, this is the similarity of the apartments does not end there. This interior is made in the same monochrome manner, but there is much more white here, and due to this bright spots of red do not look so aggressive. As a result - the general mood here is much softer, calmer and more voluminous. It was achieved due to competent work with light and accents. Separately it is worth noting that the author of this interior was not a professional designer, but his passionate admirer - blogger Melina Devani (Melina Divani). 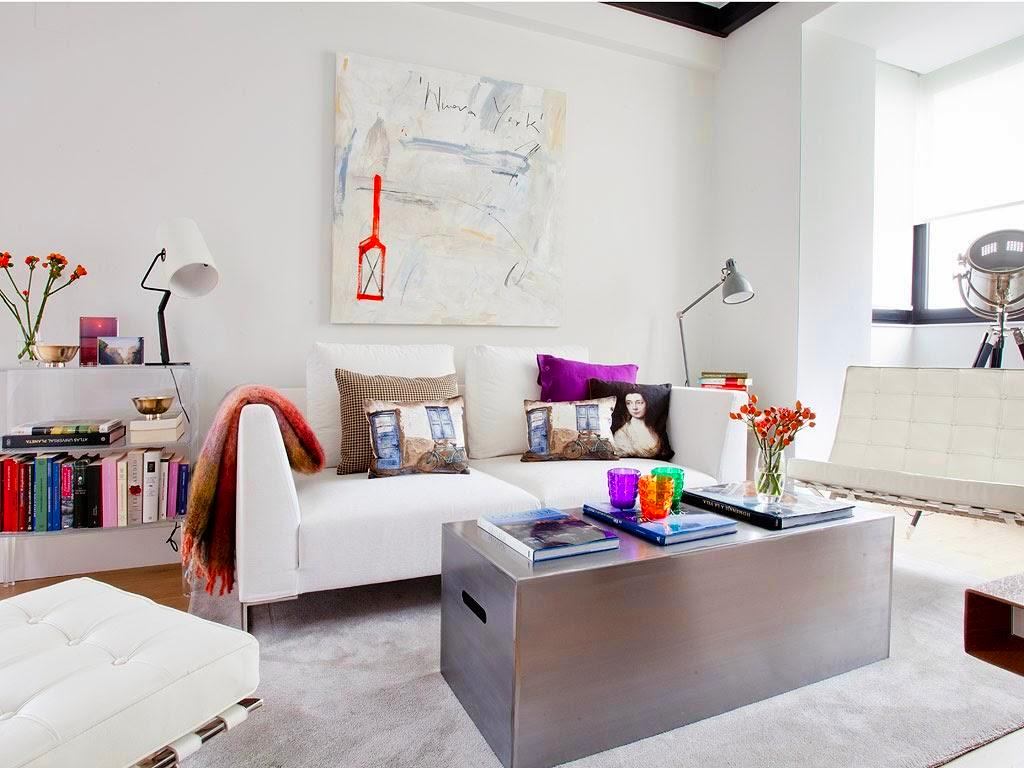 In this architectural workshop SVOYA studioclearly felt the author's style and, as a result, great attention to detail. As in other projects, architects focused on natural materials and flawlessly "played" part with simple geometric shapes. The interior turned out to be moderately minimalistic, modern, architectural and surprisingly cozy. It's a pity that his main zest - gorgeous views of the Dnieper - has remained behind the scenes. 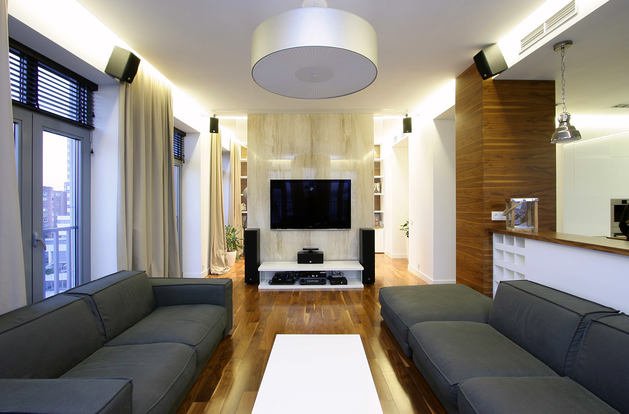 Mysterious style of intelligent eclecticismreveals itself in all its glory. Designers Inna Tejoyeva and Zina Broyan combined several styles, times and trends under the roof of a modern building. We must give credit - the material fell into the hands of the authors: all the supporting walls were located along the perimeter of the apartment, allowing the imagination to soar almost unhindered. 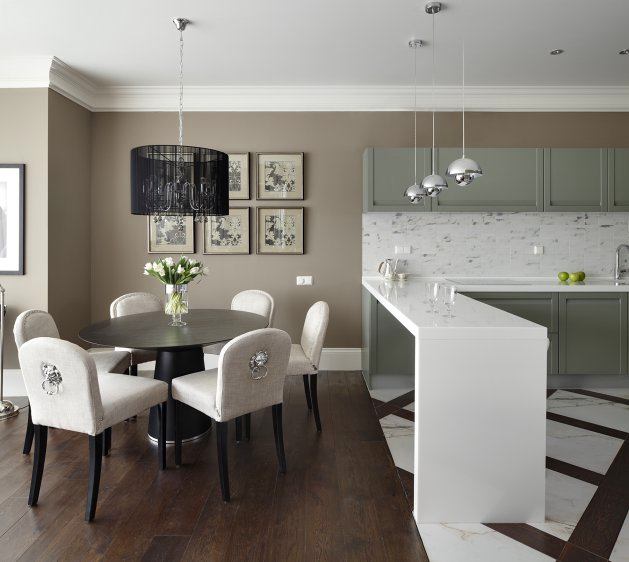 7. Two-level apartment with an attic

What does the child need to develop comprehensively? Architects from the workshop of Ruetemple answered unequivocally: freedom. And they created for the family with two children not constrained by partitions and walls, dazzlingly light and. There is a lot of light and little furniture, which means that games can be very diverse. And how the guys will develop imagination, we even think of fear. A special plus of this apartment is the ability to change the atmosphere with an easy movement of the hand, simply placing a few accents. In this you can fall in love, just looking out of the window -from here a completely dizzy view opens up to the park in Moscow. However, the directors of Geometrix Design also managed to create an excellent frame for it. Light, light and truly luxurious interior, created primarily for rest and enjoying life. A bright detail is the kitchen that merges with the wall. This model is designed in such a way that does not attract attention, and as if performs only decorative function. However, it is also very practical, which, incidentally, can be said about many details of this interior. 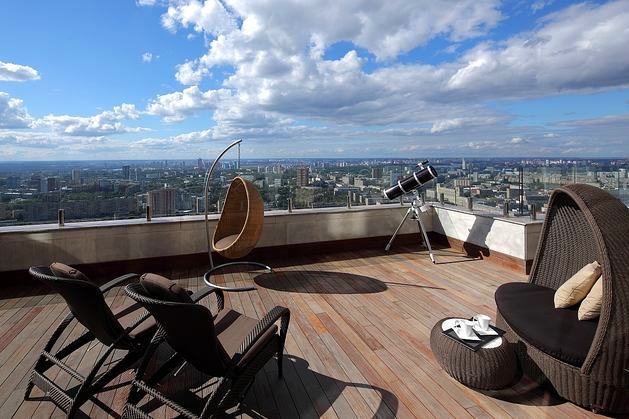 9. Monochrome Romance in the New Riga

In this designer Lena Inashvili succeededto realize his old dream - to make a pink shade in the palette. Taking into account the fact that the house turned out to be half classic, the author's ability to organically enter such controversial shades into a monochrome environment can be safely attributed to super abilities. As for the second stylistic half of the interior, it was decided to perform in the modern direction. As a result, the house turned out to be classic enough to hold back and receive guests of any level, and modern enough not to forget about the XXI century outside the windows. 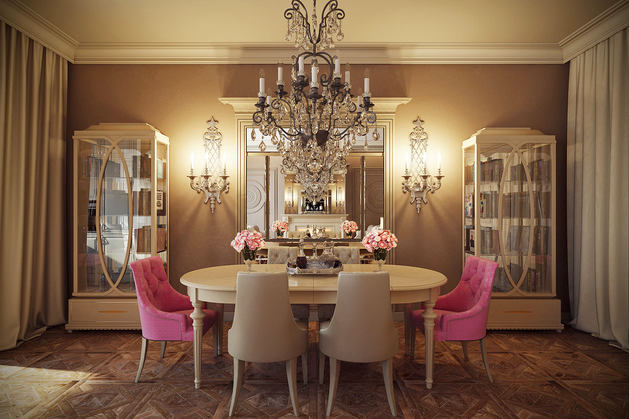 10. The house in Pavlovskaya Sloboda

Unexpected symbiosis of classics and FrenchProvence in this subdued our editors with warmth and some extraordinary sincerity. The house, designed by designers Marina and Anton Fruktov, was prepared for people of the old school, their children had already grown up, and in life, at last, a period of stability and contemplation began. Classics in itself was quite an obvious solution, but the pine trees behind the windows and the light nature of customers spodvig authors to slightly rework the heavyweight style, adding a bit of sand colors, soft forms and the nostalgia of Provence. It turned out exceptionally great!

The 10 steepest small apartments published in 2014

The 10 most unusual apartments we wrote about in 2014