Modern kitchen design adapts toactual conditions: the population of the planet grows, places are less and use it is functionally and witty. The results are impressive: in our article 20 of the most stunning examples To use the space optimally, both technical and design solutions will be useful. The first, as by magic, will help find additional areas for storing everything you need, for example, using mobile furniture modules. The second will create a feeling of lightness and airiness, even in the closest room. One thing is for sure: the best minds are now working to make your kitchen brighter, more efficient and more convenient. The invention of the Polish design studio Studio Rygalik: a modular kitchen consists of elements reminiscent of industrial wooden boxes on wheels. Cabinets, counter tops, hobs, oven and refrigerator are filled with the most modern kitchen equipment from Siemens. The number of possible combinations and accommodation options is incalculable. 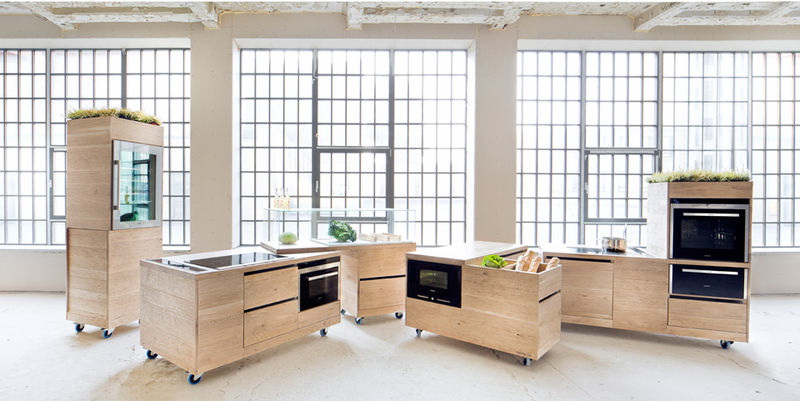 Plate Hi-Fire from the Brazilian designer FernandoSilva (Fernando Silva) is invented for a very specific (and growing) target audience - singles and small families. It does not require a lot of space, it is ergonomic, safe, and it's easy to clean. A transparent door allows you to watch the preparation of food without opening the oven once more. Miniature kitchen B21b from the German designerKurt Friedrich (Kurt Friedrich) is going to elementary, as a children's designer, but works in full force. There is even a sink and a hob. Ideal for offices, summer houses and hostels. Italian factory Stosa Cucine has created a kitchenMilly, based on the current ideas of flexibility in the use of space and a modular approach. The smooth curved lines of the kitchen island with open shelves create an elegant and modern look. The doors of the lockers open to the left or to the right - with one touch, without the use of handles. Brazilian designers Fernardo and Umberto Campana(Fernando and Humberto Campana) the kitchen of Shaping Silestone is compared with a Swiss knife - as it hides effective gadgets, and additional useful surfaces are built into the countertop, easily retractable inside. The island itself consists of three "peninsulas": one with a sink, the second with a stove and the third - a place for rest. The result resembles a sculpture from the Museum of Modern Art, while the object is extremely functional.

This kitchen from the American factory ResourceFurniture is not in vain called "hidden" - Stealth Kitchen. All its components - a sink, a stove, even a refrigerator - hide behind the facades of an elegant modular cabinet. In a closed form, it will perfectly fit into the fashionable cuisine in the minimalist style. But it is necessary to open the doors - inside the whole world. Additional elements can be added until the room has run out of space. The architect Jean-Michel Vilmot (Jean-MichelWilmotte) came up with a kitchen that successfully disguised as ordinary furniture. The extract of the collection La Cornue W resembles a lamp of bold design, a plate - a dining table, an oven - a chest of drawers. The main idea is the spirit of innovation and refined hedonism, characteristic of the French way of thinking. By the way, the kitchen is very convenient: for example, the main burner is located in the center of the surface, and the rest of the area can be used for preparation. Kitchen Clei Ecooking is created in Italy. Designer Massimo Facchinetti took care not only of ecology - a vertical column in which hoods, a stove, a refrigerator, a washbasin, even a mini-kitchen garden are built, it is capable of working with solar energy if placed near a window and saves water by double filtering and redistributing used. And all the construction in the folded form takes only one and a half square meters at a height of about two and includes even a stool working and as a place for storing small things. Kochinsel, kitchen of German industrialdesigner Remo Zimmerli, looks like a compact mobile cube. Nevertheless, there is a stove and even an oven. Inside - a portable gas tank that allows the construction not to be tied to one place in the house, just move it to where it is more convenient for you to cook today: in the living room, in the corridor or on the balcony. A large number of lockers, drawers and shelves, too, can not but rejoice, only the shell is missing. Kitchen Hidden Kitchen German factory Warendorffully corresponds to its name. The wooden panel, folded by means of a simple button press, hides all its working part - a sink, a table top, a stove. Ideal for kitchens combined with bedrooms and living rooms. The color of the facade is reminiscent of rust - a stylish and relevant solution for lofts in the industrial style. Bright and stylish storage system Friday Foodinvented by the Italians Luca Boscardin and Valentina Raffaelli from the Dutch studio Fridayproject not only to save space, but also as a training project. Its design resembles the traditional image of the food pyramid - at the bottom are stored products that are more healthy, such as vegetables and fruits. At the top are sweets and spices, which you need to eat moderately and accurately. French designer Arthur Senant (Arthur Senant)Vulcan calls his plate "a hellish machine". It works on firewood - a place for them and for many other things is provided on the built-in shelves. This is a stove, and a convenient storehouse of useful things in one. The idea of ​​a full life on a limitedspace, which saves time and resources thanks to ingenious design, is now very popular. The micro-kitchen from General Electric was specially created for. Inside the candy bar there is a microwave stove, a refrigerator and all the necessary household appliances, as much as possible reduced, but not lost efficiency. While the project is at the concept stage, but production is about to begin. Do you dream of a kitchen island, but there is not enough space? Designer Tim Thaler (Tim Thaler) offers an unexpected solution - to hide the designs ... in the floor. It is raised by one click of a button in your smartphone (there is a special application). Everything is absolutely safe - the hydraulic lift can withstand almost 700 kilograms and will not work by accident, only on your command. Ana Arana, a young designer fromSpain, the kitchen Gali has created, focusing on the needs of singles. A place for it can be found even in a very small apartment, and it is possible to organize the working space very differently and under the mood, so that cooking does not turn into routine. Modules include all the most necessary - storage boxes, surface for the preparation of ingredients, a sink and a refrigerator. The refrigerator of the American company U-Line is smallerstandard in two times. You can install it inside the kitchen island or under the countertop. There are enough places for everything - six wide shelves and two different temperature zones will help to store fruit and ice cream in one place. Kitchen EON 2 designer Branislav Varnicic(Branislav Varnicic) "spinning" around the mobile bar. The swivel panel can act as an additional working surface or an element for separating the cooking zone from the rest area. Such a simple solution allows you to play with space, adapting it to your needs. 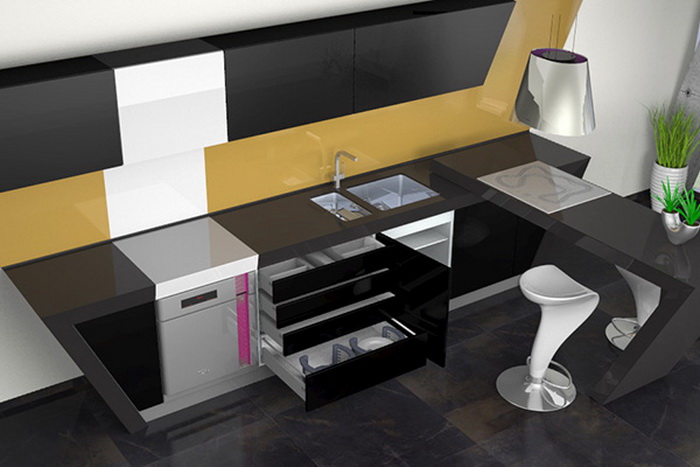 Capsule micro-kitchen with a touching name LOLOstudio Aotta is designed primarily for offices. Three of its elements (each resembling a chicken on thin legs) include a microwave, a kettle, a coffee maker and a place for storing cutlery. Bright colors and touching design - the drawer handles resemble bird's beaks - will revive even the most dull atmosphere. Kitchen iFood Italian Chiara Daniele (ChiaraDaniele) is a complex interactive system. The panel on the refrigerator door allows one touch to control the temperature of the oven and water in the faucet, the speed of cooking, to recognize their weight and useful properties. While this is just an idea, but very attractive, which means it is potentially in demand.

Overview of the most unusual houses with drawings and prices - etk-fashion.com

This you have not seen: the 5 most unusual materials in the world

Live on the island: the 6 most unusual dream islands