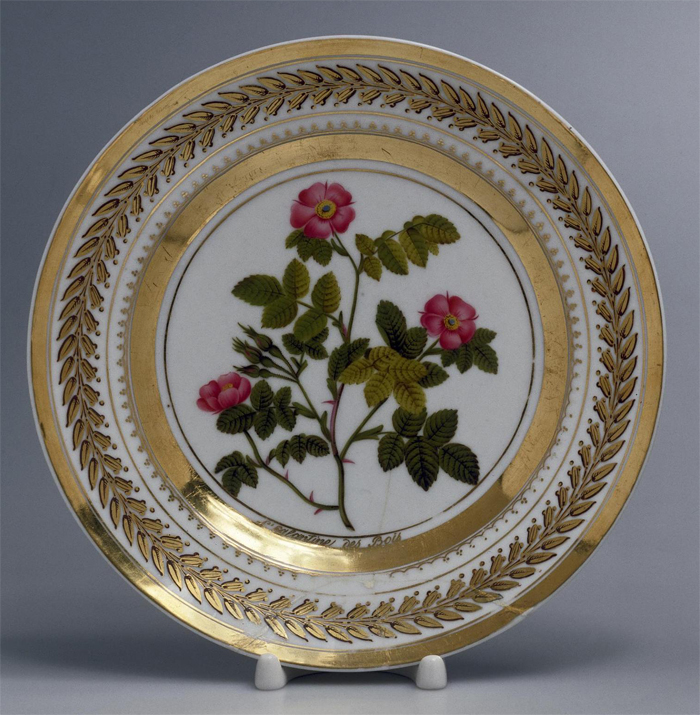 We know that porcelain has always been in high demand,But the fact that Russian porcelain at one time was almost world-famous, we, to our shame, did not know. With this material we are rehabilitated and fill in the blanks

Graduated from the Faculty of Philosophy of Moscow State University. Lomonosov (2011), since 2008 professionally engaged in antiques. lermontovgallery.ru

- The very first porcelain products were called "whiteGold "and kept only in treasuries. Although with the development of porcelain production magnificent white cups and saucers became available not only to the royal people, elite porcelain could still afford only important persons. Today, in the era of practical plastic dishes, porcelain antiques of famous Russian factories can become a real pearl of any table.

Feature of antique porcelain sets, vasesor figurines is that they do not depend on fashion trends and to this day speak eloquently about the wealth of their owner. Time has no power over porcelain either - products made of this material are capable of performing their functions for decades, because they are highly durable and are not susceptible to the influence of microorganisms. Luxurious antique porcelain tableware perfectly keeps warmth, preserves the taste and aroma of dishes, so it is perfect for serving a modern table both on weekdays and on special occasions. And miniature figurines made of snow-white porcelain will organically fit into any type of interior. Imperial Porcelain Factory

The Imperial Porcelain Factory (IPP) isFactory-legend, from which the history of the production of china in Russia began. It was the IFZ who made unique items that glorified the Russian masters. To the old porcelain of the IFZ the collectors of the whole world show great interest, which in many respects explains the prices with six zeros for the porcelain of the Russian tsars. Since the IPE produced porcelain forImperial Court, there was no need to adjust to the mood of the masses. Thanks to this, the quality and artistic value of the porcelain of this plant were the highest. Especially popular were excellent service sets, the number of items in which could reach up to a thousand. 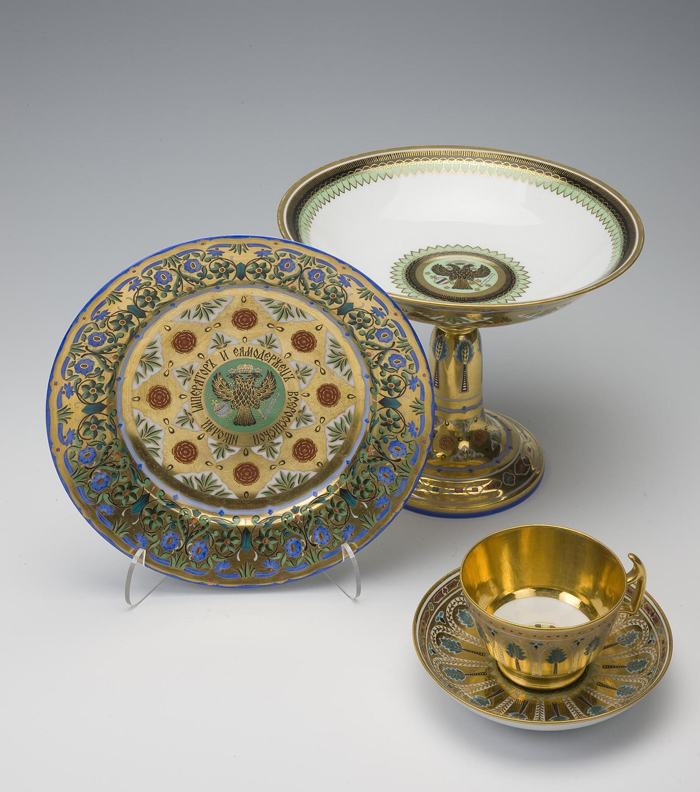 Vase for fruit from the Kremlin service. IPE. 1838 g 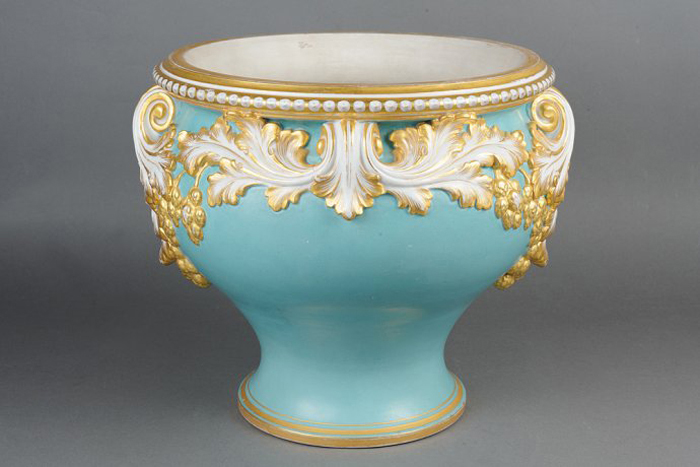 Plate with a slotted side. IPE. Second quarter of the XIX century 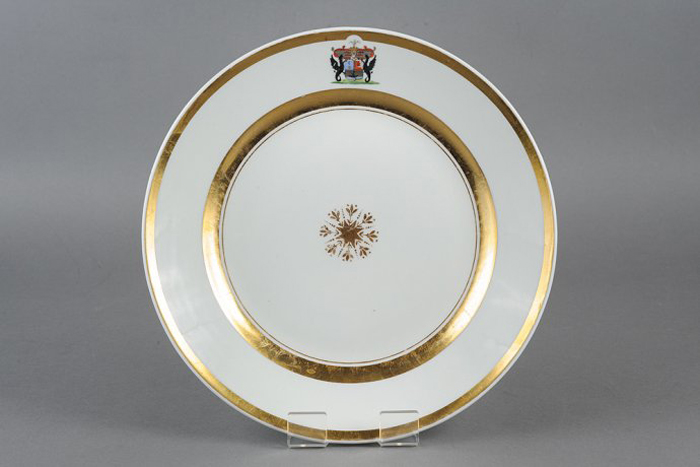 A plate from the noble service. IPE. The first half of the XIX century

Brief information about the plant. The IFZ was established in St. Petersburg under the name of the Nevskaya Porcelain Manufactory in 1744. The plant produced unique sets with a huge number of items, magnificent vases, dishes, sculpture, porcelain busts and much more. He continues to work successfully to this day, keeping production in full.

IPZ porcelain success secrets.The success of the enterprise began with the selfless efforts of D.I. Vinogradov in setting up production. Vigilant control by the imperial court, the desire of Catherine II to provide porcelain to the whole country and constant investment of funds turned the IPZ into the best porcelain manufactory in Russia. The wide popularity of porcelain was also facilitated by the stake on the best masters, advanced technologies, as well as the initially highest artistic level. Kornilov plant

At the end of the XIX century porcelain, created in the factoryBrothers Kornilov, outperformed the best in Russia porcelain IFZ in all respects. He was distinguished by an impeccable white shard, perfection of molding and glaze, originality of forms and magnificence of a list. However, the cost of Kornilov's porcelain was very expensive, so it did not have a mass demand, which determines its significant collection value. The antique porcelain of the Kornilovs, once accessible only to the upper strata of society, is now very expensive and is a worthy specimen of any collection. 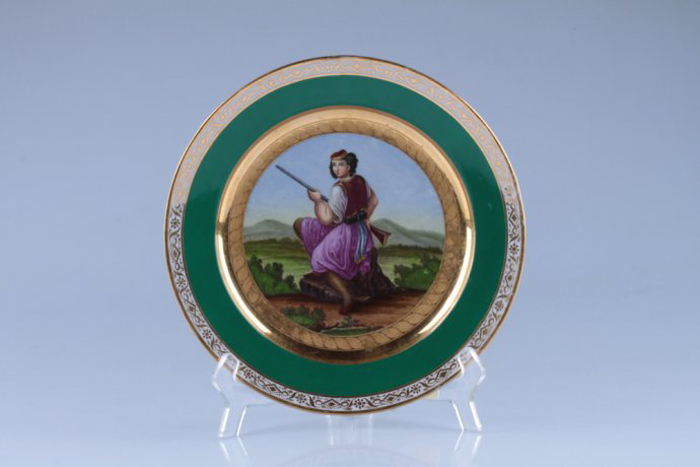 Plate from the series "Peoples of Russia". Plant of the Kornilovs. The middle of the 19th century 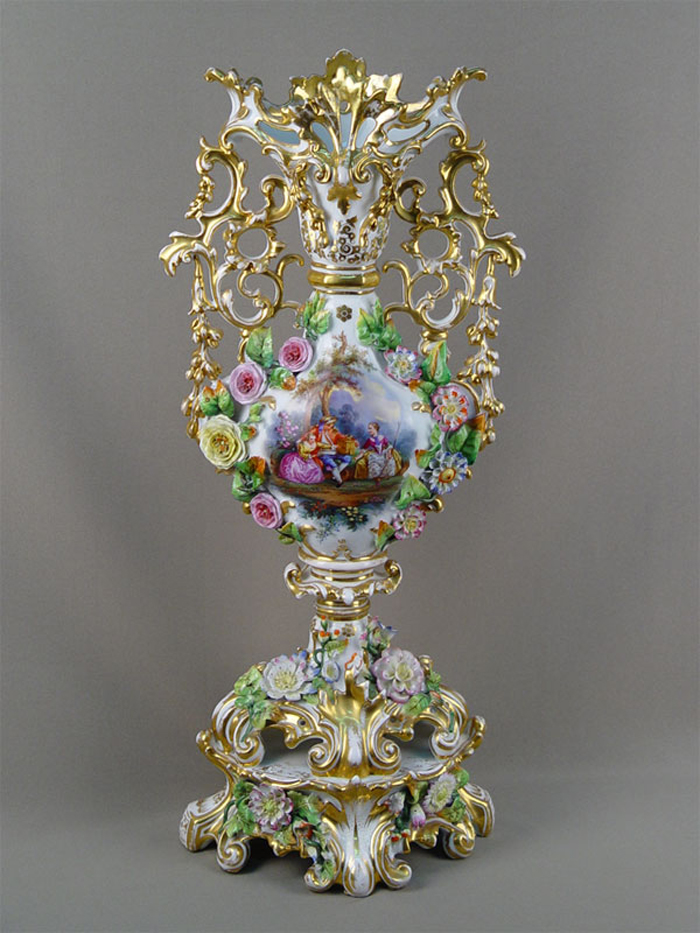 Brief information about the plant. The Kornilov Factory was established in 1835 in St. Petersburg. She produced dishes, vases, souvenirs, icons, church utensils, porcelain toys, flowers and much more, supplying porcelain to the imperial court and selling it in their stores abroad. In 1918 the enterprise was nationalized and converted into a factory "Proletary".

The secrets of the success of the Kornilov porcelain.The main secret of the plant's success can be considered the solidarity and interest in the success of the production of the entire Kornilov family. She relied on the best craftsmen and the latest technologies, the acquisition of the best raw materials and paints for painting, which ensured the highest quality of porcelain products. The range of products was huge and varied in the shapes, styles and techniques used. Popov's plant

Porcelain factory of the merchant A.G. Popova appeared in Russia at the beginning of the XIX century and in a short time became one of the best enterprises of his time in the production of porcelain. Products of the plant enjoyed great popularity both in the circle of the aristocracy and among the common people, which was due to the desire of the manufacturer to create the original porcelain of high quality. 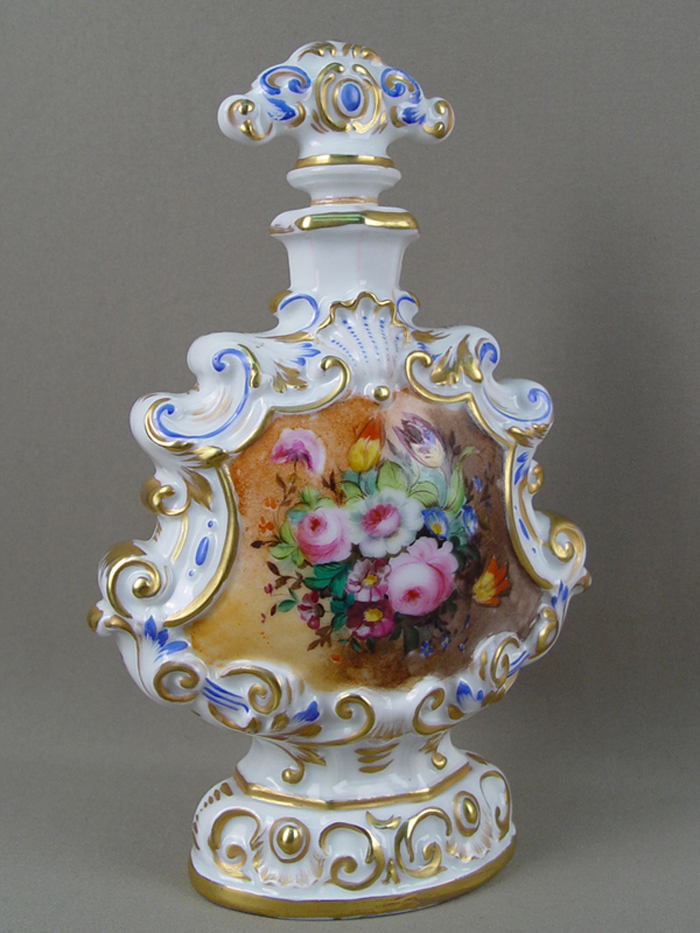 Starting with a simple imitation, the master of the plantPopov over time developed their own porcelain composition and created unique forms that allowed the enterprise to compete with the famous porcelain factories in Russia. 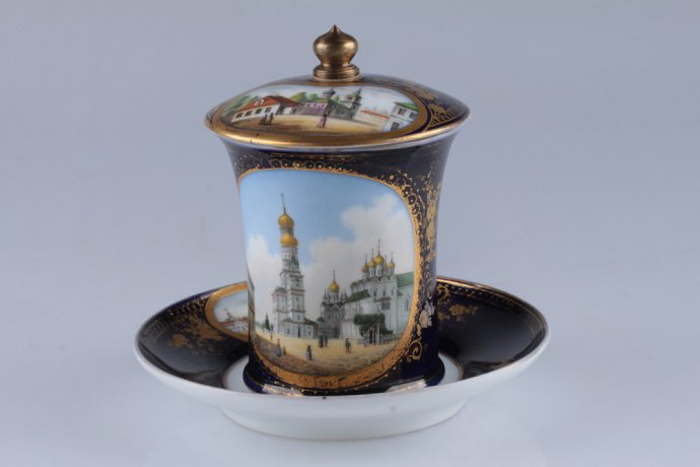 A glass with a lid and a saucer with a view of the Ivan the Great Belltower. Plant Popova. 1850s

The special success of porcelain Popov contributed toThe opening of a laboratory for the production of paints. Manufacture was the first in Russia, where they decided to create such a laboratory and eventually received a rare color scheme. A tea set. Plant Popova. The middle of the 19th century 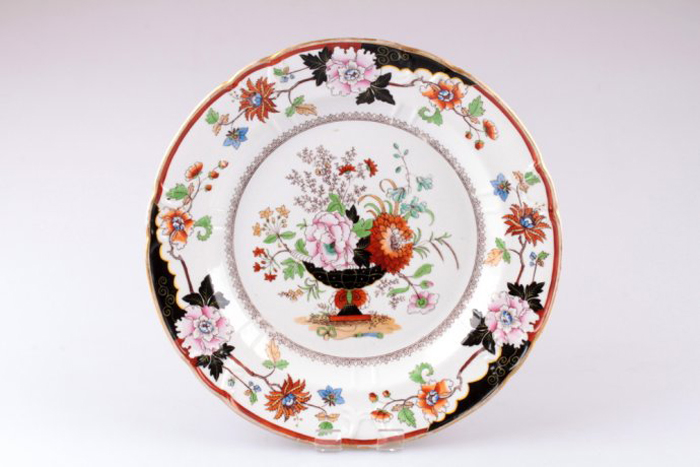 Plate in the style of chinoiserie. Factory Popova. The first half of the XIX century

Accurate porcelain figurines, cups, vases withA special color quickly attracted the attention of connoisseurs of porcelain elegance, so that the masters of the Popov plant gained fame, and today the antique porcelain of this factory is highly valued. Figurine "Plyasun". Plant Popova. The middle of the 19th century

Brief information about the plant. The Popov Factory was built in the Gorbunovo village of the Moscow province and was bought by AG Popov in 1811. The plant produced expensive sets, vases, tavern dishes, figurines, porcelain utensils for the home and had a staff of more than 250 people. It was closed in 1875 due to the unsuccessful conduct of business by the heirs.

Secrets of the success of Popov's porcelain. A. G.Popov was a great enthusiast, which forced him to constantly experiment. The factory created its own forms and recipes for porcelain, and also developed in its own laboratory a unique color range of paints for painting. This made it possible to create original works for people of different income levels. Batenin plant

Batenin's plant is among the most significantPorcelain enterprises of their time. In the XIX century, many dreamed of buying porcelain of the famous Imperial Porcelain Factory, but could not afford it. Realizing that this is a free niche, F. Batenin established the production of inexpensive porcelain, apparently similar to the products of eminent porcelain factories. He was characterized by abundant gilding, brightness of colors, popular forms and decor. Pay for the cheapness was due to the fact that the gilding quickly erased, but this did not in the least prevent the great success of the porcelain Batenin. 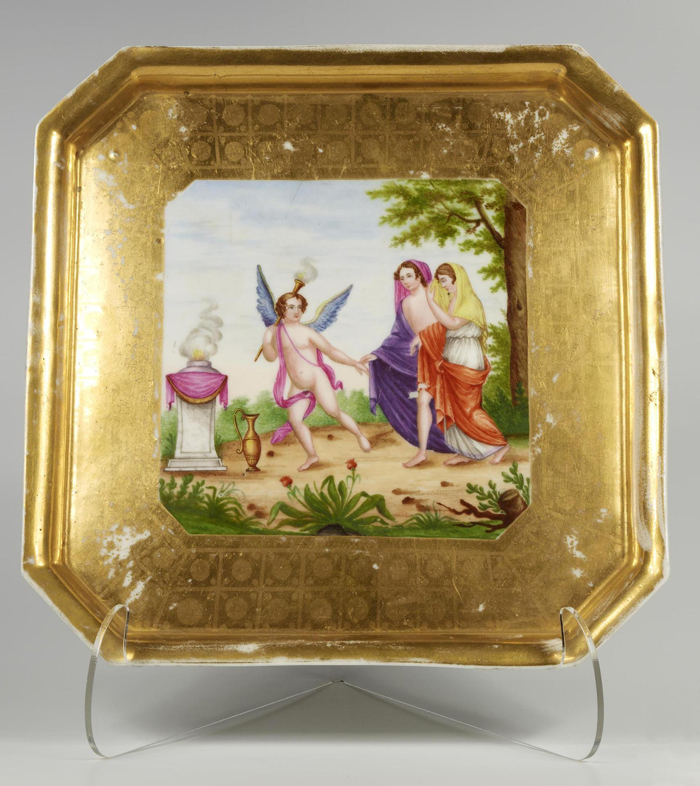 A tray with a mythological plot. Factory Batenin. 1820s Today, collectors willingly buy up not only the ceremonial porcelain antiques of the factory, but also simple dishes that have been preserved in small quantities.

Brief information about the plant. Factory Batenin appeared in St. Petersburg in 1811. Its main direction was the production of dishes and porcelain for everyday life. In 1838 the factory premises were destroyed by fire, and the production itself was sold until 1839.

Success secrets of Batenin porcelain.The owner of the factory relied on middle-class customers, making production as cheap as possible. He managed to organically combine the cheapness and rich appearance of porcelain. The products were created with great skill, were colorful and reflected fashionable themes, which became the reason for the great popularity of Batenin's porcelain. Yusupov plant

Porcelain of Prince Yusupov has a special origin. While other manufacturers moved the commercial component, the collector Yusupov created a porcelain painting workshop exclusively for replenishing his richest collection of works of art, as well as presenting gifts to important people. Cup and saucer with landscapes in medallions. Factory Yusupova. 1820s For services of antique porcelain Yusupovacharacterized by beautiful ornamental painting, originality, rich gilding of high quality and artistic miniatures. His dishes were decorated with Russian palaces and collections of eminent noblemen. Yusupov's antique porcelain is highly valued, but on sale it is very rare. A plate with a rose hip branch. Factory Yusupova. 1826 g

Brief information about the plant. The factory was founded by Prince Yusupov in 1818 in the Moscow estate of Arkhangelsk. She produced mostly dishes for the nobility, distinguished by great skill. In 1831, the company had to close due to the death of the owner.

Secrets of the success of Yusupov porcelain. The main secret of Yusupov porcelain can be considered as the prince's desire to create a unique highly artistic porcelain. His workshop was free from commercial race, which allowed to create truly unique works. The prosperity of the plant was also facilitated by the invitation of the talented master Sevres Lambert, the work with quality materials and the availability of his large collection of paintings and graphics, which was reproduced on porcelain.

Old porcelain is designed not only to decorate shelvesMuseums. As in former times, he is able to fascinate, inspire and surprise with his rich history, so he so captivates the views of people of different ages. Antique porcelain will continue to be out of fashion and time and can become an excellent relic of any family.