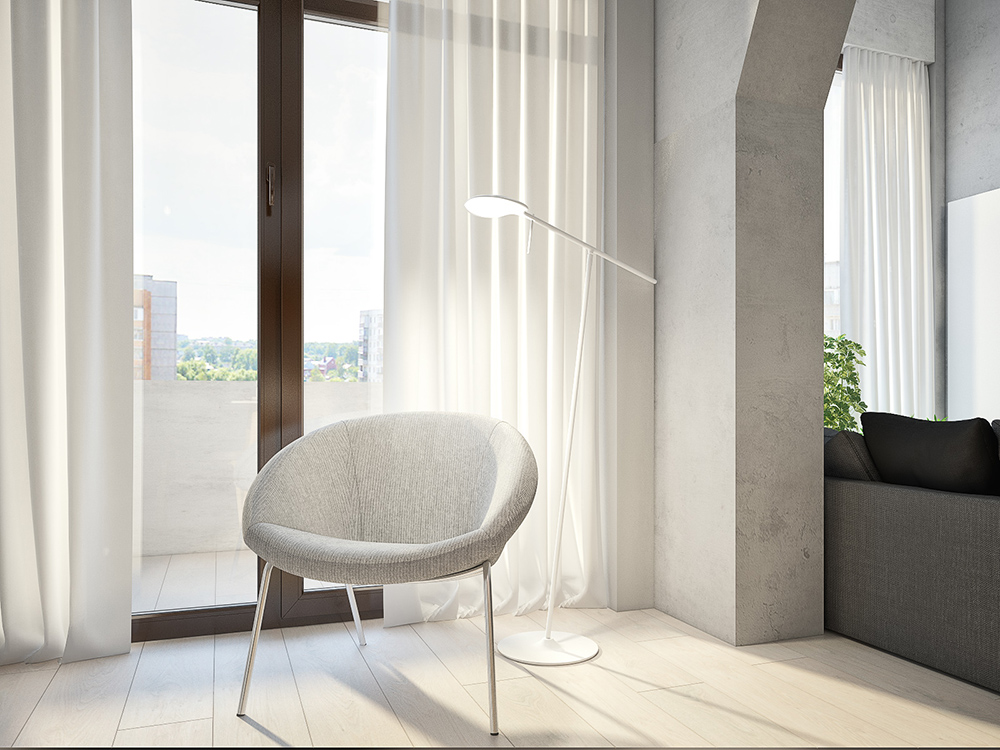 High ceilings, columns and large windows -Interior designer Stepan Bugaev emphasized the layout of this Moscow dvushka with a light color scheme and loft elements that are organically combined with the general Scandinavian mood of the interior. Today we are talking about the project of an apartment with an unusual layout: the apartments are located on the territory of a former factory, the design features of which are reflected in the architecture of a modern residential complex . The hosts are a young couple who spend a lot of their time working and prefer a family vacation, - Stepan Bugaev asked the interior designer to apply for an apartment in Scandinavian style using natural materials and a light palette. Stepan Bugaev, interior designer Graduated from MIPT with a master's degree in physics and SU HSE with a Master's Degree in Business Informatics. Has its own design studio, under his leadership, more than 500 design projects have been implemented. Included in the top 100 best designers, according to the leading interior edition of AD. He is a teacher of the School of Design of the Higher School of Economics, conducts the author's course "Interior Design. Rules for creating a successful project. " Performs with open lectures on the topic of interior design and writes articles for leading interior magazines and portals. Planning Designers had to work with a non-standard initial layout: in the apartment there were horizontal beams, ceilings 3,4 m high and huge windows. All these elements were decided not to hide, but on the contrary - to emphasize: for this concrete columns and beams were supported by smooth plaster, and the gray-white scale was diluted by graphic dark accents. Functionally, the apartment was divided into two zones: a public one, consisting of a living room, combined with a kitchen and a dining room, and a private one, which includes a bedroom and a bathroom. 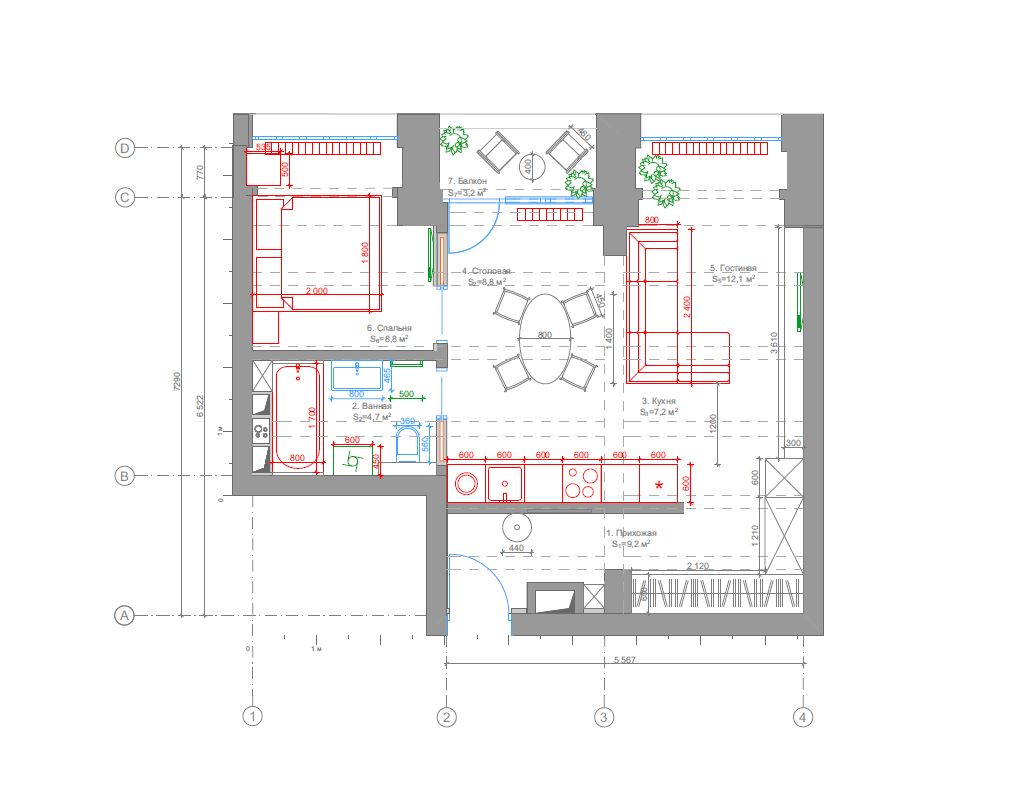 Stepan Bugaev, interior designer: - The main area of ​​the apartment was decided to give under the general space, because it is there hosts spend most of their time. The minimum area I took for the bedroom, as it is not the main room in the apartment. Corridor The space of the hallway is 9.2 square meters. M is mostly used for storage: along the two walls are spacious cupboards, and near the entrance there is a large mirror in the dark frame and an ottoman. The facades of the cabinets are divided into two parts and have different textures: one repeats the design of the interior doors and is made in white with panels, the second serves as a facade of the kitchen - for it a smooth wooden finish without handles was chosen. 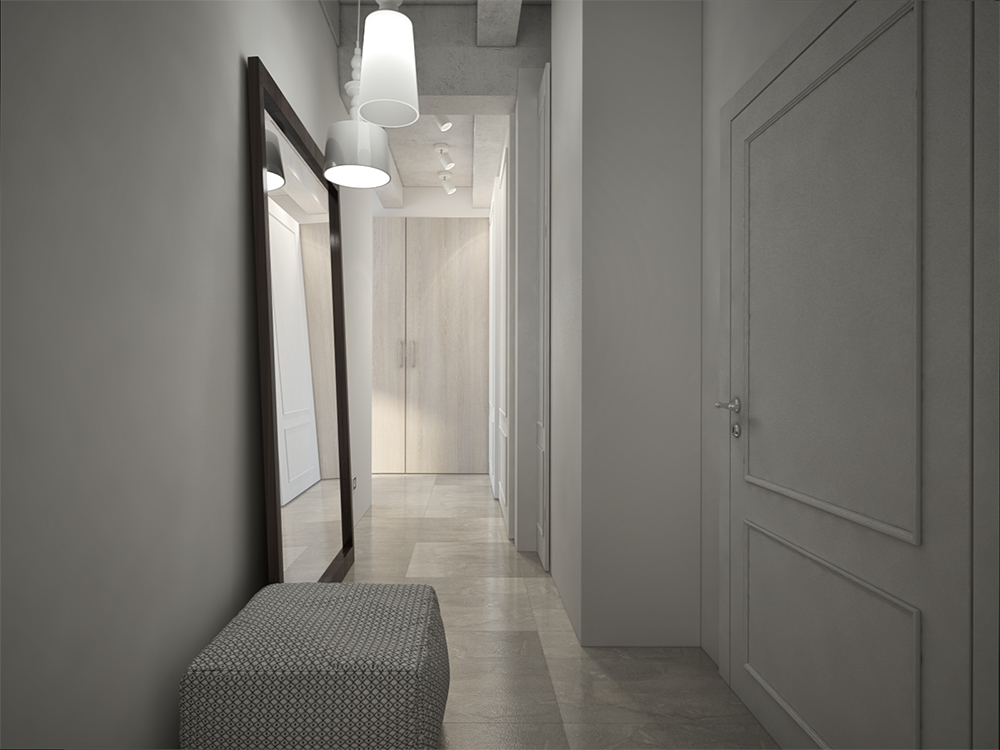 In the interior of the hallway, light shades predominate: The walls are made in white, and the floor is paved with gray tiles, stylized as a stone. The main emphasis is on the luminaire of the original form: one is made of flax, the other is ceramic. 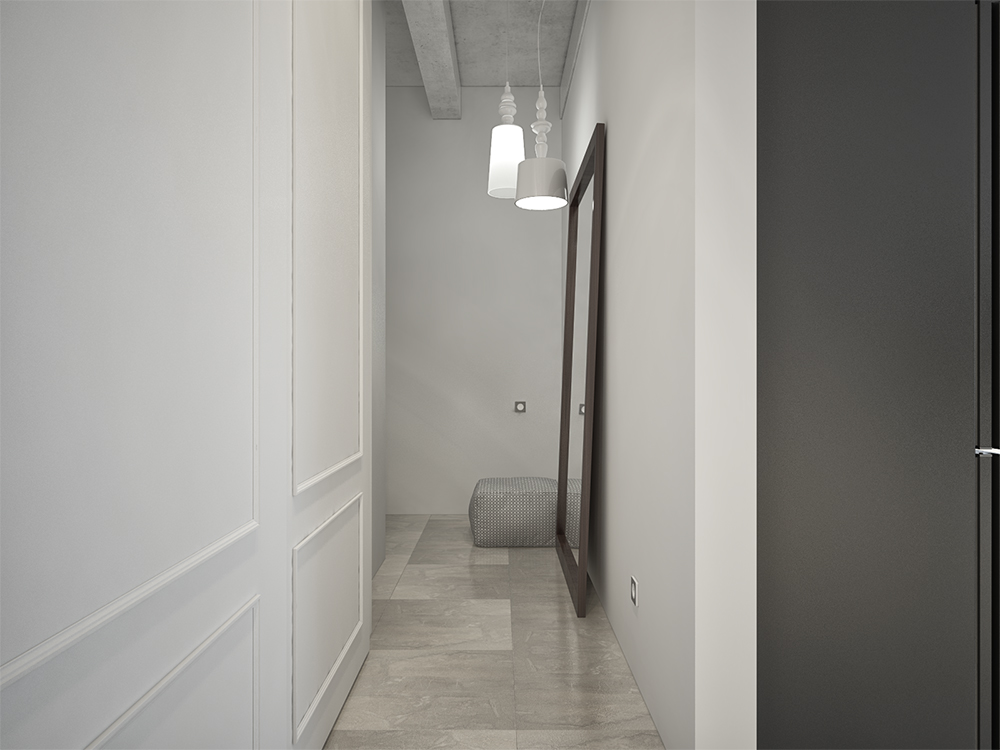 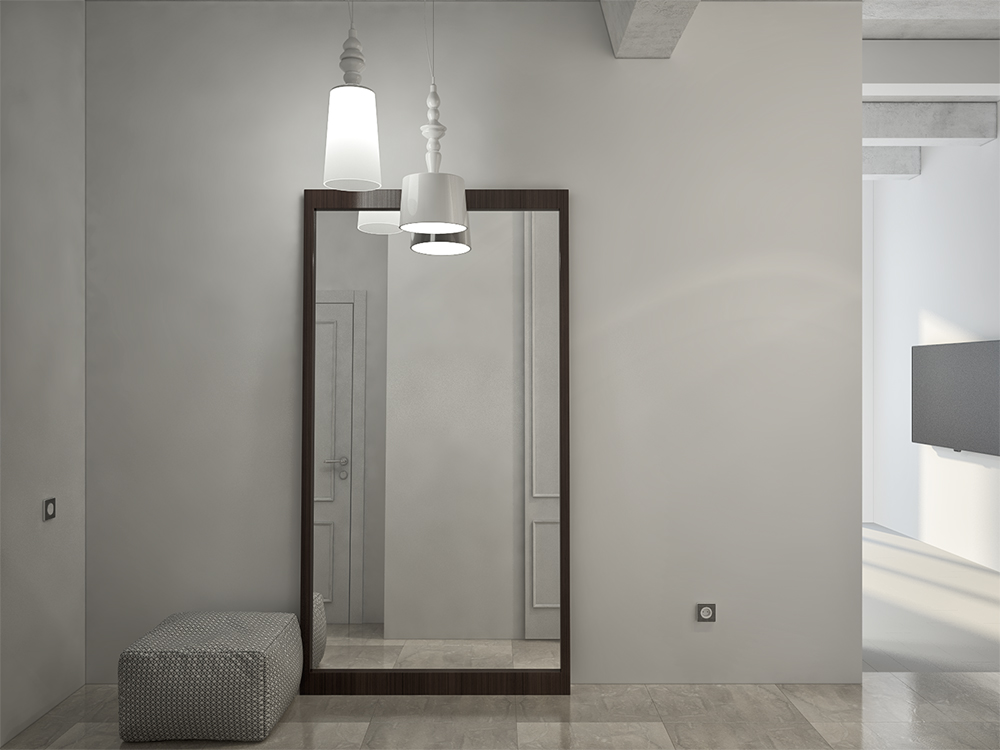 Public area In the apartment the kitchen is occupiedCentral position. It is executed in a minimalistic finish: hidden handles, smooth facades, chrome parts. Concrete ceiling with beams - the main feature of this zone. It is supplemented with loft elements: naked wiring and intentionally open hood pipe, supporting the overall style. For lighting the public zone, light bulbs on long cords meet. 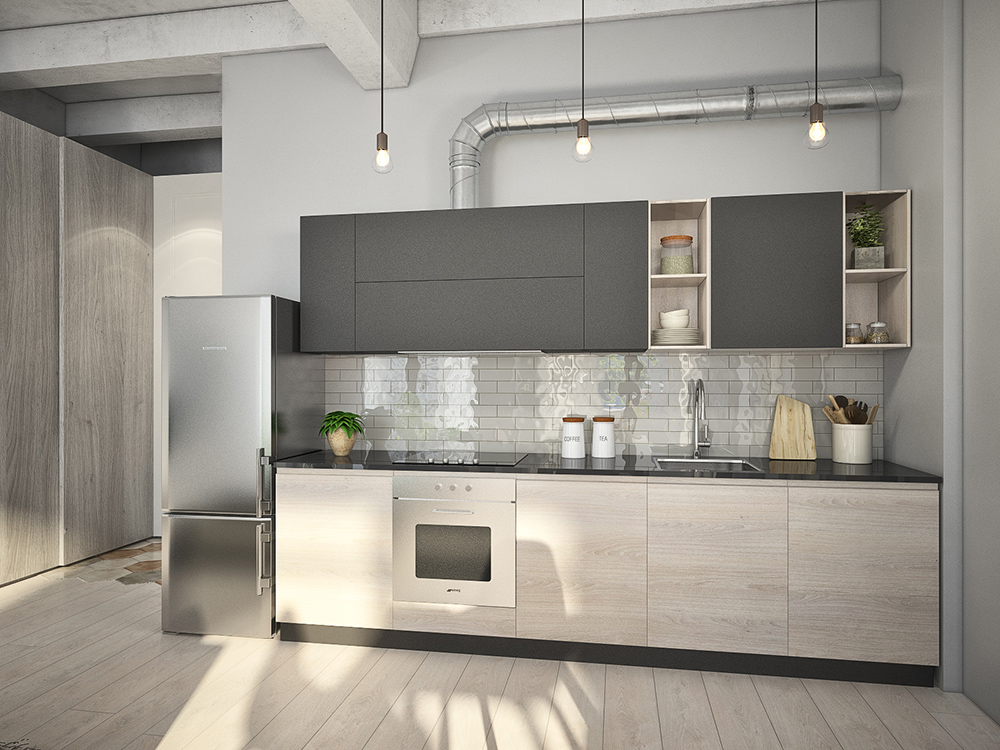 Stepan Bugaev, interior designer: - In the kitchen, I used an interesting technique - combined wood and plastic. This combination allows the facades look modern, and the kitchen - to be a harmonious continuation of the living area. 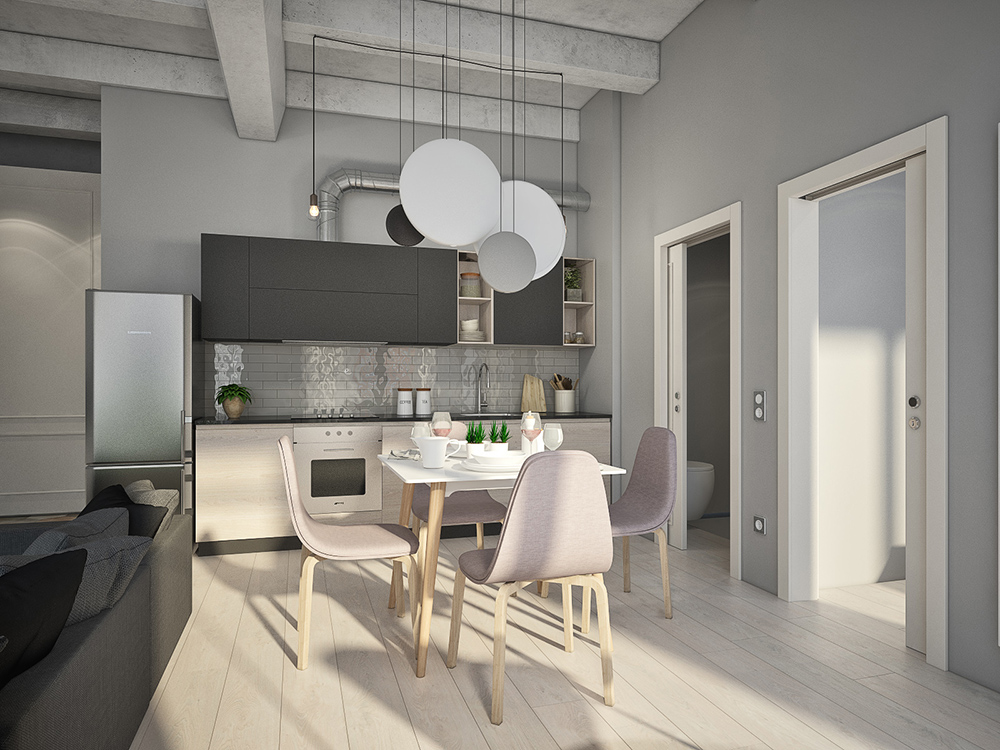 The central element of the dininglamp. It is represented by flat round shapes of different colors and heights, which create a voluminous composition and simultaneously act as a zoning tool. The dining area itself is a combination of different materials. The textiles of the chairs resonate with the decoration of the table legs, and the lamp combines all the colors involved in the dining group. 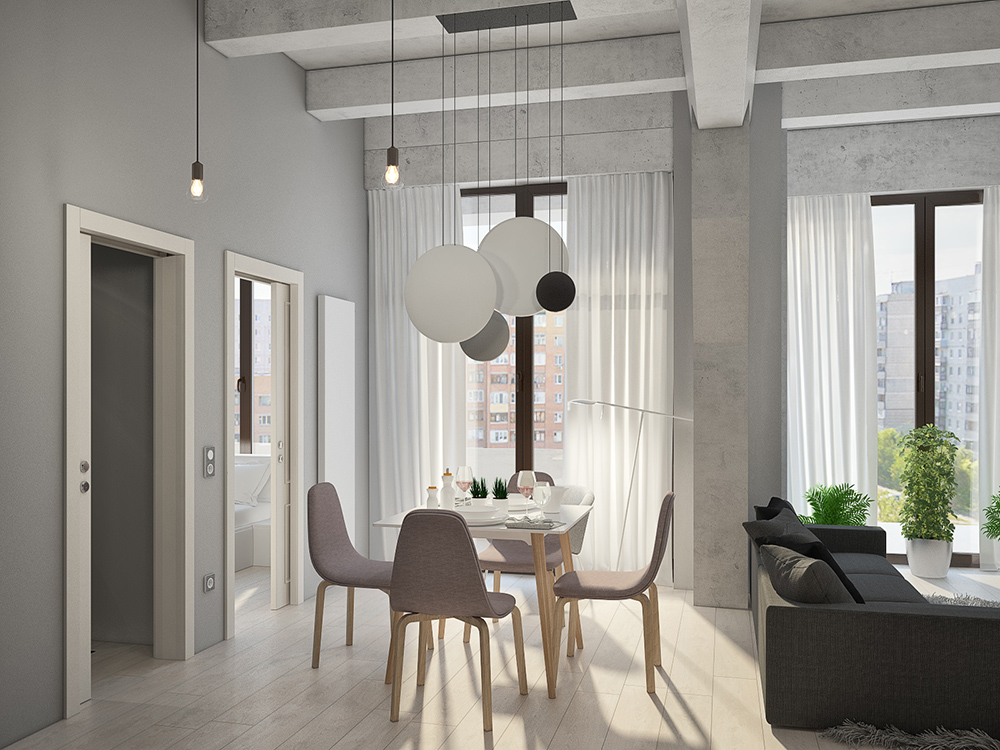 Living room area occupies a small spaceAn area of ​​12 square meters. M and is presented by a sofa, sustained in a dark gray scale, and a system of shelves for a TV. The sofa is located so as to visually separate the living room from the kitchen. The composition of the shelves in the TV zone introduces a variety in the interior: chaotically located on the wall, they combine open and closed elements. 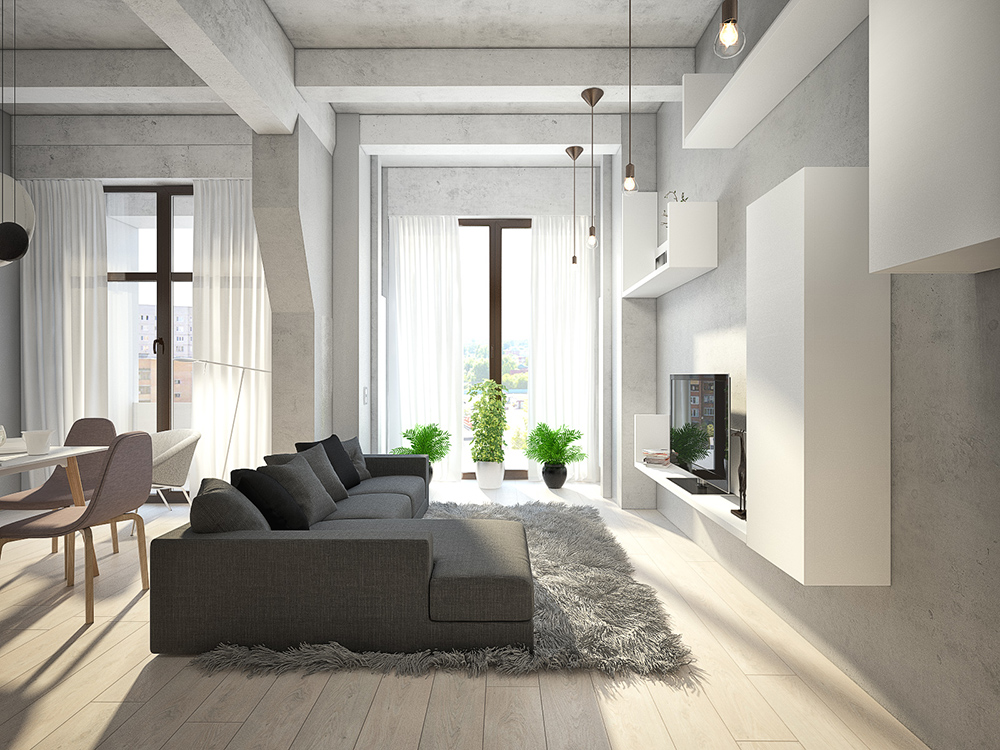 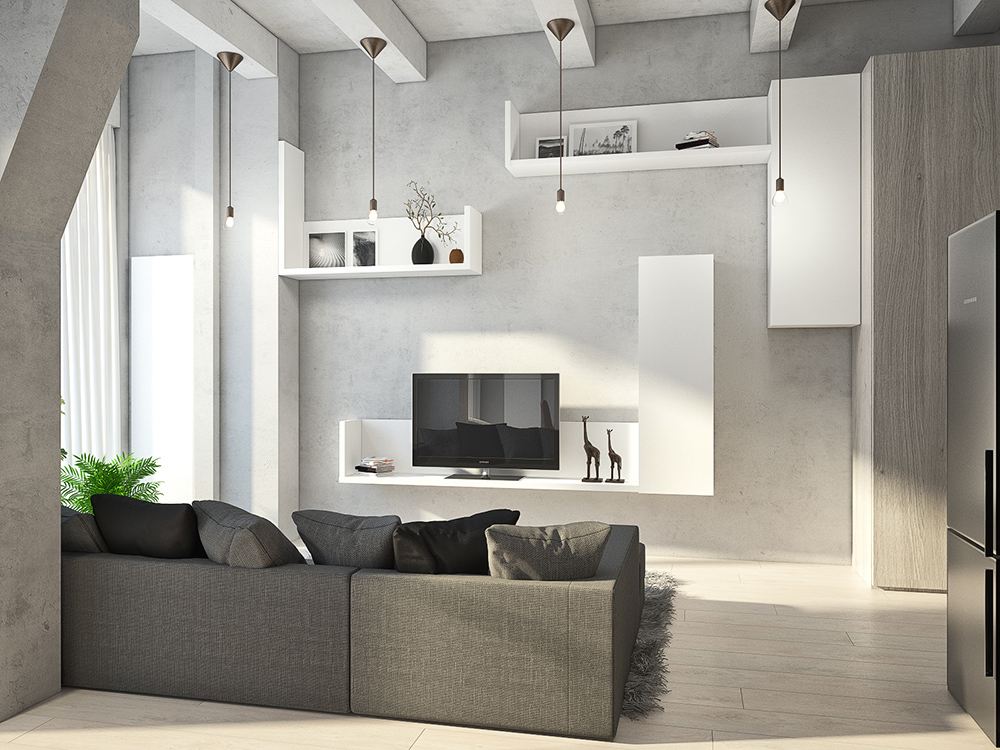 Bedroom Bedroom completely, and as aAccents are the moldings on the wall, creating a beautiful relief, and the black elements of the upper lamp. The hosts spend the least time here, so the bedroom performs a single function - it serves as a place for sleeping and rest. 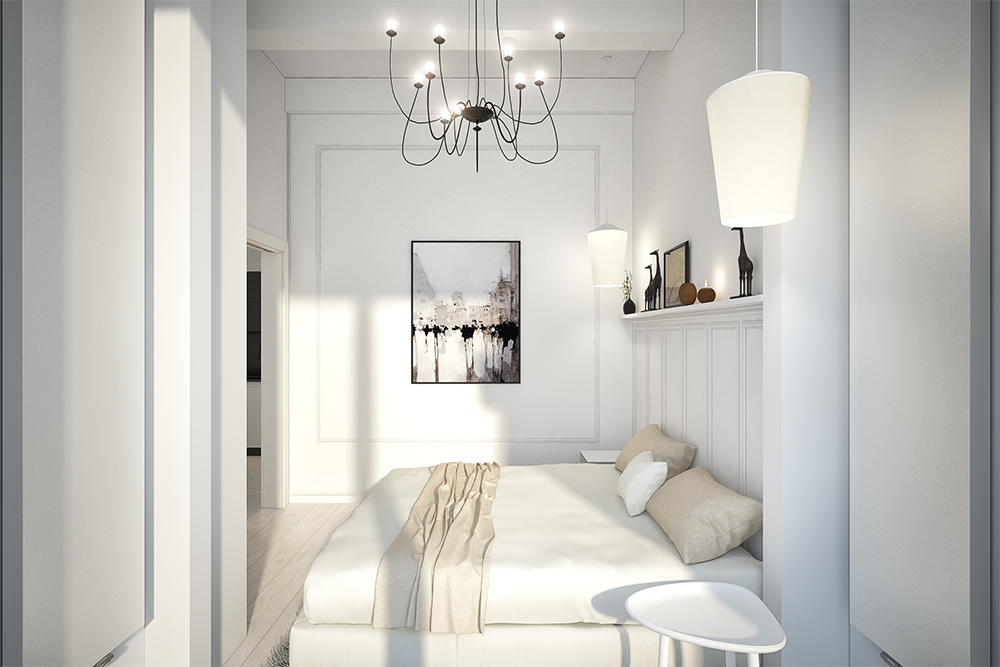 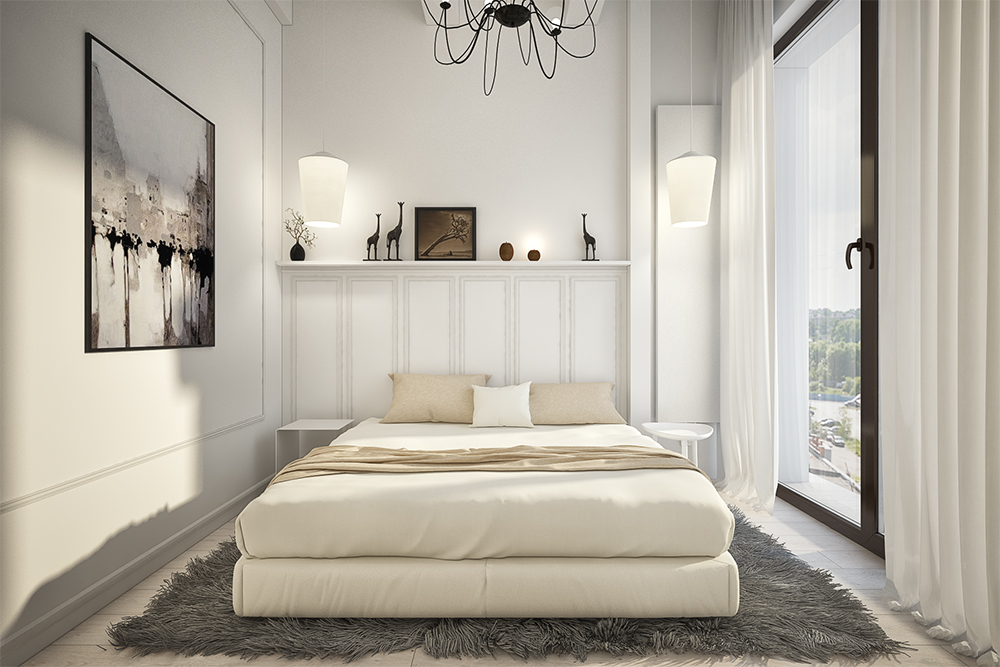 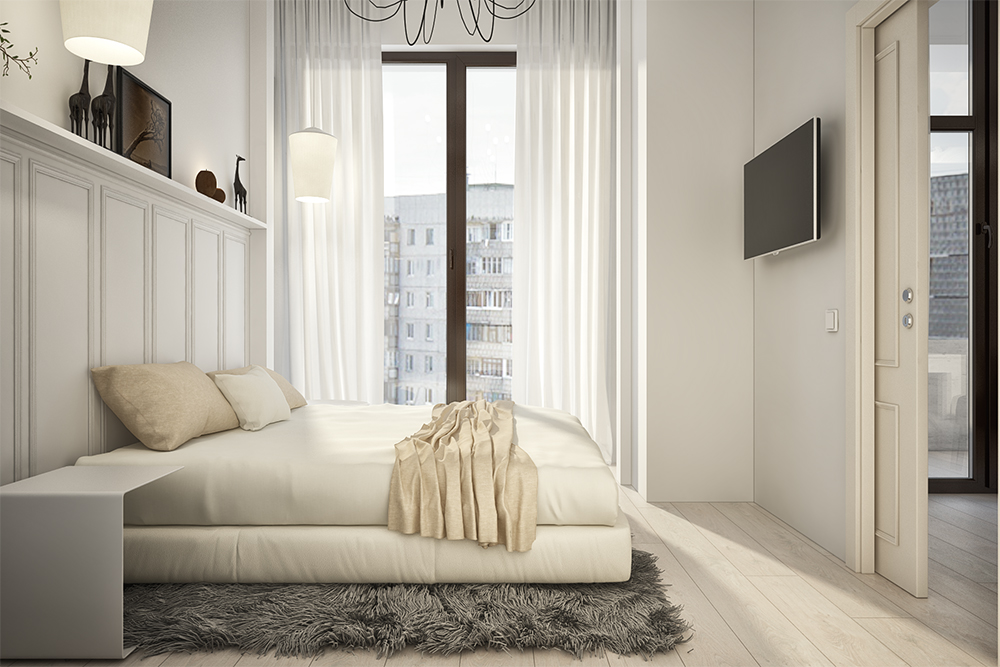 Bathroom The bathroom is also decorated in aWhite, but it is heterogeneous: if the walls are just a white background, then the marble is added on the floor. The central objects in the interior of the bathroom are the curbstone under the sink, in the decoration of which a tree of different colors is combined, and a mirror that matches it. 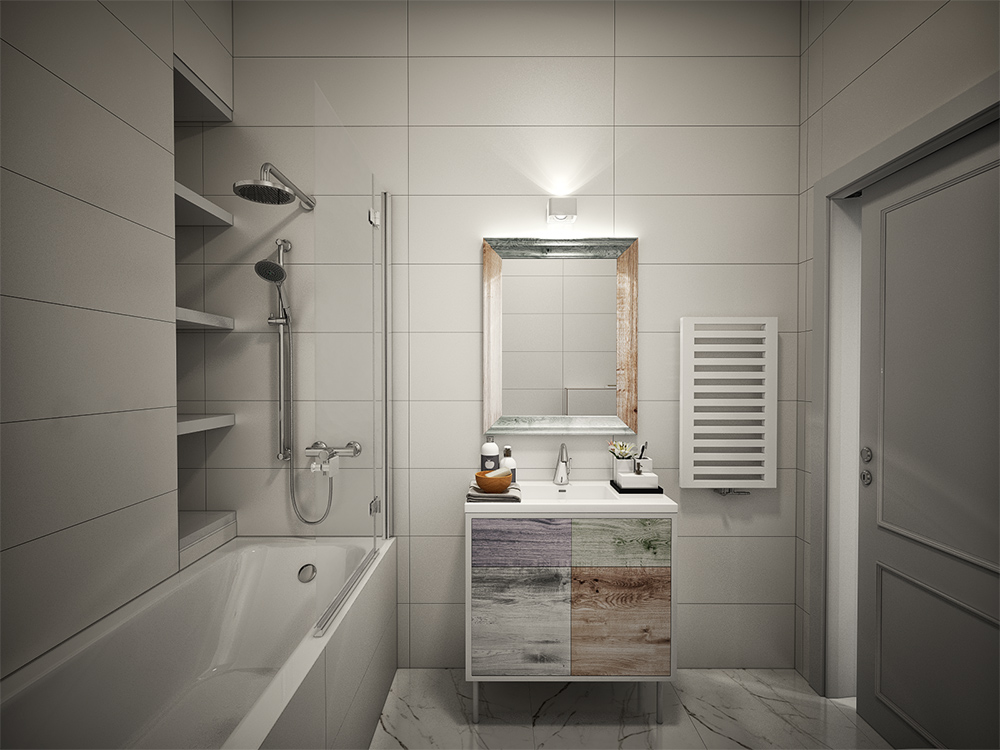 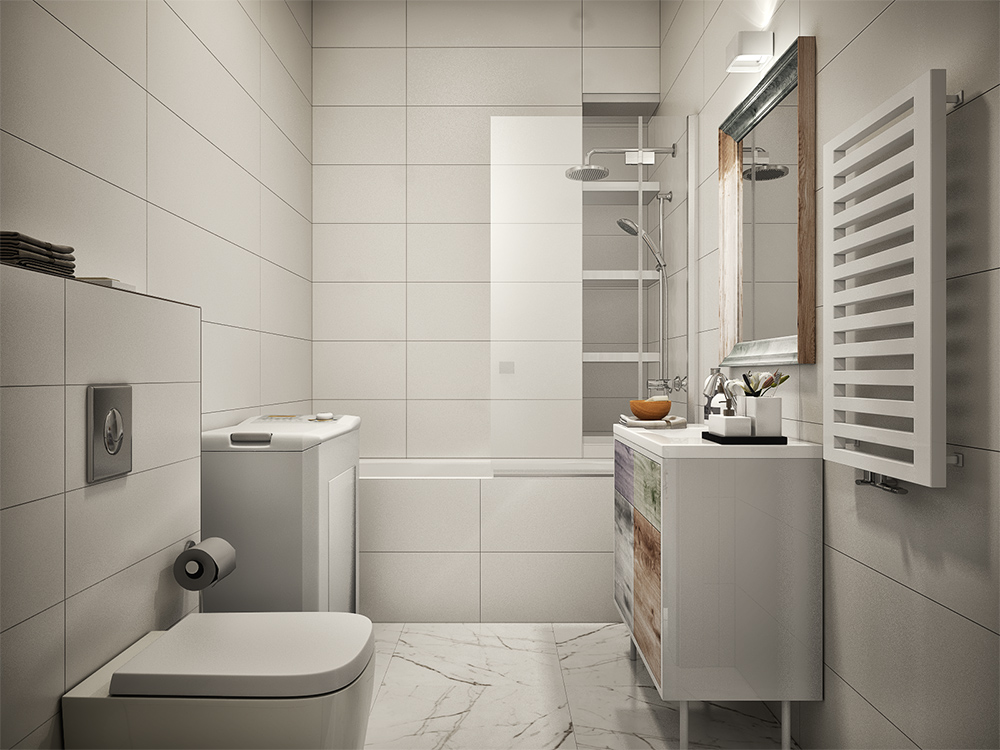 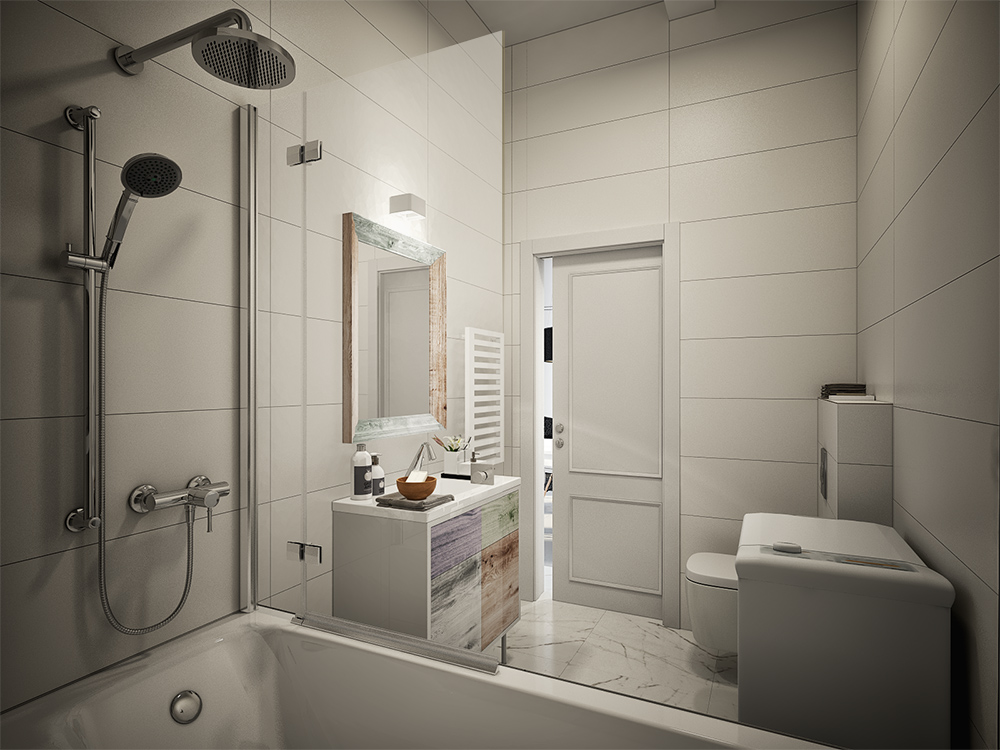 Stepan Bugaev, interior designer: - The project was very bright and pleasant, with precisely arranged accents. I managed to create a spacious and bright space in Scandinavian style, embodying simplicity and comfort. All the requirements of the customers were taken into account, and the owners of the apartment were satisfied with the result. 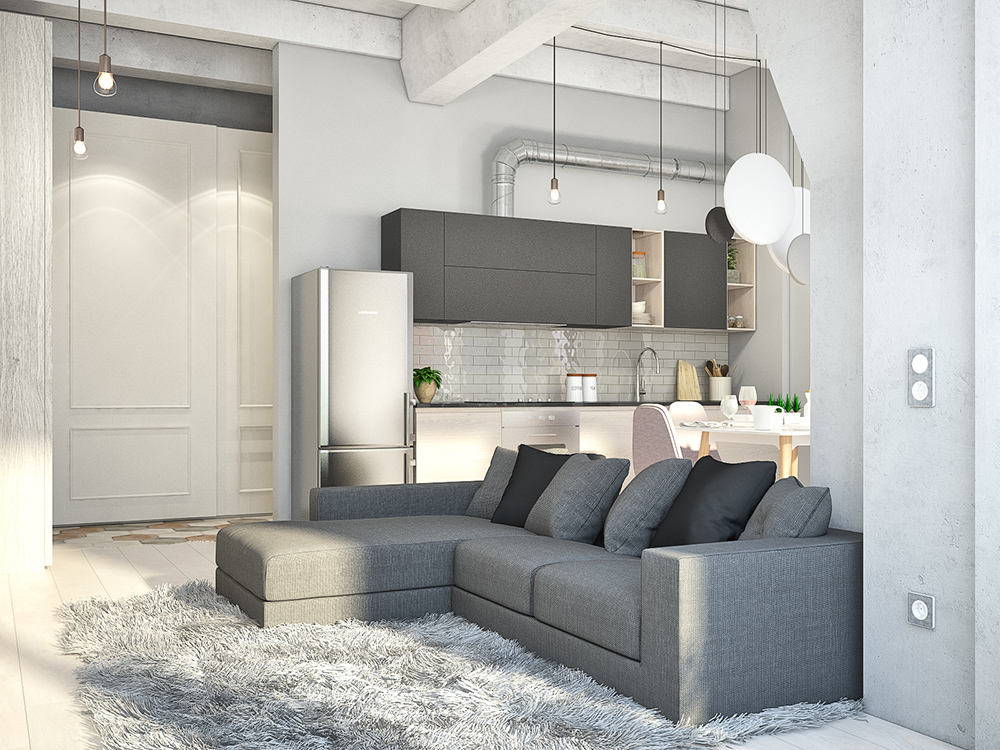 In this interior were used: Corridor:

Design of a two-room apartment: the interior is timeless

Two-room redevelopment: a bright design of a three-room apartment for a young family