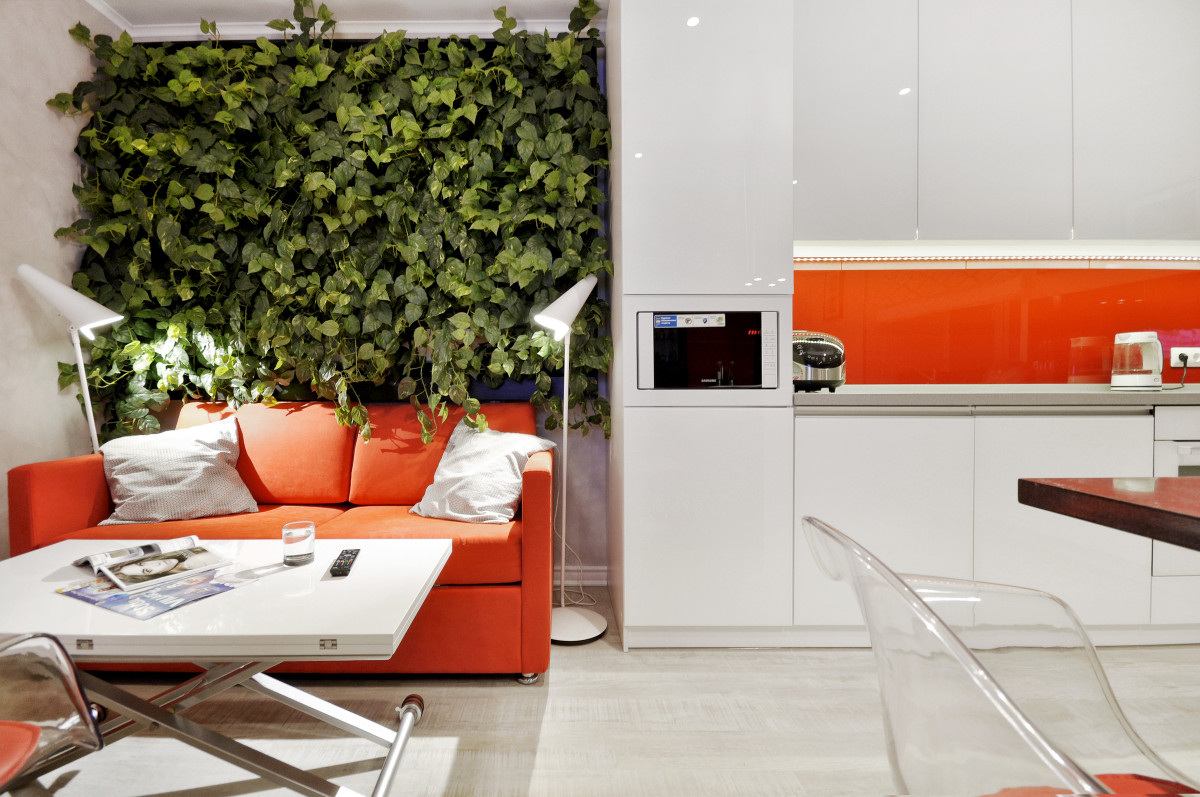 What if you dream of a red apartment? Is it worth it to risk and how to handle this color? The answers to these questions are known to the designer Artemy Saranin, who recently created the interior of an apartment for a lover of bold decisions and red color - one of the most controversial colors. It symbolizes danger and passion, sin and happiness and many other contrasting concepts. Psychologists are still arguing about the impact this color has on the psyche and the emotional state of a person, but converge in one: red is active and sometimes aggressive. What should a designer do if the customer wants a completely red apartment? In one of the latest projects, Artemy Saranin encountered precisely this requirement and today he shares his experience with us. Artemy Saranin, designer Born and raised in Perm. Since 5 years he was fond of interiors, painted and received art education, graduated from the Moscow Academy of Painting. Work experience - more than 15 years, for this time has realized more than 100 objects in various cities of Russia. To date, it specializes in the HoReCa segment (hotel and restaurant business: restaurants, cafes, clubs and other public places). Works in Allartsdesign studio as a designer. Finalist of the international PinWin competition. Allarts-design.com About customers More precisely - about customers. This apartment was created for a girl who works in the field of trade, and her teenage daughter. The initial task was to somehow formalize, since this room is traditionally considered a kind of "visiting card" for guests and therefore requires a special approach. However, having received the keys and looking at the other rooms, the designer made a decision: everything must be done. Expectations from the release were embodied completely: after 4.5 months of repair, a spacious, bright and rather bright red apartment appeared. Artemy Saranin, designer: - The client was very insistent on the red color in the whole apartment, so I tried to mute it as much as possible: I used red accents as the dominant color and diluted with light tones. The customer's daughter immediately said that she did not need a red color. The apartment is located in a new residential complex, commissioned without finishing. At the disposal of the designer received a standard layout, as in many other apartments. It was not possible to change something radically because of load-bearing walls, but this was not required. To implement the plan, we needed a spacious living room with a kitchen, a bedroom and a nursery, which were already planned by the builder. 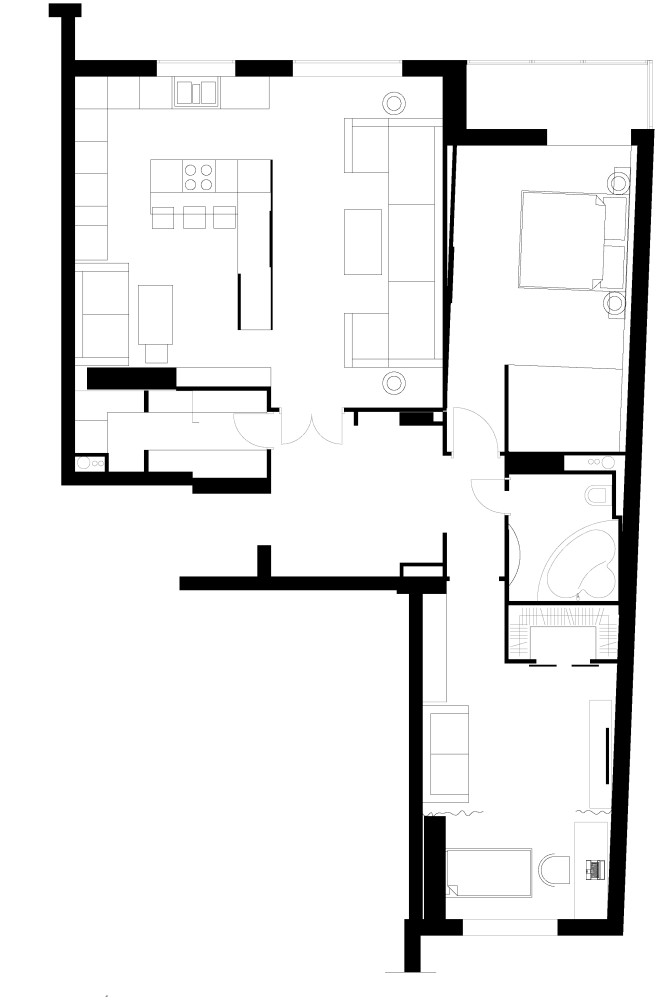 Living room + kitchen As the project began withLiving room, it was the central element of the entire interior. The main idea is a special design that divides the room into three parts. The uniqueness of the layout is that the fireplace is not on the wall, but "in the air", also located in the center, another part of the living room is occupied by a dining table with a cooking surface. Of the bright elements - a red sofa, a red kitchen apron and a wall with luscious greens. 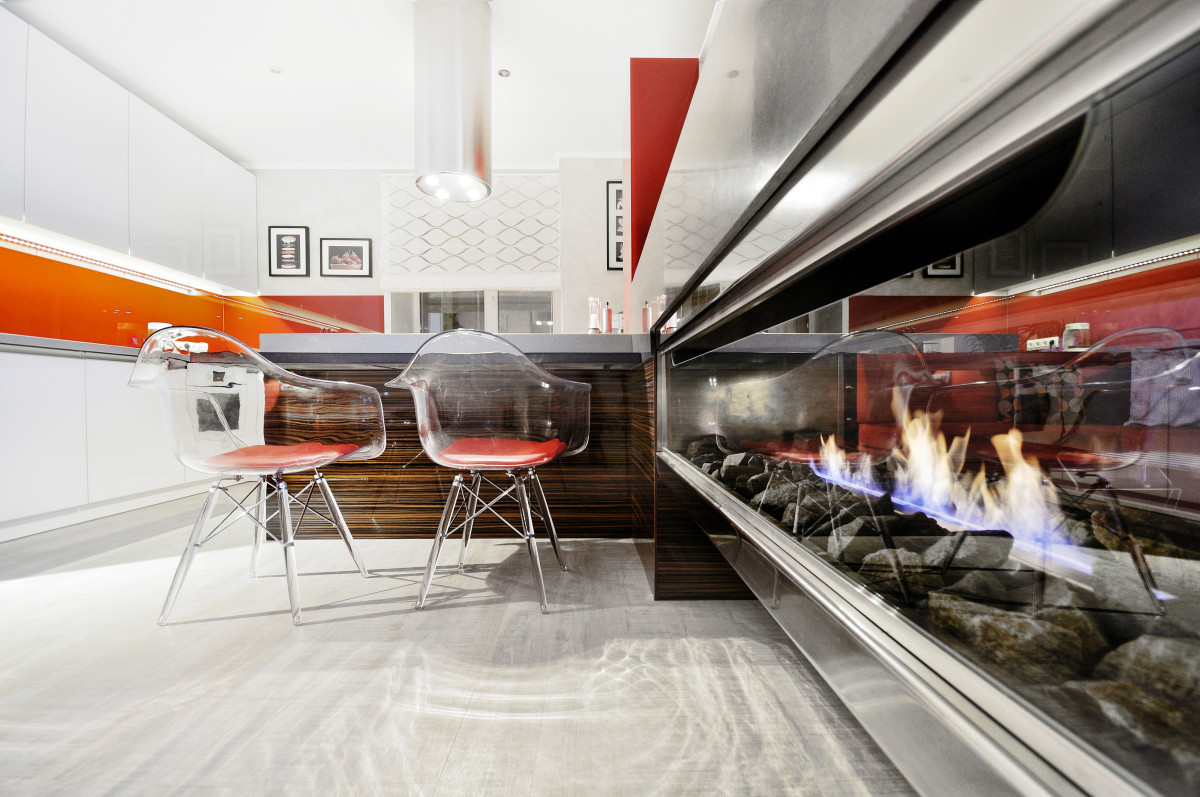 Main bedroom Quite a large areaPremises allowed to place in the bedroom a full dressing room. Above the head of the bed appeared voluminous letters on the textured wallpaper, highlighted from below. It turned out a gentle soft light, and for contrast, the designer chose a beautiful chandelier of feathers. 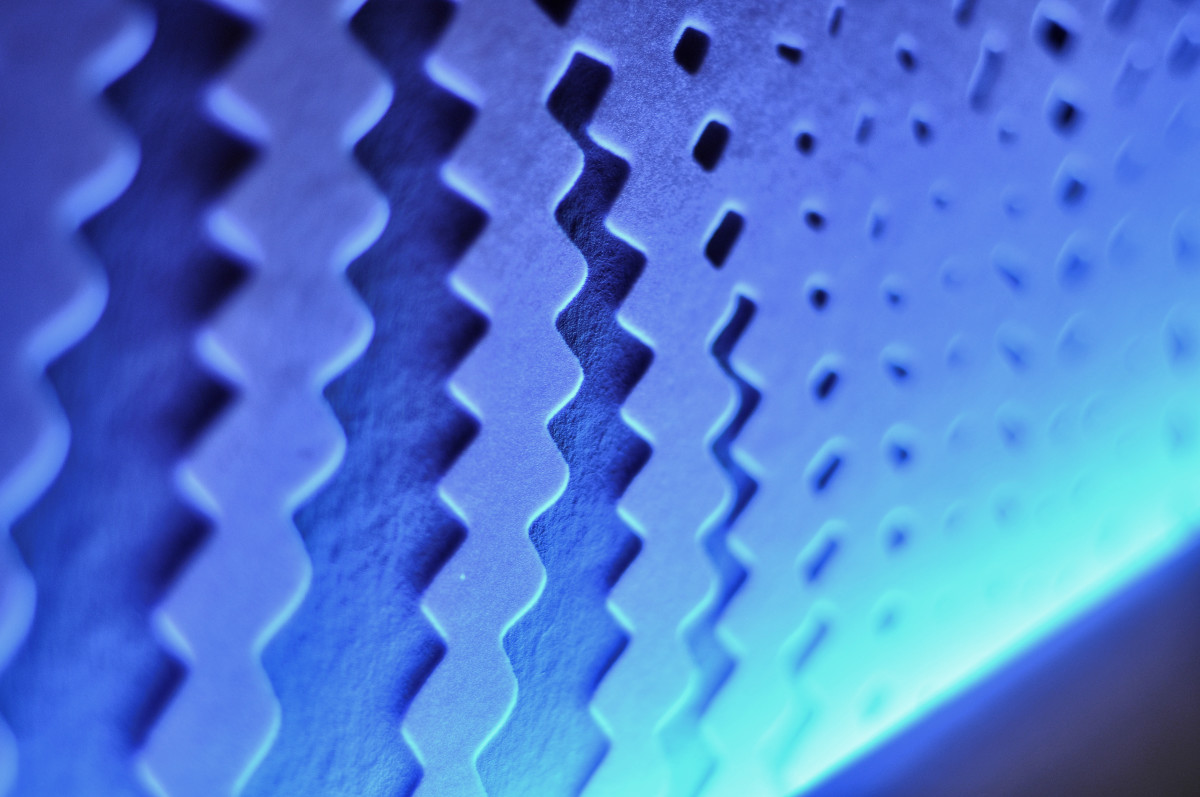 Children In the nursery - pretty standard setFor a teenager's room: a bed, a desk with a comfortable armchair, a wardrobe, a dressing table, a sofa. For the sleeping and working area was invented an interesting and very useful solution: they are on the podium, which can be quickly curtained and do not promptly order when unexpectedly friends come to visit. In the center of the room there is a sofa and a TV. As for the color range, here there are no hints of the customer's favorite red color: the palette is very calm, fresh, one wall is painted blue. The interior of the nursery turned out quite independent and unlike the other rooms. 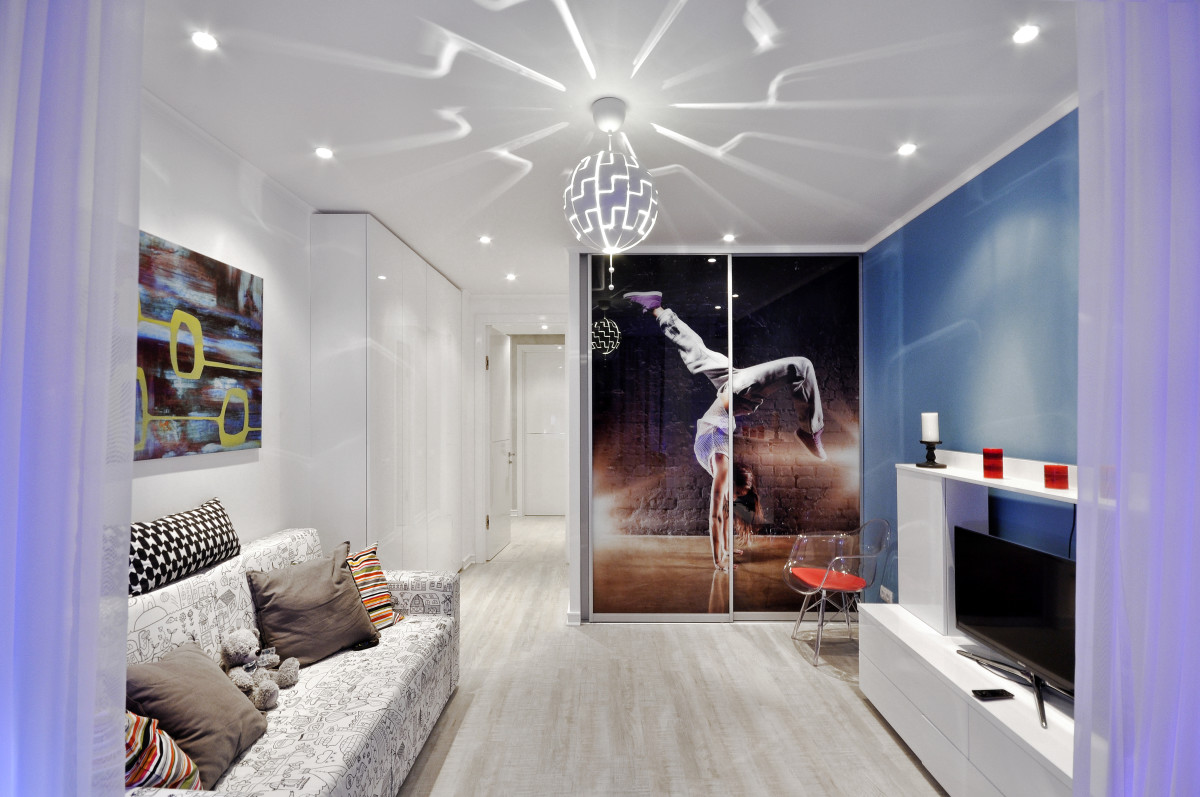 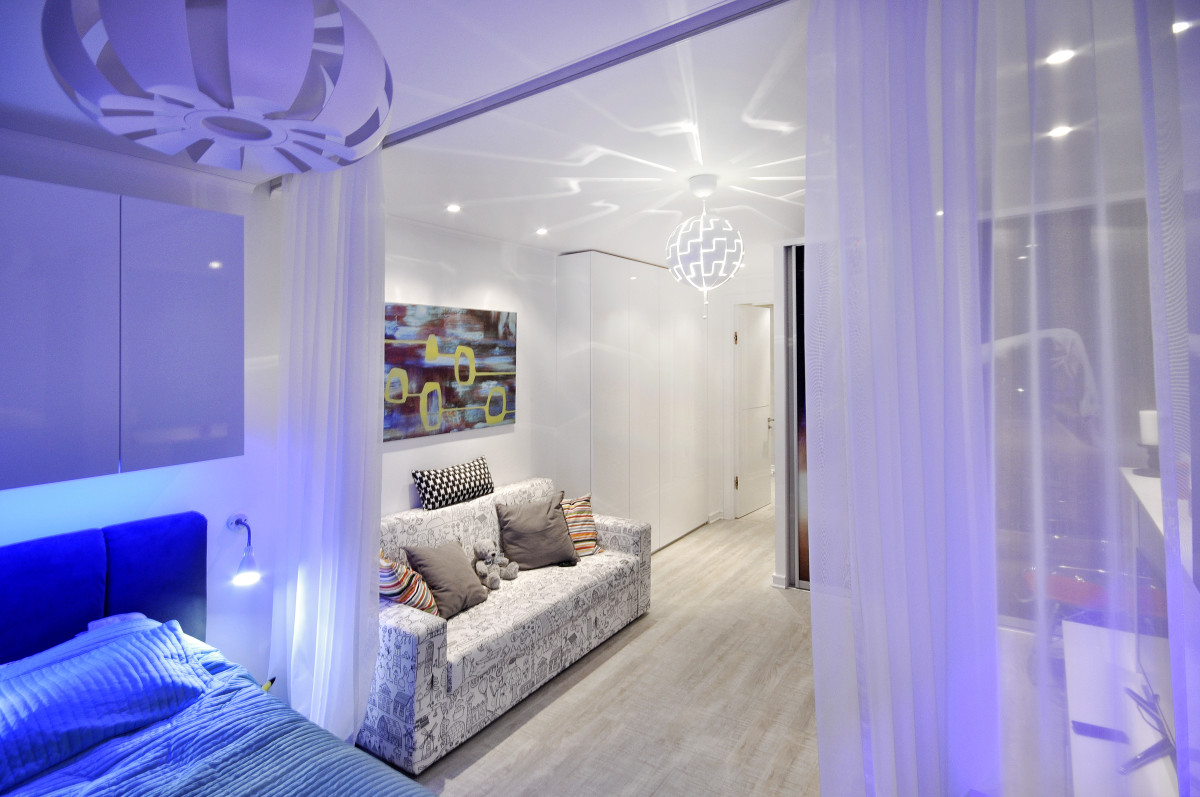 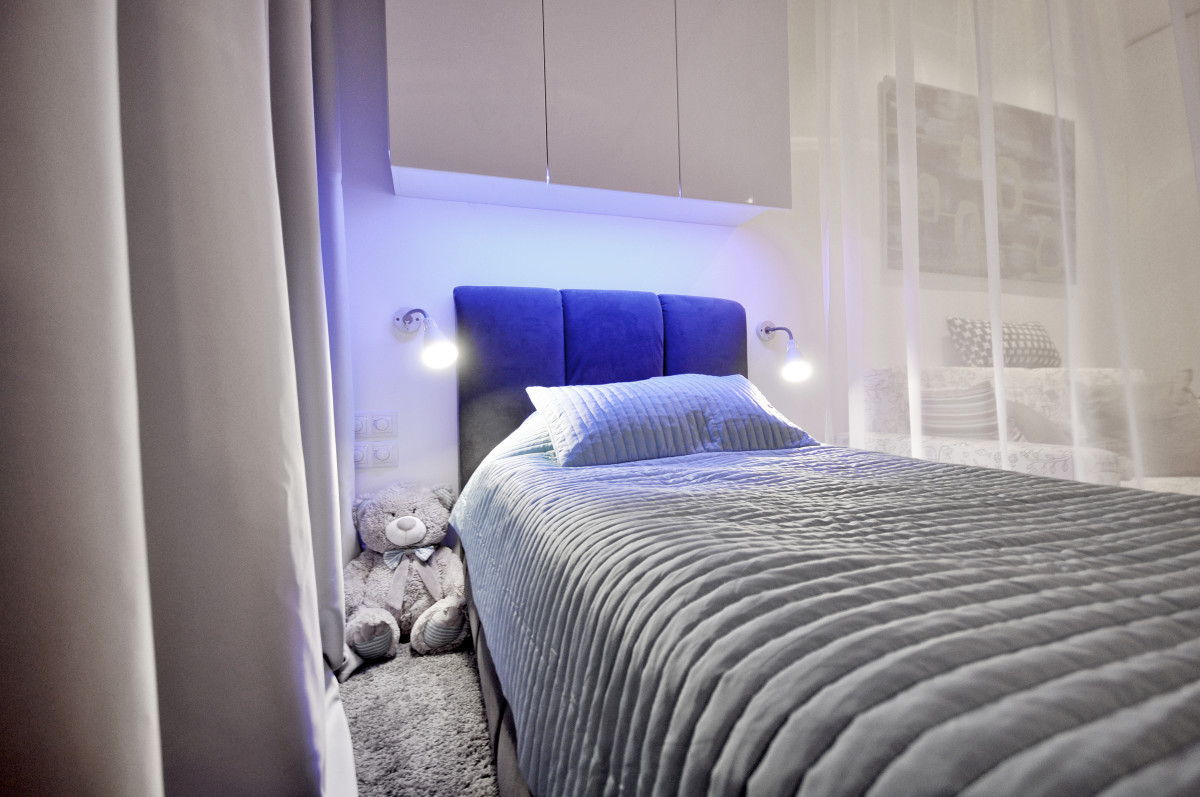 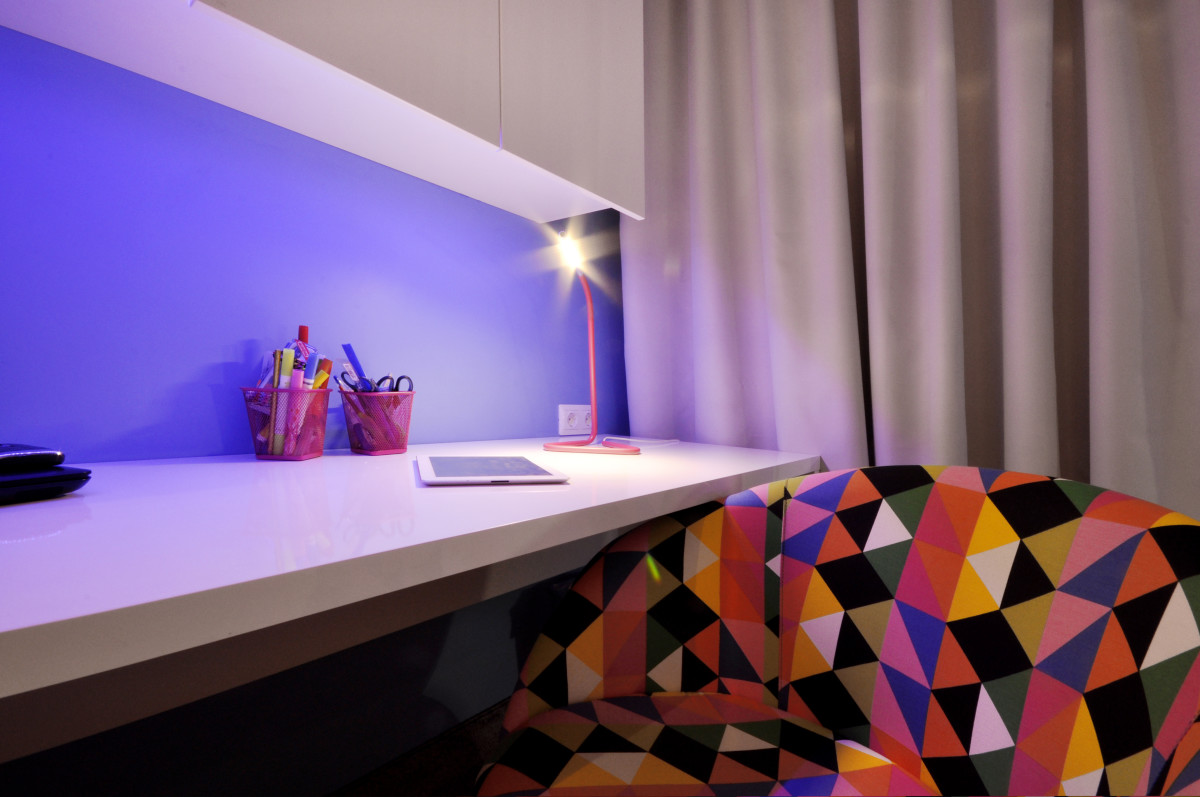 Bathroom In the bathroom we meet alreadyFamiliar set: saturated red color spots in contrast with white. The floor and walls are marbled and the red part of the wall is continued with a bright bath mat. 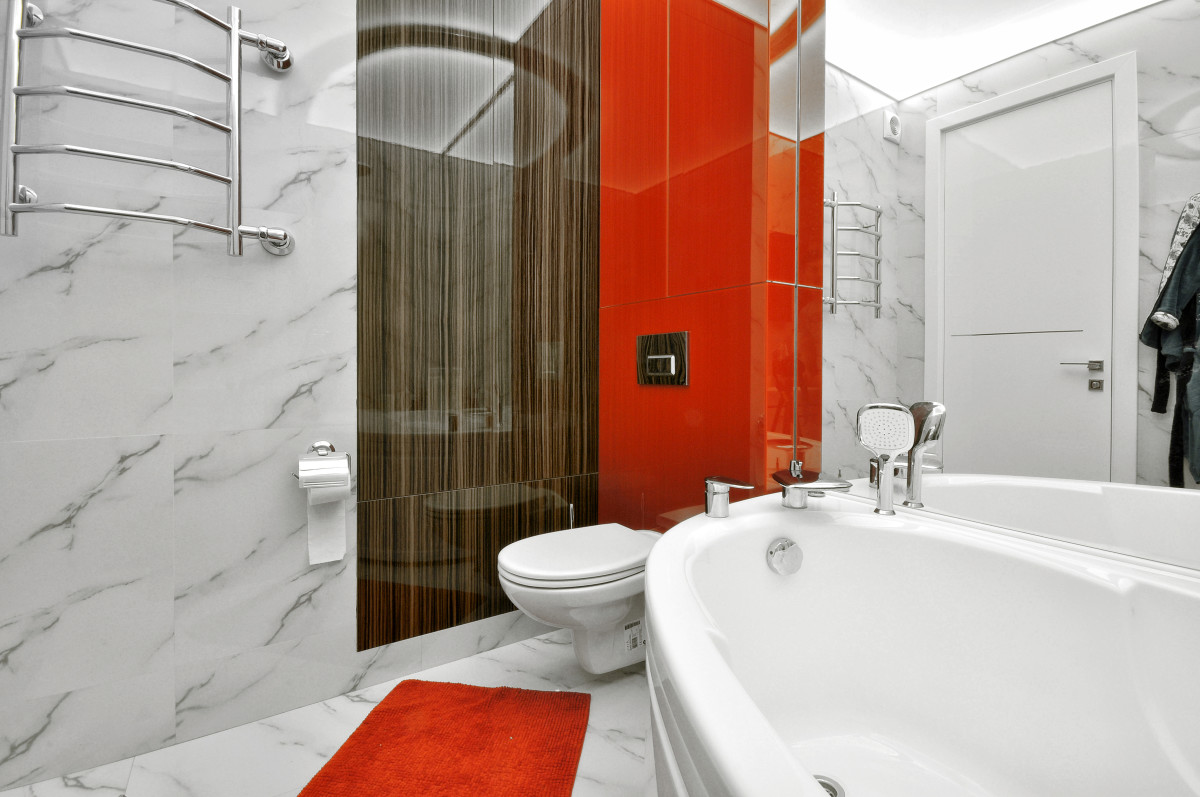 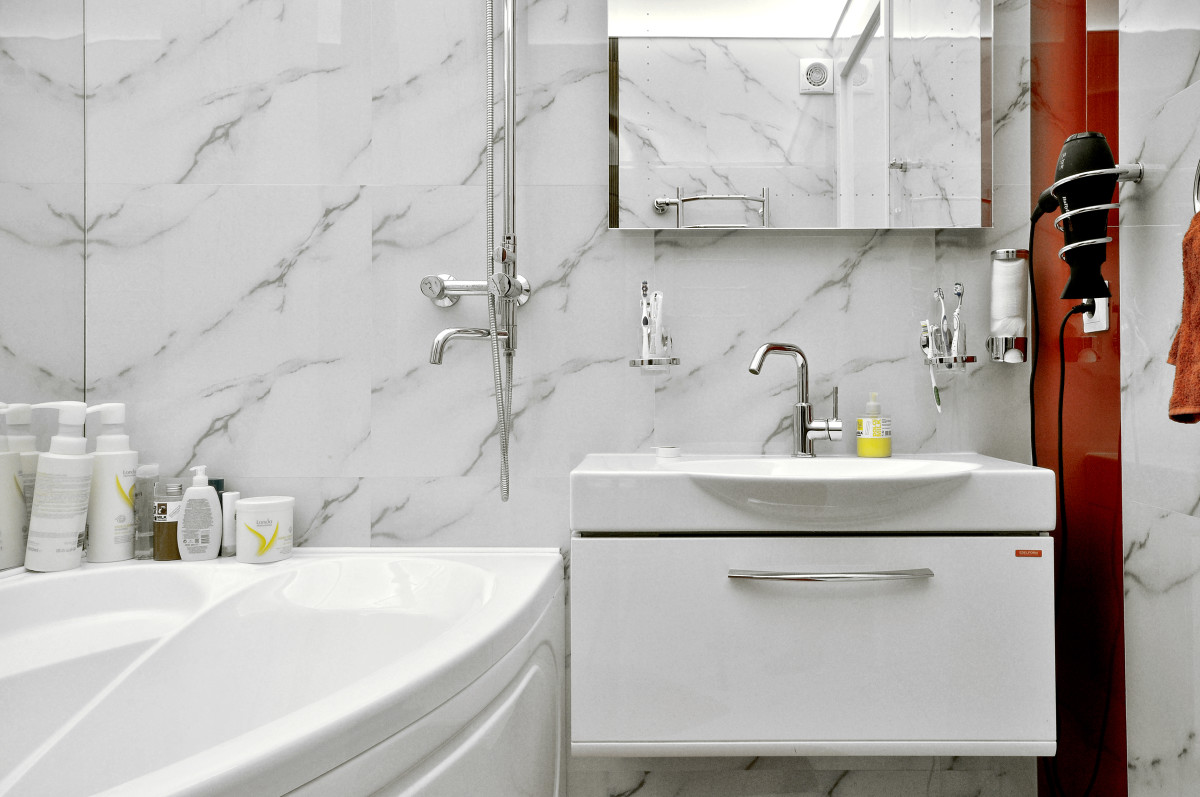 Color scheme The design of this apartment - justThe case when the color solution is almost completely dependent on the customer's tastes. Initially, the designer got the task of making a total red look: red clothes, red furniture, red walls. Now, looking at the implemented project, many say that red has turned out too much, for the customer this is not even enough. Artemy Saranin, designer: - I think I managed to find a compromise of the presence of one color. Add brown, white, black. The brightness of one color I replaced with high contrast. Materials Furniture was collected all over Russia: the housing was manufactured in Perm, the fireplace was originally supposed to be purchased, but because of the crisis, this idea had to be abandoned. In order not to lose the concept, the designer decided to re-design everything himself and make a fireplace in Perm: weld the frame, calculate heat dissipation, heat protection, ventilation, bio-burner, glazing, access to fuel supply and other details. 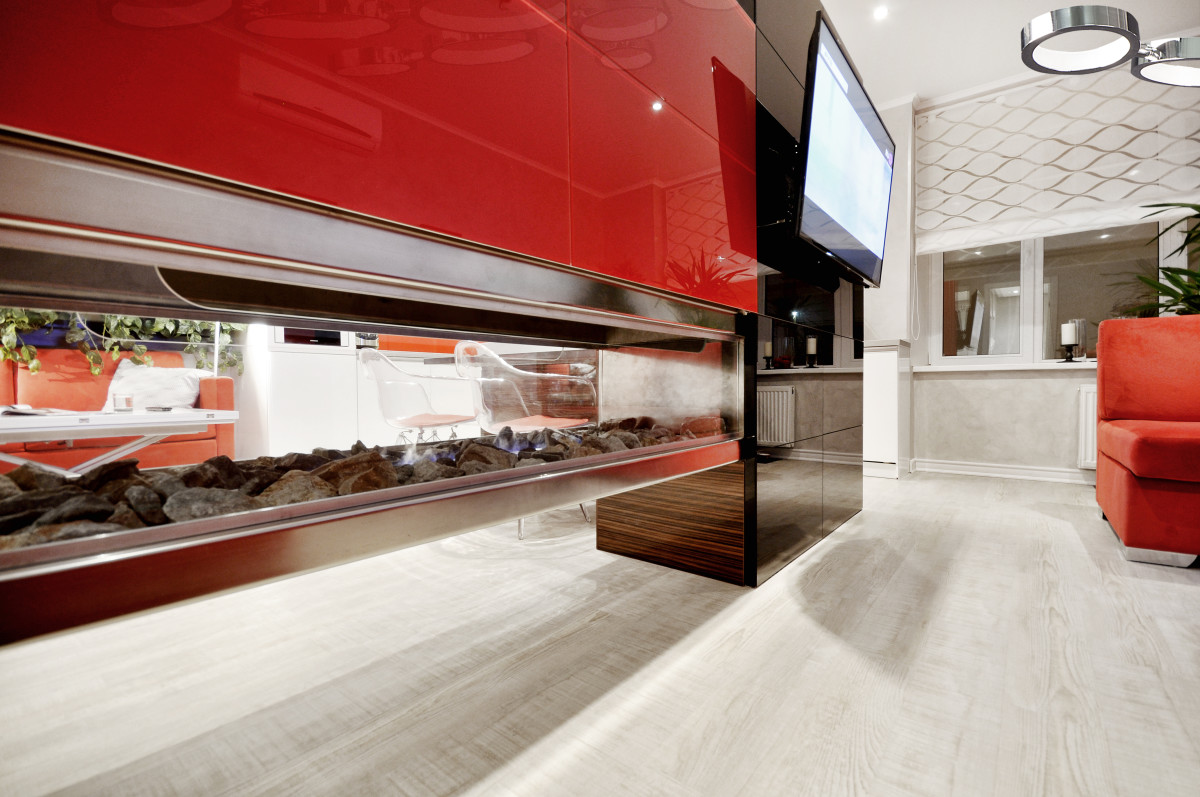 For the floor, a vinyl coating was chosen. In this project, a perimeter band was used with a double offset of the bars. The walls of the living room and corridor are made in decorative painting with semi-cover materials. In the bedroom - a voluminous wallpaper. Ceilings - tension, white and matte, made of GKL with painting. 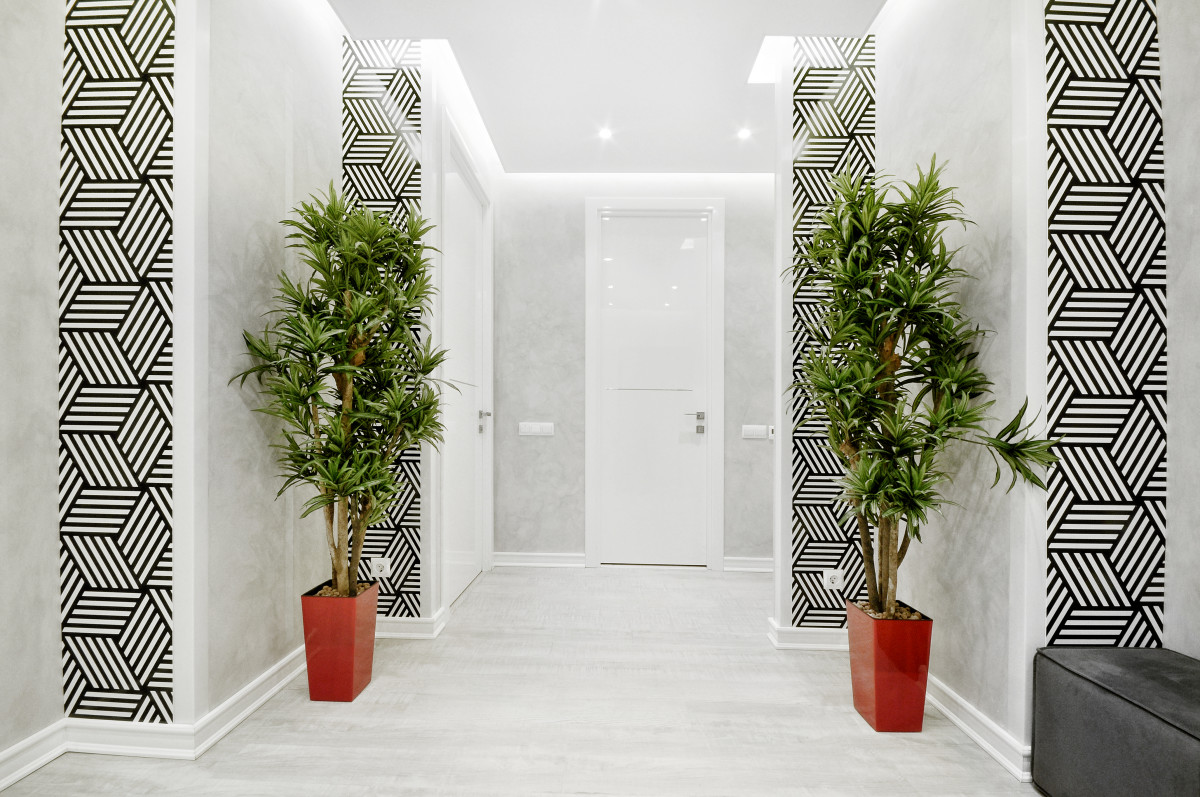 Interior, which the editorial board recognized as a sample loft - etk-fashion.com

The editorial board talked with the founder of the Missoni brand Rosita Missoni about the new collection, trends and ornaments - etk-fashion.com

With a taste of country: a house made of lumber in Perm