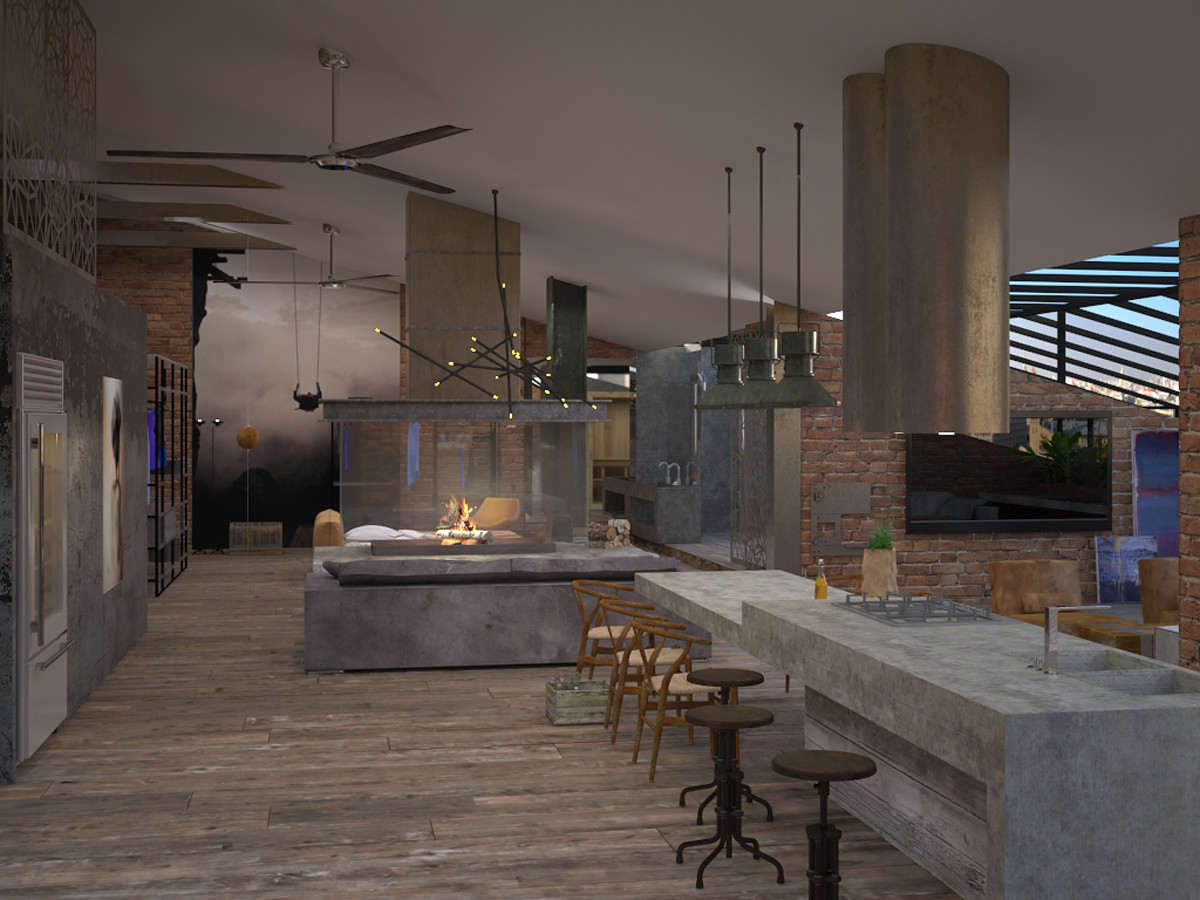 Is it possible to fit a modern loft in an old housewith a rich history and already established facade? How to find harmony between inner and outer? What you need to know, furnishing the attic with an open terrace? We are looking for answers to these questions using the example of a modern apartment project under the roof of Irina Buldina. Today the loft is at its peak of popularity. His target audience is becoming wider: the student and the banker want to decorate their homes in this style. A new project by designer Irina Buldina is an example of a surprisingly organic combination of fashionable style with timeless comfort and architecture of a historic building. About how he was born, what to do with the four open terraces and where in this ordinary Moscow attic real oases came from, read in this article. Irina Buldina, designer Graduate of the International School of Design, 15 years of work experience, including 3 years as a full-time designer in the Basic Element group. In 2008, founded the design studio Irina Buldina. Works in the premium segment, deals with private projects and offices. Professional credo: “Create memorable, ergonomically aligned spaces in which you want to LIVE. It is pleasant to surprise the customer with his work - to expand the boundaries of his knowledge and taste. ” facebook.com/profile.php?id=100001758800736 This project does not have a specific customer - it was prepared for the competition from the developer. That is why the designer's imagination was not limited by any conditions, except for one thing - the output should be a loft-style interior. Among the additional wishes, only the absence of whitewashed walls and rusty pipes was mentioned. 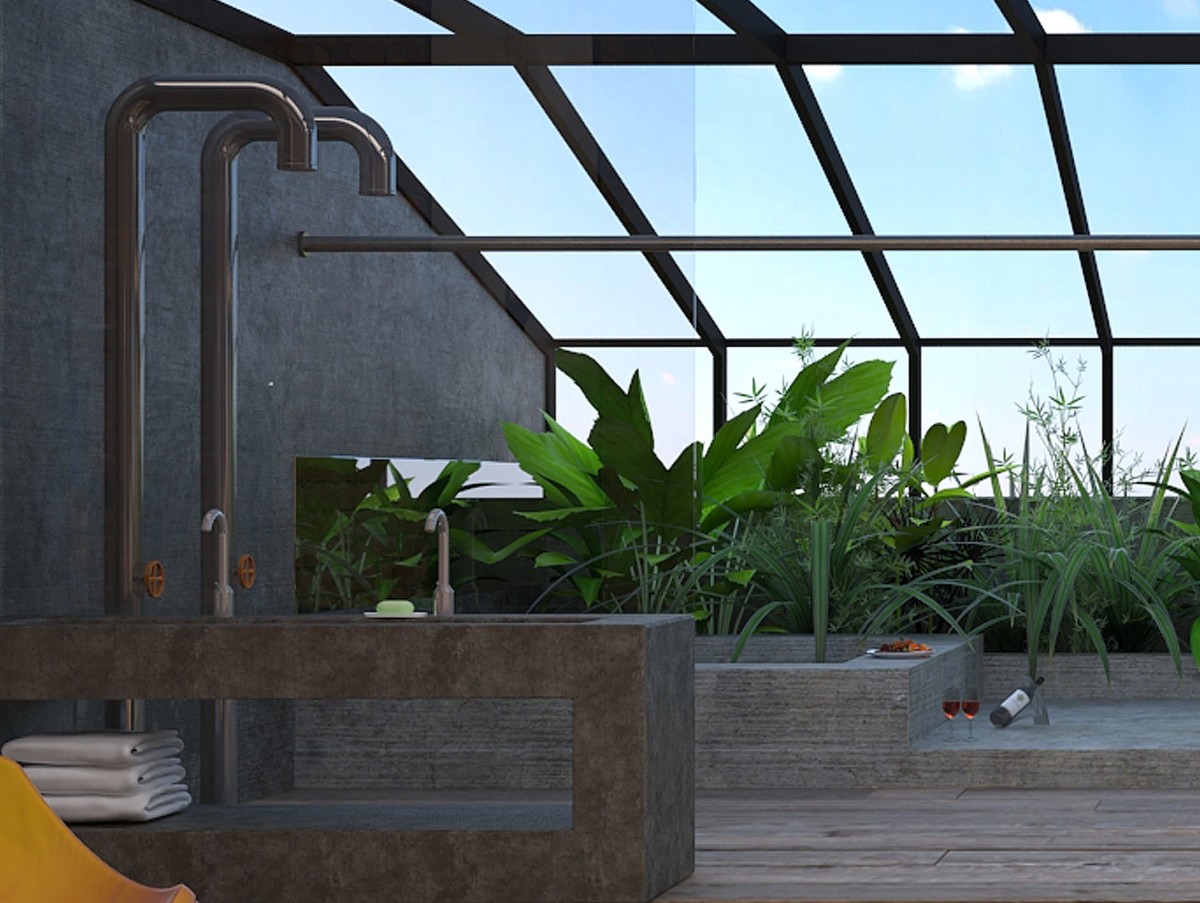 Irina Buldina, designer: - I decided that my customer is a modern man, leading an active lifestyle. In this space, a variety of scenarios and moods are thought out for him: from solitary meditations and romantic meetings to sports and parties with friends. However, it seems to me that a woman would settle in these walls with no less pleasure. The place of potential interior was an old house in the very center of Moscow - on the Boulevard Ring. This is a real monument of architecture, which was taken for restoration with a further superstructure of the floor. For work, Irina chose the apartment under the roof. In the project of the developer around the perimeter of the apartment on the ceiling line are open terraces. Considering that a real buyer would hardly need so many “streets” and it would be more rational to increase the usable area, it was decided to take three terraces into the residential warmed zone. The design of the glazing of the terraces should harmoniously fit into the already formed image of the building. 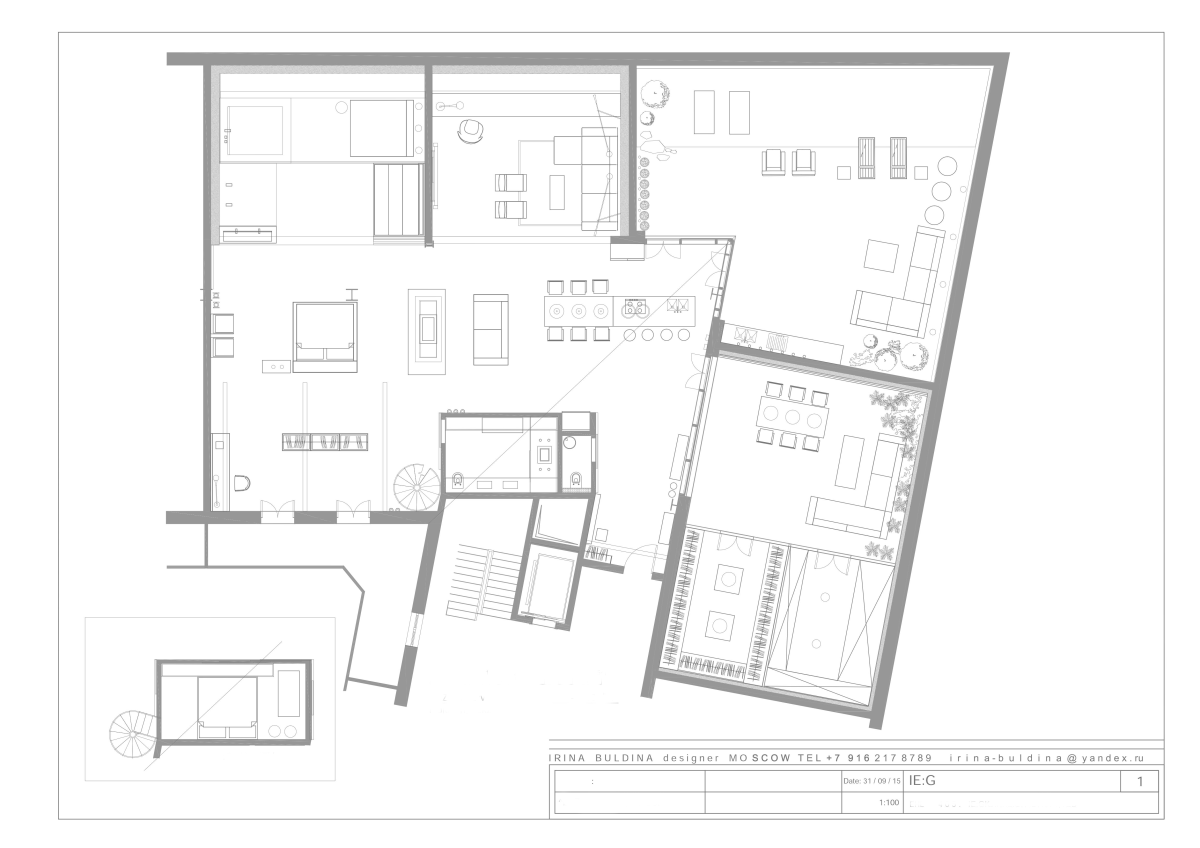 Irina Buldina, designer: - I did not dwell on the one hundred percent loft - because it is not in these walls by definition. We all know that a loft is initially an industrial building adapted for housing, so I was guided first of all by my feelings: I did what these walls “asked”. The style of the loft, I supported the layout of the apartment: the maximum preserved a single space without walls and partitions, leaving only the semantic zoning. Terraces deserve special attention. In my project, two of them - with an area of ​​44 m2 and 41 m2 - after being insulated and equipped with a triple-glazed window, became living rooms in the open air, forming a living room and spa area. Another terrace - an area of ​​87 m2 - is proposed to be used as a summer glazed. In addition, this terrace provides two insulated rooms of 18 m2 each, which can be used as walk-in closets or as rooms for household needs (for example, as a winter storage place for summer equipment from an open terrace). On a large corner open terrace - 106 m2 - a barbecue area, sofa groups, a summer kitchen, lawn, lounge chairs, fitness equipment, green areas and a rock garden are planned. Along the perimeter of the open terrace is equipped with drains for wastewater. On the terraces allocated for living space, so-called oasis zones have been developed - plantings of indoor plants. 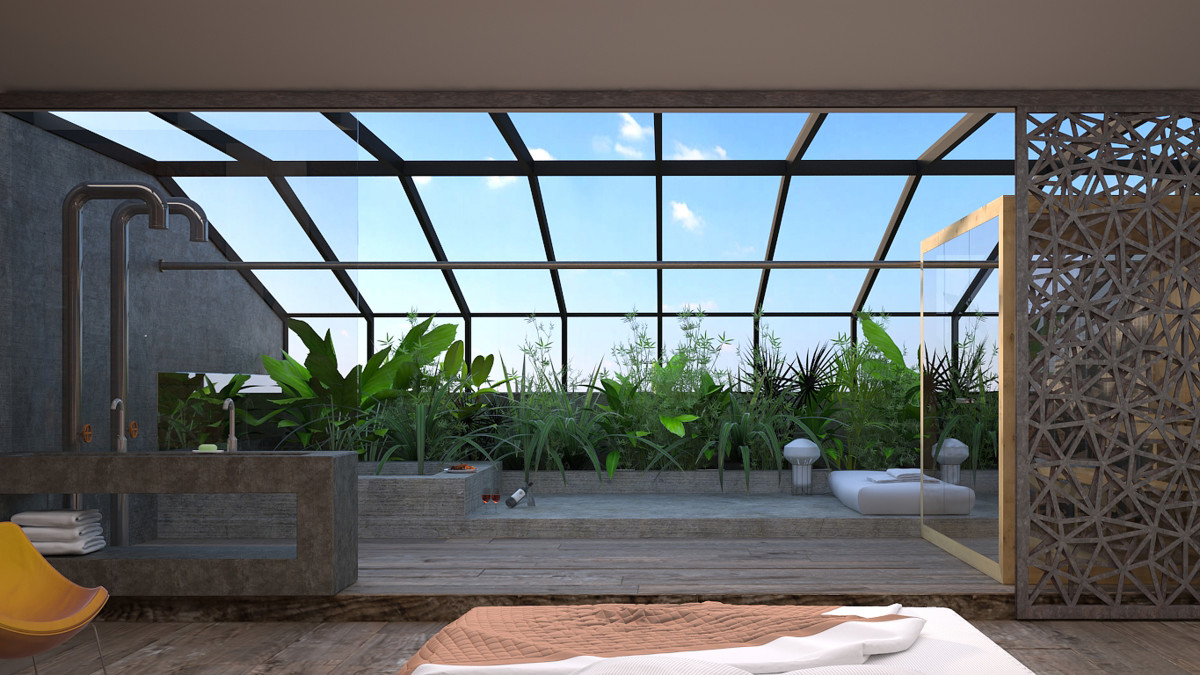 Irina Buldina, designer: - Solitude: open space, meditative photos, stars, open sky above your head. Chimney and spa areas. Romantic mood - the main purpose of this apartment. Here everything is saturated with romance! And if the soul asks for a holiday, all the charms of a secluded life can be divided in a pleasant company: both the interior space of the living room and the open terrace are always ready to receive guests. The apartment has all the conditions for receiving guests: a spacious living room, a sofa in front of a modern fireplace and, of course, plenty of space. And in the summer you can have parties for a rather large company on the open terrace. The fireplace in addition to the cozy color carries the function of the division of space: it separates the common area from the private one. You can contemplate the beauty of living fire from any point. But, of course, the best places will be in the immediate vicinity, on both sides of the fireplace: this is a sofa and. 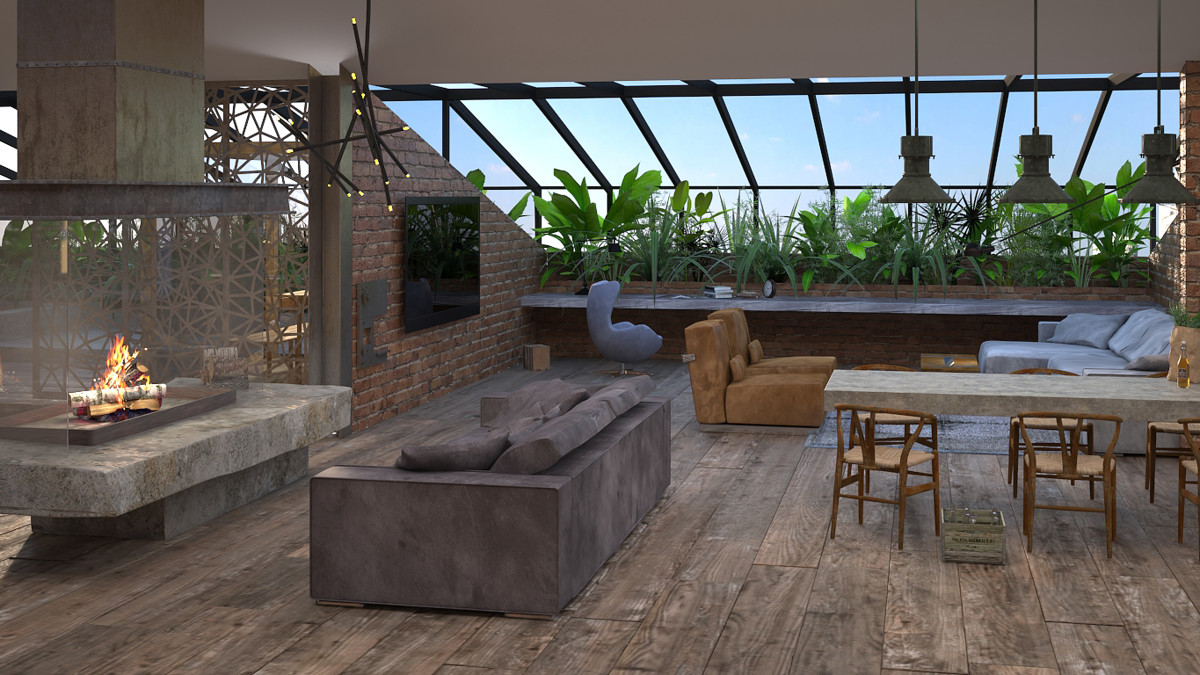 Another element of loft style: the dressing area is located behind the headboard and consists of separate frames of cabinets, which, moreover, serve as a screen from the windows to the courtyard. Between the dressing area and the headboard is an open space in which a small punching bag is located to maintain the host’s fitness shape. A picturesque view opens from the bed: an open bathroom with a rich oasis and a starry sky. Sliding partitions are used for zoning: according to their mood, they can separate the spa terrace area so that the sun rays do not wake up in the morning. Perforated partitions also perform the function of night curtains. They fill the space with intricate shadows and sunbeams. 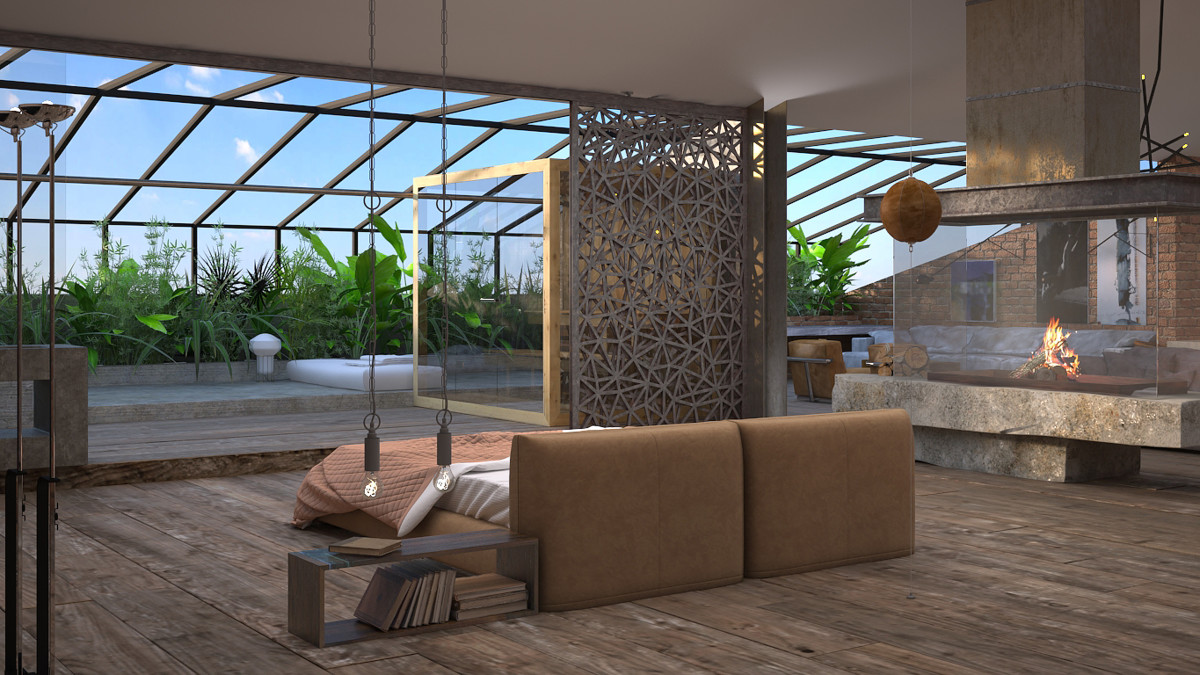 The spa terrace is a spacious sauna withpanoramic windows, and two colorful shower "pipes" support the urban theme. The large tub is made of concrete using modern technology. From it is made enclosing structure for plants. Behind the sauna there is a massive multifunctional mattress on the floor for relaxation after a sauna, massage or a normal day rest. The kitchen is also located in a single open space and is made in the form of an island, which smoothly passes into the massive tabletop of the dining table without legs. The tabletop holds slab natural stone.

Irina Buldina, designer: - Although the loft implies a single large space, small secluded places in the apartment are also provided. So, along the highest wall there is a two-level space (two bathrooms), a small guest bathroom from the entrance hall and a second bathroom. On the mezzanine there is an extra secluded bedroom.

Life on the roof: an apartment in Manhattan with a huge terrace

Two-bedroom apartment in an elite house: 166 meters of silence - etk-fashion.com

Studio apartment in loft style, in which only one window - etk-fashion.com