In this article we will talk about the Parisianamber boutique, which our Russian designer was able to give a second life and even attract new customers. We love to talk about the work of Russian designers with residential properties. However, it is not often possible to share with you the history of cooperation of our compatriot with a European customer. Today - a pleasant exception: designer Tatiana Punans spoke about her amazing experience of designing an amber boutique in the most romantic of cities - Paris. Tatiana Punans, interior designer

Was born in Moscow, in the family of artists.

Member of the Union of Artists.

- The Monapasier Gallery in the Palais Royal area isA famous place, the national treasure of France, a square of boutiques of very different content, often useless, but of cultural and historical significance. I recently finished as an interior designer thereA small object - a boutique of amber with a very interesting technical specification: the image of a luxurious palace France in a few theatrical exalted interpretation, the maximum capacity and the most spectacular demonstration possibilities - 15.5 square meters. M, the convenience of fitting and the place for the seller. 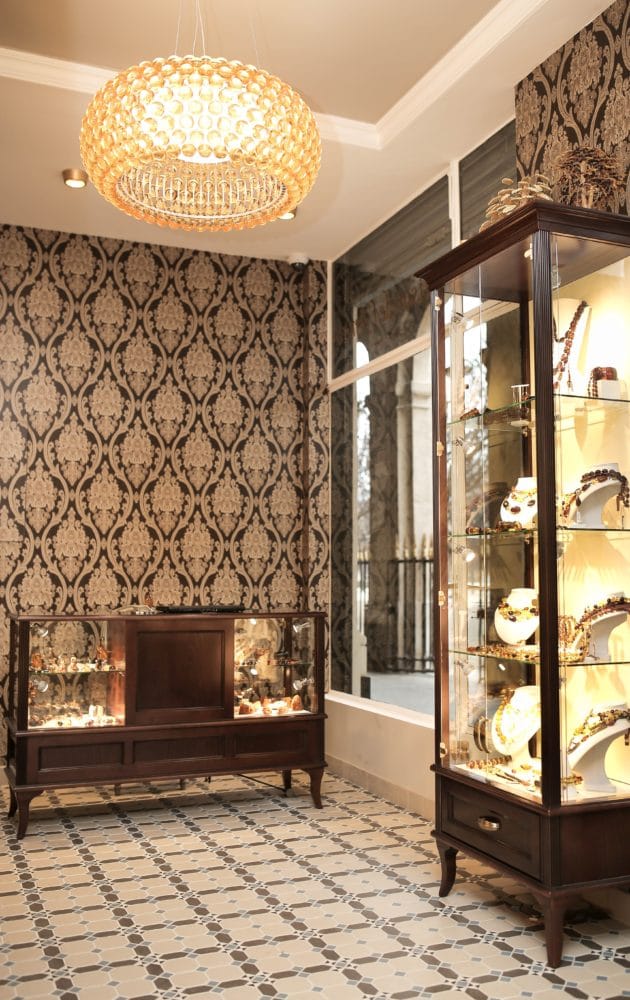 It was clear that you need to make such a sweetCandy, strengthening the vigorous luxury of the amber collection, attracting curious already from a distance with a glowing warm light showcase. A musical box constantly appeared in my head, upholstered in dark velvet with gilding and shining with embroidered pearls. 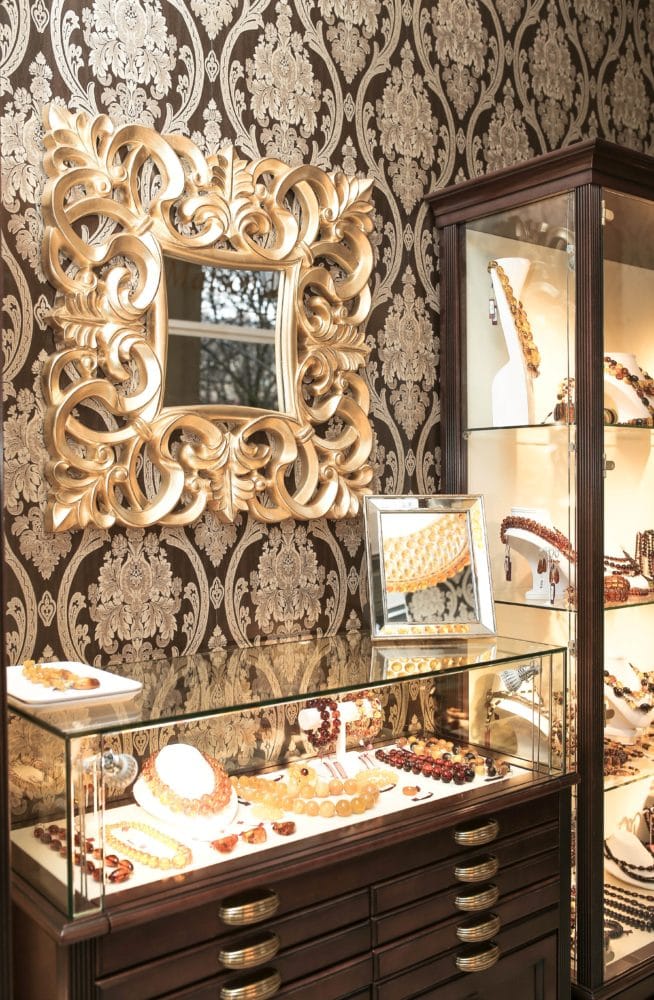 I must say that the room was not new. There already had a store of the same name, absolutely faceless and not very convenient in terms of functionality. The task was interesting, but the problems and difficulties did not wait. The first thing I wanted was to save the unfortunate, eternally freezing sellers. In a humid Paris climate, there is little chance of warmth if there is no heating in the room. The warm floor is the first thing that came to my mind. 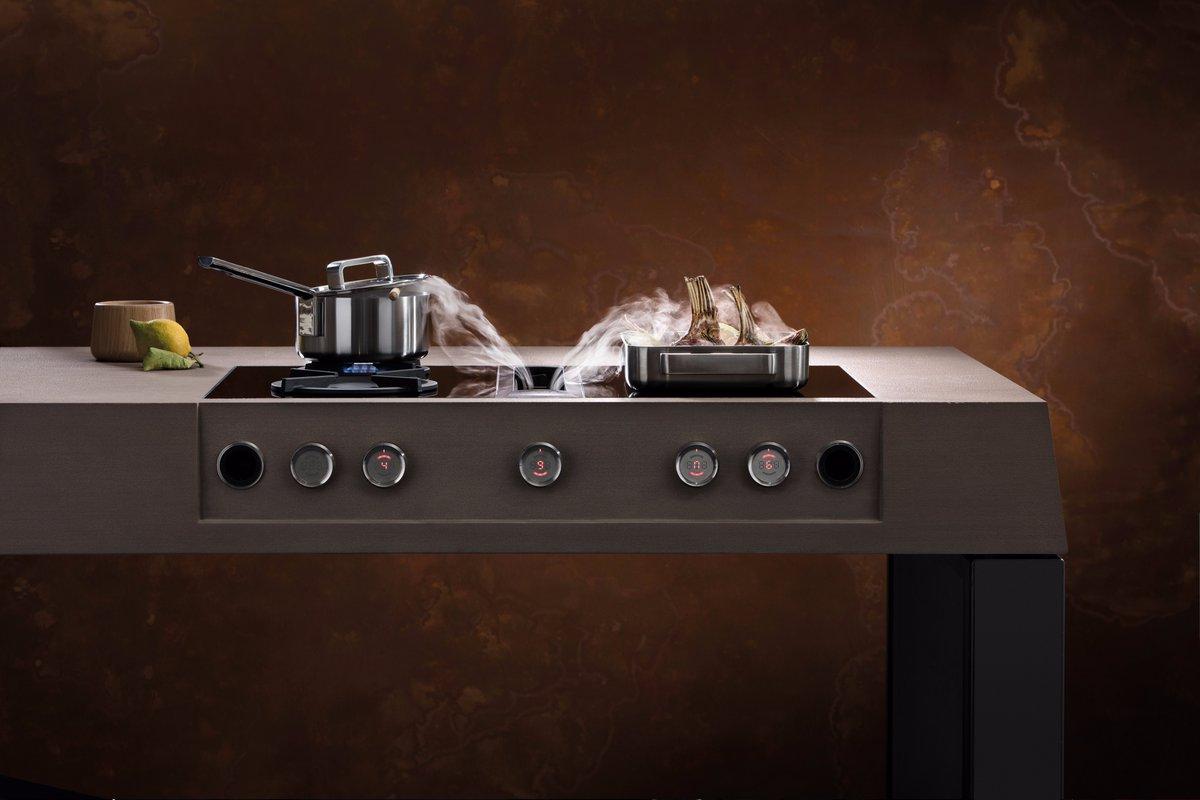 Once the warm floor, then the tile, historically relatedWith sidewalk outside the window. I immediately remembered about the Portuguese factory Top Cer, whose products I use very actively in Moscow. It is interesting that the gaze immediately fell on the Paris collection. Then began the mad search for the seller. And it was unthinkable and incomprehensible! The market in France is small and conservative, "foreigners" on it a little. Find factories famous in Moscow is very difficult. I found the tile in some provincial suburban warehouse. 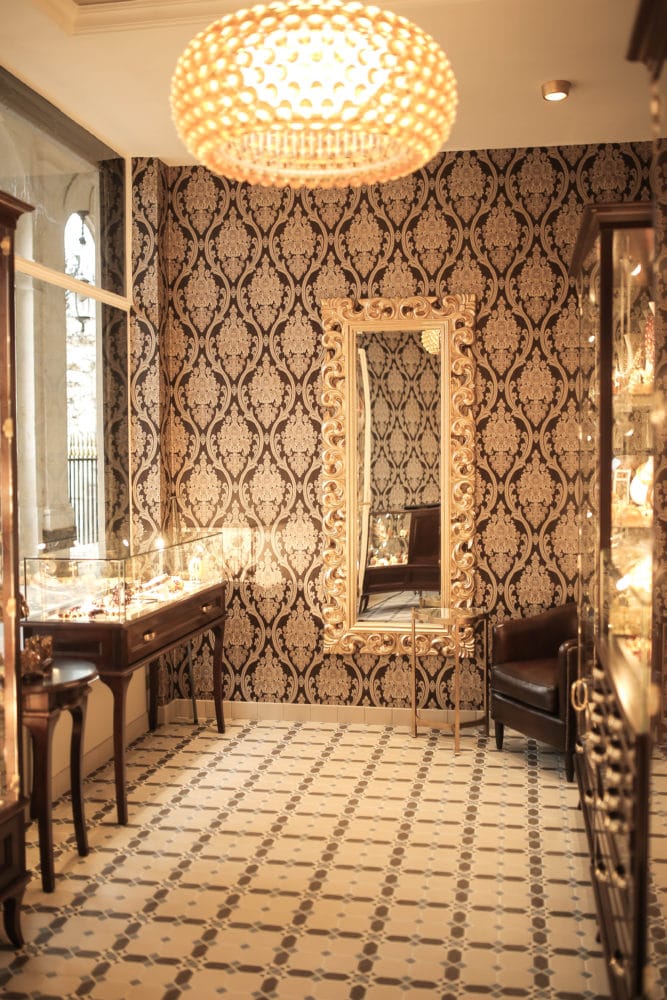 Wallpapers of the German factory Paravox came without problems,In Paris they were not there either. Furniture, with professional requirements, elements and details, was ordered according to the drawings in Lithuania, and it should be noted that it is of excellent quality. The style of furniture was collected from the main classical quotations. 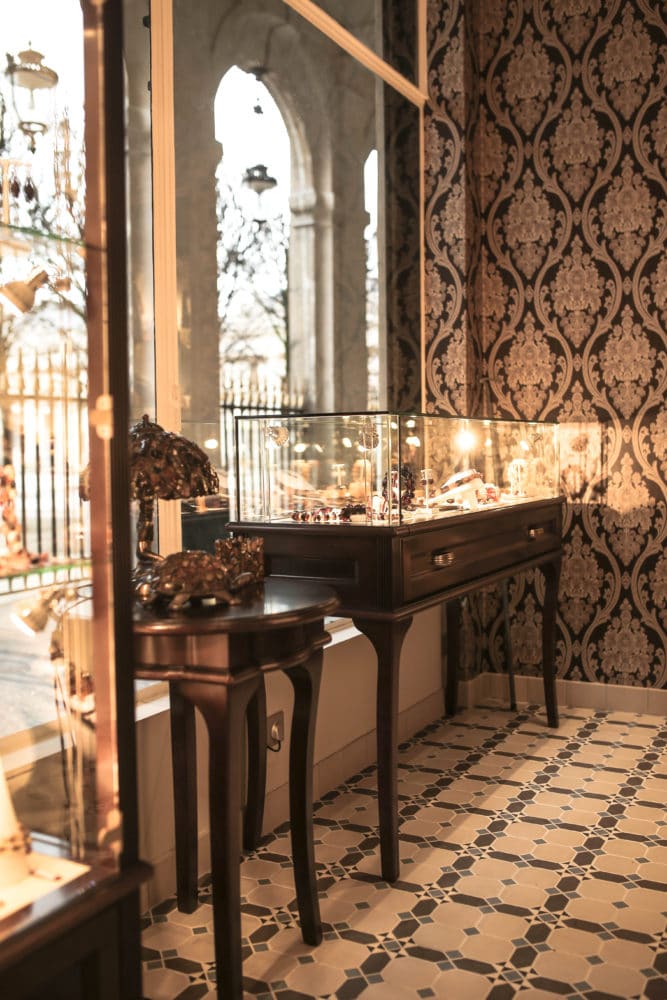 The central large theater chandelier isFoscarini Caboche amber color. I have long loved this collection, it behaves impeccably in any interior, shines well and is very pleased with the look - that yellow, that is transparent. Color, transparency and shape are very close to associations with amber. The luminaire is very far away on the approach, and in the evening it is a kind of beacon, a magnet that attracts even casual passers-by.

Next was a leather armchair for those waiting for theirI'll give the satellites. It was immediately bought in an unnamed vintage salon near Bastia. The conceived mirrors could not be found in the salons of Paris, but the flea market came to the rescue. The most ridiculous story is connected with coffeeA table that was supposed to stand near a mirror and a chair. This was immediately found in the bank of my memories, this is the American factory Jonathan Charles, and the table is called Eglomise. So, its, well it's small, had to carry from Moscow by plane, since it was the easiest. Despite all the adventures, it was very niceWork under the shadow of the Parisian plane trees, next to the lights of the Rue de Rivoli, work with such understanding intelligent customers! This can only dream of any designer. The work lasted slightly more than three months, everyone was satisfied and even said that the buyers became much more!