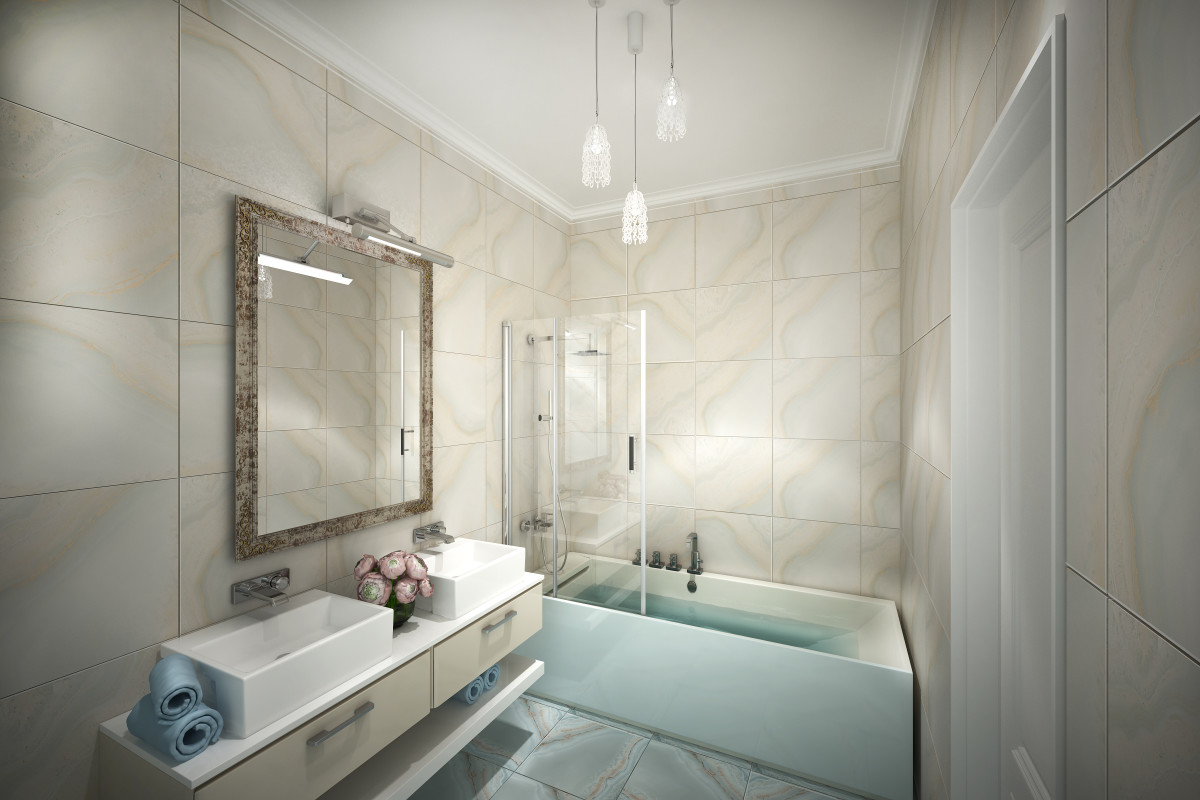 Can the classic interior be bright, lightand relevant? How to organically combine elegant shapes and bold colors? We study the question on the example of the interior of a Moscow three-room apartment from the designer Anastasia Muravyova We are used to think that the classics are something ceremonial, prim, obliging. The abundance of gold and brocade, massive furniture, heavy curtains from floor to ceiling ... But is it always so? Of course not. To get rid of these stereotypes, it is enough to look at the project of this three-room apartment in Moscow. And how this classic interior was born, full of bright colors, air and Parisian spirit, says the designer Anastasia Muravyova, with the works of which we have already acquainted you. Anastasia Muravyova, Designer-Decorator Graduate of the Faculty of Economics, Moscow State University. Lomonosov and the Higher School of Environmental Design MARHI. She received a MBA from Bristol University. Member of the Creative Union of Artists of Russia. Engaged primarily in private interiors and painting, also has developments in the field of public design. He is fond of modern art and photography. In the work, special attention is paid to details and unique objects. Creative mission is to create a stylish, comfortable and harmonious space for life that fully meets the tastes and budget of the customer. aminteriordesign.ru Wishes and layout The apartment is in a new house and has a free lay-out. It is calculated for the residence of a family of three people: spouses and their son, a schoolboy. The kitchen and living room areas are combined, there is a bedroom and. Thanks to the arrangement of windows and load-bearing walls, the fourth room in the plan also appeared, very small in area, but with two windows. It was necessary to use it, and Anastasia offered to take her to the study or dressing room. Customers stopped at the second option, and as a result, with the main bedroom turned out a kind of boudoir for the hostess. Anastasia Muravyova, designer-decorator: - Customers turned to me even before the house was put into operation. They wanted to get an interior concept in advance, think it over without haste, and then start repairing as soon as possible. Therefore, I began work on the project with planning and visualization, based on documents received from the builder, and more detailed working drawings did already the next stage, as the exact measurements of the object were possible later. 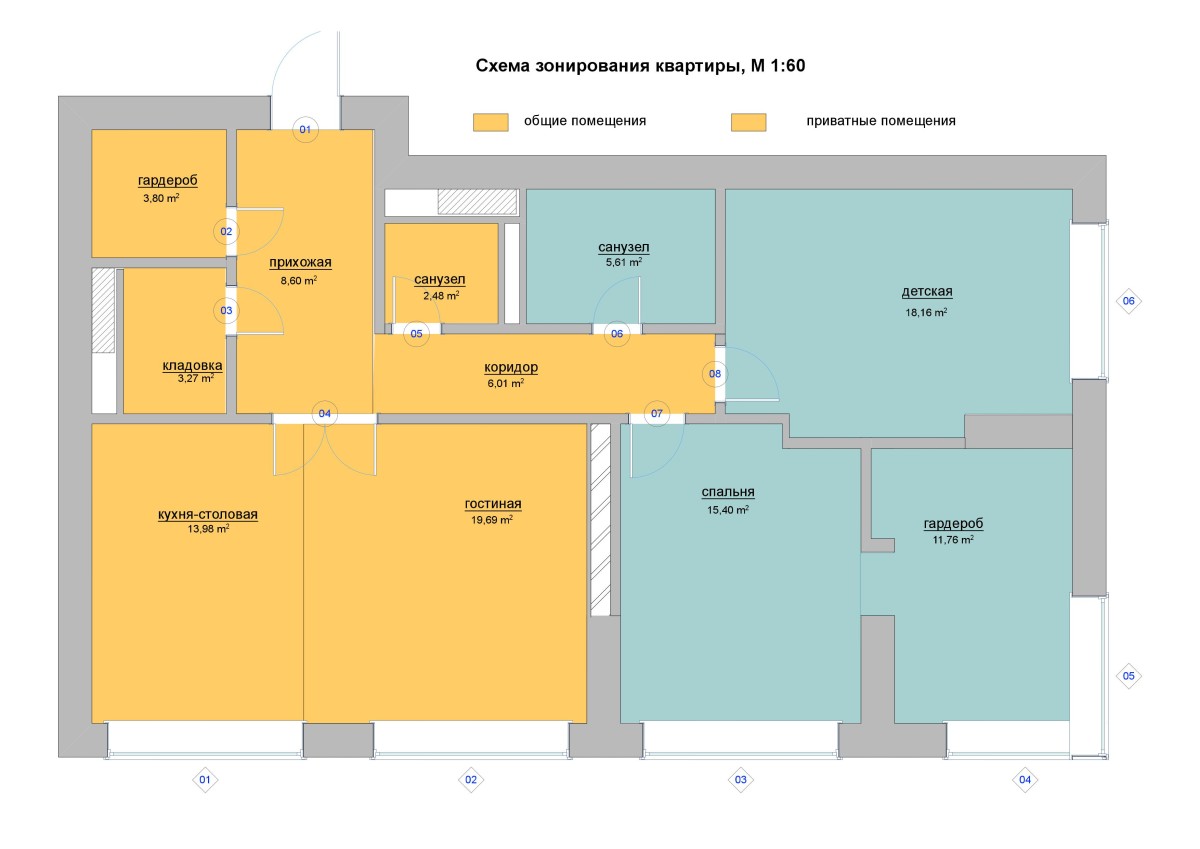 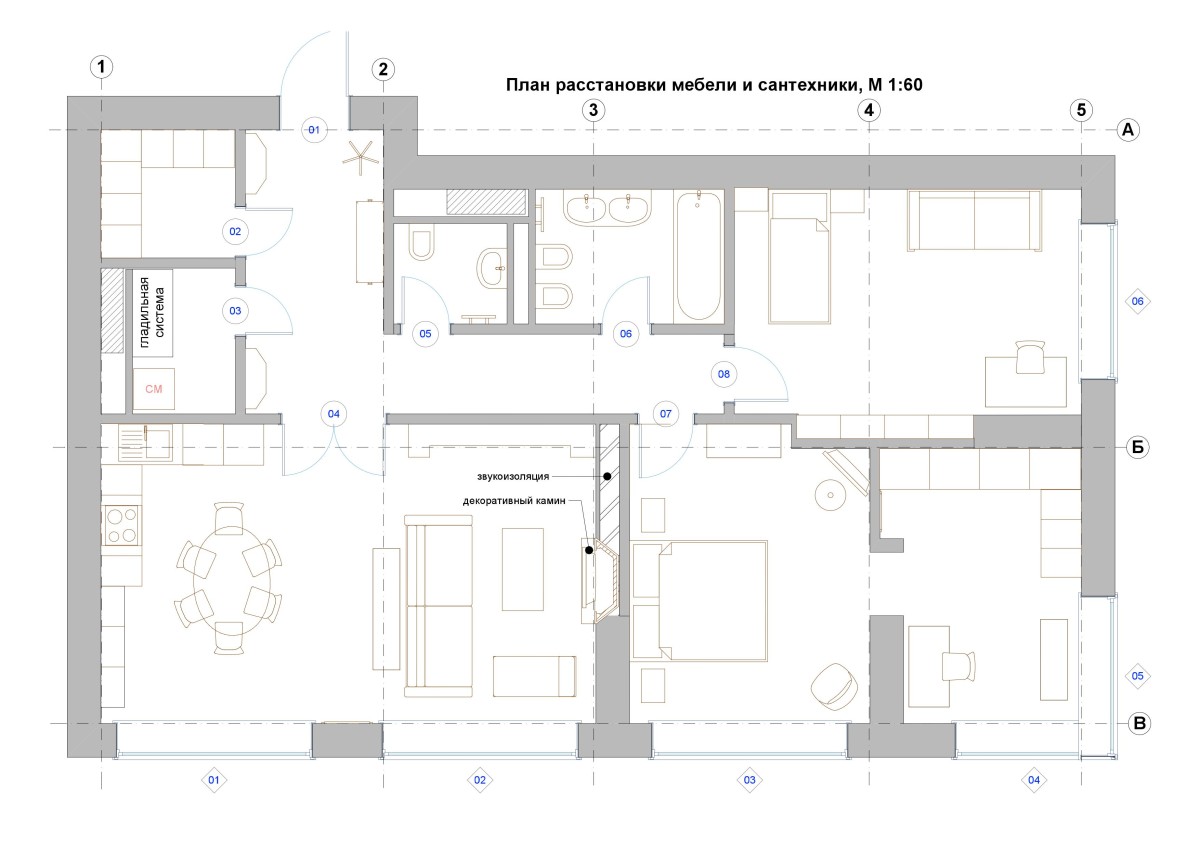 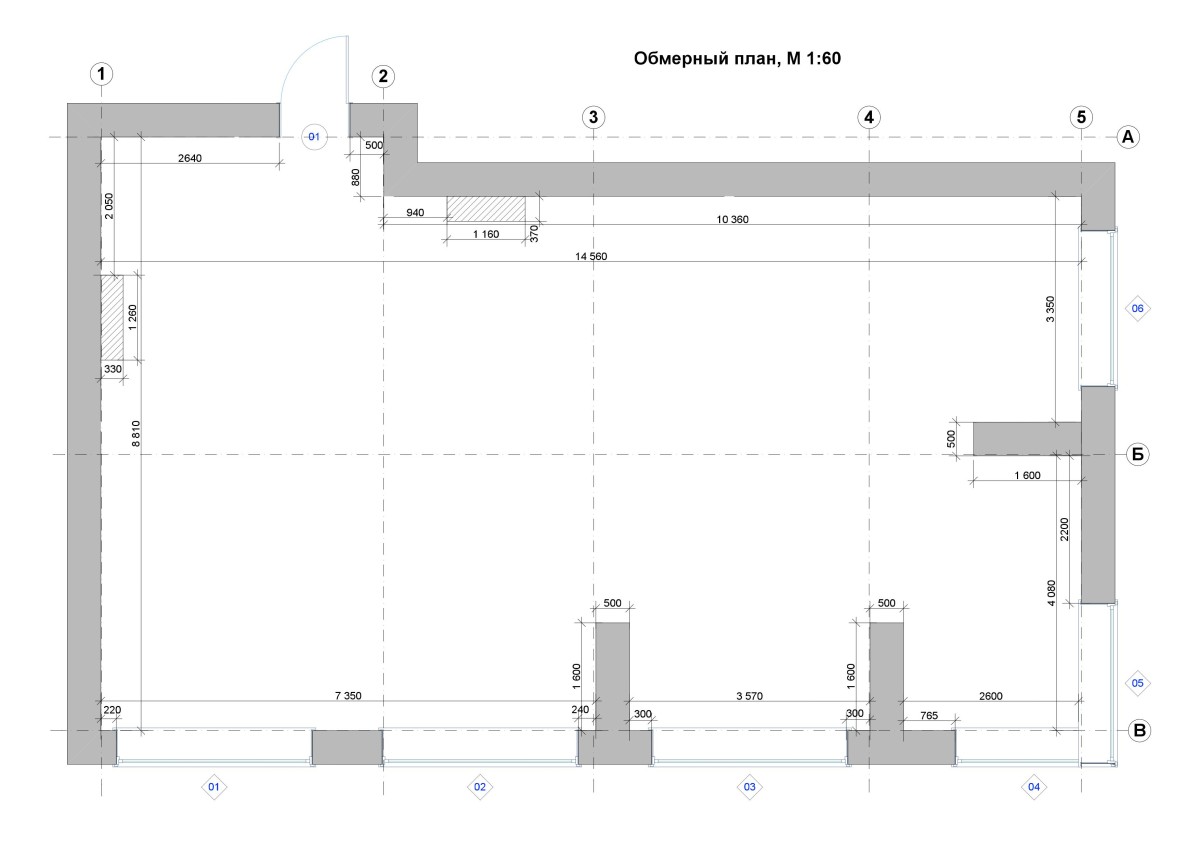 Features of the style The project is made in the classicalstyle. Customers and designer came to a common opinion that he should, first, be light, and secondly - not overloaded details. At the same time, Anastasia noted that they like the interiors, which are characterized by a light parade, which can sometimes be found in apartments with history. In this regard, the project used a lot of stucco elements, mirrors, parquet with a "Christmas tree" pattern and chandeliers with crystal pendants. The height of the doorways Anastasia proposed to make a little higher than the standard - 2.3 m at a ceiling height of 3 m, and also provide the doors with decorative upper cornices. 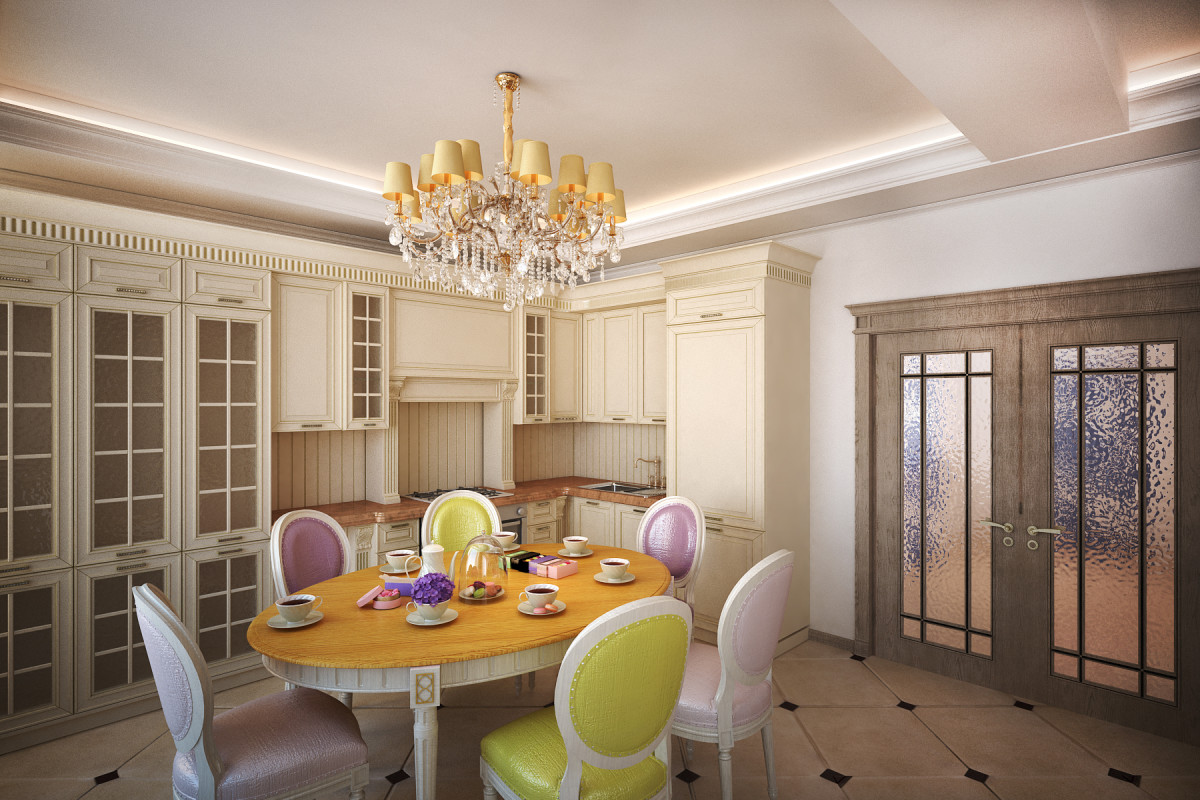 Anastasia Muravyova, designer-decorator: - For myself, I called it "the style of the Paris apartment" and was inspired by the appropriate interiors, which can easily be found in the most authoritative glossy magazines. Living room In the living room and hall it was decided to make white walls - in combination with stuccoing it immediately makes the interior elegant and does not overload the space. On a neutral bright background, bright accents have found their rightful place: chairs in the dining area and a goat by the window. In the center of the composition of the living room is a decorative fireplace. 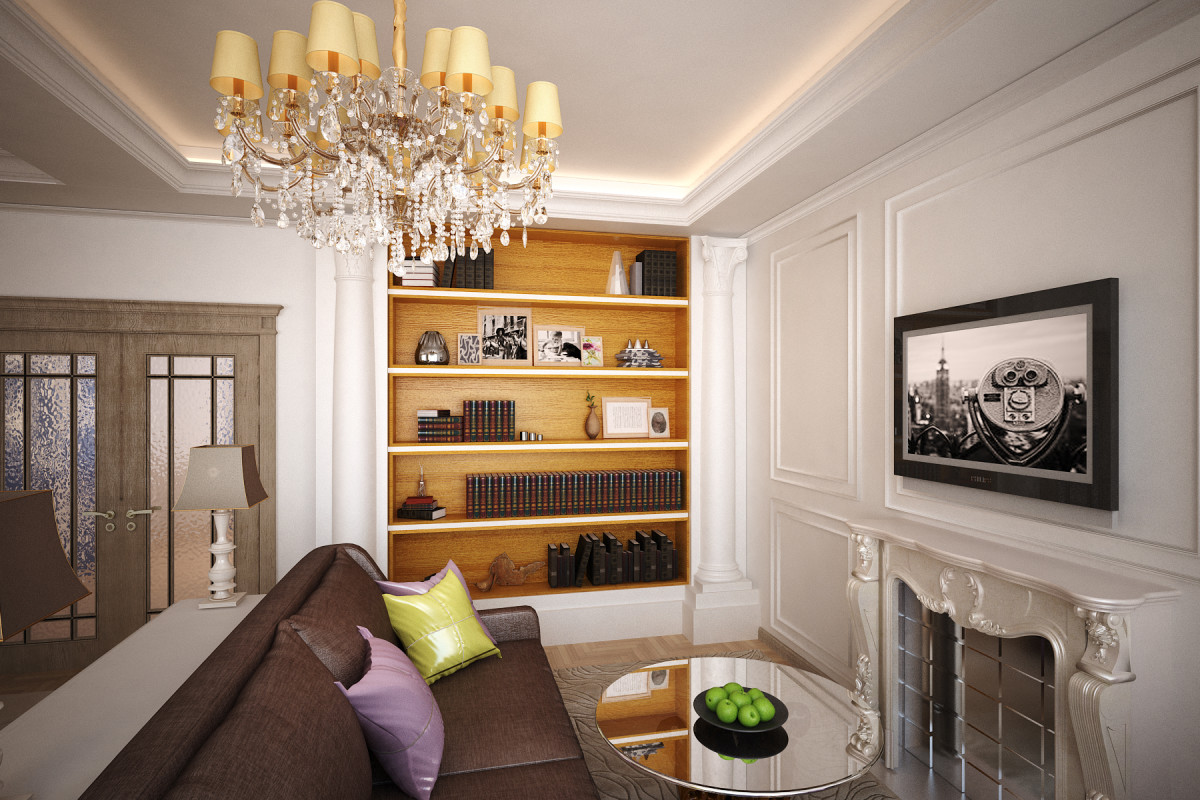 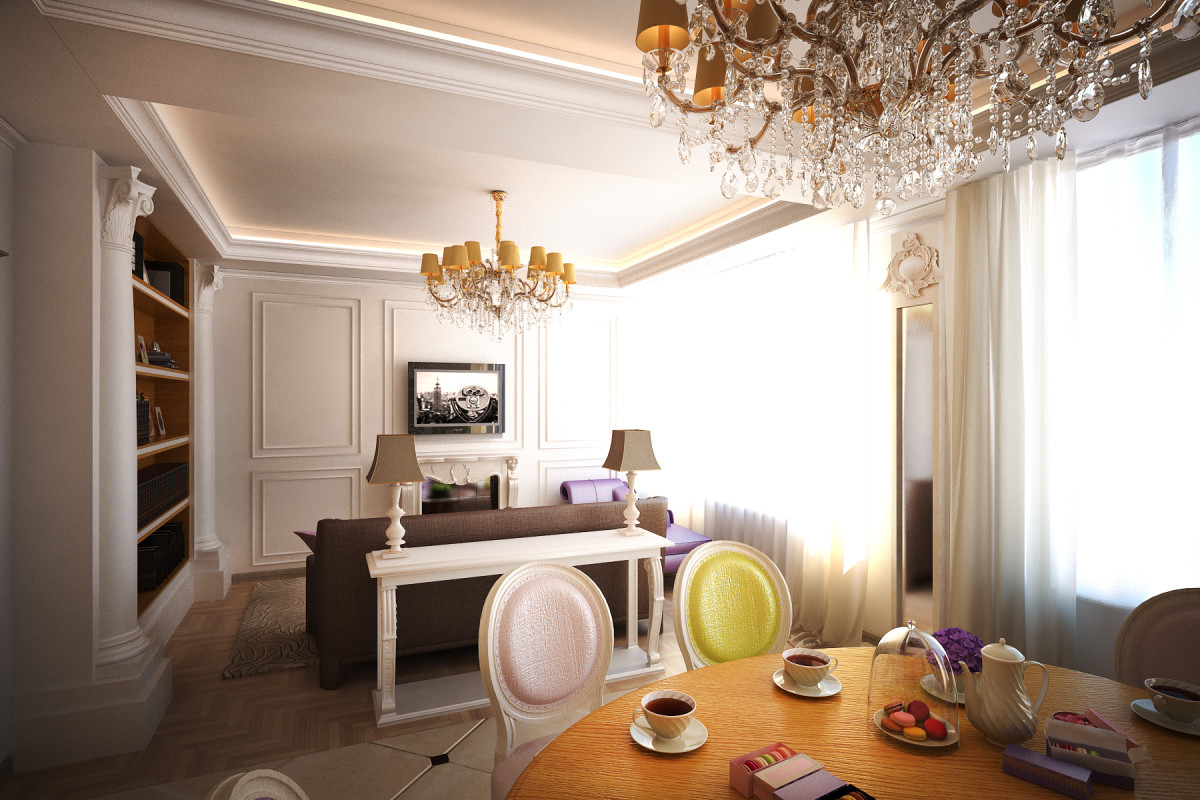 The bedroom was decided to withstand incalm light colors. As the main accent were chosen for the head of the bed, on which, like a pencil, painted classical flowerpots. Their Anastasia found the Designers Guild, as well as a fabric companion for the dressing room. 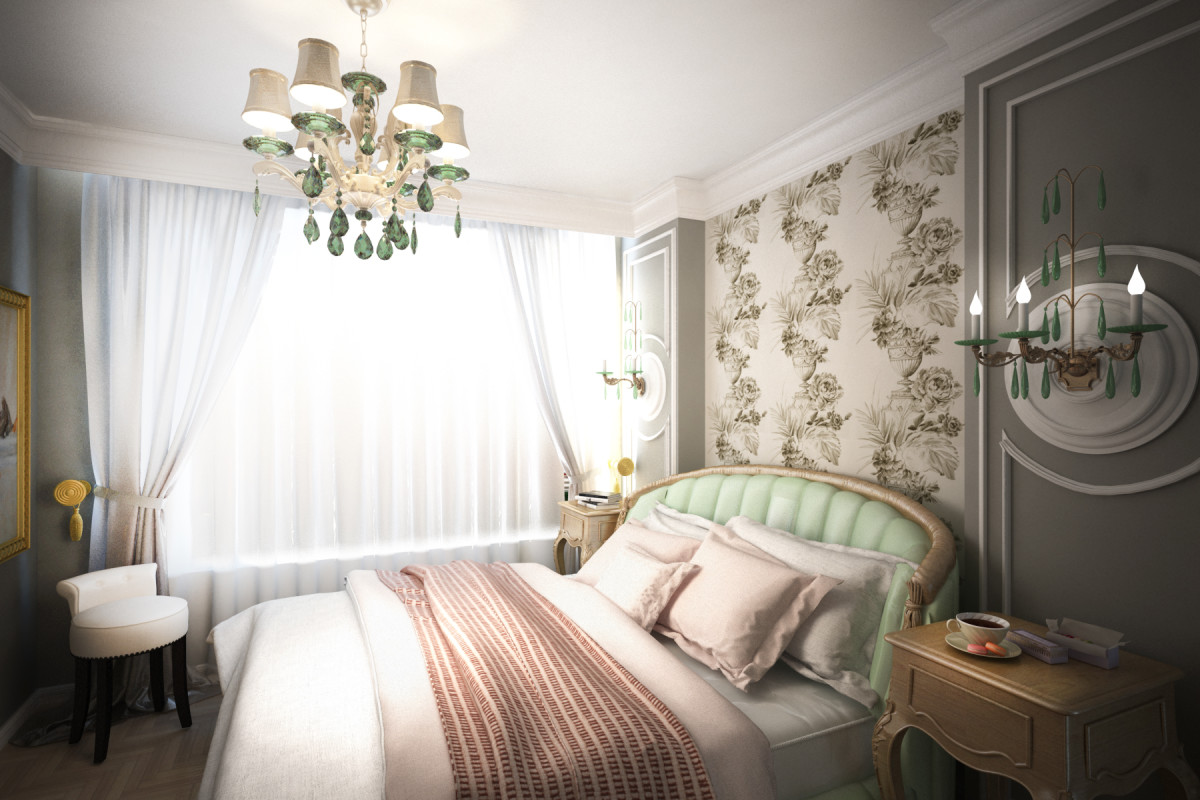 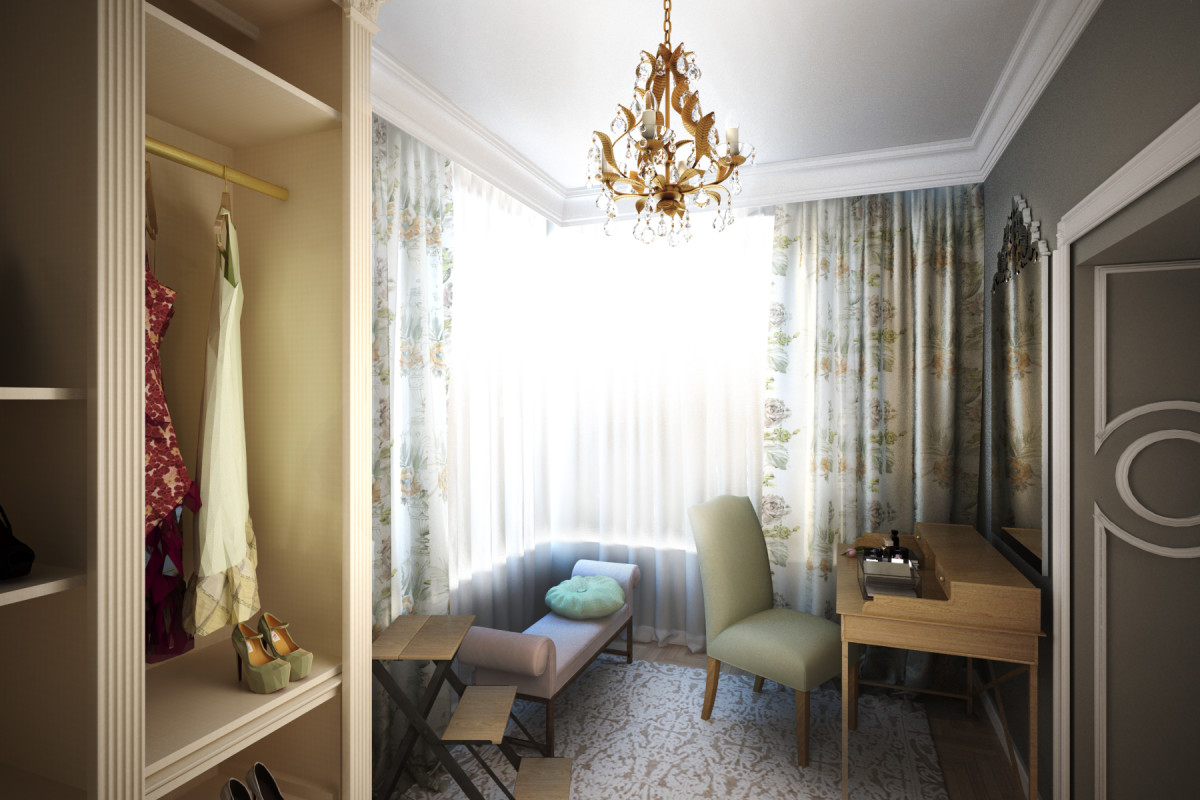 Children's customers asked the designer to doroom in the traditional blue for boys, but Anastasia decided to invite them to move away from this decision and developed two versions of the child's visualization: in the desired blue and orange-green colors. At the same time, possible variations of the layout of this room were illustrated. 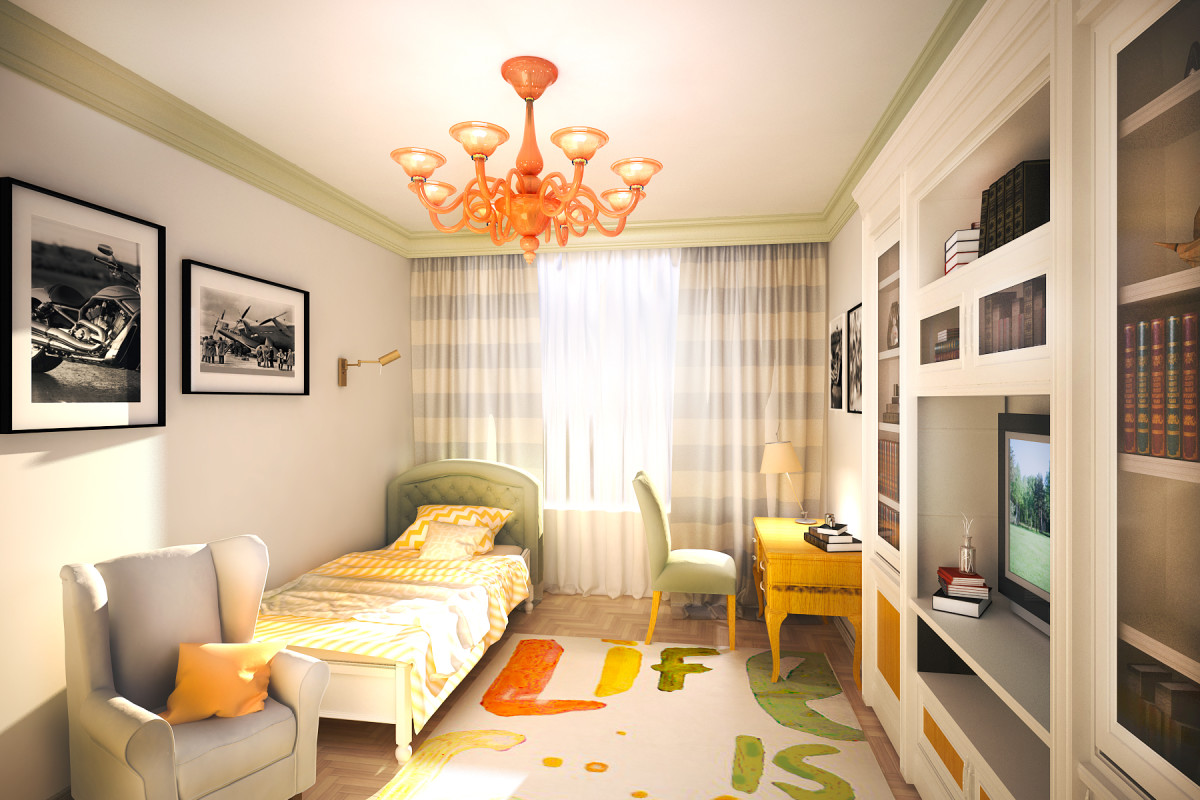 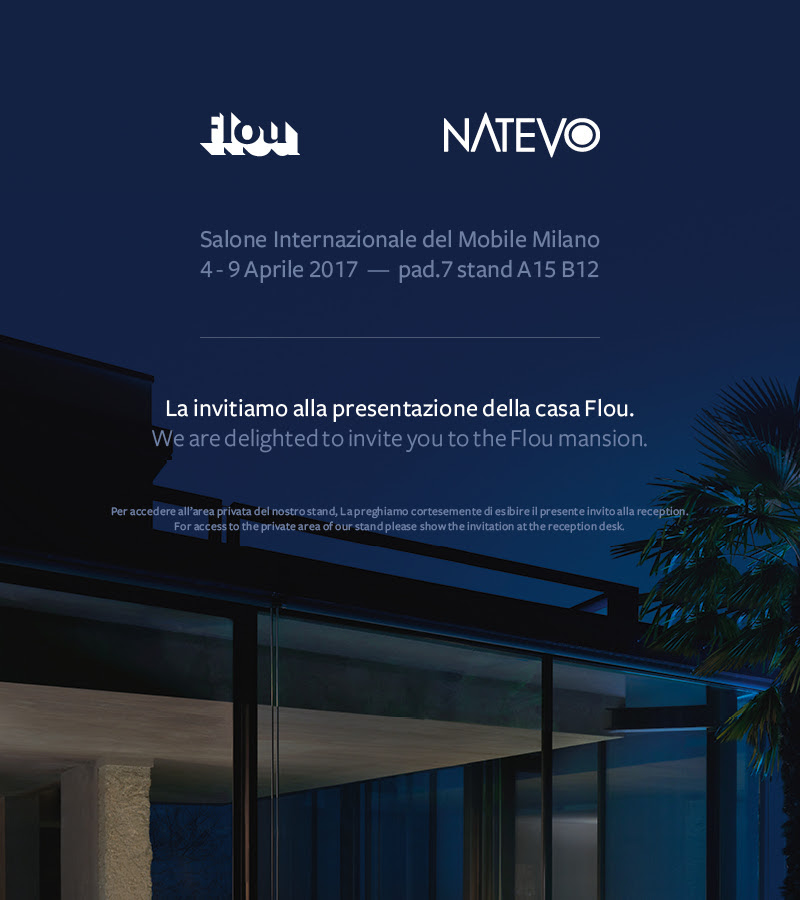 Anastasia Muravyova, designer-decorator: - I always recommend the children's school for a younger schoolboy to do a bit of "growth", because children grow very fast, and only during the implementation of the project the child will pass to at least the next grade. It is also important that the child in the classic interior is not out of the general context, but at the same time it was stylish and fresh. Bathroom In the bathroom it was decided to adhere to a more concise design and use the maximum of natural colors and textures. By the way, this method is used quite often: in a classic house or apartment, the bathroom is sometimes more reserved in style and color, and typical classical elements go to other rooms.

Anastasia Muravyova, designer-decorator: - I was inspired by the tiles from the collection of Beyond from the factory Aparici, imitating sections of onyx, and I opened it for myself thanks to the article Roomble! Timing and materials At the moment the process has not yet passed to the implementation stage, but it is estimated that this object will take approximately 4-6 months, depending on the schedule of project financing and the delivery of custom items. Anastasia Muravyova, designer-decorator: - Perhaps during the finishing works and interior furnishing there will be some amendments to the proposed concept, but already at the visualization stage I try to include in the project quite specific items of certain brands. In this project, I used furniture, lights and mirrors from such brands as Mis en Demeure, Riva, Baga, Marie's Corner and La Murrina, plumbing and mixers Teuco, etc. Thus, the process of furnishing the interior will be quite fast and well planned.

Nordic high-tech with windows on the floor: apartment in Moscow - etk-fashion.com

A vivid example of modern classics: a three-room apartment in Moscow

How the producers live: the attic apartment with an outdoor terrace in Moscow - etk-fashion.com

Large and bright apartment in the French style in Smolensk