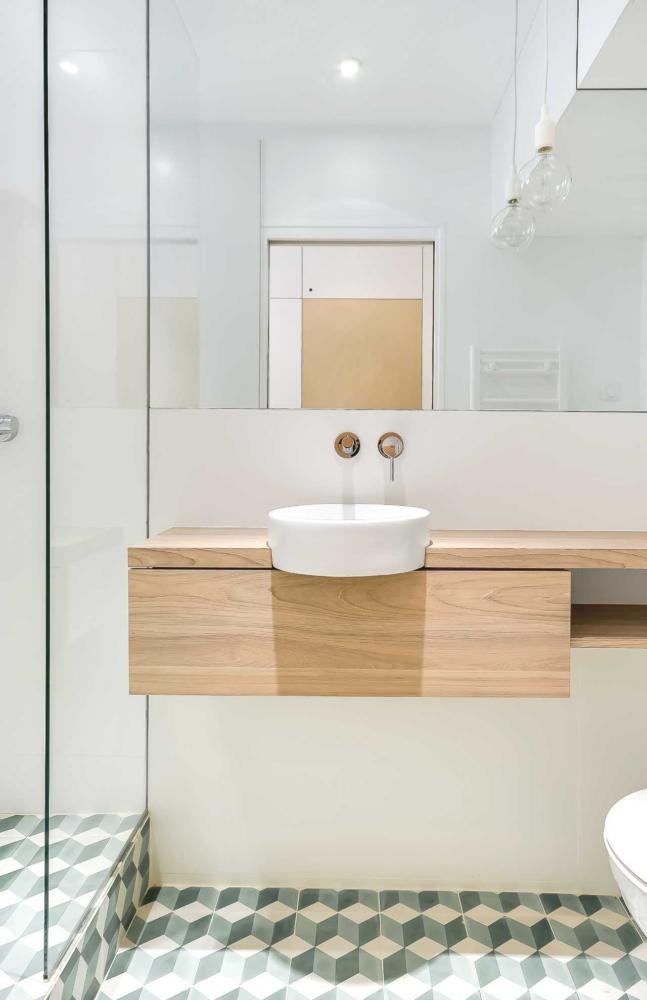 Recipe for a perfect one-piece area of ​​30 squaresSimple: the simplicity of the Scandinavian style, the French ingenuity and reasonable minimalism. We disassemble all these components on the example of an apartment for a young couple in Paris. The condition in which a young married couple from Paris got a new home, they were completely unhappy: an already small apartment with an area of ​​only 30 square meters. M was divided into four tiny rooms, unsuitable for a comfortable life. To fix the uncomfortable layout, make the apartment more functional, and the interior - modern, young people turned to the architect Richard Guilbault for help. 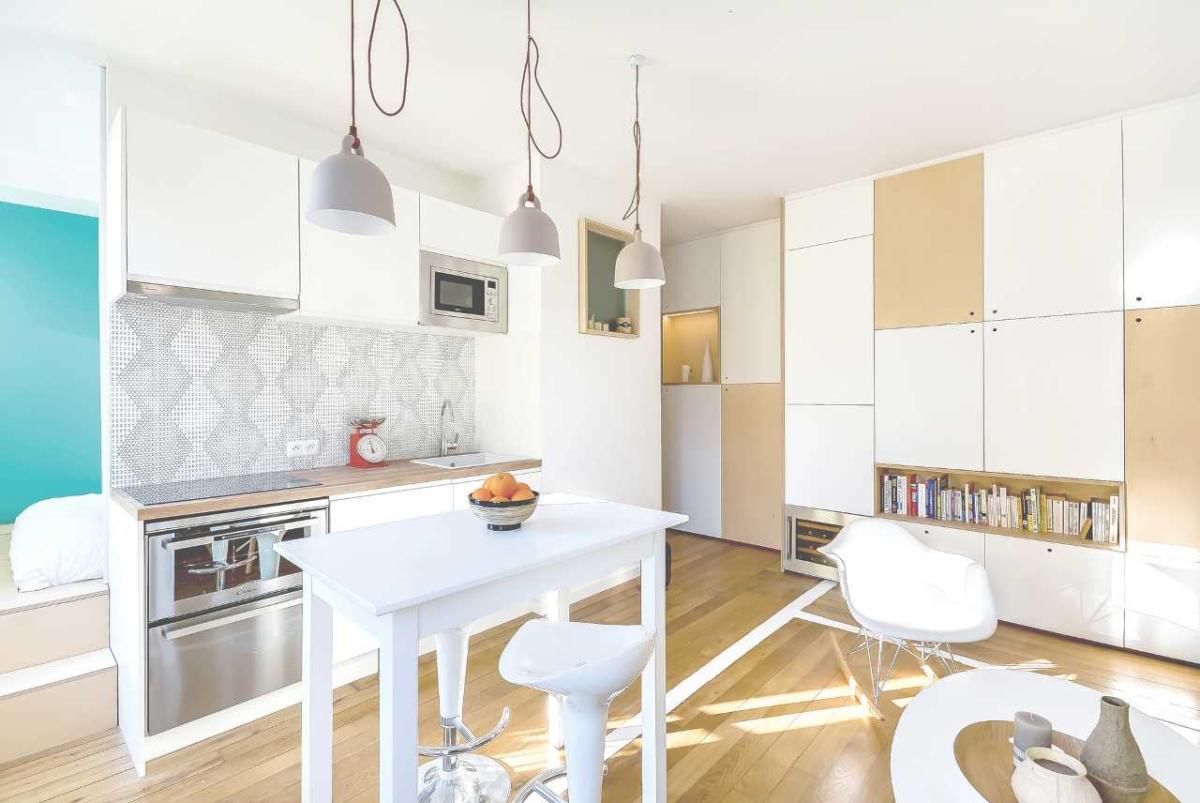 In form, the flat was not exactly flatSquare with sides of 5 m and 6 m, so it was decided to give about half the area under the public zone, and private rooms - bathroom and bedroom - separated from it by an easy sliding. For the kitchen-living room area, the most illuminated part of the apartment with two windows was chosen. 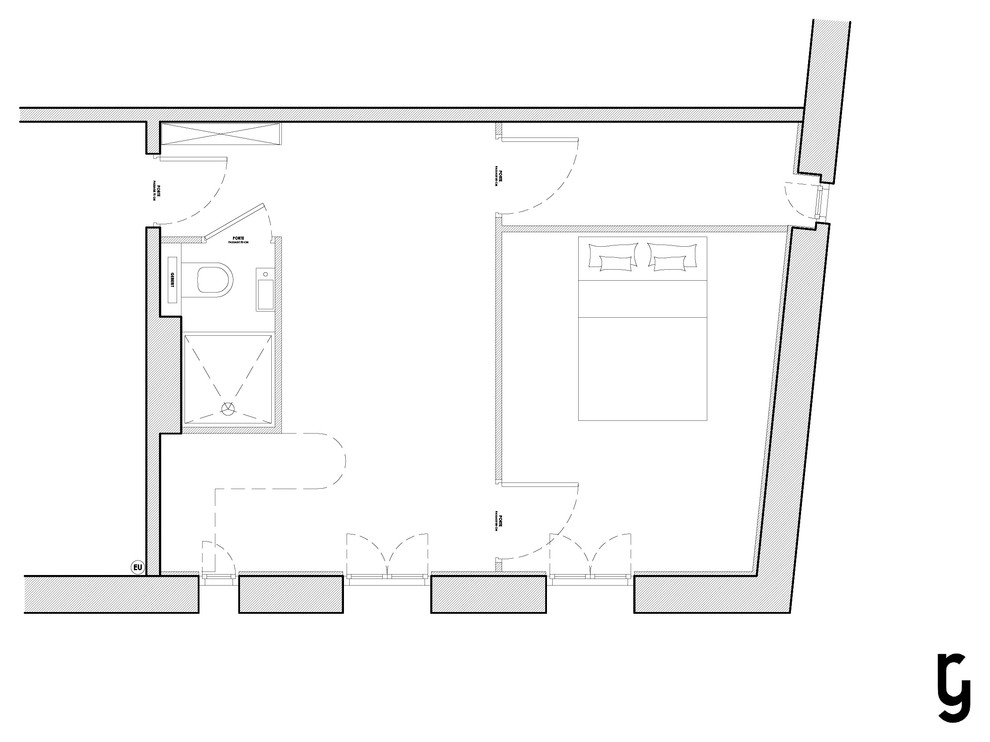 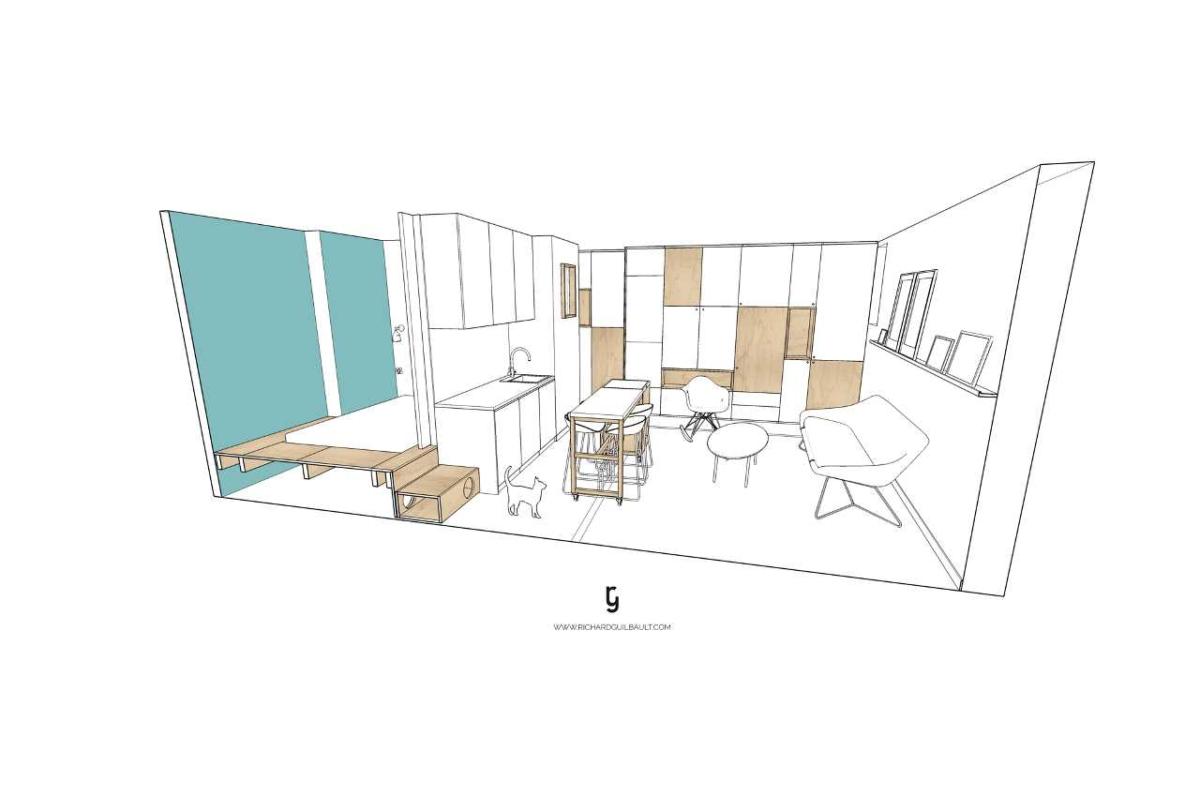 Traveling around the apartment starts with a smallCorridor, enveloping the bedroom and kitchen and "flowing" into the public zone. Here, the designer decided to place the main storage system - a large built-in wardrobe in the entire wall, from the entrance to the end of the living room. In it not only there was a place for all sorts of trifles, but also a refrigerator, a technical compartment, a small wardrobe, a wine cabinet and even a TV! 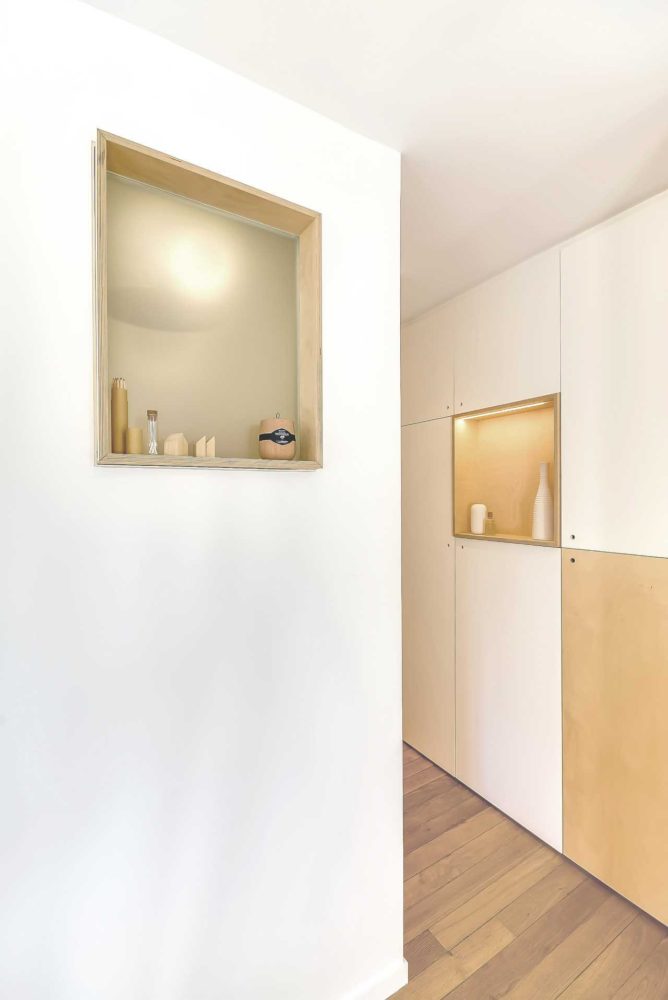 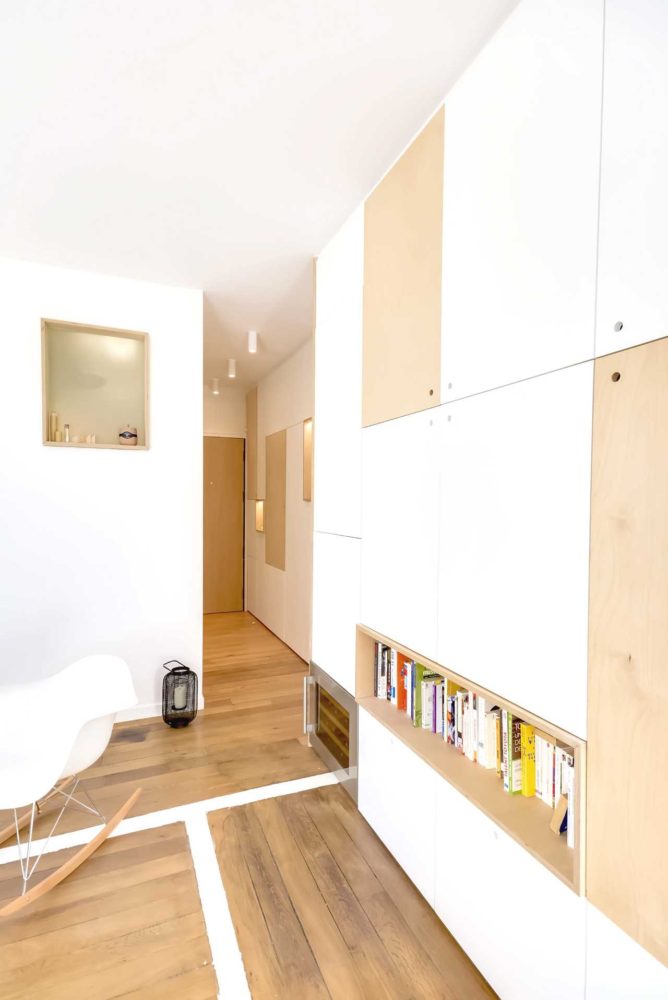 Despite the fact that the cabinet is built-in, it does notRepresents a single line: in the zone of the living room, the depth of the compartments is more by 40 cm, since they are intended for storing larger objects. For the facades chose two colors: a light birch and white, which perfectly harmonize among themselves and do not overload the interior. In order not to disturb the unity of the surface, the traditional ones were replaced by small round holes. 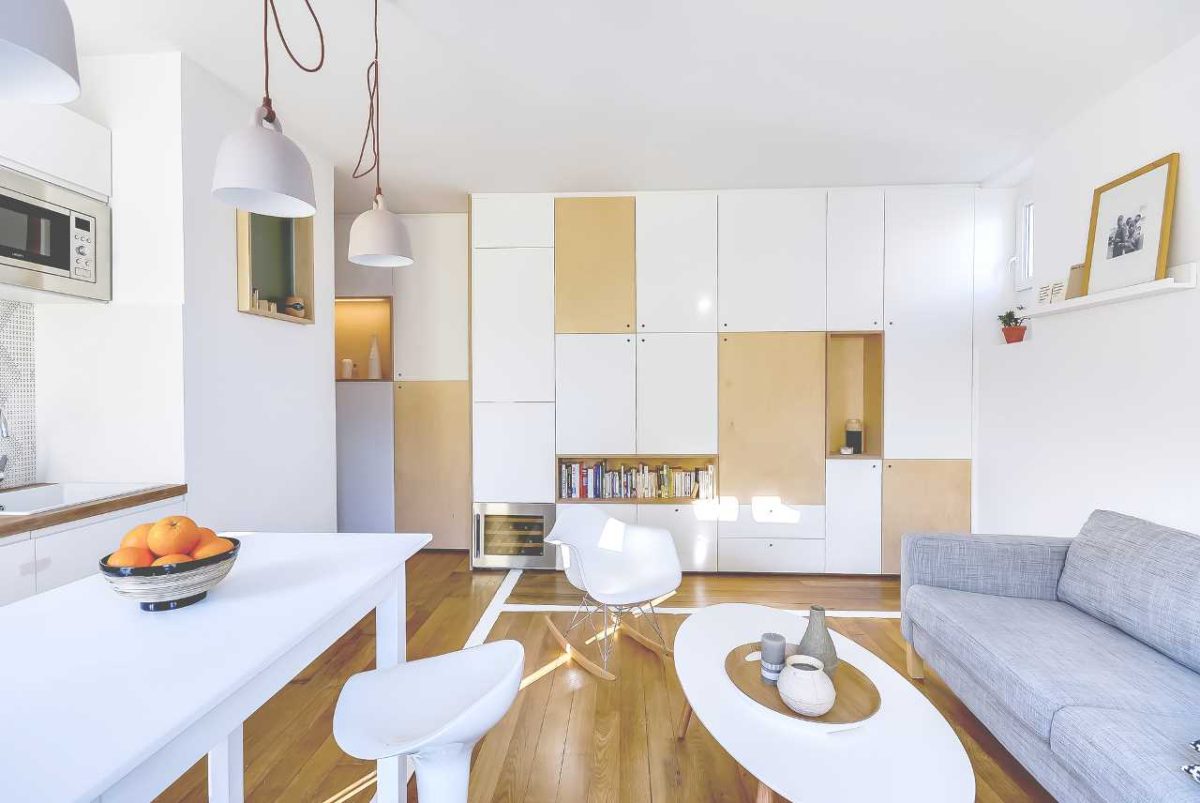 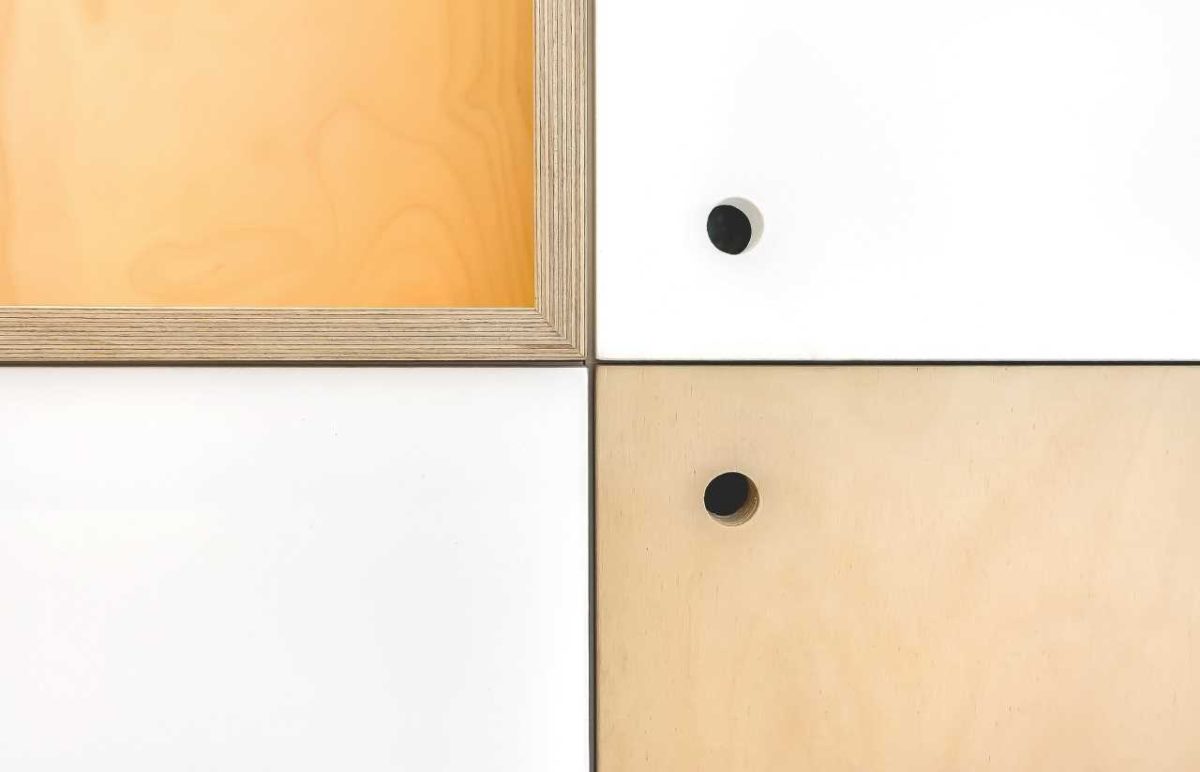 Thanks to a minimalistic atmosphere, lightPalette and south-facing windows the space of the public zone looks not only spacious but also cozy even with a small amount of decor. A compact dining group is zoned with three luminaires arranged in aluminum and quite mobile: if you need to free space, a small table and bar-type chairs can be easily pushed aside. 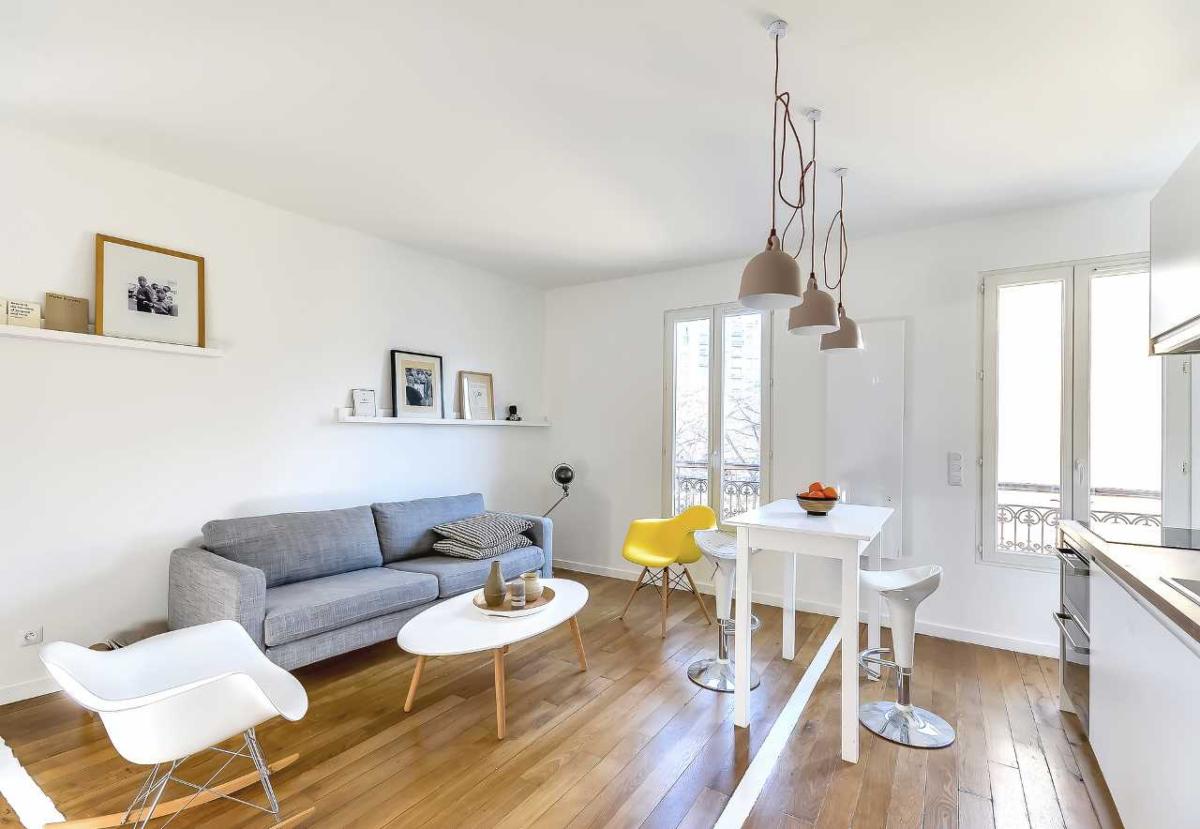 The main idea of ​​this interior is the maximumPracticality with minimal visibility. That's the radiator, replacing the central heating batteries, which are not in the apartment, the designer placed not in the usual place, but on the wall between the windows. The device resembles a poster or an element of decoration rather than rushing into the eyes, while it is very functional: it can be programmed according to the needs of the owners, and at maximum it can evenly heat the entire apartment. Behind the kitchen there was a separate bedroom area,Which, despite the small area, turned out very convenient. The double bed was set on a raised platform, inside of which an additional storage system was organized. Also, the designer has provided a separate entrance to the sleeping area for the cat, so that she can easily reach the owners at any time. 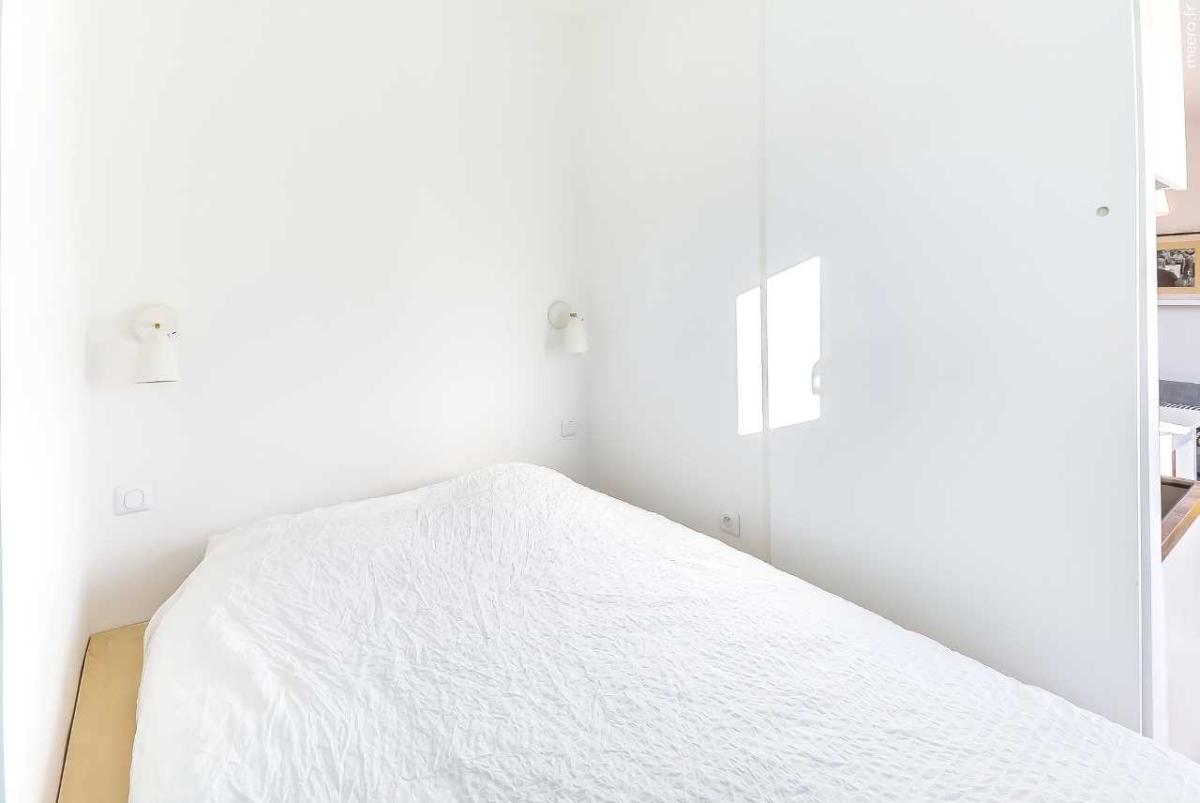 The most difficult work was with the bathroom: On an area of ​​only 2.3 square meters. M it was necessary to place everything necessary by some miracle. The situation was saved by custom-made small-sized furniture and a shower cabin. To make the bathroom lighter and more spacious (the only small window did not go out into the street, but into the living room), the designer used the already familiar combination of light wood and white, as well as cement tiles with a small and non-contrast geometric pattern on the floor. Visually increase the space of the bathroom helped and a large one without the frame that was hung over the sink. How to equip an apartment with an attic: a bright and non-standard example from Paris - etk-fashion.com

How to combine apartments competently: an example from Moscow region - etk-fashion.com