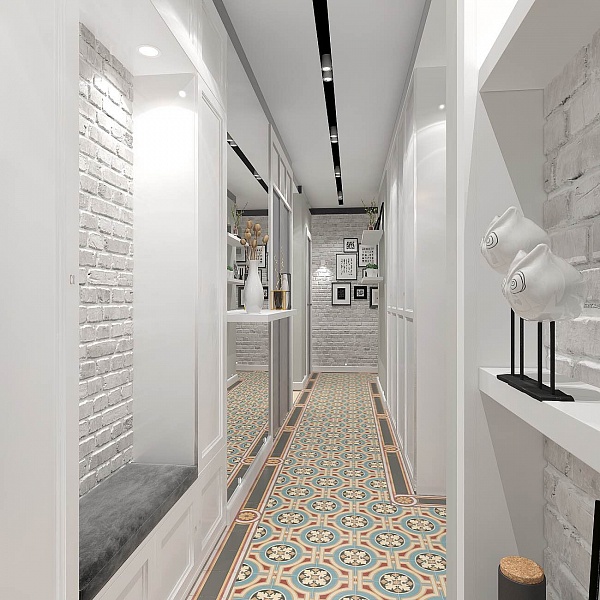 How to combine under one roof at once threeApartments, properly zoning them and making a non-standard layout maximally functional, and the interior - bright and unusual? Understand the example of a five-room apartment from the studio Zi-Design Today, in front of you a very unusual project: it's not about one apartment, but about three! And all three customers - a young, active and very positive family - wanted to "assemble" into a single dwelling. Maria Zarodova undertook this extraordinary, sometimes difficult, but ambitious and uniquely interesting project. Maria Zarodova, designer Graduate of the Architecture and Construction Department of the Yaroslavl State Technical University. He believes that beauty in modern housing and the pace of life is not justified if there is no functionality in it. In the work he prefers a lot of light and air, the customer's needs connect with his vision and design solutions. Www.zi-design.ru Combining just three different apartments into one determined the non-trivial nature of the layout: for example, it was impossible to avoid a large number of narrow corridors. This feature, Maria beat with the help of built-in furniture and various visual divisions. They also helped to divide the housing into several functional zones: working, "adult", children's and general. 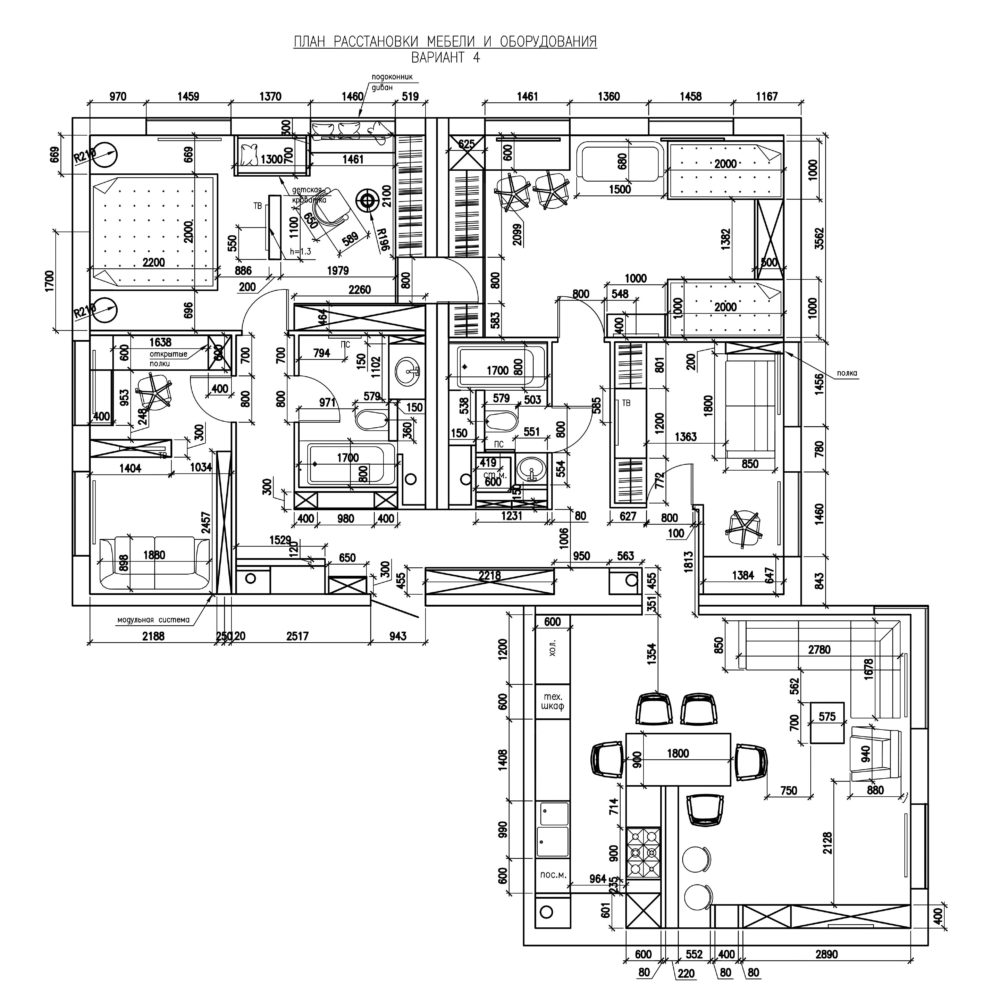 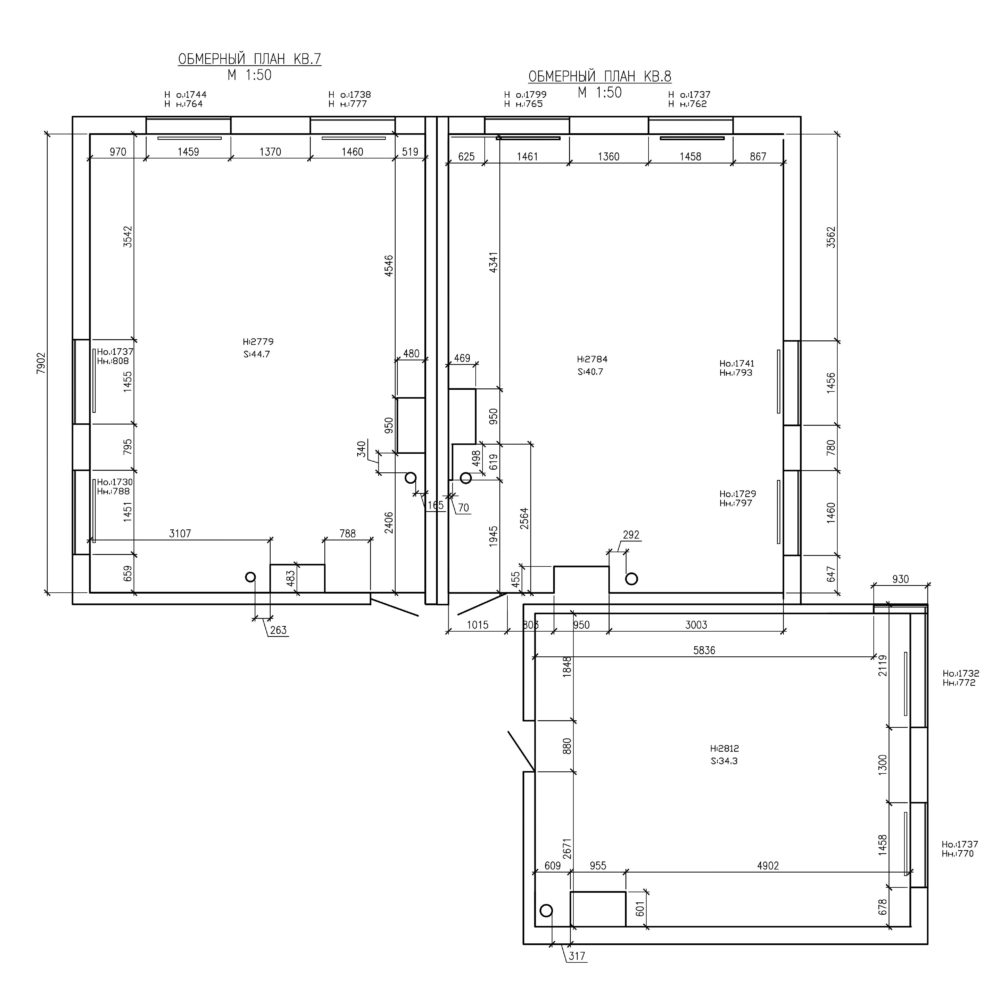 Maria Zarodova, designer: - The idea was very difficult: under the general concept and the mood to make the most varied premises. So that during the transition from one to another the mood would change, but the apartment still had one rhythm and atmosphere. Inspiration for me was primarily the customers themselves, as well as a huge number of different textures, prints and shades, which we saw during the definition of the concept. As we have already said, a lot of corridors were formed in this apartment. One of them leads to the "adult" zone, where the customer's office is located, the combined bathroom of the owners of the apartment and their bedroom. The cabinet serves as a kind of "berg", where everything looks exactly as the host wants. 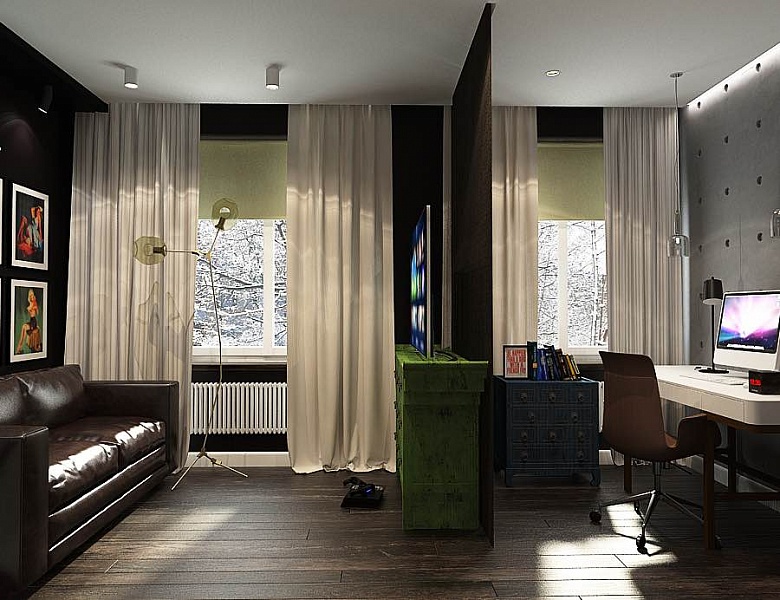 This room turned out to be very brutal, withWiped, as if already "aged" surfaces. It perfectly reflects the true male spirit and the mood of the bar or garage. At the same time accents in the form of modern lamps, posters and other decor items add an appropriate proportion of the interior to the interior. 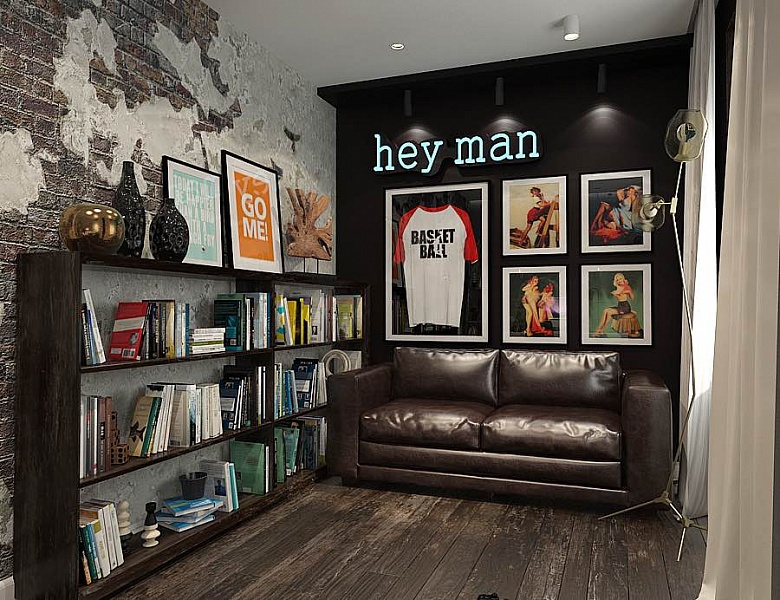 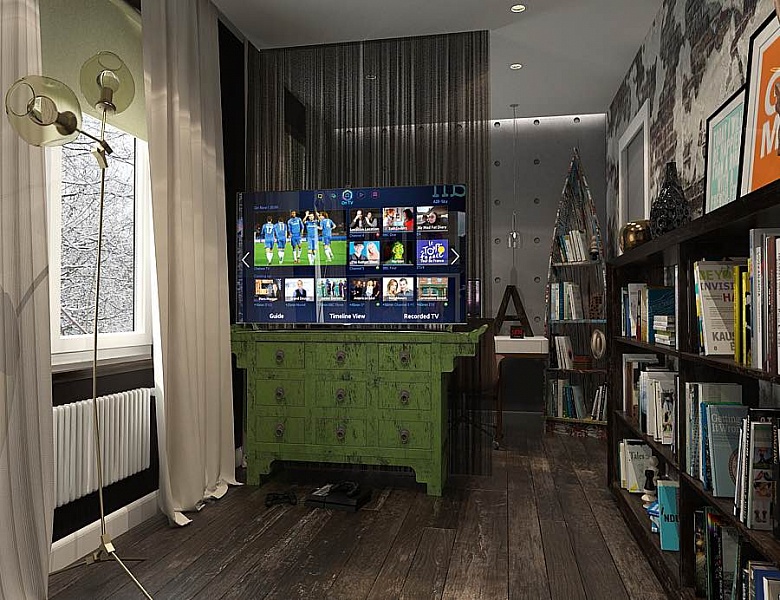 The bedroom had to pass all the loveCustomers to the Scandinavian style, not necessarily directly. In this interior, bright walls are sent to it as a background, light furniture, warm shades of the tree and bright decorative accents. 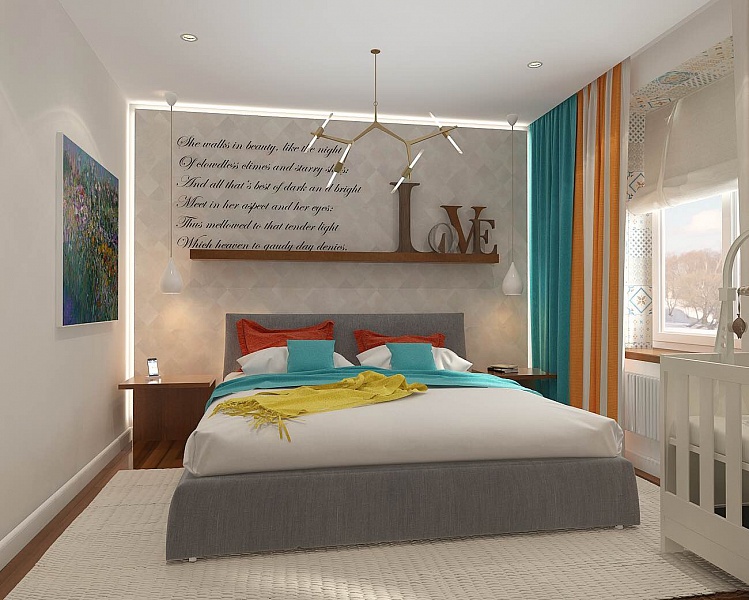 In the center of the room was a column, alsoIt was necessary to somehow beat. It was decided to use it as a zoning tool that separates the parents' sleeping space and the TV zone from the baby cot, which was born when the project was being worked on, and recreation areas. This side of the column was given under the mirror and the console shelf, replacing the hostess dressing table. As the parent bedroom - adjacent to the room of younger children, Maria came up with an interesting move: to hide under a facade of the room a secret door from the bedroom to the nursery. In the "younger" children's designer another difficult task awaited: not only to organize a secret door to the parents' bedroom, but also to create a comfortable and harmonious space for the boy and girl. Until the newborn remains in the bedroomParents, and only their daughter will live in the room. However, when the baby grows up, he will be her company, so in the nursery there should be only two: two beds, two bedside tables, two chests, two workplaces and two independent, but combined with each other. In addition, the children had to turn outSo diverse in its functions and so interesting to its owners in terms of games and development of creative abilities, that the solutions for this room were the most difficult. In the process, a chalkboard for drawing appeared in the nursery, open storage systems, a comfortable sofa with a TV-zone and two soft carpets for playing on the floor. Another child's room - the eldest son - already,Rather, teenage. Wishes were such: it should reflect boyish character, youthful mood, this maximalist view of many things, be interesting, multifaceted and contribute to the solution of creative tasks. Thinking about the interior of this room, MariaTried to give her character, to make it reflect the inner world of the boy and become his favorite room in the house. For this the designer used bright colors, various textures and prints, interesting forms of furniture, decor and lamps. 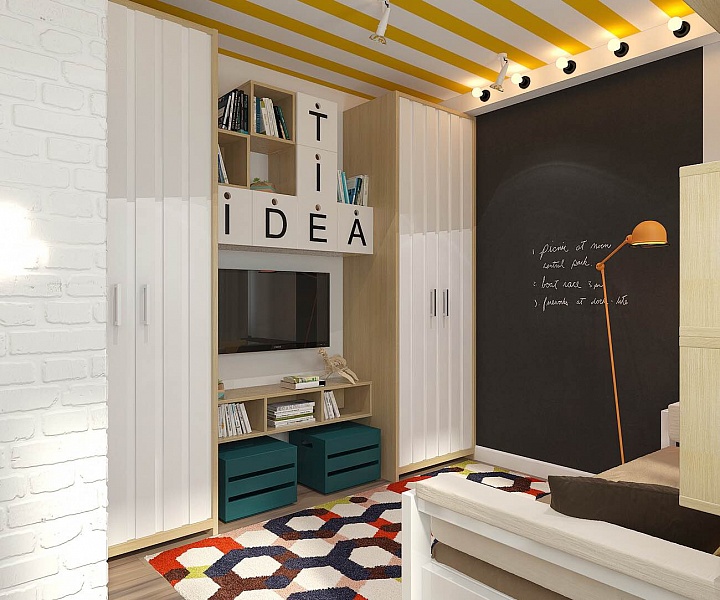 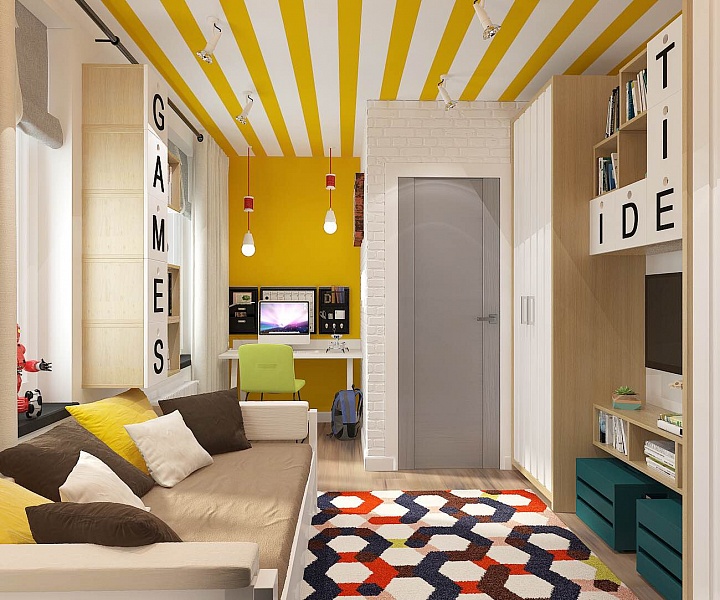 At the end of the "children's" corridor - the second bathroom. It turned out to be simple, but very cheerful, bright and colorful, charging vivacity and positive energy. This was achieved through a mix of multi-colored tiles, the overall diversity of which is diluted in white.

In the second we also see tiles of variousColors and patterns on a background of simple shapes. Despite the apparent abundance of textures and colors, a cheerful patchwork on the accent wall, an abundance of white, black and white and orange mosaic are perfectly combined with each other. In this room everything has grown together in a single eclecticSpace with a lot of textures, materials and forms and a characteristic for this apartment variety of flowers. Nevertheless, the premises turned out to be very harmonious, with a single atmosphere and references to the Scandinavian style beloved by the owners. Maria Zarodova, designer: - This is quite special for me and, perhaps, my favorite space in the whole apartment. The implementation of the project continues to this day, and I want to believe that this room and the whole apartment will end up exactly as they are represented in the visualization. In the corridors, the color scheme is the calmest in the whole apartment: the main colors are white and shades of gray. As an accent - patterned, we also see a traditional combination of different finishing materials and textures. And due to the light walls, mirrors and spotlight, the space looks wider and more spacious. 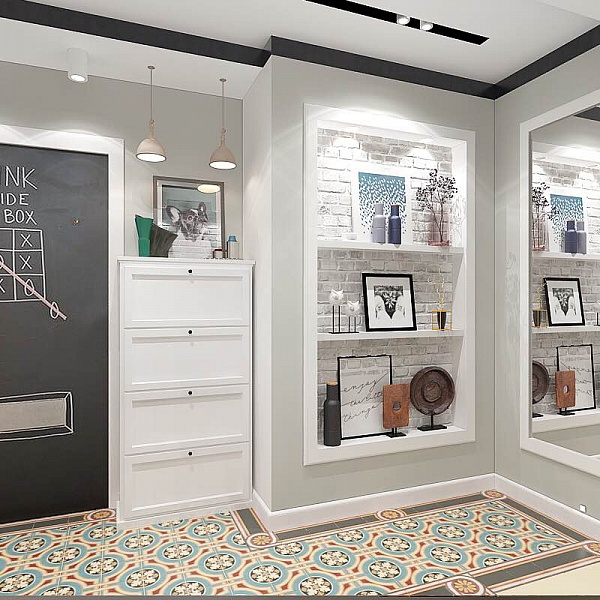 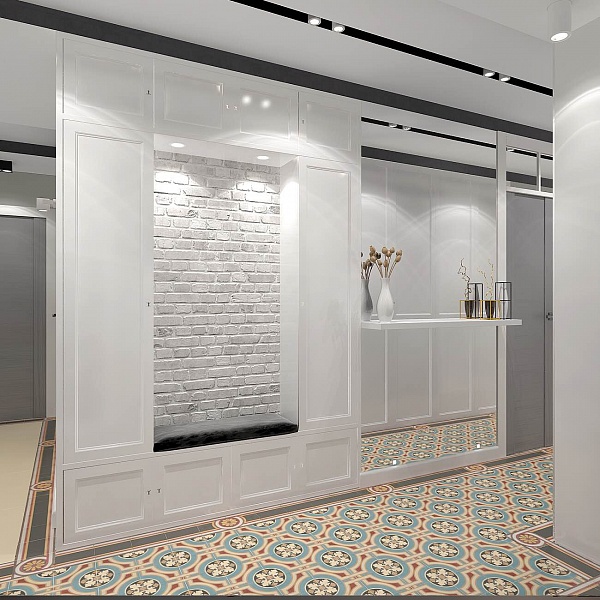 How to make 1 650 from 500 square meters: an example from Moscow region - etk-fashion.com

How to build a large house in a limited area: an example from the Moscow region