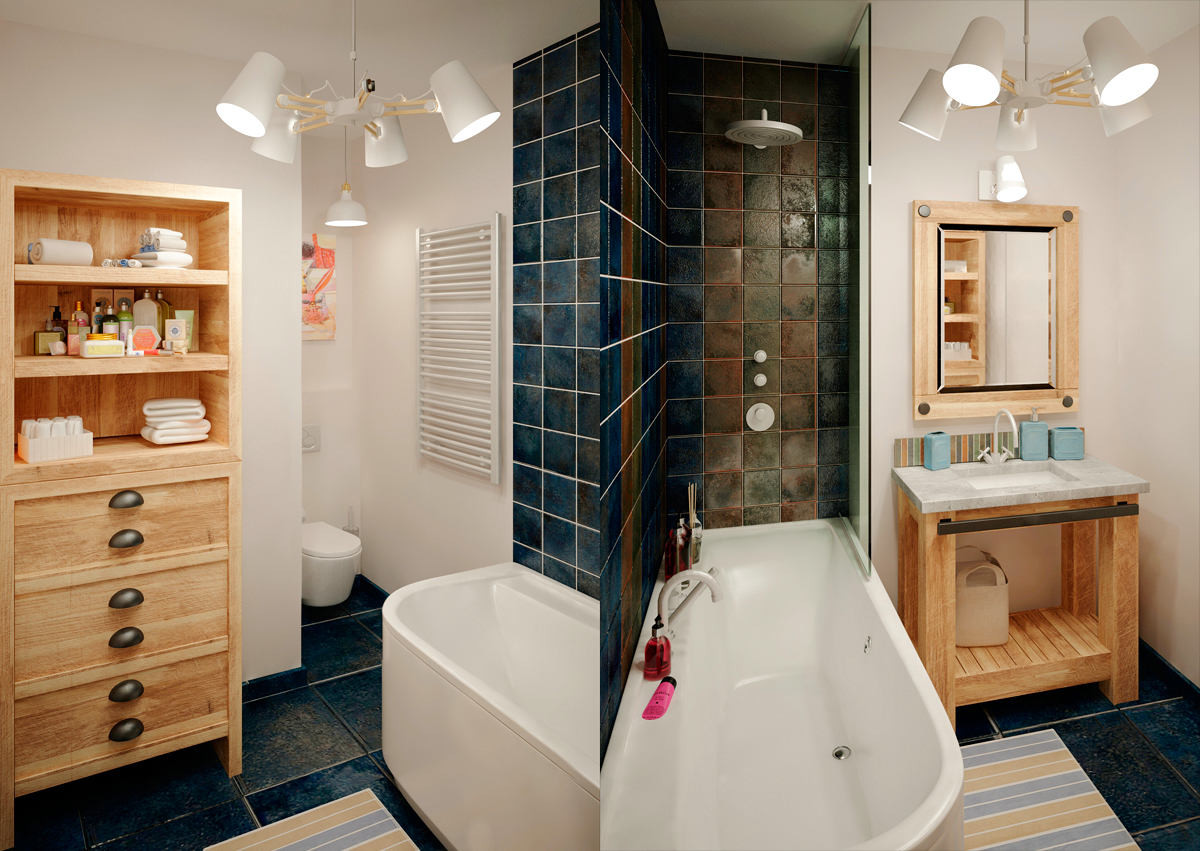 As from a gloomy three-ruble note, where catastrophically notenough daylight to make an airy, interesting and bright space? Today we will introduce you to the apartment of the young spouses, and we will tell you how their home was filled with light. Our heroes today are young spouses, very positive and cheerful. They are young, in love and cannot imagine life without constant movement. Their main passion is cycling. When they bought this apartment, they were faced with the fact that there was very little daylight, and the space was so closed that it depressing them and interfered with the dynamic movement around the apartment. Then the guys decided to turn to the design studio Mooseberry Design Group, which specializes in open spaces, for help. Not so long ago, we introduced you to their work -. Denis Garbuzyuk and Nika Los, designers of the studio Mooseberry design group We have already written about the works of the studio, you can familiarize yourself with them and find out more information about the designers. facebook.com/mooseberry.design

Having started to work on a project, the designersthe studios immediately realized that they could not do without a global redevelopment. They got a three-room apartment with separate bathrooms and a long corridor that did not get light. To solve the lighting problem in the corridor, the designers ditched the door to the living room, instead widening the passage. The wall between the small and large corridors was also removed, allowing more air to enter the space. The bathroom was combined with a bath, as a result of which a laundry appeared here. The square meters of the bedroom had to be sacrificed a little to get a flat kitchen space. The only thing that the designers have left unchanged is the balcony. Denis Garbuzyuk and Nika Los, designers of the Mooseberry design group: - There are many interesting details in this interior. Probably the biggest plus and our personal achievement was the redevelopment. Thanks to this, the apartment has become brighter and more spacious. We really like the open plan that came out. At the same time, there is a certain privacy. The bedroom is far enough from the entrance, the work area is also separate, which allows you to work at any convenient time and not disturb other family members. 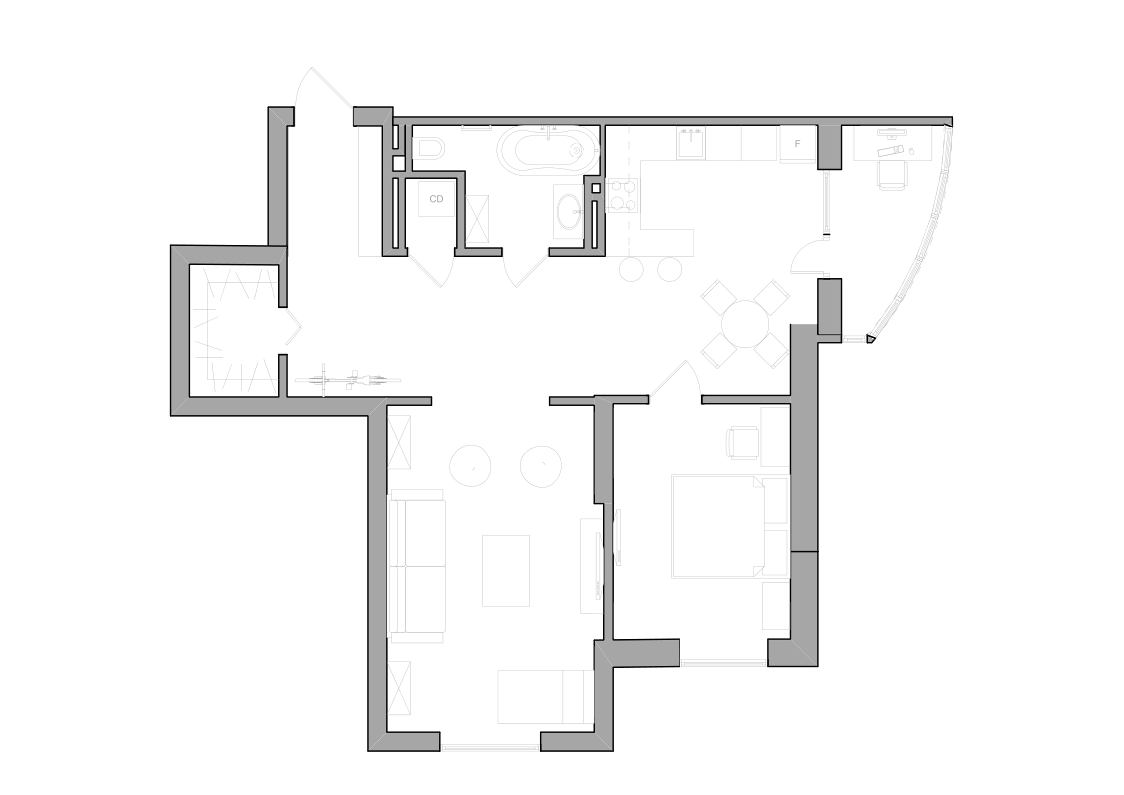 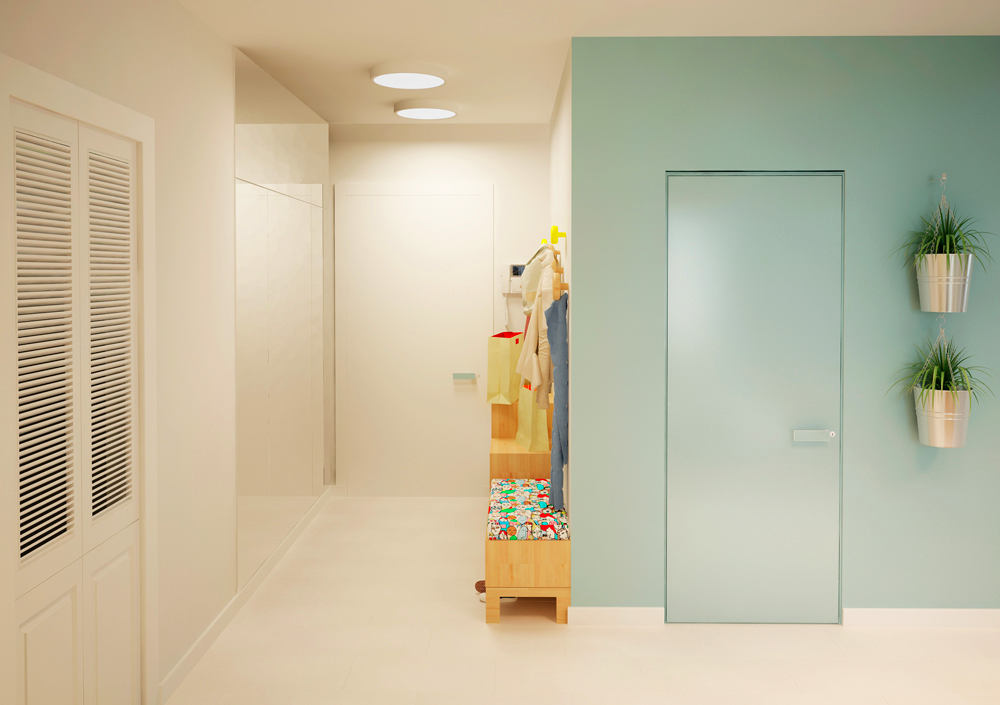 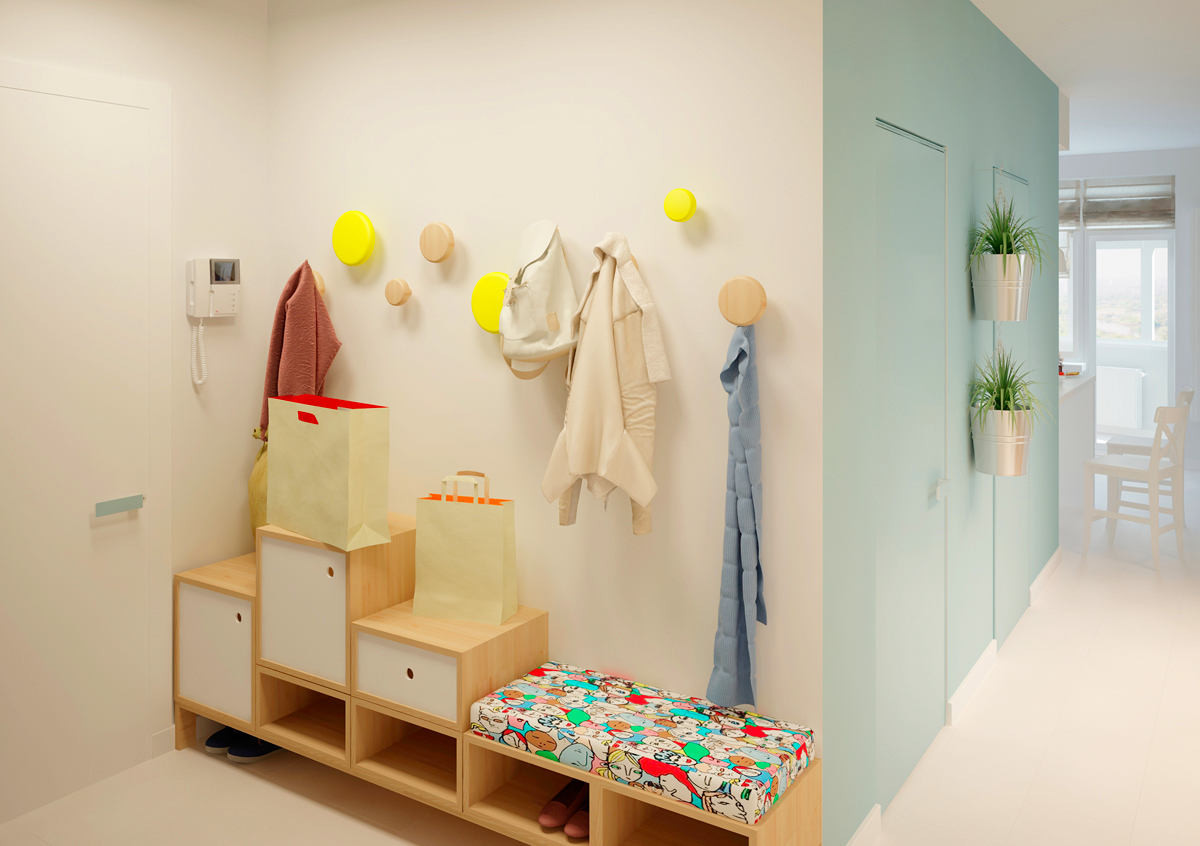 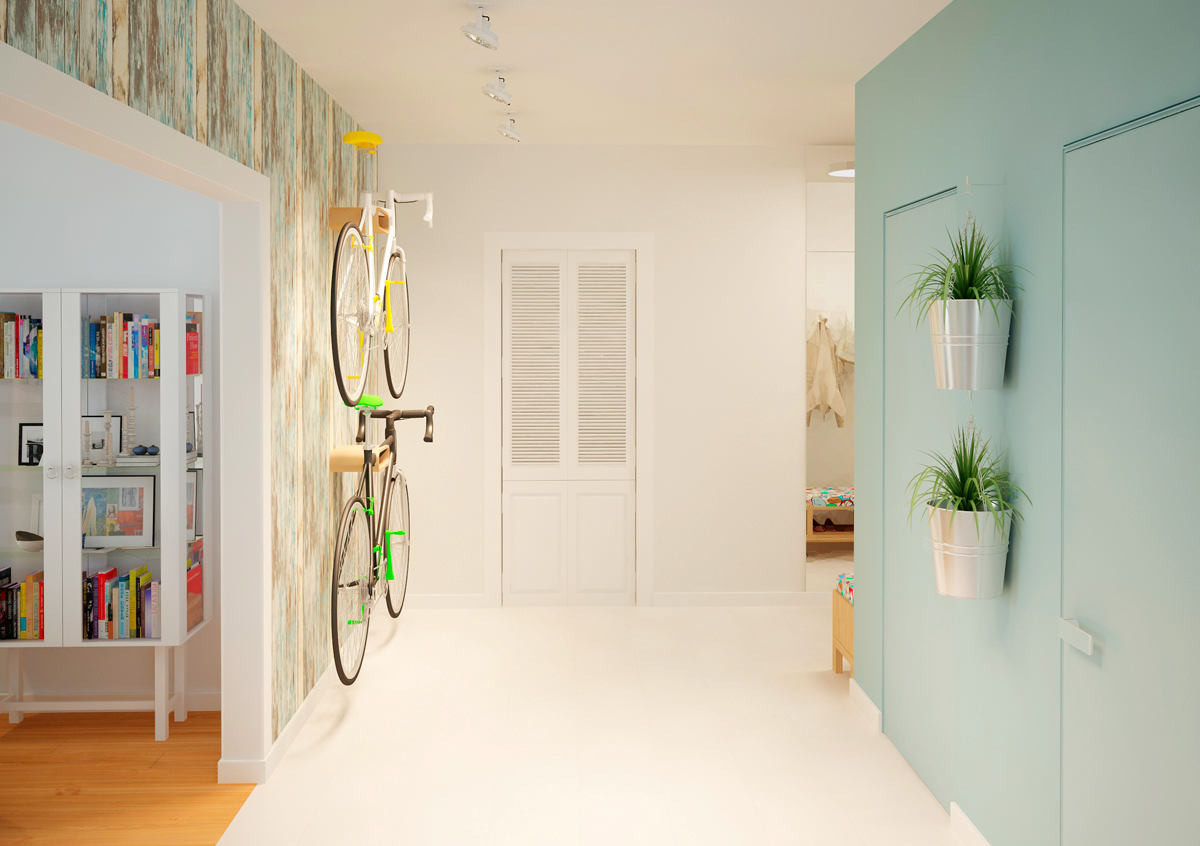 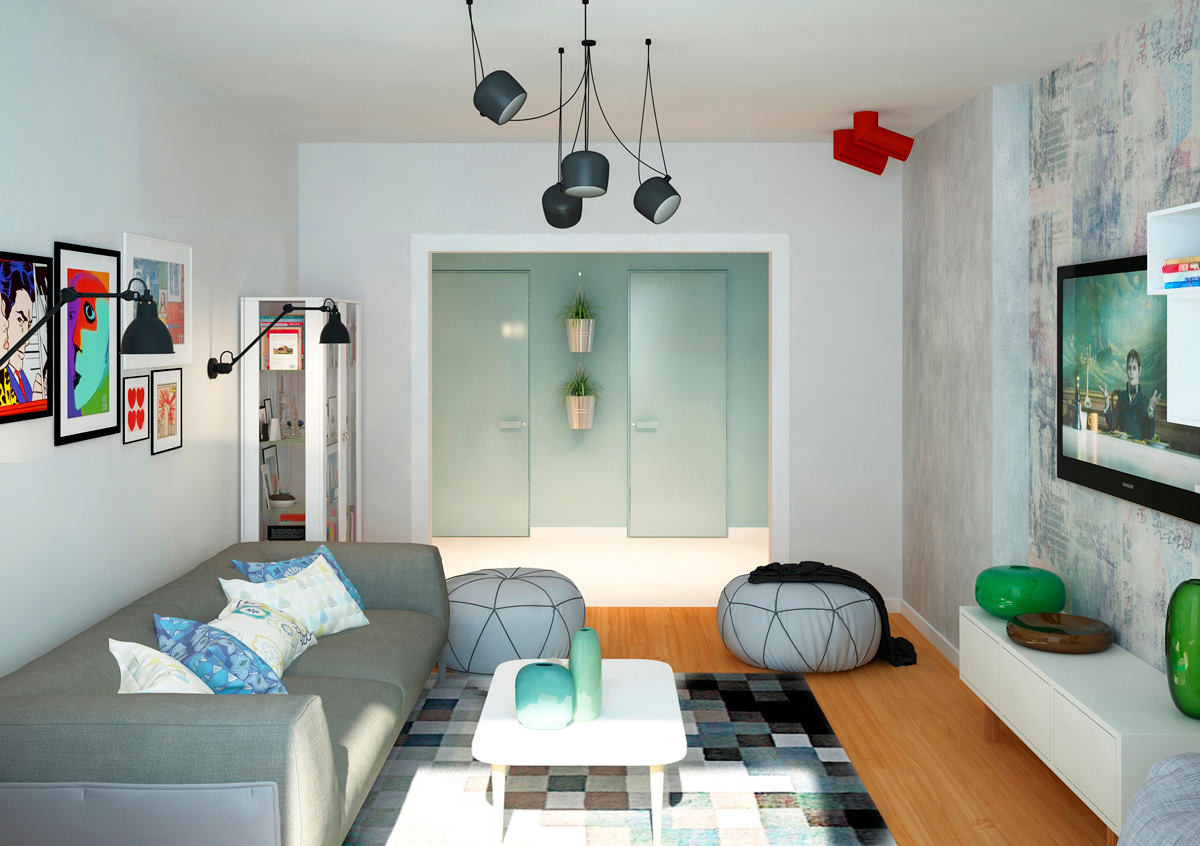 Balcony instead of cabinet

And why did not they touch the balcony? It turns out that this was one of the wishes of the customers. Since the owner of the apartment works in the field of IT-technologies, he has to work very concentrated. For him it was important that the workplace was isolated from the entire apartment and nothing distracted him from programming. Therefore, the Cabinet decided to equip it on the balcony, after having warmed it. 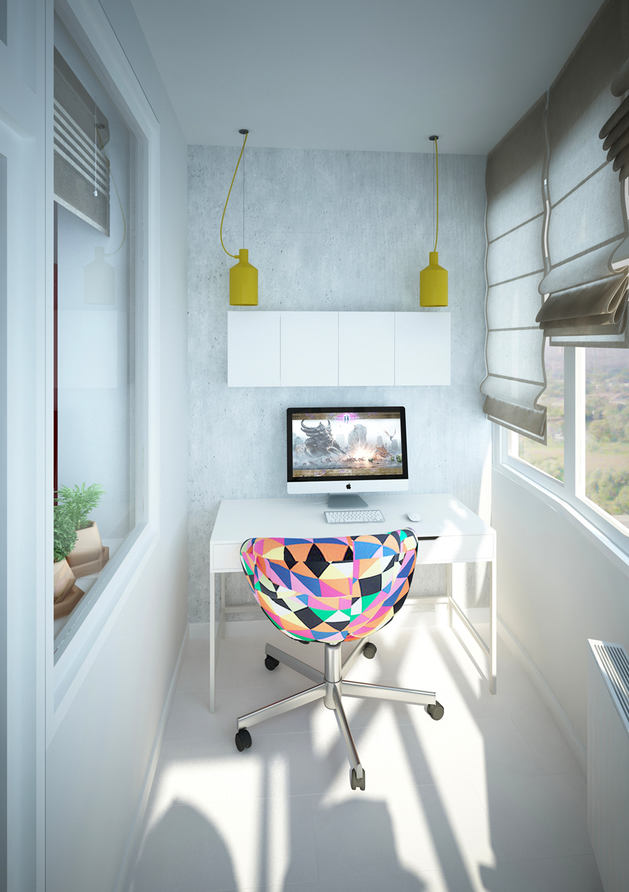 But the mistress's dream was redretro refrigerator, which became the main art object of the kitchen space. The kitchen itself, like the space of the entire apartment, is made in white colors. The kitchen apron was diluted with light crimson tiles. Denis Garbuzyuk and Nika Los, designers of the Mooseberry design group studio: - The main accent in the kitchen is a red retro refrigerator. Based on this, the furniture was selected in neutral shades so as not to distract attention from it. 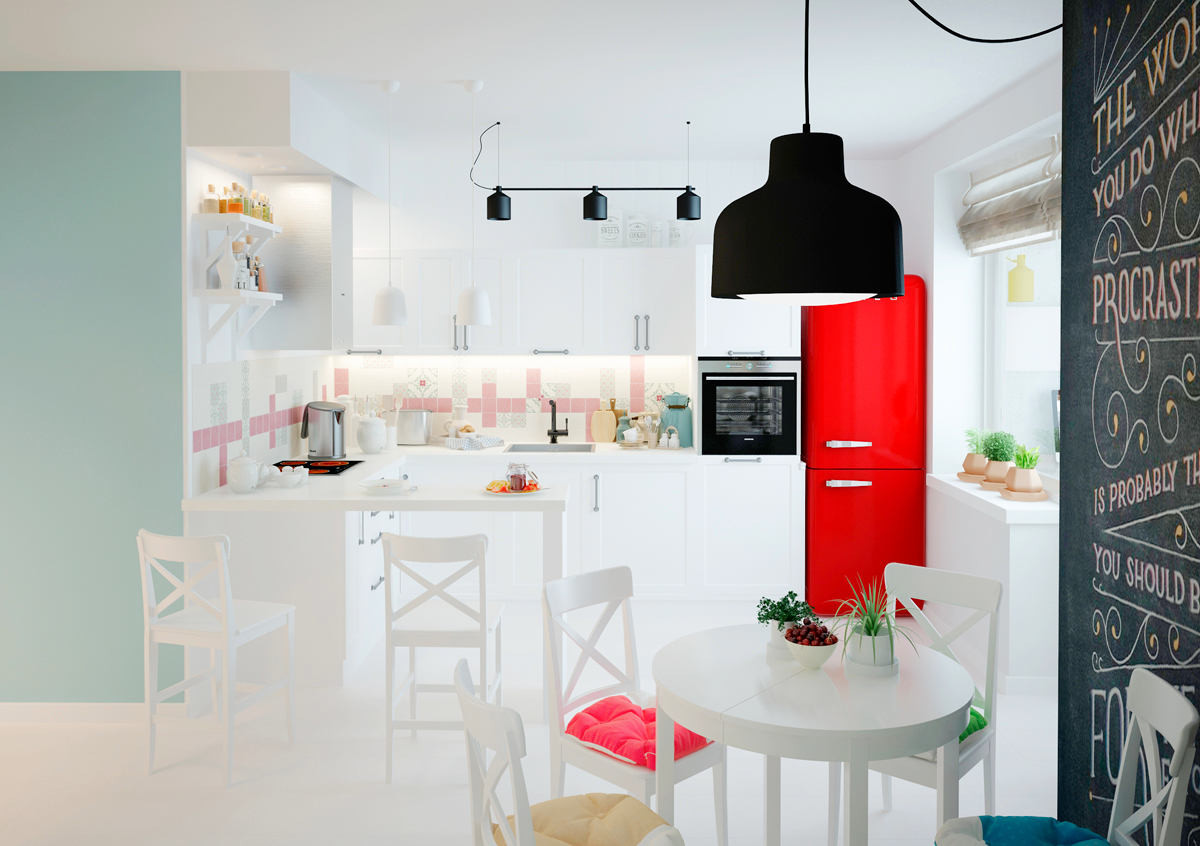 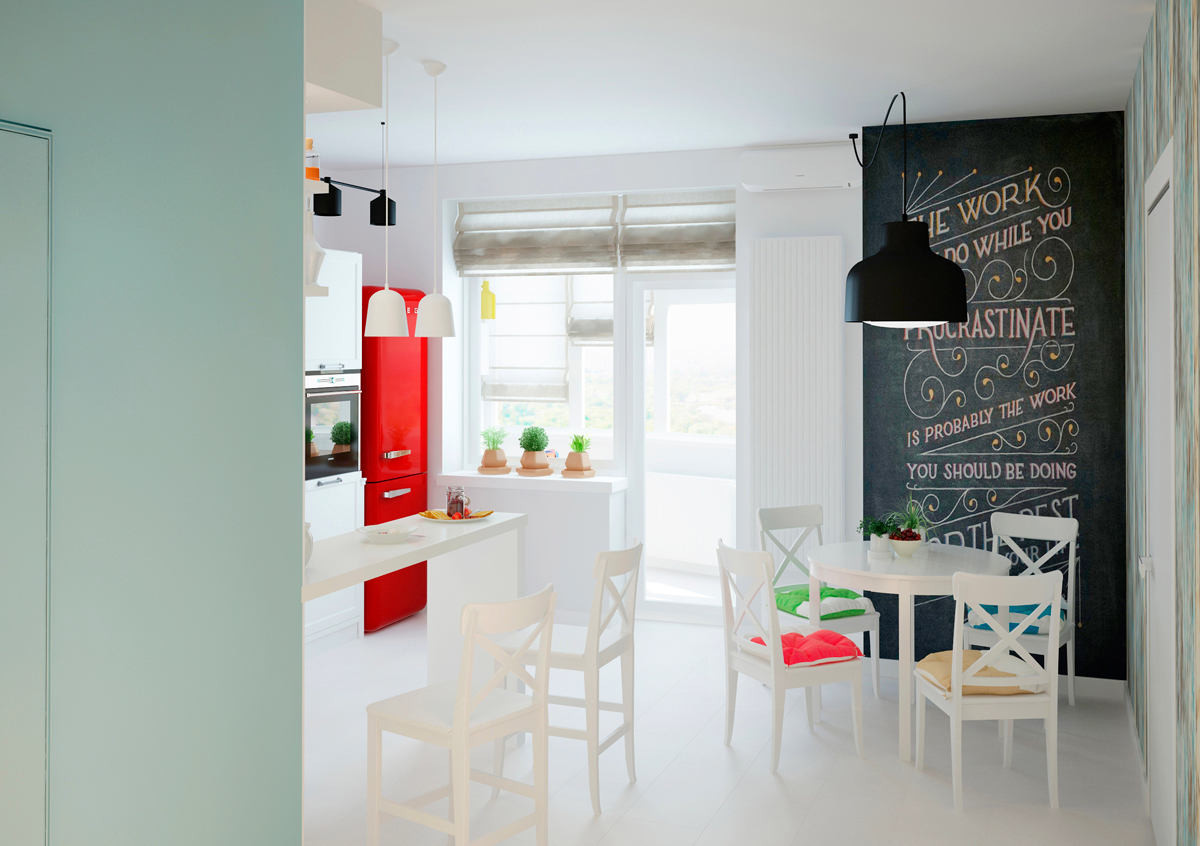 Bicycles on the walls

Since the owners of the apartment are crazy about cycling,Then the main question, which they asked themselves from the very beginning - where to hide mountain bikes. But the designers quickly came up with a stylish, practical and bold decision - not to hide the iron horses, but to put them on public display. To do this, they were fixed to the brackets right in the corridor. So, getting into the apartment, the first thing that guests see is two trendy mountain bikes. Color solution: quiet, but not boring

Vintage boards are a popular topic today andwidely used in the interior. The owners of the apartment also wanted to see such in their corridor. In order not to "steal" centimeters of space and not to spoil the walls with cladding, we decided to use a more budget option - vinyl wallpaper with the texture of the boards. Moreover, they ideally suited the idea of ​​bicycles - not all wallpapers can withstand mechanical stress when removing or securing vehicles. It was these "boards" that set the basic tone of the apartment. Denis Garbuzyuk and Nika Los, designers of the studio Mooseberry design group: - Opposite the wall with "boards", we decided to make a sky-blue wall and doors in it in the same tone. They left concrete pylons in the living room and "supported" them by placing a panel between them, which resembles a worn-out wall of an old apartment. The guys really liked the color scheme in the kitchen corridor, so they decided to apply this in the bedroom, diluting it with light furniture and bright accents. It turned out calmly and not boring. The bathroom is the only place where the guys clearly knew what kind of decoration they want to see it in, namely: tiles saturated with different colors with accent inserts, and they "got attached" to this concept. 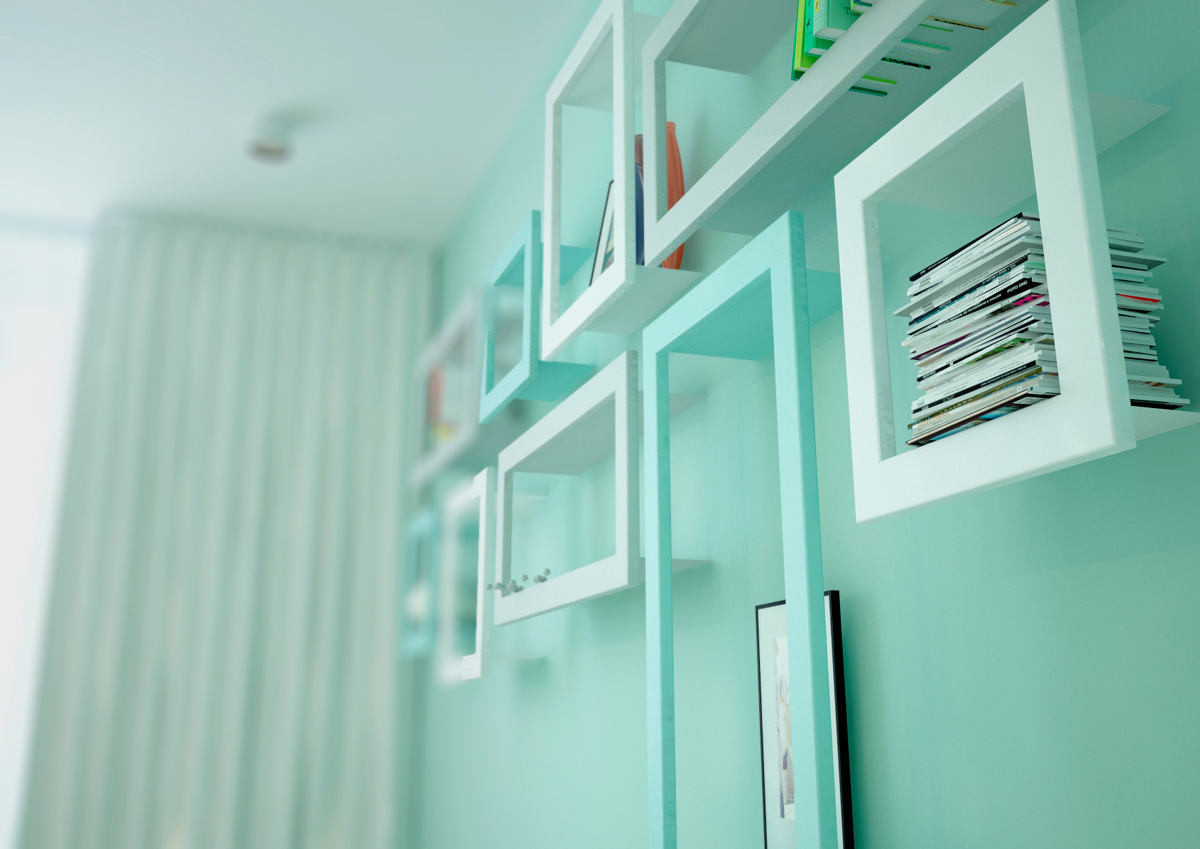 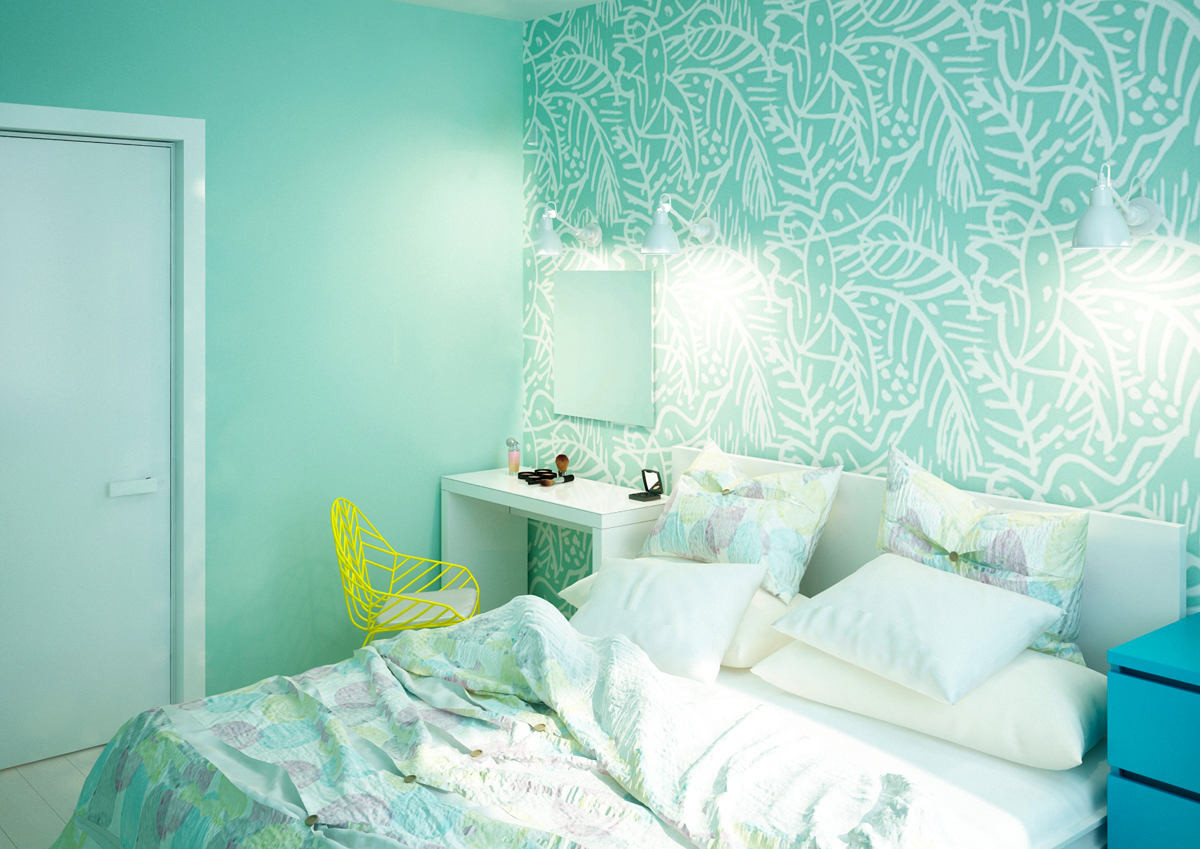 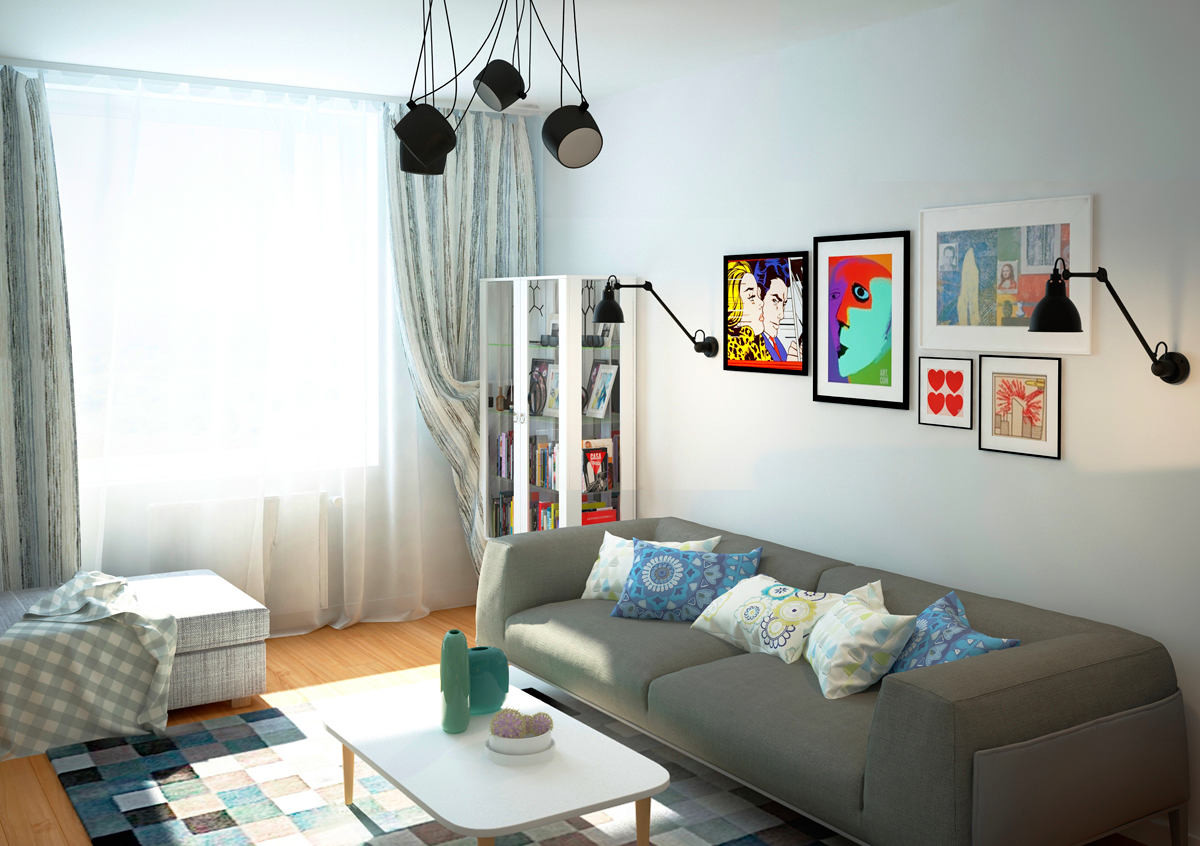 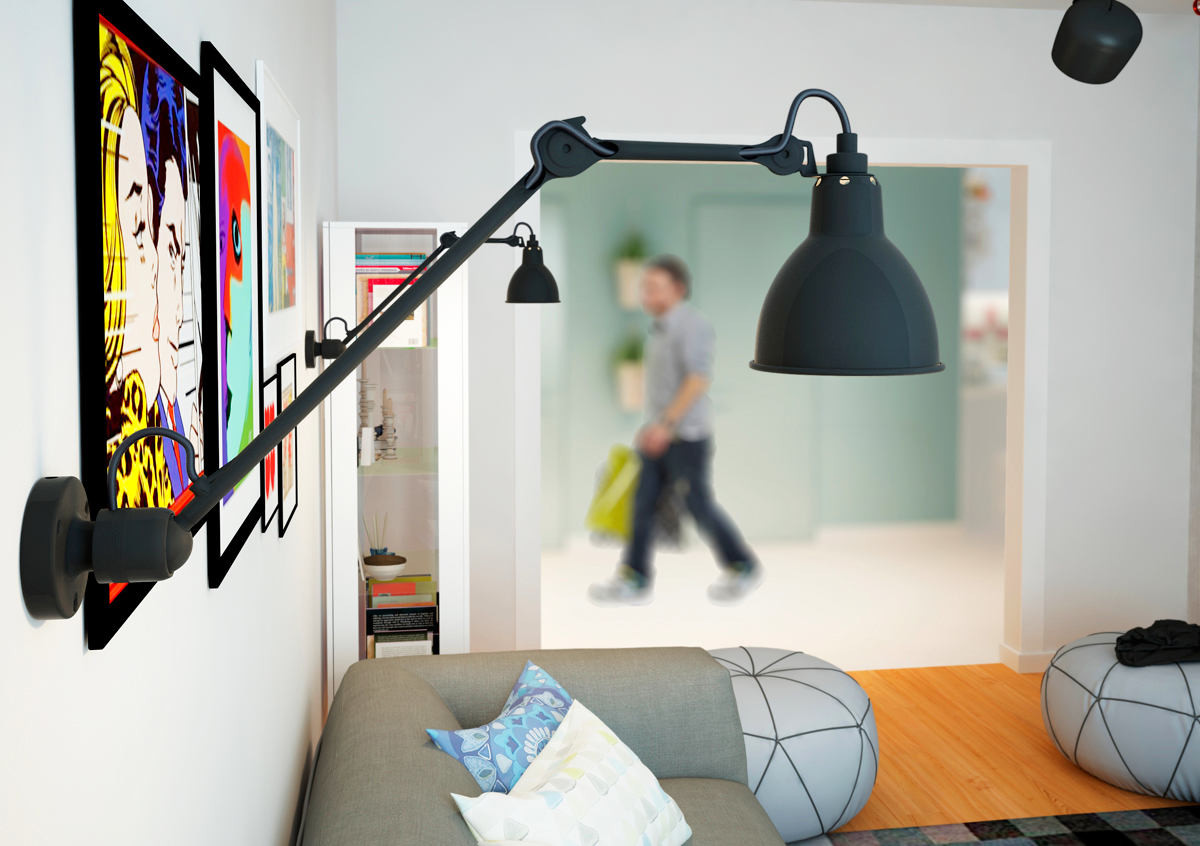 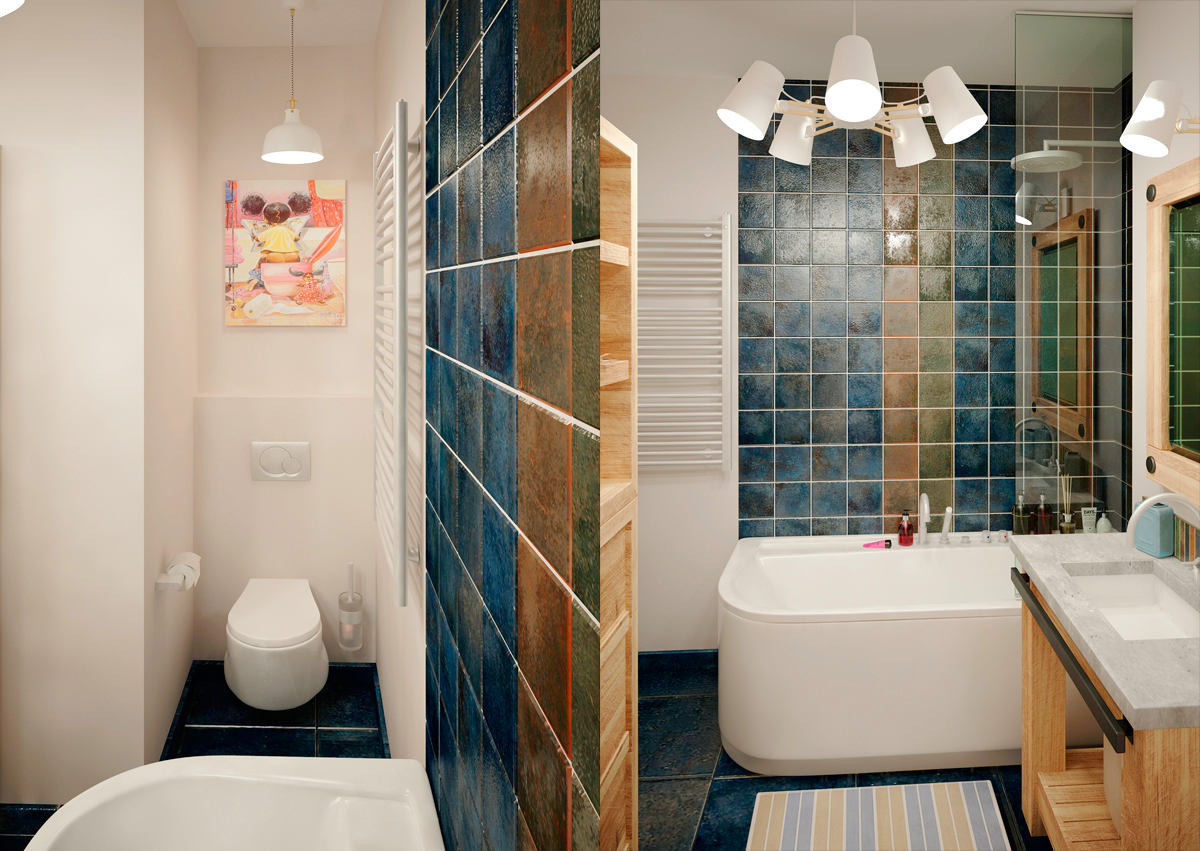 Tips for arranging such an interior from Mooseberry Design Group