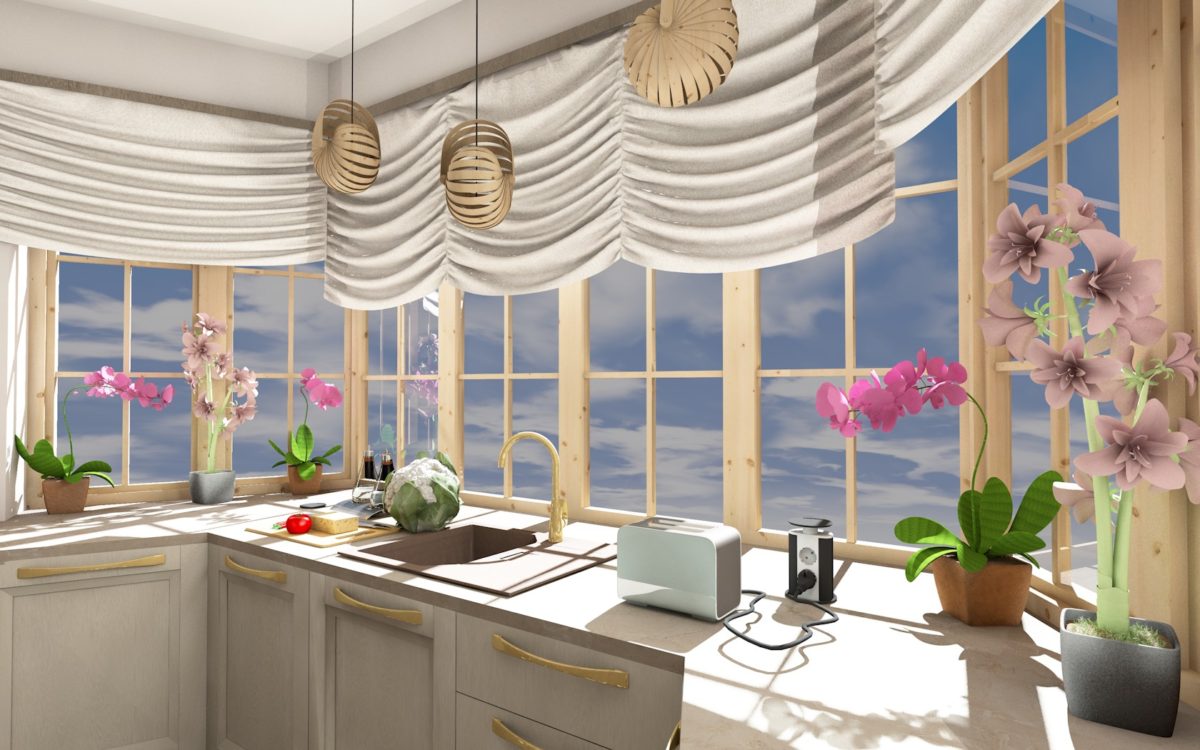 Three housewives, three generations, three views of life. Is it possible to create a space where everyone would be comfortable? The author of the project of this kitchen answers in the affirmative and even shares a recipe for success

One of the ideas that the author managed to translate intothis project is a link between generations. The youngest of the housewives just entered the institute, and the eldest was in her nineties. The retro-styled Smeg technique helped to beat the idea, which coexists with modern furnishings such as the Bubbles chandelier and repainted and aged chairs from IKEA. Irina Vasilieva, interior designer

- My first practical experience in qualityI got a designer working on a project for my house. In many ways, this determined my further approach to work - to create not just a beautiful picture, but a functional and individual environment for life. I believe that the interior is a reflection of a specific person, his inner world, hobbies, needs. Therefore, it is very important for me to understand my customer and be "on the same wavelength" with him. irinavasilyeva.pro

For me, every project that is being realized is a child. And I give each of them names. This kitchen was called "Sunset in a quiet harbor". The concept developed during the acquaintance with the family of customers.

Four women of different generations, whose fateSomehow connected with the sea. But when creating the design concept, it seemed to me right to leave the standard "marine" theme and link the theme of the sea with the image of the woman who was the keeper of the hearth and the source of harmony. So there was a color palette of the project - the main shade was red-orange, "whitewashed" to soft beige, symbolizing the rays of the setting sun, and accent - blue-green, the color of the sea blue. Together these two colors constitute a dyad. 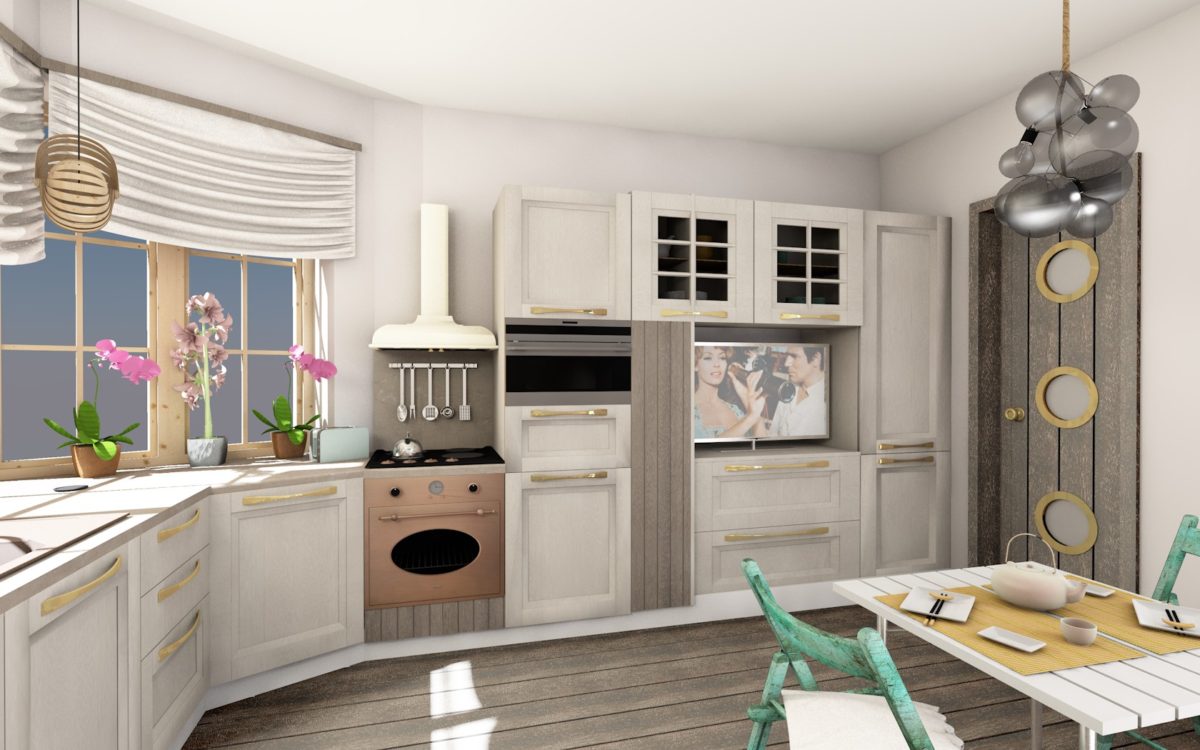 Initially, the task was - in the kitchen area of ​​13Meters and with a ceiling height of 2.6 meters to accommodate storage space, a working area, a dining area (in which four people could comfortably fit), it is absolutely essential to install a television set. At the same time, it was necessary to remember that there are three cats in the house who are used to always be near the hostesses.

The working zone was decided to be placed in a bay window by the window. So, according to the idea, it became a symbol of the captain's bridge of the ship, at the helm of which stands a woman. Sockets for small household appliances made hidden, integrated into the countertop. The main storage areas are the lockers under the working area, as well as the cabinets to the right of the entrance.

The dining area is located to the left of the entrance, and opposite to it there is a TV set - so that the family can dine while watching their favorite films. 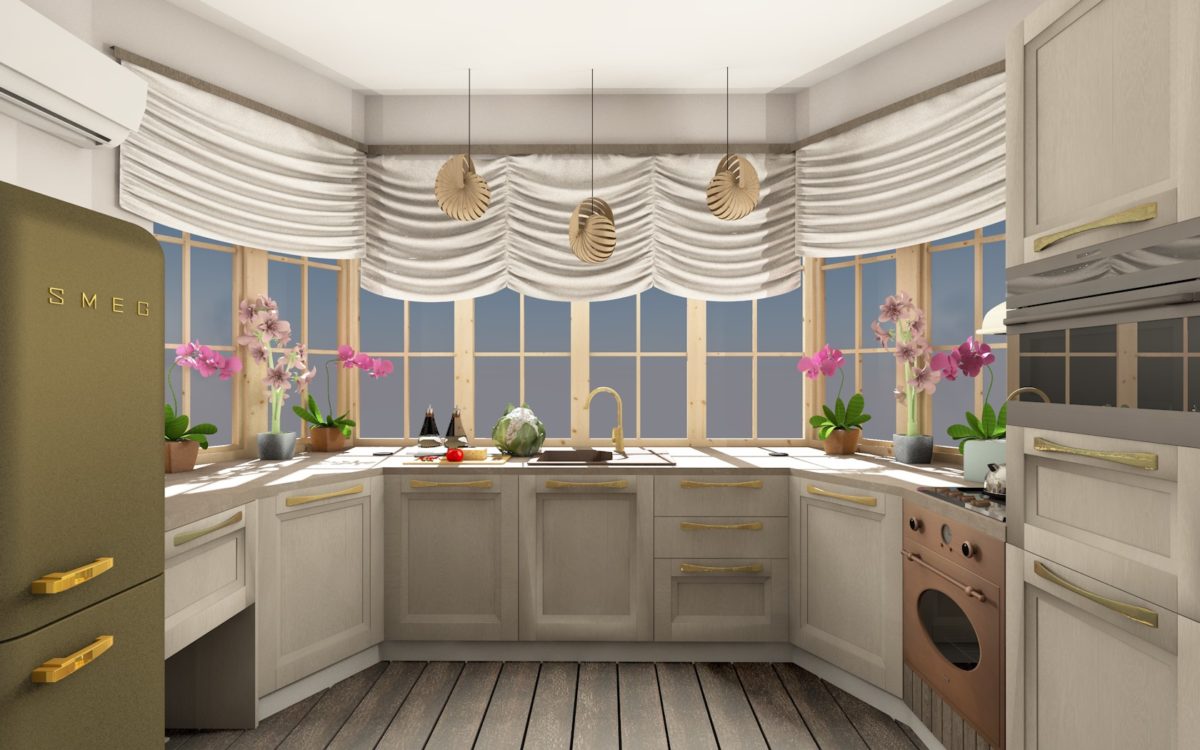 Do not forget about the cats - on the left under the working area, under the table top, allocated a place for their feeding so that they do not interfere with the passage. And above - a box for storing feed.

With cats is also the fact that many itemsInterior made to order. For example, a sofa from a pallet. Under the seat space is designed, which can be used either to store items (books, magazines), or to place cat lounges. A coffee table, made of a building coil, is a hybrid table and nails. The rope, with which the leg is covered, can be replaced with wear. And, of course, the regiment-mast rises above the sofa! Textiles also emphasize the theme of the sea. The folds of the Roman curtains hanging over the "captain's bridge" resemble stretched sails, the colors of the pillows refresh the sea breeze.

For a floor the massive floor board, a deck layout is chosen.

The door was also an interesting object.Made of the same material as the floor, the door seems to grow out of it. The door windows are made in the form of portholes. The roman shades that frame the window are reminiscent of sails, while the Nautilus pendant lights further emphasize the connection to the sea.