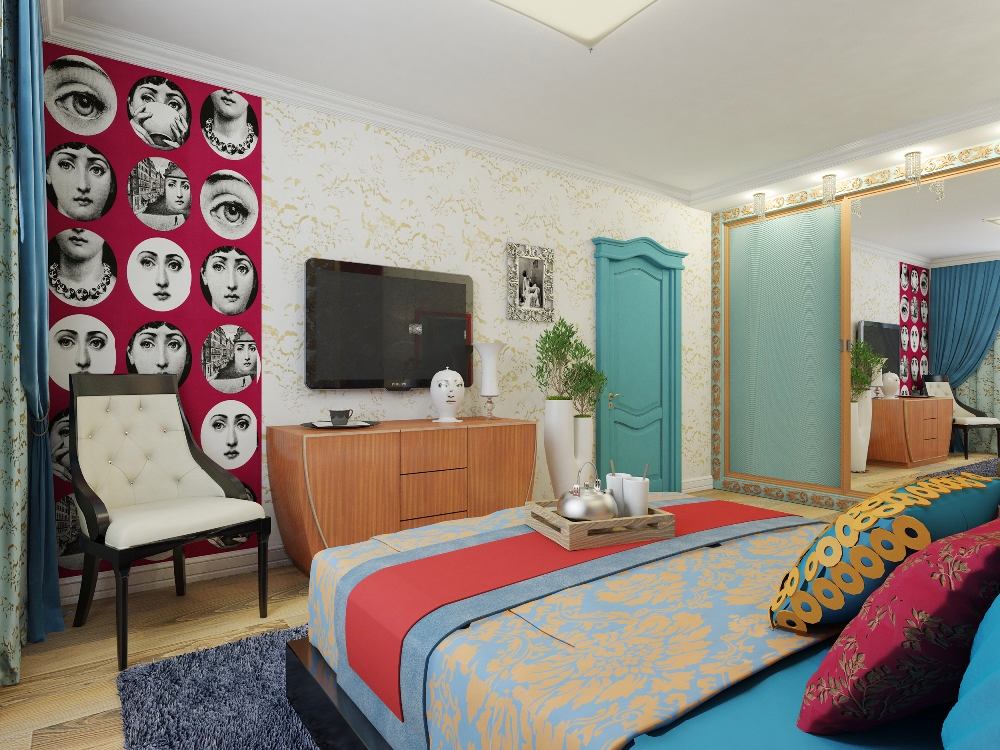 Dedicated to fans of eclecticism.Moorish arches, the African desert, the famous face of Lina Cavalieri, red arched openings, turquoise doors - and all this in a typical, but definitely atypical Moscow apartment. A professional designer must be able to satisfy all the client's requirements. However, what if the customer does not have a clear idea of ​​the interior style? What if all his wishes are blurry and contradictory? How to combine the incompatible, create an original, harmonious and positive interior that reflects the inner world of its inhabitants? According to Elena Bulagina, the leading architect-designer of the Kapitel architectural bureau, the answer to all these questions is one word -. Elena Bulagina, architect Leading architect-designer of the Kapitel architectural bureau. Graduate of the Samara State University of Architecture and Civil Engineering (Faculty of Architecture). Author of numerous projects for residential and public premises. Elena's works have been published in prestigious publications: "Redevelopment", "Beautiful Apartments", "Ideas for Your Home", "Best Interiors". The inhabitants of this typical Moscow three-ruble note are a married couple and their student son. The head of the family, by occupation, often travels abroad. Inspired by the spirit of travel and imbued with the charm of the Arab countries, he, in turn, instilled a love of the culture of the Middle East in his wife and son. Therefore, thinking about the interior of a dream, the family imagined a bright, boring space in which oriental motives are intertwined with modern elements. At the same time, the landlady of the apartment turned out to be partial to such styles as Empire and Art Deco. And the son wished that the design of his room was distinguished by restraint and functionality. Oddly enough, but it was this whole mix of contrasts and contradictions that subsequently became the basis for a harmonious and original interior. 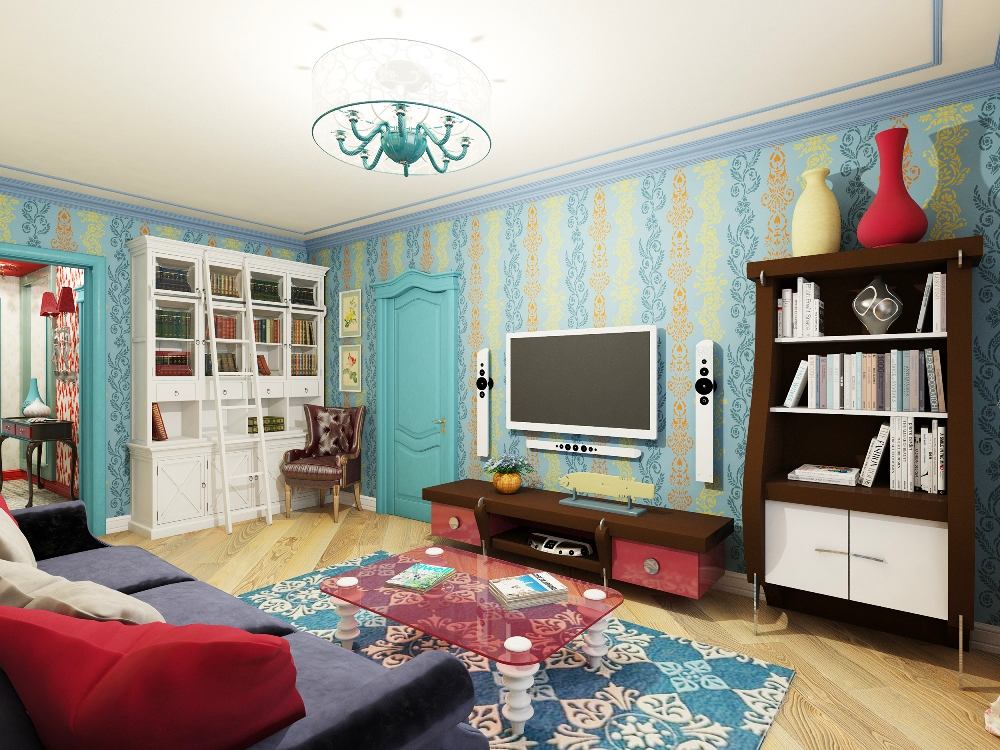 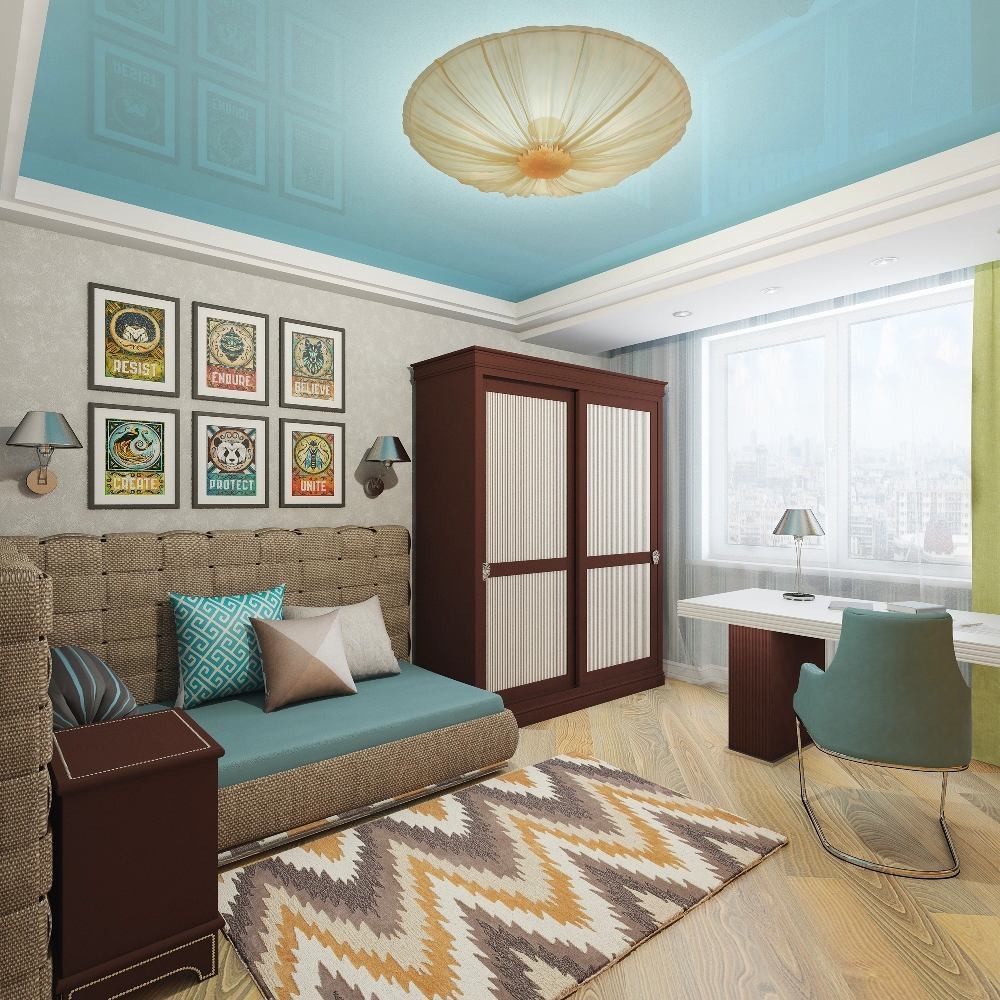 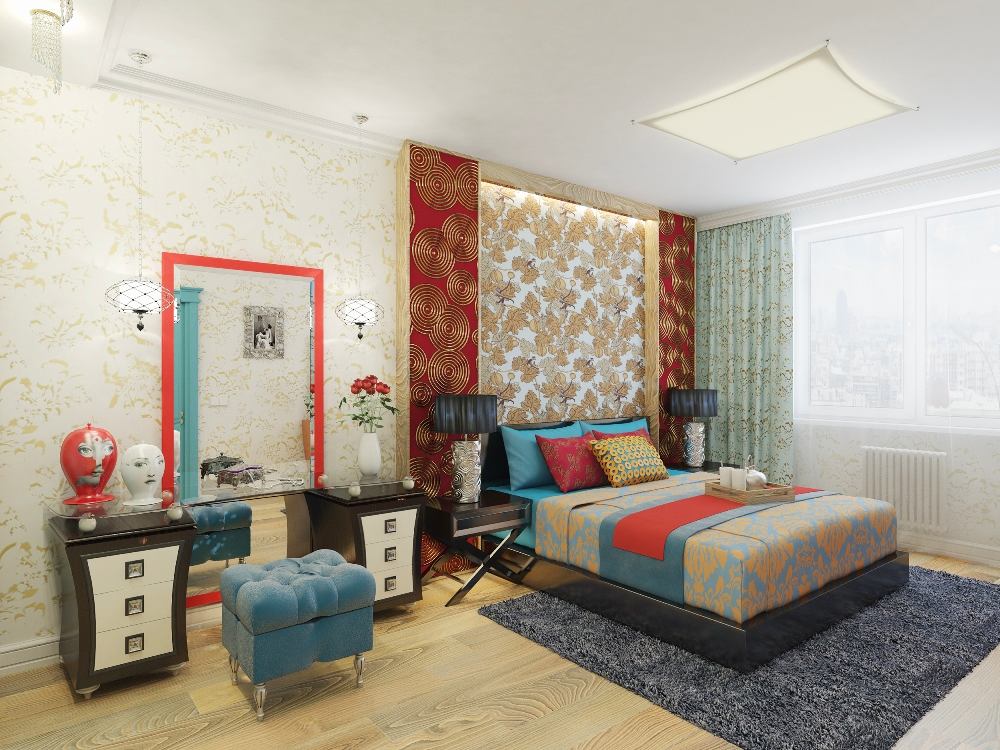 For help in the implementation of their interiorthe customers turned to the Kapitel architectural bureau - and did not regret it. Architect-designer Elena Bulagina found a way to fulfill the wishes of all family members and created an extraordinary interior kaleidoscope in an eclectic style, which filled the space with exotic flavor and positive mood. Moreover, the author of the project managed to optimize the basic typical layout of the apartment without affecting the main walls. The dismantling of the partition between the living area and the hall increased the area of ​​the smaller bedroom from 11.4 to 19.7 square meters. This planning solution made it possible to turn the smallest room into a living room, and the room located closest to the front door was taken under the son's bedroom. Clever! Student parties end late, which means that the shorter the distance from the entrance to the apartment to your own room, the less the risk of waking up the parents. Elena Bulagina, architect-designer: - If the customers do not have a clearly expressed idea of ​​the interior style, the best solution would be to turn to eclecticism. It allows you to use a mix of different styles, to build an individual interior that is maximally focused on the preferences of customers and their ideas about the ideal space. The clear contours of established interior styles are blurred and something new, graceful, beautiful and positive is obtained. pro-kapitel.ru 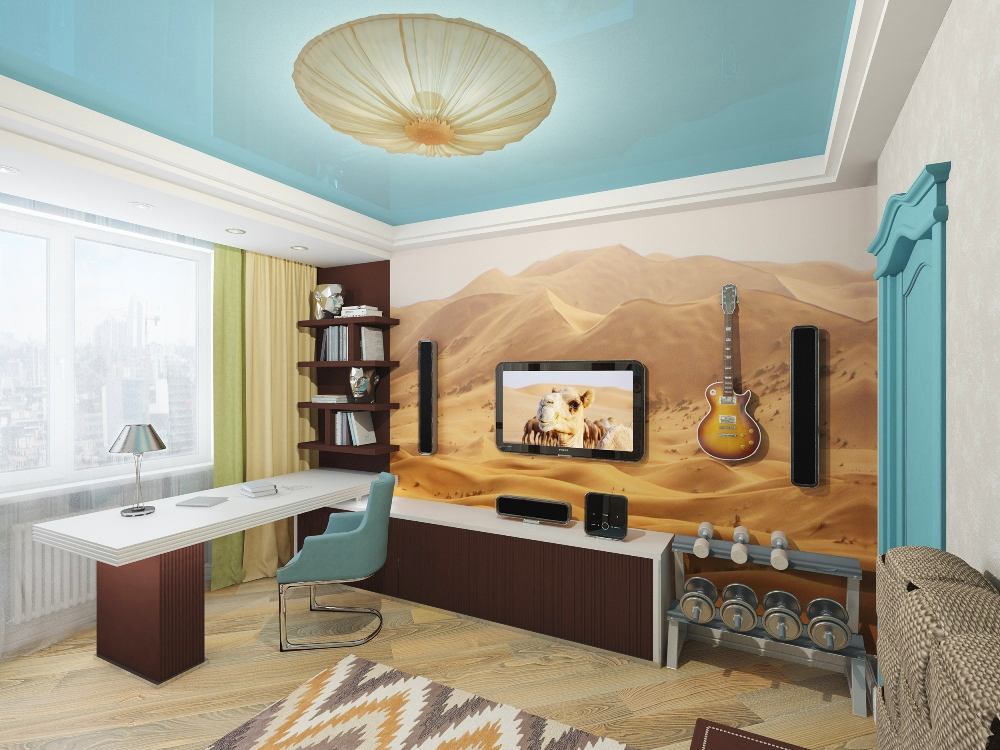 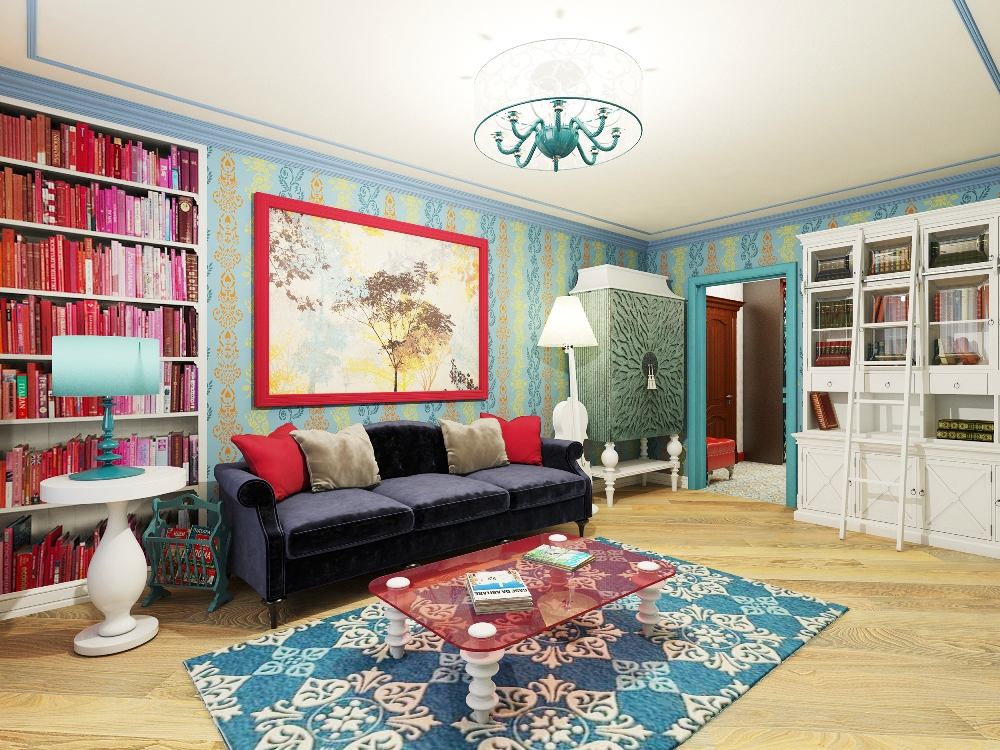 To create a positive mood, ElenaBulagina used bold active colors for interior decoration: red, blue, yellow. However, she managed to avoid the shock effect by balancing them with white, as well as turquoise, beige and golden shades. You will find an example of another successful use of active colors in the interior. During trips abroad, the head of the family liked oriental patterns. Therefore, the floors in the kitchen are decorated with an ornament reminiscent of Arabic script, and the original arch, which replaced the door, is made in the Moorish style and painted in a catchy red color. It is supported by an equally noticeable red baseboard. The contouring of vaults and columns with capitals also emphasizes the thematic mood of the interior and creates a fashionable contrasting wall effect. However, this contrast is not traditional bright, but on the contrary - muted, softening the riot of the surrounding color palette. The bathroom, combined with a toilet, continues to demonstrate non-standard shade combinations. Here turquoise harmoniously coexists with shades of brown and yellow, creating the association of an oasis in the Arabian desert. The hidden functionalism of the room is not immediately evident. In a special niche there is a place for a large-sized washing machine and utility shelves, skillfully disguised with decorative blinds. 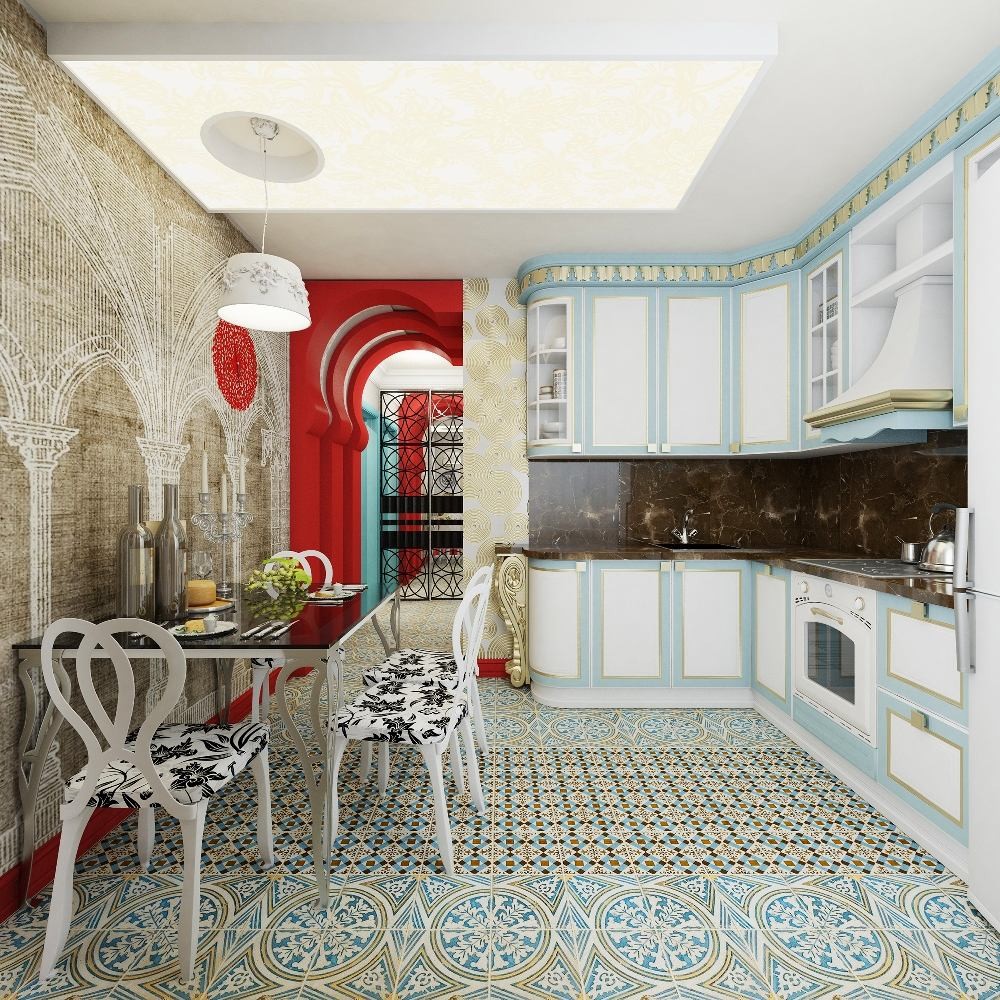 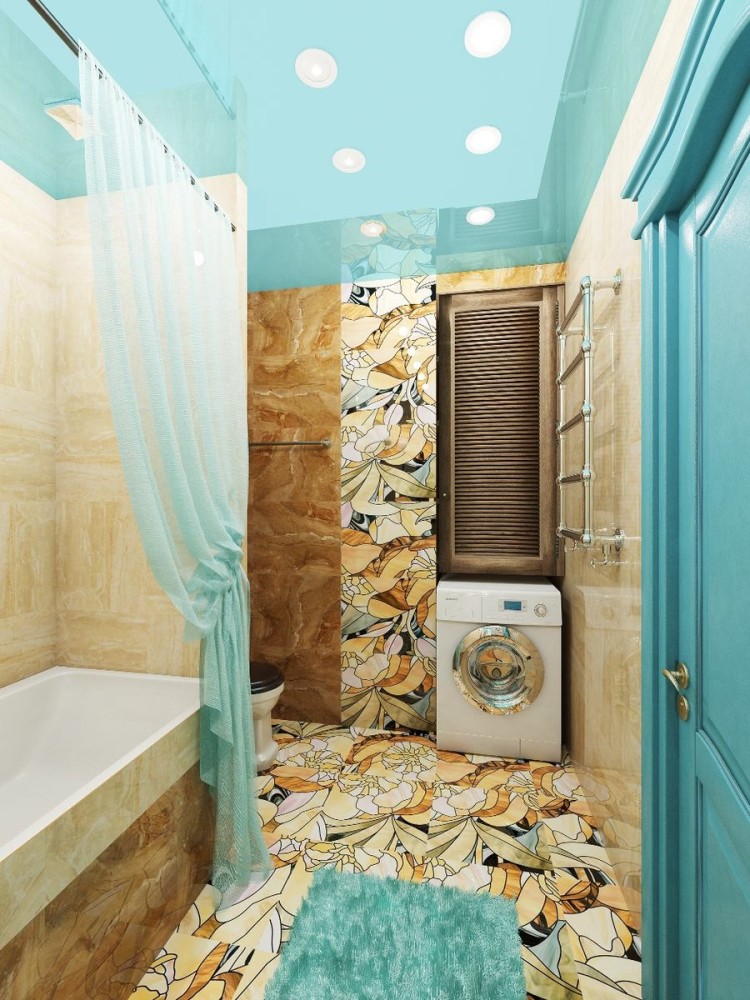 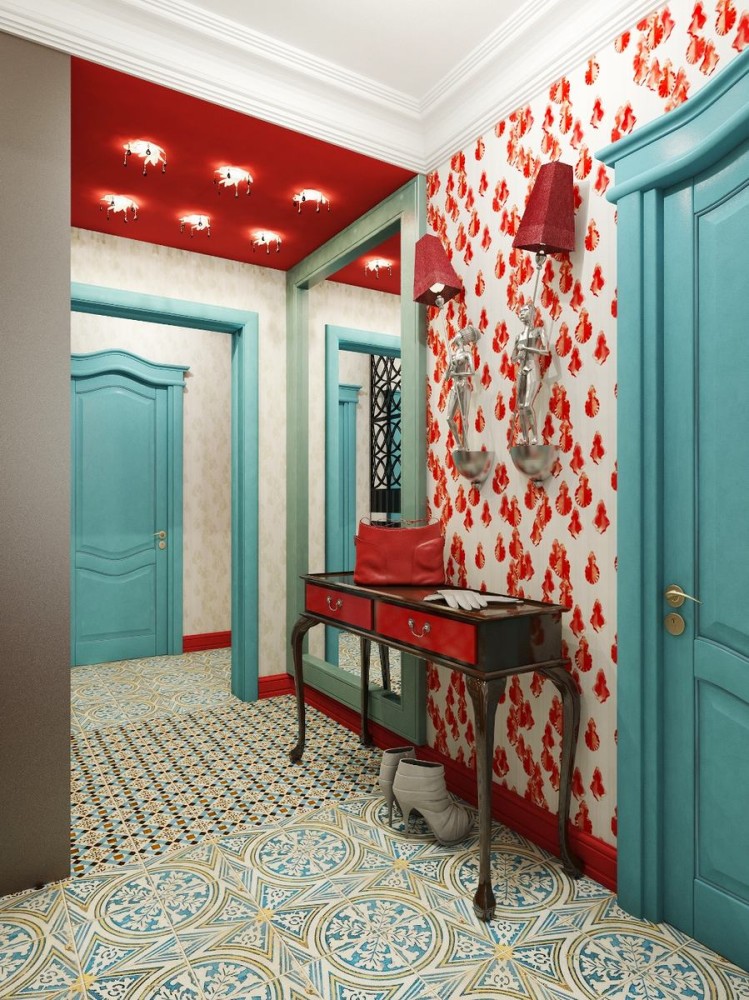 The son's bedroom, unlike other rooms,decorated in calm neutral colors. Ceiling drops with built-in lights emphasize the contours of the room, and a glossy insert (stretch ceiling) increases the vertical space of the room. The cool color of the ceiling, as conceived by the author, should evoke associations with the clear blue sky stretching over the desert. All rooms are furnished with vintage furniture, lamps, textiles and accessories in oriental and classical styles that satisfy the tastes of both spouses. A floor lamp in the form of a cello catches the eye in the living room, which was not here by chance. It is a reminder of the hostess's youth, dedicated to playing this musical instrument. They are actively used in the design of the walls, for example, in the master bedroom you can see four of their varieties at once. In his son's bedroom, there is a photo wallpaper depicting the desert, which he fell in love with while traveling with friends to Mongolia. This detail also acts as a link between the style of the room and the general idea of ​​the interior of the apartment. In the kitchen, the wallpaper depicts a stylized arcade, whose ornate design intertwines with the intricate pattern of floor mosaics. Long and deep wardrobes, which are equipped in the corridor and in both bedrooms, are responsible for the functional component of the interior. 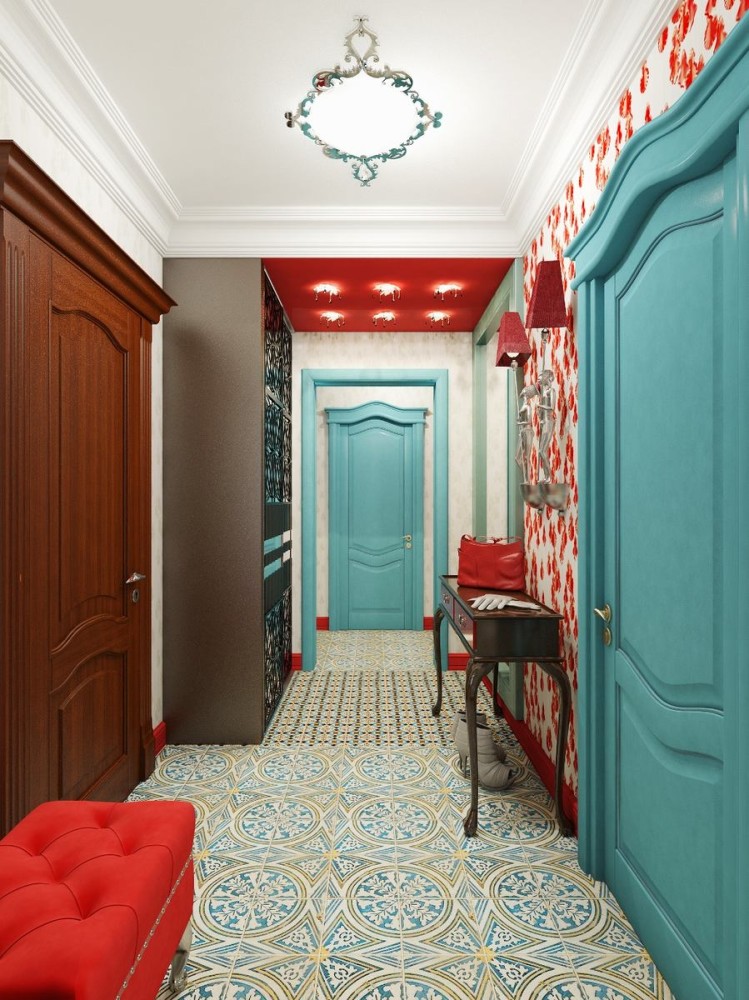 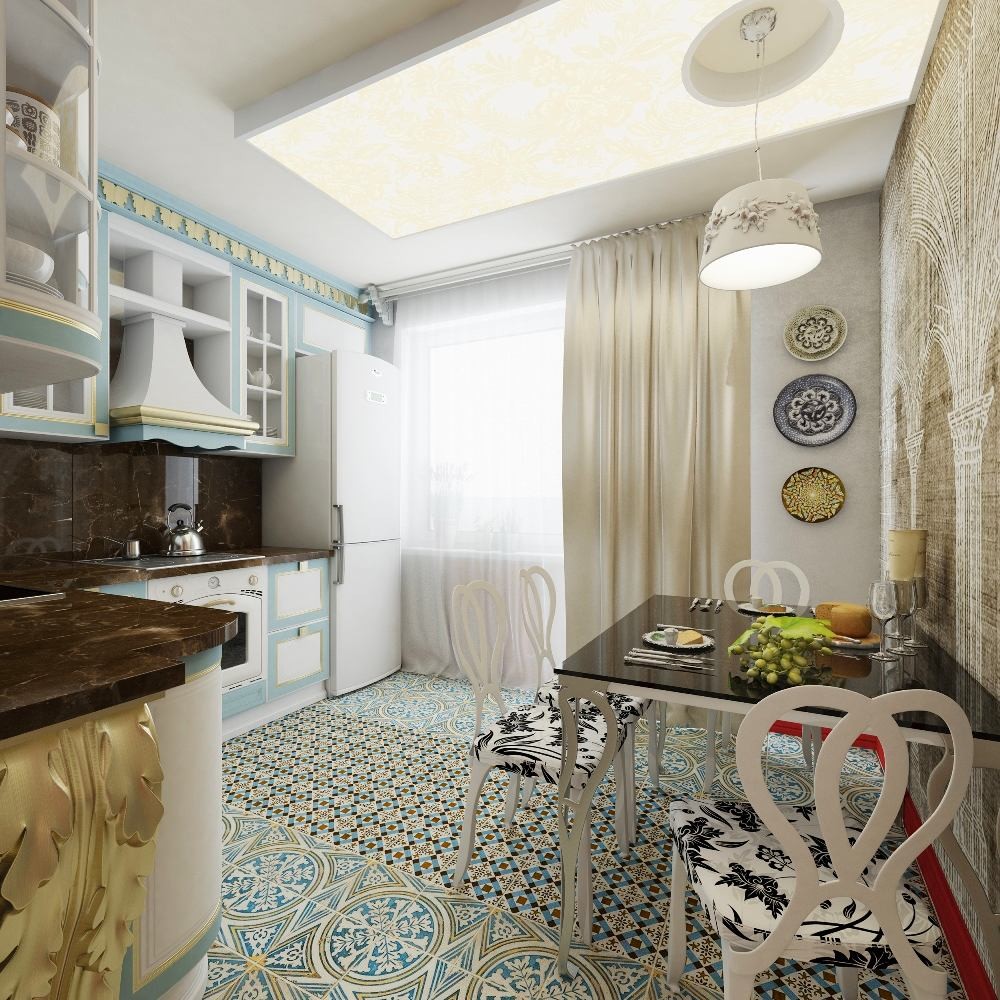 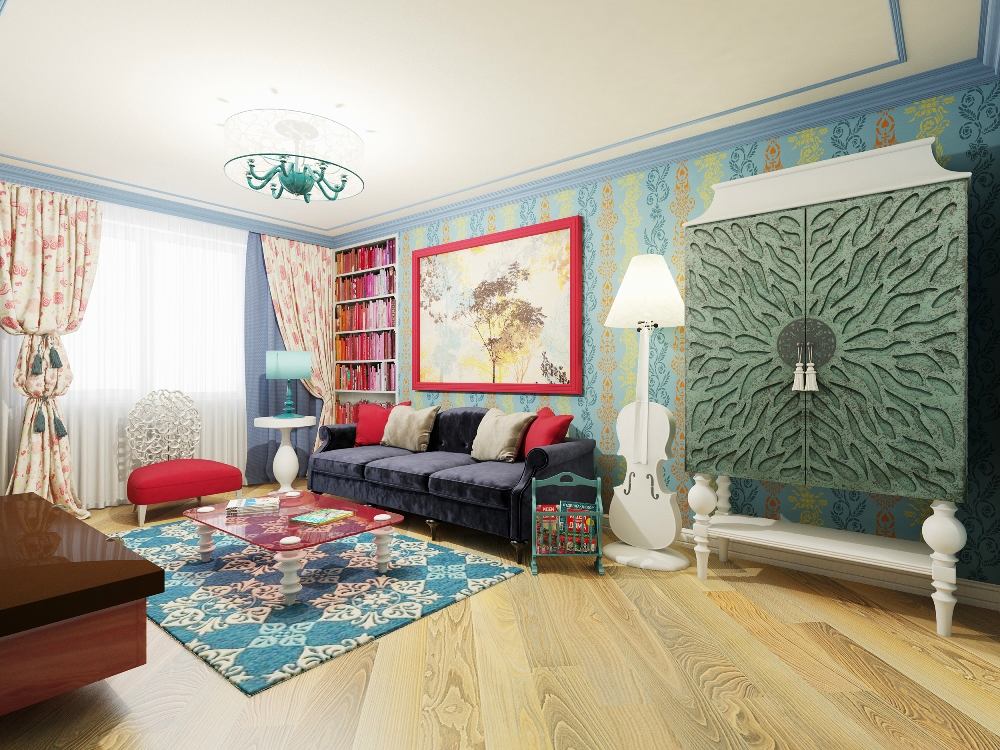 In the interior were used: