You will not find behind the doors of this Moscow stalinkaneither a bohemian loft, nor a modern Scandinavian interior - a three-room apartment for a man who appreciates austerity and simplicity, designer Kira Shelmanova designed the style of "Stalinist Empire", which is rare today. The house in which the apartment of our today's hero is located was built in 1940 according to an individual project and belongs to the category of the famous "Stalin". The author of the project, designer Kira Shelmanova decided not to ignore the historical component and specific architecture of the building, but, on the contrary, to emphasize the interior in the “Stalinist Empire” style and domestic furniture. The owner of the apartment, a middle-aged man with a conservative outlook on life, an adherent of strict forms and understandable solutions, fully approved this choice. Kira Shelmanova, architect-designer A graduate of the Moscow Architectural Institute, a member of the Union of Artists of Russia. Since 1996, he has been the founder, head and chief architect of projects of his own bureau called "Kira Shelmanova's Bureau", specializing in private interiors. In his work, he tries to adhere to three main principles: benefit, strength and beauty. Kira's bureau team consists of several people, and designer Margarita Medvedkova is a long-term partner in her projects. shelmanova.ru Initially, there were four living rooms, but such a number was irrelevant for the customer, so he instructed the designer to make redevelopment in favor of rational use of space and ergonomics of the interior. As a result, the apartment has three living rooms (bedroom, study, living room), kitchen-dining room, dressing room and laundry room, and the area of ​​the bathroom has also increased. The style of "Stalin's Empire" is directly related toPlanning and architecture of houses of the period of 20-30-ies. Among its main features are high ceilings and windows, 4-5 rooms in the apartment and, as a rule, a small kitchen. All this was found in our project, and the height of the ceilings as the main advantage of the apartment designer tried to save as much as possible. 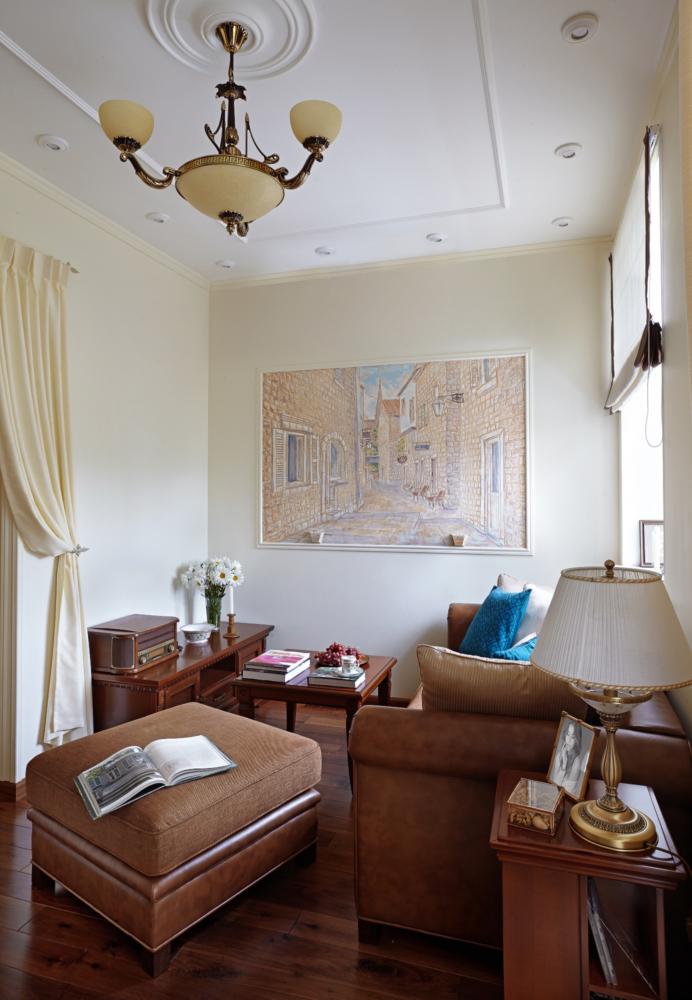 In the living room, kitchen-dining room and bedroom, a rather complicated scenario of built-in lighting was used, for implementation of which it was necessary to use a two-level suspended ceiling system from the GKL. All furniture has been matched with vanilla enamel: this shade reduces the contrast with the finishes and textiles and creates a more intimate and relaxed atmosphere that sets you up for relaxation. In the office area of ​​16 square. M placed a sofa band, a fireplace from the salon "The Art of Fire" with a TV above it, storage cabinets and a workstation by the window. In the bathroom and the bathroom installed tensionCeilings, as they provide the greatest protection against leaks, which is extremely important for homes with old communications. The designer chosen for the entire interior stylistics continued, using ceramic granite and ceramic tiles in natural shades in the finish.

Kira Shelmanova, architect-designer:“As a result, the overall layout of the apartment has become more functional, comfortable and spacious. It seems to me that we managed to harmoniously combine the external appearance of the house and the internal content in a single style, without pretentiousness and cliches. The main requirement of the customer was also fulfilled - to stay within the established budget. In this interior were used: