In this interior, two eras met andsome very daring modern tricks. Thanks to the perseverance of the designer and the trust of the customers, in a small area, it was possible to create a comfortable space for the life of two generations of the family. Interior designer Olga Ievleva was able to reflect these preferences in a calm, pro-classical and at the same time quite original project. Olga Ievleva, interior designer, co-owner of More Decore bureau Olga mastered four professions, including art historian, fashion designer and, of course, interior designer. At various times she was engaged in scientific and editorial activities. However, she was finally able to “find herself” in design interiors.

The smallest room in the apartment was combinedWith a corridor, and the wall and doorway that connected the two rooms were demolished. Instead, a wall with a wide opening was erected. Now this small room serves as a living room, there is a sofa, built-in light yellow wardrobe and TV. 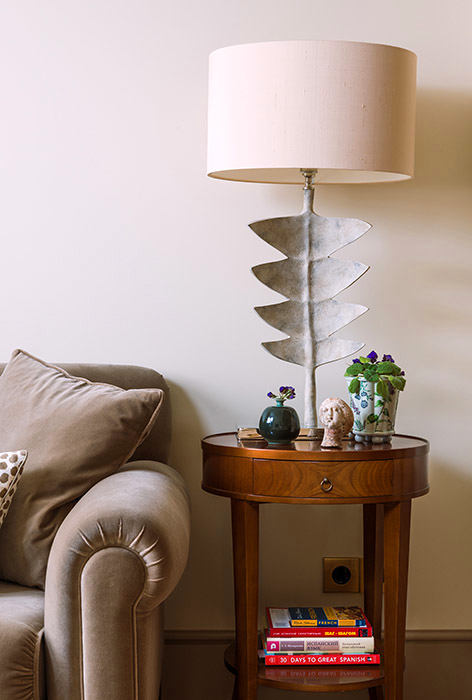 In addition, the corridor was slightly narrowed, whichLed to the kitchen. There were also entrances to two tiny bathrooms (bathroom + toilet). They were united and expanded due to the corridor. Opposite the entrance, another wall with an opening was erected. With her help it was possible to separate a small corridor at the entrance from the corridor connected to the living room. The interior was born gradually. According to the author, those collages that were made during the design, have changed a lot, although the general idea has remained. The apartment was not the same in style. And it is more a fusion of classics and modern minimalism. The bedroom, or rather, the cabinet of the hostess's son -More modern space, such was the desire of the customer. Of course, in one apartment there can not be a classical living room and a modern bedroom. Therefore, the designer had to combine the premises with furniture. For example, a small armchair with a capitone was placed in the office: on the one hand it is a tribute to the classical tradition, on the other hand - a cabinet next to quite strict, modern facades. Lamps in this interior play a unifyingrole. In the living room - the dazzling lamps of the Porta Romana factory, more like a sculpture than a traditional table lamp; Sconces "with muzzles" in the office are also a bit confusing. The light in the living room and study is the already mentioned Porta Romana, a beautiful English factory. Ceiling lamp in the kitchen - the famous Danish factory Louis Poulsen, also a splash of modern design in a classic theme. Chandelier for the bedroom mistress had to paint. Originally, a chrome lamp was purchased, but it quickly became clear that it did not fit. The designer personally covered the metal tubes with "gold" sheets. The palette in this interior is calm,Pacifying, in vivid detail, the landlady did not feel the need. Most of the furniture was made to order by the Moscow cabinetmakers - a built-in wardrobe in the living room (its color coincides with the color of the walls), the shade of the wooden countertop was chosen according to the color of the Morelato factory nightstands. The wardrobe in the hallway was made according to wishesCustomers. The presence of a shop was one of the conditions. On the inner right wall is a secret door, behind which a plastic electric shield hides, according to the designer's deep conviction, such things should always be hidden in carpentry. The author planned the kitchen together with the hostess. The customer was important to get a lot of work surfaces. But the designer wanted to arrange the sink opposite the window, and it was supported. The shop was made to order under the color of the kitchen after the table top had risen. Unusual for our spaces, the tonal solution of the kitchen itself almost coincides with the color of the doors and cashings - this idea was liked by both the designer and the hostess.