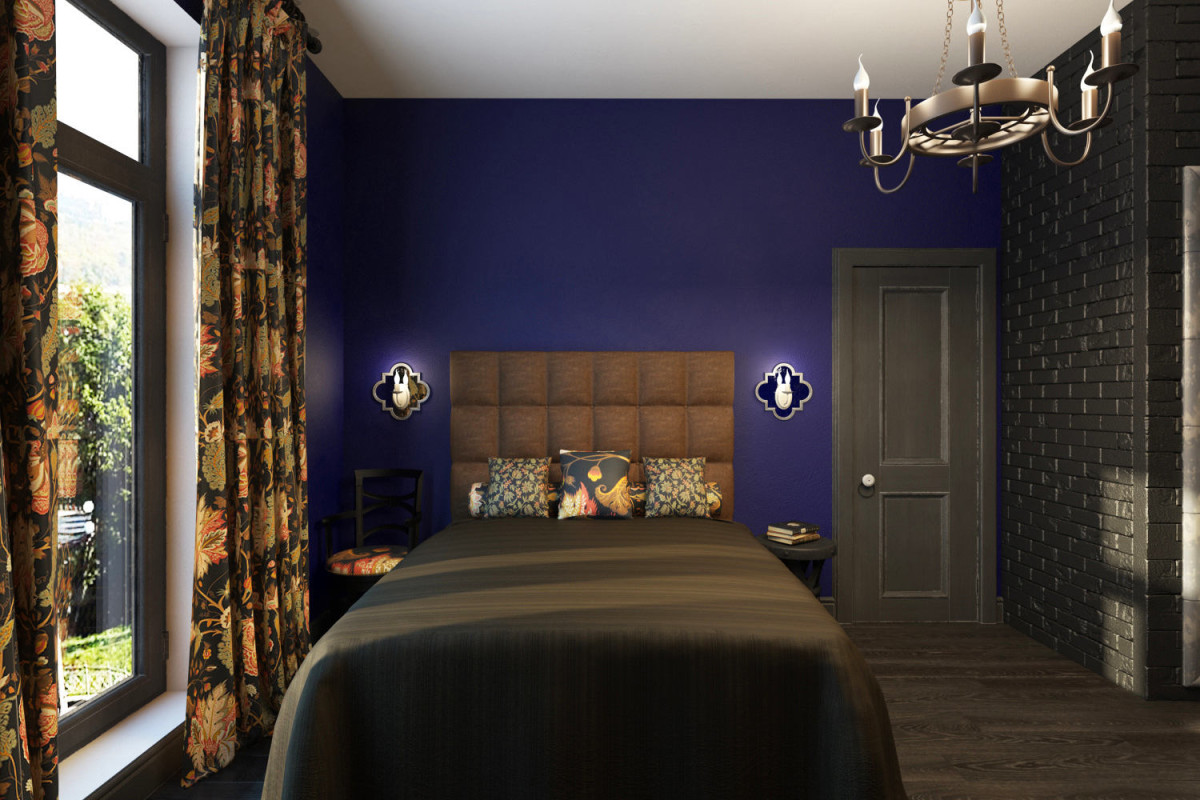 How to style an apartment as a loft, but at the same timeto keep the comfort and warmth of the interior? As an example, we will show you a cool project, where there are not only brick walls and a fireplace, but also a huge number of unusual solutions. Which ones? You will find out now. When a young couple plans to move into their first large apartment after a rented one-room apartment, they, of course, want to do everything there perfectly. The customers of this project wanted to create a comfortable place where they could place a children's room for the future, find space for their book collection, sit together in front of a cozy fireplace with a glass of wine, or in the company of close friends. And in order to bring all their ideas about the ideal home to life, they turned to Smolenskayadesign for help, and that's what came of it. Ekaterina Smolenskaya, designer Co-owner and chief designer of Smolenskayadesign. Graduated from the Saratov Art School named after I. Bogolyubov (environment design), as well as the fashion school of Alexander Vasiliev. Ekaterina has been in the field of design for more than 10 years, for about 7 years she was engaged in textile decoration of interiors in her own studio ArtAccent, but gradually she began to feel that she was already cramped within the framework of textiles and moved on to interior design. Several years ago, she joined forces with Andrey Menzhulin, as a result of which the former studio was reorganized into the Smolenskayadesign company with a full cycle of design and interior design. smolenskayadesign.ru Andrey Menzhulin, project manager Co-owner and project manager of the Smolenskayadesign company. Graduated from MADI (State Technical University), department of Bridges and Transport Tunnels. He started working as a foreman of a construction team, where he became interested in designing apartments and houses. As Andrei himself says, he was inspired to design by renovations in his own apartment, it all started with cosmetics and ended with redevelopment and global repairs. So, in fact, there was a desire to create. smolenskayadesign.ru

Dreams of customers and features of redevelopment

The apartment was sold with an open plan.There was only one load-bearing wall separating the corridor, so everything was done from scratch, of course, taking into account the wet areas. The designers decided to make functional zoning for three main premises, based on the wishes of the customers. The young couple wanted to see their interior warm, with a vintage touch. According to the layout, there was a request to allocate a bedroom and a future nursery to isolated rooms, and leave the living-dining-kitchen space open. It was also quite unusual for our time to wish not to make a TV set in the living room, but to leave it only in the bedroom, and then not particularly focusing on “this black spot”. And the couple asked for a library - also, unfortunately, a rarity today. 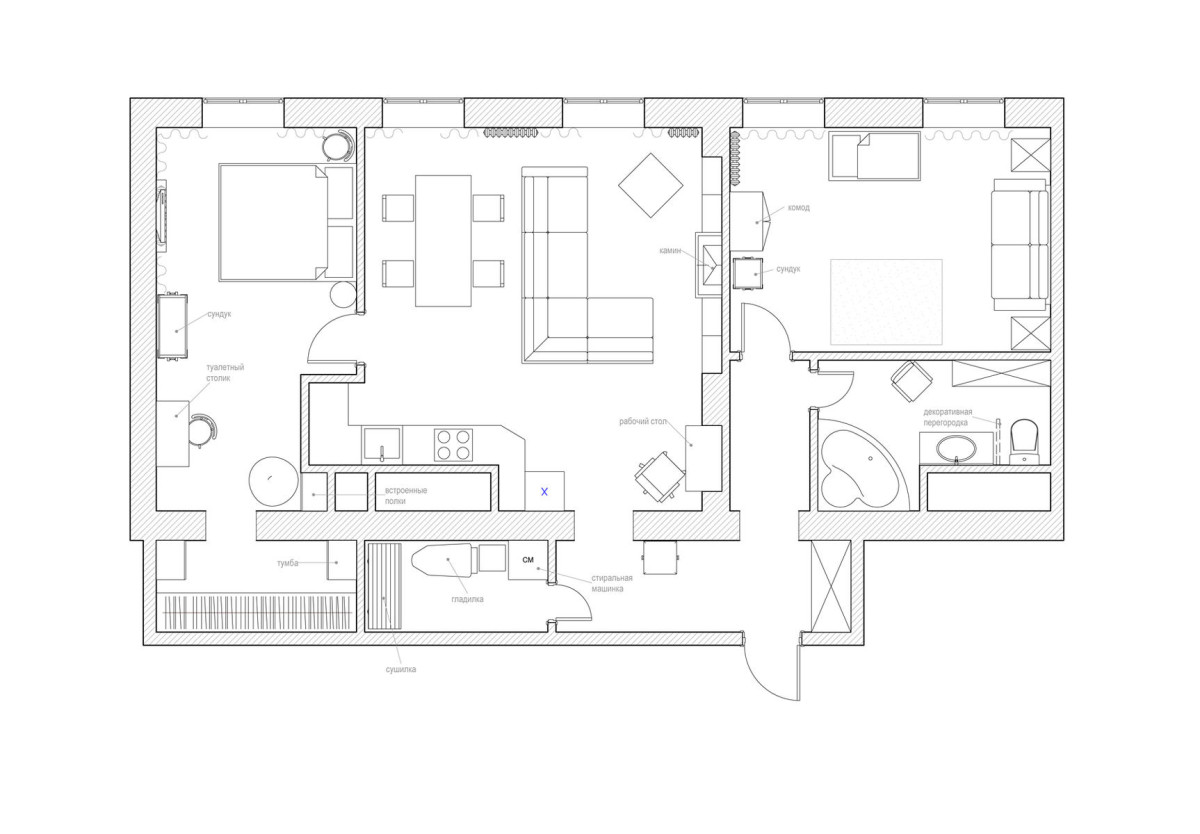 Loft with all shades of blue

He was chosen together with the customers, he wasnumber was dictated by the house itself - this is a former Stalinist administrative building, now reconstructed and externally decorated with a light touch of the loft style. The color scheme is partly due to the chosen style - natural wood, concrete-colored tiles. The designers diluted and refreshed the typical loft finish with a splash of blue, which turned out to be so close to the spouses. They used different saturations of this color, moving from one room to another: deep blue in the bedroom, heavenly airy blue in the nursery and a unifying tone in the living room. Andrey Menzhulin, project manager: - The ceiling was dealt with as simply as possible, since according to the wishes and the project no decorations were envisaged, it was simply painted. The walls are partly made using the decorative plaster technique, and in some places are faced with brick-like tiles. Unfortunately, there was no way to scrape the walls to brick on this project due to the complete absence of these walls. In the living-dining-kitchen + corridor area, they decided to use porcelain stoneware as the flooring. Firstly, this is the most wear-prone area, and customers also expressed a desire to make the coating as resistant to outdoor shoes as possible, since they do not plan to "shoe" guests at the entrance (even if the guests are not so frequent and numerous). In the bedroom and in the nursery, a warmer and more comfortable flooring was chosen - parquet board. smolenskayadesign.ru 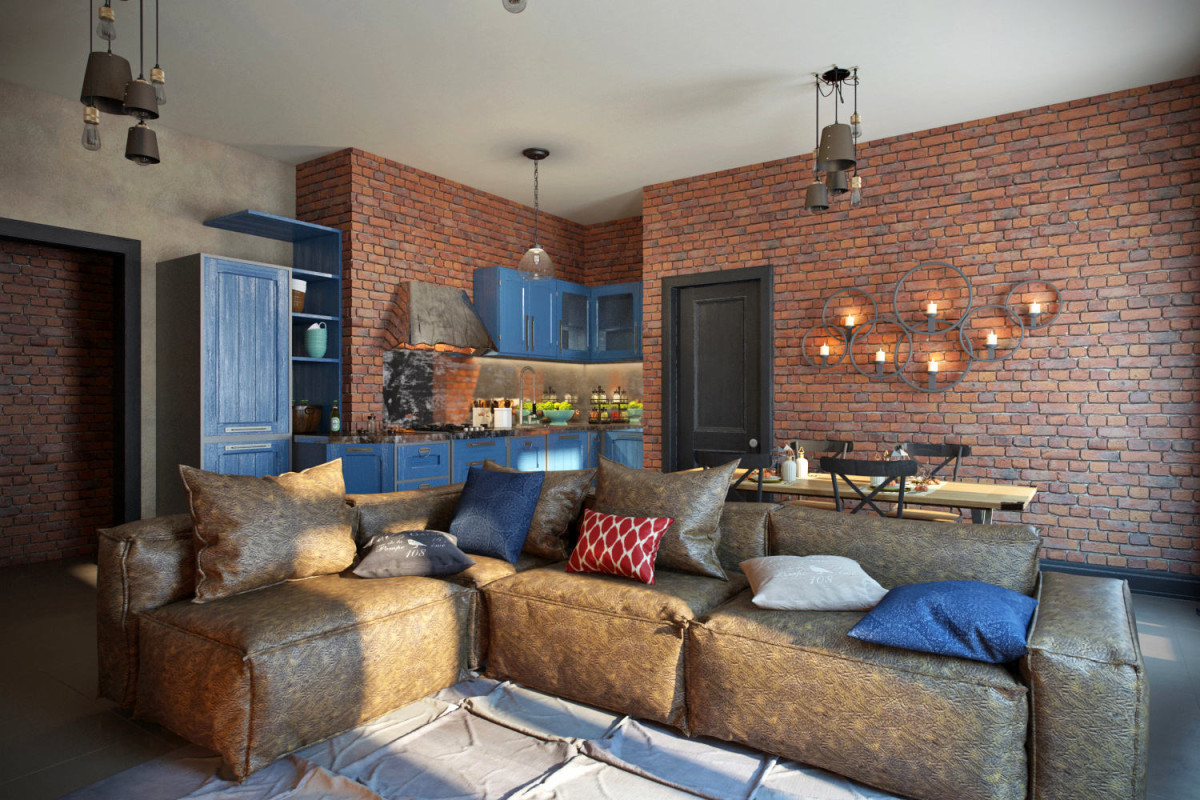 The fireplace became the center of the living area, as well as walls withred brick effect. Despite the fact that this is just a biofireplace, it looks very dignified both from an aesthetic point of view, and from the side of the unique, mesmerizing atmosphere of fire. The fireplace is framed by an imposing bookcase that takes up the entire space from floor to ceiling, but so that it does not seem too bulky, it was decided to drown it in. Ekaterina Smolenskaya, designer: - Our customers are very fond of reading real paper books, so the space of the bookshelves will definitely not be empty. The wardrobe is made to order according to our sketch, including forged elements in the corners of the shelves. A book, hot mulled wine, an unusually soft sofa upholstered in shabby leather, a winter evening - I hope we managed to fully realize the wishes of our customers regarding the recreation area. smolenskayadesign.ru 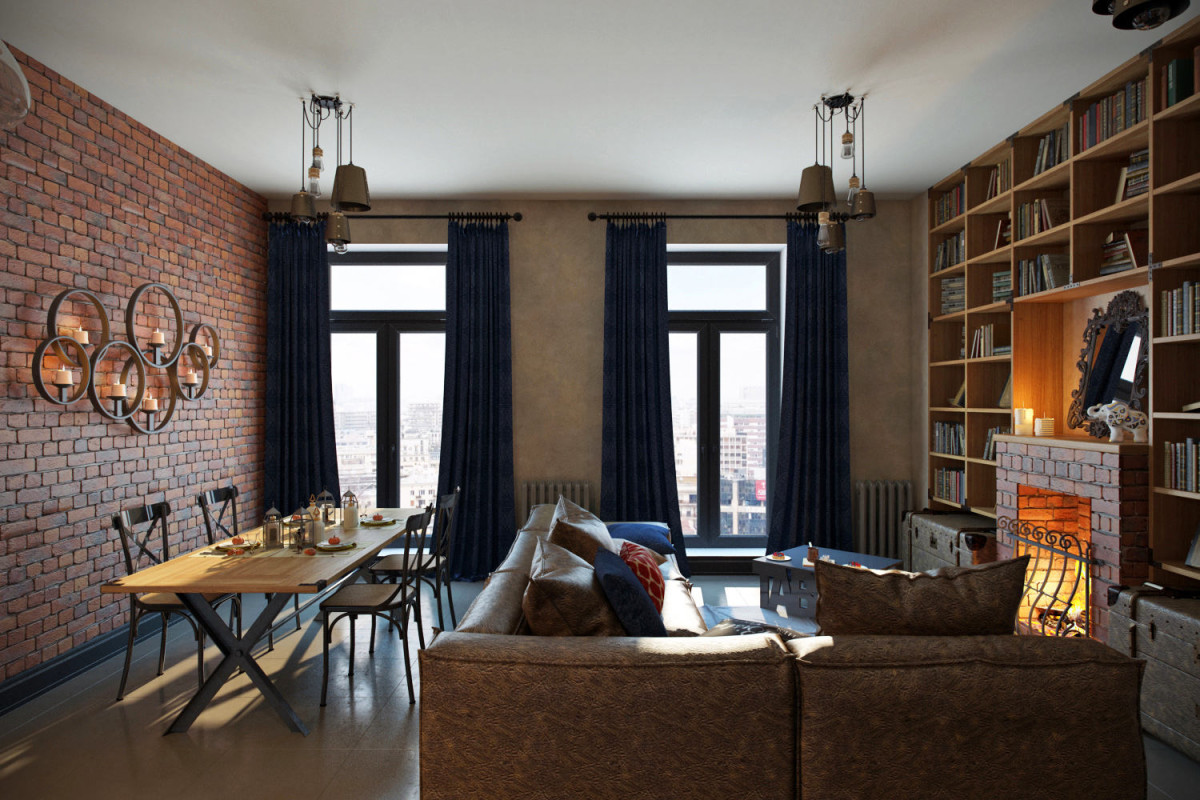 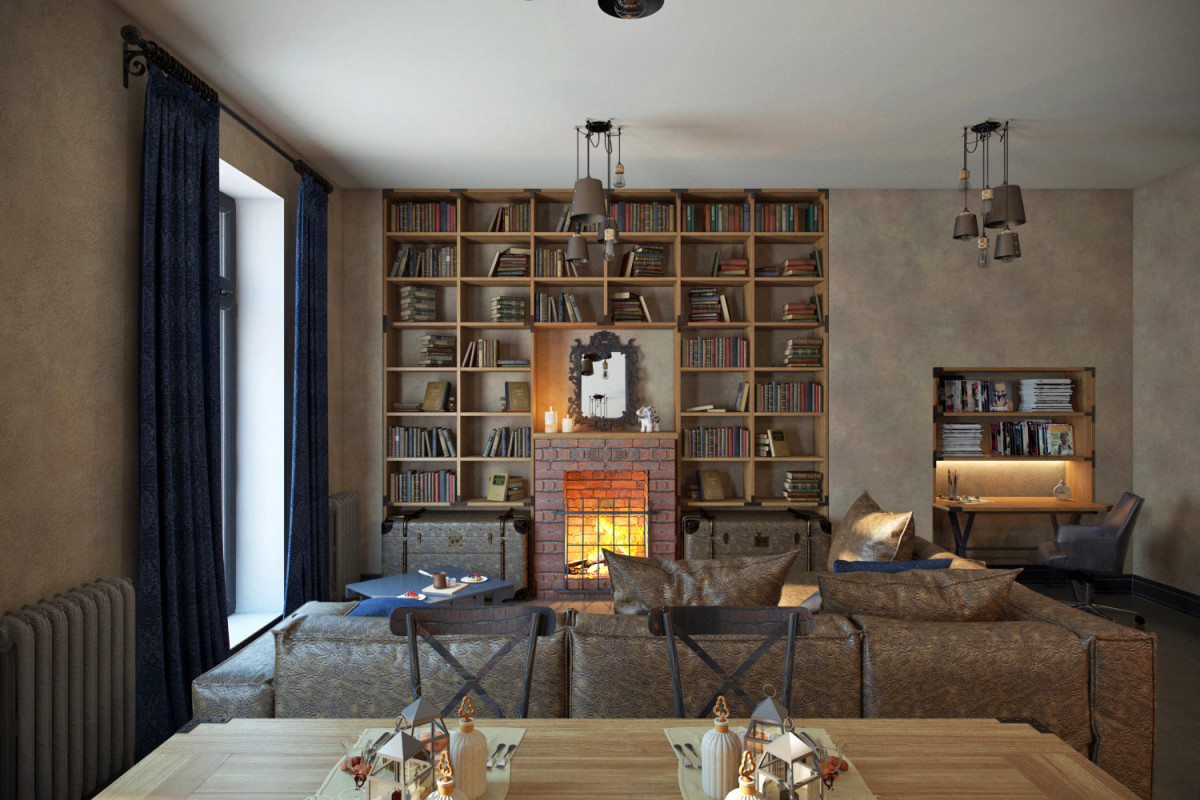 Particularly noteworthy is the blue kitchen fromsolid wood, complemented by metal elements. The work surface is unusual in execution - it is made of cement with a special coating. A sheet steel hood looks incredibly impressive, which perfectly maintains the spirit of the loft. Despite its vintage look, the headset's specifications meet modern needs. Ekaterina Smolenskaya, designer: - The kitchen set is made by the Marchi Group, which specializes in vintage models. I just fell in love with this copy when I saw it at last year's iSaloni show. It's nice that the customers shared my delight, and now this kitchen will decorate their interior. smolenskayadesign.ru According to the layout, the room turned out to be quiteelongated, but this is not without reason: the door was specially made in the center so that it visually divides the room into two parts - the bedroom itself and the dressing area with a large mirror and a dressing table. The wall of the dressing room is decorated with unusual decor, composed of miniature aged mirrors, made according to a sketch by Ekaterina Smolenskaya. Nearby there was a place for a small bookcase (it is recessed into the wall) - for the most beloved and dear books. Andrey Menzhulin, project manager:- The sleeping area is located by the window, and so that on weekends you can get enough sleep without worrying about the rays of the sun making its way into the room, the curtains are provided with a special opaque lining. The headboard of the bed was decided to be made to order from the leather upholstery similar to the sofa. At the headboard there are sconces that support the shape of the mirrored decor of the dressing room. Since the clients asked not to focus too much on the TV, the following solution was invented for it - an imitation of a window. In the open state of the curtains, you can watch TV, and if you close them, then visually we just see a curtained window. smolenskayadesign.ru With thoughts of the future

After some discussion, it was finally decidedto combine the nursery with the general style of the apartment by means of brickwork, but it was softened with white. In addition to this, in the lower part of the wall they covered with furniture so that in the future the child, playing near the walls, would not get hurt (after all, a brick is not a perfectly smooth surface). The designers decided not to litter the room at this stage, because the future owner will surely have their own preferences. Also, for the future, a small teaching moment has been introduced in the form of an alphabet on the wall, which is also a decor. Ekaterina Smolenskaya, designer: - Since the children's room is being made for the future, we did not begin to introduce clear signs of a "boy-girl", but tried to make it as neutral in this sense as possible, we allocated two windows for this room so that the child has a lot of daytime Sveta. smolenskayadesign.ru All rooms have ceilinglamps, the "chandelier in the center" option was chosen only for the nursery. In the living room and kitchen, the ceiling lighting is divided into separate zones: a sofa group, a dining table, a kitchen area, a work area; above the bed and in the dressing area in the bedroom. In the living room, in each of the four described zones, there is additional lighting - work in the kitchen and at the desk, soft lighting as a fireplace and candles in the sofa and dining areas. The bedroom also has a sconce above the bed for reading. In the nursery there will be additional sockets for redevelopment into a more adult nursery, but for now this is a room "for the future", so they decided not to be smart with lighting. 5 tips from Ekaterina Smolenskaya for those who want to stylize an apartment for loft:

The loft itself is eclectic enough,since initially his people were creative and unusual. Premises that are exempted by factories and plants were very cheap, and they were mainly occupied by artists - combining an apartment and a workshop. At all times, the artists were not rich, but they had imagination and ingenuity, so in these interiors were combined completely different at first glance things - an old sofa (which could well be found in the trash) and pipes of factory communications. Here are some tips that you should take into service if you want to turn your apartment into a loft: